If you missed yesterday’s post, start there to find my recap of the Beneath the Sea dive show and a full explanation of why I traversed the globe to attend it!

As I’ve mentioned previously, one of my major accomplishments this year was winning a grant from the Women Diver’s Hall of Fame. The story goes full circle from the Beneath the Sea dive show in 2011, when I found out about the hall of fame and the grants and scholarships they offer, all the way to Beneath the Sea 2012, where I became an associate member and accepted the WDHOF Advanced Dive Training Grant.

Way back on that cold March weekend in 2011 I was buzzing with excitement as I walked the floor of the expo center. I was a few months away from graduating and starting my travels and I felt like I had the entire world ahead of me. This was when I stumbled on the booth for the Women Diver’s Hall of Fame, an organization dedicated to honoring and raining awareness of the contributions of outstanding women divers. At the same time I was introduced to some of their inspiring members and also found out about the opportunities they provide with their scholarships and training grants. 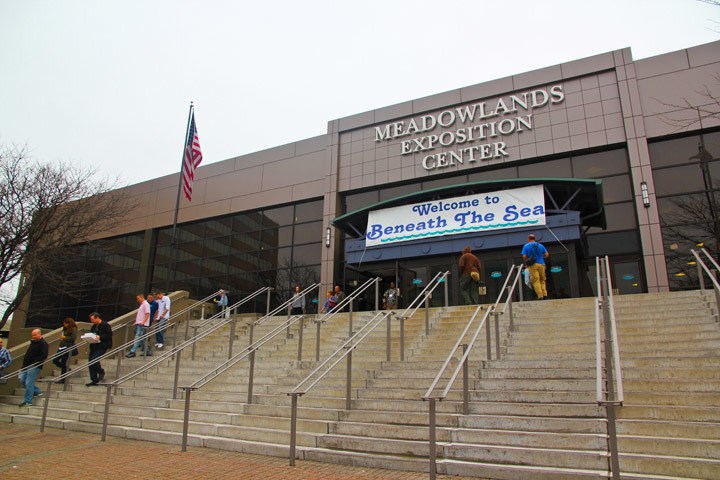 Diving and underwater video and all other wonderful things I had daydreamed about back at Beneath the Sea were pushed to the back of my mind for a few months while I went through a hellish few months finishing school, working multiple jobs to save for my trip, selling my belongings and moving out of New York, and generally preparing to uproot my life completely. Life blissfully slowed down a bit in June when I arrived in Scotland and had time to focus on my goals and passions again. While applying for a writing competition I remembered the diving scholarships I had learned about.

While looking through the 13 grants and scholarships available I immediately honed in on the WDHOF Hugh Fletcher Memorial Training Grant to Assist the Disabled to Dive for Mark (men are eligible for many of the scholarships/grants). It seemed like it had been written for him — Mark is an ex-Royal Marine and always expressed an interest in using his diving career to do some good in the world, such as helping injured servicemen and other people with disabilities experience the freedom that diving can bring.

Being much less settled into a diving career (as in, I didn’t really have one), I didn’t really see a slam-dunk perfect fit for me. There was one grant that seemed ambiguous enough — a grant for “a deserving woman diver who wishes to further her dive education beyond the basic certification level.” Well, that was me. I was (and still am) at the Rescue Diver level and was (and still am!) planning to become a Divemaster. So I figured I would throw my hat into the ring as well. 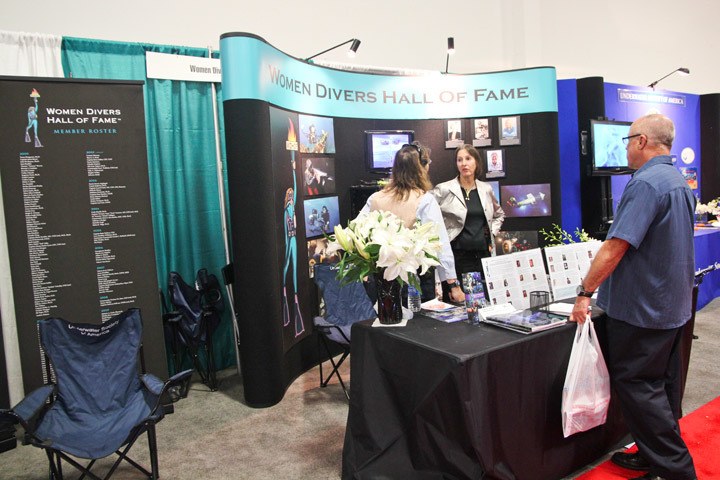 We quickly realized this wasn’t an application process we could leave until the last-minute. At this point we were living in Thailand and application packages were due on November 15th and included detailed resumes and working histories, multiple references, and most daunting, in-depth personal essays explaining our statements of intent and why we were deserving of the Hall of Fame’s resources!

We worked on our application on and off starting in October and tried to finish them before embarking on a six-week trip through Cambodia and Vietnam but of course found ourselves holed in a hotel room in Saigon in mid-November frantically editing essays and polishing off resumes. As we hit send, I had mixed emotions. On one hand, I truly felt that there was no way Mark wouldn’t win as I couldn’t imagine a person more qualified. His story is personal and I don’t know if he would be comfortable with me sharing it here, but I will simply say that between his background, impressing diving career, and personal connection to the cause I had a hard time believing that anyone reading his essay wouldn’t be moved to tears. I believed he deserved the grant and that he would win.

On the other hand, I felt pretty ambiguous about my own application, even wondering if I had wasted my time. The grant seemed so open-ended that I was sure there would be tons of applicants, I didn’t see anything that made me uniquely qualified, and I basically admitted in my essay that I spent the first 19 years of my life terrified of the ocean thanks to an obsession with the movie Jaws. Um, yes, please give me tons of money now.

Back in Thailand life had settled back down and I was sitting on my porch going through my morning emails when I saw a message pop up in my inbox from the Women Diver’s Hall of Fame.

Congratulations!  We are pleased to inform you that you have been selected as the recipient of a the 2011-2012 Women Divers Hall of Fame Advanced Dive Training Grant!

I read the message a few times, letting it sink in. As I had been so pessimistic about my chances I was equal parts shocked and elated. I did experience a moment of sadness, though, as I weighed the odds of both Mark and I winning. I called him at work and told him to check his email, trying to remain casual. When he called me back moments later I could hear the excitement in his voice before he told me and I practically screeched into the phone that I had won as well. That night we had drinks on the beach and toasted to our success. It was such a happy time. 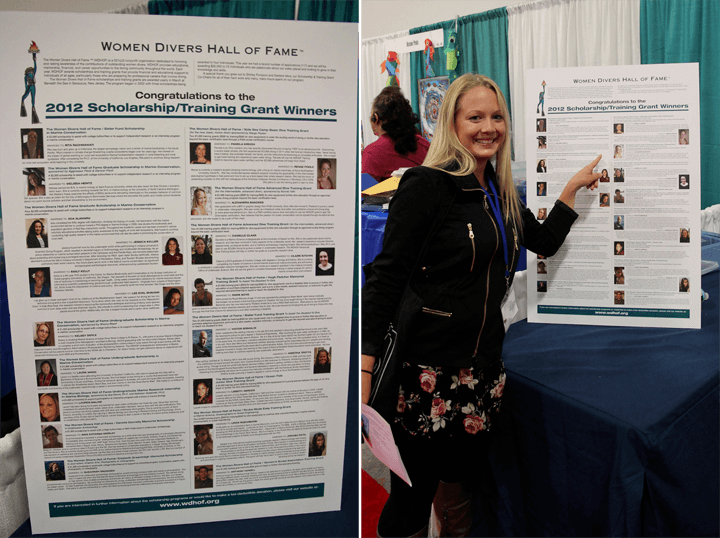 As I said, it all came full circle at Beneath the Sea, which I made a trip home in order to attend. Unfortunately Mark couldn’t make it so I went to represent both of us at the Women Diver’s Hall of Fame awards ceremony. On Saturday I had great fun walking around the show with my scholarship winner badge, which even earned me a congratulations from award-winning underwater photographer Michael Aw. Sunday was the big day of the awards ceremony brunch and I was joined by my cheerleading squad, my Dad and little sister. 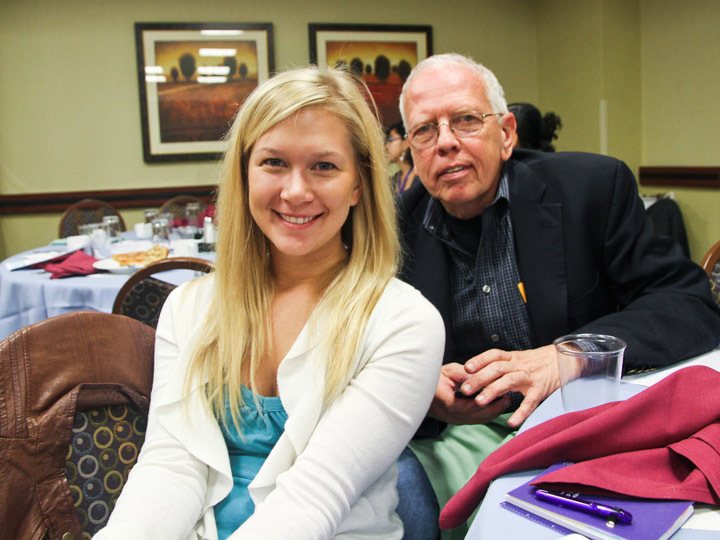 The brunch was not just to award scholarships and grants but also to honor the new inductees into the Women Diver’s Hall of Fame. The women being honored were incredibly inspiring- one of them had begun diving before women had the right to vote! The Hall of Fame is made up of pioneers, field-leaders and record-setters in every facet of the diving industry from marine biology to free diving, from dive training to underwater photography. The exclusive member’s list is now made up of 157 women from 28 states and 10 different countries. At this point I can only hope and speculate as to what role diving will have in my life as a whole, but I know things will have gone very, very well is I were ever luck enough to find myself honored here again someday as a member. 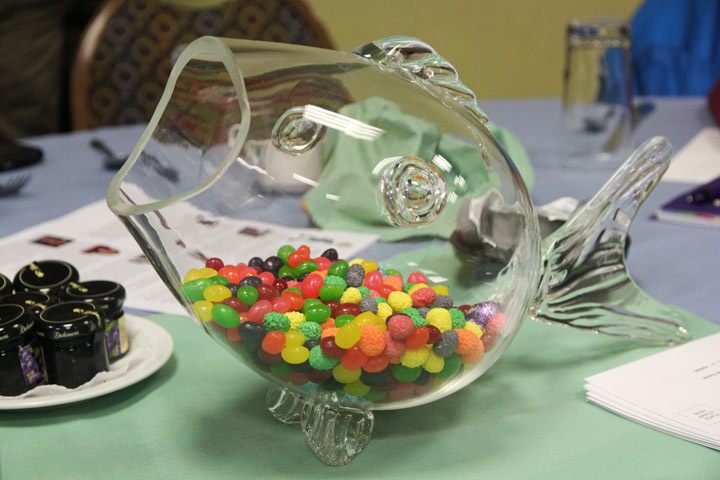 It was a great day and wonderful not only to accept my award but to meet the women who made it possible. It is not dramatic or an overstatement to say that I was in the room with women who have paved the way to making a career in diving such a viable option for me and young women everywhere. 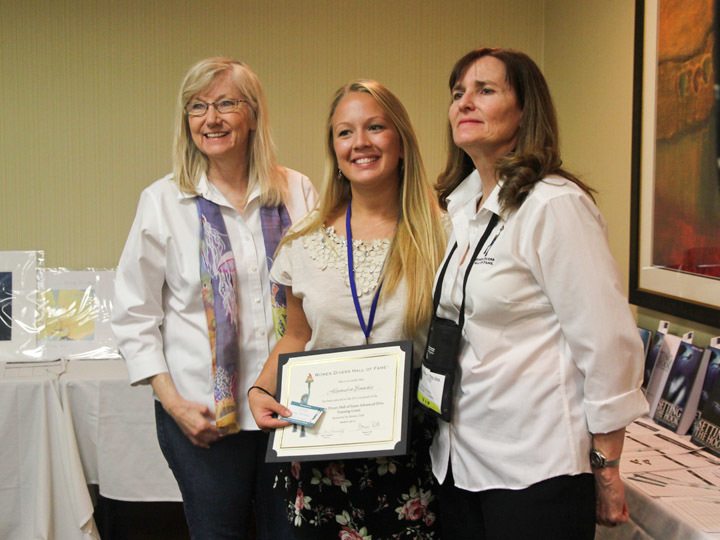 I am so grateful that I was able to take advantage of this great opportunity that I didn’t know existed a year ago! I encourage anyone passionate about diving, especially young people (many scholarships are exclusive to those in high school and college), to seek out similar resources. Recently I have learned of diving scholarships  available from the Women Diver’s Hall of Fame, from the Beneath the Sea Foundation, from Boston Sea Rovers, and from the World Underwater Scholarship Society.  I’m sure there are many more available for those willing to do a little digging. 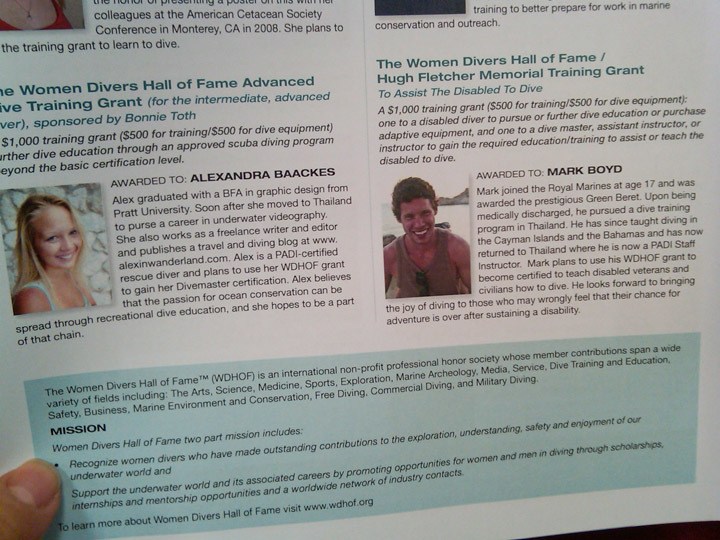 Now comes the fun part… putting my grant to use! I already used the equipment portion of the grant to purchase a shiny new BCD and dive computer (my first non-used dive equipment purchase!) and I will be using the training portion to pursue my Divemaster training, and need to do so before April of 2013 when it expires. That means I have some big decisions to make, namely where I would like to spend three months of my life training to become a dive professional! But that’s a post for another day. 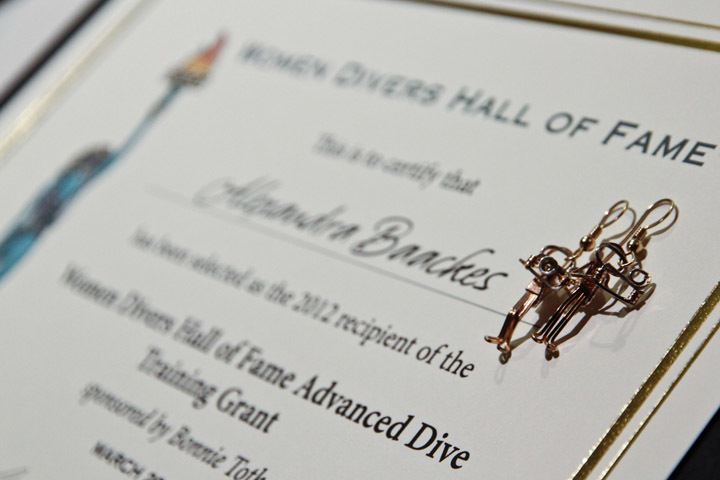 These earrings, a gift from my dad, were a major hit!

I’d like to leave you with a portion of the essay that I submitted with my winning application, and thank the Women Diver’s Hall of Fame for this wonderful honor and opportunity. I look forward to making them proud!

My philosophy, based on my personal journey with diving, is that only exposure to the sea (such as through diving) can lead to a personal investment in the future of our oceans. And only a personal investment, and a passion, can lead to the kind of personal changes that people need to make to support conservation. I truly believe that by taking someone diving and educating them on the fact that without change their children might not be able to see the sights they just did, we can lead that person to change their personal actions in ways like giving up single use plastics or eating over-fished species.

I want to be a part of that chain of action. I want to be the divemaster, or someday the instructor, who gets to show people the beautiful underwater worlds that are at stake, and pass on to them my infectious love of diving. I then want to use my communication skills and graphic design degree to educate- both face to face to my students and through my website to a greater audience- about why we need to act and how each person can help.

It’s a lofty goal, indeed, to change the world through what is an occasional hobby for most. But I truly believe that it is possible, and with the WDHOF Advanced Dive Training Grant I could help make it happen.

How to Vote in the US Election From Abroad

Conservation in the Keys

Beneath the Sea 2012 Recap Green Beer and Leprechaun Costumes
34 Comments...