A Different Kind of Dive: Going Under in the Atlantis Submarine

I heard a light hum and squinted at what appeared to be a large white whale surfacing in the distance. My eyes widened. This was no sea mammal — it was a submarine, and I was about to board. 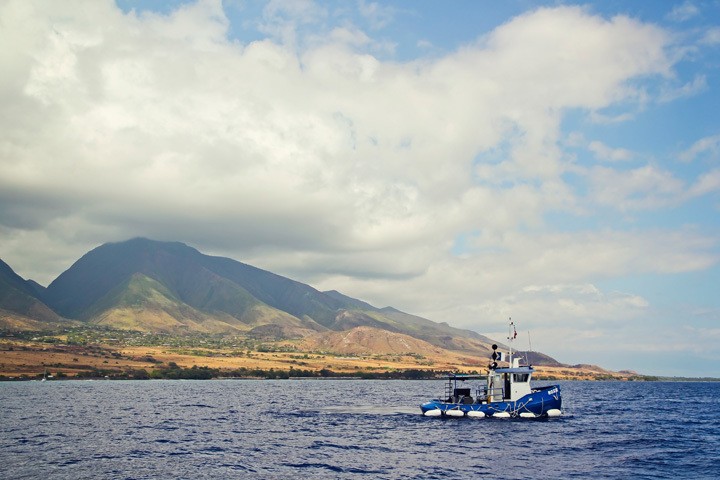 I’m always surprised when non-divers tell me, “I could never do it, I’m too claustrophobic!” To be diving in the vast open ocean is the opposite of constricting, and I should know — I’m prone to bouts of claustrophobia myself. Which is why despite several opportunities I’ve never hopped into a tourist submarine on my travels. This trip to Maui however was full of plenty of firsts. I’d already reached crazy heights paragliding, why not go super deep in a submarine to balance things out?

Which is how I found myself adrift in the bay of West Maui, watching The Atlantis ascend to greet us. 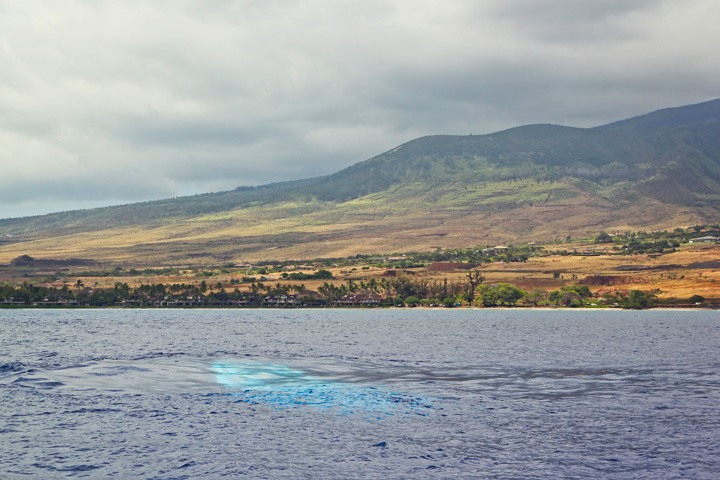 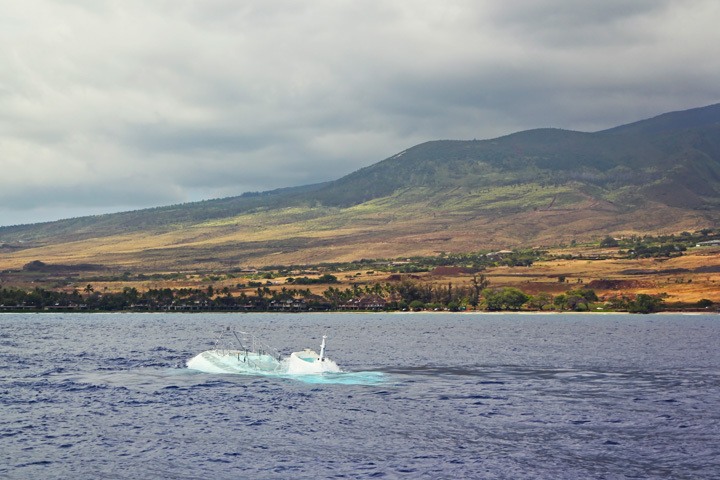 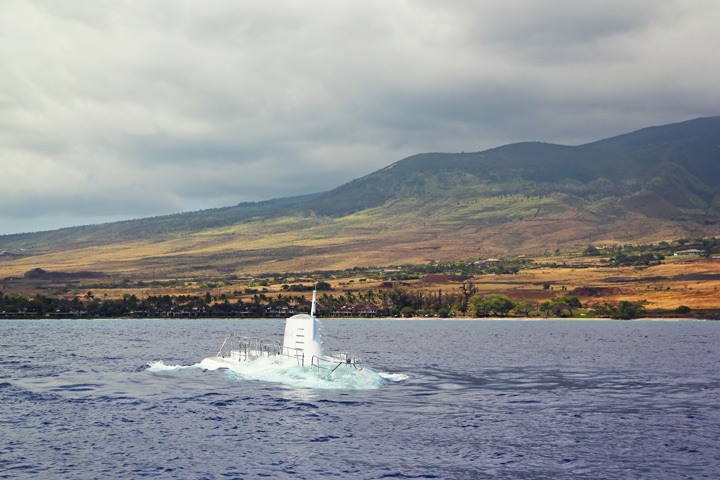 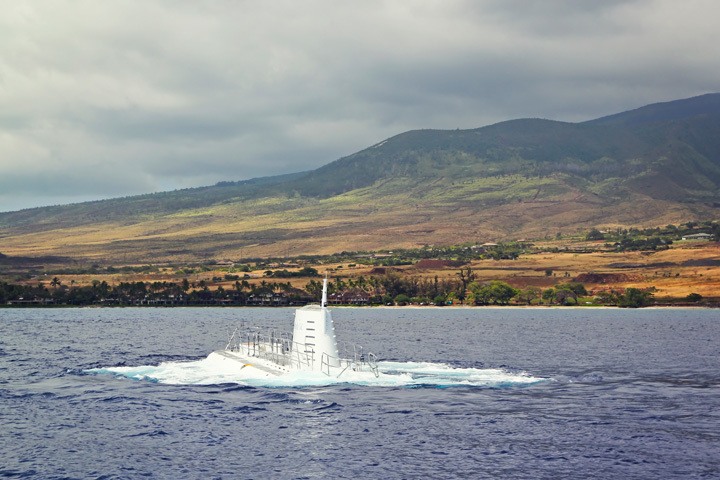 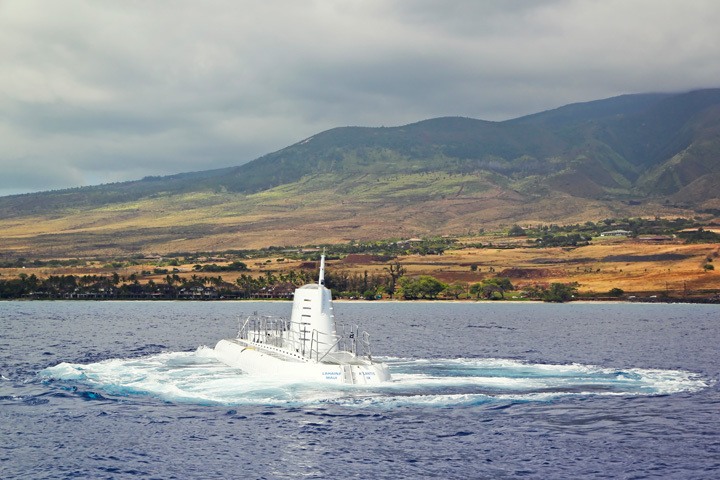 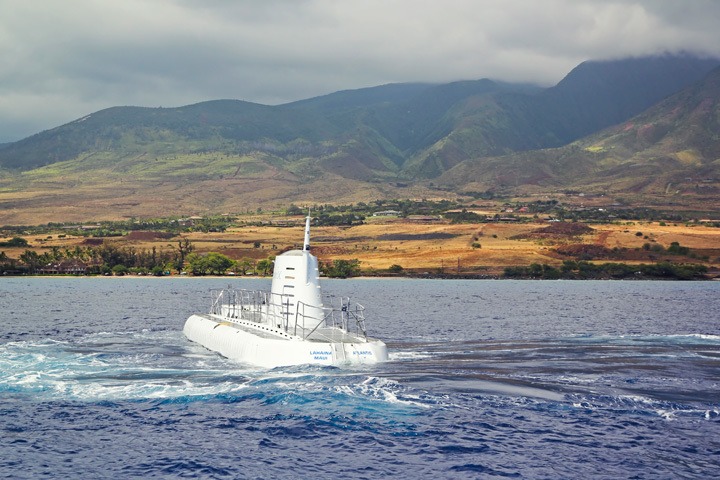 My partners on this mission were the lovely Pete and Dalene of Hecktic Travels — and our forty five fellow passengers, of course. Luck was on our side. As they boarded us by seating area we were the last ones into the sub, which landed us the best seats in the house, right behind the captain.

I found that that extra bit of breathing room being seated on the end helped abate any anxiety I had about the experience. Though I admit I did take a few deep breaths as the hatch closed. 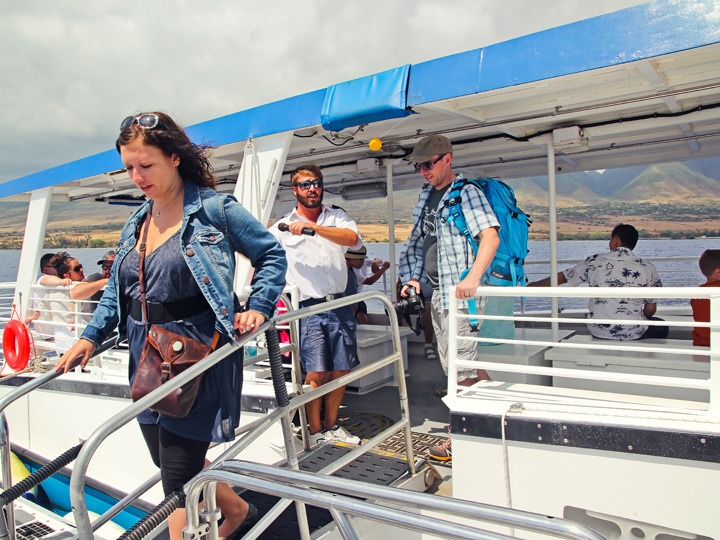 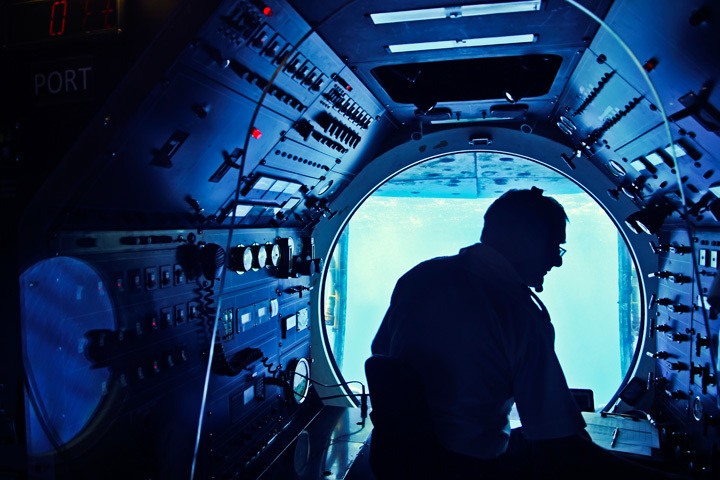 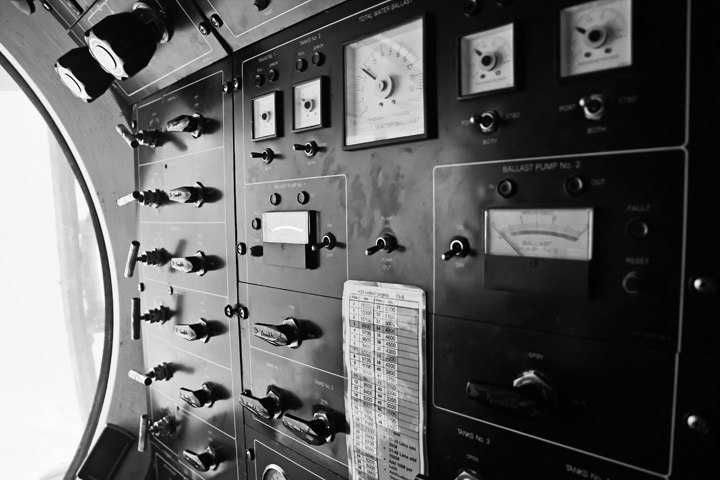 I laughed at myself when I saw the controls and thought, “Wow, it’s a real submarine!” I guess I was expecting a toy? Between the guide’s commentary we were able to chat with the captain and he even invited us up to take photos from the front at one point. I was impressed. It might be full of tourists but this is no simulation — it’s a full on submarine experience.

As we began our descent I stared out into the blue somewhat skeptically. Having just went for two fabulous scuba dives, I wondered if this one could live up. 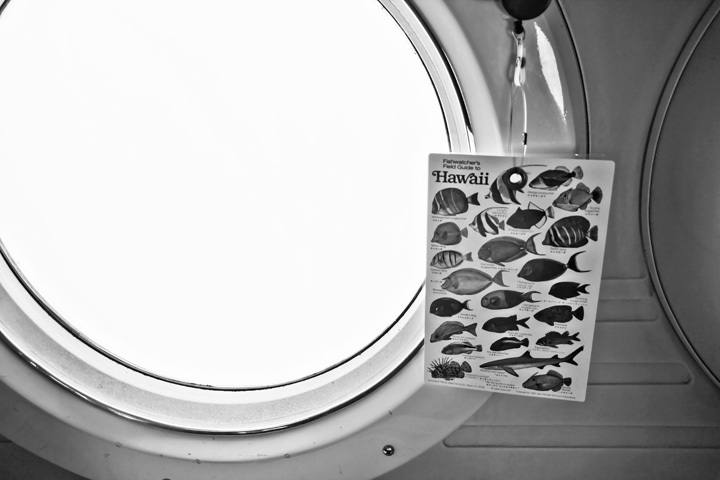 We were on our way around Twin Peak Dive site. I have to give the guide credit. I know he’s probably made the same jokes a billion times and has them down to a science, but damn if I didn’t laugh. My favorite gag? “My Heart Will Go On” pouring out of the loudspeakers as we descended upon a shipwreck.

But I’m getting ahead of myself. First, there were fish. And coral. And one frustrated blogger trying to take pictures that had a hue other than blue in them. 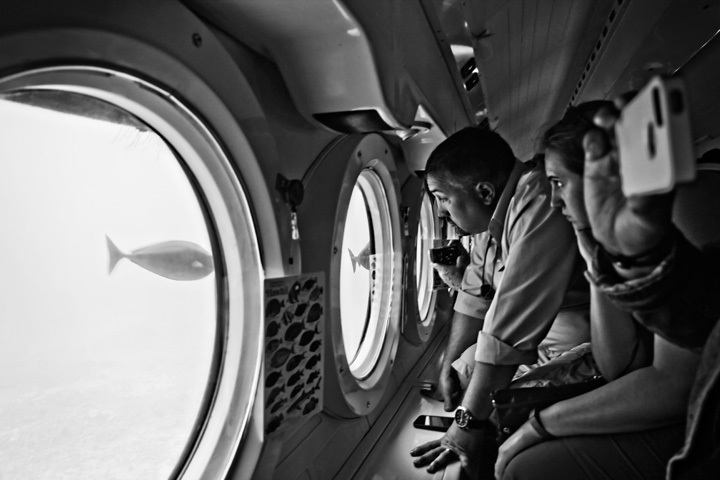 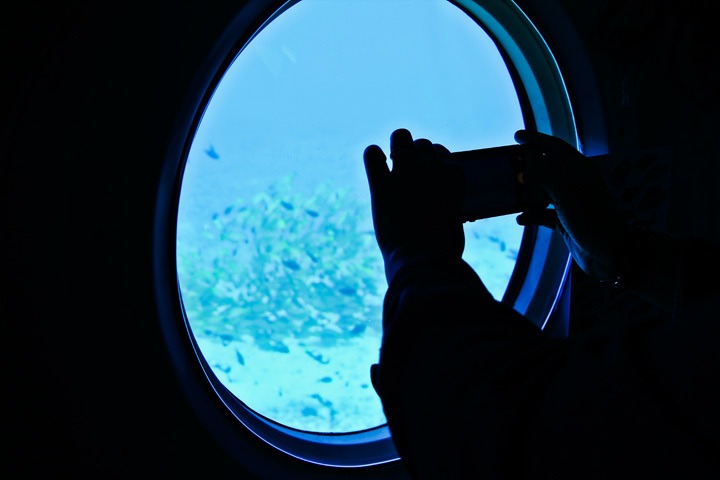 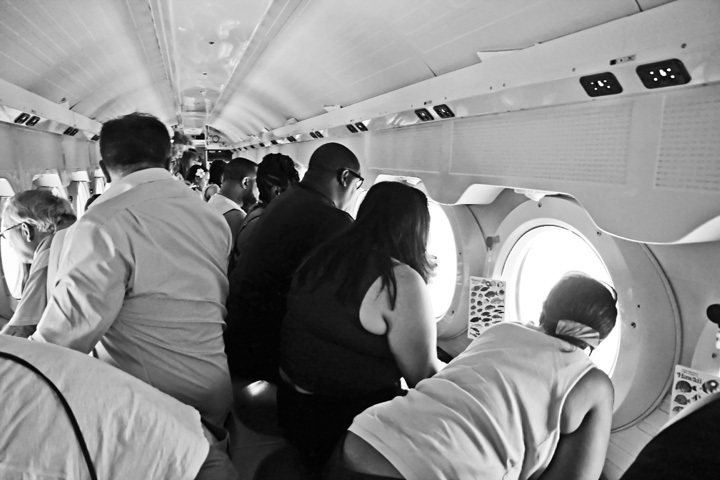 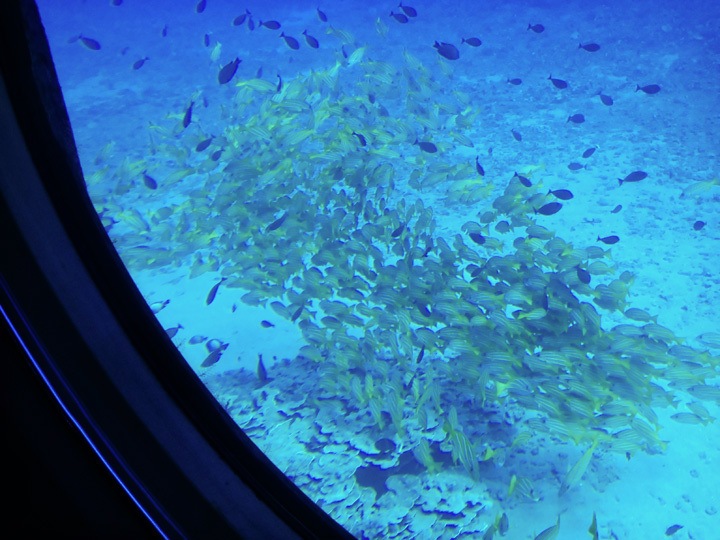 And then there was the Carthaginian. Purposefully sunk in 2005 as an artificial reef, we had front row seats to this popular dive site. It was beautifully framed by the submarine portholes and I appreciated that the captain drove us by twice, making sure both sides of the sub got equal views of everything. 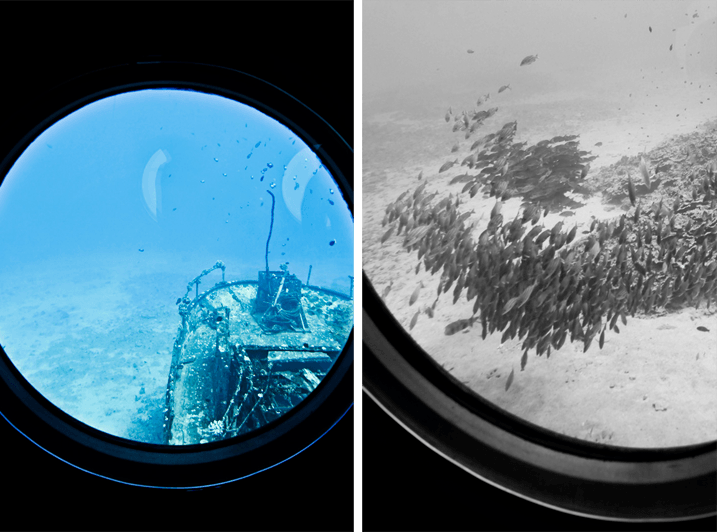 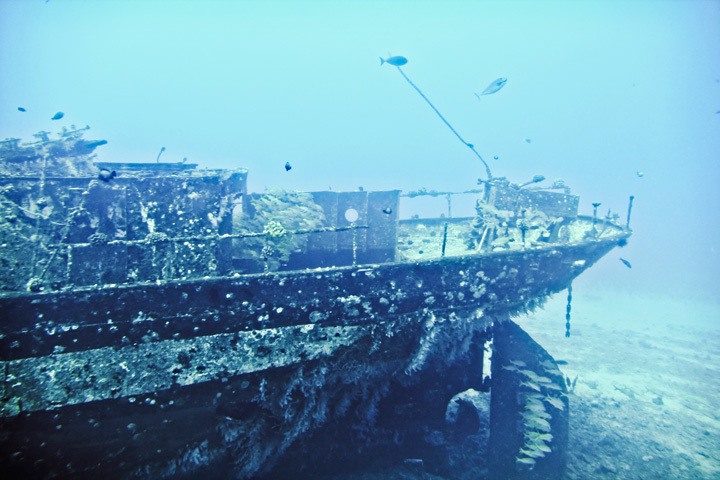 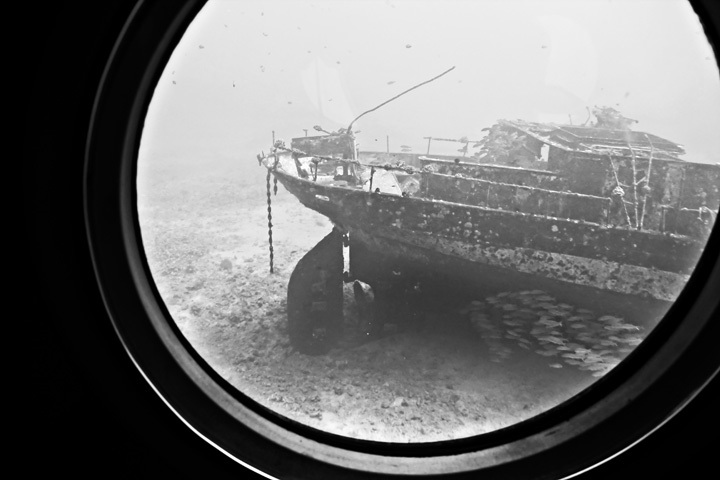 When we reached our deepest depth, 130 ft, the guide pointed out the depth gauge so we all could ooh and ahh — and take pictures, of course. But I was way more impressed by what was about to happen next. I was concentrating on taking a picture of something completely unmemorable when I heard Pete exclaiming something excitedly from the captain’s area. “Hmmm?” I replied, and jumped out of my seat at the reply.

“EAGLE RAYS!” I cried, fumbling with my camera while admiring what would be a rare and celebrated sighting for any scuba diver. They were out of my view before I could compose anything framable, but the memory was picture perfect. 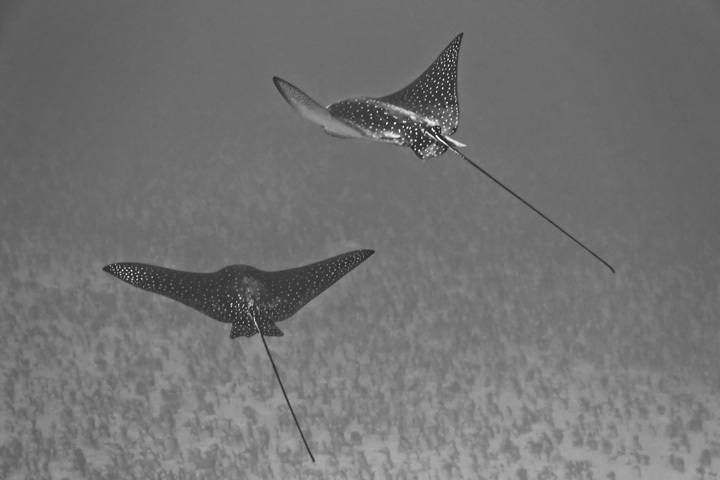 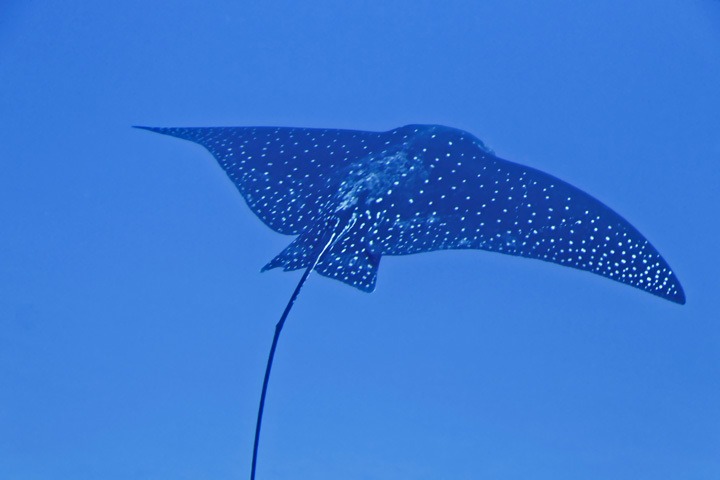 With a final sighting of a sleeping nurse shark rounding out the trip, it was time to head back to dry land. Am I going to turn in my scuba gear any time soon in favor of subs? Heck no. But I loved marveling at the technology and engineering of the submarine experience, and the wreck and the rays were pretty amazing bonuses. 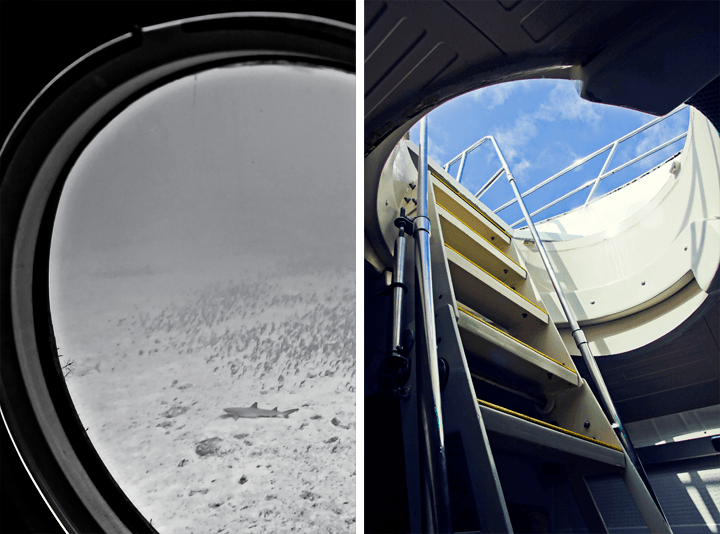 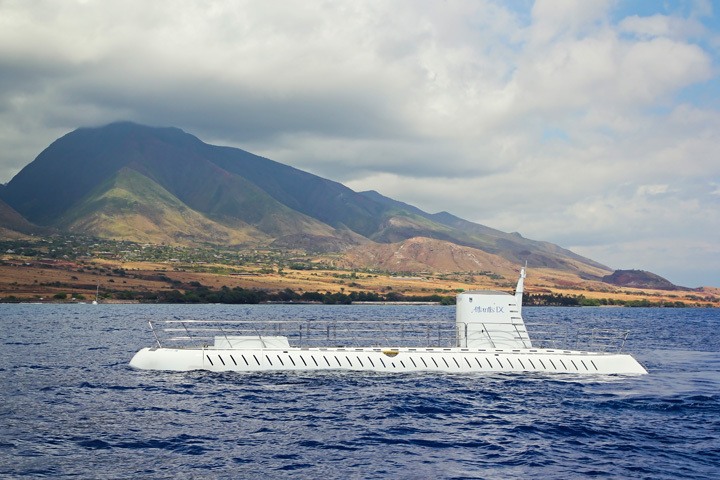 Have you ever been in a submarine? Would you?

Many thanks to the Maui Visitors Bureau and to Atlantis Submarine for hosting me and showing me so much aloha. As always, you receive my honest opinions regardless of who is footing the bill.

Lucky Kentucky: Crossing The Border To My Twentieth State

Inside My Bag: Hawaii Getting More out of Maui: Volunteering and Giving Back
40 Comments...