Mardi Gras, Out of Season

My first trip to New Orleans was for Mardi Gras, a move that many locals recommend avoiding. But I have no regrets — it was an amazing experience. In fact, when I returned for my second trip, I was feeling a little nostalgic for all the colorful chaos. That, combined with the fact that it was one of the only tourist attractions my resident sister had yet to check off her local bucket list, is what led us to Mardi Gras World for a behind-the-scenes tour of the magic. 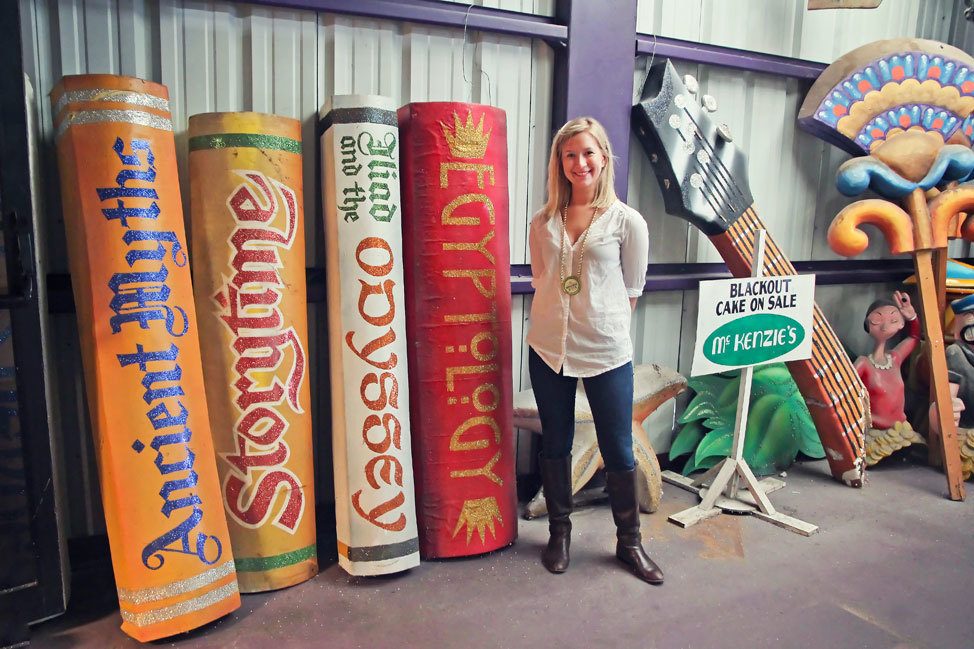 I won’t lie — our cheesy attraction alarms were on full blast when we pulled up at the nondescript warehouse on the outskirts of the city, and we arrived for the tour with arms skeptically crossed. And our eyebrows only raised higher when the first stop was to a dressing room full of kitschy costumes where we were instructed to take photos. I don’t know why this struck me as unappealing rather than amazing, like most dress up opportunities do, but it didn’t matter, because we skipped the whole thing to run back out to the parking lot and deal with the parking situation. Note to future New Orleans visitors: try to grab one of the free shuttles to and from the French Quarter if Mardi Gras World makes it onto your itinerary. The $10 fee for parking is kind of insulting considering the vast, multiple-football-fields-in-size empty lot it will be sitting in.

But back to the tour — we returned just in time to be ushered into our seats for a movie that turned out to be incredibly informative and interesting. I’d never taken much time to consider the history of Mardi Gras, and enjoyed a little peek into what’s behind all the beautiful traditions that makes it merry, not to mention the details of float construction and delicate parade logistics. Did you know that early floats were pulled by mules and build on the beds of old garbage trucks? 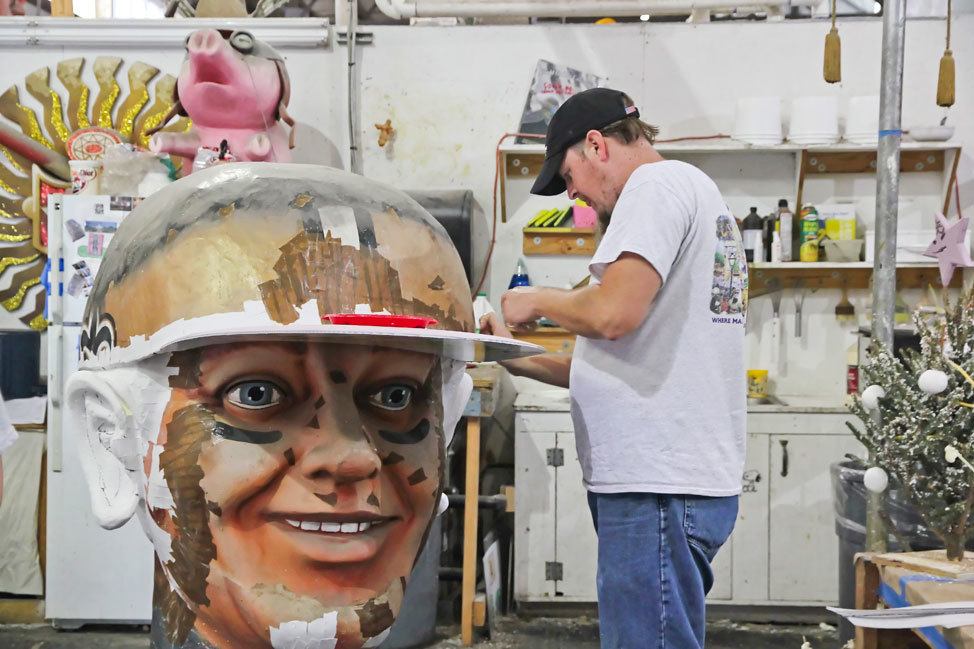 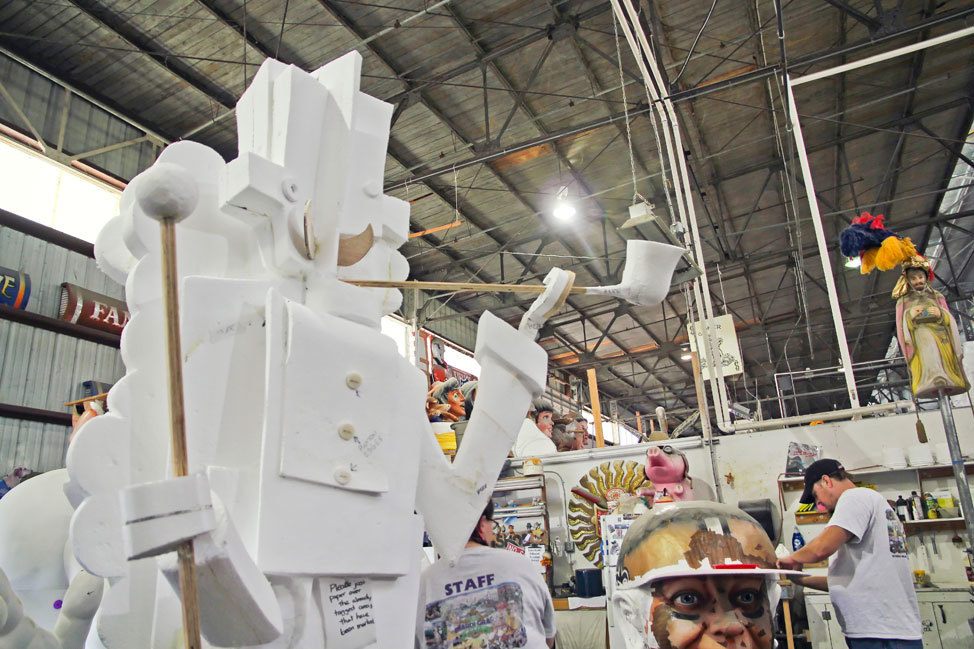 When the credits rolled and the lights flipped on, we were each given a piece of King Cake to sample — despite a week of Mardi Gras celebrations, it was my first time sampling the rainbow-hued dessert. I loved it. And then, we were unleashed into the warehouse.

This is where the tour, for me, took a turn for the fabulous. This was no storage space — it was a real, working art studio where the floats of Mardi Gras were coming to life just feet away from our camera shutters. I was amazed by how simple the construction was. I would have assumed every high tech method available was put into these incredible pieces of art — but nope, most were pretty basic paper maché affairs. 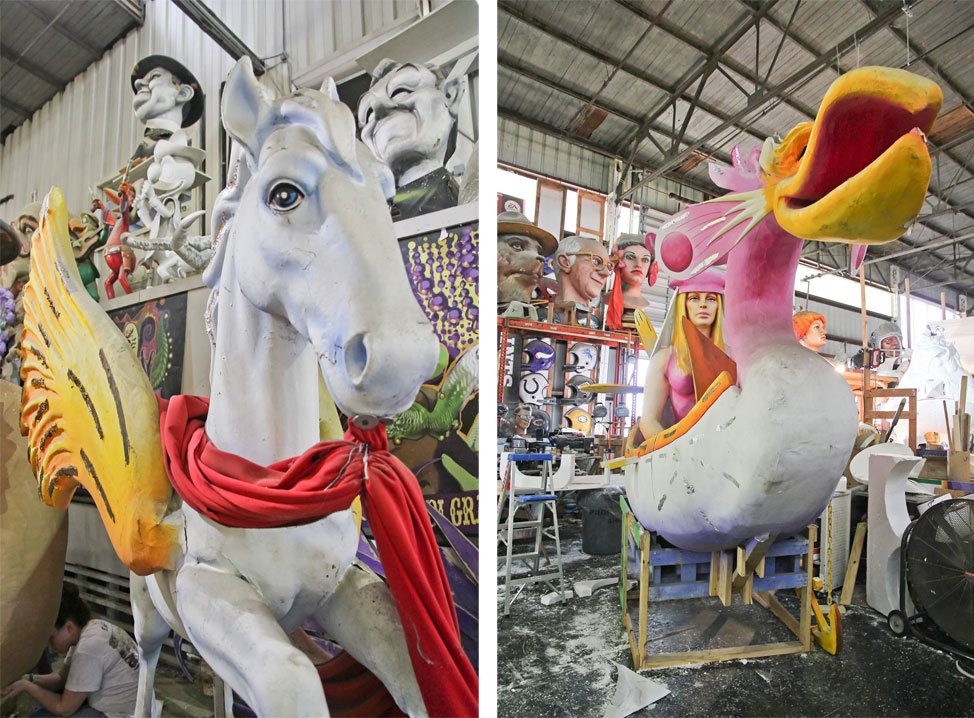 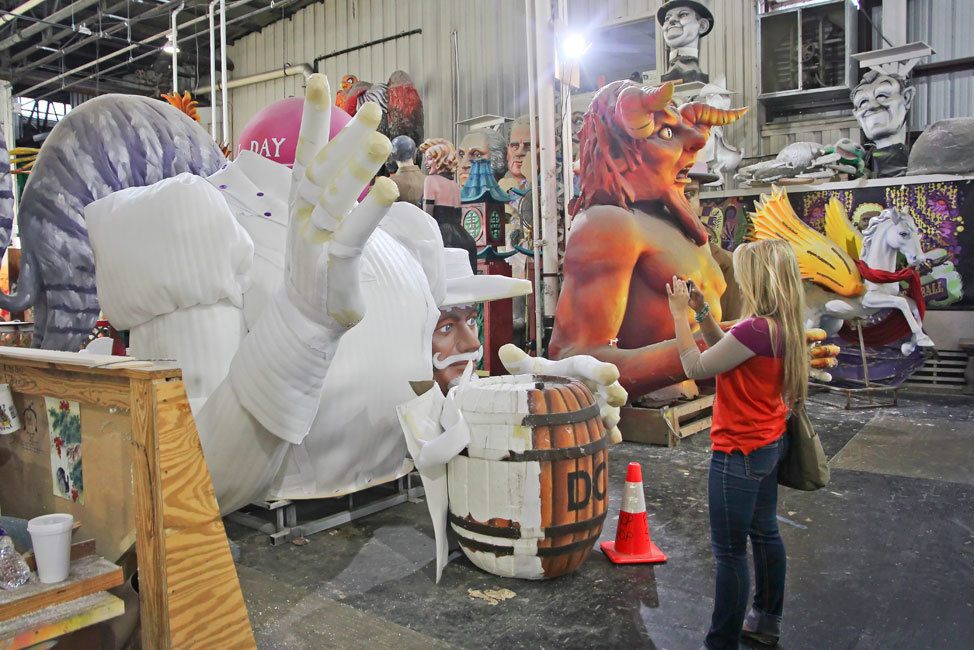 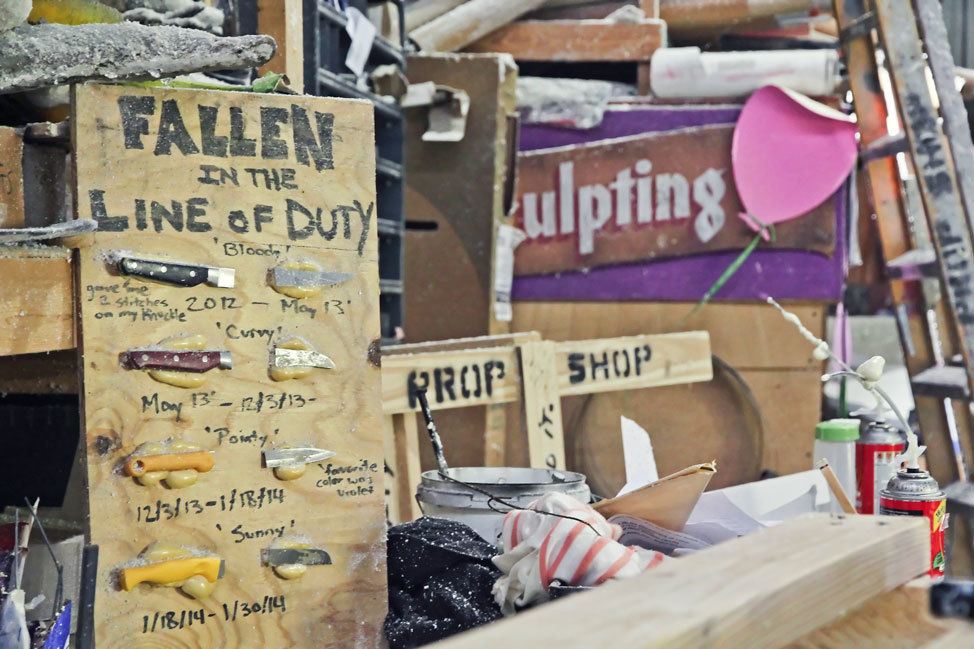 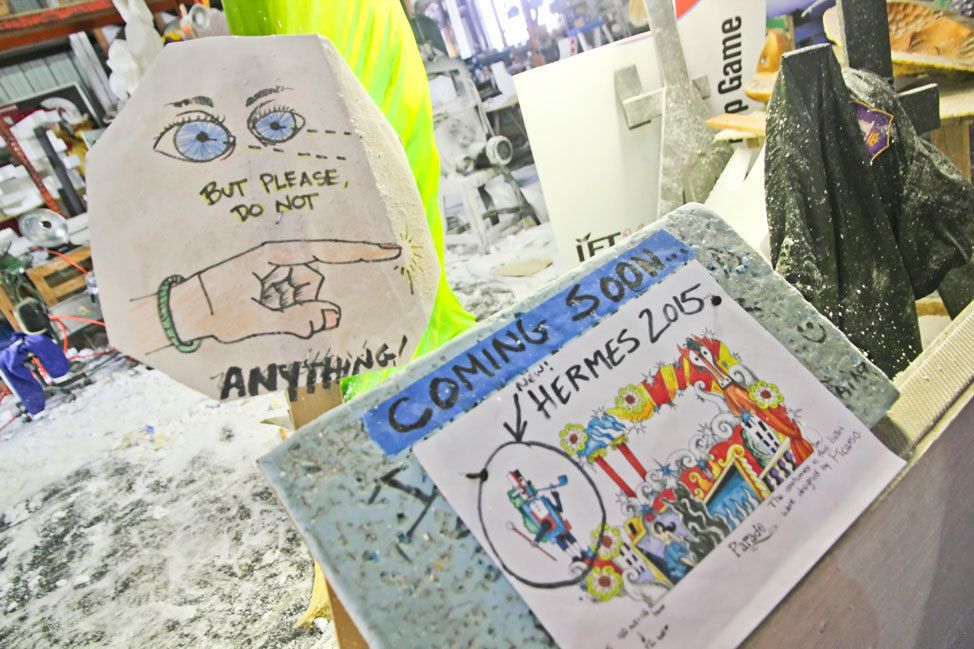 You could tell the artists that called this place their office were a humorous, fun-loving bunch. And as a former art school survivor myself, I loved that this place existed to create jobs for so many New Orleans creatives.

It seemed like we were catching the end of a busy workday, and the next tour, the last of the day, found the studio empty. If you want to make sure to see the artists at work, I’d recommend making it for one of the earlier tour times. 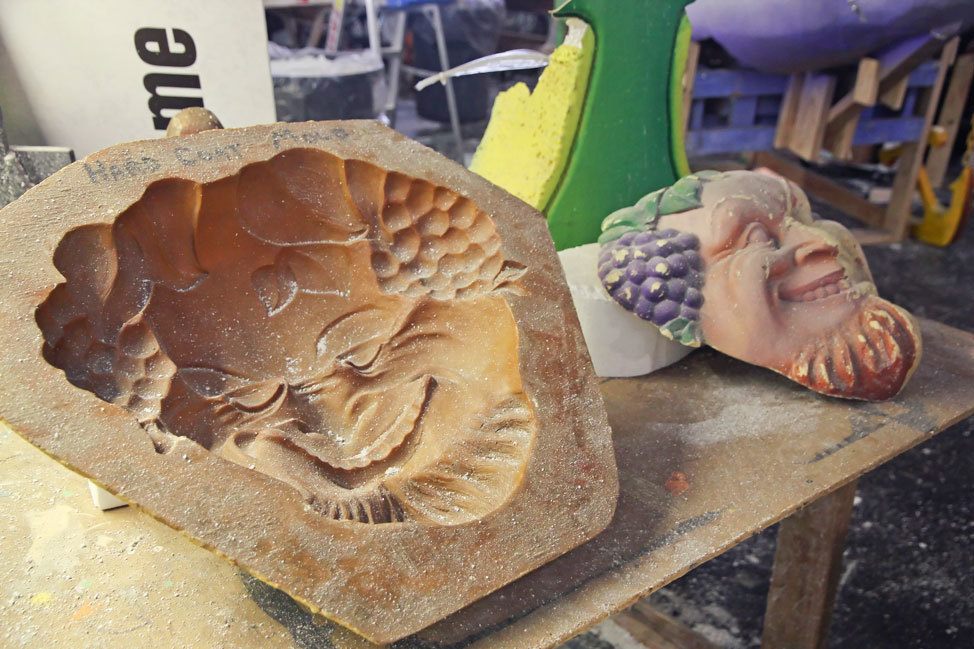 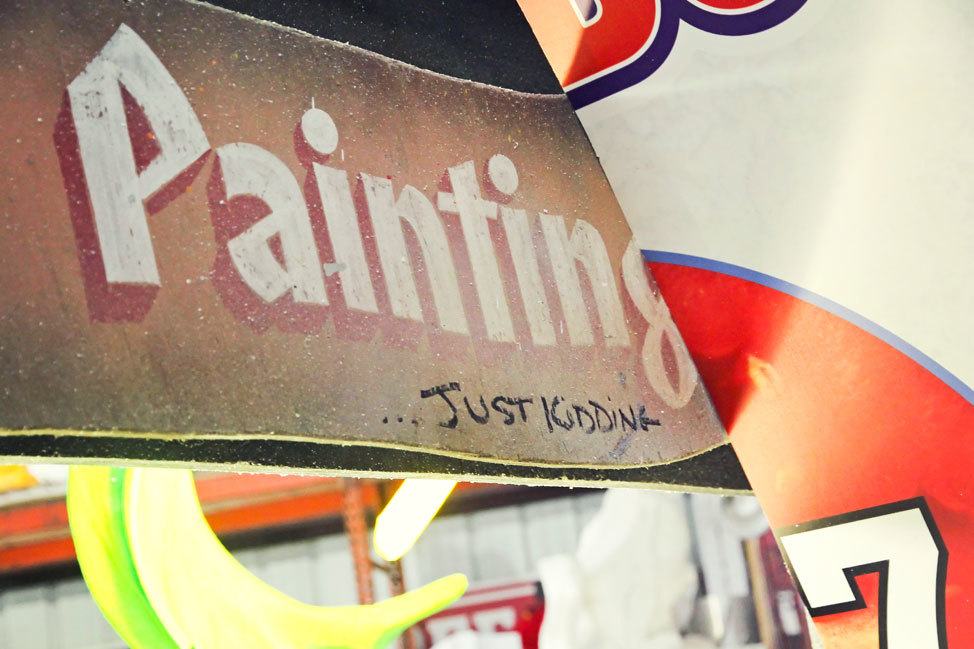 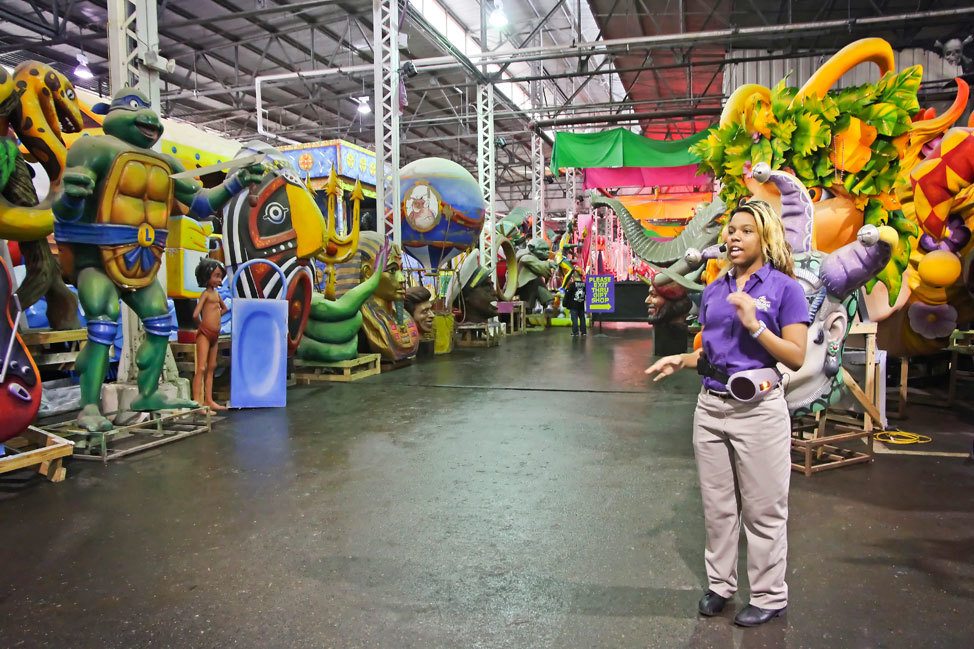 Eventually we moved on from the active studio area into a vast storage space for former float pieces, many of which would eventually be deconstructed and given new life. For example, while we were visiting, a planet was being stripped and repainted as a soccer ball.

One of my favorite parts of the tour was excitedly squeezing Olivia’s arm every time I recognized a component of a float from a parade we’d watched together. Our own inanimate version of spot-the-celebrity. The crazy part? This is just one of fifteen warehouses full of similar sculptures! 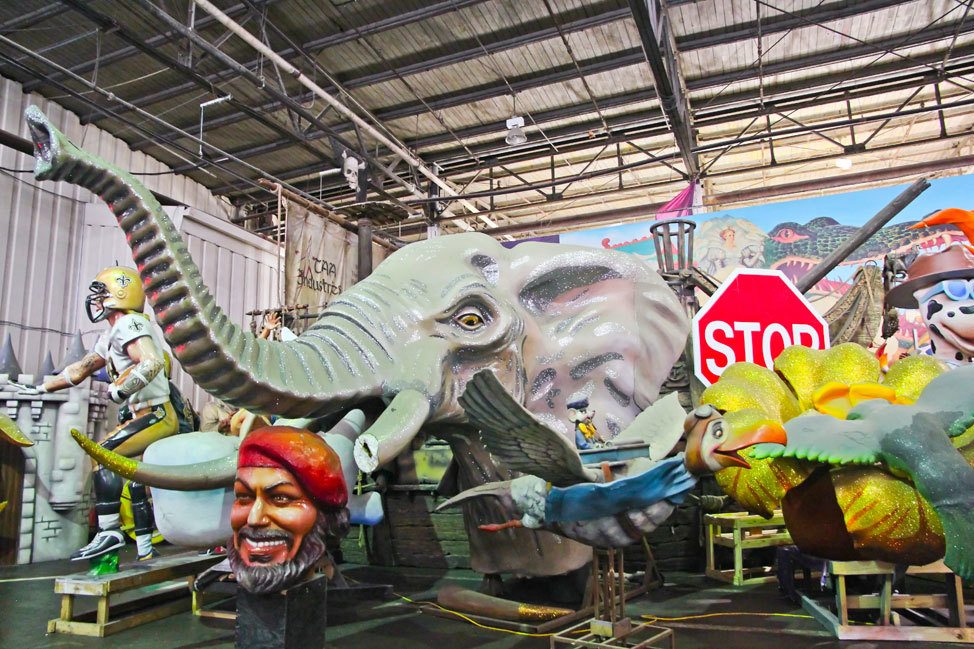 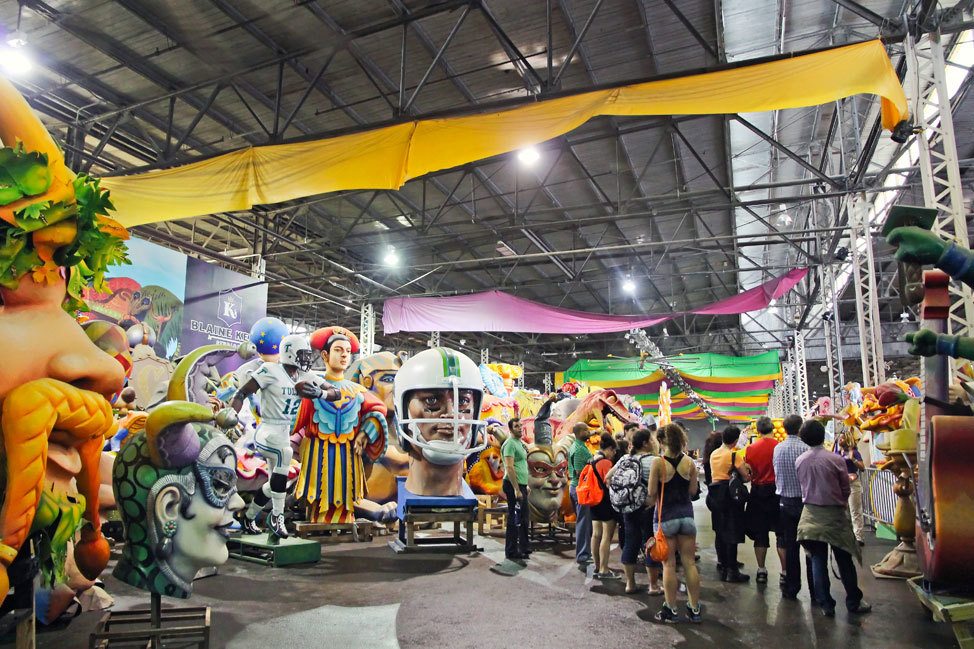 Our guide impressed me not just for her bottomless well of Mardi Gras-related knowledge but also for the impressive way she answered the bewildered questions of tour guests who just couldn’t quite grasp the spirit of the celebrations. “Krewes are non-profit organizations who’s aim is to spread joy and have fun,” she explained patiently, as the Midwestern tourists tried valiantly to get to the bottom of why New Orleans residents would willingly spend thousands of dollars simply to belong to a krewe and throw a massive party that celebrates… nothing! “It is a gift to the community,” she reasoned, trying a different angle.

It reminded me of similar attempts I’ve made to explain because we can events like Burning Man and The Mermaid Parade to skeptics. Yes, they are expensive. No, there is no religious significance. Yes, they are amazing. 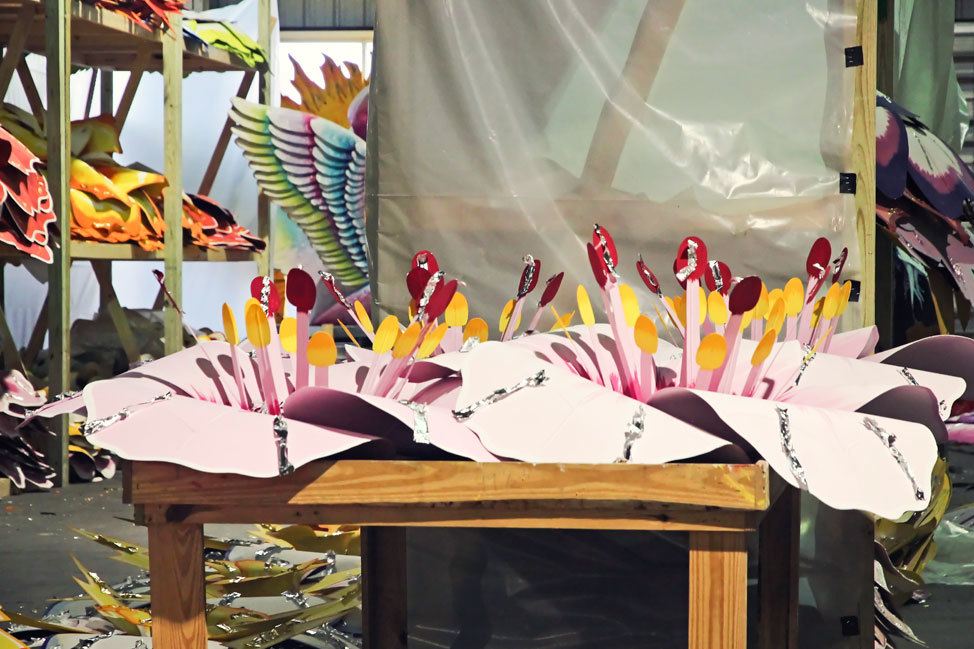 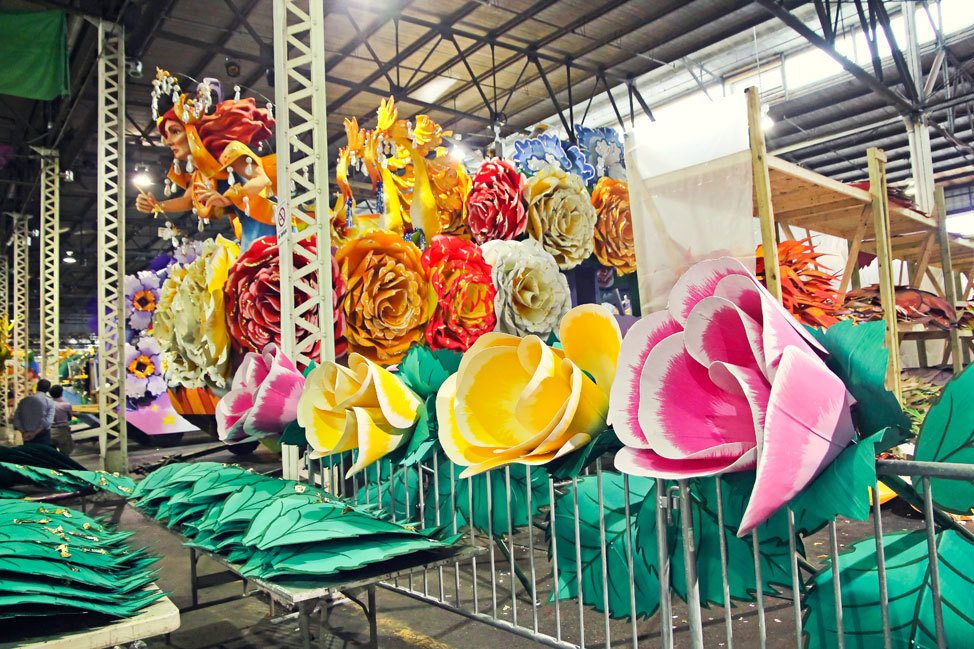 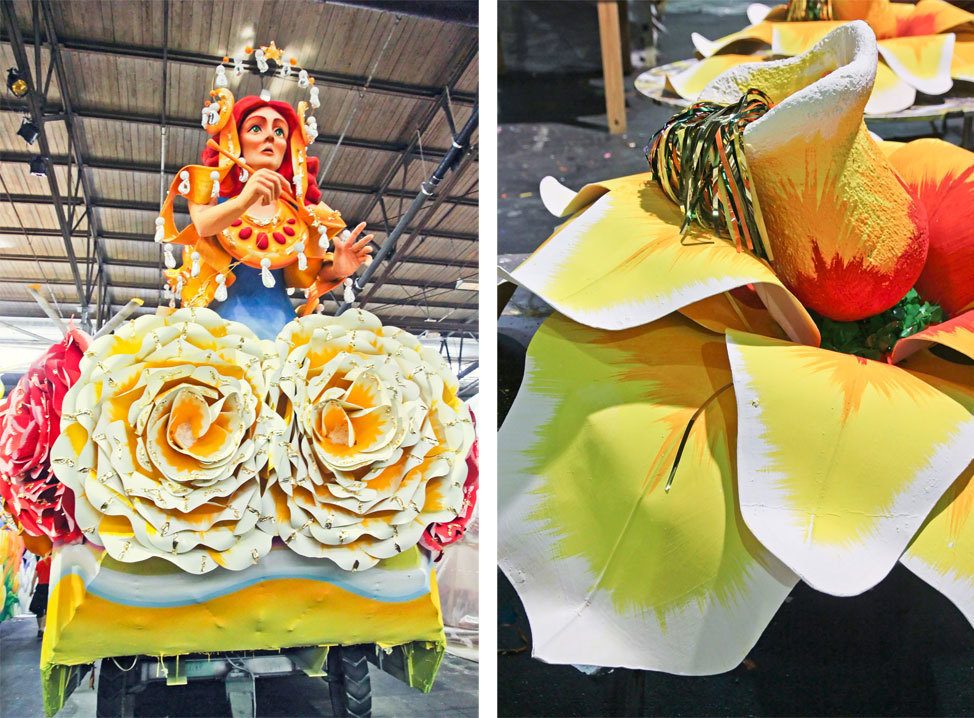 And as we examined the stationary floats up close, in the daylight and generally in conditions that the chaotic parades would never allow for, we appreciated their detail on another level. We also learned a lot — including the stunning revelation that New Orleans does indeed have some rules. Apparently, safety standards for the floats are strict. Safety ropes on the balconies determine the number of people on the float, and the size indicates what number of on-board bathrooms are required.

We couldn’t help but wonder what it might be like to see Mardi Gras from the bead-throwing side. 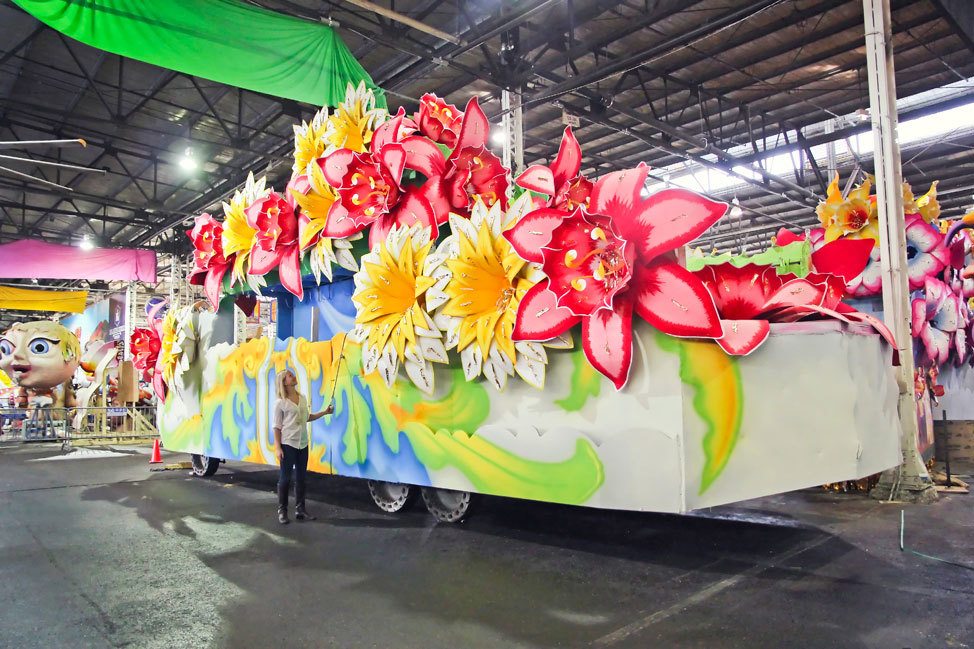 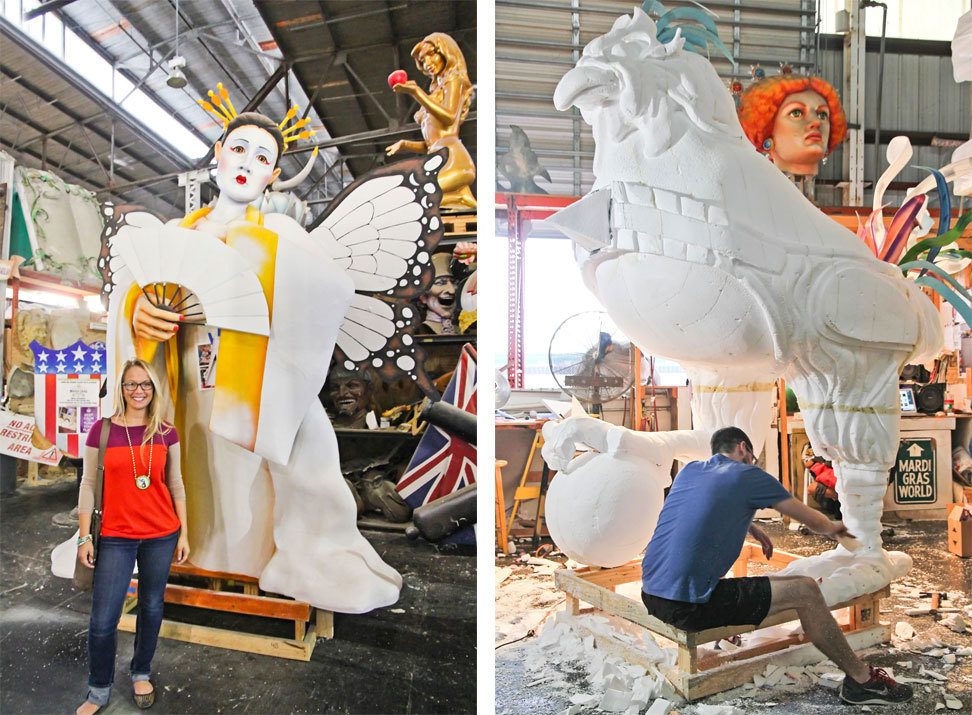 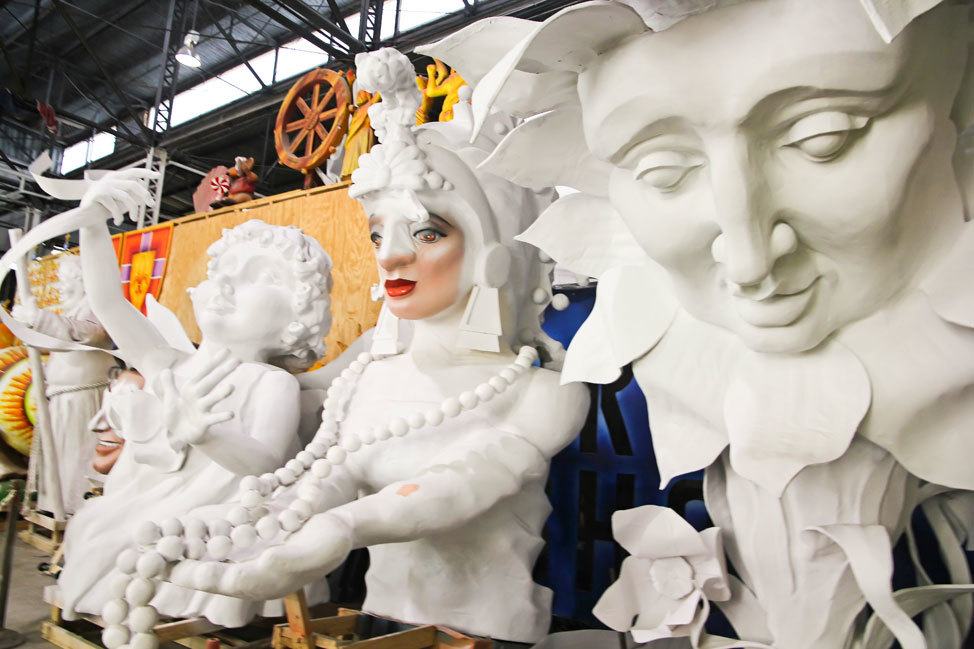 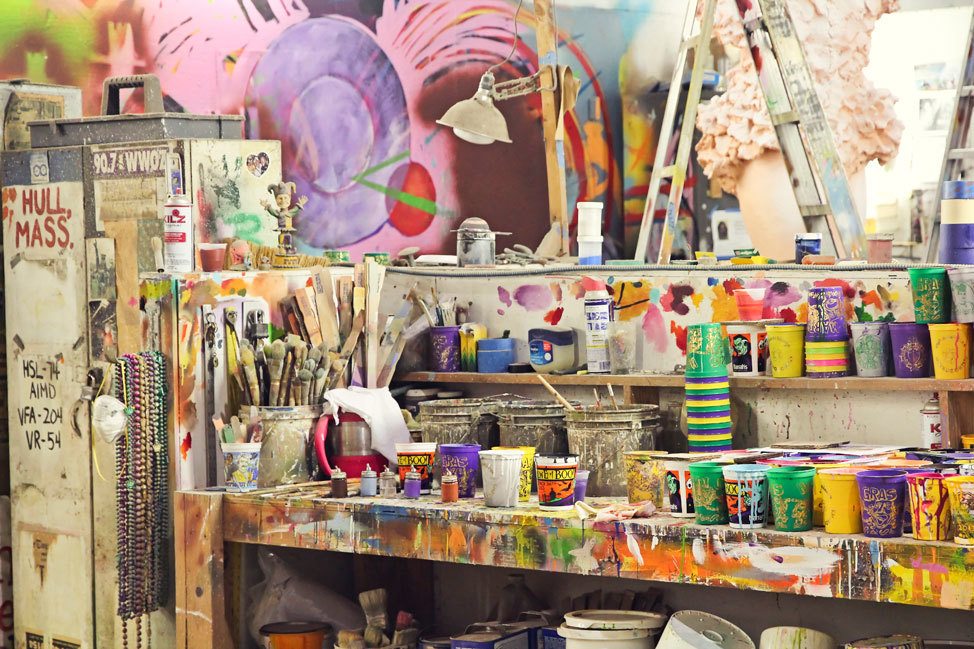 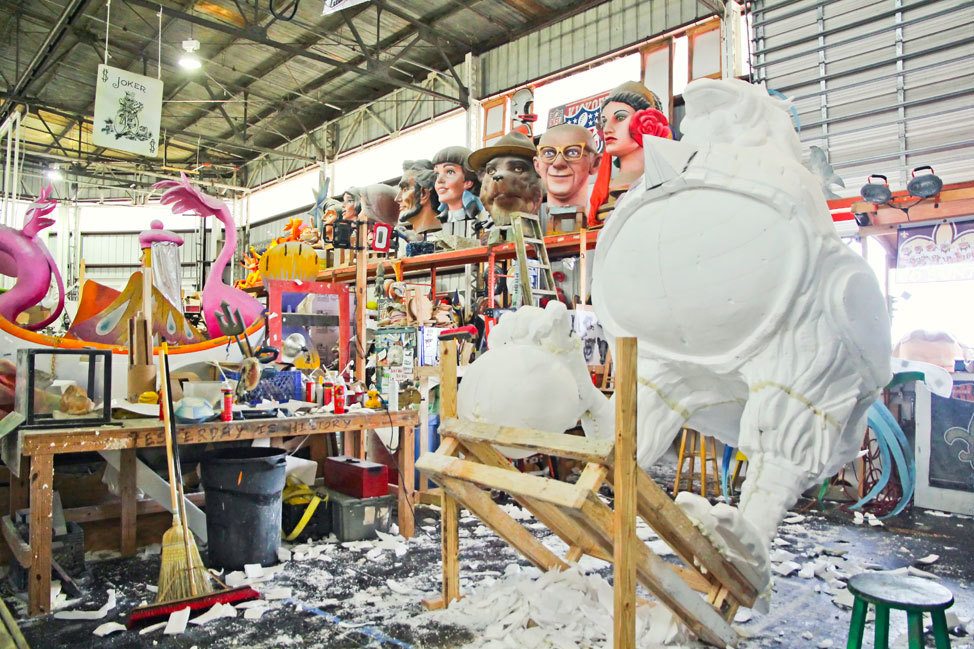 By the time we were exiting through the gift shop, we were totally sold on Mardi Gras World. Artists and engineers alike will be inspired by the logistics and creativity that goes into these masterpieces, and NOLA-lovers will love the behind-the-scenes look at one of the city’s greatest celebrations. But for any traveler, it’s a super fun and colorful place to reminisce about a past Mardi Gras — or daydream about a future one! 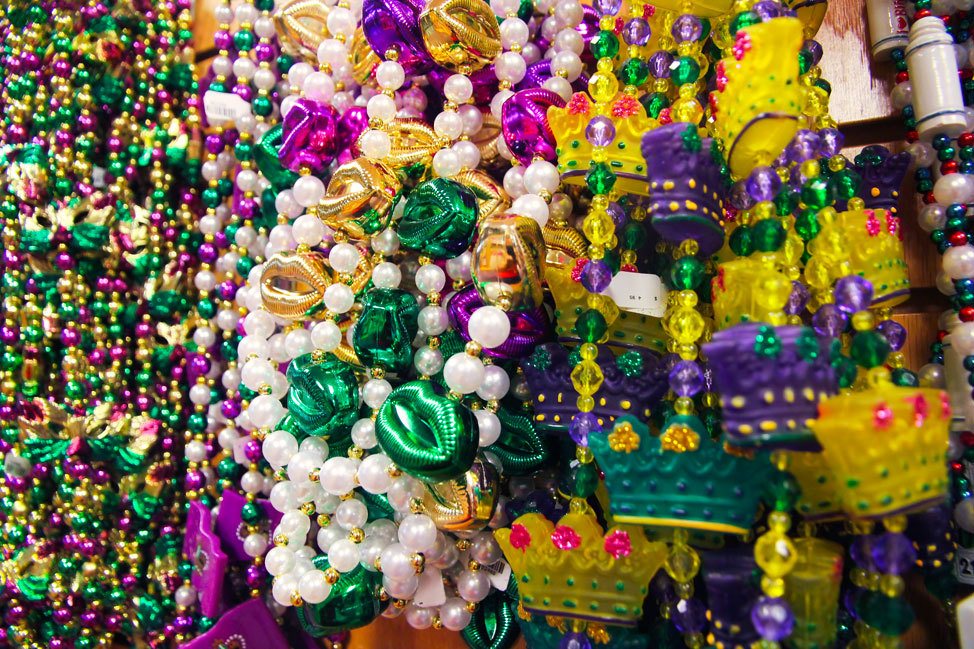 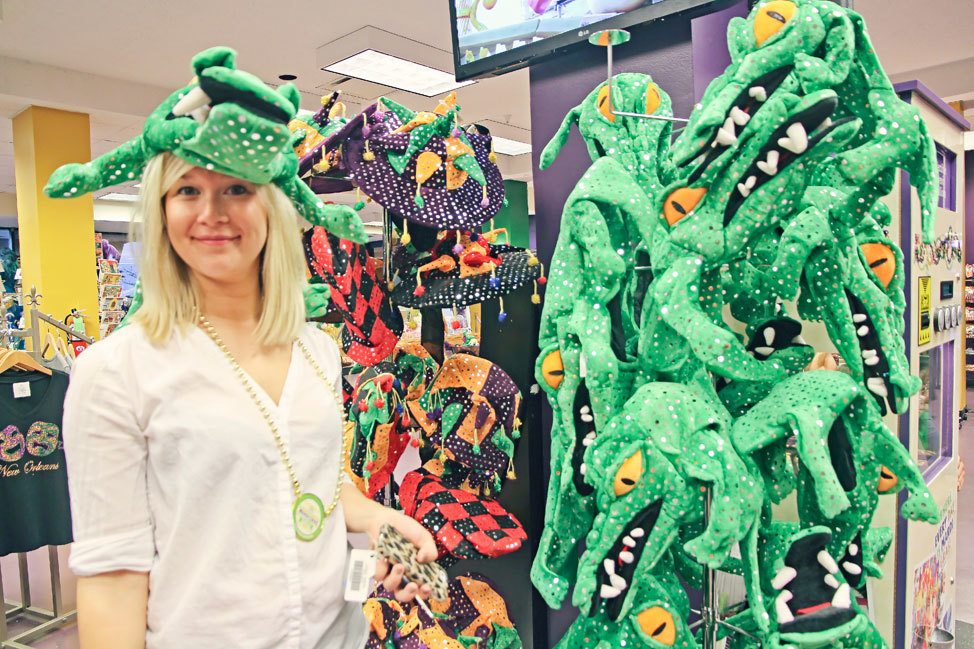 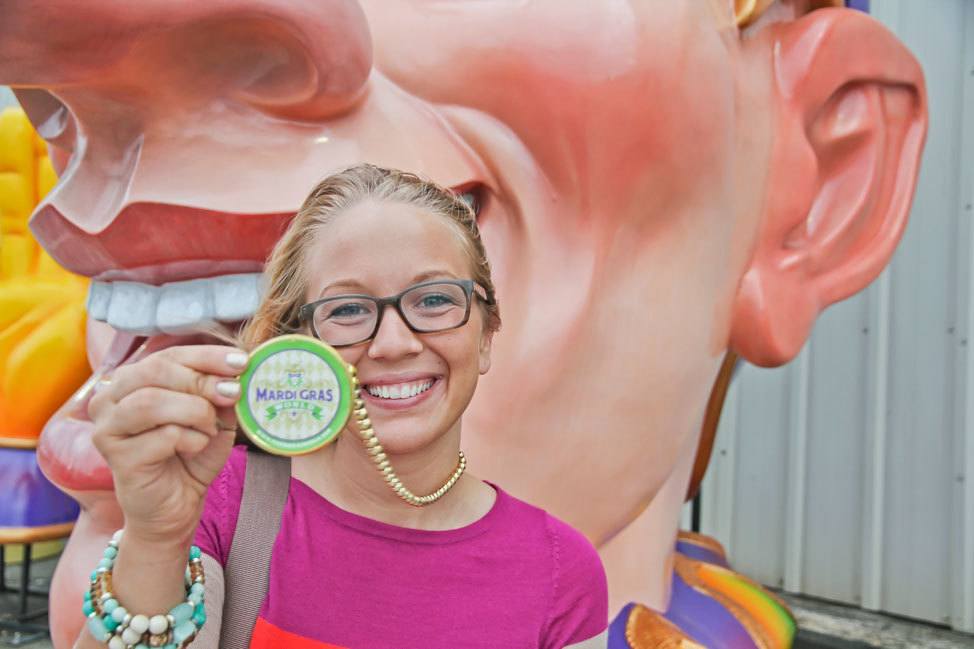 Have you ever been surprised by what you thought would be a cheesy tourist attraction?

Yeehaw! My First Trip to Texas for TravelCon

Escapades in the Everglades: A Road Trip to Miami