Within a week of arriving back in New York, I was already leaving its borders once again. But this time, I wasn’t going far — just popping across state lines into New Jersey for a weekend at Beneath the Sea, the biggest consumer dive show in the US. I’ve attended the show twice before, as a wide-eyed scuba enthusiast in 2011 and as a Women Diver’s Hall of Fame grant recipient in 2012. This time, I was honored to be asked to speak to the Women Diver’s Hall of Fame brunch, and to help man their booth on the showroom floor. 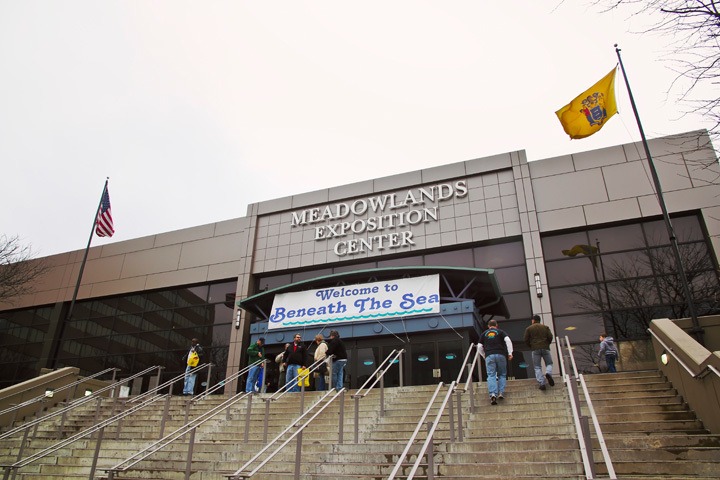 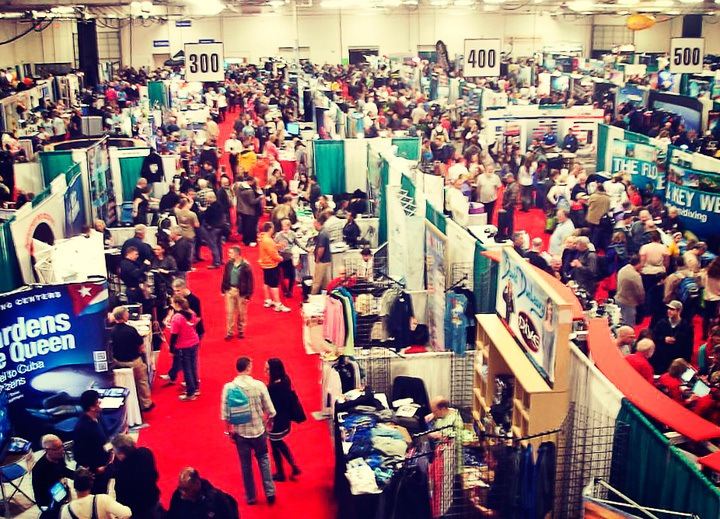 As a diving enthusiast I love slowly strolling the showroom floor, daydreaming about the beautiful dive destinations being promoted, seeing what new innovations the gear manufacturers have come up with, dropping my jaw over the crazy camera deals and chatting to other scuba addicts along the way. As usual I dropped my business card in every contest I could find, fingers crossed for a week away on a liveaboard somewhere exotic (there better be a defibrillator nearby if I ever win one of the Arenui giveaways — it’s basically in the top slot of my bucket list). 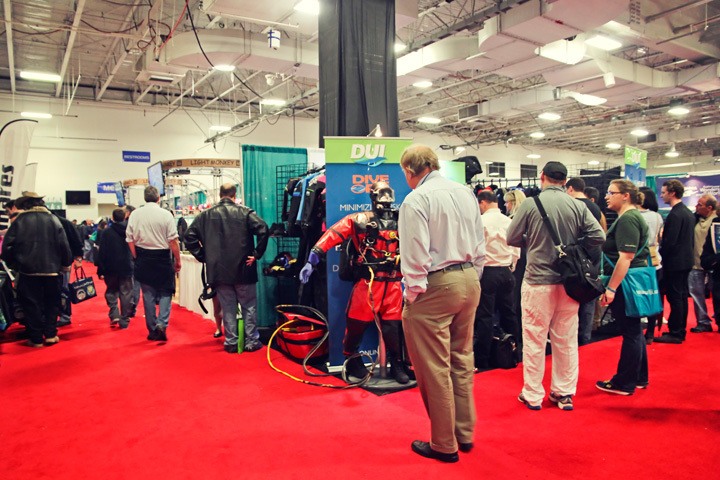 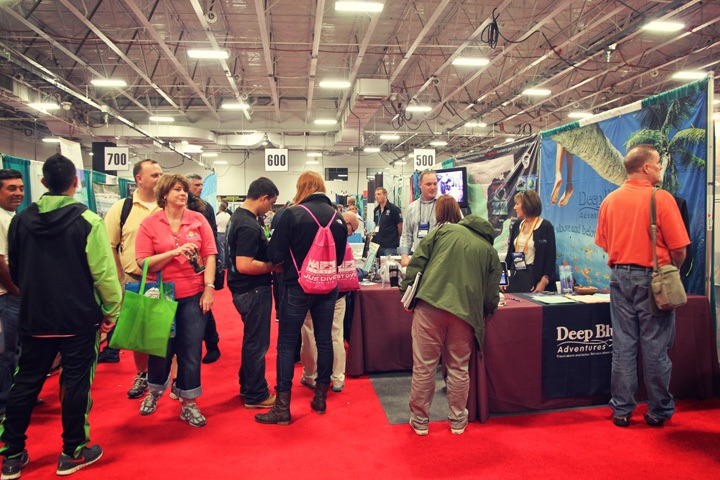 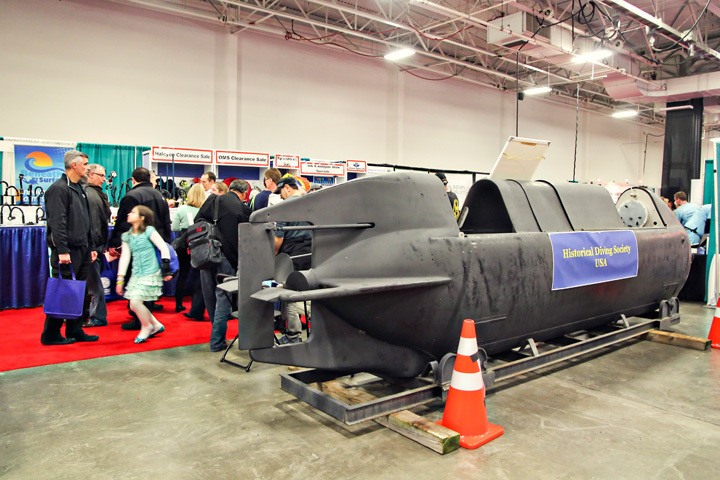 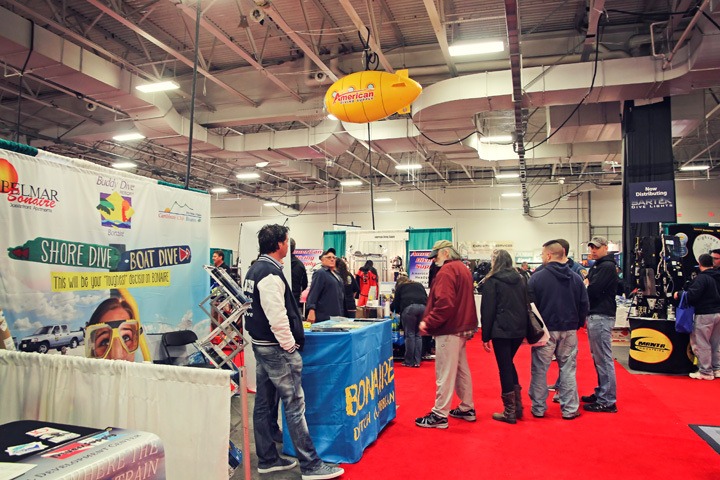 My favorite part of BTS is the seminars. It’s always a challenge deciding which to attend as there are up to eight running simultaneously. This year I made it to Adventures of the Exosuit by Jean-Michel Cousteau. It is always exciting to see a member of the Cousteau family speak and he had a great quip about reporters who ask him what he’s hoping to get out of his next expedition. “If I knew, I wouldn’t be going!” was clever and the response of a true explorer.

The next seminar I caught was Fifty Years of Teaching Scuba: What Has Been Gained and Lost by Walt “Butch” Hendrick. I assumed this would be a constructive look at some of the issues in the diving industry and an inspiring look at how we can turn them around. Hilariously, it was pretty much a solid hour-long rant about the industry is doomed and there’s no hope for any of us. I wish I had a photo of the looks on everyone’s faces when it was over. The guys has an opinion and he’s not afraid to share it — I give him points for that! 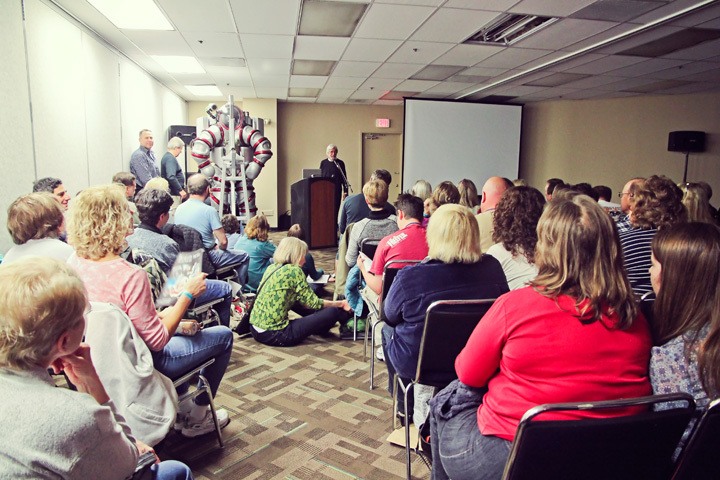 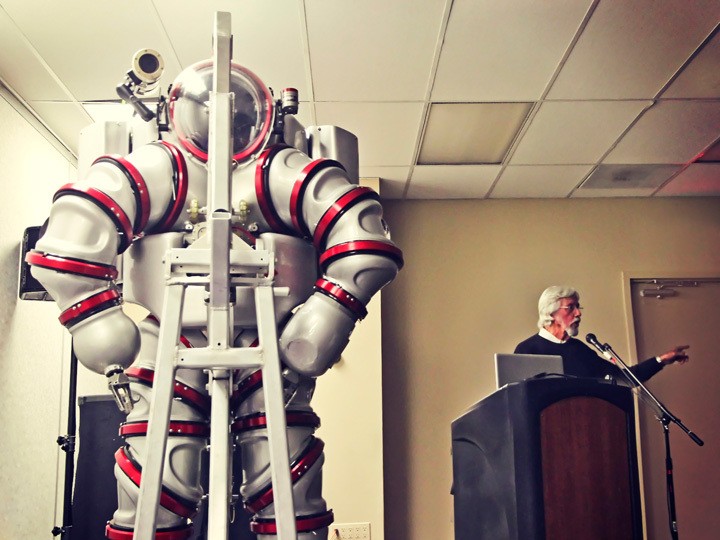 My favorite seminar of the weekend was A Better Business Model for Scuba Professionals by Dave Ochs. His presentation about how he makes a six figure living as an independent dive guide in Palm Beach, Florida was inspiring to me on so many levels. While I don’t know if I will ever own a dive business, I too happen to work in an industry where it’s basically assumed that you’ll always be earning just above the poverty line. I loved hearing — and seeing, through an extremely detailed and clear example — the story of someone refusing to accept that and finding a way to earn and fair and abundant living doing the work they love. I found this session so enlightening I’m hoping to do a full post about it in the future.

Sunday, I made my way to two final seminars, both with a creative lean. The first was Underwater Photographic Creativity by John Ares, which helped me think about how I define my style, sold me on the idea of diving with a shot list, and inspired me to take more time to study the work of others in order to improve my own. The second was Underwater Photography Made Easy by Annie Crawley. Annie is somewhat of a mentor to me and I look forward to her talks every year. She is an amazing woman and watch this space — I’m hoping to talk her into an Alex in Wanderland interview soon!

I was pretty bummed to miss Rob Stewart’s talk (he’s the director of Shark Water and is coming out with a new film soon) but duty called — it was my turn to work the Women Divers Hall of Fame booth. Though it was towards the end of the show and things were quieting down, I loved chatting about scholarship opportunities to some of the young divers who stopped by and get to know the other ladies at the booth a bit better. 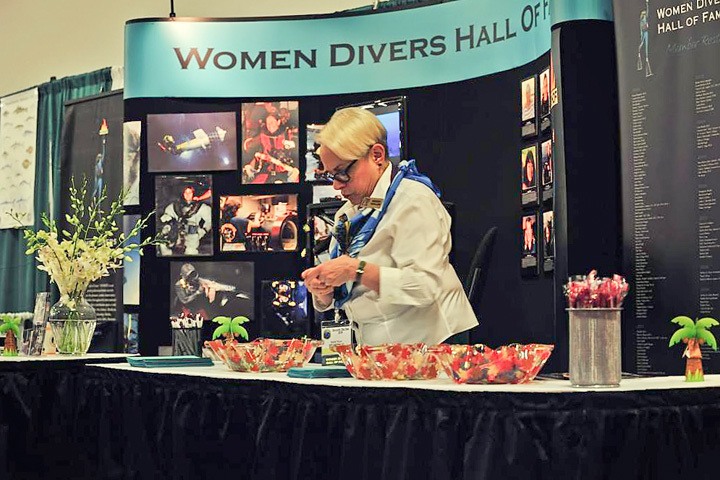 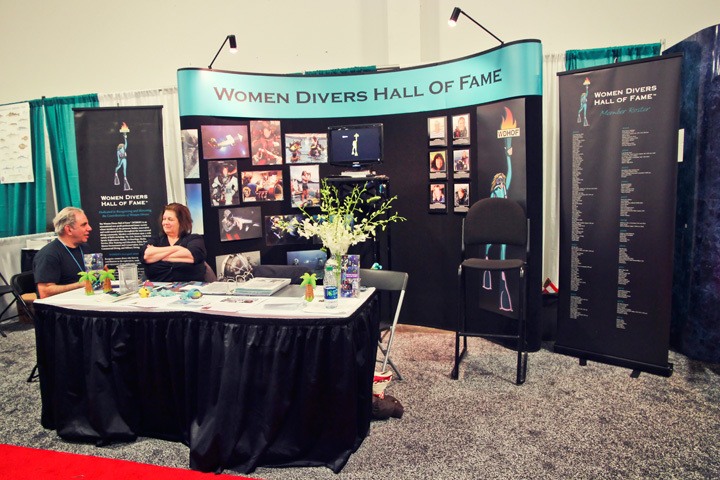 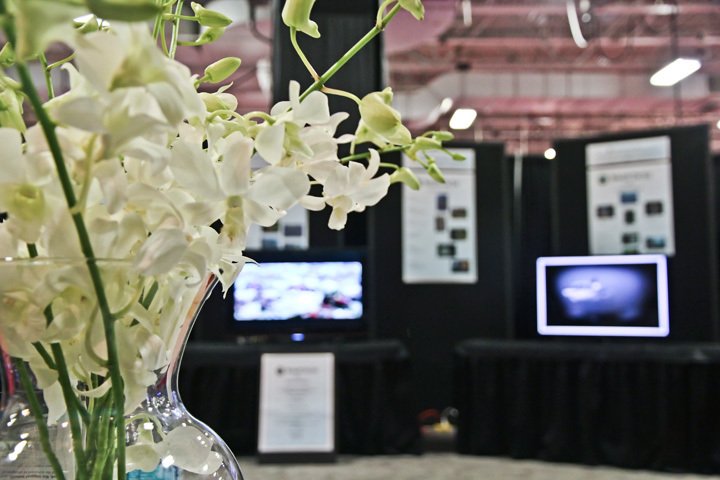 But the big event of the weekend for me was the Women Diver’s Hall of Fame Sunday brunch. The morning is made up of a fabulous spread of breakfast treats (free-flowing mimosas included!), a silent auction of ocean-related items, the induction of the new Women Divers Hall of Fame members, and the awarding of the 2014 training grants and scholarships. When Bonnie Toth, who personally underwrote my grant and has been a wonderful support to me, asked me to speak at the event, I couldn’t imagine what someone like me could have to say to such a group. It’s easy to be intimidated in a room full of accomplished scientists, artists, educators and pioneers and it’s not the first time I’ve found myself wondering how I could possibly fit in to the mix. The Women Diver’s Hall of Fame is made up of  women who have done so much for the diving industry — will I ever make a contribution significant enough to join their ranks? What difference can I make?

And then I thought about the steady stream of comments and emails I receive from readers thanking me for inspiring them to try diving for the first time, and I know that this is my role — using this blog as a platform to spread  excitement about diving and interest in conservation is my contribution to the diving community. 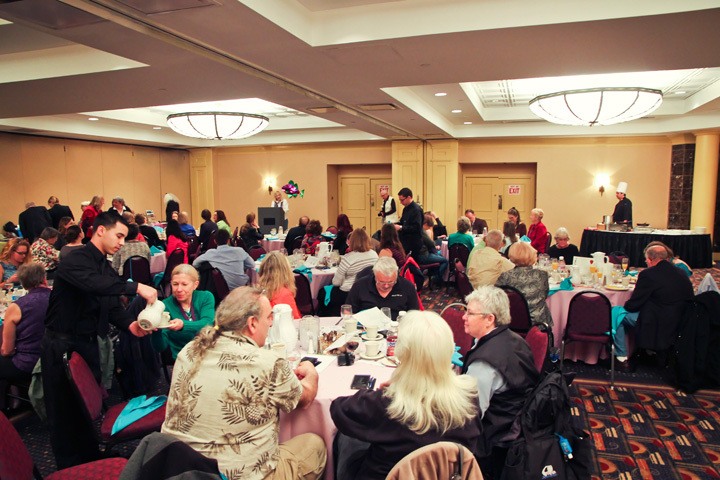 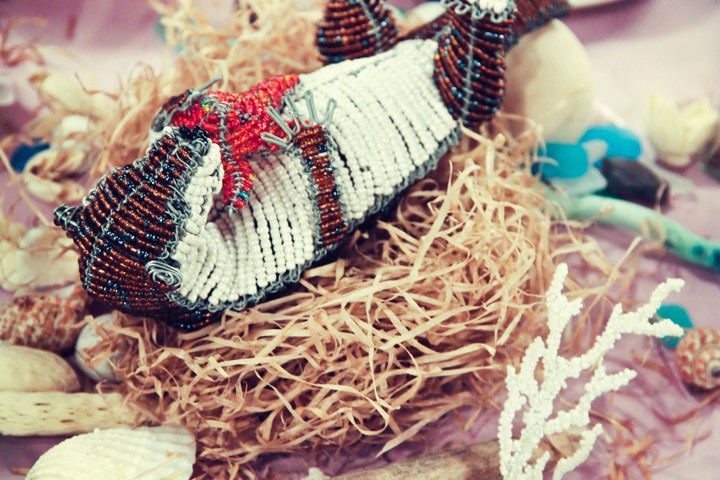 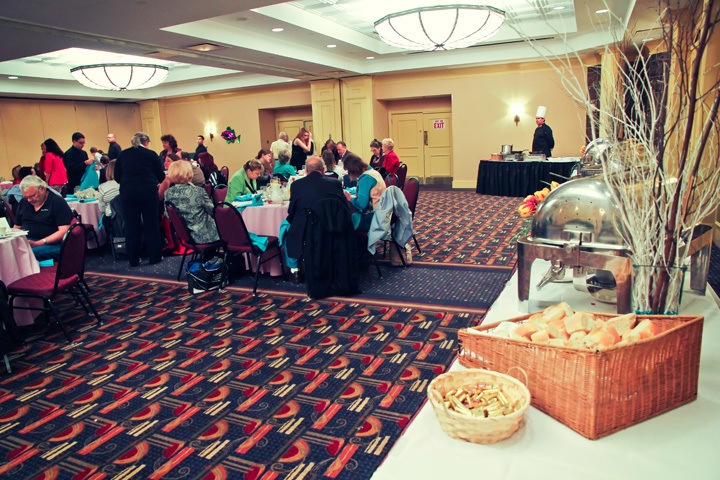 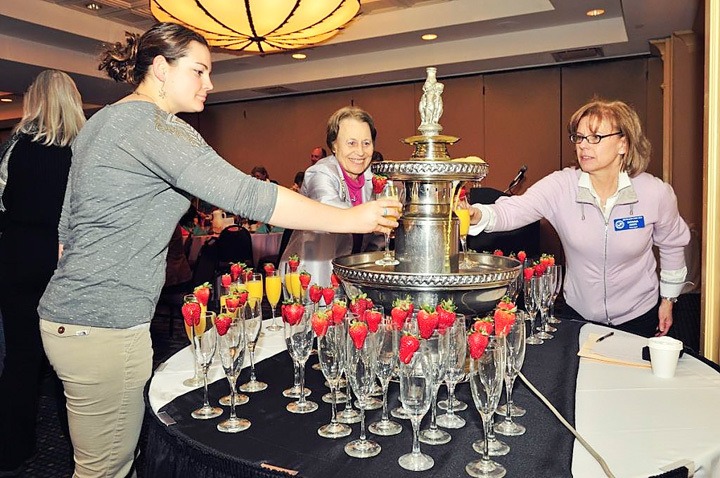 I am not much of a public speaker and I was a ball of nerves leading up to my talk — I seriously Googled Toastmasters meetings as soon as I got home that night. But stage fright aside, my presentation was aimed at updating the WDHOF on how their grant had affected my life and to give a few words of encouragement and advice to the new scholarship winners. I told the story of how I went from a terrified Open Water student to dumpster diving for dive gear to being taken under the wing of the WDHOF and becoming a PADI divemaster. My takeaway message to the scholarship winners was an old classic  — don’t let anything slow you down from living the life you want to live and achieving the things you want to achieve. I know from the emails I receive that diving is often intimidating even to those who take a keen interest in it. But you can make diving a part of your life. Find a way or make one.

That goes for all of your reading this right now too — take a look at the diving grants and scholarships on offer around the world! There are diving scholarships available from the Women Diver’s Hall of Fame, from the Beneath the Sea Foundation, from Boston Sea Rovers, and from the World Underwater Scholarship Society — and I’m sure many more. 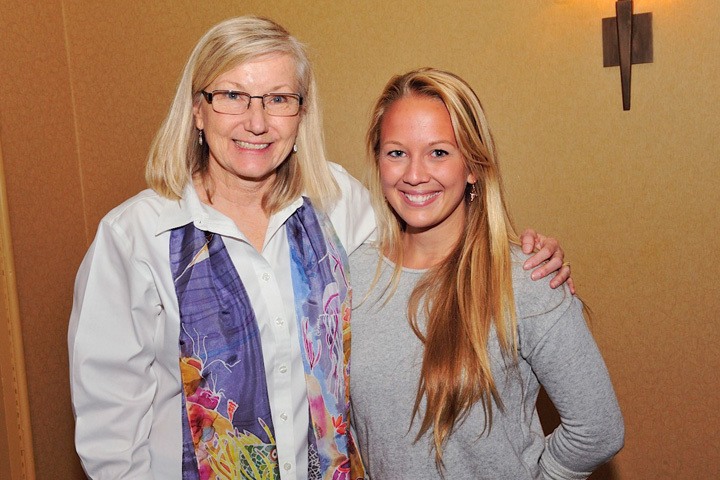 To the Women Divers Hall of Fame, congratulations on your ten year anniversary! How can I ever thank this group enough for what they’ve done for me? I also want to congratulate Bonnie Toth, who as I mentioned before personally underwrote my 2012 grant, for winning Diver of the Year for Service. She is an inspiration and I can only hope to someday be such an active and respected member of the diving community, supporting some dippy young diver the was she’s supported me. The weekend humbled me and inspired me to try to find new ways to be a generous and involved member of the diving community in this coming year.

Many thanks as always to Women Diver’s Hall of Fame community, and here’s to another great year at Beneath the Sea!

A Day Trip to Stanley, Idaho

Adventures Off The Strip: Ziplining in Bootleg Canyon

Photo of the Week 155 Why This Traveler Fell in Love With Solid Shampoo (Plus a Giveaway for You!)
28 Comments...