Blissing Out in Bocas del Toro

Confession: I’ve totally used this post title before. But I can’t really think of a better way to sum up the euphoric twelve days we spent in Panama’s Bocas del Toro archipelago. This laid-back Caribbean getaway is getting plenty of buzz these days thanks to its balance of ramshackle charm — you won’t find any five star chain hotels here — and traditional tourism draws like palm lined beaches, exotic wildlife, and azure waters.

In our twelve days we visited four islands, basing ourselves temporarily on three of them. While we had planned to settle into one spot for the full duration of our stay, we arrived to an endless row of “No Vacancy” signs and scrambled to piece together a Plan B. While our time was a bit more hectic as a result, we ended up with such a comprehensive view of this special part of the world I really think it was a fair trade off. 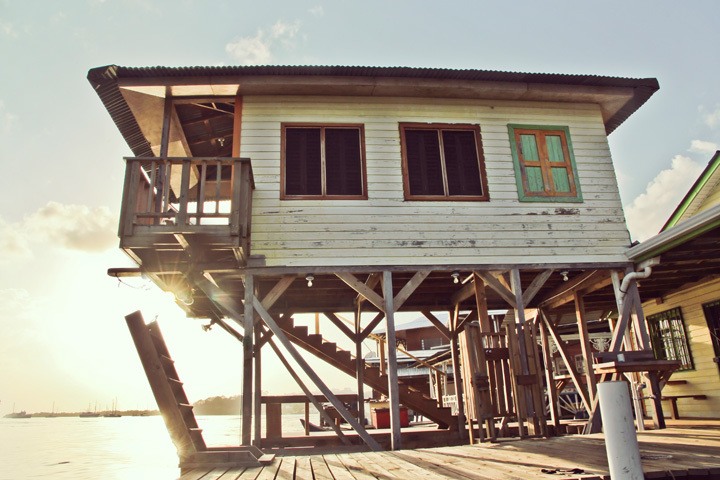 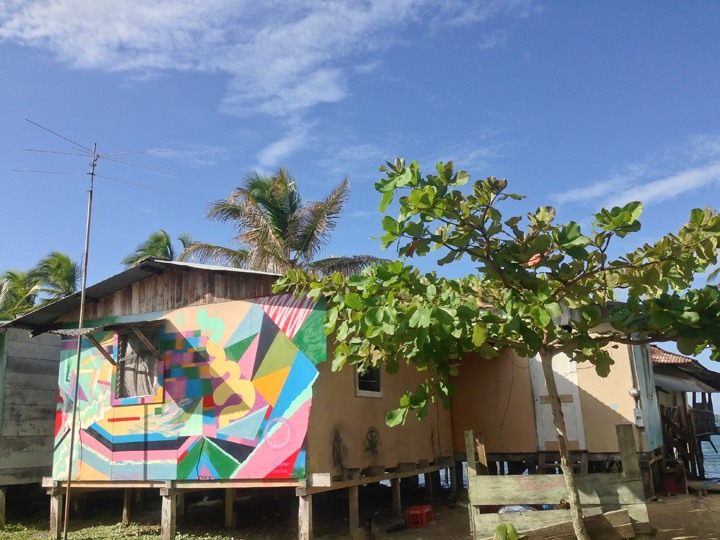 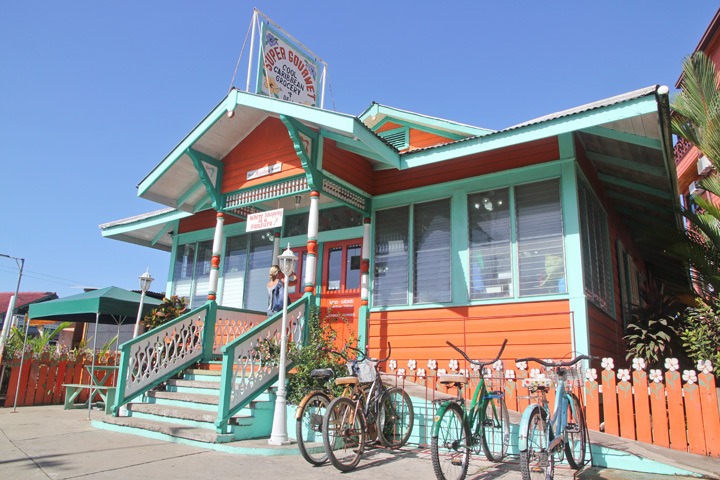 The largest and most developed of the islands is Isla Colon, which is also home to the provincial capital of Bocas Town. For many visitors, this is Bocas del Toro — and it’s not a bad view. Colorful guesthouses, dockside restaurants and bicycle traffic jams make up this traditionally Caribbean town.

After spending one night in an awful hostel (the only accommodation we could find upon arrival) we moved into Casa Verde, which I can’t recommend highly enough. It’s insanely popular, and rightly so. With cute clapboard rooms, a full kitchen, reasonably priced food and drinks, and a dock stocked with innertubes for just $32 a night, I was pretty much ready to move in. I was pretty crushed they only had three nights available for the entirety of our time in Bocas, so learn from my mistake and book ahead if you’re interested! 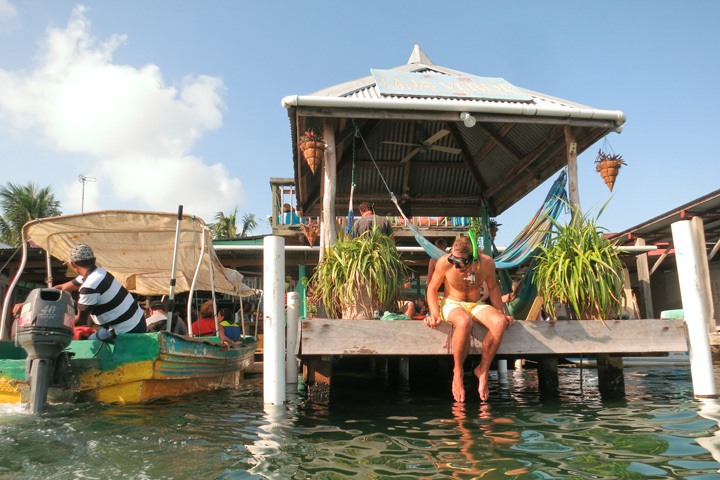 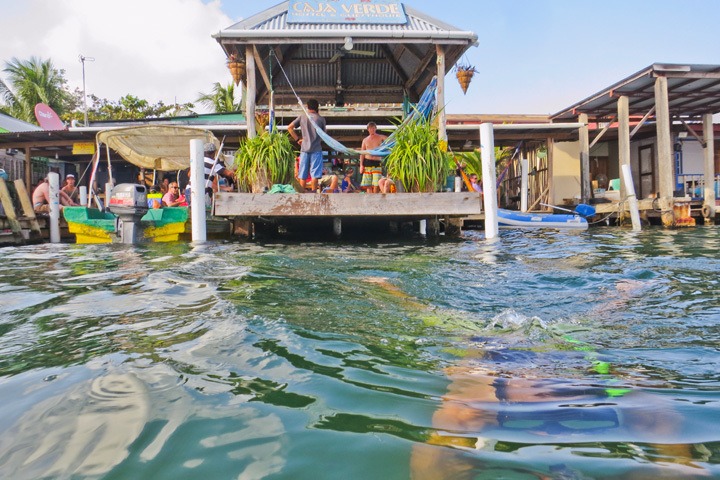 Our favorite part about Casa Verde was that we loved it so much we barely left. We just lazed in his-n-her hammocks, practiced Spanish with the sassy receptionist, floated in innertubes, cooked our own meals, and gave ourselves severe food poisoning.

Oh, right. That last one wasn’t the most idyllic of experiences. Once a year or so the universe likes to swoop in and remind me that I am a failure in all things domestic, and that when possible I should leave challenging tasks like cooking and laundry to the professionals. Otherwise I could end up turning an entire load of work uniforms pink, setting off the fire alarms for an entire apartment complex, or frantically researching the severity of undercooked-kidney-bean toxicity at 3am while barely clinging to life, just to cite some totally unspecific and non-personal examples. 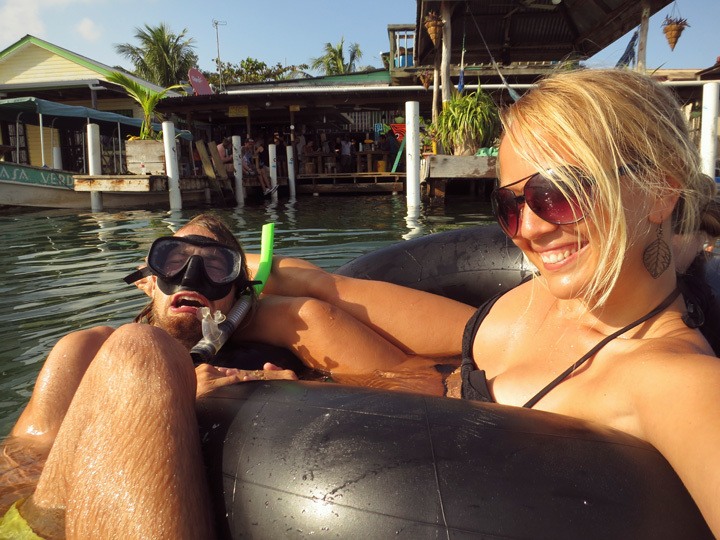 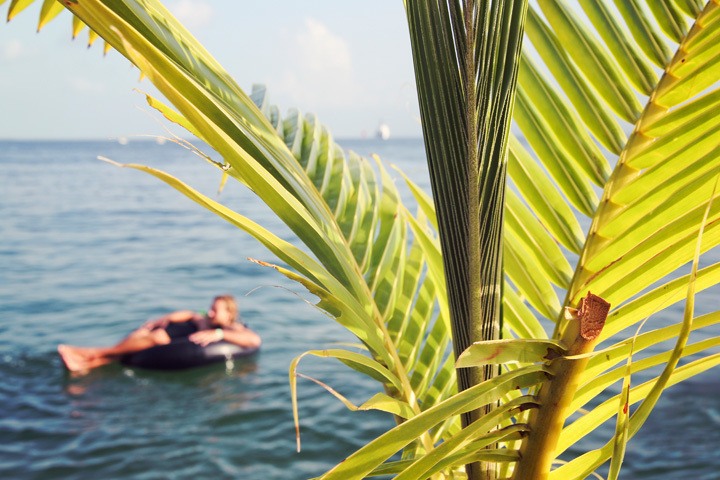 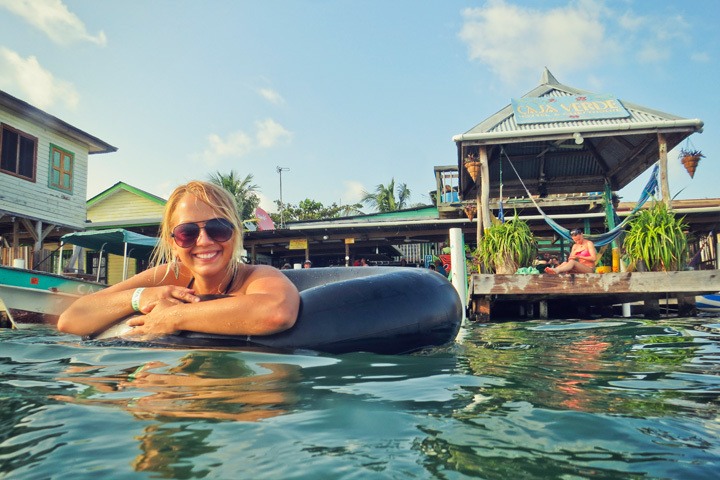 Domestic disasters aside, Bocas Town gave us plenty of tempting reasons not to cook our own meals. Our absolute favorite was Bocas Blended, which was notable not just for its deliciously healthy wraps and smoothies but also its, how shall we say, unique presentation. Once we got lucky and nabbed the best seats in the house — ocean views included. Other favorites include Maracuya, where we splurged on an oceanfront dinner for Valentine’s Day (of which I spent the majority trying to explain to Anders the joy that is Galentine’s Day, obviously) and Fat Boy Treats, which is quite accurately named. We also stocked up on all kinds of snacks at Super Gourmet, which had an exciting array of imported goodies from home. 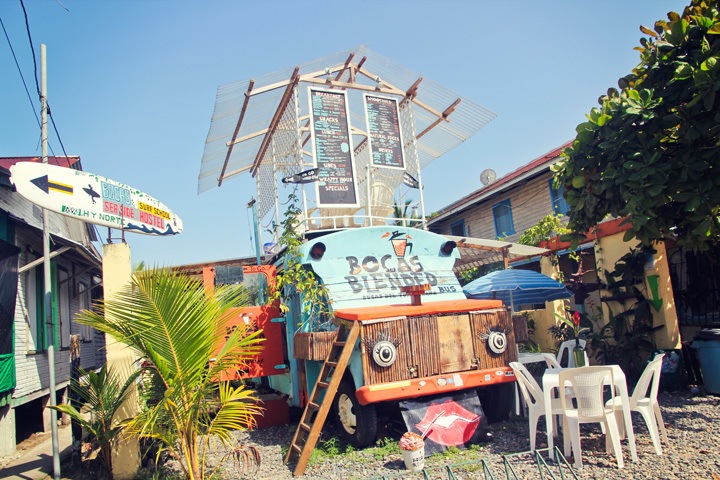 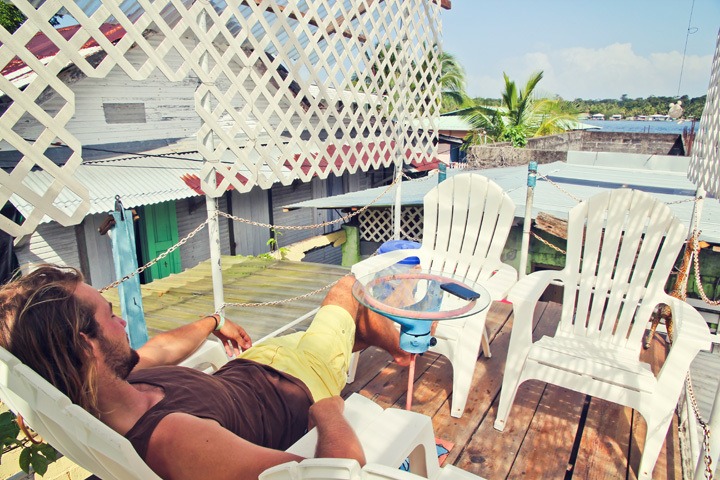 Tours and activities in Bocas are pretty pricey, and so while the Spanish lessons and yoga classes and hiking trips and boating expeditions and chocolate tours were all very loudly calling my name, we had to be picky. While we splurged on some excursions you’ll read about this week, we balanced them out with cheaper ones, like our bike ride out to Boca del Drago.

Boca del Drago, also known as Starfish Beach, can be reached by water taxi ($25 round trip) or land taxi ($30 round trip). Bikes, on the other hand, were a mere $7 per day — no extra charge for the 20 miles of round-trip cycling workout! The ride was quite a bit more difficult than we expected with plenty of hills, and cut clear across the length of Isla Colon. 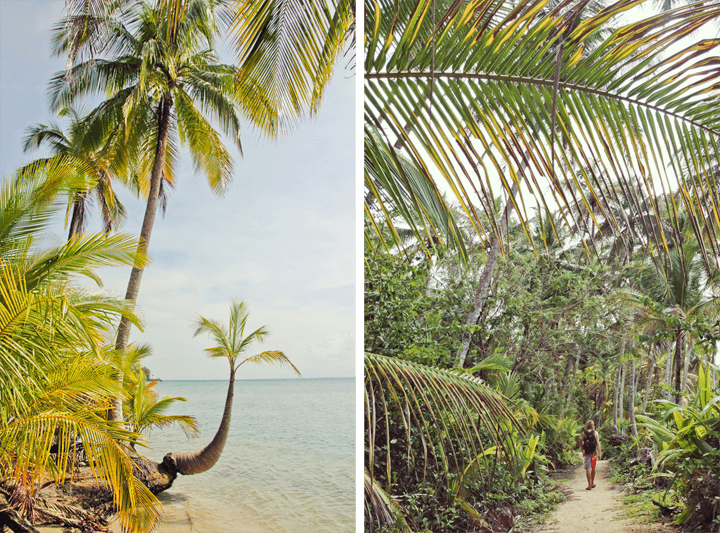 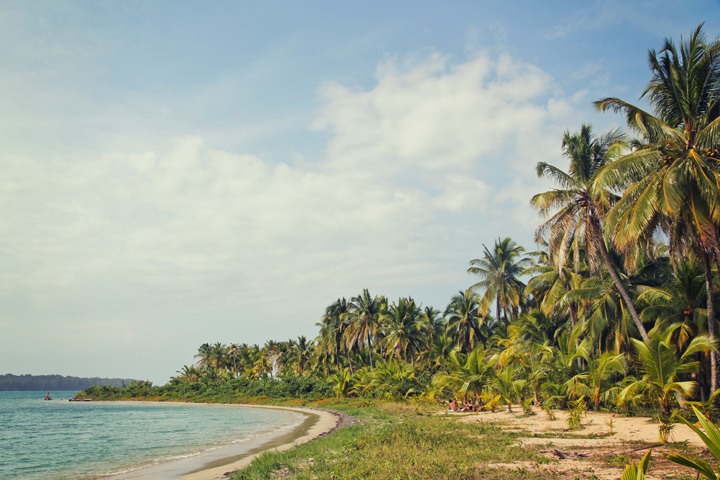 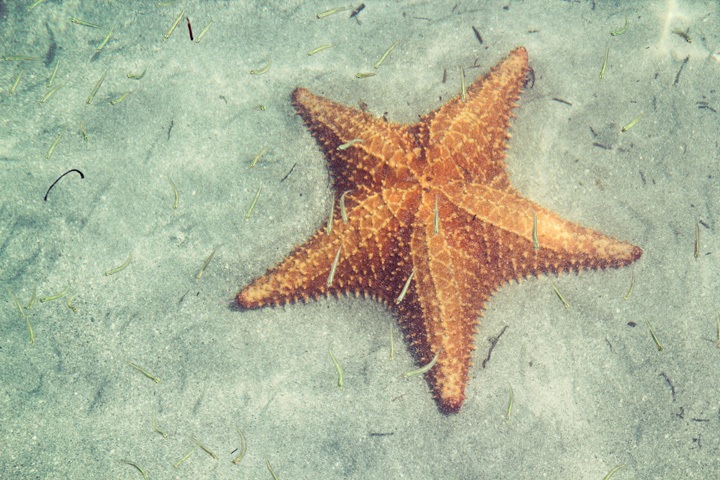 The only thing that would have made the day better would have been visiting the La Gruta caves, which we cycled right past. Unfortunately we had forgot our headlamps and gave it a pass. Otherwise it is a very remote and rural ride, and it’s almost a shock to arrive in Boca del Drago and be met with the crowds there. The starfish were a bit scarce and we both agreed we wouldn’t have enjoyed the day half as much had we simply hopped in a taxi. The satisfaction of the sweaty ten mile ride in each direction was what really made it worthwhile. 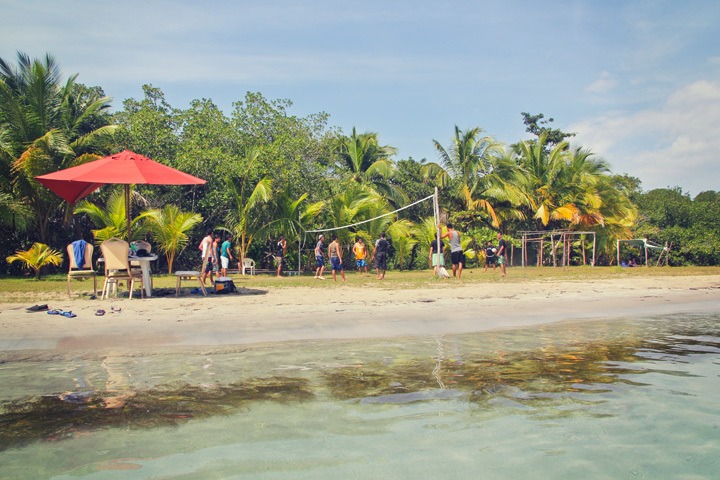 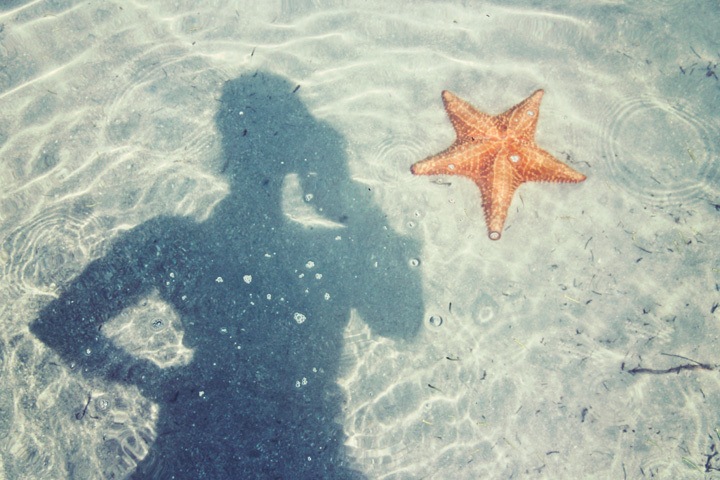 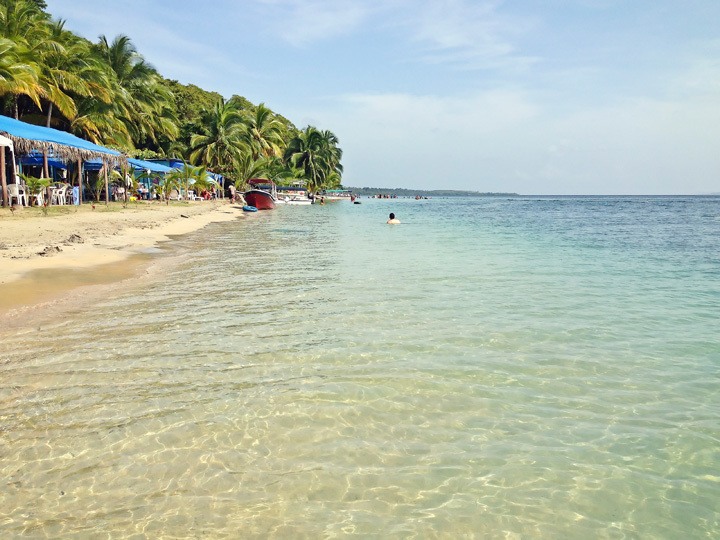 Can you see yourself vacationing on Isla Colon? Stay tuned for our adventures on Cayos Zapatillas, Isla Bastimientos and Isla Carenero!

Where I stayed: Casa Verde
Where I ate: Bocas Blended, Maracuya, Fat Boy Treats, and Super Gourmet were the standouts.
How I got there: We paid $25 for a shuttle from Boquete to Bocas, including boat transfer, through Mamallena Hostel in Boquete. It took a few hours and saved us several bus transfers.
Bonus Tip: Book ahead in high season, as the quality of accommodation ranges wildly and the good spots are snapped up fast. Bring a reusable water bottle in order to refill at the purifying stations around town — this is one of the few areas of Panama where you can’t drink from the tap, and bottled water is both wasteful and ridiculously expensive.

Style at Every Price in Panama City