Diving in Iceland, surfing in Oahu, paddleboarding in the Amazon jungle — I like to think I’ve got exotic aquatic adventuring pretty well covered. So you can imagine my intrigue when I heard about a new water sport called deep boarding, or coral surfing, available only one place in the world — Bocas del Toro, Panama. I had to try it. We were so enthusiastic we ended up signing up for two different tours, each with vastly different results.

Our first attempt was with Under Sea, the largest and most well-known company offering deep board tours. After some debate we decided to splurge on a trip to Cayos Zapatillas over a shorter and cheaper option. While similar tours including lunch, snorkeling, and beach time at Zapatillas are advertised all over the island for $35, Under Sea charges $50. But unlike the cheaper versions, this one offered the chance to try deep boarding. We signed up. 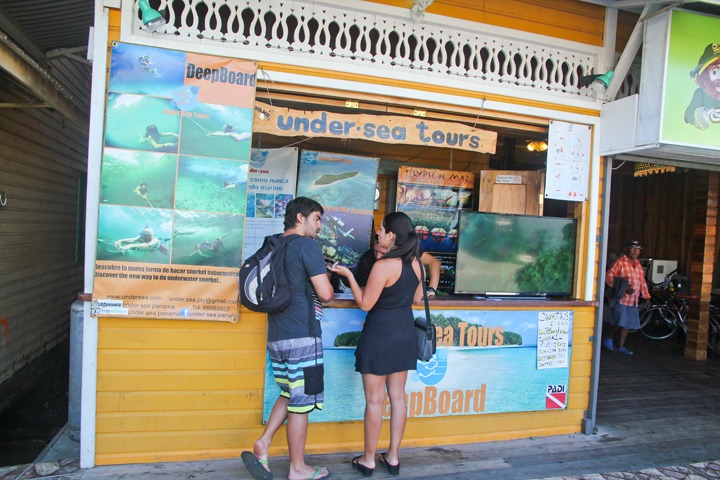 The woman who signed us up won my heart immediately by promising to put Diet Coke on the boat, and we practically skipped to the tour office the next day. The trip started off really well, with dolphins leaping around the boat in aptly named Dolphin Bay and sloths mugging for us at Solarte Cay. They were nice stops to break up the somewhat long journey out to Zapatilla. 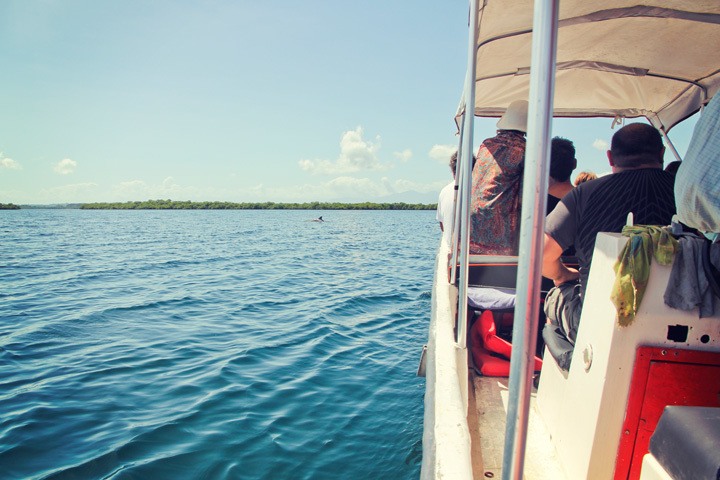 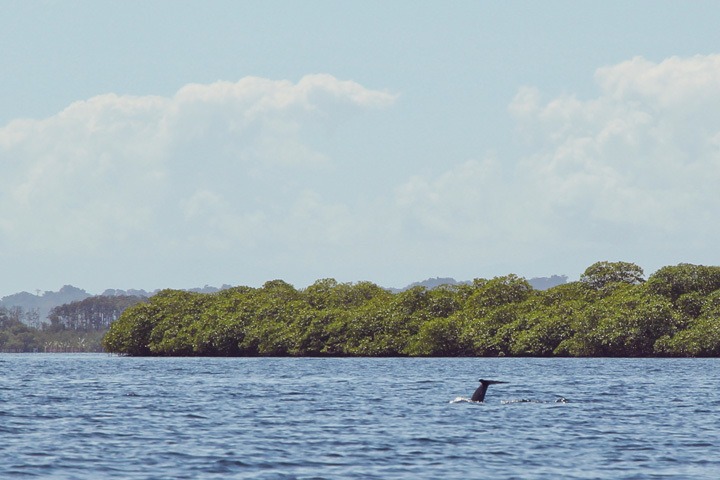 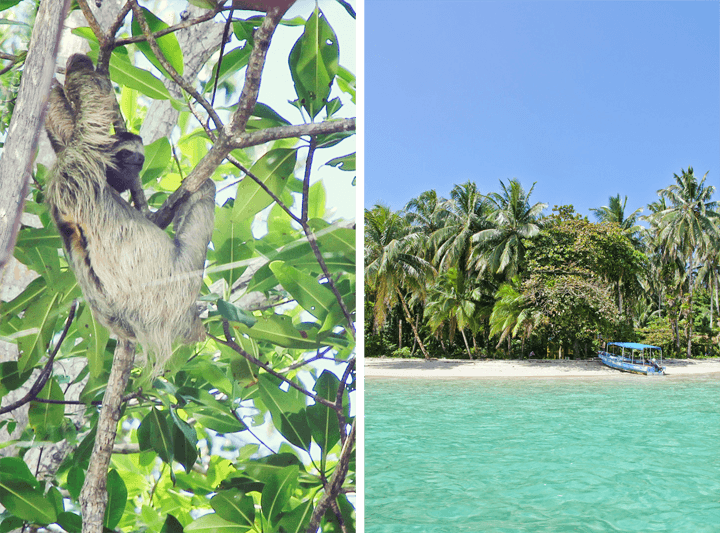 As the boat pulled up towards Zapatilla you could hear the shuffle as every single person on the boat reached for their camera. Yes, that was paradise. The kind of palm-lined island that postcards are made of. I turned to Anders, who was in the Caribbean for the first time, and assured him that it was as good as it gets. 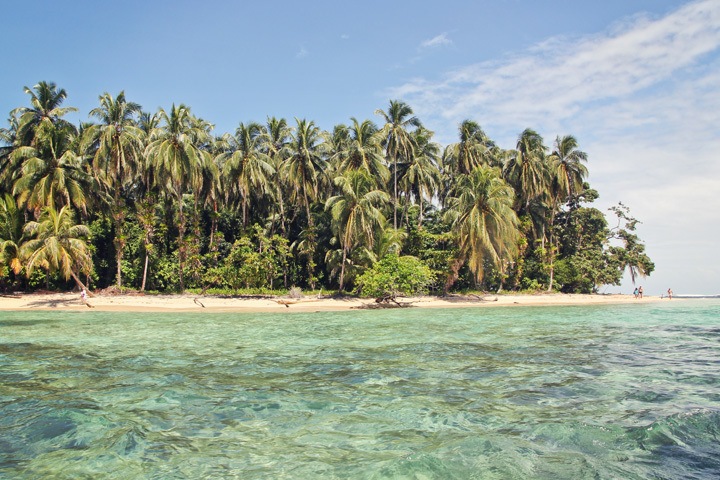 I ignored the cattle-like feeling as we were herded off the boats and into an area to await instructions. Because we were such a large group, it was explained, some would deep board while others snorkeled and others ate lunch. Anders and I practically tripped over ourselves volunteering to go first.

In the simplest terms, deep boarding involves clinging to a custom molded piece of plastic while being dragged by a boat. The setup allowed for three at a time. “So, should you go in the middle with the camera?” I asked our guide. The poster advertising the trip had boasted free underwater photos as a major feature, and I had made a point to ask the saleswoman about it upon sign up — she assured me they’d be uploaded to a special online album where we could download as we pleased. “Oh, we can’t do those today. There are too many people,” the guide shrugged. I tried not to show my annoyance while I explained that we had been promised photos when booking, and that it was a huge selling point of the tour to us, which was met by yet another shrug. Granted, as a blogger photos are more important to me than they may be to the average tourist but I don’t know why the number of guests should mean that an advertised and confirmed feature of the tour should be omitted. Luckily, Anders had his GoPro so he was able to snap a few shots. But we were pretty bummed. 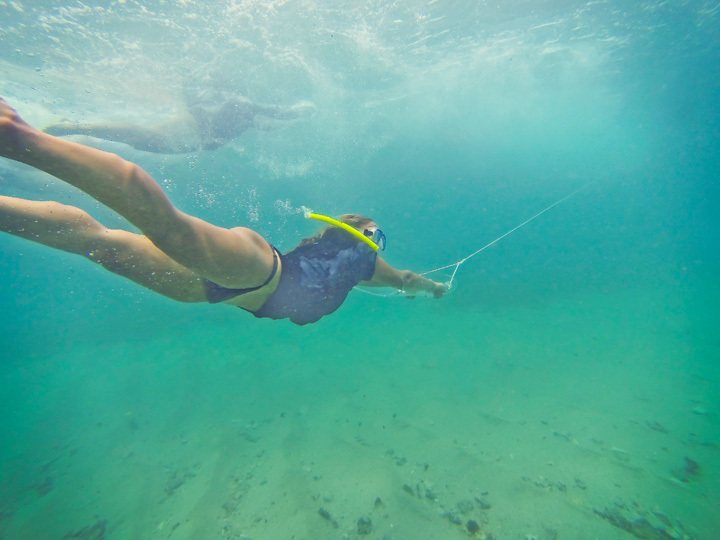 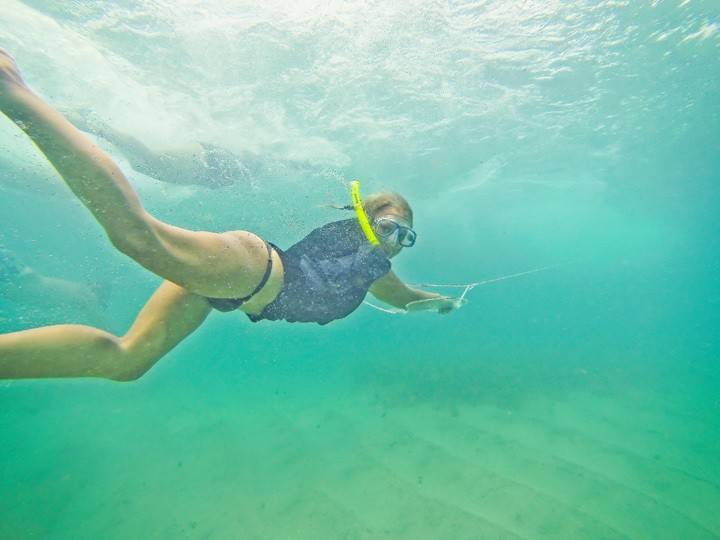 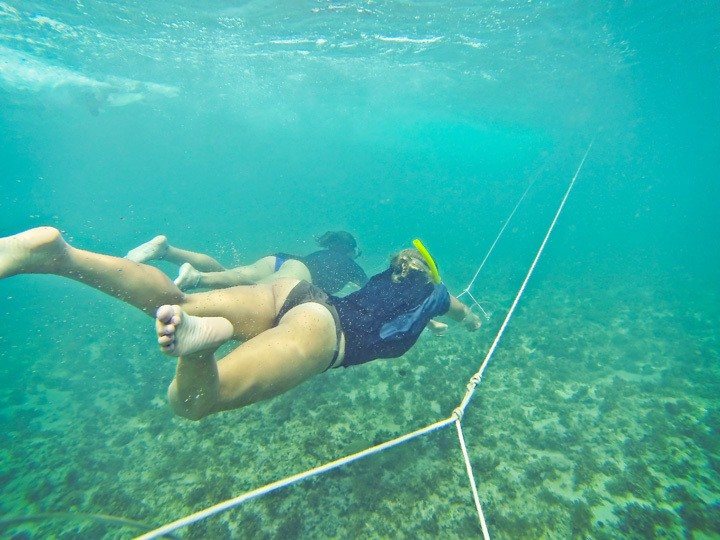 We absolutely adored the deep boarding. While there was nothing much to see, it was really fun and exhilarating! When we wanted to go deeper, we tilted the board down and sailed to the sea floor. I was amazed by how long I lasted underwater without craving air, I suppose because I wasn’t using any energy to get there. When it was finally necessary. I simply nudged the board towards the surface and soon broke above the gentle waves.

We were just getting the hang of it when our twelve minutes or so were up. We had a lovely lunch and lazed on the beach for a bit, but we were itching to deep board a bit more. We casually asked one of the employees if it was possible to go for a second round and they replied that usually it was no problem — but today there were too many people.

Well, hey — at least our backup plan was hanging out on the most beautiful beach of all times. 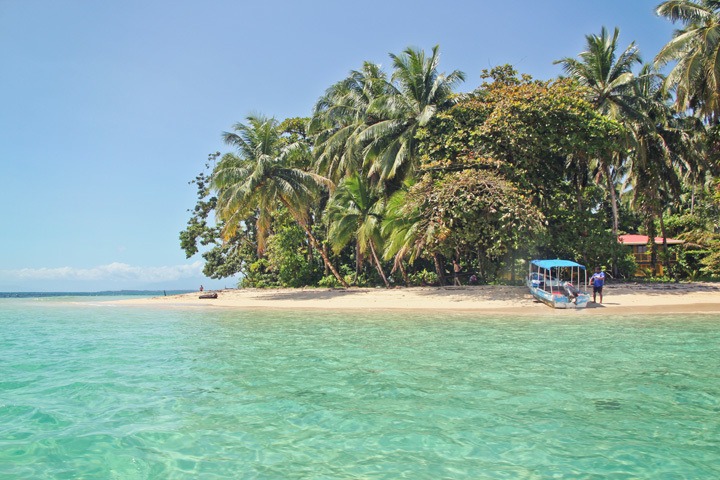 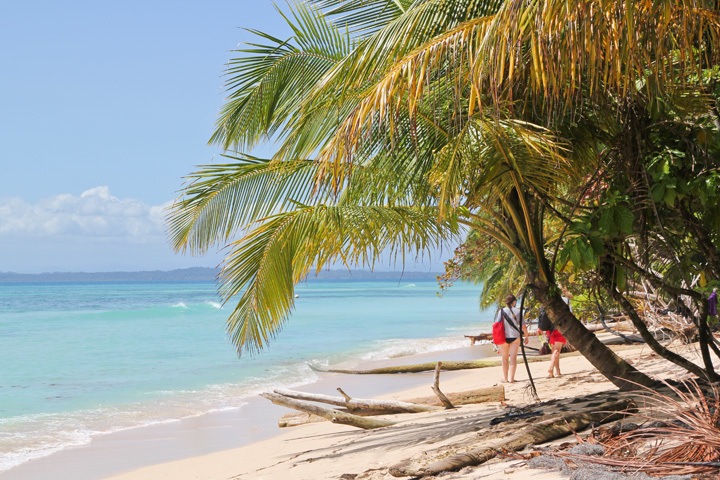 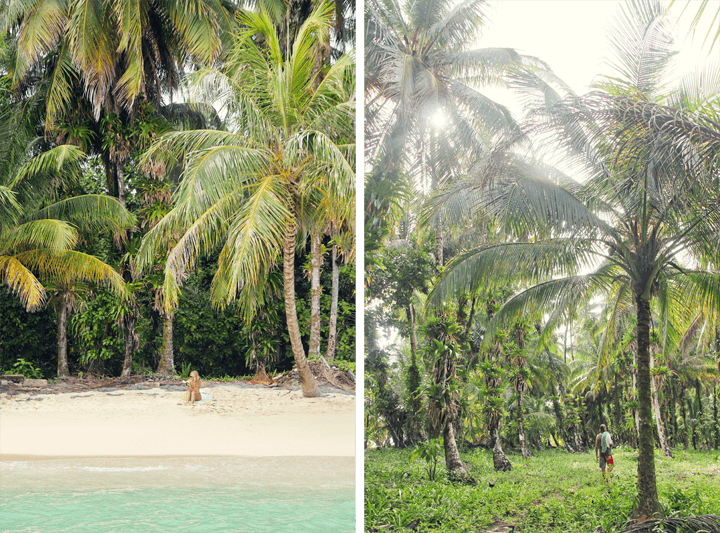 I admit that having worked in the tourism industry, Anders and I both have very high standards especially when it comes to customer service. And that is why I unfortunately cannot recommend using this company based on the customer service and the short amount of time actually spent on the boards. There were so many positives — a fantastic lunch, a lovely sales lady in the town office, a beautiful island, and a unique activity. However, as budget travelers this wasn’t cheap for us and we were disappointed by the false advertising and more importantly, by the lackluster response we received when we noted the discrepancies in what was promised and received. We tried talking to the manager upon return and he offered no compensation or even apology. I was so annoyed I actually left a Tripadvisor review — something I haven’t done in years!

We did have a pretty good laugh over what grinches we had become, sitting around and bitching in paradise. 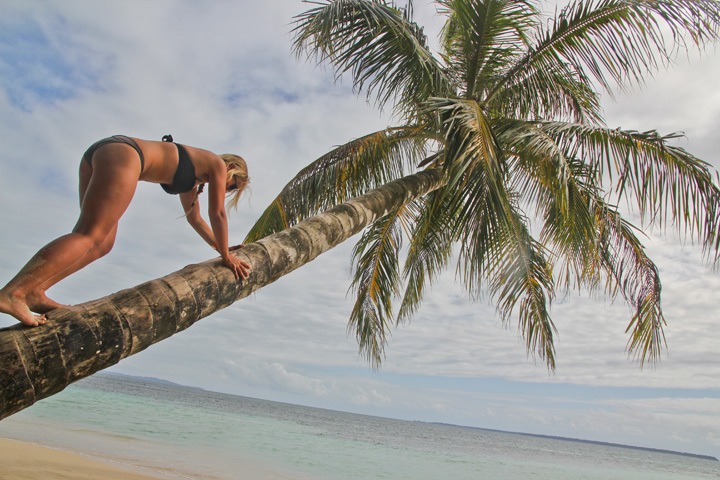 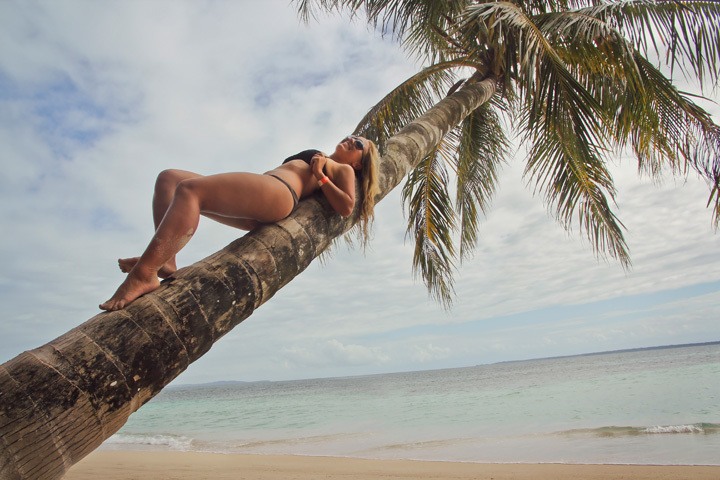 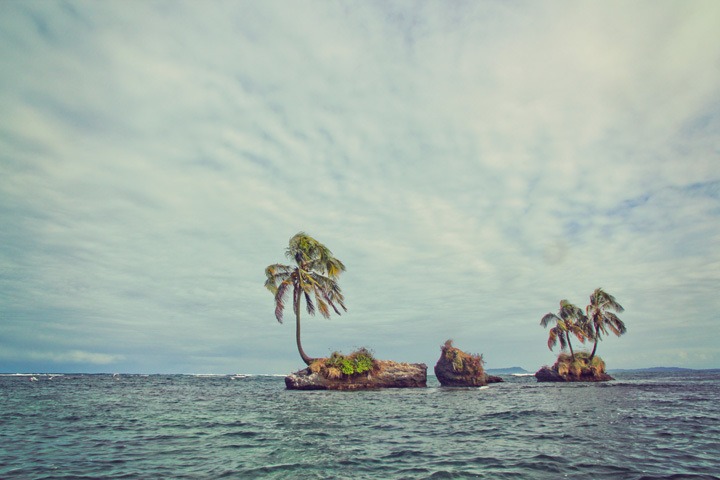 A few days later, we still had the itch to try the deep boarding again, but we were not in the mood to hand over more cash to Under Sea. So were thrilled when we found Coral Surfing, a small business offering a similar experience with a slightly modified board. This time, wallets still stinging, we went for the $30 “half day” option, though we suspiciously asked many questions about how many other customers there would be and how much time we would get in the water. “As much as you want!,” the saleswoman assured us. “You’ll be the only customers.”

And she wasn’t kidding. A lovely French woman picked us up and brought us out to a remote bay somewhere around Isla Colon. There, she dropped us into the water and explained how to signal to her that we wanted to go faster or slower. These boards were somewhat more advanced — instead of just going up and down, we could also go left and right, or do complete twirls underwater! It was amazing how entertaining it was.

Though the water was deeper in this area than it had been in Zapatilla, there was much more to see. Patches of hard coral were interspersed with row after row after row of starfish — I stopped counting around fifty. And there was no false sales pitch here. We really did stay in the water for as long as we wanted. For me, it was about an hour, though Anders stayed in for an extra thirty minutes or so. When I was in the boat, I couldn’t get over how slow it was moving — it had seemed like we were torpedoing forward when I was being dragged behind it! You can see footage from our tour in this video. 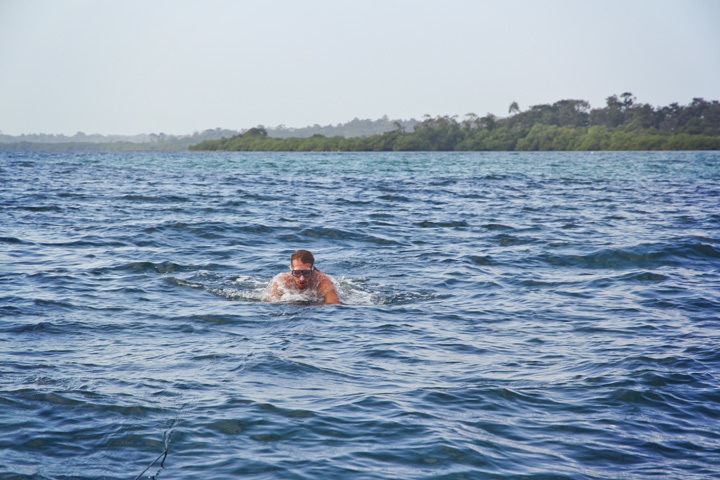 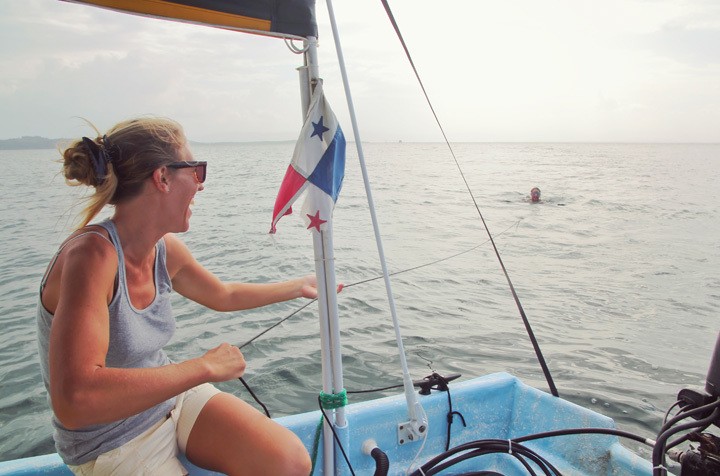 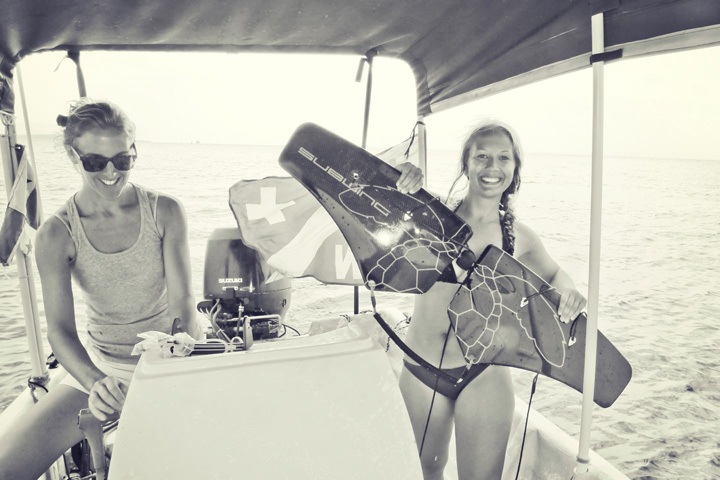 If you’re coming to Bocas del Toro to try this unique new watersport, I’d recommend checking out Coral Surfing — they also do trips to Zapatilla, so you can get the best of both worlds. But regardless of who you book with, I strongly suggest you wear a one piece bathing suit. I spent a decent amount of time on both tours worried I was about to moon all of Bocas del Toro. At least that would be one benefit of the no camera situation.

Have you ever heard of deep boarding/coral surfing? Would you try it?