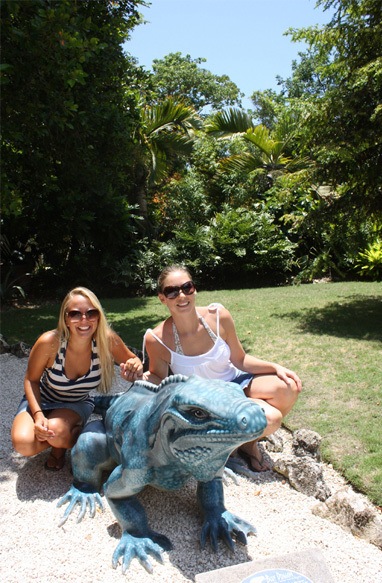 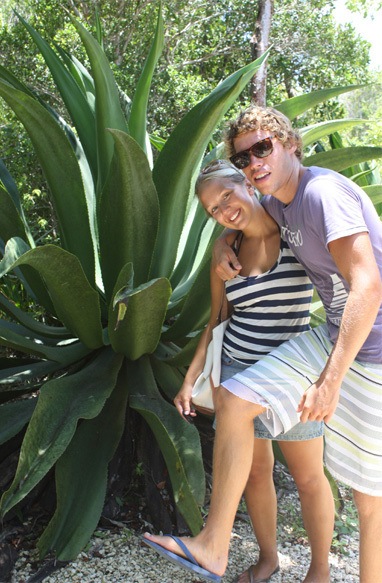 The Botanical Park was one of the few things left on my list of “must do’s before departure.” It was Mark’s day off and he and Kirsten and Adrian were very kind to humor me with a visit there en route to our old favorite, Rum Point.  Of course the day we decided to take our little road trip was the most blazing hot day I remember in ages, so I knew I’d have to hustle to see the park. We entered down a long road, paying at a small ticket booth, and entered a parking lot where I was delighted by this sign: 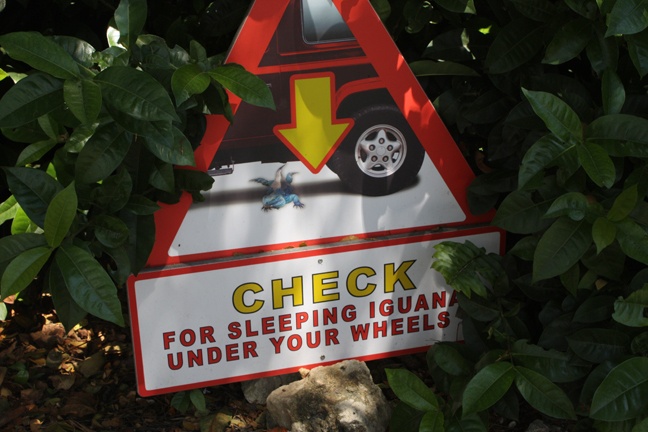 Why was I so thrilled by the idea of checking my tires for iguanas? My main interest in the Botanical Park and it’s greatest tourist draw is the Grand Cayman Blue Iguana, a critically endangered species native to Grand Cayman and found no where else on earth. The iguana is so endangered that by 2002 it was officially awarded the title of most endangered iguana on earth, a kind of bittersweet win I think. There are about 40 iguanas in the park however I had no idea how shy they were and what our chances of spotting them were. 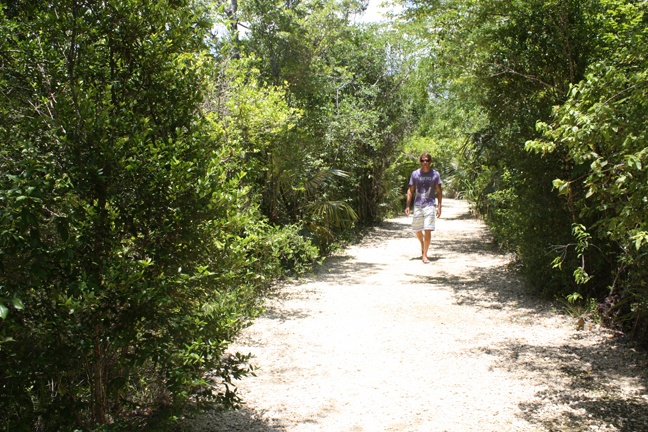 We happened to visit on what seemed to be the hottest day of the summer, so I knew I wouldn’t have long before my group faded. We started around the Woodland Trail, which was somewhat sparse, and just as I was beginning to lose faith we heard a rustle in the bushes. 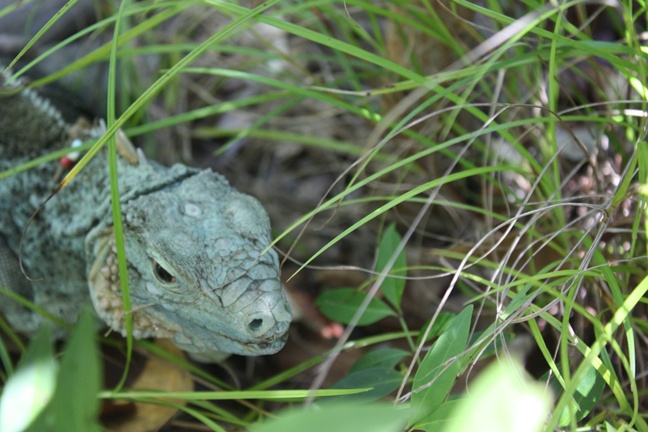 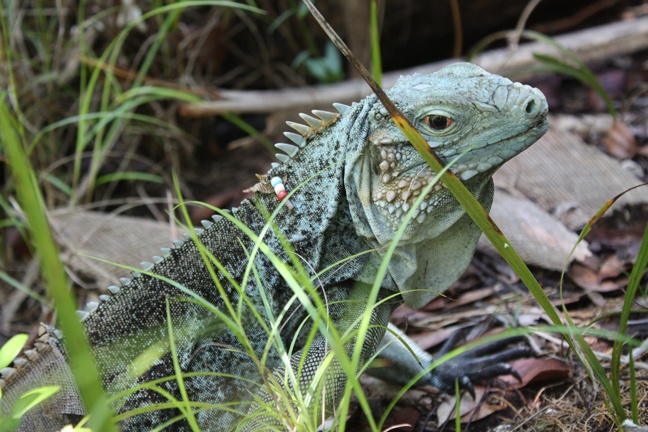 They really are blue! We walked the rest of the way around with one more spotting, but both were pretty shy. At this point we had to take a shade and water break and there were some suggestions of heading out to the beach. But I had yet to see one measly flower and I was not leaving this Botanical Park without doing so.

We wandered through some mildly interesting gardens before hitting the highlight, the Flora Color Garden. Along the path flowers were planted and grouped by, you guessed it, color, a really unique idea carried out on a large scale. It sounds like such a simple idea but I have never seen anything like it. Walking along the winding path the flowers changed from purple to red to orange to yellow. On our way out we stopped by the very pretty lake where I added yet another photo to my hilarious sign collection.

Finally we resigned to the heat and headed back where we started. As we turned around a corner, smack in the middle of the trail was the largest reptile I’ve ever seen. We all stopped dead in our tracks and just stared, afraid to scare it off. We soon realized it was going nowhere soon and in fact seemed very unfazed by our giddy presence. Adrian concluded that this was now a worthwhile stop. Iguana spotting mission: complete. 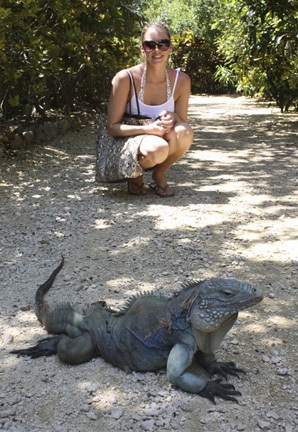 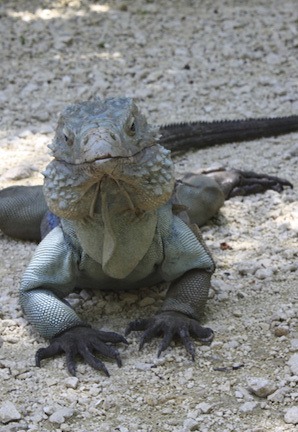 Lowdown: There is a small visitors center that you will walk through and then enter the main event, the Wooded Trail. The trail is about 3/4ths of a mile and takes about half an hour to walk, and this is prime iguana spotting territory. Other attractions include the lake, the Palm Garden and the Flora Color Garden. Iguanas aside, the color garden was the most impressive part of the botanical park.

One thing I think looked very cool but was sadly outvoted on was the Blue Iguana Safari. It’s a guided tour starting at 11am every day except Sunday. It lasts an hour and a half and costs $30US, which includes entrance to the Botanical Park and the Iguana captive facility as well as a fully guided tour. I’ll just have to save that for next time! 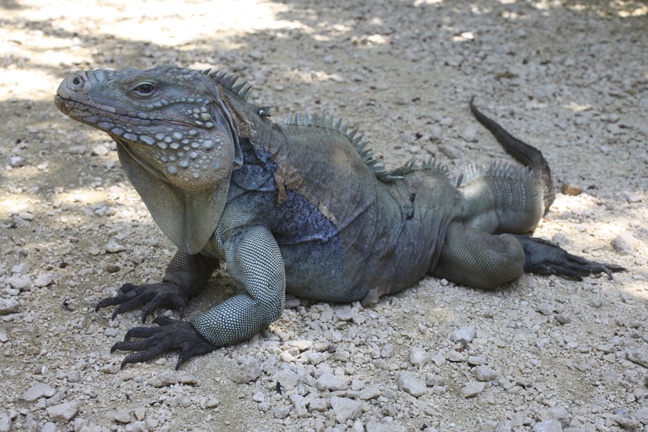 Time: We spent about an hour here total. I would recommend going on a cooler day, in which case I would have stayed longer. 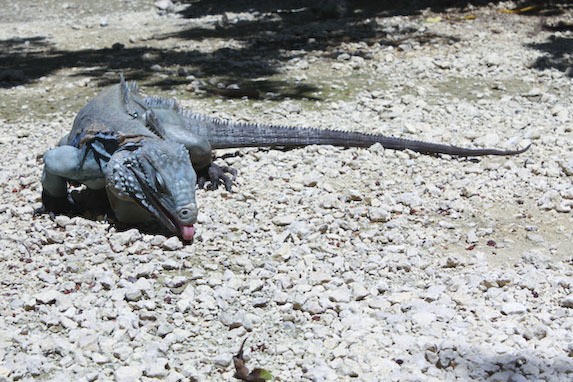 Overall: 3/5. Without the iguanas this park doesn’t stand on it’s own, but they are enough to earn the park 3 stars. While it means that there are no guaranteed sightings, I like that the iguanas are wild because it adds to the fun of the hunt.

I wouldn’t recommend coming out to this part of the island for the Botanical Park alone, since it’s a bit of a hike, about 25 minutes from Georgetown off Frank Sound road. However due to its location it’s perfect to combine with a visit to Pedro St. James, the Mastic Trail, or of course Rum Point. http://www.botanic-park.ky/