There’s something a little corny about going all out on alliteration in a kooky title like Crazy for Corning, but what can I say? It’s simply the kind of sweet small town that inspires such silliness. 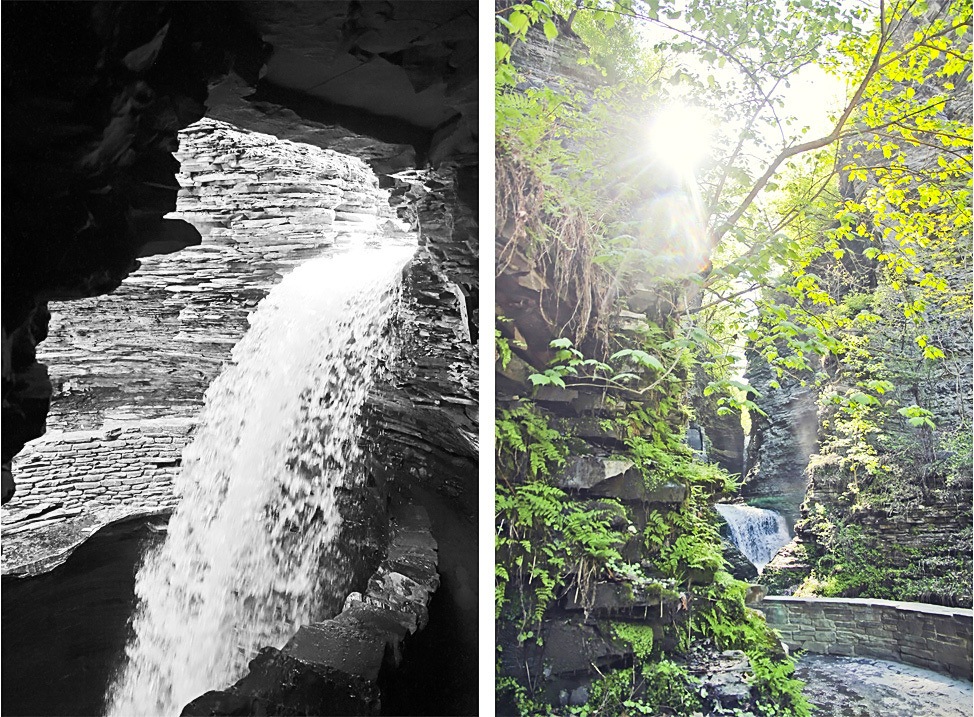 Alliteration and corniness aside, there is something cool about Corning. While Corning is often lumped in with the Finger Lakes, it’s actually about a thirty minute drive south of the Southern tip of Seneca Lake. As we were coming from Keuka Lake, we decided to swing by Seneca on our way. After all, there was one natural wonder I just knew I couldn’t leave the region without seeing — and that was Watkins Glen State Park. 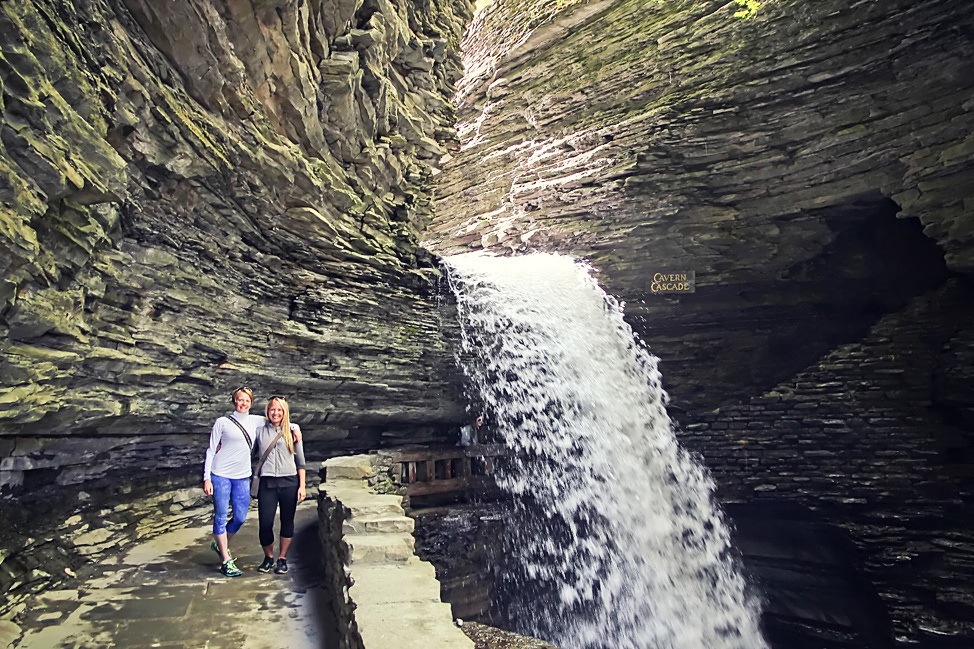 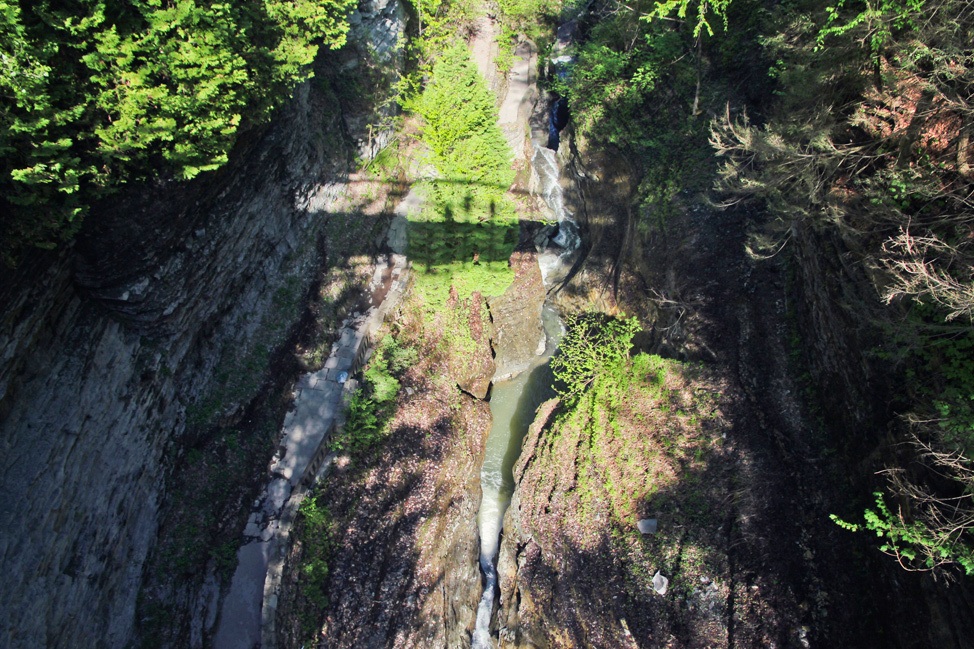 While about half of the two-mile main trail was yet to open for the season, we were lucky enough to be joined by one of the park’s lively rangers for a tour of what was already open to hikers. Waterfalls gushed with life, our cameras snapped furiously, and both Margaret and I vowed to return someday for the full trail. It was a reminder to me that New York is brimming with natural beauty, and I need to remember to give some love to the State Parks around my hometown of Albany sometime soon as well!

Before heading off, we decided to take a quick peek at Seneca Lake. While not quite as scenic as Keuka from this particular vantage point, Margaret did have some pretty enthusiastic ideas for how we could spice up the shot. 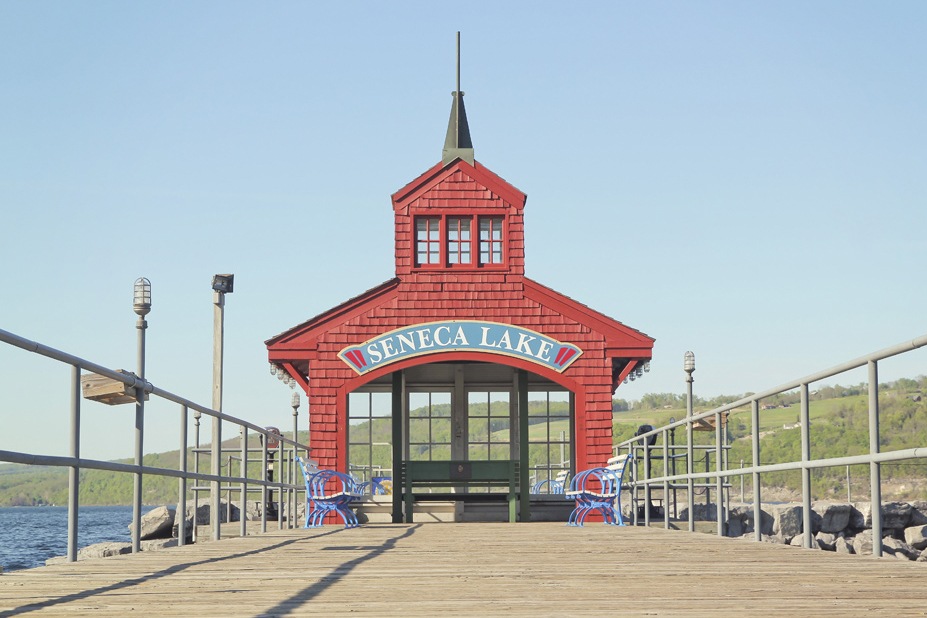 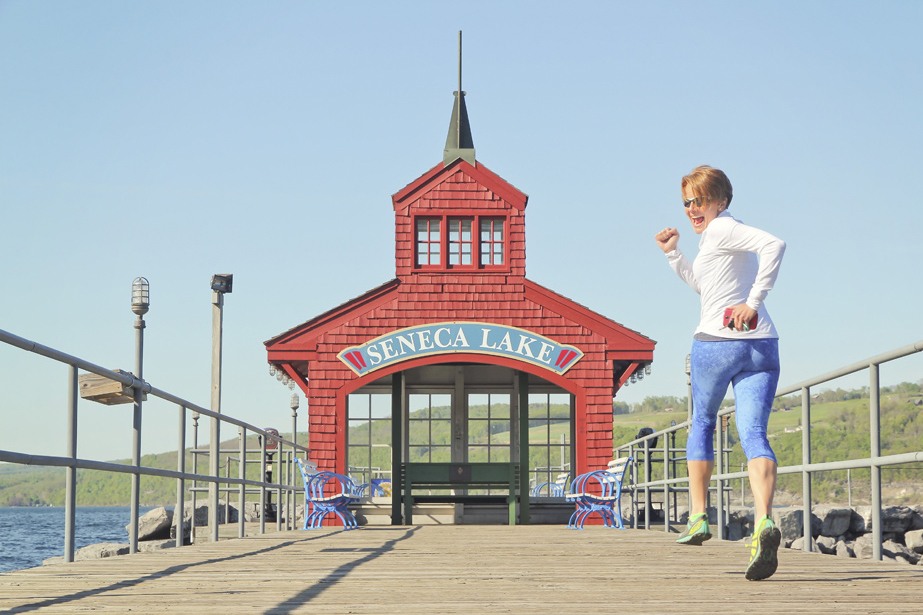 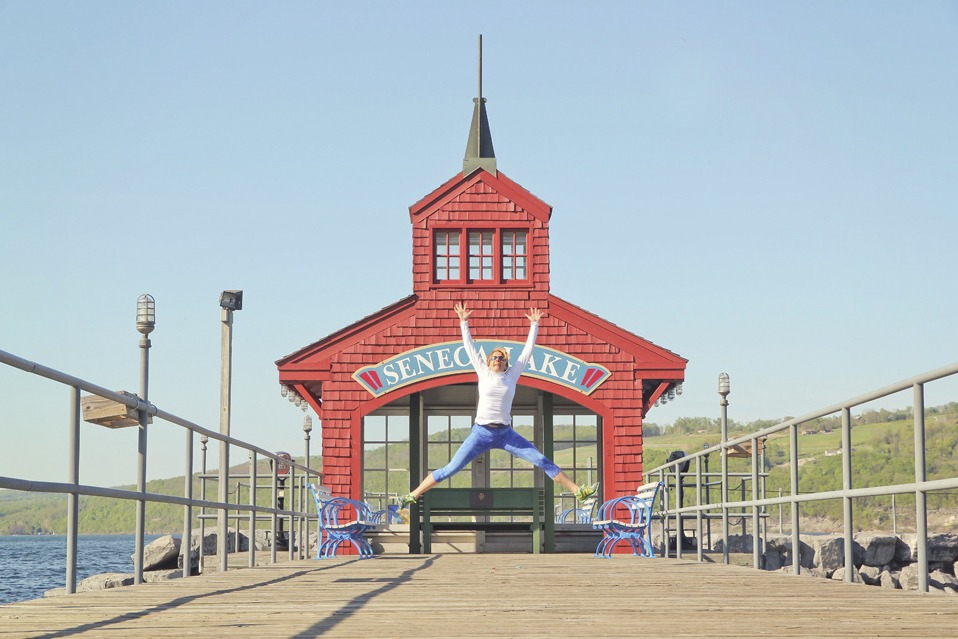 Driving into Corning, we were both unsure what to expect. The only thing we knew about the city was that it is home to the Corning Museum of Glass, where we had a full day of fun planned ahead. But what else? Having had my expectations exceeded and beyond so far, I was pretty excited to find out.

Our first stop, just a short stroll from our modern digs at the Raddison Hotel Corning, was Corning’s Gaffer District. Historic storefronts boasted trendy eateries, chic salons and bustling artists’ studios that seemed to stretch for a mile. Vintage cigar shop signs hung next to hand-lettered chalkboards promising the best pizza in town. An upcoming events calendar sold us on a lively scene of arts and music festivals. This is the kind of American main street that movie makers scramble to recreate in studios. 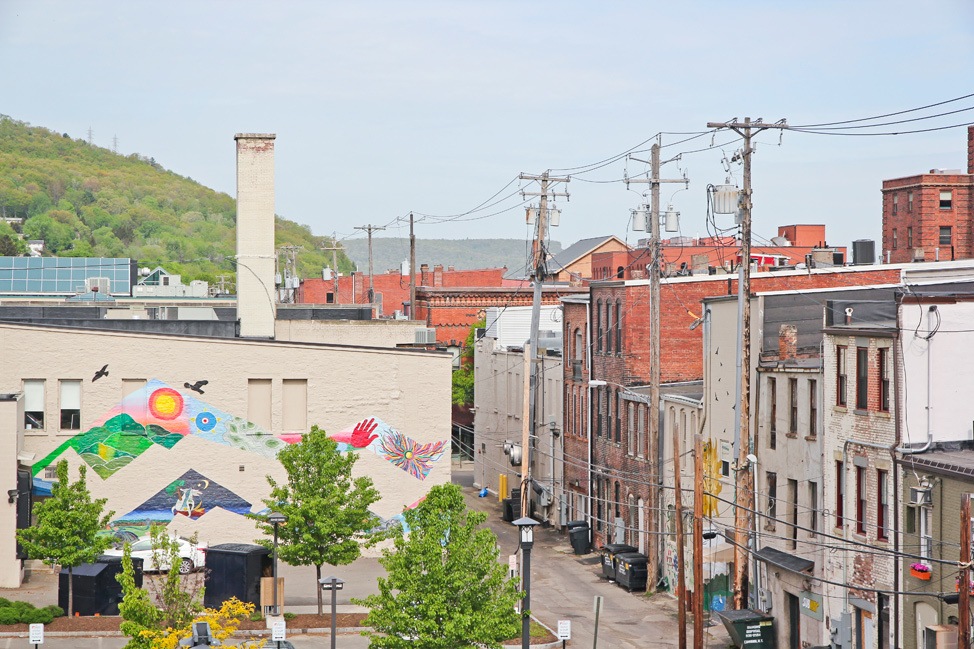 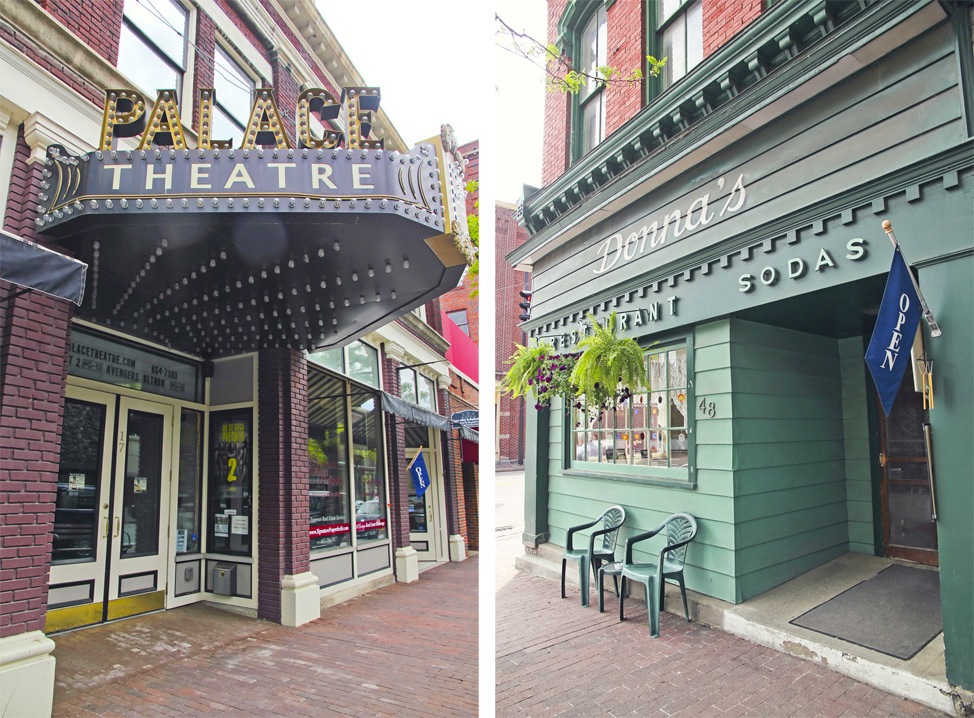 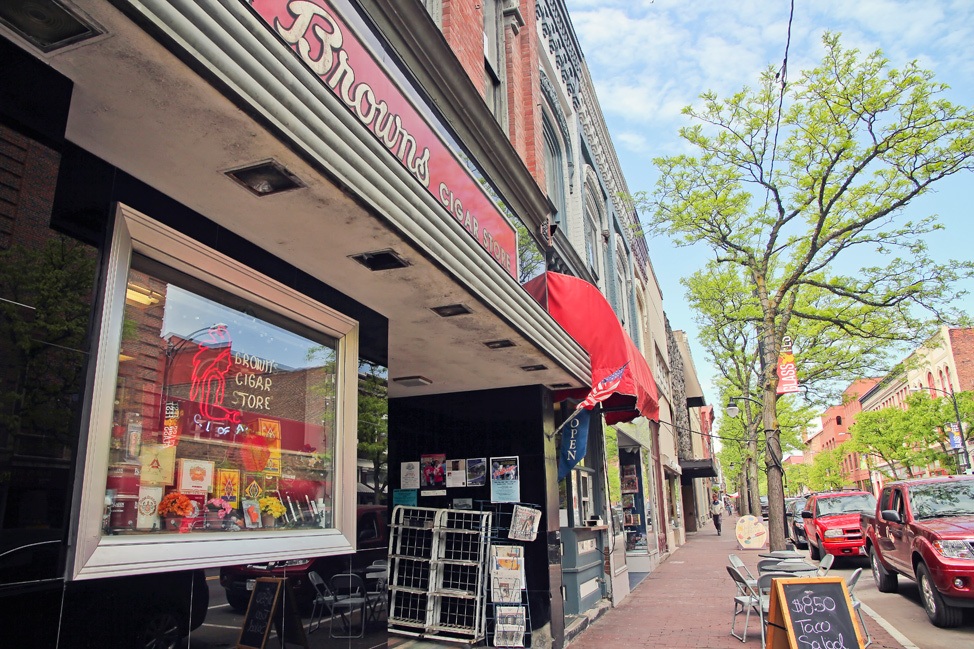 It was the perfect destination for a little window shopping and sightseeing. “Corning must have the most beautiful people in the world,” Margaret remarked, as we passed what felt like a dozen beauty salons. I was itching for a cut and color by the time we reached our destination. 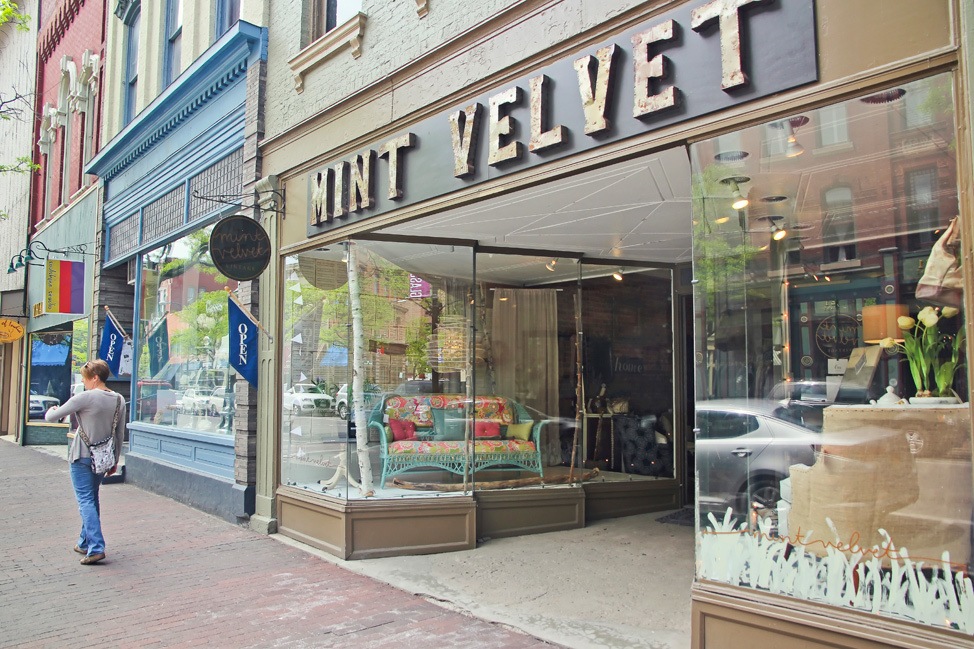 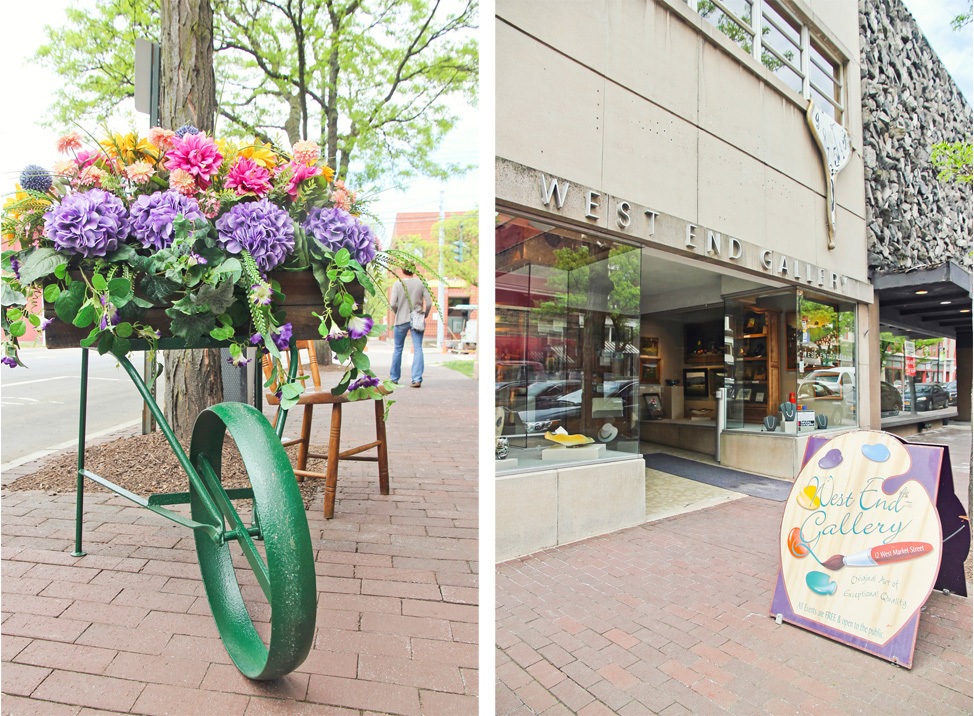 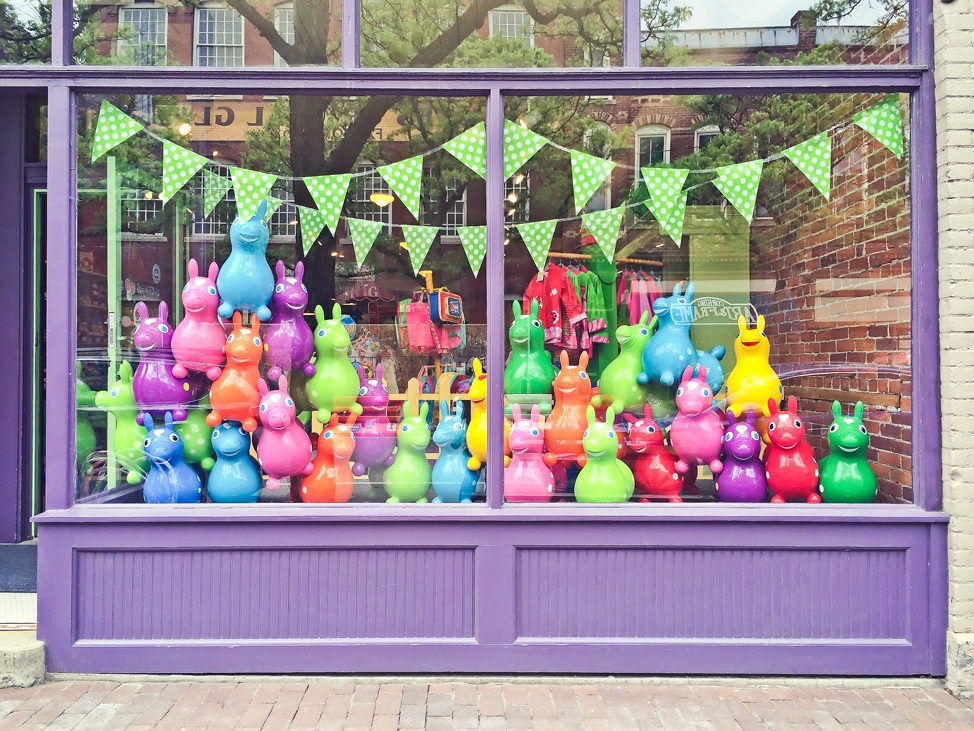 But I’d settle for a drink and dinner instead. I admit, Hand + Foot had us both erring a bit on the skeptical side based on the name. I mean, I love pedicures as much as the next Corning salon-addict, but I don’t really want to think about feet when I eat. That said, all thoughts of appendages went out the window when we stepped into an eclectic dining room that would have fit right in on a hip street in Brooklyn. 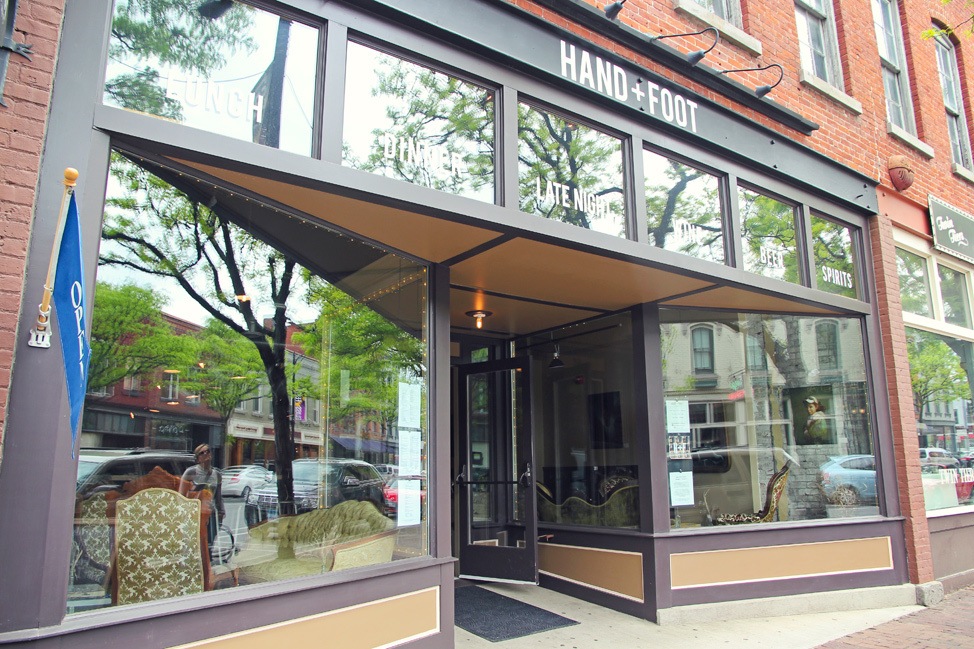 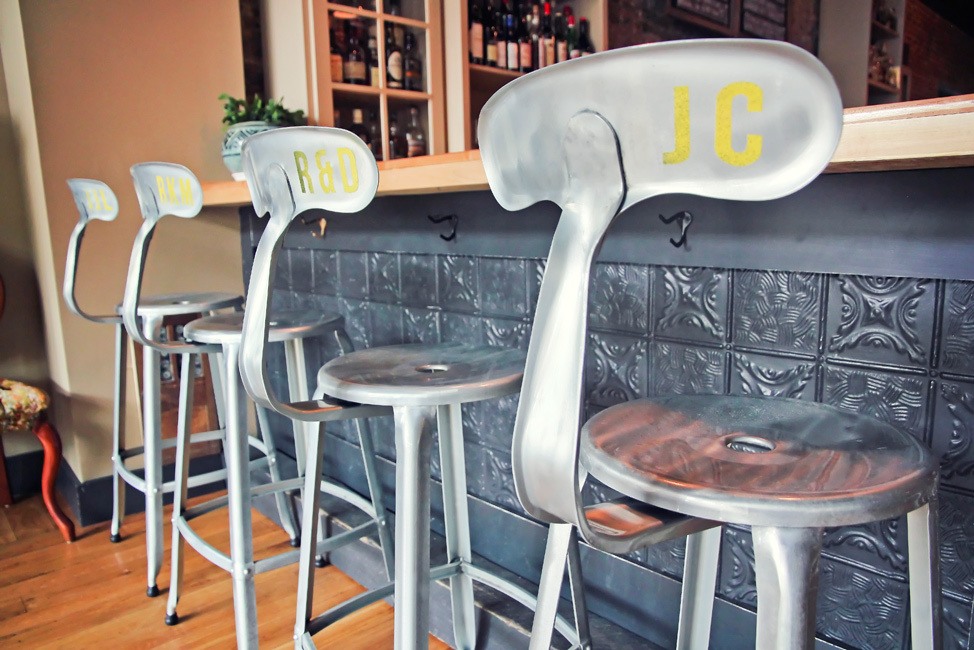 The menu was a creative conversation piece — seriously, anyplace with an offering called the %*@! Me Pretzel has pretty much won me over from the salad course. We had such a fun meal here, stuffing ourselves with delicious treats and chatting with the owner, a Corning native who’d recently returned home from — you guessed it — The Big Apple. I loved hearing him talk about returning to his roots, and we bonded over our shared Upstate heritage. 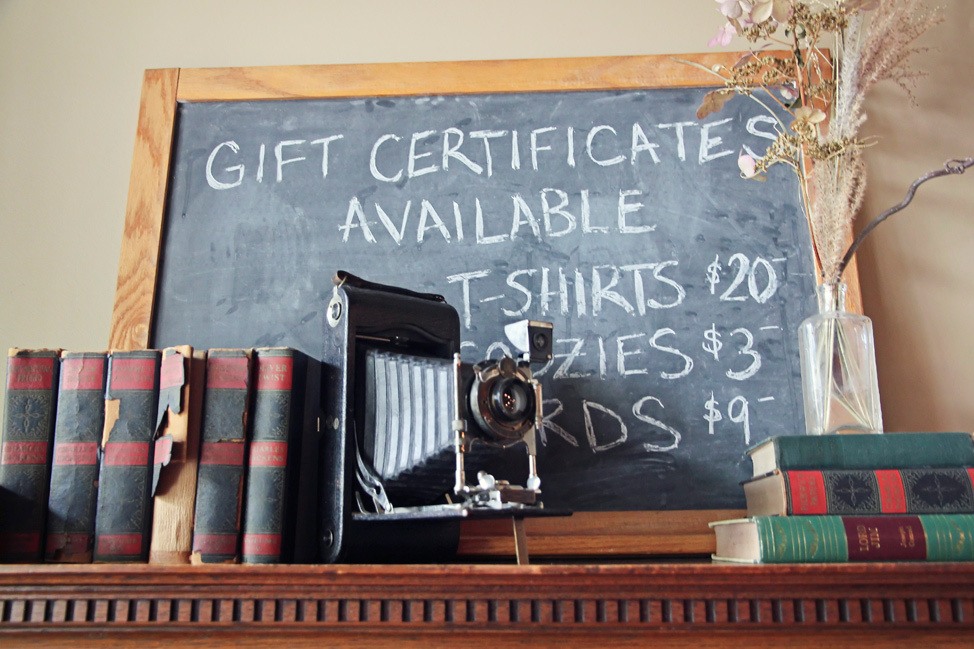 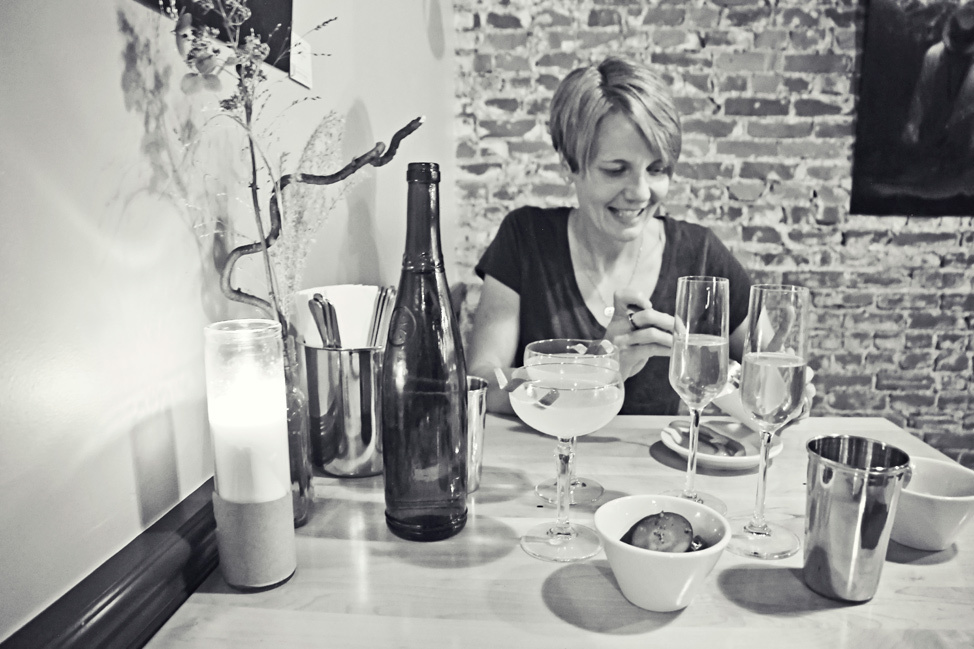 The next morning, we sprung out of bed ready to sample another of Corning’s adorable eateries, this time run by a local mother daughter duo. The Poppleton Bakery and Café looked like it was straight out of Wonderland, winning this Wanderland blogger over right away. I started my day with a granola crepe, simply because I’d never seen it on any menu before. And with Greek vanilla yogurt topped with banana and clementines and fresh granola, it was a gamble that paid off big.

The Poppleton girls weren’t going to let us get away with being quite so healthy though, and sent me away with a big box of treats that had me vowing never to return to Corning lest I wish to gain six pant sizes. They were that good. 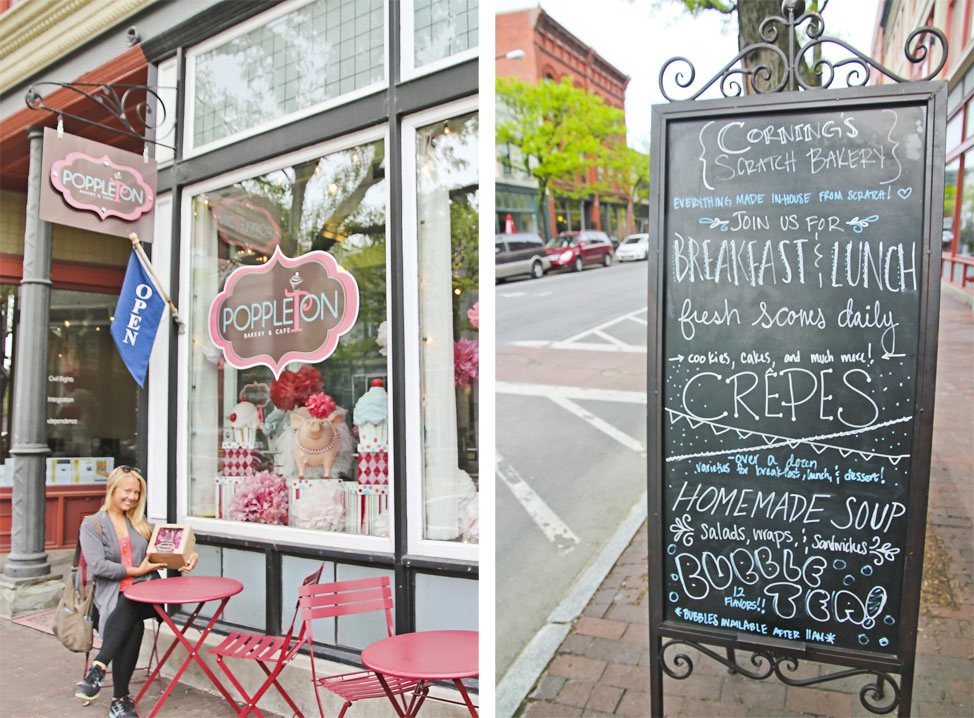 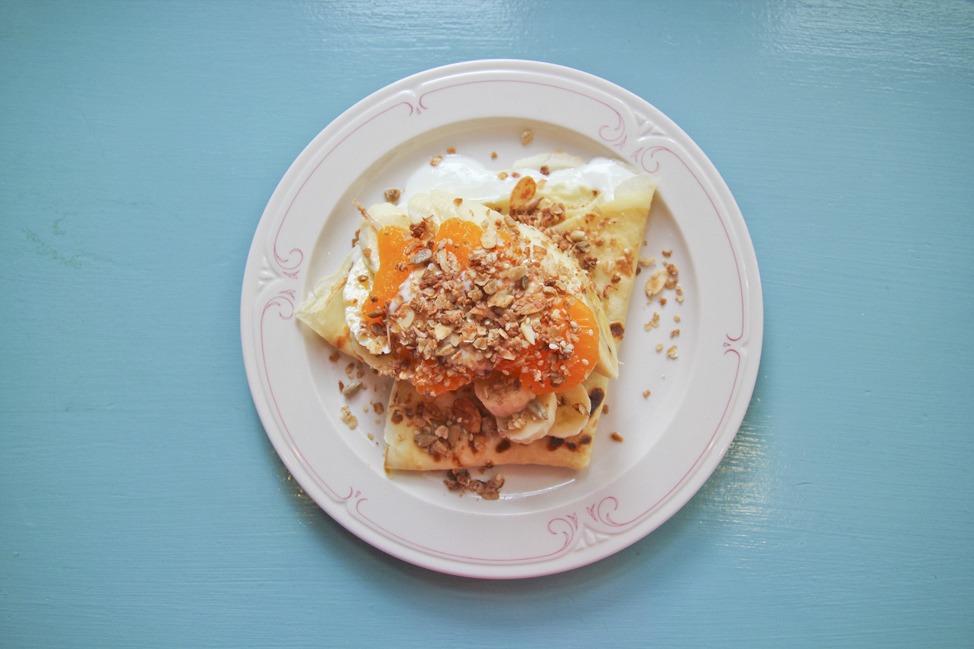 While it was the Corning Museum of Class that brought us and so many others to Corning, we decided to warm up with one of its smaller gallery-filled neighbors, The Rockwell Museum.

The Rockwell Museum’s focus is on Traditional Western and Contemporary Native American Art, which it displays in bite-sized, eye-poppingly bright galleries. I pinched myself when I saw a set of Andy Warhol paintings I’d never seen so much as reproductions of before (no photos allowed of those, sadly) and loved going room to room with my sister picking out each of our favorites from the collections. Don’t miss this museum if you come to Corning — you can get a great feel for it in just an hour. 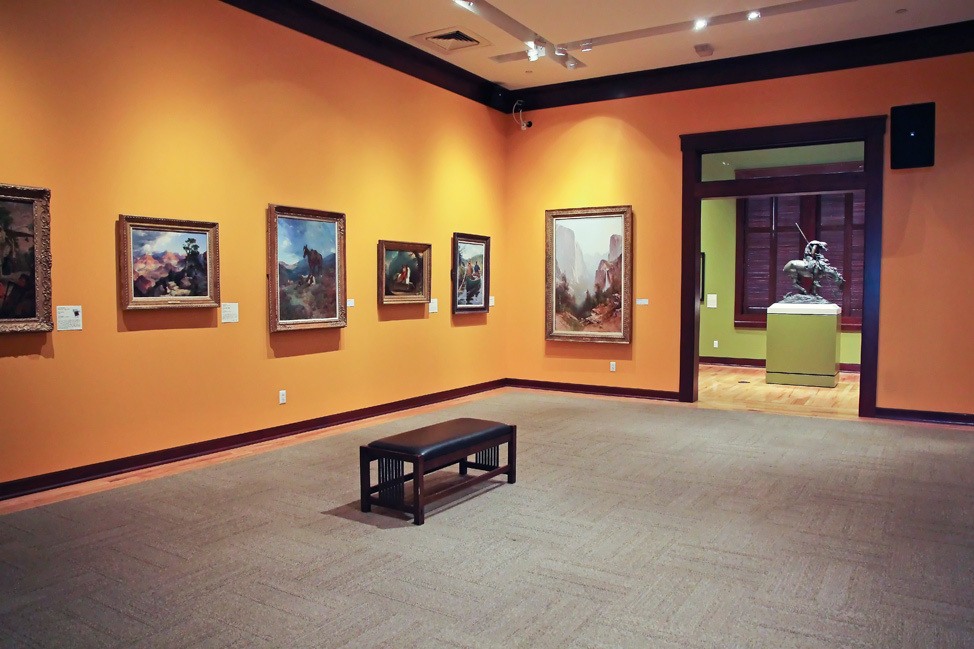 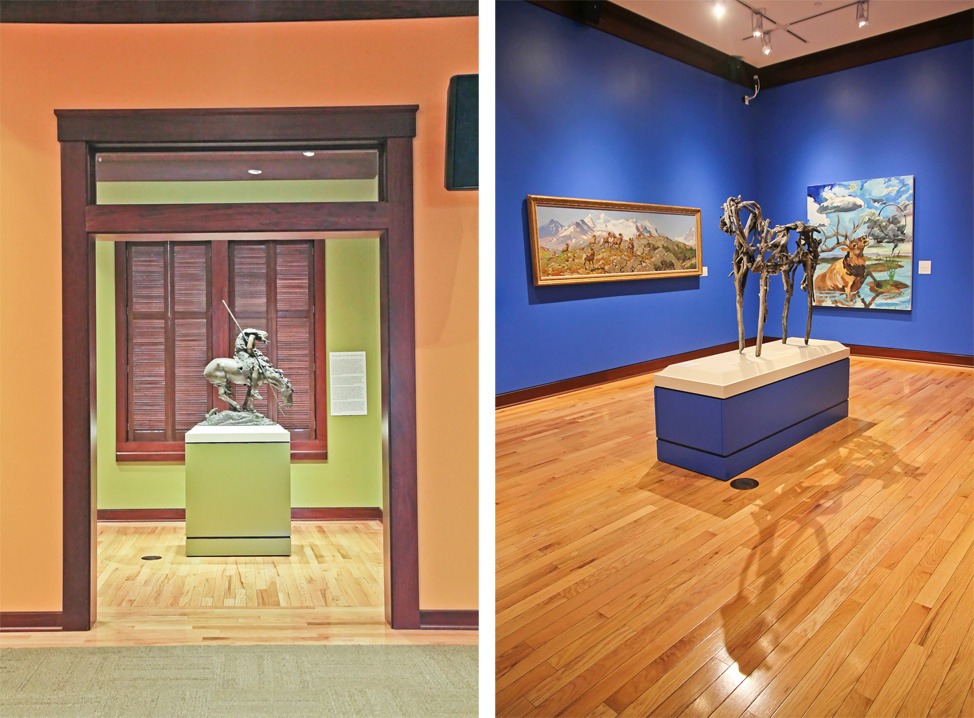 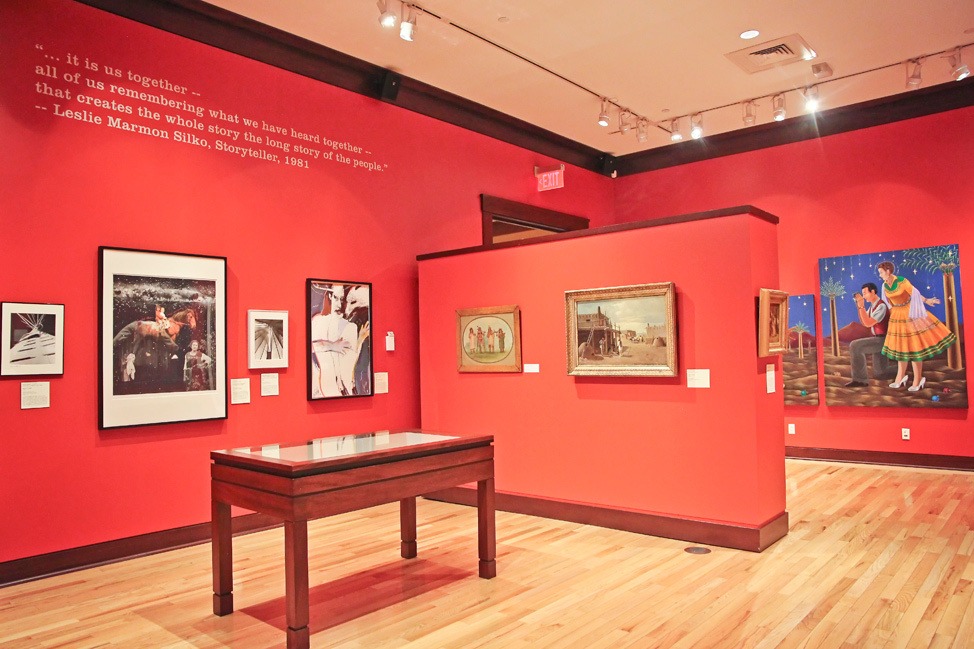 “So… when did Corning get so cool?” Margaret and I took turns pretending to ask Corning residents a question we were starting to suspect the answer to — it has been all along. We’re the ones who were slow to catch on.

And we were about to go behind-the-scenes at the museum around which Corning’s creative heart beats.

Stay tuned for a post on our day at the Corning Museum of Glass!

Many thanks to Steuben County Conference & Visitor’s Bureau for hosting me in Corning. As always, you get my honest thoughts and opinions regardless of who is footing the bill. And big hugs and kisses to my big sis Margaret for being my travel buddy!

A Long Weekend in Waikiki

Sippin’ and Kickin’ Around Keuka Lake Photo of the Week 221: Burning Man
70 Comments...