How Much Does a Month in Paradise Cost?

Recently a Facebook friend of mine was lamenting the difficulties of life in New York, and wishing that she could afford to live elsewhere. My reaction was something along the lines of: “GIRL! If you can live in New York City you can afford to live pretty much anywhere on this planet!” It did get me thinking though, about how my cost of living has changed from the days when I used to pay about a grand a month for my share of a four bedroom, one bathroom apartment in Not-Even-That-Trendy-Part, Brooklyn.

I often found myself complaining, too, about the cost of living in Gili Trawangan, which is shockingly pricey by local standards. But compared to what I was shelling out a few years ago, I really am getting a bargain for a life five minutes from the ocean. Ever dream about getting away from it all for a month or two on a tiny blip of sand in Southeast Asia? This should give you an idea of how much to save up for. For this post, 10,000 rupiah is equal to one dollar. 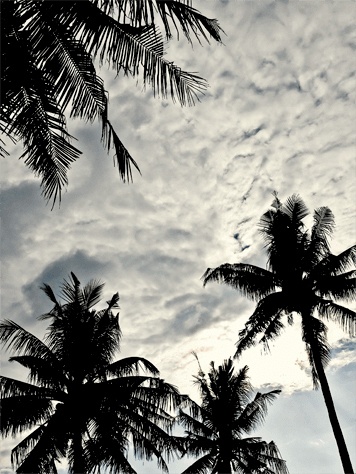 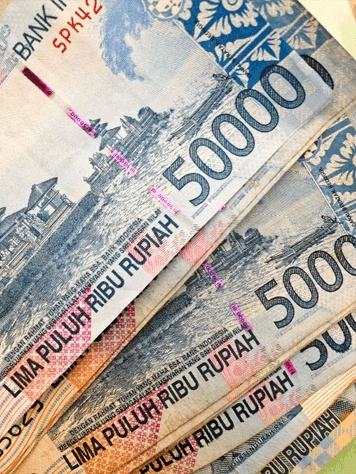 While monthly rent rates in Gili Trawangan are a poor value compared to other islands in Southeast Asia, they are still a bargain compared to rents in the Western world. Gili Trawangan is a very small island and rooms and homes are build very close together — don’t expect a lot of privacy. Also keep in mind that wifi is NOT the norm and if you need it your selection will be greatly decreased.

For around 1.5 million rupiah, or about $150, you can expect a basic room with a mattress on the floor, a fan, and a cold, brackish water shower. For 1.7 million, or $170, you can get a room in a shared house with a mini kitchen and a real bed off the floor. When you start looking for WiFi, selection is limited and prices increase sharply — air conditioning even more so.

Moving up to 2.5 million, or about $250, you can expect a slightly nicer room, probably still a mattress on the floor, a cold brackish water shower and — here’s the kicker — wifi!  Moving up to 3.5 million rupiah, or $350, you can get a room with a real bed, air conditioning, a warm water shower, and wifi.

My first round on Gili, I lived in a room for $250 at Koi Gili, and I loved it! The wifi was the best on the island, and I loved my little balcony — despite the fact that there was no sink and the shower was broken so I had to bathe using the foot tap. The guys there are a bit sketchy though and wanted to charge a ridiculous rate when I came back for high season. Luckily Anders found us a room at Hook’s for $250 where we had a cute balcony, a fantastic shared garden space, and good wifi. Unfortunately the shower was torturous and the mosquitoes were bad and the power cut out with shocking frequency, but the guys who run the place are really sweet it had a wonderful vibe. We split the cost which made it incredibly affordable. 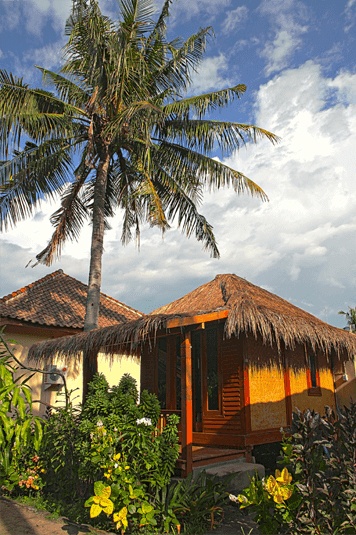 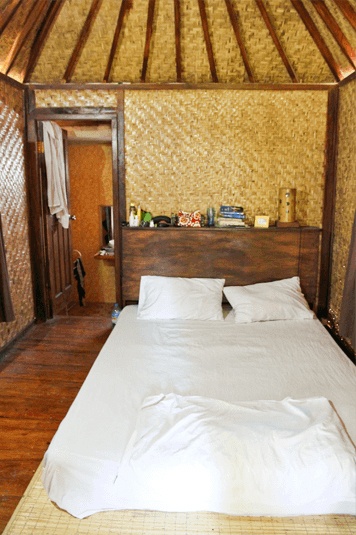 Our bungalow at Hook’s 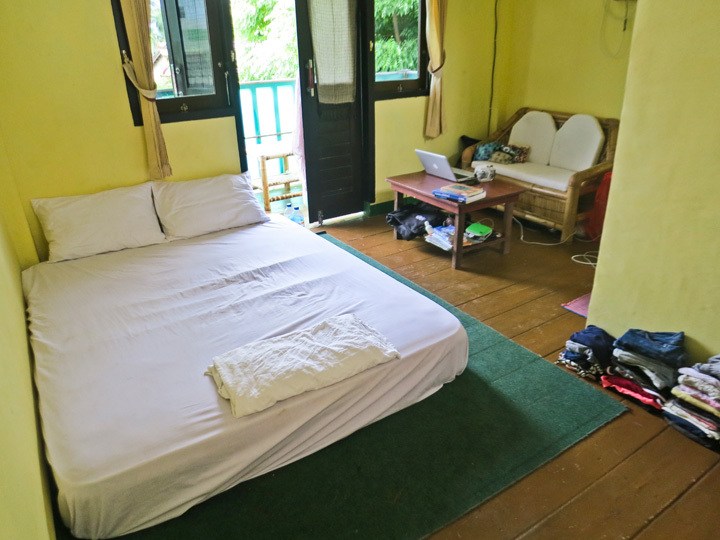 My room at Koi Gili 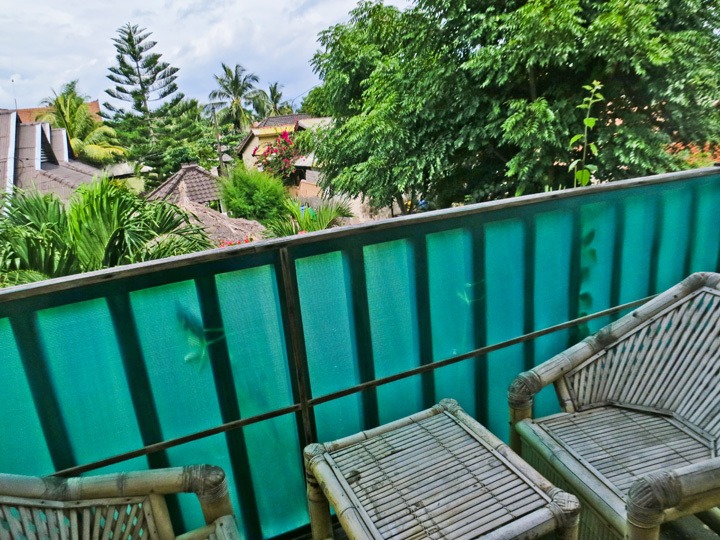 My balcony at Koi Gili

For breakfast, I alternated between eating the oatmeal I’d brought from home and buying a smoothie from a street vendor ($1.50) and a small piece of banana coconut bread ($0.50).

For lunch, I typically visit a local warung and get a banana leaf filled with chicken curry, fresh vegetables and rice for $2.50. Alternatively, I might grab a fresh baguette BLT from Dolce Vita — the cheapest sandwich spot on the island — for $3.

For dinner, I tended to splurge on Western meals and nice dinners out with friends. This can range from $6-12. Some of my favorites being a margarita pizza from El Pirata for $6, or a Thai curry from Cafe Kecil for $7. Some nights, I’d go cheap and get a pasta from Oceans II for just $2, or head to the night market and get local food — BBQ skewers and vegetables for $3.

To drink I either buy a large 1.5L water bottle for 50 cents or refill for 30 cents. I sometimes splurged on a Diet Coke for $1 (much more expensive at restaurants). 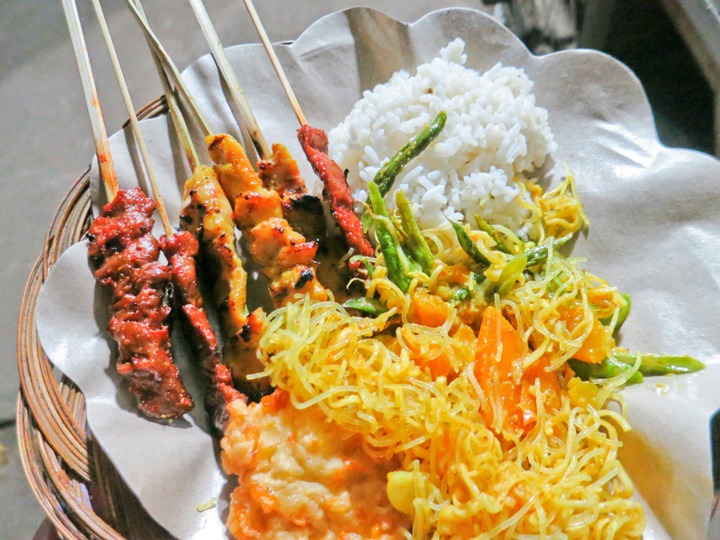 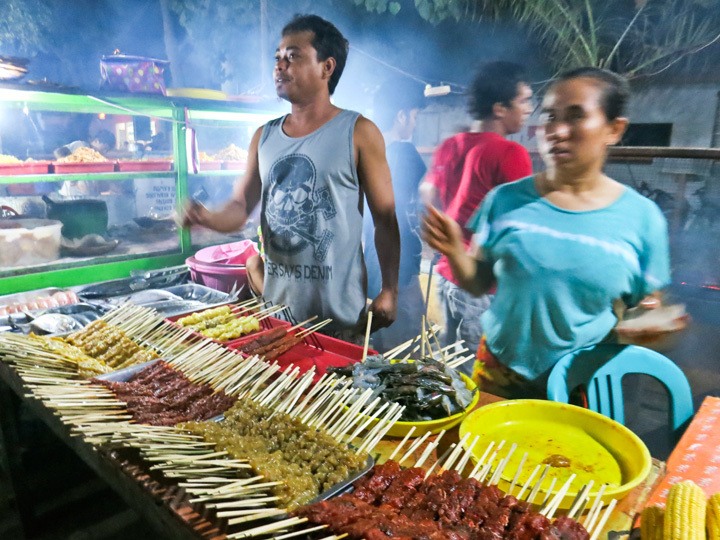 Obviously this is a category that will also vary wildly based on how hard a person likes to party. Irish Bar is the drinking establishment I most often found myself at, along with most of the island expats. There, beers are $2 for a small and $3 for a large, cocktails are $2-4, wine is $4 a glass and a Vodka Joss shot (a Gili specialty!) is $2.50. Those represent good prices for the island, though the Gili Hostel has the cheapest Joss shots around at just $1.50 each. One fun splurge is a night on the Gili Party Boat. There’s a $25 entrance fee that includes a light Thai dinner and a boat ride around the islands, and drinks are only $2.50 each.

My first stint on Gili found me partying often, though my second trip fell over Ramadan and so things were much tamer. A really blowout night where I was at the bar buying rounds till the mosque calls started rarely cost me more than $30. Often it would just be a cocktail or two at sunset instead. 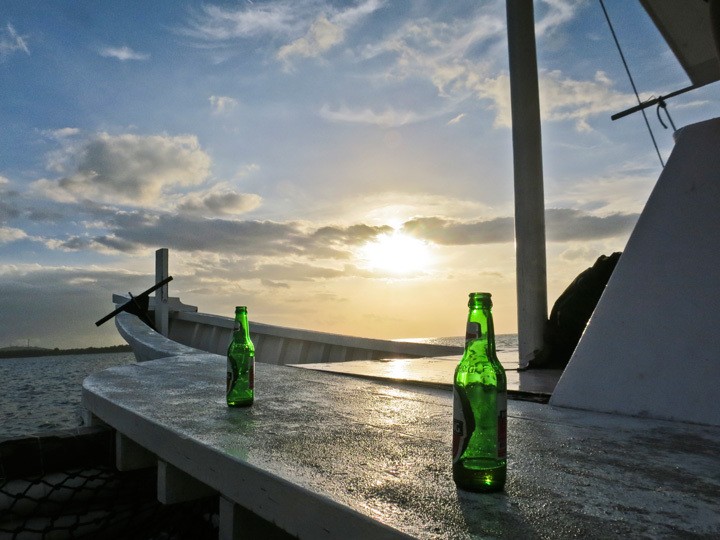 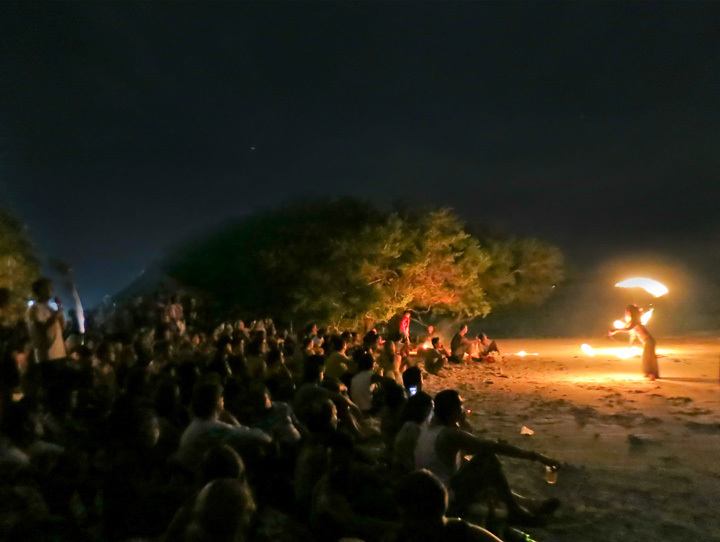 Entertainment is the cost that will vary the most wildly. Some travelers will be happy to do little more than stroll around the island to watch the sunset, swim in the ocean, snorkel on the reefs, and perhaps surf the occasional breaks. Assuming you have all the gear you need, those activities are all free! Or perhaps — ahem — you work online, and your days are filled with freelancing assignments and blog posts. In those cases, your entertainment cost can go all the way down to zero.

A divemaster course is probably one of the most expensive ways to entertain yourself but also one of the best values — after all, you’ll come out with a professional diving certification that could earn you income. It will cost around $1,000 but provide entertainment for two months, so work out to $500 a month — and you’ll have little time to do anything else. There are also beginner dive courses, freediving courses, and fun diving packages available.

Aquatic adventures aside, there are classes for yoga, cooking, and horseback riding. Yoga classes at Gili Yoga are somewhat pricey, though with a ten class card the price goes down to $6.50 per class. Cheaper yoga classes are available at the Gili Hostel. Cooking classes at Gili Cooking are $40 per class.

For those looking for a little relaxation, there are plenty of spas around. Prices are high compared to Thailand or Bali but still cheap compared to the Western world. At Exquisite, one of the nicest spas on the island, massages are $18, while at Abdi, a new favorite, they go for $14. You can find them as cheap as $10 but the atmosphere will not be inviting. 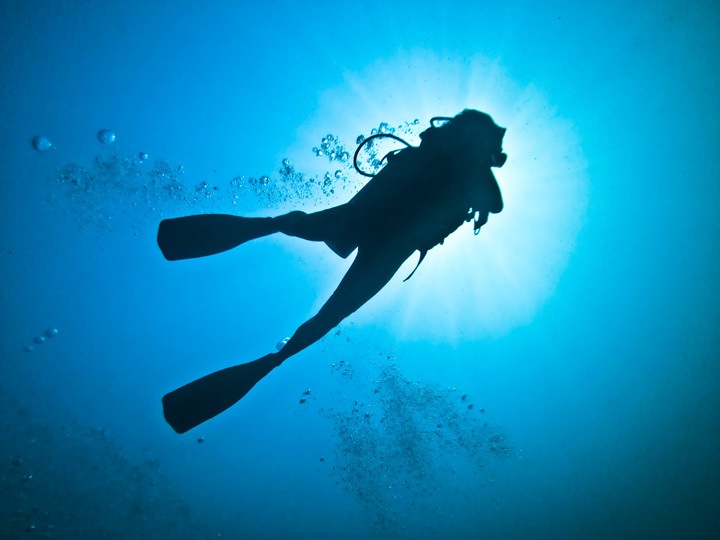 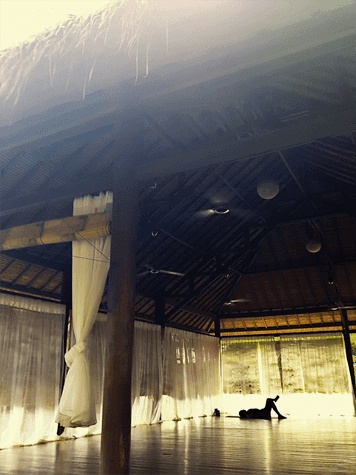 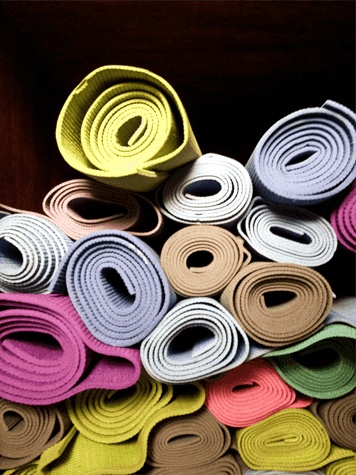 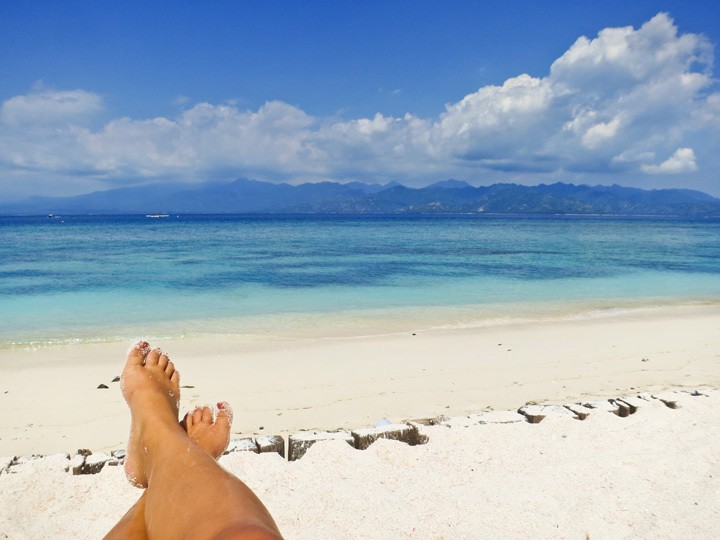 Gili Trawangan is blessedly small, and it’s perfectly possible to use your own two feet to navigate the entire island. Those who don’t want any limitations on their mobility might consider buying a bicycle. I paid 400,000 rupiah (about $40) for mine, and sold it when I left for 200,000 rupiah (about $20). I probably could have gotten more for it had I not lent it to one friend who went on to crash and trash it, and then sold it when I left to a different friend who I didn’t want to overcharge.

Of course, you will have to get to and from the island, which is very expensive. Typical prices are about $100 round trip from Bali, though you may be able to get a 50% off local rate if you know the right people. All factors considered, in terms of transportation costs it’s safe to estimate $20 for a bike after resale, and $50 for the boat at local price. The longer you stay, the lower that cost will be each month. 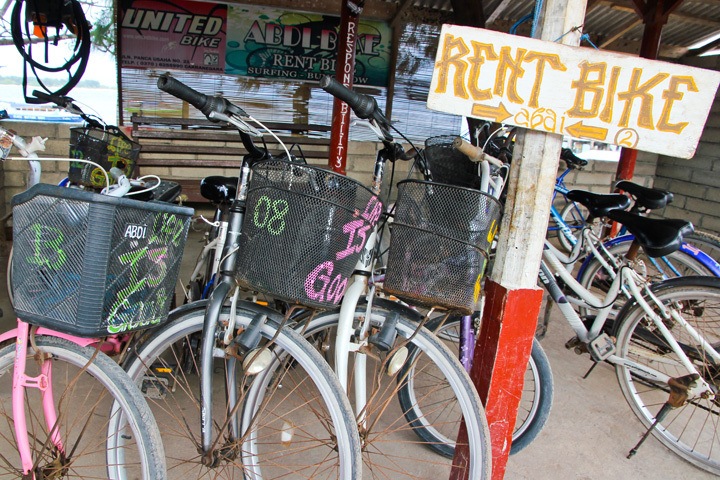 Laundry and shampoo aren’t much fun to budget for but when you are living abroad long term they do eventually come out of your funds. Fair laundry prices on Gili Trawangan are $1.50 per kilo (around 2.2lbs).

Eventually, you’ll have to replace some sunscreen or toothpaste or buy something for those hangovers. Toiletries are extremely overpriced on Gili Trawangan — if you know you’ll be staying for a while, bring as much as you can from off the island. A small bottle of aloe aftersun will cost around $9 — the same bottle would be $3 on Bali.

A local phone will be a great investment — buy the phone off island if possible to save cash. Topping it up with credit will cost you, though. Most places charge a 20% fee to add credit though there are some shops that only charge 10%. 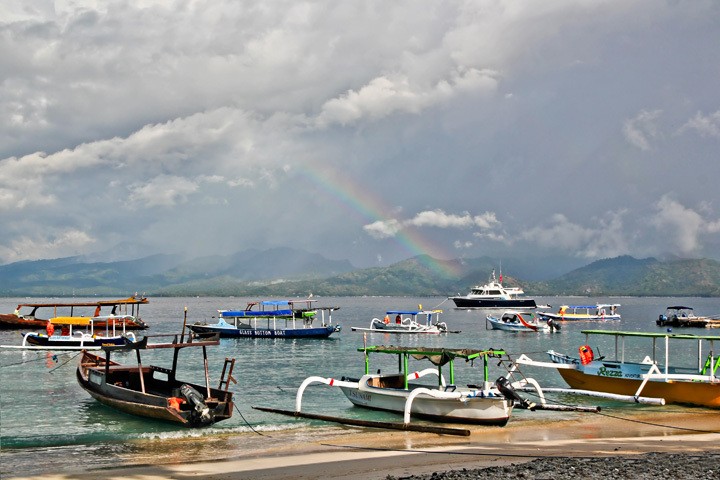 So if you live in a bare-bones room, eat only local food for every meal and always refill your water bottles, don’t drink alcohol, walk everywhere and only do free activities, you can get by on a mere $400 per month.

If you come to the island for two months to do your Divemaster course, live in a decent room with wifi, drink and eat Western food occasionally, buy a bicycle, and maybe splurge on the occasional massage or yoga class, you are looking at closer to $1,300 per month.

Of course my estimates here are colored by my experience but I consulted friends and did the best I could to be accurate in this post based on my cumulative ten weeks on the island. Prices vary wildly by season. The prices here reflect shoulder season prices. If you’ve had a different experience with the cost of living on Gili Trawangan, let me know!

How much would you pay for a month in paradise?

Announcing The Wander Women + We Are Travel Girls Blogging and Business Retreat in Bali!