Sail Rock is the most renown dive site in the Gulf of Thailand. And it’s kind of let fame go to it’s head. From Koh Tao, you can only get here via special pricey trips that some dive shops run once a week or so. 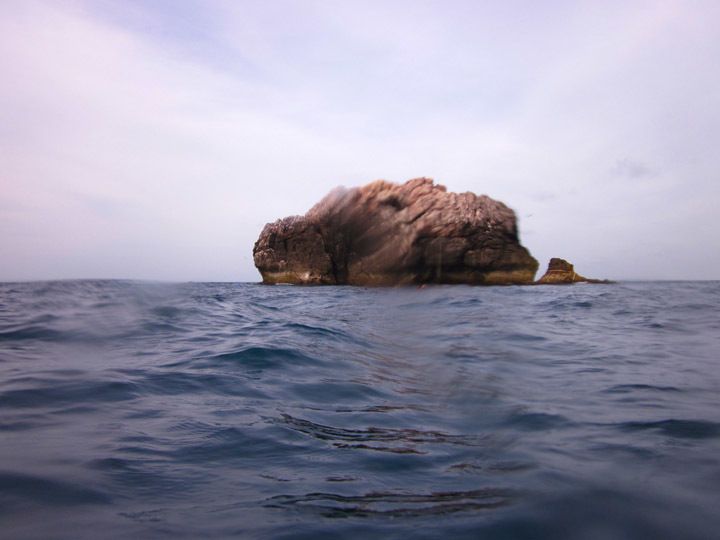 I’ve been to Sail Rock twice now, once while working and once for a very indulgent treat: a fun dive trip with Mark and divemaster trainee friend Kat. Mark and I came armed with one still camera and one video camera and had fun switching off and documenting the day. 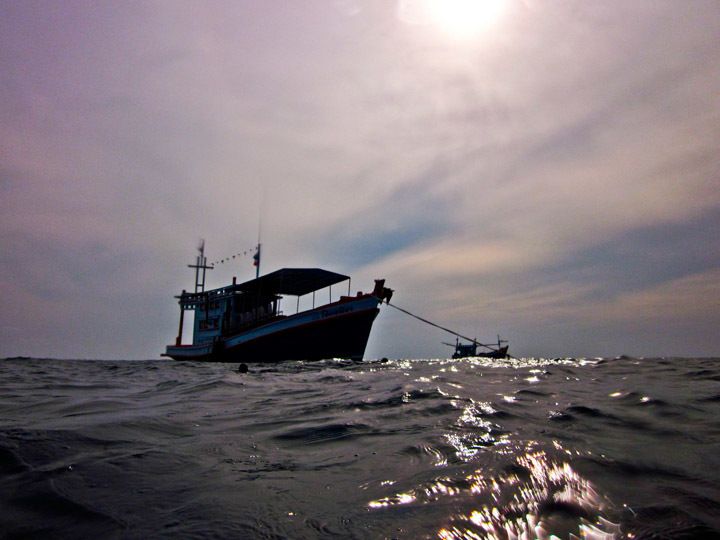 Diving for fun, and diving alone with two friends who are both dive professionals, is such a different experience than diving for work or even for fun but being led by a stranger. We are all self declared “slow divers” and have no qualms about spending seven minutes of dive time staring at a fish and trying to figure out what celebrities they remind us of (or maybe that was just me doing the last part?) 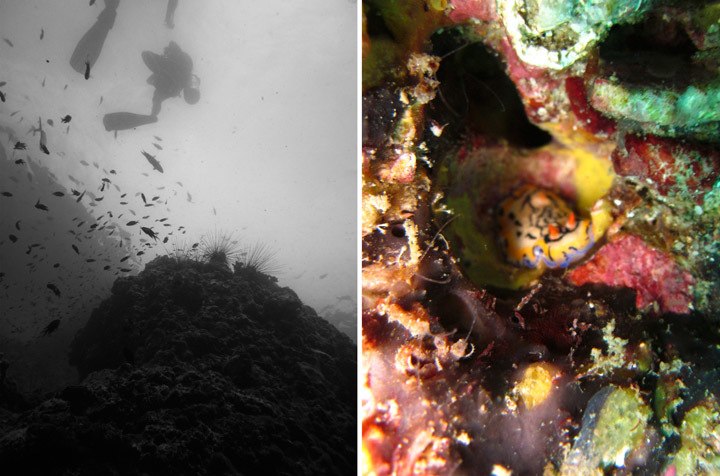 The trip starts with a two hour journey to the dive site, which looks so spectacularly unspectacular that you’re gearing up thinking, “Really? This is it? 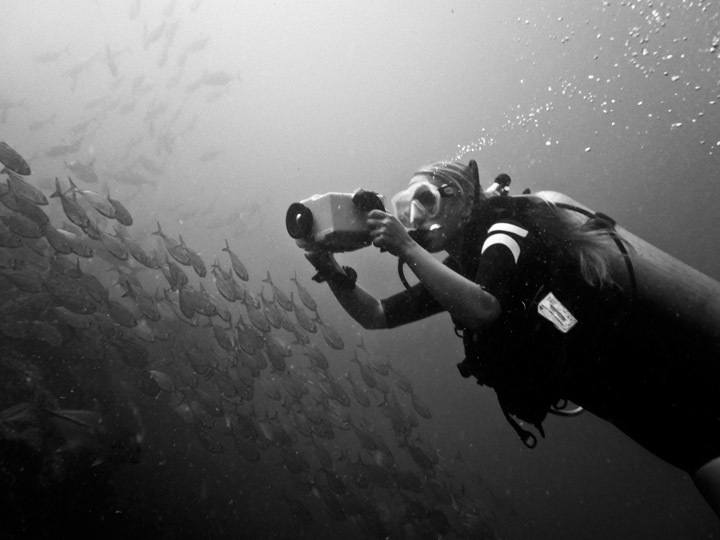 Then you descend the sides of the pinnacle, and you are surrounded by the largest schools of fish you’ve ever seen in your life, and you think, yes, this is it. 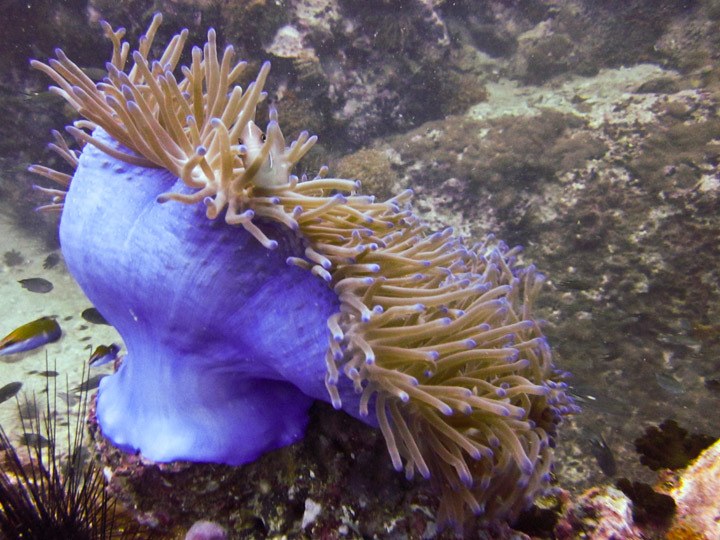 Sail Rock boasts four sides of beautiful walls to explore, a vertical swim through chimney (featured in the video below), and several plateaus teeming with life. Even diving slowly and going deep when we please, we can make it around the Rock in one tank. 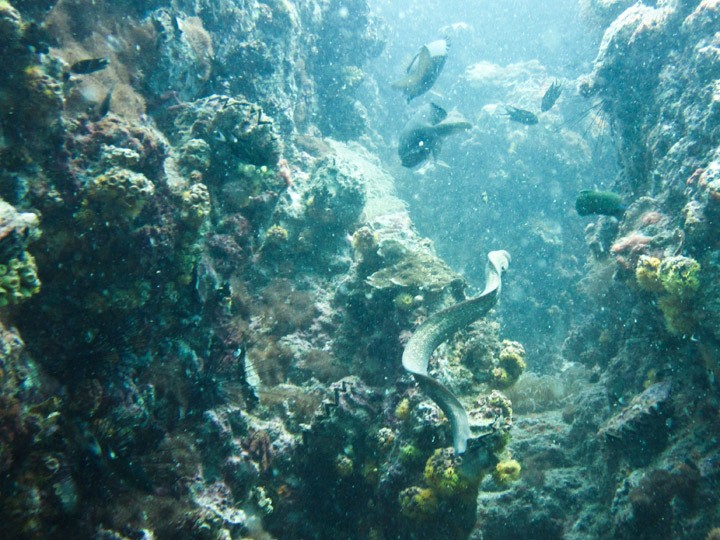 Unfortunately, the visibility this day was pretty disappointing, as you can see from the photo above, taken by Mark, which is otherwise a fantastic photo of an eel swimming through the coral. Sail Rock may be known for it’s large schools of fish, but in these conditions it’s best to look for the small stuff. As I’ve said before, when visibility is poor, it’s best to focus on macro-shots, as it puts less debris between you and the camera. 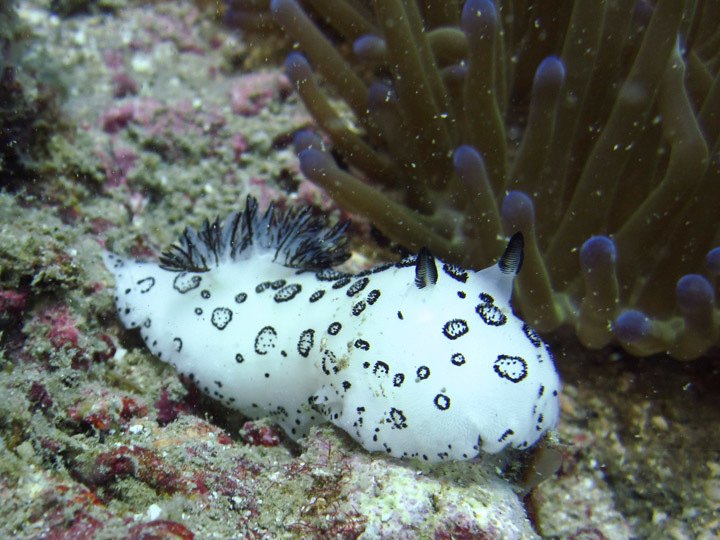 Sail Rock is a deep dive site, so colors can get quite distorted. You can color correct with Photoshop and other editing programs, but what I really needed for these photos was a strobe (an underwater camera flash) to bring back in the color. 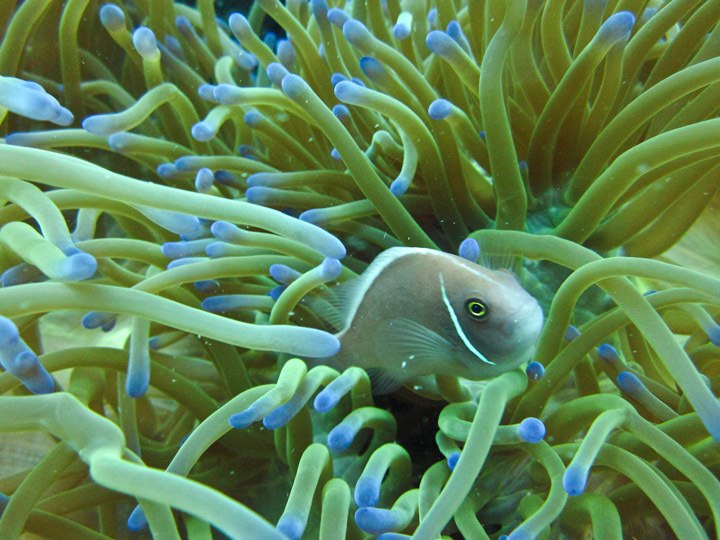 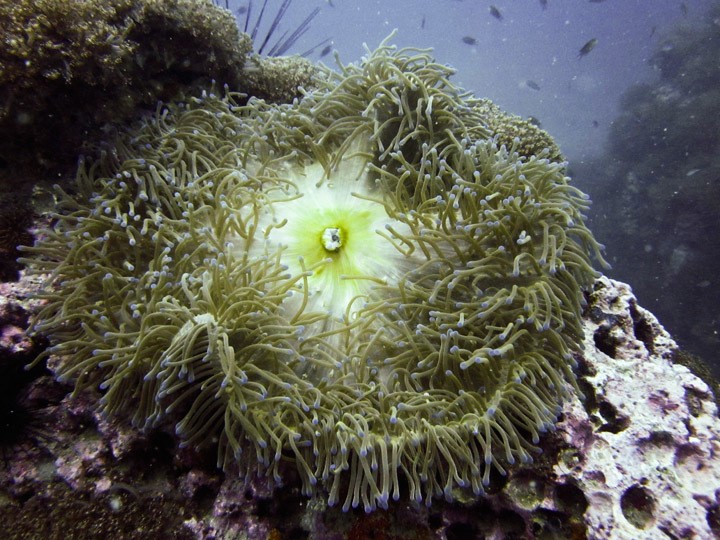 For a while Mark and I switched off still camera and video camera and Mark had his first go at underwater videography. I think being behind a camera is such a thrill, it’s even fun watching someone else discover it for the first time. 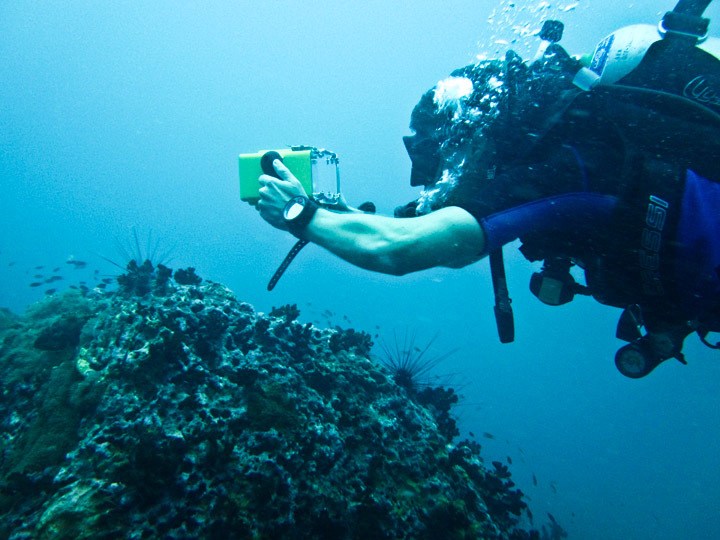 The best part of diving for me (and I think most people) is finding the marine life. Especially when you can find things that look like a character out of the movie Avatar. While I don’t logically believe in aliens (though “Underwater UFO” is one of my top incoming Google search terms), I don’t really see how there can be any other explanation for the existence of the nudibranch species. 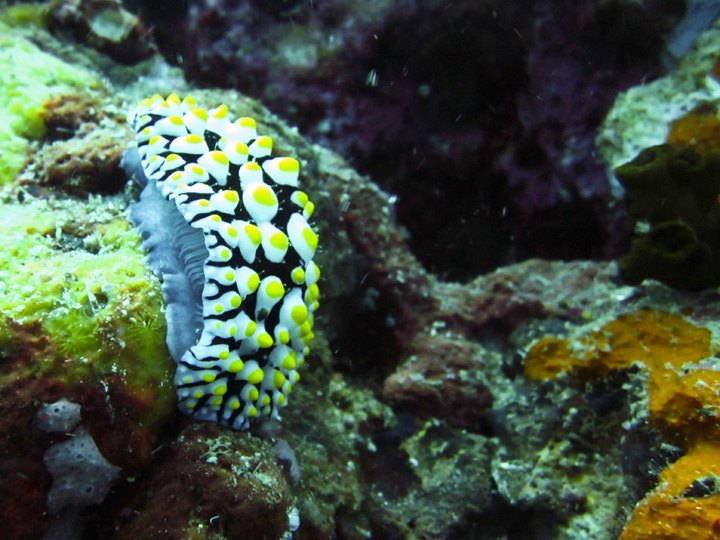 Most surfaces underwater are rough and textured, so this slick shiny shell caught my eye immediately. I love its dramatic placement in the jaws of a clam. 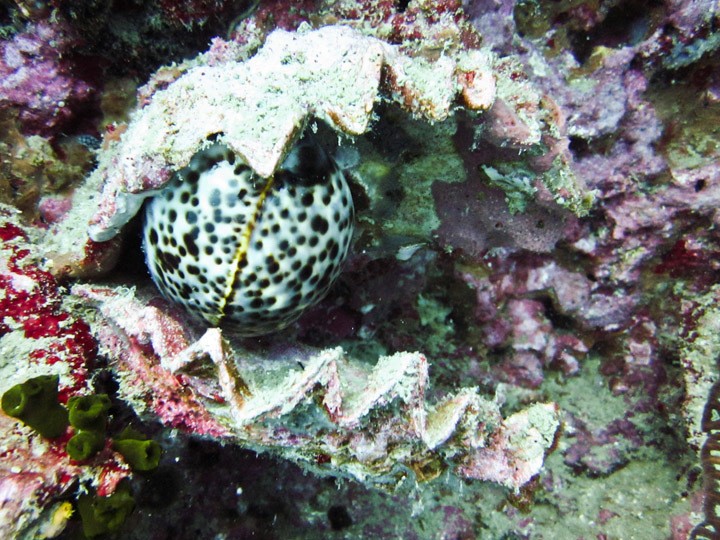 The anemones on the left were such a sight. The current kept them whipping around like spaghetti. You can get an even better idea in the video below. The photo on the right features just a basic Pin Cushion Sea star, but I love the variety in color and composition. 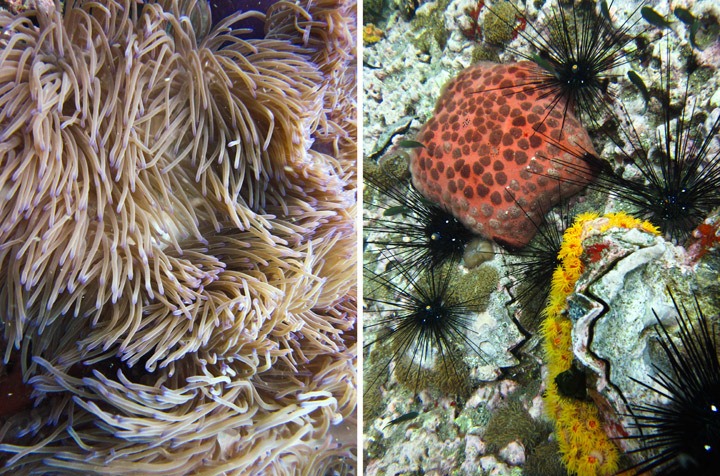 Can you spot the crab in this photo? One shell wasn’t enough for him so he’s taken shelter in an even larger one. 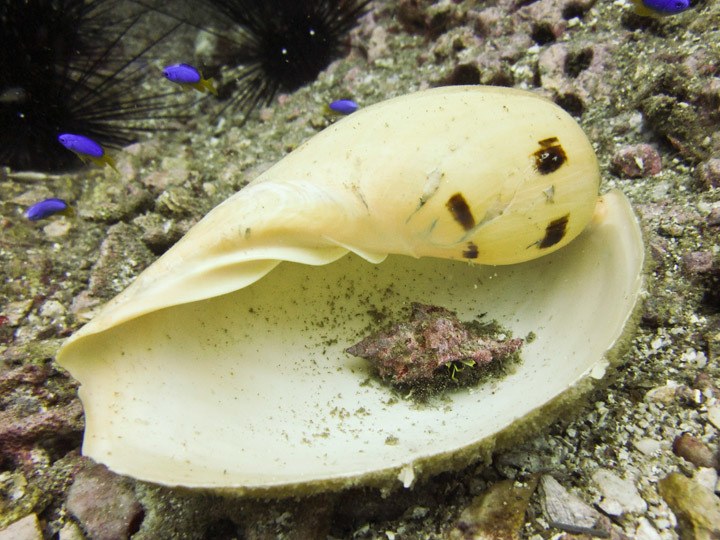 Are you sick of looking at fish yet? As I mentioned, we were also shooting video. 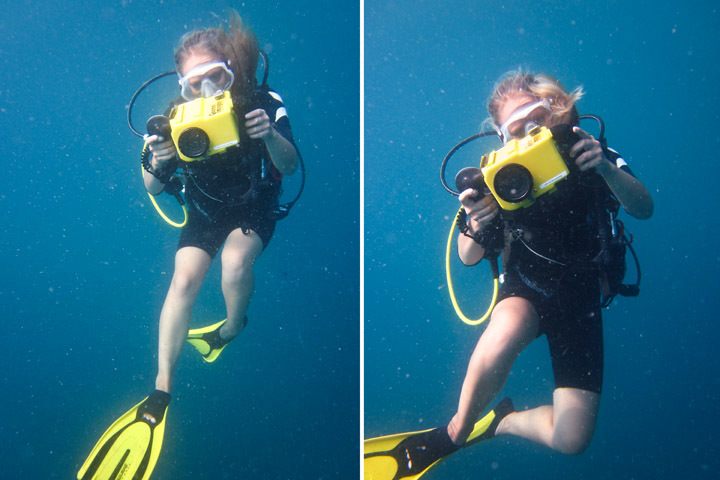 I tried hard to narrow it down as I know the attention span of most internet users is up long before six minutes. But there was so much great footage, this was the best I could do. It’s worth a watch!

A trip to Sail Rock should be on the must-dive list for any scuba enthusiast heading through the Gulf of Thailand. Trips run daily from Koh Samui and Koh Pha Ngan, which don’t have many dive sites of their own, but it’s easy to visit from the dive mecca of Koh Tao as well. 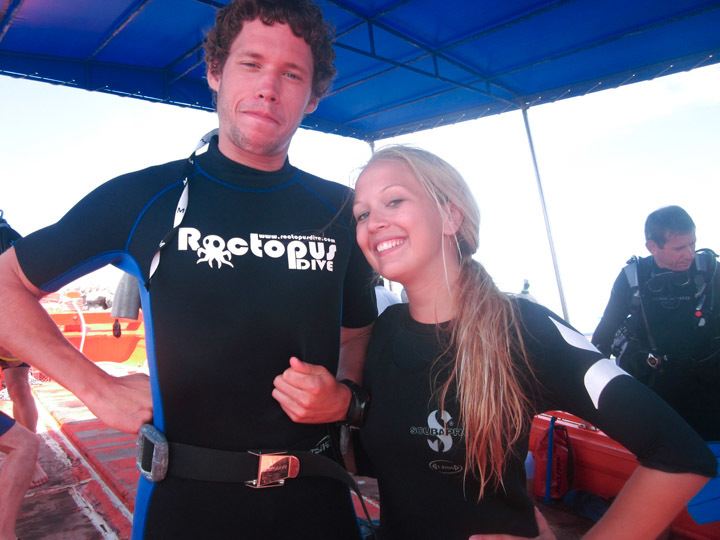 Contact Roctopus Dive in Koh Tao to get yourself out to Sail Rock. Standard trips are 3,000 baht and include two dives, equipment, a divemaster, and breakfast and lunch.

Yi Peng: A Festival of Light and Love