Thailand has these pesky little visa rules designed to make working illegally, or simply beach bumming indefinitely, much more difficult for foreigners. While I understand their motives, frankly, it’s not working (unless you are an immigration official reading this blog, in which case, I did all that flyering for love of handing out multi colored leaflets to tourists!). 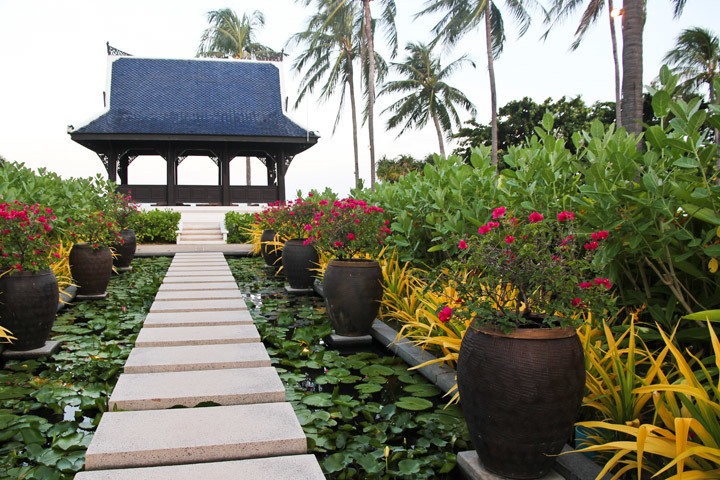 The slight annoyance at having to do a border run every time a two month tourist visa is up can be put off for another 60 days by extending the visa at a local immigration office, in our case, on Koh Samui. Despite all the time I’ve spent in Koh Tao, I had never before been to the neighboring islands, Koh Samui and Koh Pha Ngan. Koh Samui, the largest island, was the first of the archipelago to be discovered by tourists and thus is by far the most developed. It is now a haven for luxury travelers and families. Koh Pha Ngan on the other hand is known for its yoga retreats and laid back hippie vibe punctuated by a monthly Full Moon Party frenzy. So Mark and I planned a two night trip to Koh Samui after which I would hop to Koh Pha Ngan for a two night girl’s getaway with my friend Kat. When recounting this plan to friends on Koh Tao they were visibly disgusted by the idea of spending time on Koh Samui, the island that backpackers love to hate, but conceded Koh Pha Ngan would be nice. I make a hobby out of loving places that other people find repulsive, so I was determined to find something to love about Samui, an island so different from the one I chose to live on.

Our plans for the big island were pretty simple: go to immigration, see some pretty temples and a waterfall (two things sorely lacking on Koh Tao), and go to Tesco Lotus. 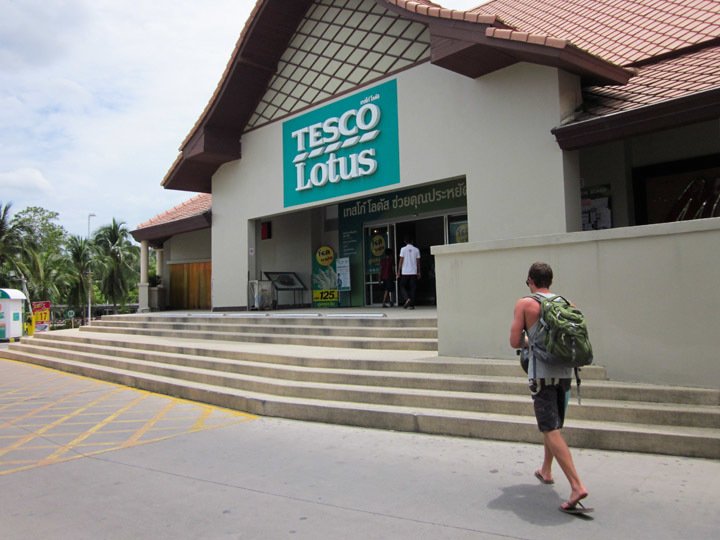 For my non European readers, Tesco is like the Wal-Mart of the UK. If you can’t imagine why two small island loving backpackers would be so excited about visiting a major chain store, consider the fact that our best selection of groceries and toiletries comes from a 7-11 and, horror of horrors, they do not sell Goldfish Crackers there. So we spent hours roaming the the aisles, freaking out over imported snacks and drooling over the selection of shampoos (maybe that was just me?). My indulgence was three bags of aforementioned cheese crackers while Mark went wild and bought an electric razor. This was already shaping up to be the Best Holiday Ever. Koh Samui: +1 point 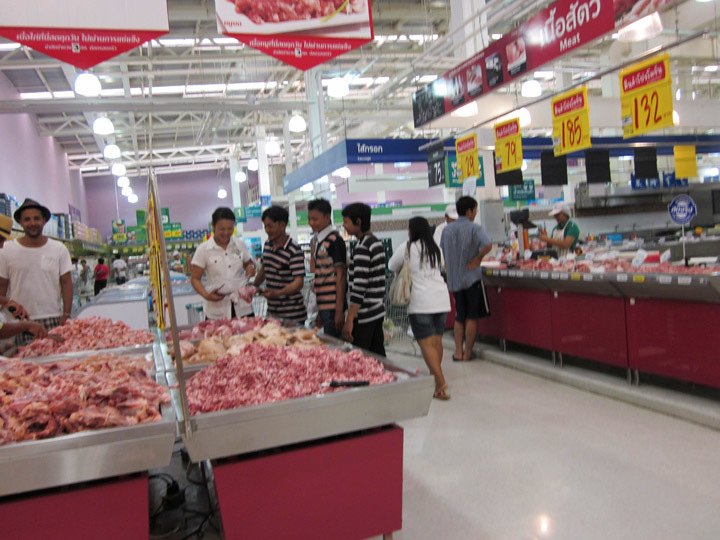 In the short time that it had taken us to rent a bike and get to Tesco, I had been smacked in the face with the differences between Koh Samui and our little Koh Tao. For starters, Samui has real four lane highways with actual cars! Despite my growing confidence with my bike I would never have been ready to tackle these crazy roads. Koh Samui: -1 point 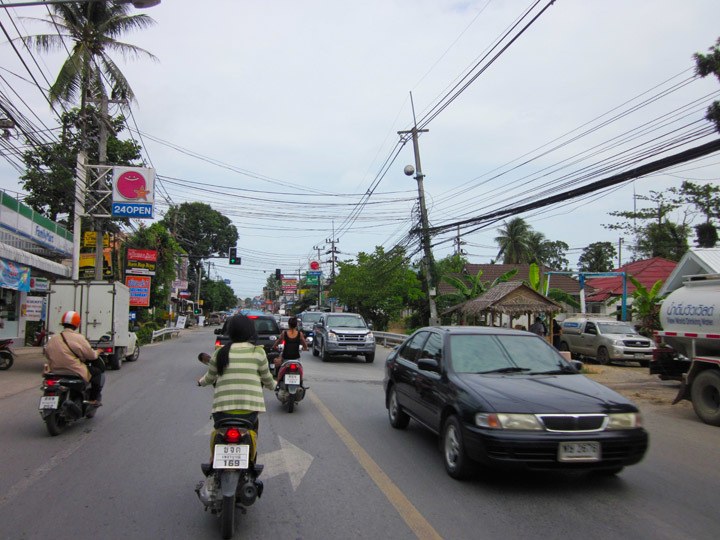 After finding an overpriced guesthouse room we cranked the air conditioning up to the max (we strictly ration our AC in Koh Tao as it’s crazy pricey), turned on BBC news and quickly went into a cheese induced coma. When we awoke to find real food, we were walked out to find Chaweng Beach, Samui’s busiest beach town, in full swing. I quickly realized we were going to have a problem. Being the ocean loving hippies that we are, we choose not to eat at restaurants that serve shark. (Read why). Being the dive haven that it is, no restaurant would dare serve shark in Koh Tao. In Samui we walked for over half an hour without finding a place that didn’t and I was about to  resign myself to a weekend of fast food when we came upon a lovely Italian restaurant curiously named Rice. Highly recommended. Still, I have to say for food price and selection and propensity for eating animals on the top of the food chain, Koh Samui shark eaters: -1 point 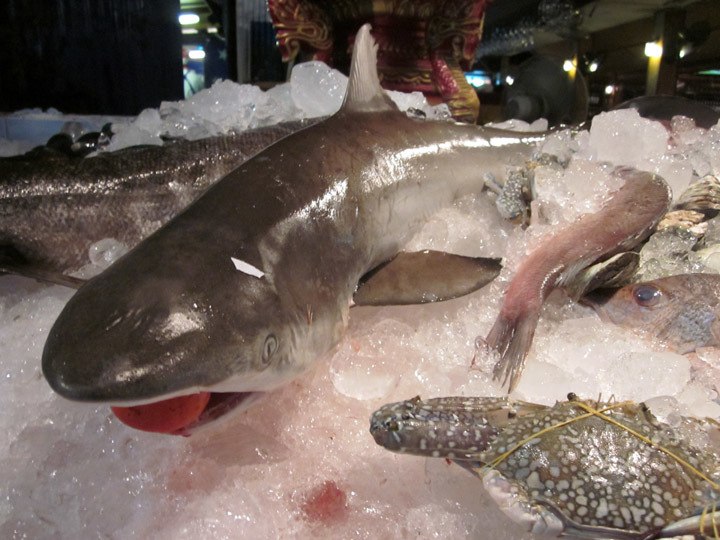 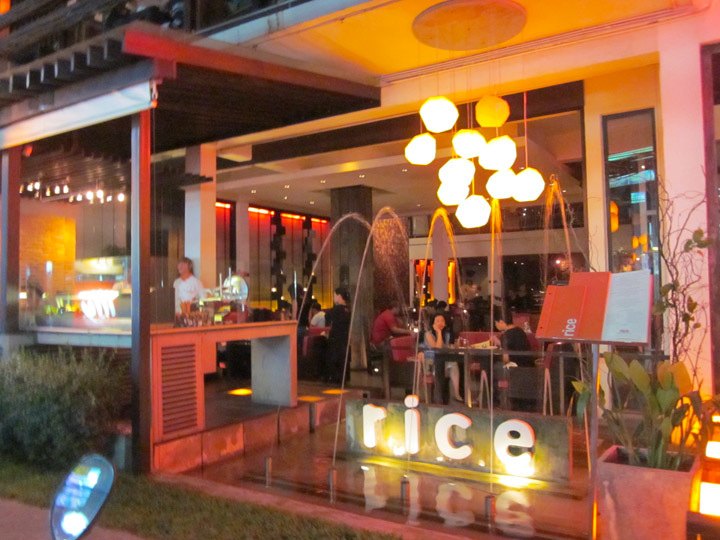 Day two we vowed to do something more productive than bask in air conditioning and western big box stores. We started out at immigration and extended our visas painlessly, having lunch at a restaurant with no English on the menu while we waited (something that I didn’t expect to find in Samui!) After, we consulted a map and chose a nearby waterfall to explore. We might think that trekking into the jungle to find a beautiful waterfall is a wonderful combination of adventure travel and enjoying the benefits of Mother Nature, but in Samui it’s big business. 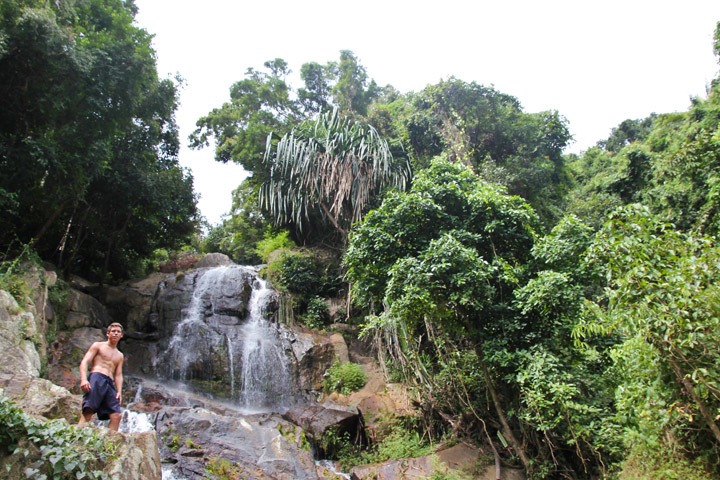 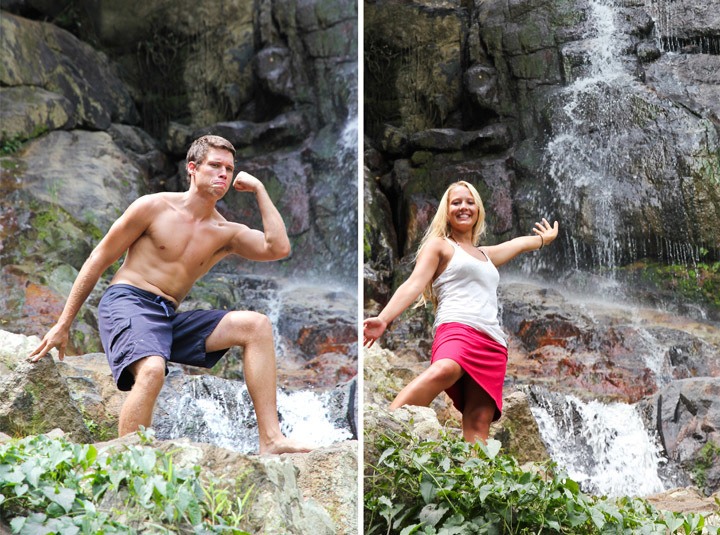 Before making it to the stunning Na Muang waterfall, we were stopped no less than three times by those trying to make a profit on a natural attraction. While we stood our ground and enjoyed the falls for free, it was a taste of the kind of sours too much tourism can bring. One wise businessman has built a road block and a parking lot en route to the falls, forcing you to walk or pay for a ride. The walk isn’t that bad. Yay for beautiful waterfalls! Koh Samui: +1 point 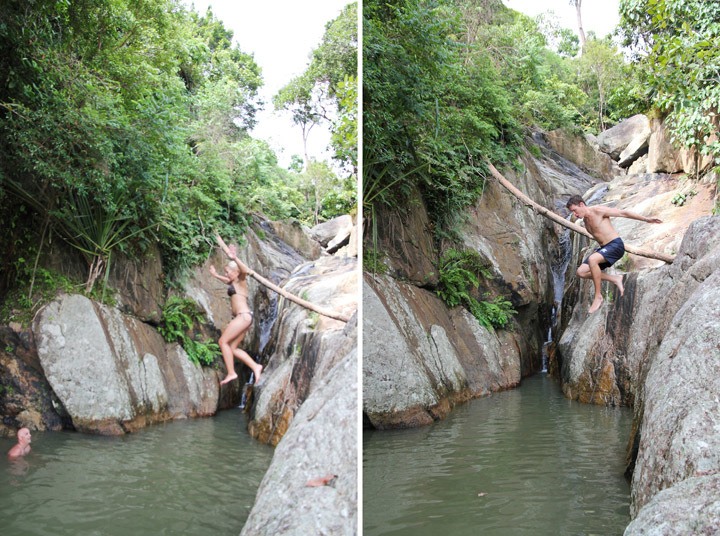 When we got back to Chaweng we finally walked out to the beach. It’s a beautiful stretch of fluffy sand and clear blue water, and I can see why tourism has developed so strongly on this island.  But there was something else about this beach that surprised me: there were Thai people on it. Koh Tao does not seem to appeal to Thai tourists, and thus it is rare to see anyone but Westerners on the beach, aside from a local kid splashing in the evening tide. But everywhere we looked there were Thai families sharing a picnic, groups of Thai boys playing volleyball, and people just generally enjoying their holiday. I really, really liked this side of Koh Samui. +1 point. 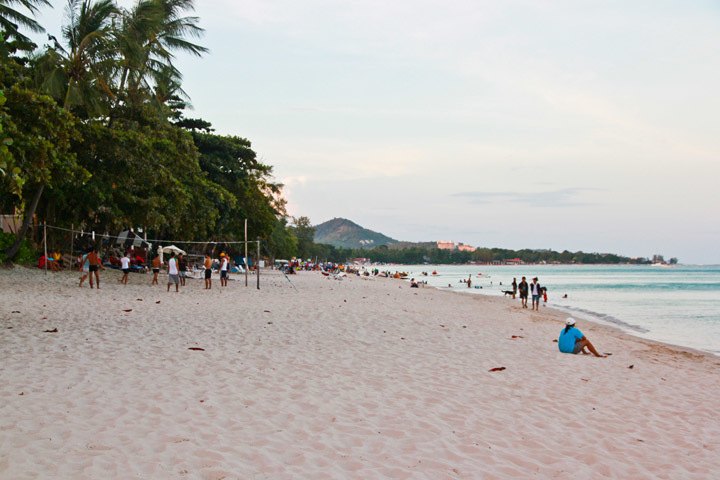 Later we were looking forward to experiencing  Samui after dark. Samui has conflicting reputations as both a seedy place with go-go bars and also a family friendly destination, so we were curious how that would translate to nightlife. Our plan was based around a billboard that had made me shriek with excitement: 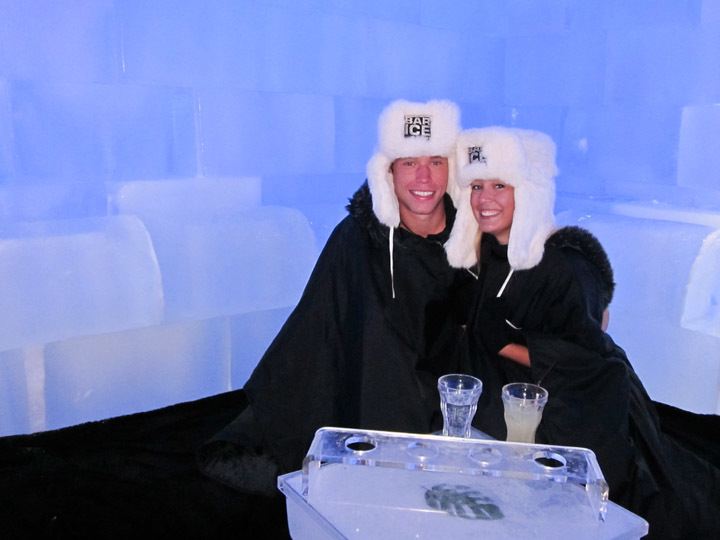 Thailand’s only ice bar. I entitle these photos “Stuff I Make My Boyfriend Do” because Mark was really only humoring me as giggled like a maniac, took way too many photos, and marveled at the fact that my hands were going numb on an island in Thailand. For 500 baht including two drinks it was a pretty affordable thrill. 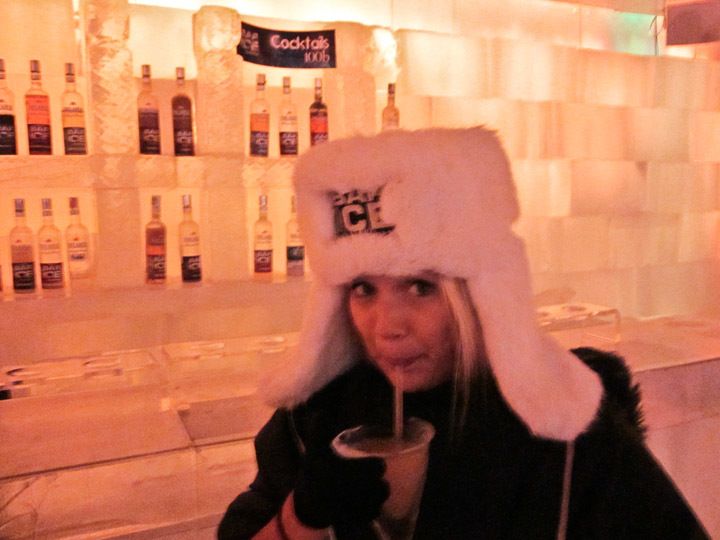 Next we made a beeline for Reggae Bar, a two story Bob Marley shrine with an 8 piece cover band dedicated to the bar’s namesake. It was an amazing venue and I think in high season this would be a great place to go out, but the night we were going out everywhere was pretty dead. Once again though, we saw just as many Thai tourists our as Western ones and that made me happy. Despite the lack of people, for variety and the something-different factor I’m going to give Koh Samui +1 for nightlife. 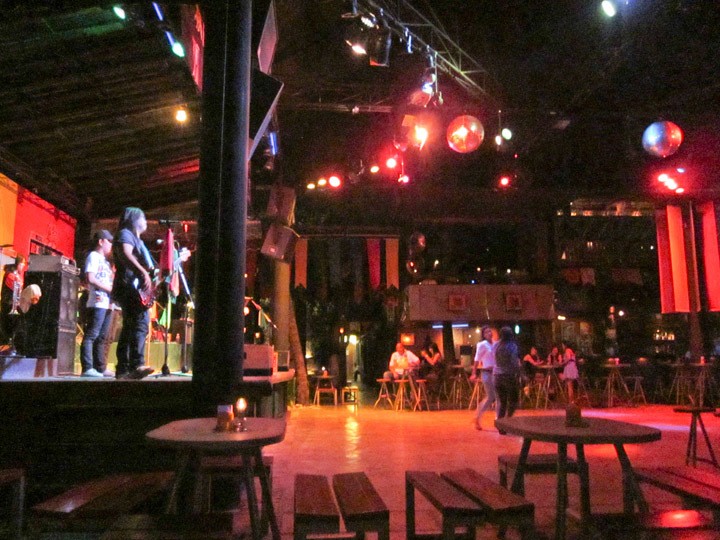 On the final morning of our weekend getaway, we head out to see Wat Phra Yai (commonly known as Big Buddha) and Wat Plai Laem. While Koh Tao has a wat or two, they aren’t the big tourist draws that these two are. Having done very little Thailand temple-hopping outside Bangkok, I was very impressed by these colorful and enormous compounds. It was a reminder that I want to do more reading on Buddhism during my time here in Thailand. Not as impressive were the tourists dressed in super skimpy shorts and Full Moon Party tank tops. Koh Samui: +1 for amazing temples (and minus one to the fools who don’t know how to dress for a temple) 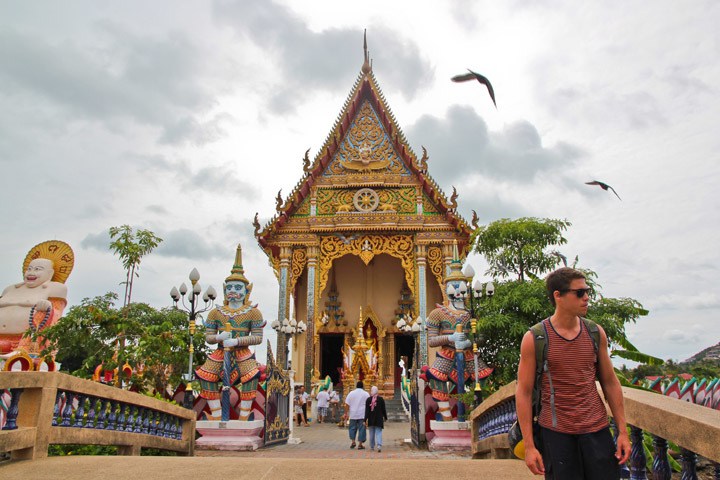 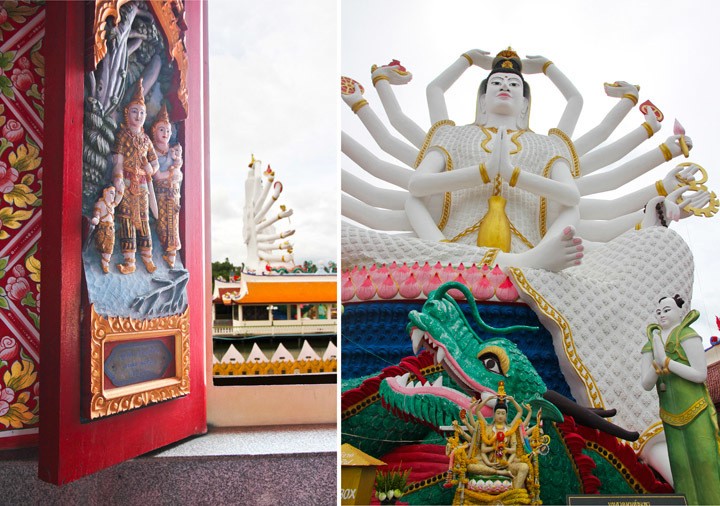 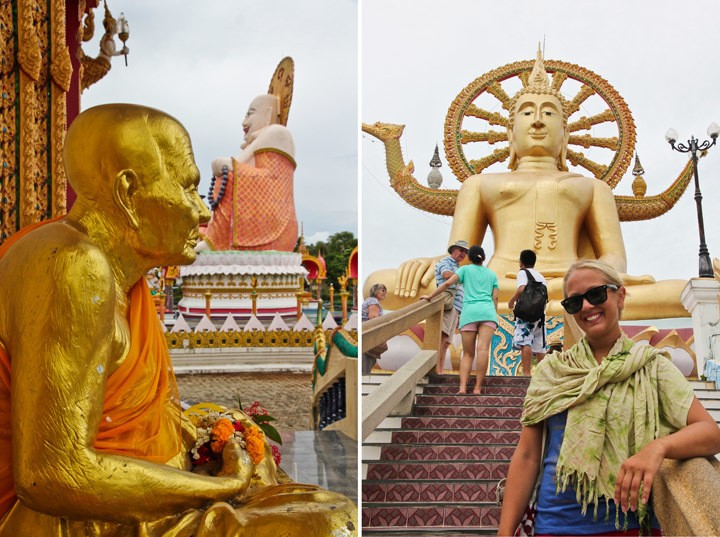 On our way out of Samui, we drove through Bophut, the boutique darling of Koh Samui, and within moments were smitten. We vowed for our next trip we would stay in this laid back beach town. Koh Samui: +1 for still having genuine charm. 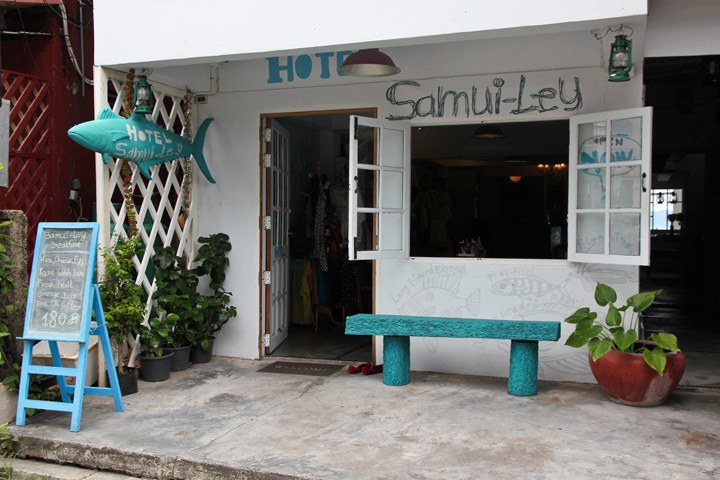 As you can see, I found many things to love about Koh Samui. However, it was nothing like I expected. I was picturing a glossy, glamorous island and while I’m sure that exists in pockets, Samui was just a big city/island hybrid with all the grime and crime of any urban area. I can see why most people on Koh Tao turn their noses up at it. But there were pleasant surprises too, like sharing the beach with Thais and seeing the beautifully untouched interior of the island.

The greatest pleasure of all was to getaway and experience something totally different from our daily lives on Koh Tao. When you go on vacation from a small, remote tropical island, you want to bask in air conditioning, eat fast food, and enjoy the conveniences of modern life that are not usually available to you. This weekend getaway was all about experiencing something different, and seeing yet another sliver of the many faces of Thailand.

To see all my photos from Koh Samui (and there are some good ones!) click here.

Fueling Up To Flow: Where To Eat in Koh Phangan