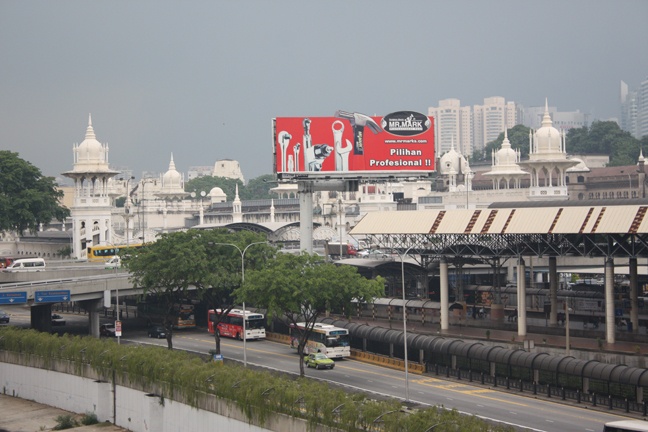 Our main objective for our first full day in Malaysia was to get to the Thai embassy so Mark could apply for his visa. Again too cheap to pay for a cab, we took the Skytrain as close as we could get and then walked the rest of the way to the embassy where we waited in lines and held our breath and found out we could pick up the visa the very next day! This was great news as we were antsy already to get out of the city. We then tried to visit the nearby Petronas Towers but were told it was closed on Mondays, so we vowed to see them the next morning and headed to the Lake Gardens Park.

“Just a few hundred metres from busy Chinatown, the urban landscape gives way to sculpted parks and dense tropical jungle. Covering 92 hectares, the Lake Gardens were created during the colonial era as an urban retreat where the British administrators could escape the hurly burly of downtown.” Via Lonely Planet

There are many different attractions within the Lake Gardens, and we started out at the Butterfly Park. It was very impressively landscaped and also featured long necked turtles and other reptiles. We had a great time and learned a lot about the creepy crawlies to come as we ventured into the country. I had one moment of unsettlement when I looked around us and realized I was the only woman I could see not wearing a full veil. Even more odd, every man that accompanied them looked like they were coming out of a mall in New Jersey wearing Ed Hardy baseball caps. It was definitely an out of body experience and we received as many stares as we gave out. 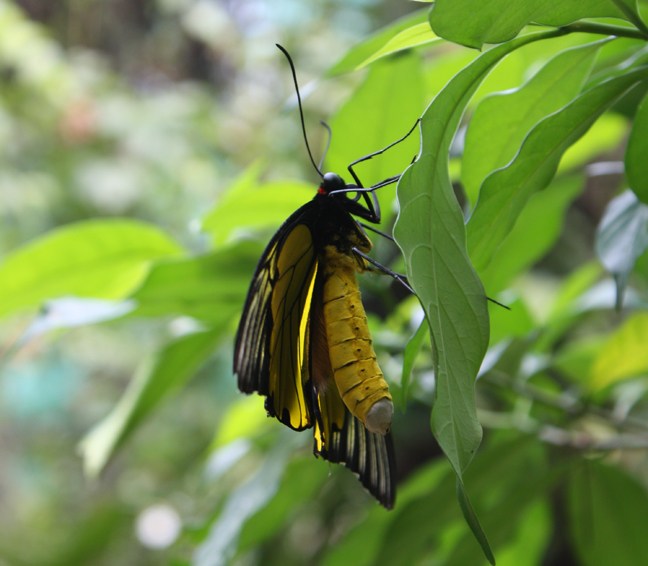 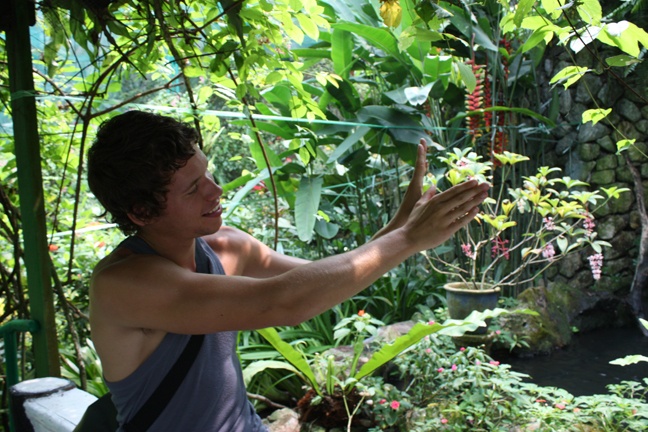 Just as we were leaving the gardens I lined up a photograph and didn’t hear a click- my camera was dead! I was devastated. I couldn’t believe I had forgotten to charge the battery. We left the Butterfly Garden and walked around the massive grounds a bit more, passing beautiful mosques and gardens before arriving at the star attraction, the KL Bird Park. However after seeing the price and factoring in my dead camera we gave it a miss- maybe next time!

After consulting a map we located what looked to be some sort of food place and headed in that direction. I don’t know what I was expecting, maybe something on par with the Bronx Zoo cafeteria? Well when we arrived we found a cement hut with picnic tables around it. I was skeptical but we were starving so we gave it a go. No menus, no signs, someone just handed us a plate and with much confusion we pointed to the buckets of what we wanted. Somehow Mark ended up out the back of the building having his plate loaded up with fish fresh out of a fire pit as well. When we got to the picnic tables we slowly looked around and noticed something- everyone was eating with their hands! We laughed, shrugged, and went for it. One of the servers watched us with amusement for a few minutes before finally giving us some forks and bowls of water to rinse our hands in, but we were quite proud of ourselves for giving it a go.

Back in Chinatown and with a refreshed battery I walked around exploring the neighborhood we were staying in. I loved the fresh flowers everywhere and the slightly decaying look of the buildings. Definitely a strong contrast to sleek and modern downtown. 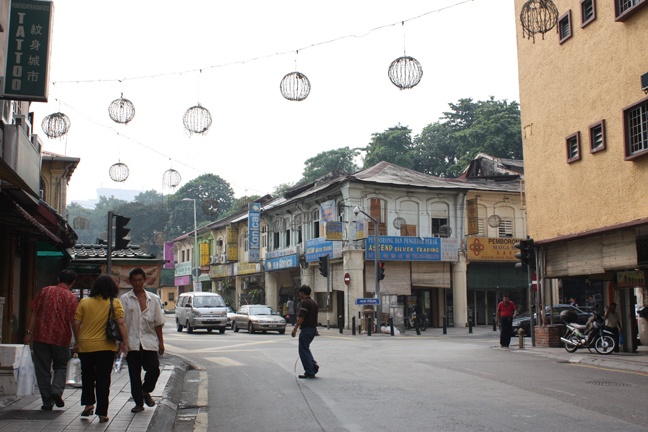 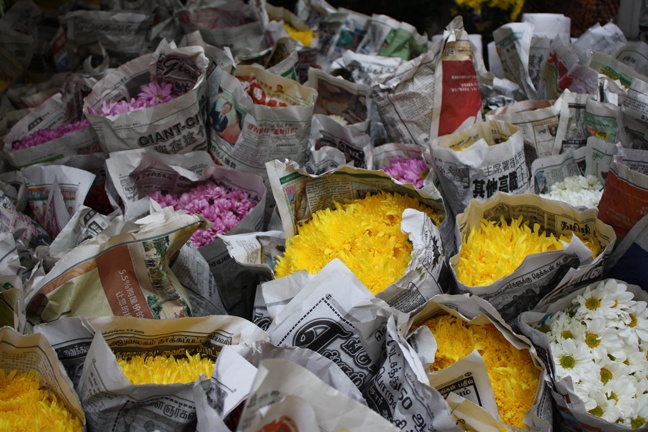 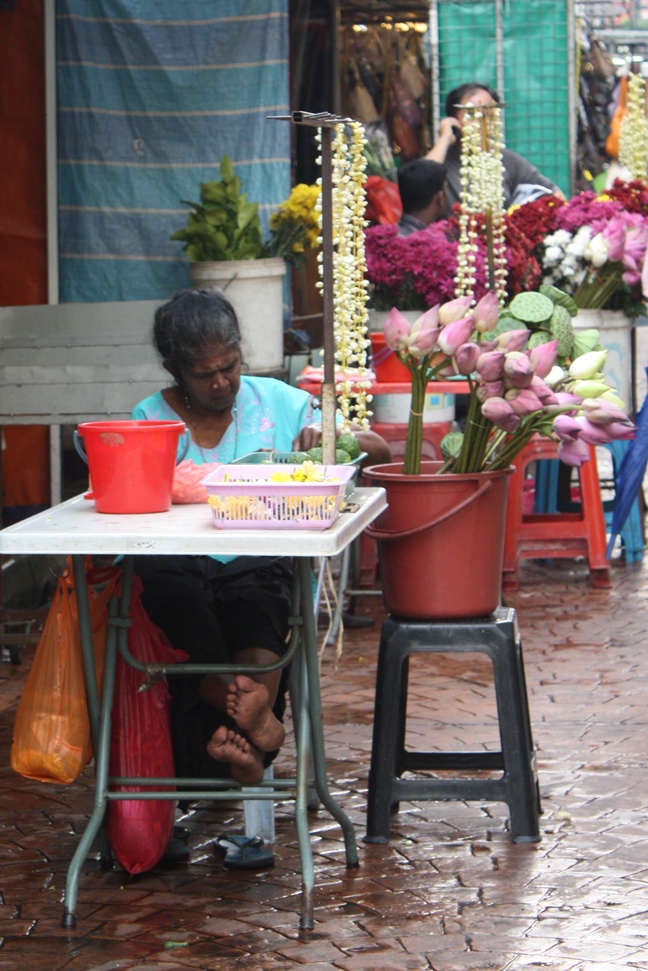 By the way. Ever wondered what an asian squat toilet looks like? You’re welcome. 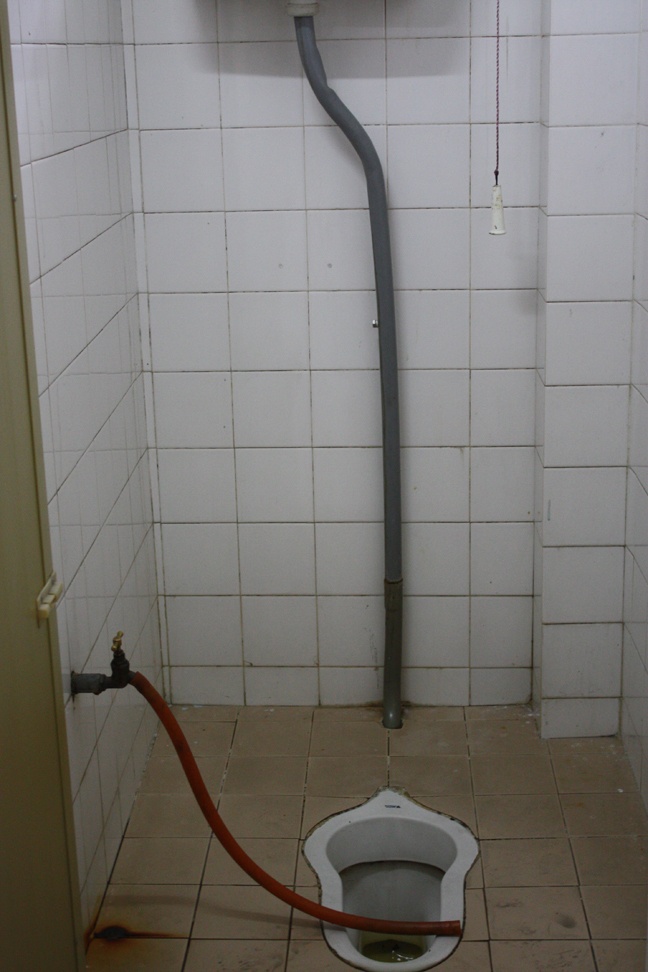 Our next and last day in Kuala Lumpur was planned with military-like precision. We had a very small window in which we could get tickets to the Petronas Towers, followed by a few free hours and then another small window in which to pick up Mark’s visa and catch a bus to the Cameron Highlands. 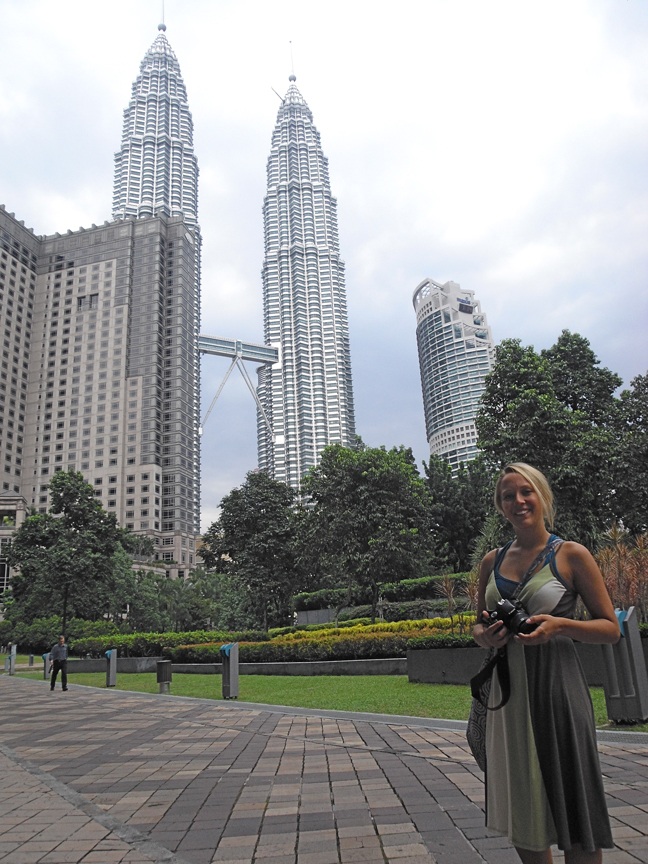 Who needs to go in when you can stand in front?

Once again we woke up at an ungodly hour and braved public transit to the towers, where we rushed up to the visitor’s desk to find out tickets were sold out for the day! Most of them had been presold to school groups and the rest were in even higher demand due to the holiday the day before.

So we accepted it wasn’t in the cards for us and headed across the courtyard to the Aquaria KLCC, Kuala Lumpur’s impressive aquarium. If you are aquarium people, and we certainly are, this one will not disappoint. There is an underwater tunnel, interactive touch tanks and tons of exotic fish we hoped to spot in the wild once we reached the islands! The best part was a show at the large animal tank at the end where divers went down to feed the animal and had Mark drooling with jealousy and declaring it his dream job. 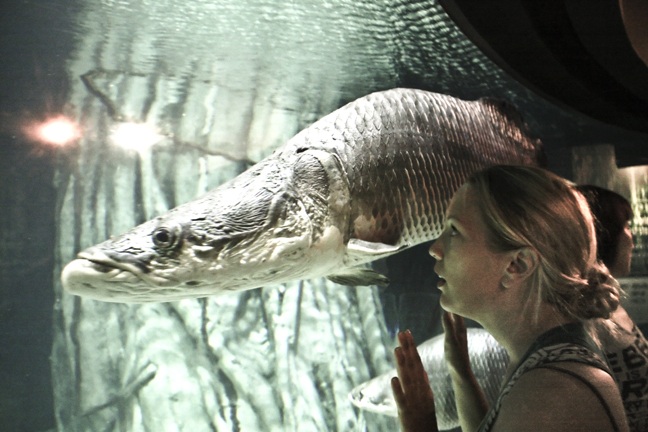 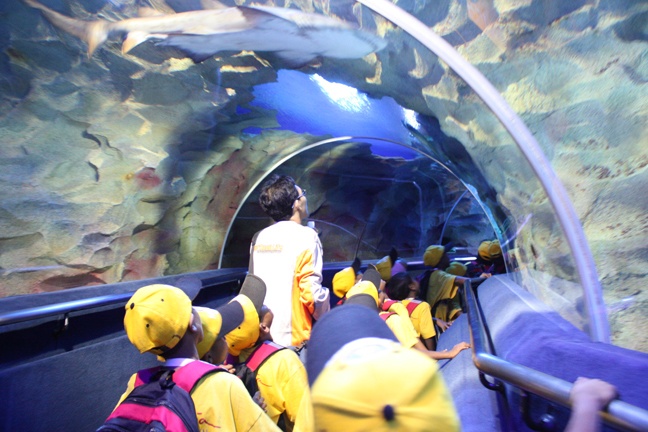 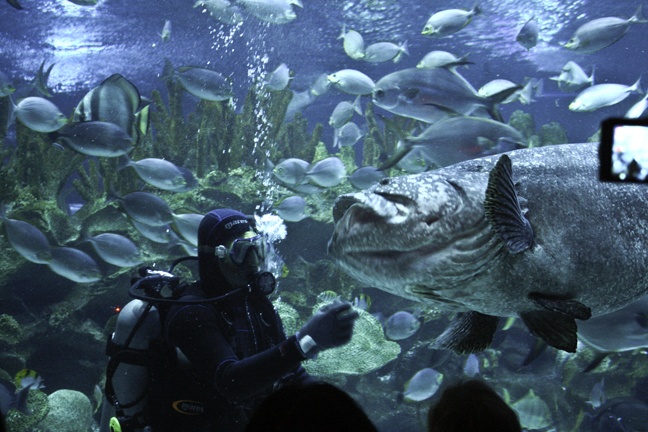 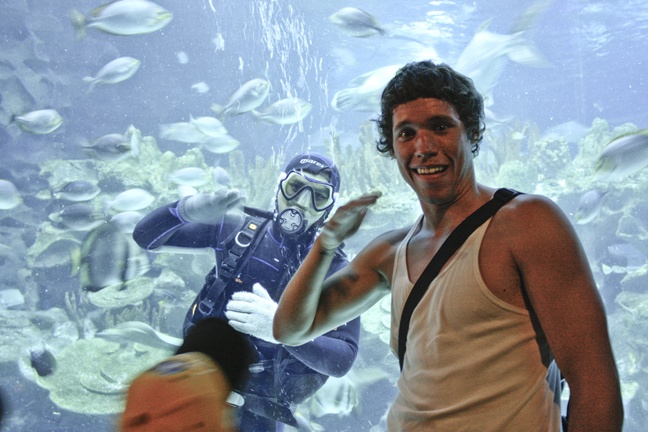 After getting our underwater fix we still had time to kill so we headed into the mall that sits in the base of the Petronas Towers. All I could think was the damage my kid sister could do in that place. It was unlike any mall I’ve ever seen before, all high end luxury stores and gleaming food courts without a Cinnabon in sight. The main patrons seemed to be women in full burkas, which explained the window displays of mainly shoes and purses.

Suddenly it was Go Time and we walked as fast as the heat would allow to the embassy, praying for short enough lines to allow us to catch our bus to the Cameron Highlands, as we had truly had enough of the urban heat. It took a bit longer than anticipated so we were forced to break our cheap streak and take a cab, but boy was it worth it since we happened to land the Craziest Cabbie of all Times.

If only we had thought to start recording earlier you would have been treated to even better gems, but this at least gives you an idea of the madness that we were assaulted with for our twenty-minute cab ride. With moments to spare we made it to the “bus stop,” really just a side alley, and with harrowing memories of the bathroomless buses in Cambodia I darted into a nearby restaurant to use the bathroom, leaving Mark once again stressed to the maximum convincing a bus driver not to leave while his girlfriend was looking around for somewhere squat and pee. But as usual things went our way at the last minute and soon we were on the road again, headed happily to cooler climate. 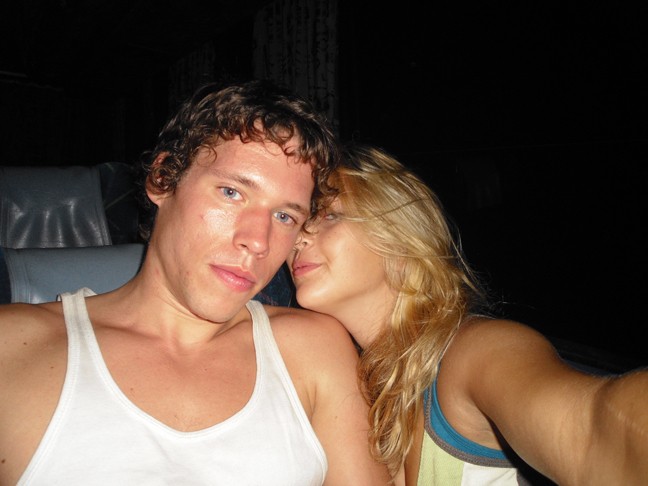 Another day, another bus

Exploring Kuala Lumpur: Menara and McDonald’s The Cameron Highlands: In Search of the Raffleasia
0 Comments...