The Perhentian Islands: Kayaking In Search of The Beach

So… remember when I went to Malaysia? Nearly two years ago? Yeah that was fun. So fun that I totally abandoned all illusion of blogging and just… traveled. It was great at the time, but I now regret it as I find myself grasping at those memories as they fade slowly from my frazzled mind. So I’m tacking that “upload” folder on my desktop and recording what few memories I do have of our time in the Perhentian Islands. Disclaimer: In the two years that have passed this has emerged as one of the most idyllic, beautiful and happy places I have had the fortune of visiting. Expect gushing ahead. 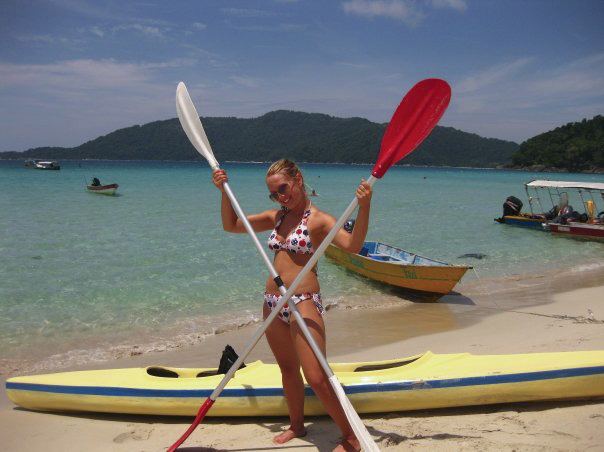 Blame travel fatigue, blame the lack of sterile plumbing, but Mark and I both felt a bit ill when we arrived on Perhentian Kecil. Additionally, we were both suffering from a little eye infection [Note: ah, the clarity that time brings. That “little” eye infection amounted to massive corneal and eyelid damage and later surgery, which I am currently recovering from.]

Since even the sun was causing extreme eye discomfort, we decided the pressure of diving would be too much and rented a little yellow kayak from a man on the beach instead. In a moment of comic confusion we dragged the wrong little yellow kayak into the sea and the two respective owners got worked up for a moment before shrugging and splitting our $4 rental fee. Island life and cutthroat business practices do not a perfect match make. 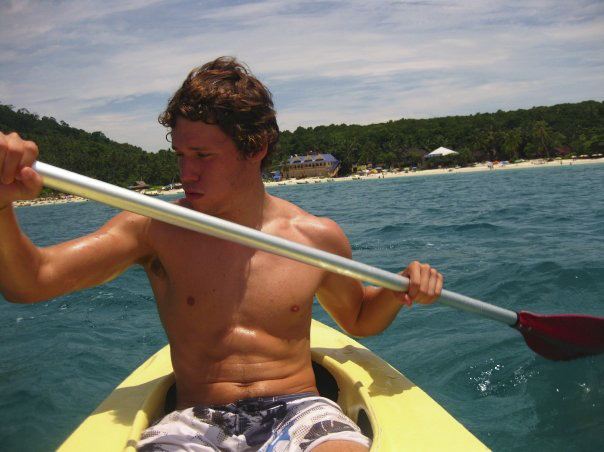 Mark paddled while I got down to the important business of documenting our adventure and navigating. Of course our map was a tad basic, and, lacking any space perception skills or understanding of tides and currents, I reckoned we could circumnavigate the island in no time! 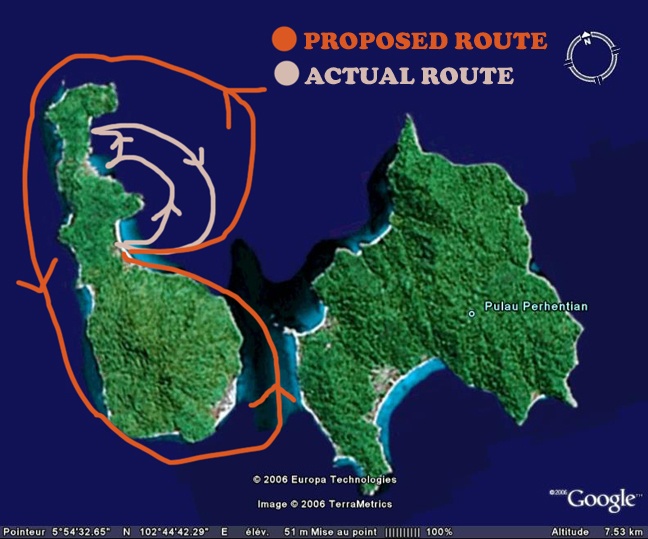 Perhaps an hour later (so that’s what a current is) we came across an abandoned spit of sand shouldered by rocky outcrops. Pulling the kayak in, I actually felt a chill run down my spine. A lush island background, water as clear as glass and not another human being in sight. We were sweating and breathless from paddling and the only things I could hear other than our panting was the sound of the slight breaking waves. 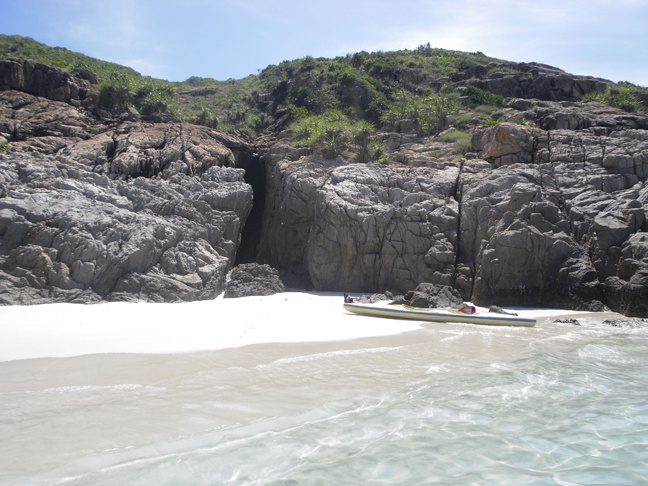 You know that scene in the movie The Beach when Moby starts signing and Leonardo DiCaprio is somersaulting down the beach with joy? That’s kind of what it felt like. See the photo below? You can see Mark in that picture. He’s underwater. That’s how clear it was. 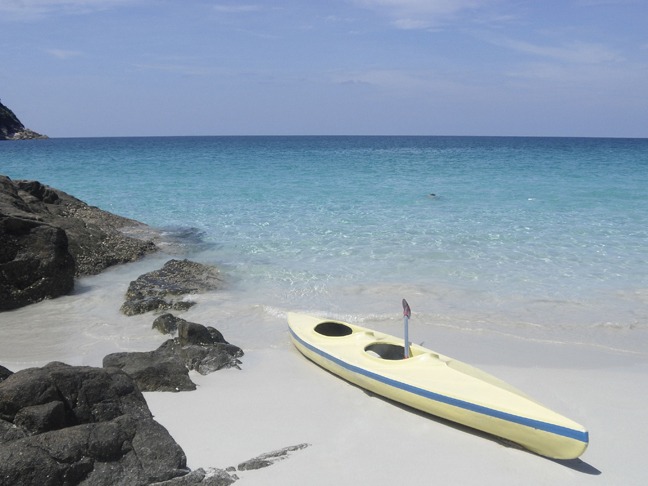 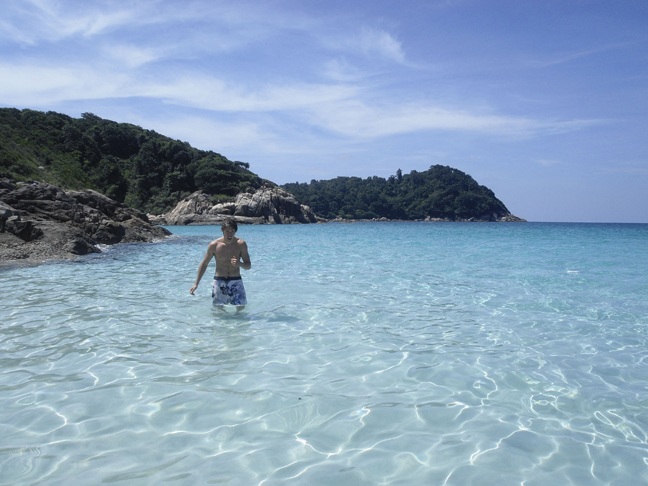 We floated in the water, played in the sand, and did all the other self indulgent things one does on a carefree beach day. Only there was no loud music playing, no volleyballs bouncing overhead, and no one getting in the way of the sun with a beach umbrella. We did eventually find one downside to being the only ones on the beach: no one to hand the camera over to. Self portraits: always a bit awkward. 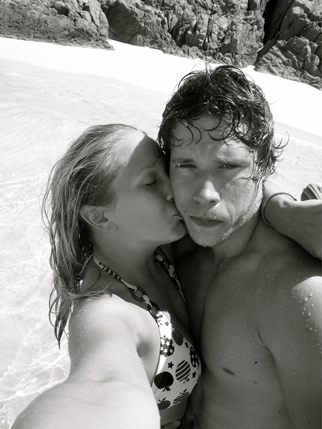 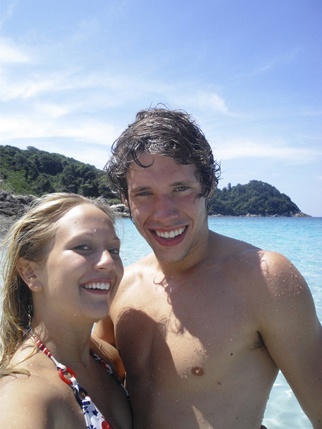 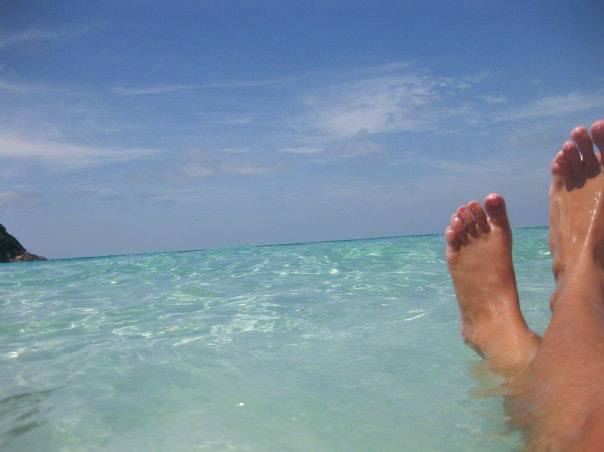 I think we might have never left if not for the snorkeling couple that approached and told us about the resort just one beach north that they were staying at- the furthest out on the island. We decided to check it out, both to grab a snack and to give these two a go at playing Celebrity On a Private Island. 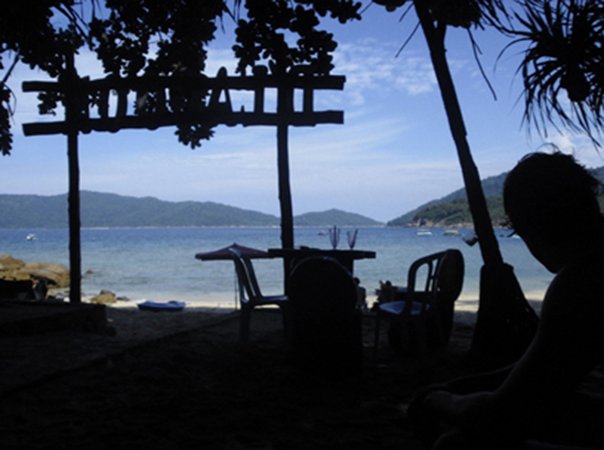 The resort, D’Lagoon was basic and remote and gave us the perfect place to refuel before our paddle back to return our chariot of the day’s adventures. But first, nothing tops off a day of bicep plasting paddling like a little high ropes climbing! I sat this one out to document, naturally, but Mark went all out. Clearly, this was back in the early days when we were trying to impress each other (like that crazy pants scuba thing I tried). 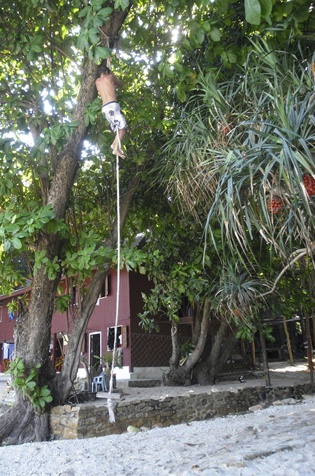 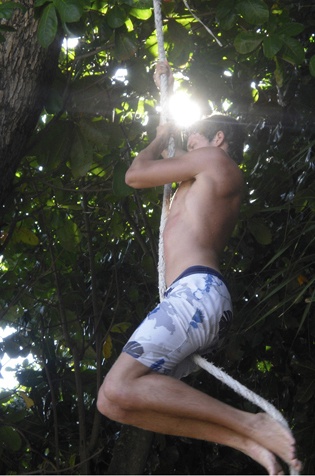 Those were the days. Now we just sit around and lazily plan moves to other countries! Oh, to be kayaking in the Perhentian Islands again.