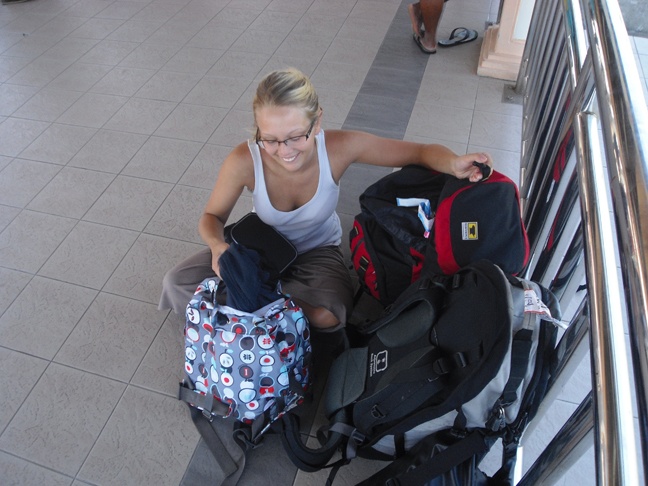 the heavy bags that would come to haunt us

It was a complicated journey. There are no regular buses that run the Cameron Highlands-Perhentian Islands route. So instead we take a van with a few other tourists to the Kuala Besut jetty where we were issued tickets for the speedboat and had to write our names and passport numbers in a large book. Mark didn’t want to rummage through his enormous backpack for his so he told me to make it up. I hesitated but scribbled something random down, a decision that would come back to bite us. As we went to pay a man mumbled something to his wife about visiting an atm on the island. With alarm, one of the ticket workers told his there was no atm, not on either island, or the town we were in, for that matter. After much cursing and disbelief the couple finally left in a taxi to go to the next town over, missing the boat and delaying their trip a day. I smirked at Mark. I had warned him to go to the atm earlier for this very reason. My guidebook addiction was paying off! 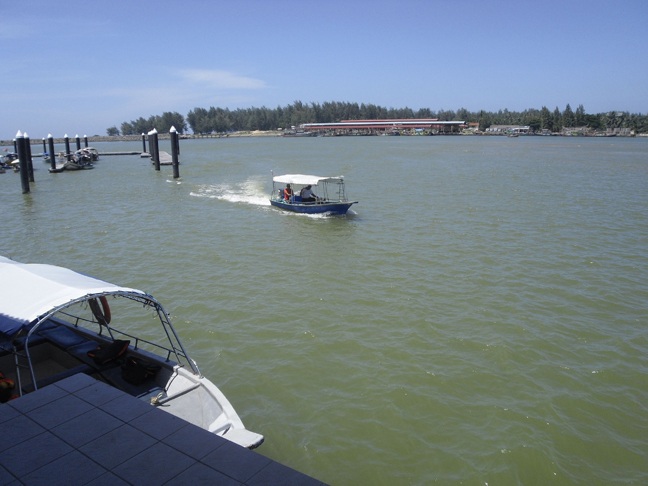 We approached the pier picturing the huge ferries that shuttled us to and from our island in Thailand, only to be met by a speedboat with a two person crew handing out life jackets. We were grateful for Mark’s dry bag as people transferred things into plastic bags, anticipating a wet ride. As we were pulling away from the dock, one of the crew walked around collecting half of our paper tickets. As he took mine, the other half flew from my hand into the water. Oh well, I thought. Wrong! They started turning the boat around! For a piece of paper! My face turned red while they tried to catch it with a net but it just floated away. Then the tried to take my other half of the ticket. But I need that to get back, I argued. It’s a round trip fare. They basically grabbed it from my hands and told me to sit down and deal. It was not a cheap fare and the thought of spending another 70 RM to come back did not sit well, but I tried to remember that those ticket stubs were probably how they got paid, and it was likely worth a lot more to them than it was to me. 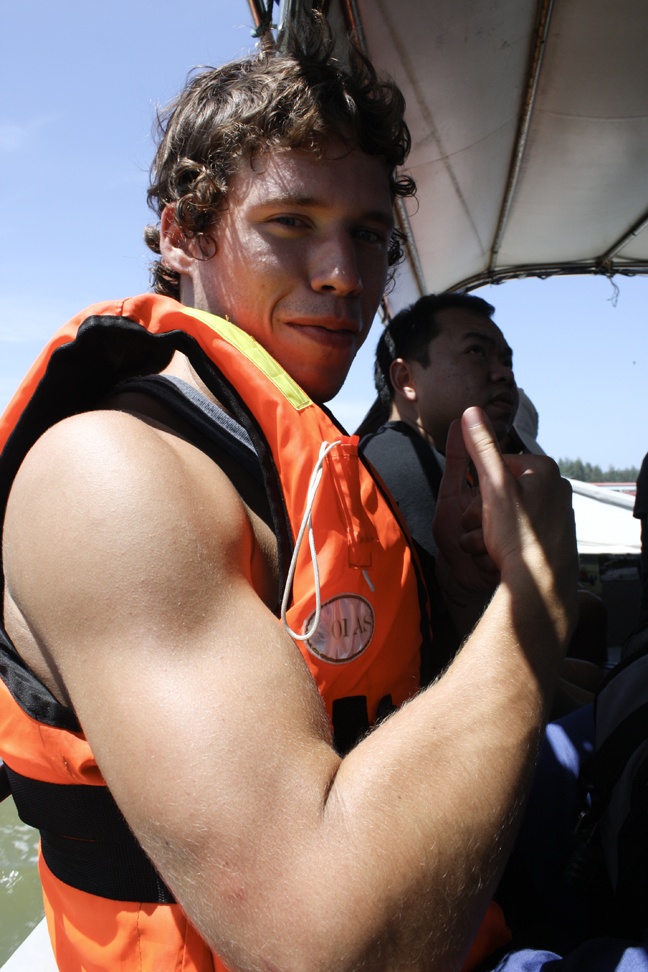 Its never a good sign when lifejackets are required

As we pulled up to the island all thoughts of paper and tickets and anything other than silky white sand evaporated from my mind. We just looked at each other and laughed- that’s how beautiful it was. Once we were on the island, instead of rushing to a guesthouse we put down our packs and adjusted back to island life with a long and leisurely lunch. After lunch we moseyed to the next door dive shop. The laid back divemasters looked alarmed when one asked where we were staying and we said we didn’t know yet. They exchanged glances and one went to check the adjoining bungalows, but came back empty-handed. “You better sort out your accommodations,” he said, “Now.”

Still not really realizing the gravity of the situation, we walked the rest of the way down the beach, hearing no after no. Then we went back to where we started and walked the remaining length. No vacancies. Okay, so this had been our first choice beach as the quieter side, but the other beach would be just fine. We walked the ten minutes down an overgrown footpath to the other side of the island, where the other beach was. The sun was still beating strongly and our bags, oh my, the bags, did I mention we were still carrying our thirty pound backpacks on our backs?

We started right down at the southernmost bungalow, barely bothering to walk all the way to the up to them, just shouting “Vacancy?” and walking on like some kind of drive by bungalow search. Halfway back up the beach, a dive shop took mercy on us and gave us water and told us to put our packs down while we searched. It was going on hours now. Mark went on for a while I sat around sweating and strategizing worst case scenarios. The divemaster told me the next boat left at 8am the next morning, so we could probably find a room then. But for the next 14 hours, we were stuck on the rock. Mark came back with a development. There was a room available! Too bad it was at the ONE RESORT on the island that was above our budget and would cost for one night what we had budgeted for accommodations for the whole trip. I weighed the options, which appeared to be using the emergency credit card and begging my parents for forgiveness later, sleeping on the beach with absolutely no camping equipment whatsoever, or finding someone who we came in on the boat with and begging them to sleep on their floor. Why had we not booked ahead? It was high season in a place with limited transportation to and from and limited accommodation! Damn this fly by the seat of your pants style of travel! I longed to go back in time and spend twenty minutes on HostelBookers.com 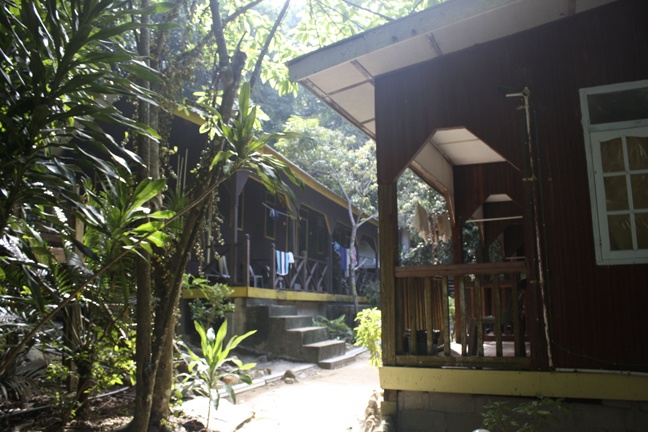 “Did you check the Moonlight Chalet? The last one past the expensive resort?” In Mark’s excitement to report back he had missed it. We couldn’t bear the thought of one more rejection but trudged ahead anyway. What a surprise, they were full. No, wait, said one of the staff. There’s that one room, the one the couple refused to stay in. “WE’LL TAKE IT” we spat, practically throwing our ringgits across the counter at them. We sprinted to it, eager to throw down our bags and claim our space against any other wayward backpackers that might still be wandering the beach. 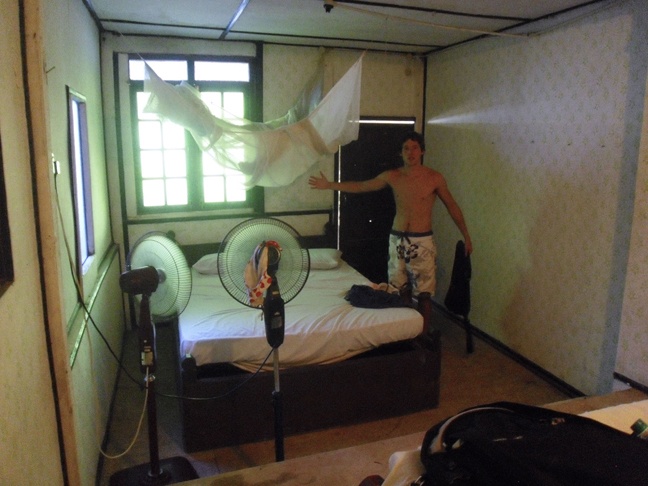 Um, yeah… the room no one wanted…

Once inside the room, which to be fair was maybe only half a step above sleeping on the beach, we cheered and went out to the balcony. Thoughts of being eaten alive by sand gnats, our belongings being washed away in a storm, and being maimed by beach bandits as we slept melted away and I looked out at the most clear water, soft beach and beautiful island I had ever seen. The journey was worth it. 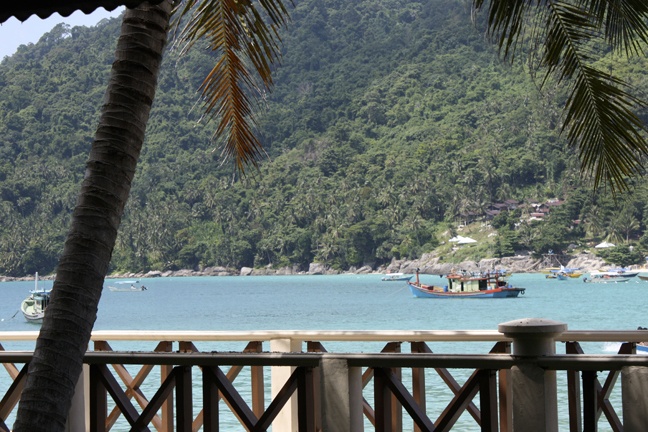