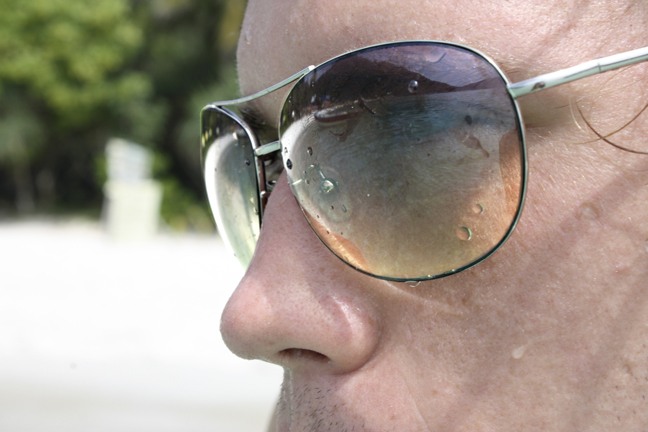 Not only is Kecil small, it is also isolated. I remember arriving in Koh Tao and thinking it was the final frontier of humanity, and that island has a chain of 7-11’s and a paved road revving with motorbikes! How my perspective changed throughout the trip when I arrived on an island with no roads, no motorbikes, no ATMs, no internet cafés, and no tour agencies. Just two main beaches lined with simple accommodation, one fisherman village, and a dirt path between them. When we told a friend back in Thailand of our recent trip, she was shocked to hear the island had gained electricity since her visit two years prior.

In addition to those stark departures from my western idea of normal, I was confronted with smaller, more eccentricities of small island life.

In Thailand, if you can dream it, you can drink it. The hard partying reputation of the Thai islands means there are as many bars as guesthouses and there is never a quiet night. On Kecil there was definitely a small party scene, but it was confined to one or two dance parties spilling out of beach bars, and they were few and far between. On one of our first nights we walked up to a “bar” that consisted of bamboo mats and squat wood tables strewn about the stand, a fire thrower entertaining the patrons and a bartender holding court behind a small makeshift bar.

When we approached we were given two options: rum, or beer. We went for the rum and were delighted to be handed a bottle of Orangutan, two cans of coke, and two paper cups. Quite a reminder that we were after all in a Muslim country on an island with limited deliveries from the outside world. 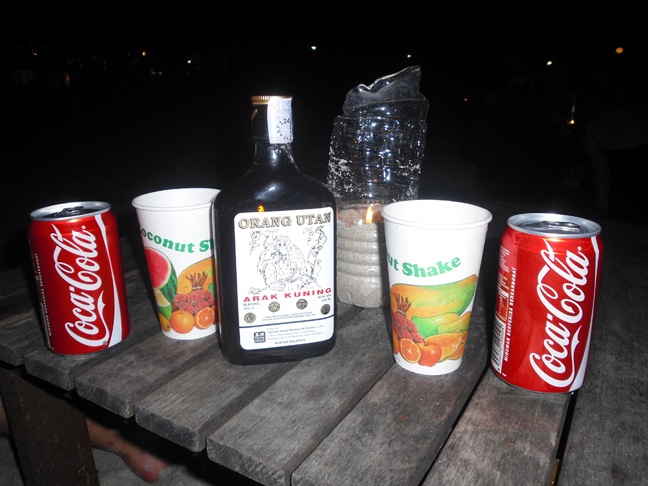 I suppose I did not too long ago come off a stint working at an animal shelter in Thailand, but I was struck by the lack of canines on this island. I suppose they were never introduced and the locals wanted to keep it that way. In their place, the island was overrun with kittens, to the chagrin of our guesthouse owner who was constantly picking up the knocked over trash cans they scampered out of, but to the delight of backpackers missing Fluffy back home. 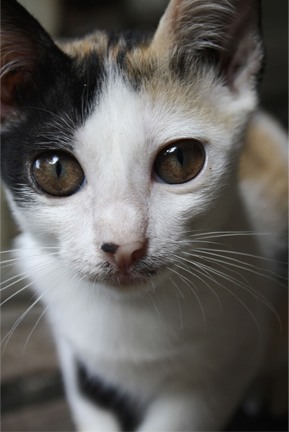 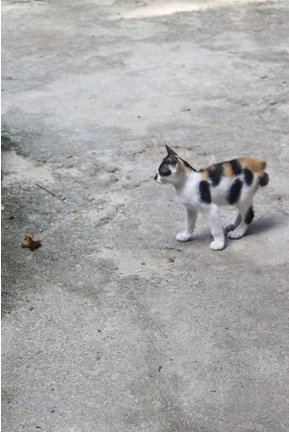 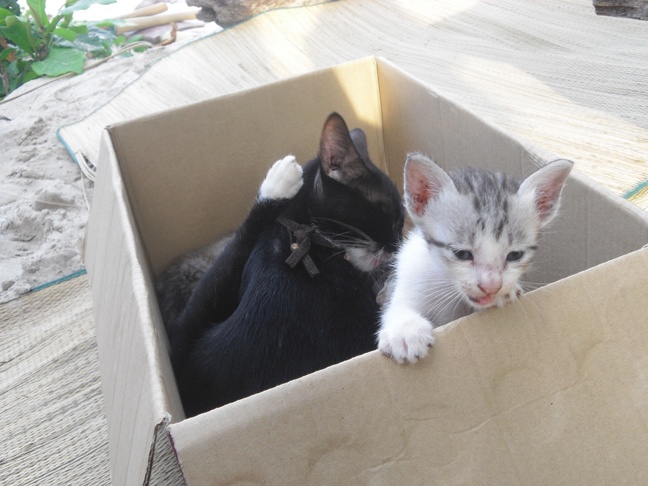 Much to my indifference, sports are a huge part of life across the globe. However, on an island this small there’s no room for a stadium let alone that the small location population would have a hard time populating two teams and an audience to watch. So the area’s sports fix came from a daily beach volleyball game, a surprisingly organized affair that was as welcoming to newcomers as it was competitive. A mix of locals, expats and backpackers would gather daily for a game that sometimes raged long beyond when I had closed my beach reading and head home for the day. While I’m a long way from ever joining the game, it was fun to see such camaraderie and community form. 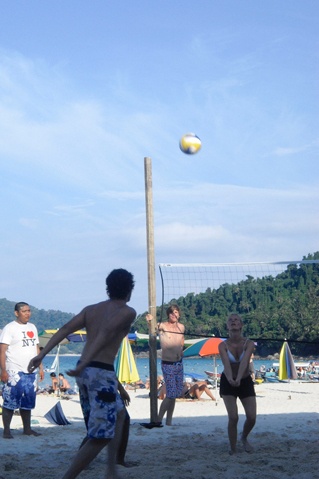 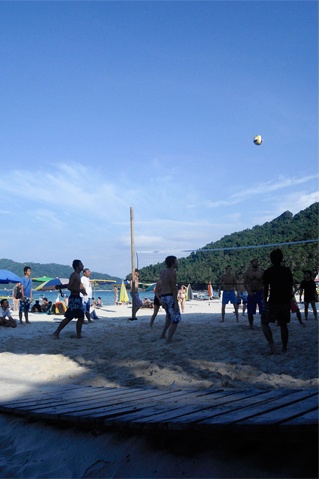 With the exception of one or two fancier western style places, Kecil has a decidedly local dining scene. On Long Beach, where we shacked up, there were three restaurants. The unusual part? They all sat side by side on the beach, so close together that it was often impossible to tell which one you were actually seated at, and the menus were near identical. It at least made for some entertaining fake “where shall we dine tonight?” conversations. 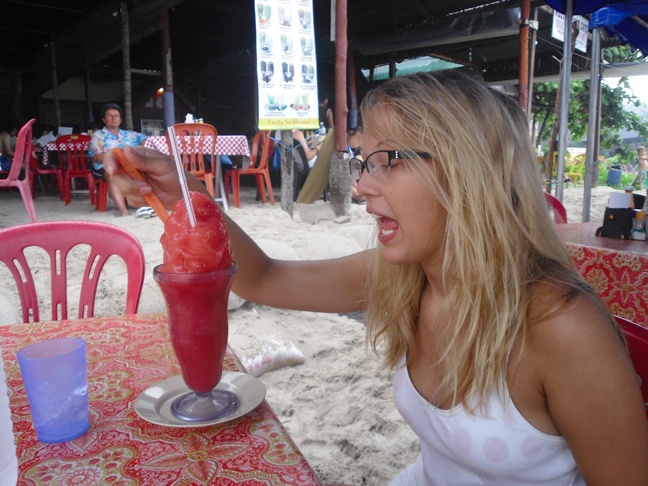 It was impossible not to notice the difference between the diving in tourism soaked Koh Tao and the more laid-back Perhentians. Of course thousands of factors could go into determining the health of the reefs, but by in this case, less scuba traffic meant the dive sites stayed a little more fresh. 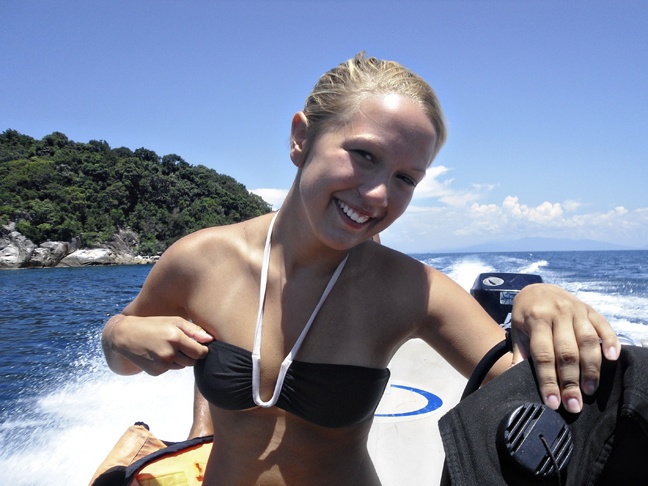 I can easily say that the beaches on Palau Perhentian were the most beautiful I have ever seen. Even the main public beaches were clean, clear, and not overly crowded. Heading off the main drags and the vistas were beyond what I thought magazines could only create with Photoshop. Again, I believe it all comes down to small population and small tourism industry. 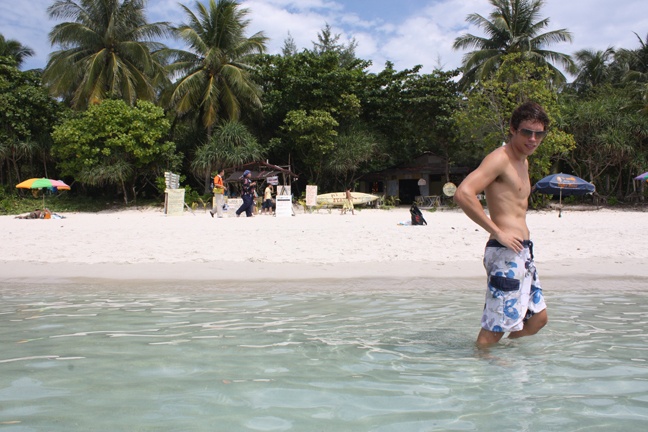 Aside from the aforementioned rum bars, evening entertainment came in the form of looking up at the sky. I don’t think I’ve ever seen anything quite as pretty as a Malaysia sunset. After one lovely day of exploring the snorkel spots of the islands Mark and I hiked through the overgrown path to Coral Bay, on the other side of the Perhentian Kecil. No roads or street lamps here, so we brought along the small flashlight that my mom had stuffed in my bag back home while I rolled my eyes. 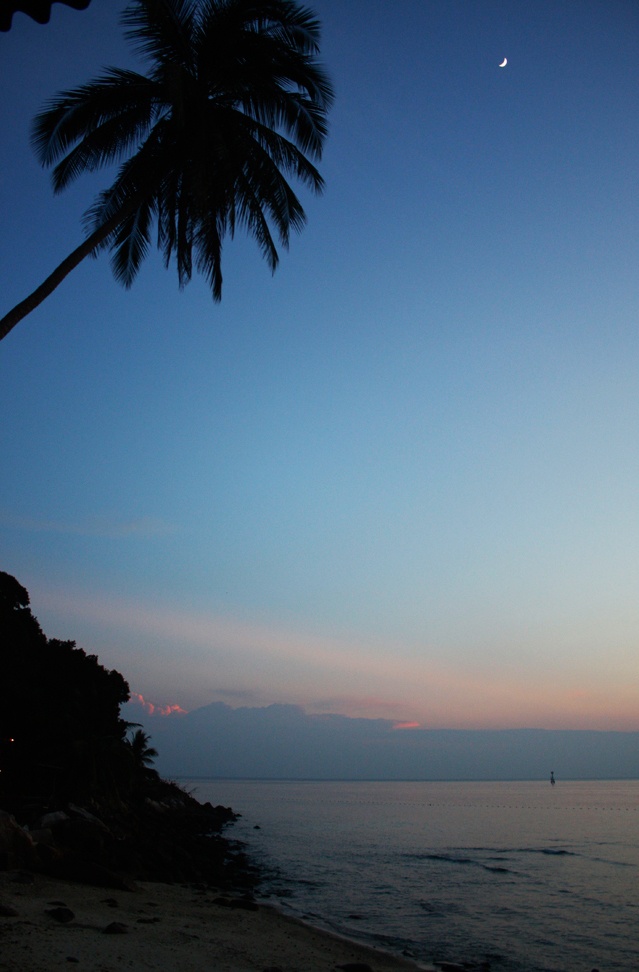 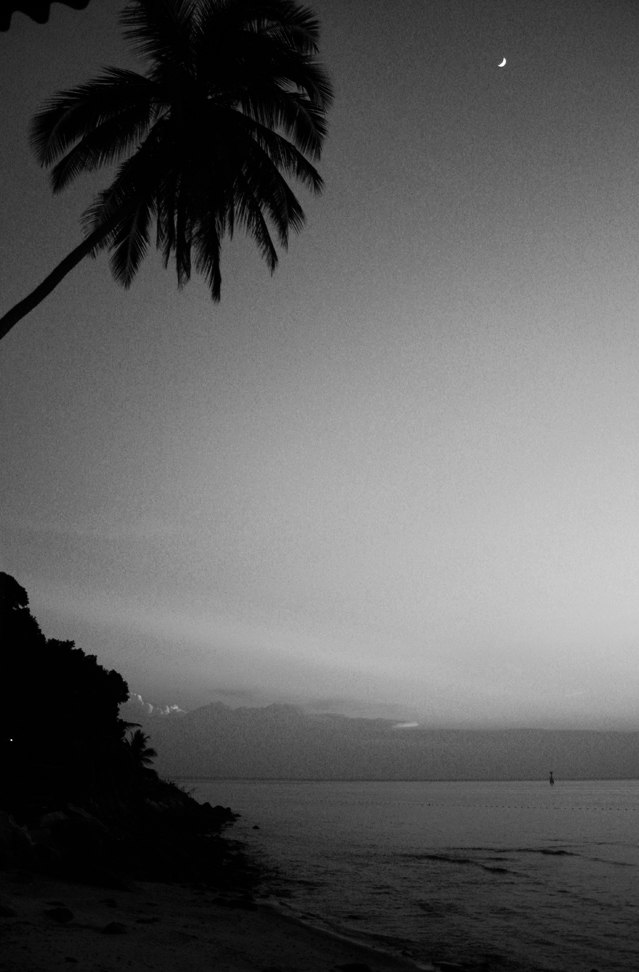 We found a restaurant with a nice deck raised off the sand and laughed at we flipped through the menu. Promises of Euro Bliss, Savory or Unsavory choices and oddly, a Nemo fish salad were all on offer. 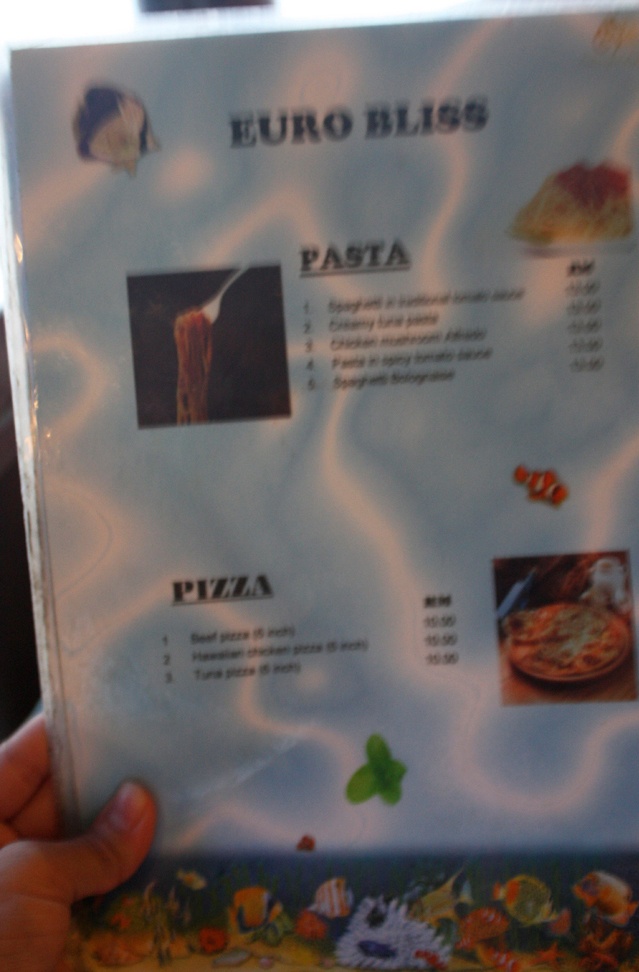 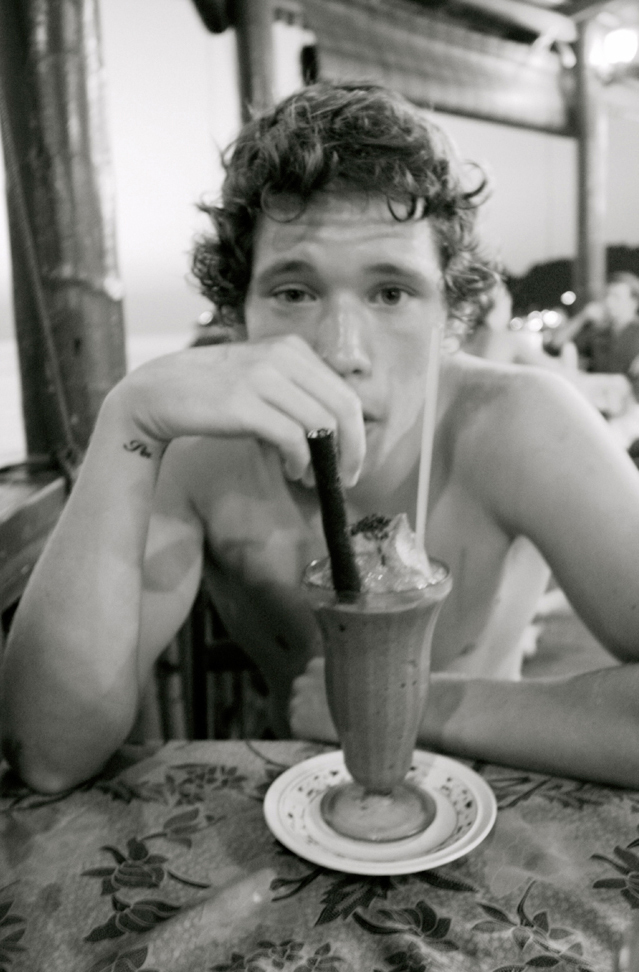 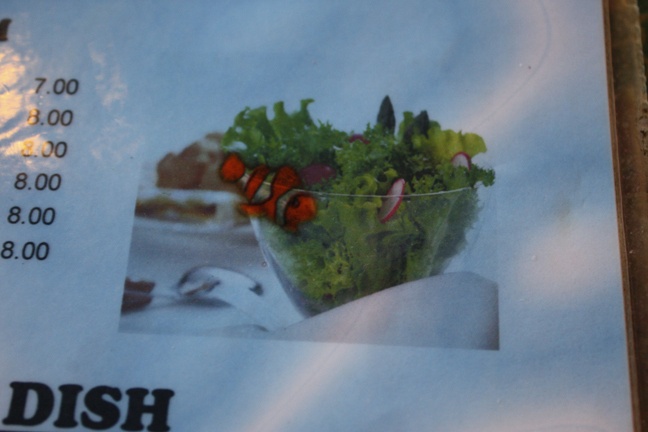 While we indulged in a rare delicious western meal, we watched the sky turn from orange to purple to blue behind a landscape of clouds and islands in the distance. Boats docked up, fisherman pulled in the day’s final catches, and the sea was quiet. 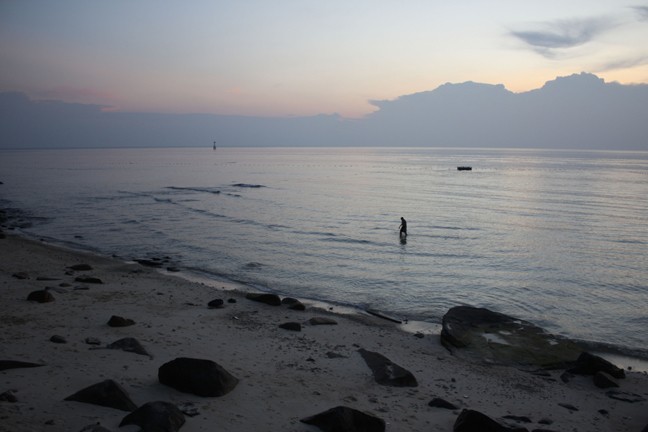 This is one of my favorite photos of my entire trip to Asia. Someday I’d love to have it canvas wrapped, though with my vagabonding lifestyle I don’t know where I’d hang it.

But the peace did not last for long. Soon a storm began to brew in the distance. Throughout our journey to Malaysia I had been awed by the landscape again and again but what we were about to witness was truly the most amazing natural wonder my eyes have ever seen. Through the clear sky and total lack of light pollution we watched a lighting storm percolate and erupt, enclosed within a cloud system perched on the horizon. The night’s show was a dramatic one.

While change is coming and coming fast to South East Asia, I hold out hope in my heart that the Perhentians keep their small island charm and resist the siren song of mass tourism. Because all these little charming factors add up to one very special place, one that I will hold in my heart long after the first inevitable ATM makes it to the island.