The few hours on a mini bus ride to the Cameron Highlands would have been pretty unremarkable, if not for the man who got on for the last twenty minutes carrying a plastic bag containing a live chicken. It just bobbed its head around, seemingly unaware of its likely fate. Once the bus stopped and the chicken unloaded, we were met by nightfall, cool air and a whole mess of taxi drivers. I had made reservations at a popular guest house a few nights before and asked to be taken there, but the taxi drivers said they were full. I assumed they were trying to get commission from another place and insisted they drive us there. When we arrived the guesthouse manager looked flustered and told the taxi driver they had given our room away! I was fuming but when I later had access to email I saw they had sent me a message saying a guest was very sick and they didn’t want to move her from her room. Oh well, we ended up at a lovely guest house and signed up for a Cameron Highlands tour the very next morning, which is the best way to see the plantations, hiking trails, and other roadside attraction the highlands have on offer. Went exploring for a quick dinner and ended up at this gem where they served us on banana leaves. At least we didn’t have to eat with our hands. 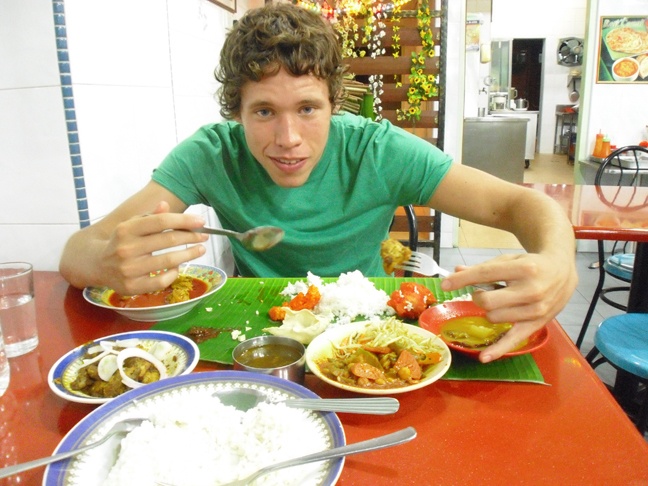 The next morning we woke up bright and early for our tour and were excitedly told that there had been reported findings of the rafflesia- the world’s largest flower. After taking nine months to grow, the plant flowers for only 5-6 days, so sightings can never be guaranteed. In this part of the world indigenous people who still live in the mountains are paid a sum by tour agencies if they report the location of a flower. So we piled into a jeep wrangler, which seemed a bit crowded and overpacked but doable. Then we stopped to pick up three more people. Seriously cramped, we headed for the hills. After a forty minute drive the driver announced we would be going off road, what a delight! Like tightly packed little sardines, we bounced around on the worst excuse for a driving surface I have ever experienced, at least able to use each other for cushions. You can see the results in the video below. But despite our discomforts, the scenery was amazing and we were pulling into the densest jungle I had ever seen. 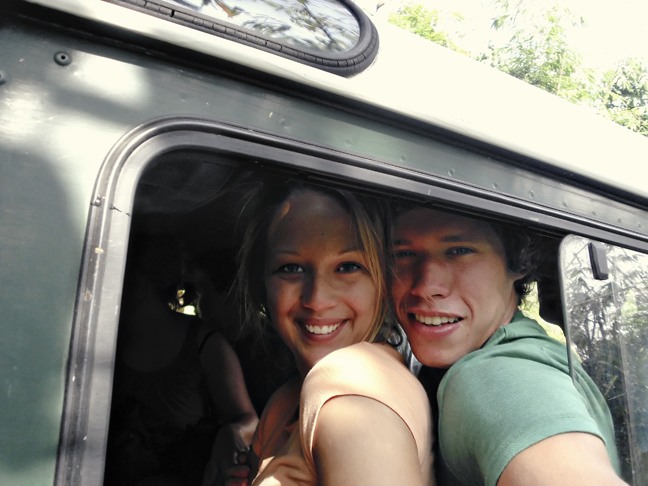 Hanging out the window… 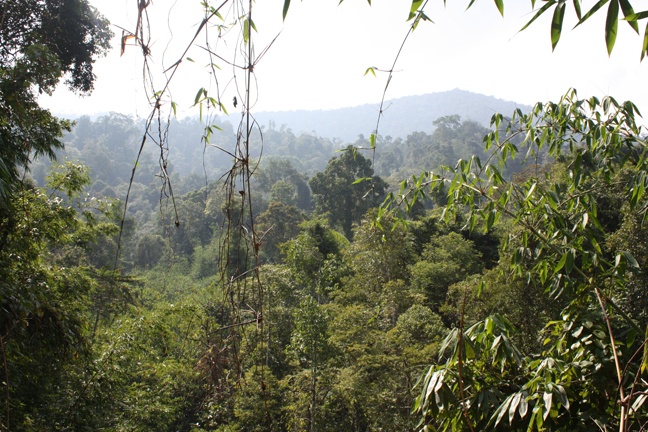 … and the view we were seeing

When we disembarked, bums numb, we were joined by a man who emerged from the bushes, literally, and gave us crowns of ferns to wear in honor of the lunar eclipse happening that night. As we walked he shared with us lots of the local lore about the eclipse and what it means to the people. Mark and I tried to make conversation with the people in our group, two young french couples who spoke perfect English but chose not to and constantly seemed to be conspiring amongst themselves and three very serious girls from the Czech Republic who had backpacked all throughout Thailand and not once stopped at a beach! Needless to say we didn’t have all that much in common with them. We had great conversation however with both the local indigenous guide and the group leader who shed a lot of light for us on Malaysian culture. 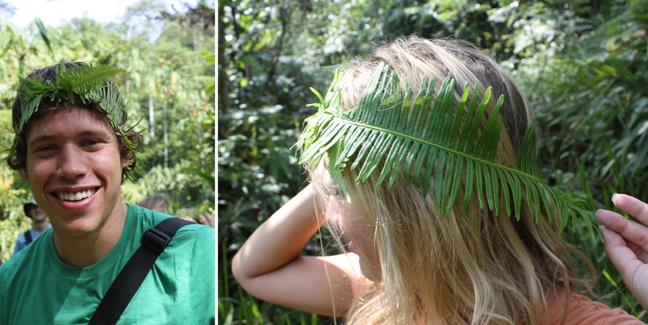 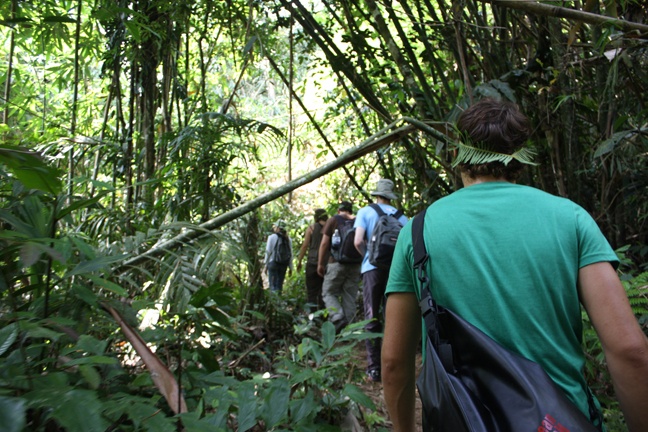 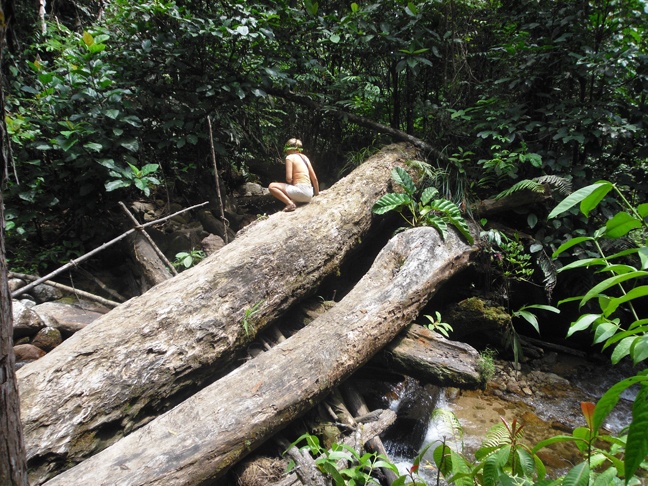 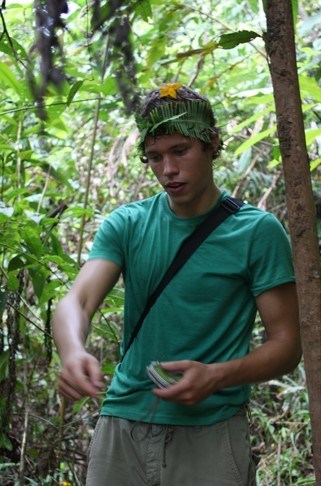 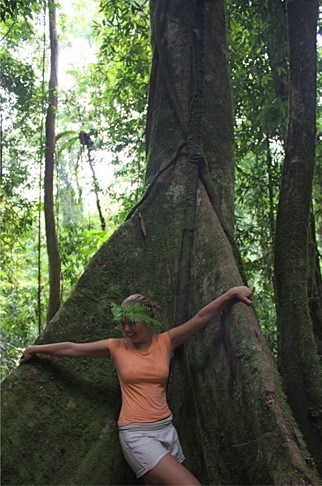 I was going a bit camera happy along the way but it was hard not to. There were bugs on steroids and plants that I had never seen anything like before. My camera skills weren’t phenomenal with all the low lighting, but I still walked away with a full memory card! I was so glad I had bought those ugly walking shoes for Angkor Wat, because flip flops would not have cut it here. It was over the river and through the woods. 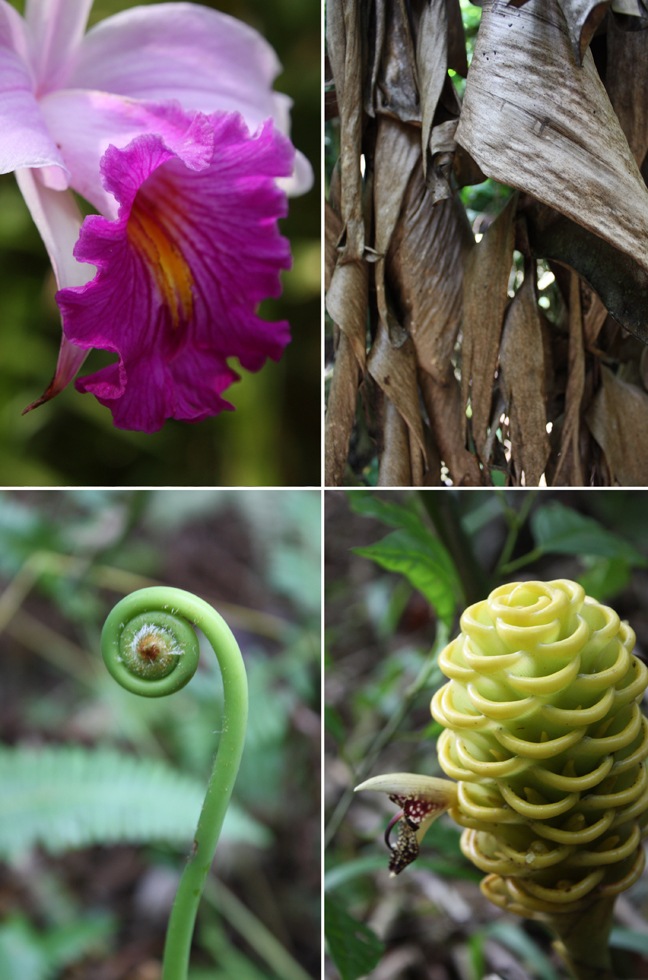 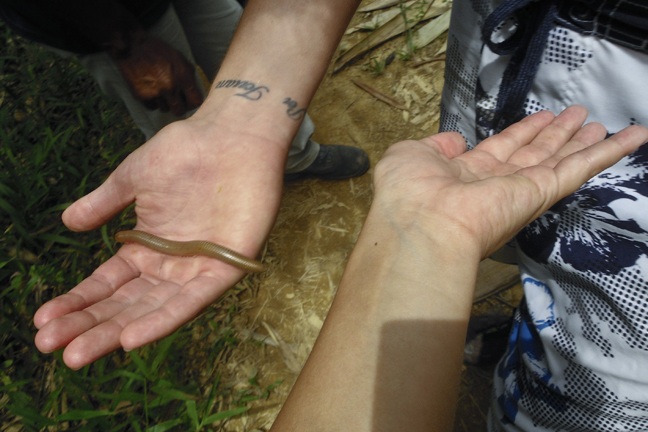 At least he’s not in our room!

The best was yet to come. After two hours of hiking we reached our own summit, the rafflesia. Along the way the guide had pointed out a few future blossoms in various stages of development. Apparently the rafflesia is actually quite fascinating, as far as plants go. Its a parasitic plant that grows on other trees and roots, a tumor looking growth sucking out the host plant’s nutrients until it is so big that it falls from the host. At this point it remains dormant for months before finally slowly opening and flowering for a brief five-day period. Did I mention it smells like rotting flesh? It developed this device as a way to attract flies to spread the pollen, earning it the nickname “corpse flower.” Just be lucky this isn’t a scratch and sniff blog. 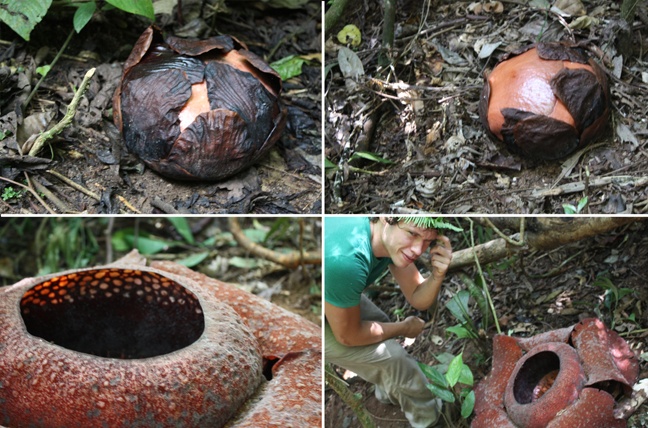 The elusive rafflesia in various stages of development 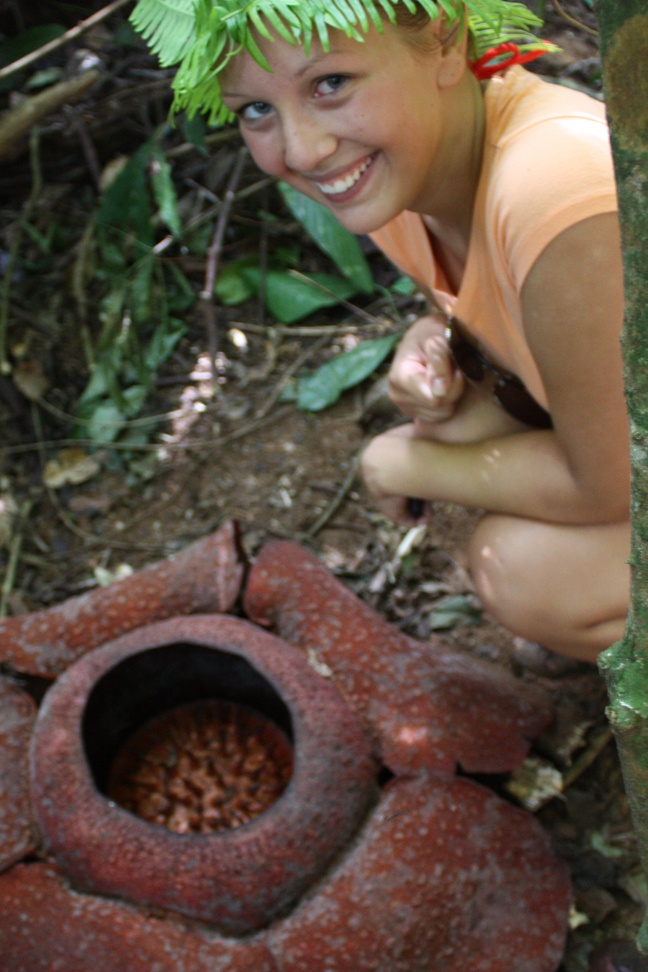 Feeling very lucky, awed by nature, and glad that we aren’t corpse flower loving flies, we headed back down the way we came. While the Cameron Highlands are known as a cooler retreat from the sweaty lowlands, this doesn’t exactly apply when you’ve been hiking in the sun for hours. So we were thrilled when the guide announced we were approaching the waterfalls. We had come prepared in bathing suits and basically ran shrieking down the hill tearing our clothes off and jumping into the freezing water. It was at this point we realized no one was following us, our stick in the mud group just sat on the banks and swatted flies. Feeling like we were in some sort of awkward play that involved us in our bathing suits in a river while everyone stared boredly, we moved on pretty quickly. As we were leaving another tour group was coming down to the waterfall, laughing, chatting and getting ready to jump in. It was then that we felt a bit jealous and bummed by our group, but I guess you can’t win them all. 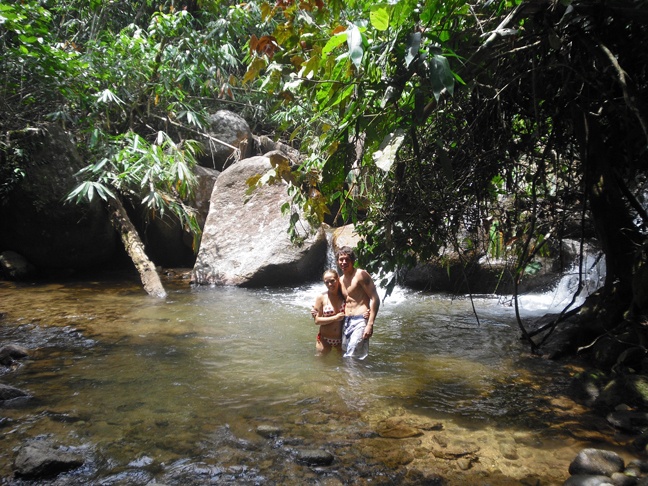 We came out at a slightly different entrance to the jungle, where we were led to a little clearing where we were taught to use blowpipes. It was a little hokey and touristy but I admit it was still fun and interesting to hear about how the indigenous people still primarily use these same blowpipes to hunt. 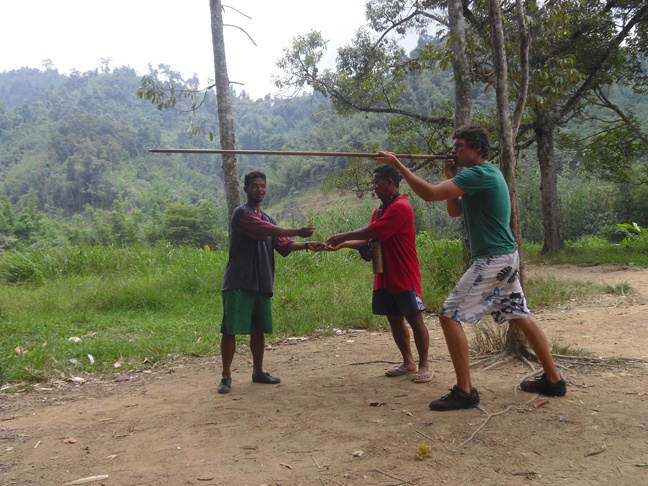 During the hike I had my big dslr and so Mark took my point and shoot and shot some really fun video on it. I don’t shoot video very often but had so much fun watching it, this was a good reminder to start taking more! I made a little movie out of it and some other photos not shown here in iMovie, so turn up your volume and take two minutes to get a better idea of our morning hiking in Malaysia.

It’s funny because looking through all my pictures from this trip, I am in such a tiny percentage of them since I am always behind the camera, so seeing this where I’m the “star” is a little odd. Anyway, believe it or not this was only half our day! Stay tuned for Part II of our Cameron Highlands adventure coming up soon.

Hike Your Heart Out Koh Tao: The Burmese Pagoda

Hiking Ben Nevis: For The Desperately Out of Shape