With Kentucky in the rearview and Tennessee return trips already formulating in my mind, I still had one last destination on the big ‘ol state hop I was on. Next stop, California. 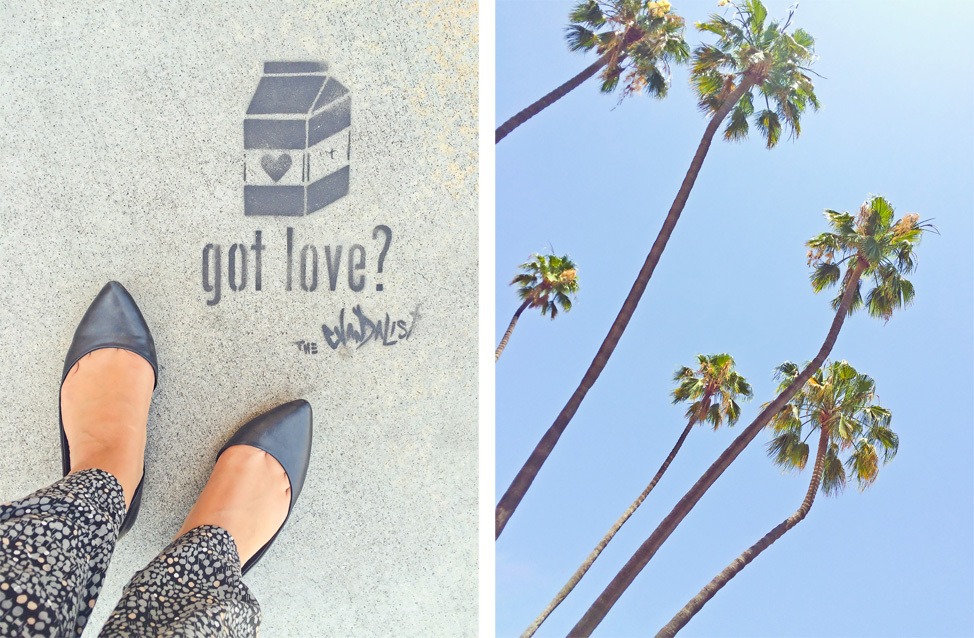 It was Father’s Day weekend, the perfect excuse to visit my dad in his freshly adopted city for the first time. It was to be my first true dose of LA, a couple days sequestered in Venice last year aside.

When my dad first announced he was leaving Philadelphia to take an exciting new job in Los Angeles, I admit I was skeptical. This was the year my dad was meant to retire, and I was selfishly looking forward to seeing more of him. Yet the man loves to work — and I suppose I do have my own work ethic to thank for that. But now, not only were international visits unlikely anytime soon, so were our chances of running into each other on the East Coast. 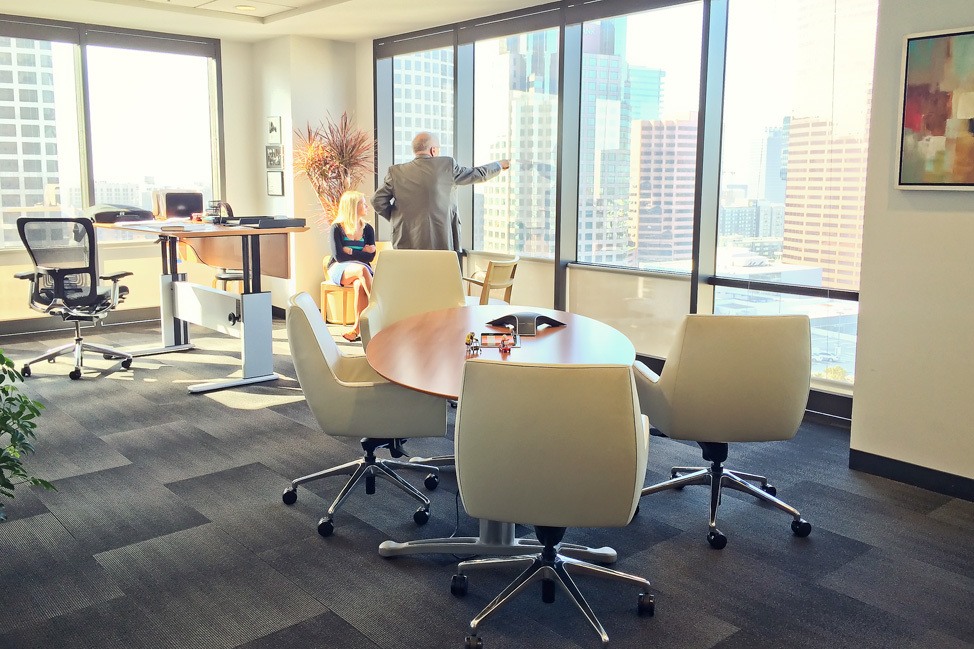 But it didn’t take long after landing for me to realize my dad was happy in The Golden State — really happy. He has a new job full of challenges, a new house full of DIY projects, and a new climate sans snow. And best of all, for the weekend, he had his two youngest daughters in town to celebrate. 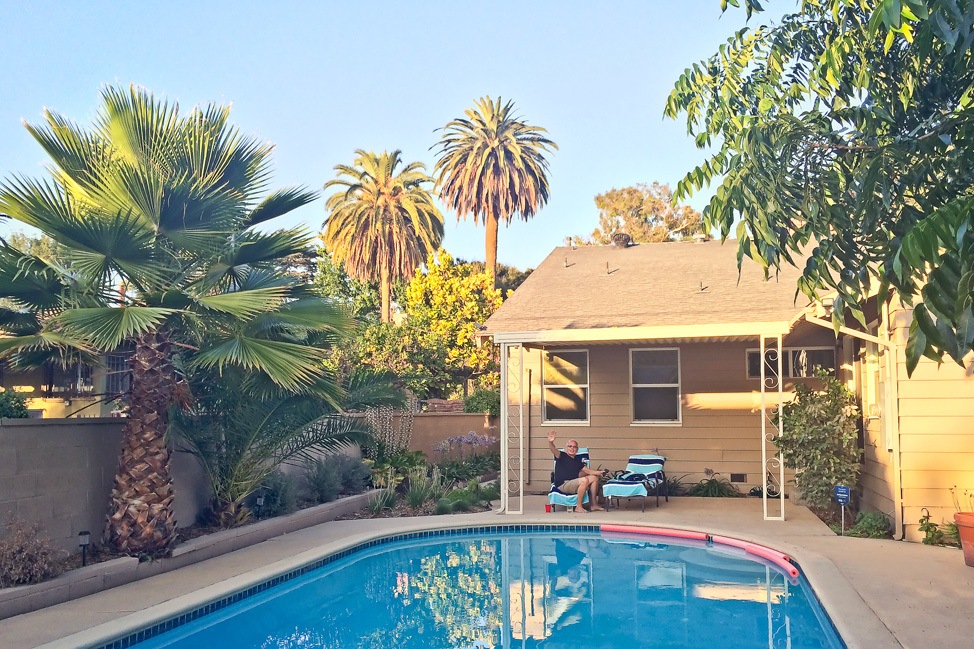 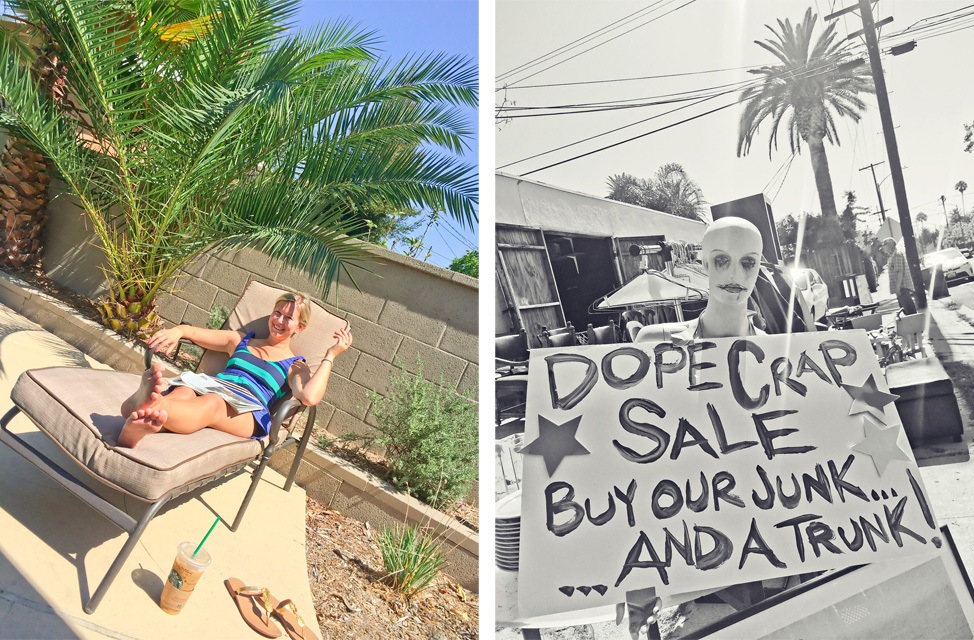 Our first priority for the weekend was an important one — relaxing. I got off the plane Wednesday night with a sinus infection that had only gained traction since I left Kentucky (“so should we drive home or to the hospital?” was my dad’s greeting off the plane) and my dad and sister, who arrived Thursday, both keep the most insane office hours of anyone I know — so suffice it to say we were all looking forward to a little collective downtime over the weekend.

Friday was Take Your Daughter to Work Day, in which we visited my dad’s office and then took what felt like hours to navigate Downtown Los Angeles traffic back to his house to wait for various furniture delivery people. Saturday was pool day. However, lounging didn’t last long. Despite those deliveries, at some point my dad started to get a little self-conscious about the still unfurnished state of his home — my sister and I’s favorite game of CEO or College Student?, played by pointing at DIY styrofoam media stands and laughing, was clearly starting to take a toll — and so we revived a beloved Saturday morning Baackes tradition. Competitive garage sale-ing. 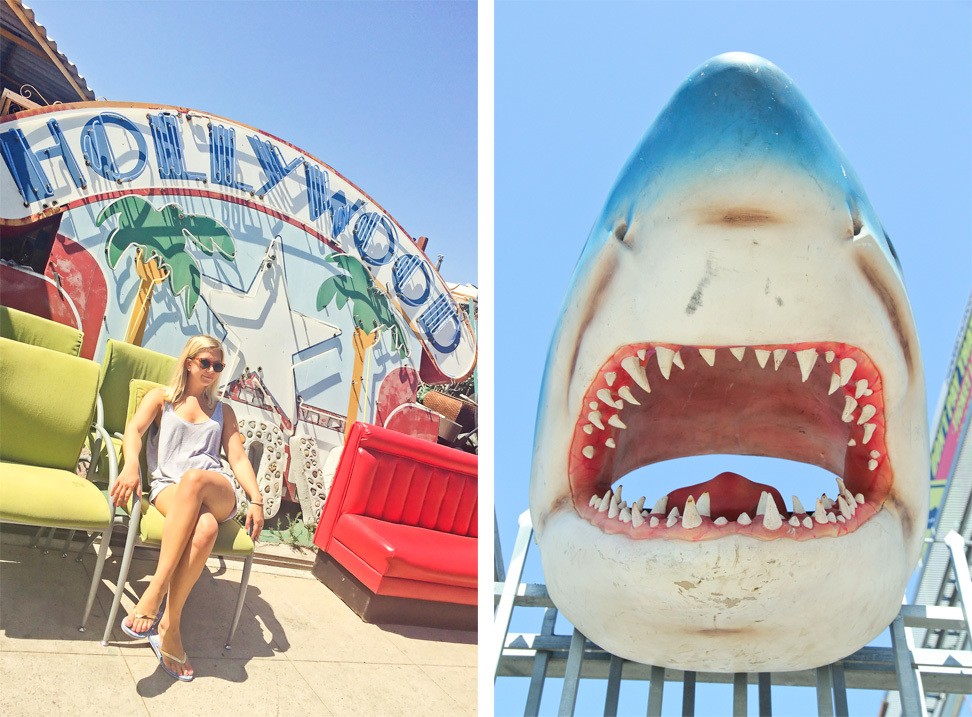 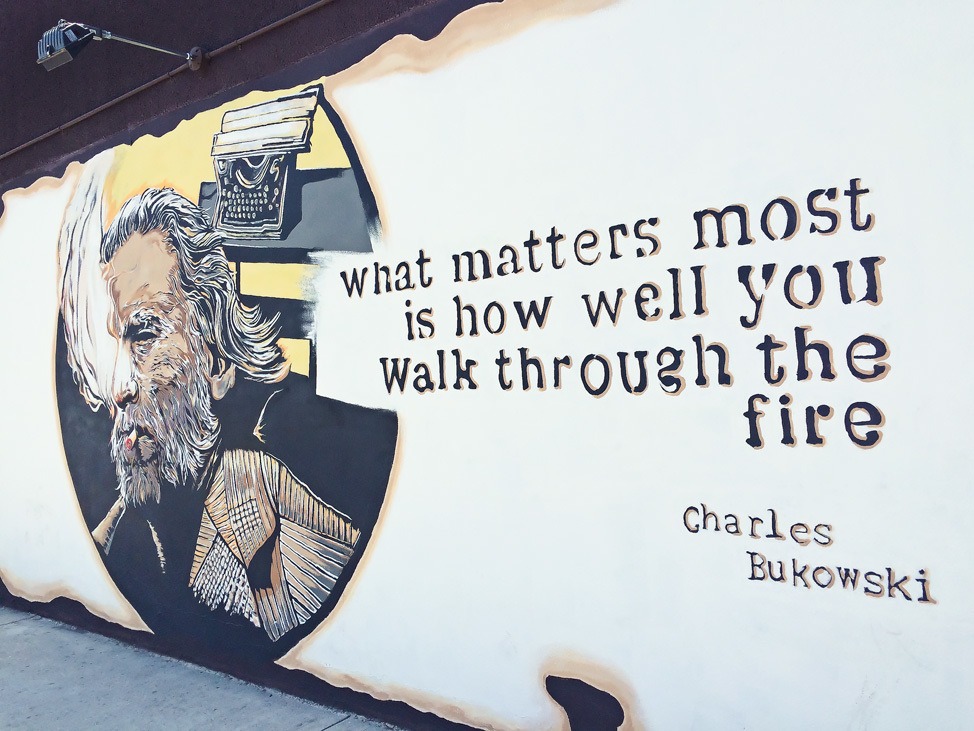 Because this is LA, we also mixed in a bit of street art peeping and old prop lot scouring. In the end we walked away with some major scores, including a few lamps, some kitchen gadgets, a lead on a booth for the kitchen nook… oh, and a car. Yup. When I overheard my dad asking to test drive the white convertible with the cardboard For Sale sign on it while I was browsing through some 25 cent books, I figured we were just sneaking a silly fantasy ride into our day. So no one was more surprised than my sister and I when we pulled back into the driveway and he made an offer. We giggled the whole way home!

You gotta love a man who buys his shoes at Payless but spontaneously purchases white convertibles at garage sales. 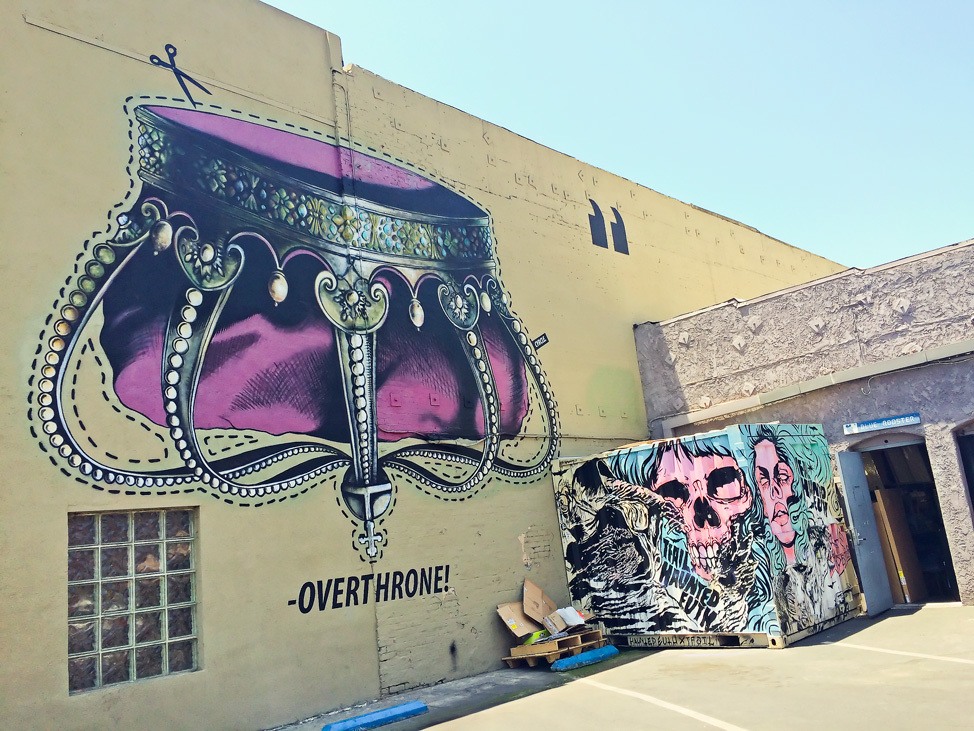 Los Angeles might be known for nightlife, but our evenings were pretty subdued. On Friday evening we had made our way to LACMA for dinner and a free outdoor jazz concert that we hated so much it was hilarious. Saturday evening, we kicked things off with a drink at Angel City Brewery, where I introduced my dad and sister to two of my LA friends, Spencer and Lindsay. Later, the family indulged me by agreeing to see a movie at one of the old one-screen marque theaters I’d become obsessed with. We settled on Vista, due to both its proximity to my Dad’s place and the fact that it was showing Jurassic World.

For me, it was the highlight of the weekend! I don’t know if it was the history of the theater, the amazing-ness of the movie we saw or the fact that my dad dropped us off to buy tickets, turned around to park, and then yelled from the stop light in front of the theater, “DON’T FORGET I’M A SENIOR!” to the amusement of everyone in line — but it was the perfect LA evening. (Gotta love that senior discount.) 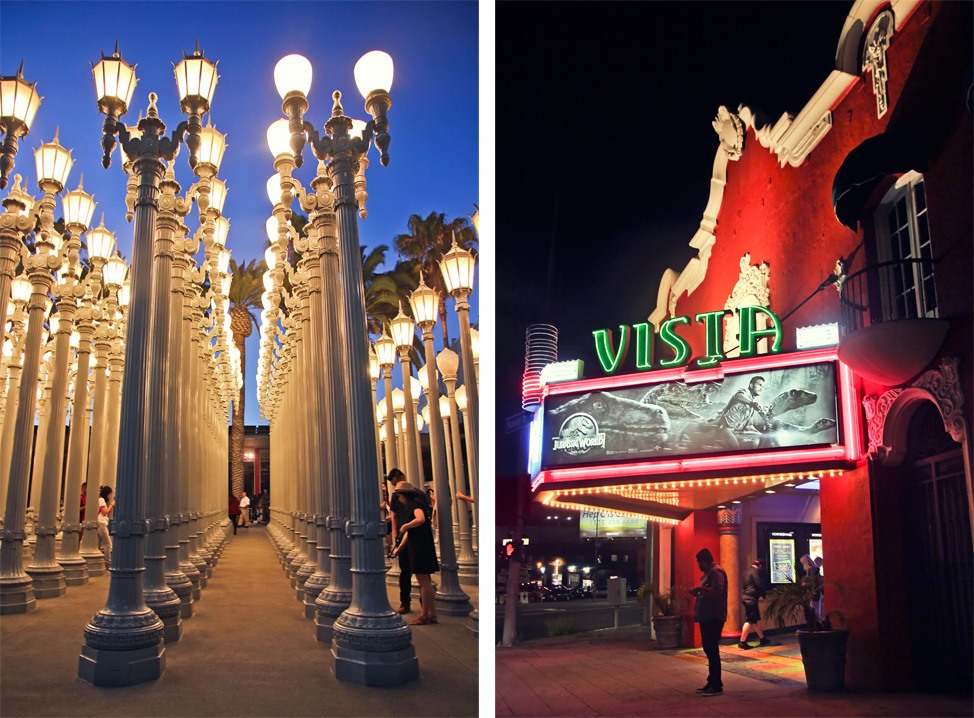 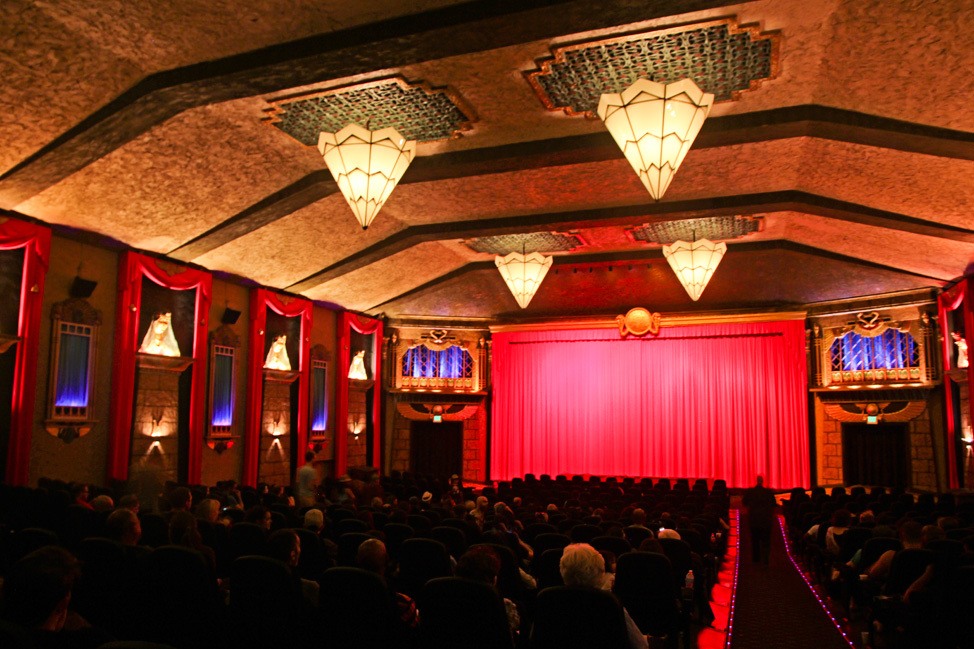 Sunday was Father’s Day, and we assured my dad we’d be up for any cheesy tourist activity he wanted to attempt. And so we went for gold — a double-decker bus tour of Hollywood and Beverly Hills. 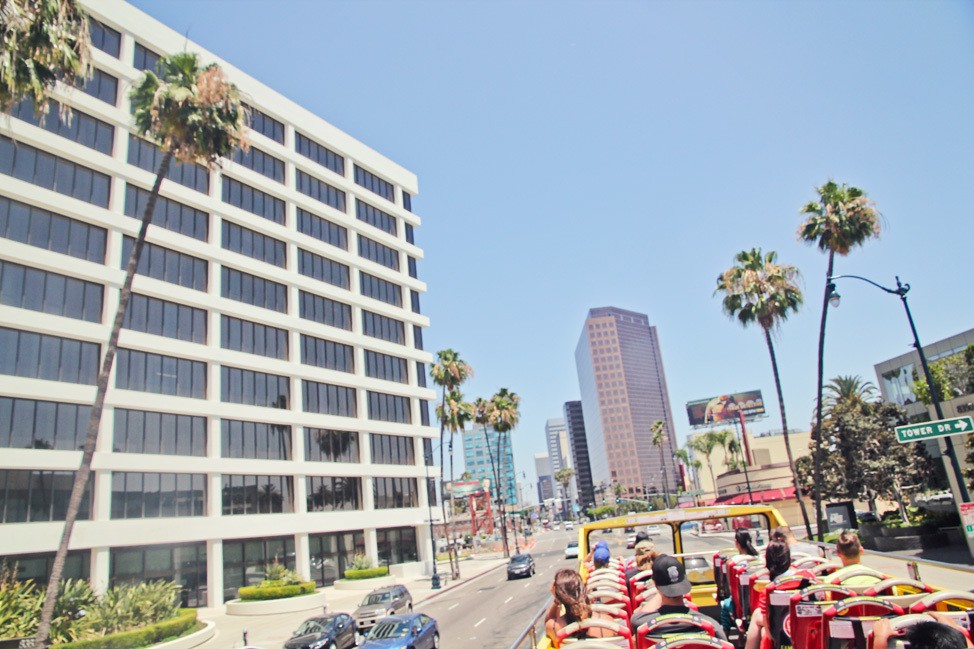 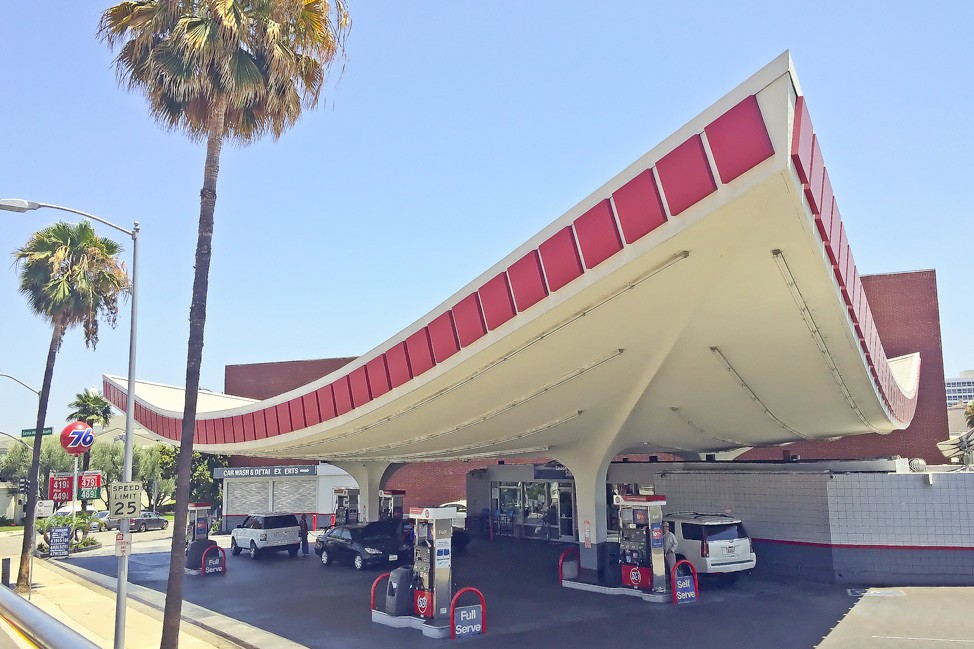 We decided to forgo any hopping-on or hopping-off in favor of snagging the best seats on the roof, staring out at the scenery and zoning out to the pre-recorded narration in our headphones. As total LA newbies, I have to say it was a helpful way to get the lay of the land for a small portion of this sprawling city, and I found myself keeping a note in my phone of restaurants, bars and streets that I wanted to return to.

Later, we capped off the night with dinner at a steakhouse my dad had already become a regular at — he managed to sniff one out even in Koreatown — and the world premiere of the long anticipated Will Ferrel and Kristin Wiig Lifetime movie. I told you things got crazy! 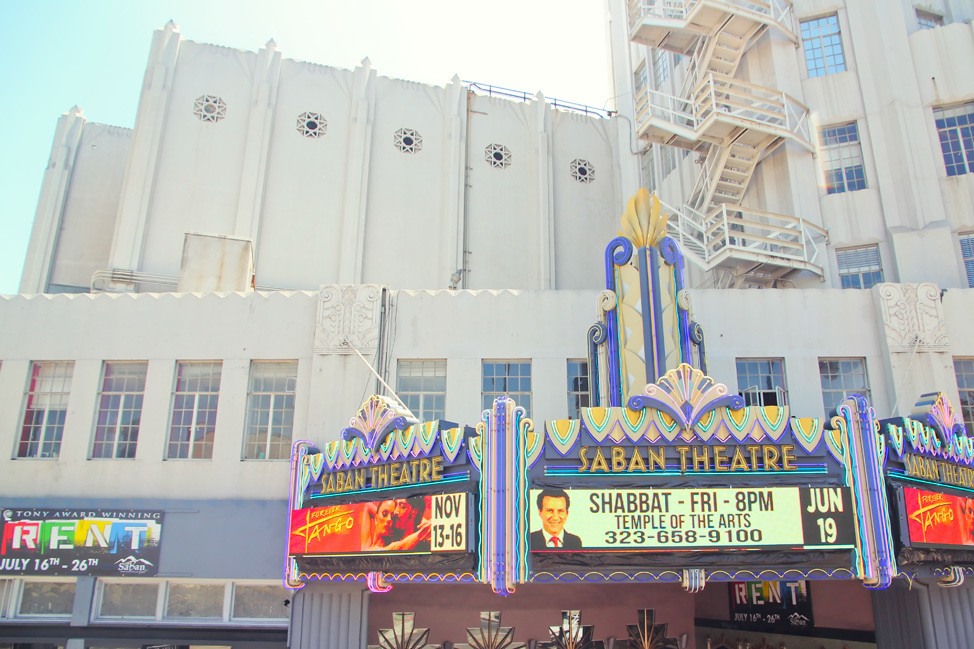 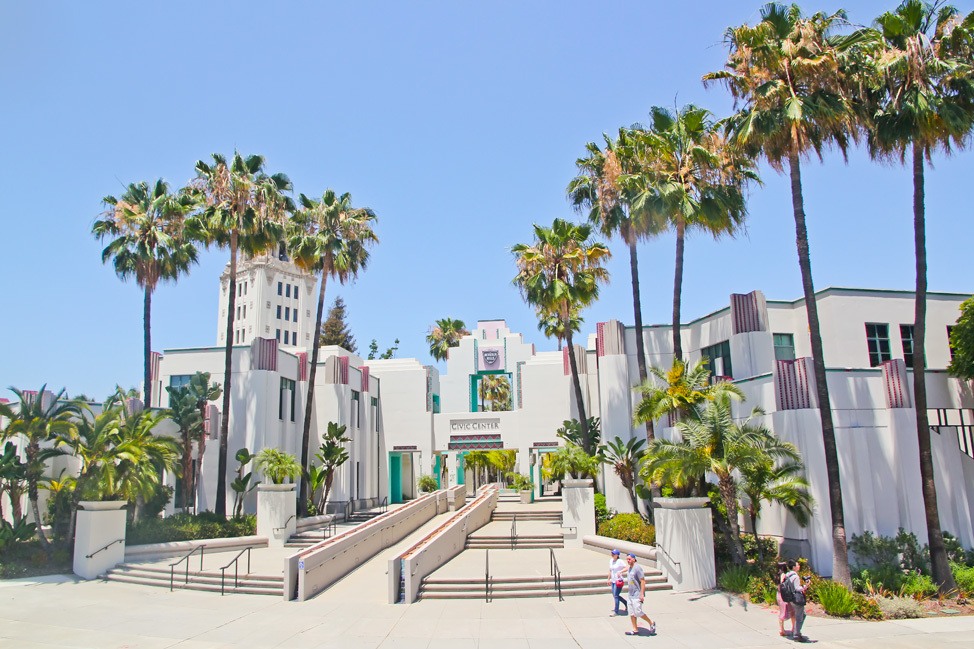 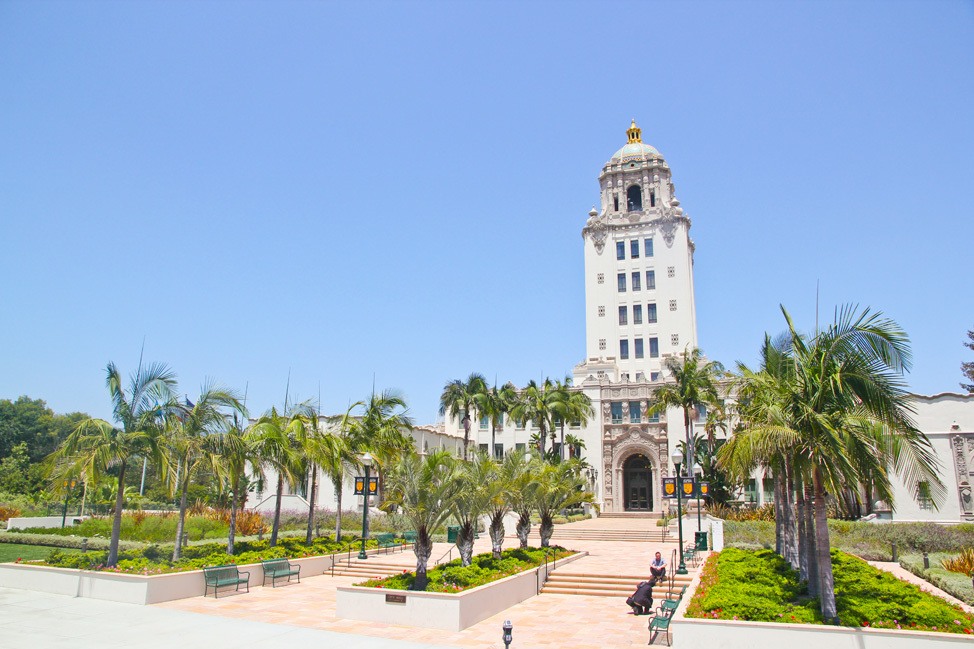 I admit, Los Angeles didn’t win me over on this trip. It’s so spread out, it’s so hard to get around, and it’s so hard to do right. So many of the iconic places I’ve always heard about in LA, when I see them I think… really? That’s it? I mean like literally The Viper Room is basically in a strip mall, Chateau Marmont looked like a Lake George theme hotel about to go into foreclosure, the Chinese Theater was like Times Square on diet pills, and the highlight of many a city block I got lost driving down was a Subway Sandwich franchise. Frankly, I’ve struggled to find the magic in Los Angeles — and when I do, I struggle with how long it takes to get to said magic due to traffic and difficult driving conditions.

I know plenty of LA lovers are going to be like, “those are all tourist spots!” and “you looked in the wrong places!” and “you’re biased towards New York!,” and I am here to assure you that each and every one of those accusations is true. The good news is, now that one of my favorite humans is living there, I have no shortage of LA in my future (in fact, I’d return later in the summer for a much longer trip). So fear not — I have plenty of quality time with this city ahead. 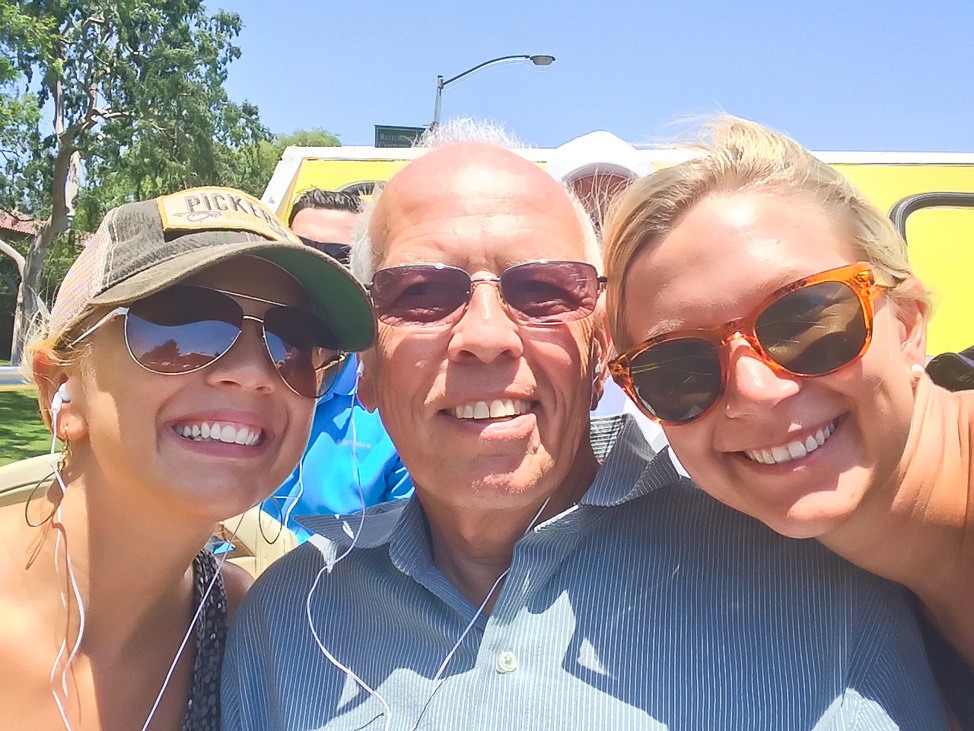 But this trip? It was all about quality time with these two. And that meant it would be a winning weekend, no matter where we were.

Next up, back to New York! 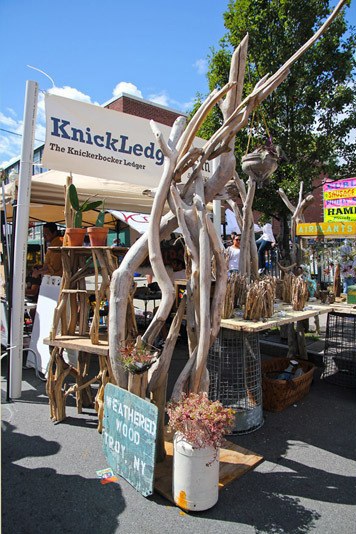 A Boozy Goodbye to New Orleans

My Travelversary: Seven Years of Travel