Hiking Ben Nevis: For The Desperately Out of Shape

For those of you who haven’t spent the last 20 days memorizing the Scotland Lonely Planet 11th Edition, Ben Nevis is the tallest mountain in all of Great Britain at 4,409 feet above sea level. It attracts approximately 100,000 outdoor enthusiasts each year who joyfully lace up their hiking boots and sail up the 10.5 mile path to the top. Make that 99,999 enthusiasts. The last person was me. 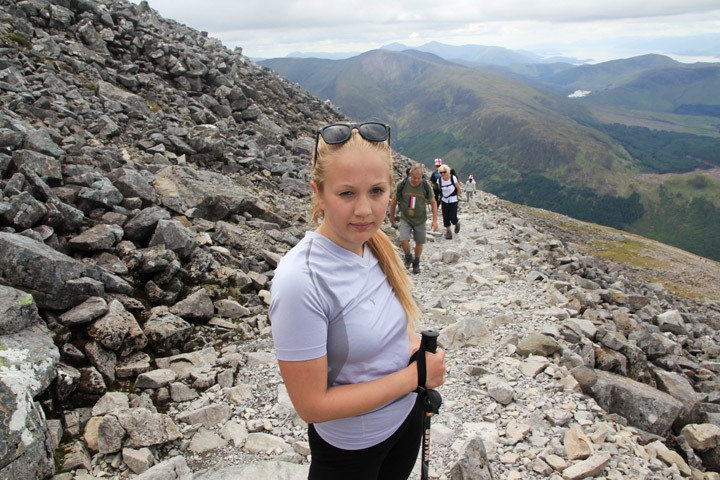 I am not what one would call an “nature lover.” While in the past two years I have become an avid scuba diver, a rookie whitewater rafter, and a one time sea swimmer, I am still prone to spend my days holed up inside, reading, writing, and photo editing. So imagine my surprise when I found myself at the base of a beastly mountain, squirming in brand new hiking boots and fiddling with a walking stick.

The drive to and from Ben Nevis through Glen Coe is spectacular enough to almost make you forget what you are heading to do! The vistas alone are great, and at several of the viewpoints there are bagpipers, adding to the atmosphere. I heard that one of them carries a West Highland Terrier occasionally which I think might be Scotland stereotype overkill. 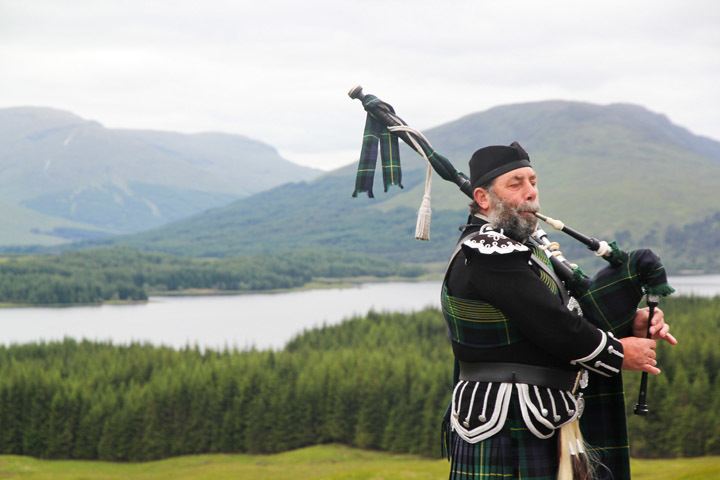 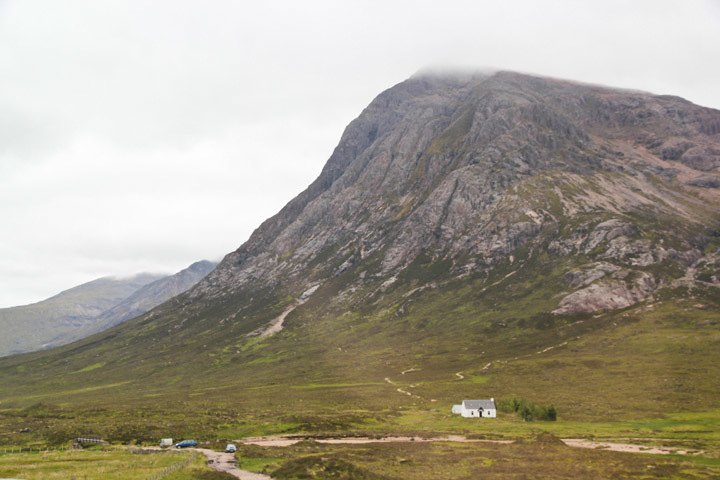 Then, when we reached the entry to our trail, we were greeted by two perky highland cows, who were happy to pose and were subsequently featured in as my Week 2 Photo of the Week! I seriously think that I might have to abandon all life goals and become a highland cow farmer. I’m a bit obsessed. 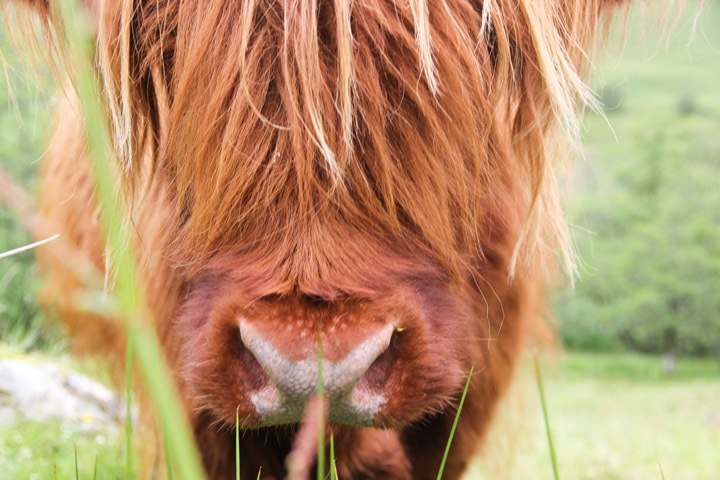 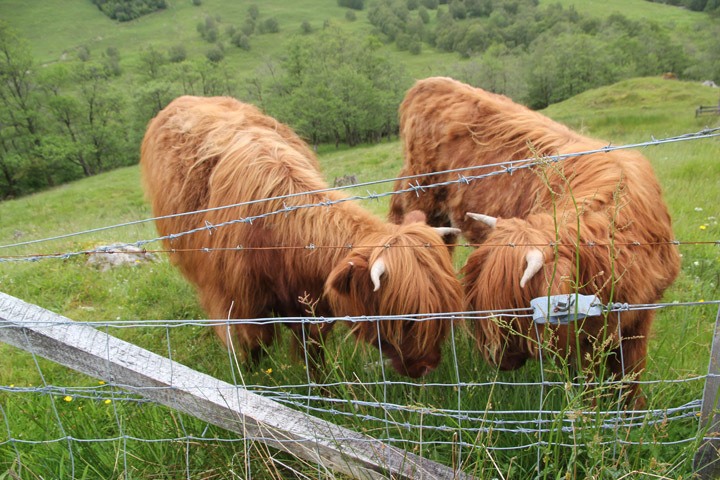 I was finally ripped away from the paddock by my guide Mark, who has hiked the mountain twice before, once as a preteen and once at 21, complete with sleeping bag luges back down the mountain. I warned him that despite my somewhat slim appearance I was actually a 300 pound person hiding inside the body of a 125 pound person. I consulted with Lonely Planet, who mockingly told me that “any reasonably fit person” could manage the hike in 5 or 6 hours. Mark said we were aiming for four. I estimated eight. And with that we began. 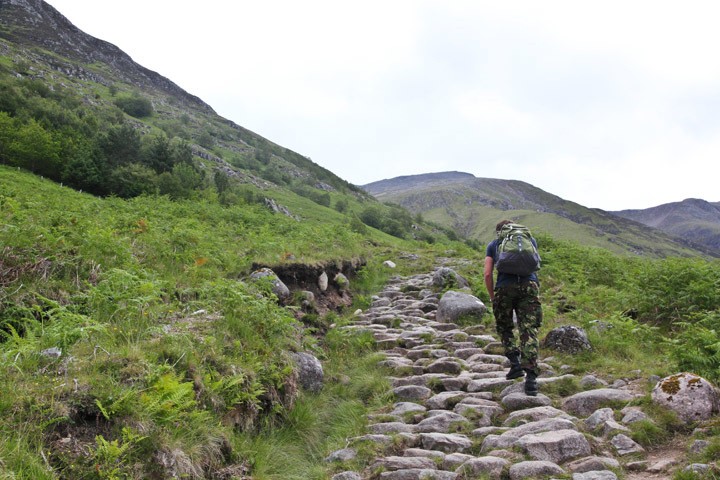 Me: I can’t believe I bought hiking boots for this.
Mark: Well depending on how you like today maybe we can do things like this more often!
Me: Well so far I (censored) hate it. 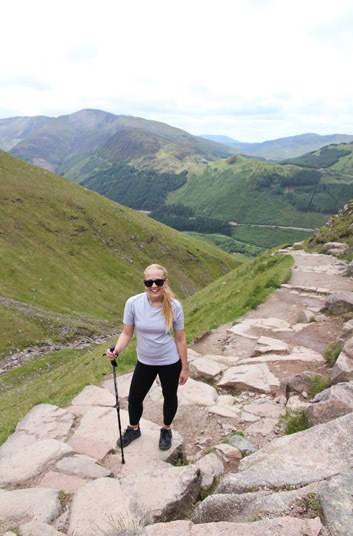 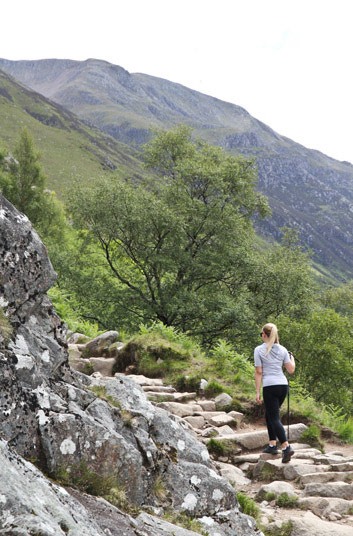 The first hour of the hike is, upon reflection, the worst. I don’t know if it’s the steep rocky path or the fact that my body was being shocked by this rush of physical exertion, but I actually started to doubt if I would make it to the top. After an hour we stopped for a break and I was able to soak in for the first time the fantastic views. And we were lucky; most days of the year it is either raining or overcast. We changed our hiking day in order to end up with the best weather and it was definitely worth it, I don’t think I could have made it all the way up without the reward of looking around and seeing panoramas like this:

There is some variety in the landscapes but most of hours two and three were slightly monotonous as I focused on gulping for air and trying not to hunch over when my back started aching. I began wondering how my life plan had altered so greatly. A few years ago I would have thought that my summer after graduation I’d by sipping martinis in a New York City bar with my girlfriends, Sex and the City style. Yet here I was, slogging my way up a mountain. WHERE DID THINGS GO SO WRONG? As I gasped to Mark when he asked how I was holding up: Mother nature, you son of a bitch.

Eventually I did start to hit my stride a little. Whether it was hiker’s high, the realization we were three quarters to the top, or the chocolate muffins Mark was dangling in front of me, I finally started to walk with a little more pep in my step. 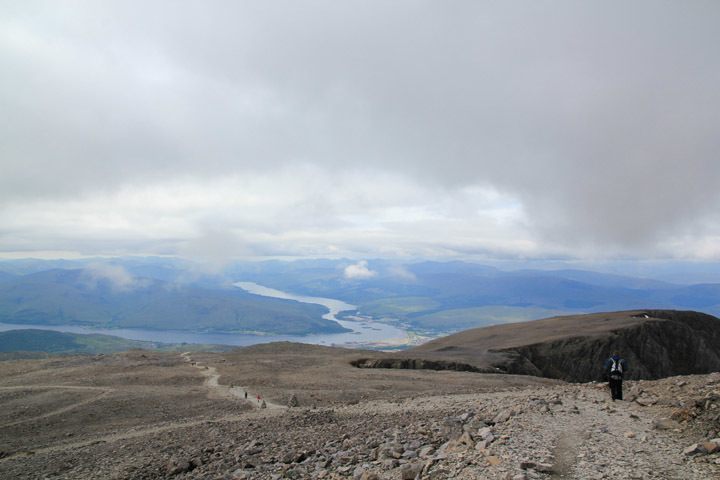 With an hour left to the top the path did change drastically and we began to walk into the clouds. I felt a bit like I was walking on the moon, surrounded by rocks and white skies. Other hikers coming down the  mountain were smiling and talking of the summit, which lifted my spirits. I couldn’t believe how close we were! We had seen patches of snow here and there off to the side of the trail but eventually there was no way around it. So I found myself hiking through snow in the middle of June. It was quite a sight. 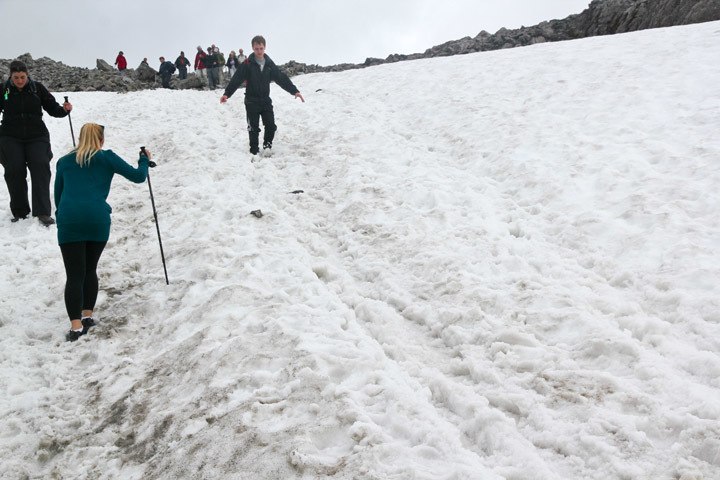 With the thick clouds hanging around us, it was impossible to see very far ahead or to tell how close we were to the summit. Suddenly passed over a lip in the path and there we were, the highest point in Great Britain! I could barely believe it when we checked the time and had made the ascent in three and a half hours. Take that, reasonably fit Lonely Planet readers! 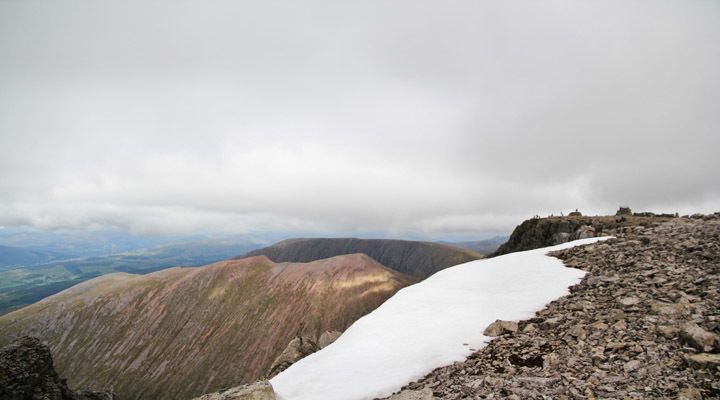 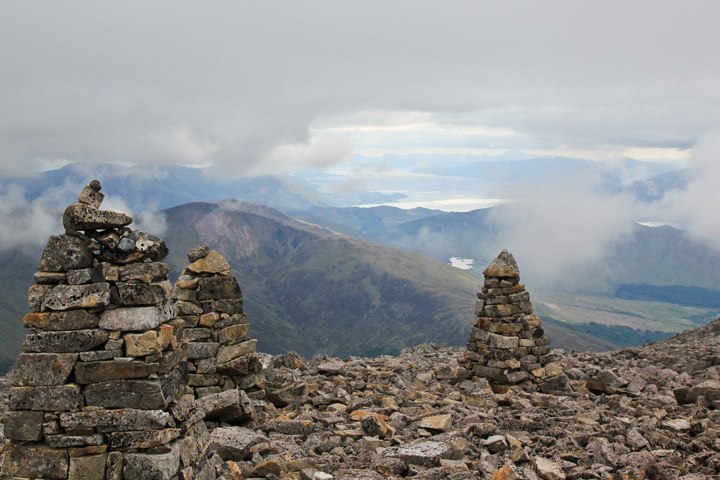 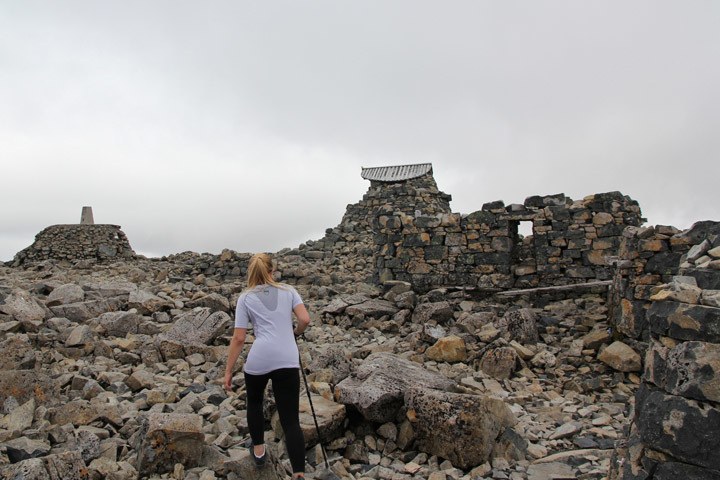 We came prepared to celebrate with our party favor from our recent Scottish wedding. I’m not usually a whiskey drinker but you know what they say: When in Scotland, drink as the Scottish do. 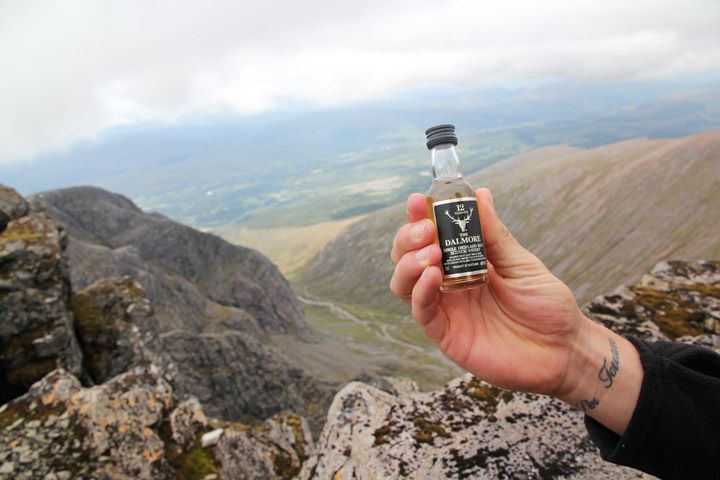 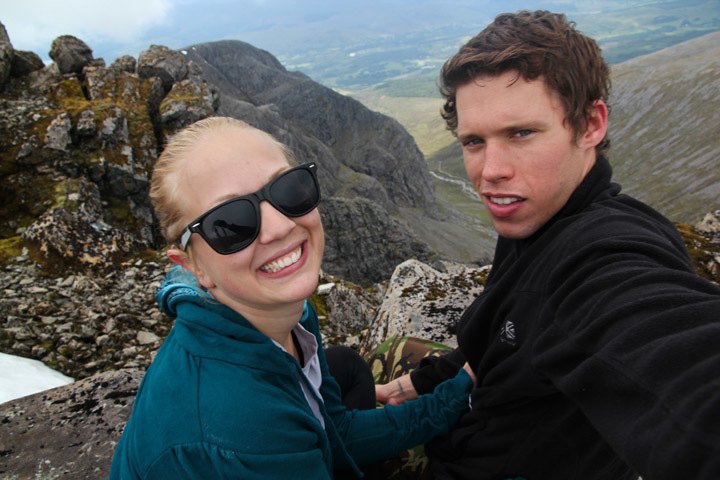 Internet, I think now that we’ve gotten to know each other a little better, I can start showing you some less flattering photos of myself. I mean, you already know what a picky eater I am and how I used to think sharks were going to eat me in my swimming pool, so what’s a few highland cow hat photos between friends? 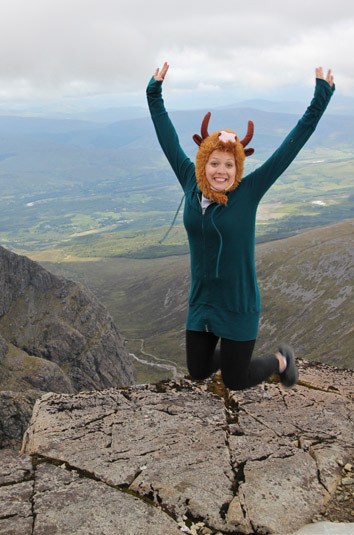 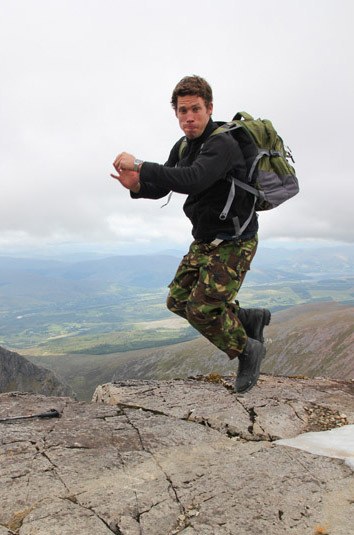 Don’t worry. I brought my Ray Bans to look cooler. 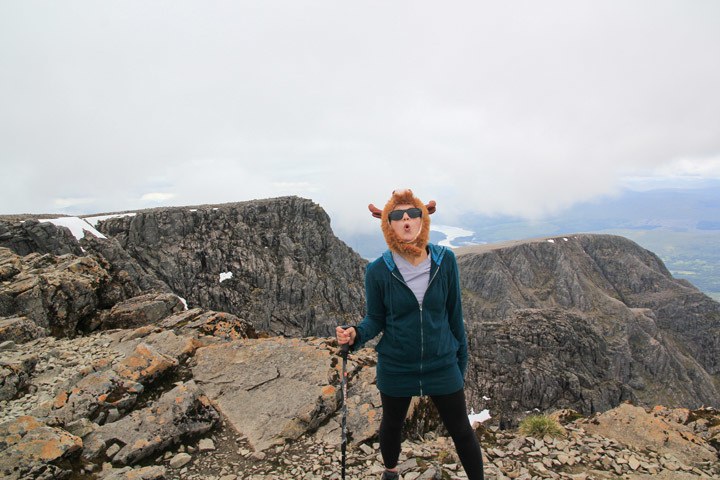 When we had had our fill of being the highest people in the United Kingdom, we began our descent. Surprisingly my feet and knees hadn’t really been bothering me up until this point but each step started to wear on them a little more. 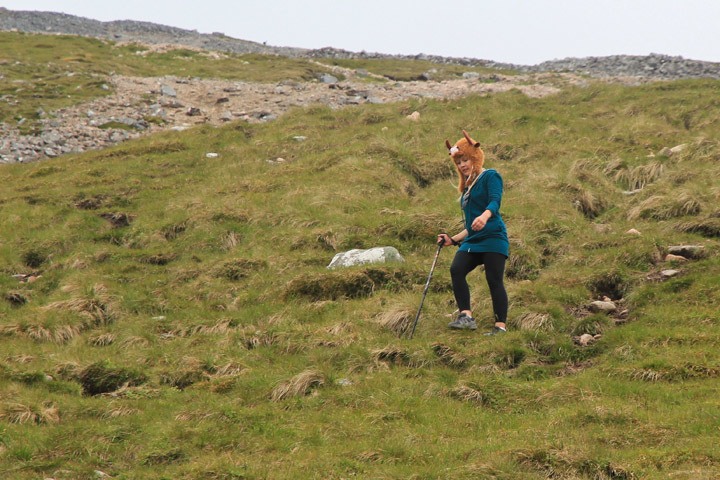 I remarked a few times how much longer the path seemed on the way down. Had we really gone this far on the way up? I nearly flagged down the rescue helicopter we saw going by. 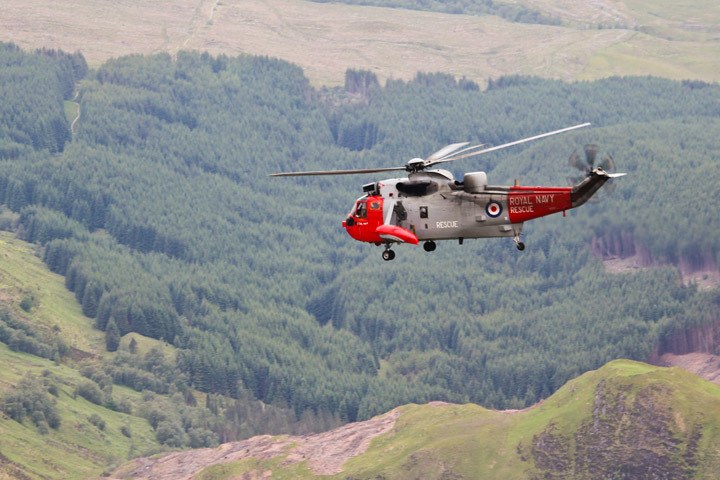 A surprisingly long two hours later we were back on flat land. I still can’t quite believe that I made it to the summit, and moved my body for six continuous hours, whiny and lazy and I have a tendency to be. I think sometimes I sell myself short and don’t remember how far I am capable of pushing my body, and I need to remind myself a little more often! I’m happy to say that I made it to the top, that Mark and I did it together, and that I saw this beautiful part of Scotland. Mother nature, I take back what I said. Mostly. 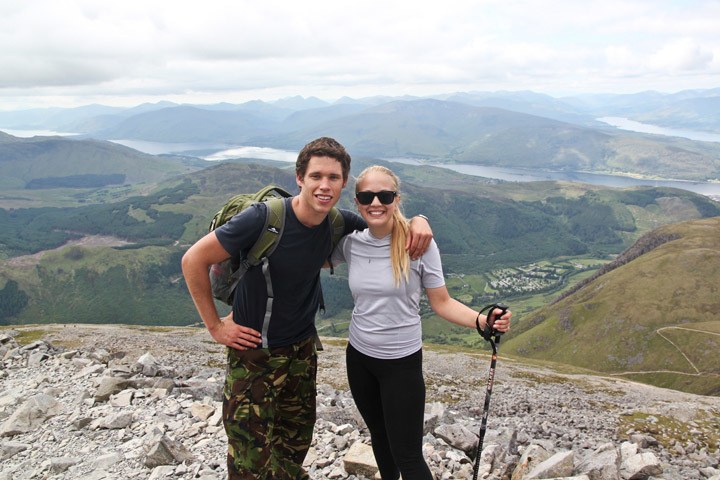 I’ll leave you with some of Mark’s (and a few of my own) tips for hiking Ben Nevis:

1. Pack a lot of water, some small snacks (chew thoroughly to avoid cramps) and something to celebrate with at the summit!
2. Check the weather. It is worth rearranging plans to make it on the clearest day possible.
3. Bring band aids and advil. I had some pretty bad lower back pain halfway up that would have been solved quite easily with a painkiller.
4. Believe you can do it!

To see the full set of our photos, head to my Ben Nevis Flickr Set here.

Photo Of The Week 2 My First Eleven Foreign Countries
24 Comments...