The Colca Canyon: A Comedy of Hangovers

I’ve had this feeling I just can’t shake since I arrived in Peru, this feeling that I’m playing it too safe. I’ve followed the Gringo Trail with almost laser-like precision, and checked off all the appropriate boxes: Inca Trail to Machu Picchu, check; wore ridiculous outfit on Lake Titicaca, check; complained about Lima weather, check.

I’d been longing for some Motorcycle Diaries-style, what was she thinking kind of reckless adventures. So when I arrived in Arequipa with my eye on the Colca Canyon, I knew I couldn’t just sign up for a group tour and spend another few days having my hand held. I was going to hike the Colca Canyon independently. 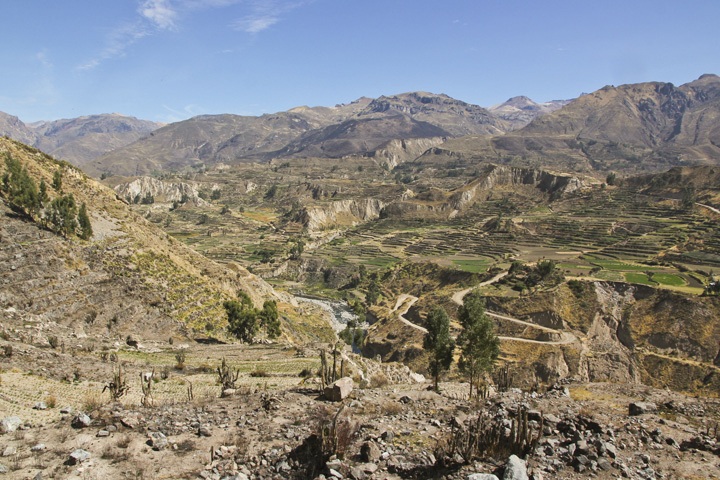 Okay, not totally independently. That’s just crazy talk. So while I was partying away my days in Arequipa, I was also running a full-time recon mission looking for potential hiking partners. The requirements were quite strict: they had to say yes. Also, they had to wear deodorant. Because: hygiene.

I’ve been told I can be quite convincing (you remember that my family’s childhood nickname for me was The Bulldozer, right?) yet the night before my intended departure I had nothing arranged. I had been to the tourist office in Arequipa and been handed a crude map, a few half-hearted suggestions and a bored assurance that the trail was very well-marked, but I had no one committed to trekking with me. However, around midnight things took a turn and three of my new friends from the hostel and I toasted to leaving the next afternoon. Alcohol may have been involved. 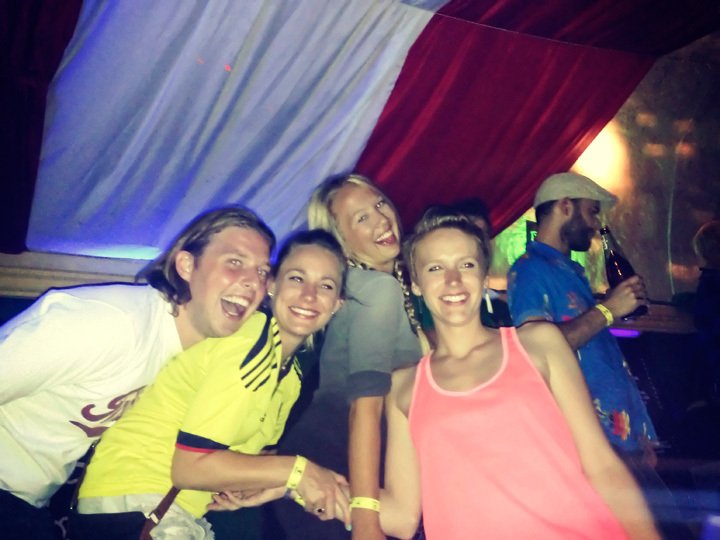 The next morning was a bit of a blur as I tried to pack a day pack, check out, put my other belongings in storage, feed myself, and Google if there has been any progress in the scientific journey towards a cure for hangovers. I was amazed when I showed up in reception at our designated meeting time of 1:00pm to find Leah, Gus, and Dave all waiting there doing decent impressions of functional adults. There was also a new addition to the crew, a French girl who snarled at me and seemed unable to comprehend why we could not have taken the 9:00am bus. The more the merrier!

We made it to the bus station with moments to spare before the 2:00pm bus to Cabanaconde took off — seriously, we boarded just as it started rumbling to life. This upset Frenchie.

Now, there are bus rides, and there are bus rides. This was one of the latter. A baby screamed at volumes that I assumed must be breaking the barriers of human register, the bus obviously had never heard of a suspension, and the man sitting next to me was clearly under the impression that I had actually only purchased 3/4ths of a seat. It was a six-hour ride. One hour in I started praying to slip into a temporary coma. Three hours in, when the bus stopped at a town called Chivay, I looked at Gus, Leah and Dave and together we wordlessly bolted. Frenchie shook her head at us and stayed put. It was a sad goodbye. 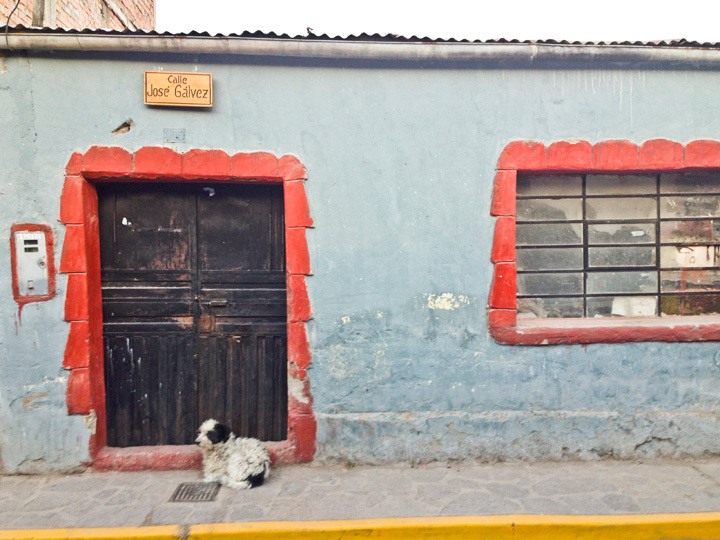 No problem, we assured ourselves! We’ll just spend the night here, recover in Chivay’s hot springs, and catch the first bus to Cabanaconde the next morning. Not so fast — the hot springs we already closed for the night. Alright then. We found a decent hostal room and an insanely cheap set menú restaurant for dinner and set our alarms for 4:30 the next morning, in order to catch the 5:30am bus to Cabanaconde — our host assured us of its existence!

We trudged our way in the pre-dawn darkness back to the bus station, where we were met with… a closed ticket desk. A woman at the tourist information booth shook her head, and assured us that the buses leave at 5:00am and 7:30am every morning. This confused us, as signs around the bus station assured us that buses left at 4:30am every morning. Regardless, we had missed the first bus out, and were stranded in Chivay for another two hours. It would delay our hike, but hey — we now had the chance to correct our fail from the night before! We stuffed into a cab to the hot springs and spent the next two hours laughing about the insane day of hiking ahead of us. 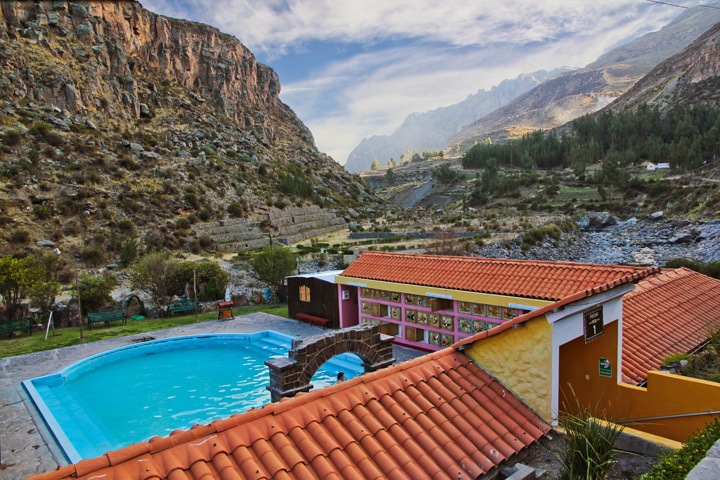 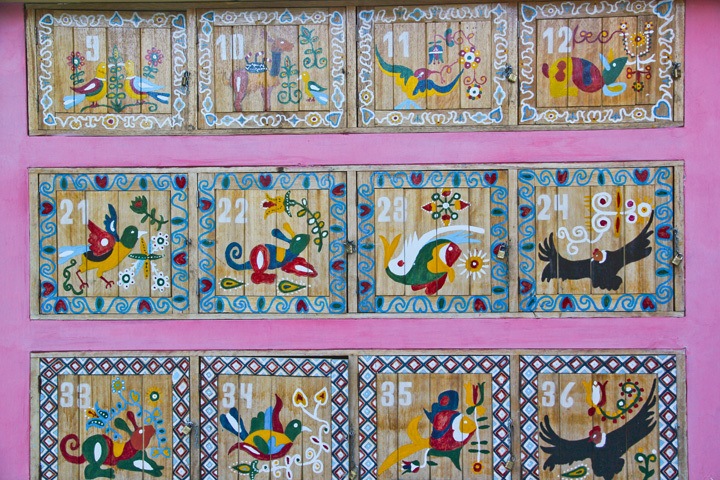 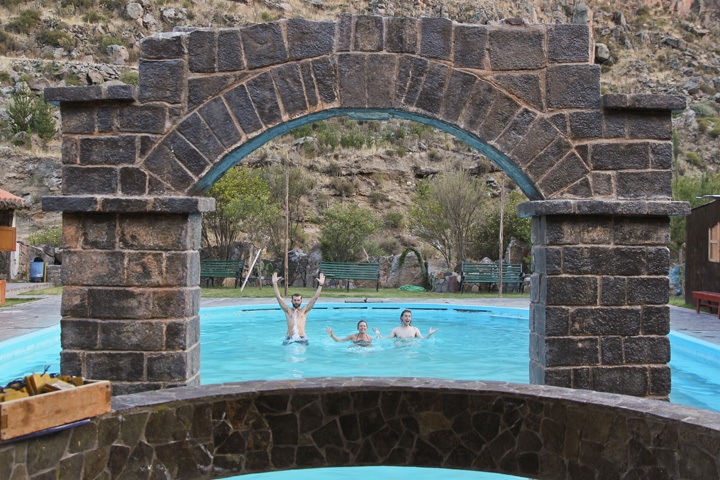 When we returned to the bus station well in advance of our 7:30am bus, we were met with more fantastic news: the bus was delayed by an hour. At this point, we were pushing it with completing the hiking we needed to finish by nightfall — and we weren’t even at the starting line. Ten minutes later, we were informed the bus was cancelled.

At this point we discussed scrapping the whole thing and trying again the next morning. But I was on pretty tight time and that would risk me missing my night bus to Cusco two days later. So when a cab driver offered to drive us the whole day for the decent sum of 25 soles each (about $9US), we accepted… though the bus would have been a more attractive 5 soles. The upside to taking a cab rather than the bus was the driver promised to stop at the Mirador Cruz del Condor, a condor viewpoint between the two cities, which we sadly thought we’d have had to miss out on. He also very kindly stopped a few times along the way so we could take pictures. At one point, the car slammed on the breaks to avoid hitting a wild fox that scampered out ahead of us. 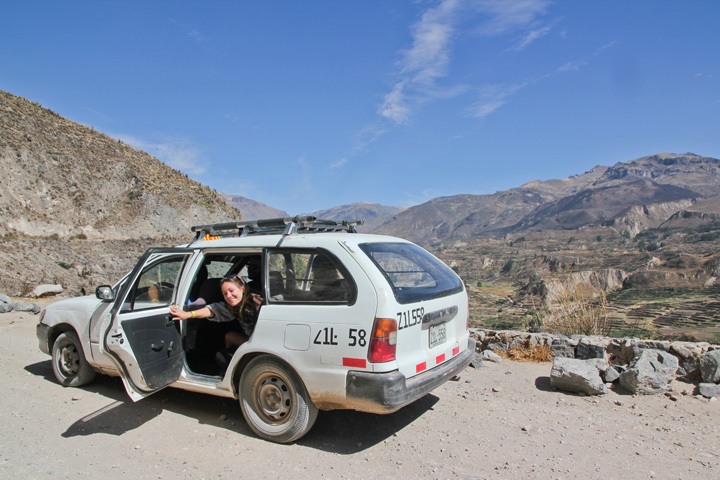 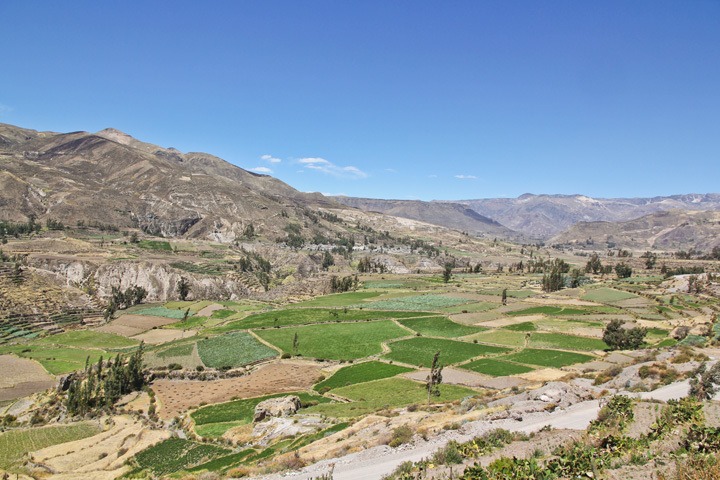 At the Mirador, I was shocked to find about a billion people… and no birds. I wandered around a bit, making a mental note to research second-day hangovers, and we were about to return to the cab when we heard a collective ahhhh! coming from the crowd. A single condor emerged from the depths of the canyon and soared above us, majestic enough to replace the dozens at a time that are often sighted here. 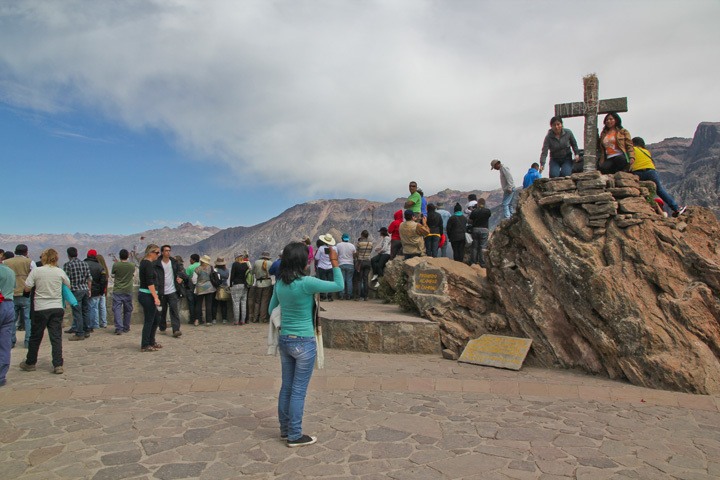 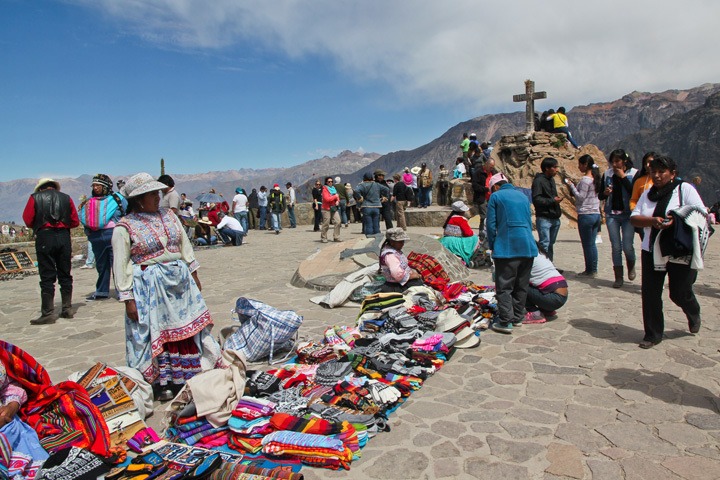 By the time we reached the dusty town of Cabanaconde, we were starving. We stopped for breakfast at the first place we could find signs of life in, and tried to get ourselves together for our next big move. Looking at the map from the tourist office, we added up the hiking time estimates and realized we had nine hours of hiking ahead of us, which would have us hiking in the dark. No thanks — we quickly eliminated the only optional leg of the route, shaving two hours off the hike time.

We made a pact to walk quickly. 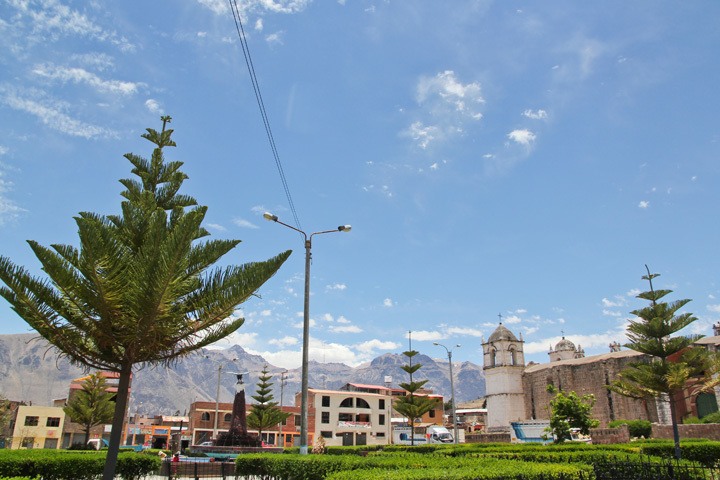 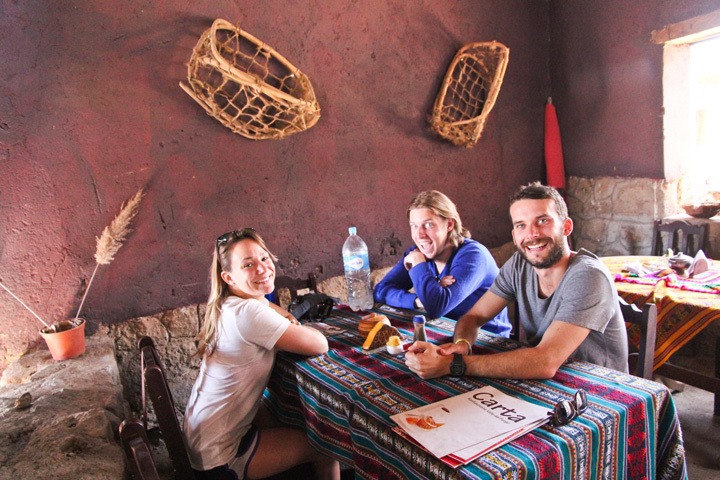 After triple checking the bus times back to Arequipa for the next day, we finally, finally set off at 11:30 from the town’s Plaza del Armas, a good four hours after intended. Now, here’s when things got wonky yet again. We had been assured that while the path wasn’t marked to the start of the hike, the locals would happily point us in the right direction! Yeah, not so much. Despite the fact that we had a fluent Spanish speaker in our group, locals seemed confused about what we were asking, where we wanted to go, and frankly, couldn’t come to much of a consensus on whether or not the Colca Canyon actually existed.

We wandered in the vague direction that the LOL-sy map we’d been given indicated, which actually took us back onto the road out of town.

Fail Five: Not researching the hike route better before departure. After several false starts — I shudder to think what would have happened had we followed one — we finally found the start of the trek. [Note: If you happen to be reading this post for advice (God help you), walk along the main road from Cabonaconde back towards Chivay for about a kilometer until you see the bizarre Frank Lloyd Wright-esque spiral witch lair. The start of the trail is just beyond that, on the same side of the road.] We whooped and cheered as we peered into the Canyon and followed with our eyes the entire route our feet would take over the next two days. With a self-timer assisted portrait for posterity out of the way, five fails in and several more to go, we began our descent.

Into the Deep in Mancora

Where to Eat in Mancora