Forgetting your passport. Missing your flight. Booking a hotel in the wrong city. These are major travel snafus that can seriously dent your wallet and detour your trip. But what about the little mistakes, like, say, booking the wrong horseback riding tour?

Because that’s what I did in Brazil. 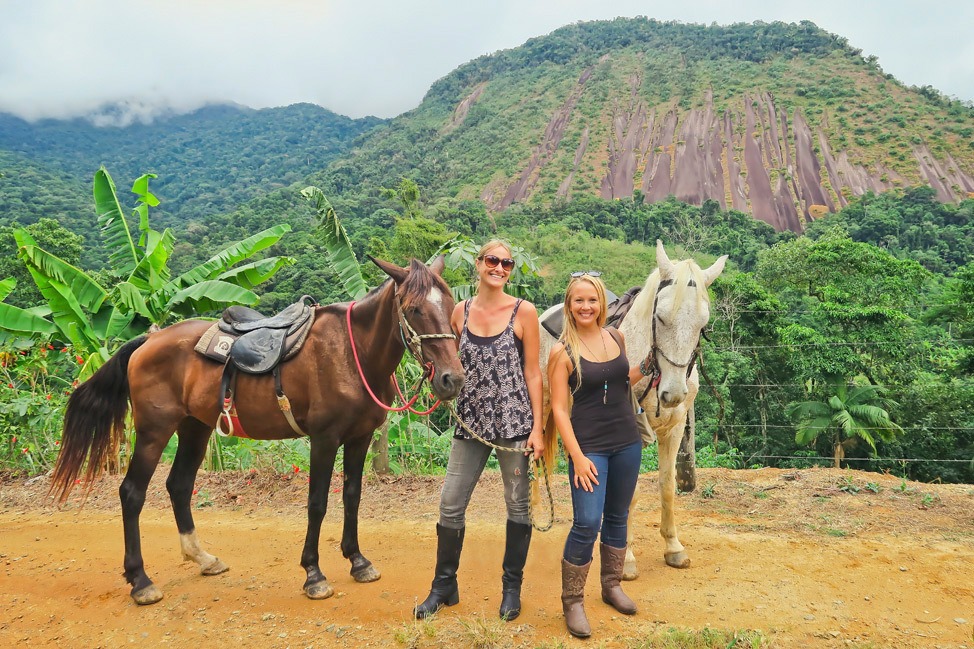 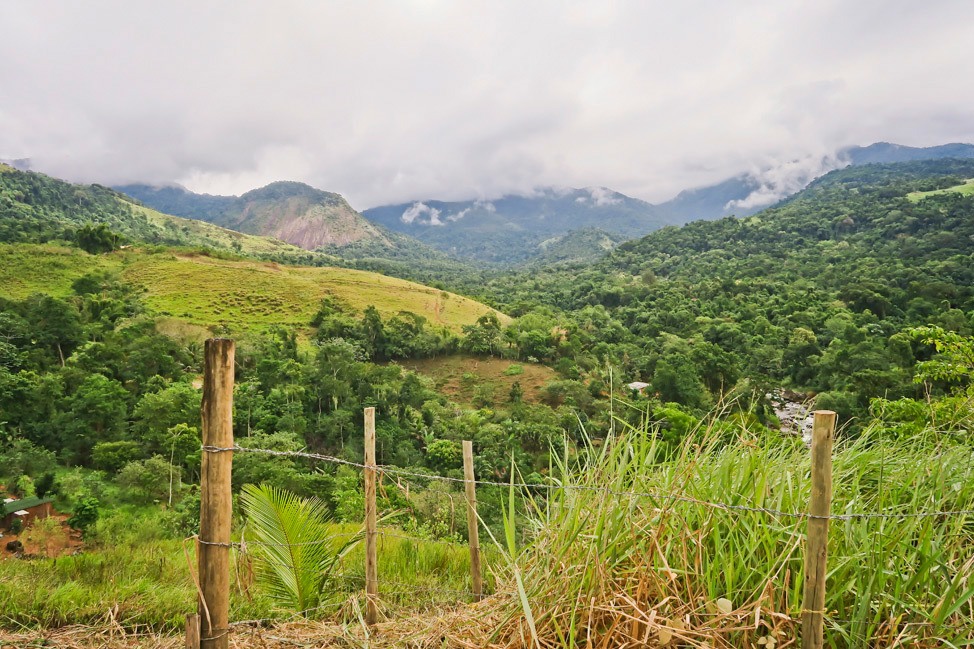 There is so much to do and see in Paraty, Heather and I had a hard time narrowing down our options when planning our trip. But when I read about a beautiful, meandering horseback riding tour with a passionate guide that included stops at a gushing waterfall and cachaça distillery, I knew it had to make the cut.

After an extremely rainy week in Paraty, I was thrilled when the morning of our tour brought only ominously cloudy skies, and no downpour. A driver picked us up and drove us to stables inland towards the mountains. He spoke no English, which we didn’t mind until we were handed off to our tour guide, Joao, who we had a similar struggle to communicate with. Well, at least we’d have some solitude, I thought, trying to look at the bright side. 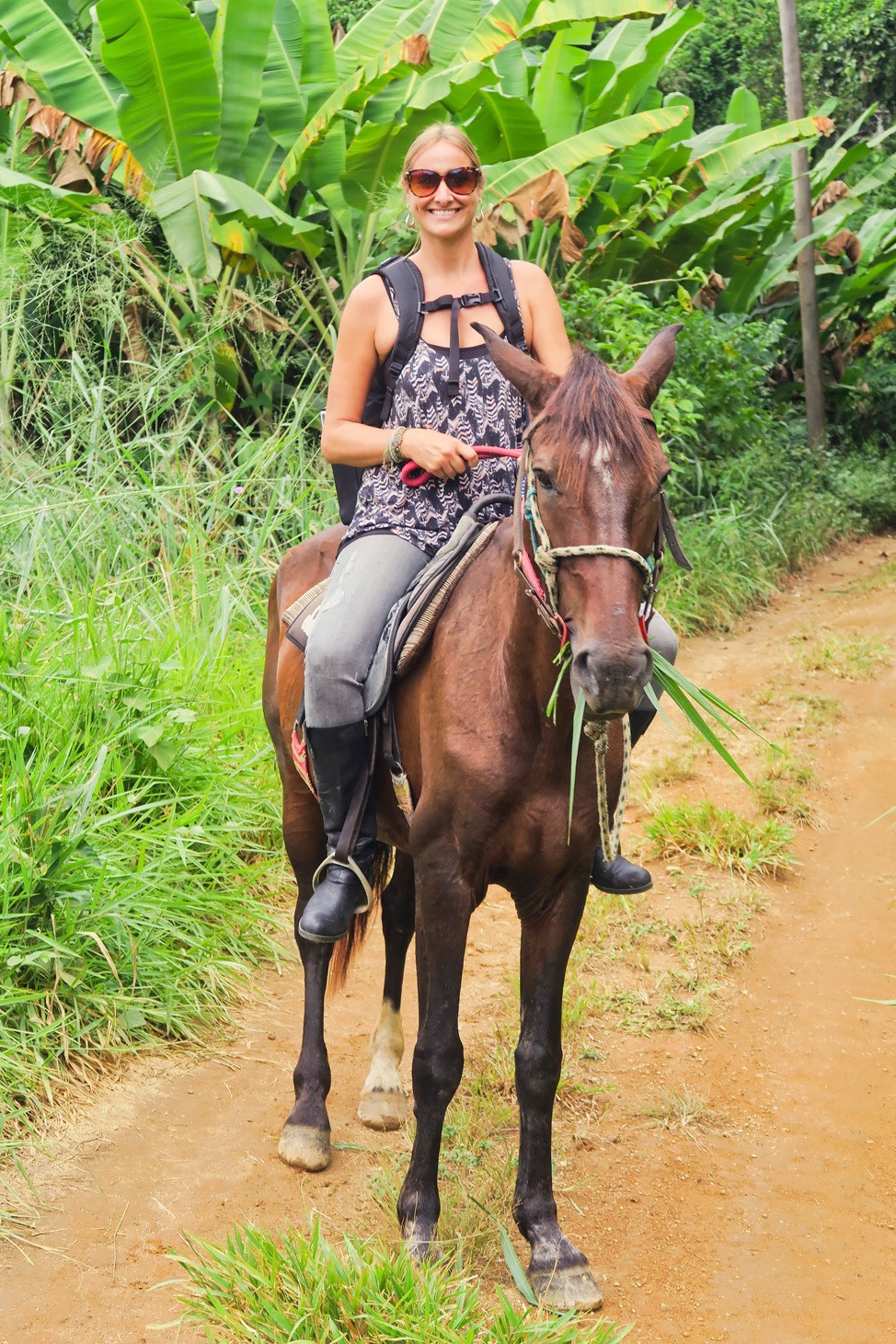 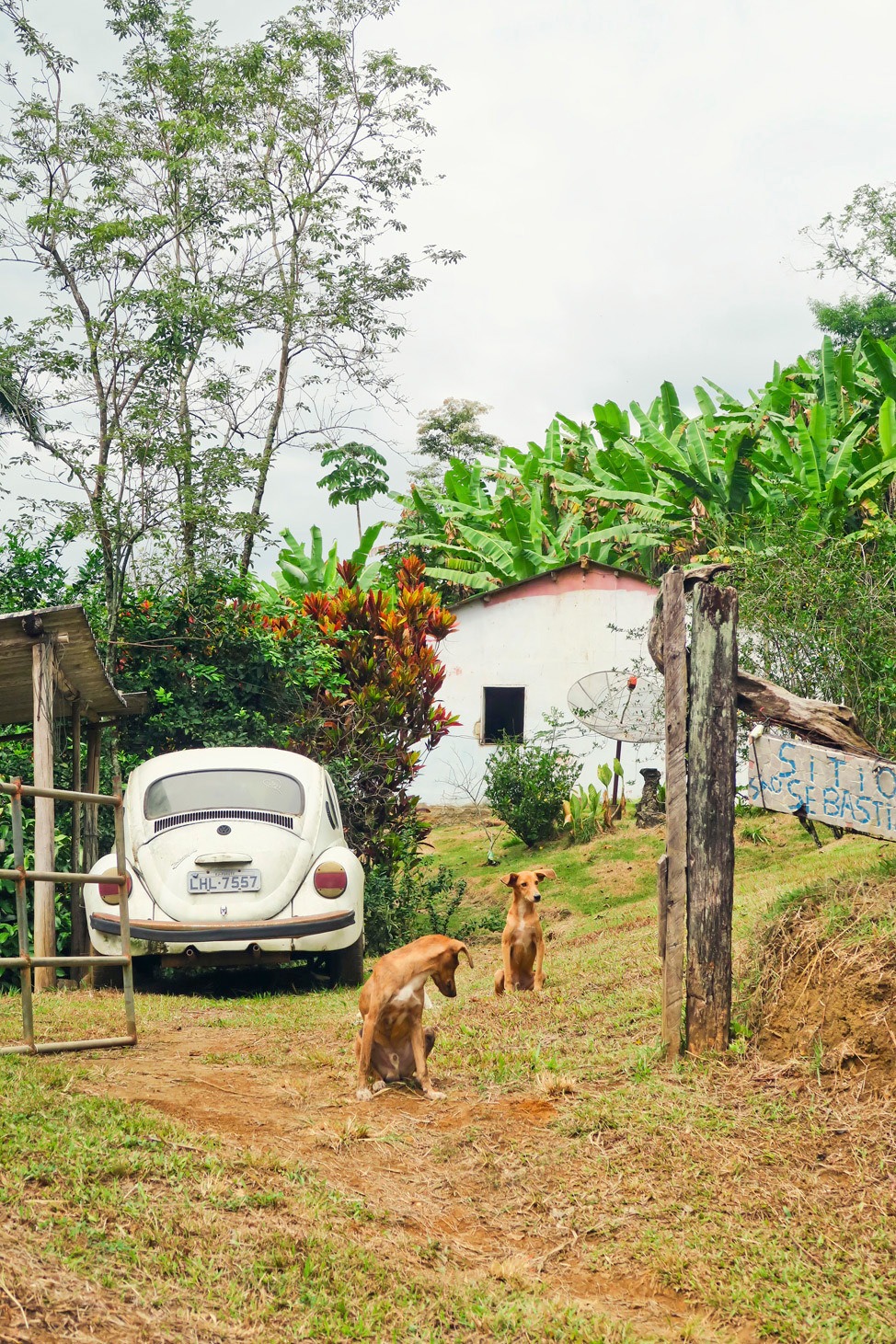 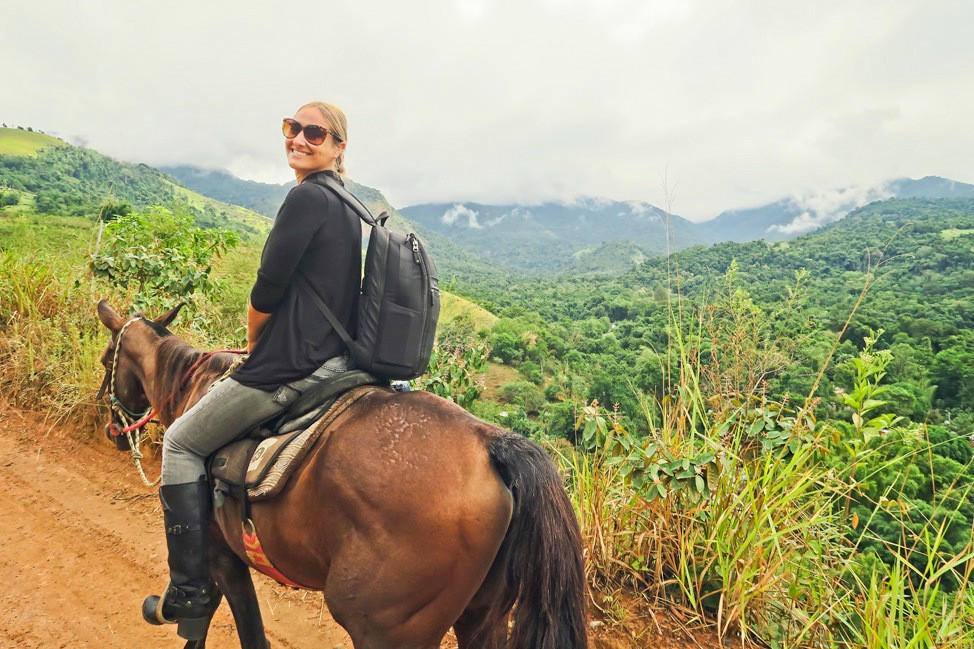 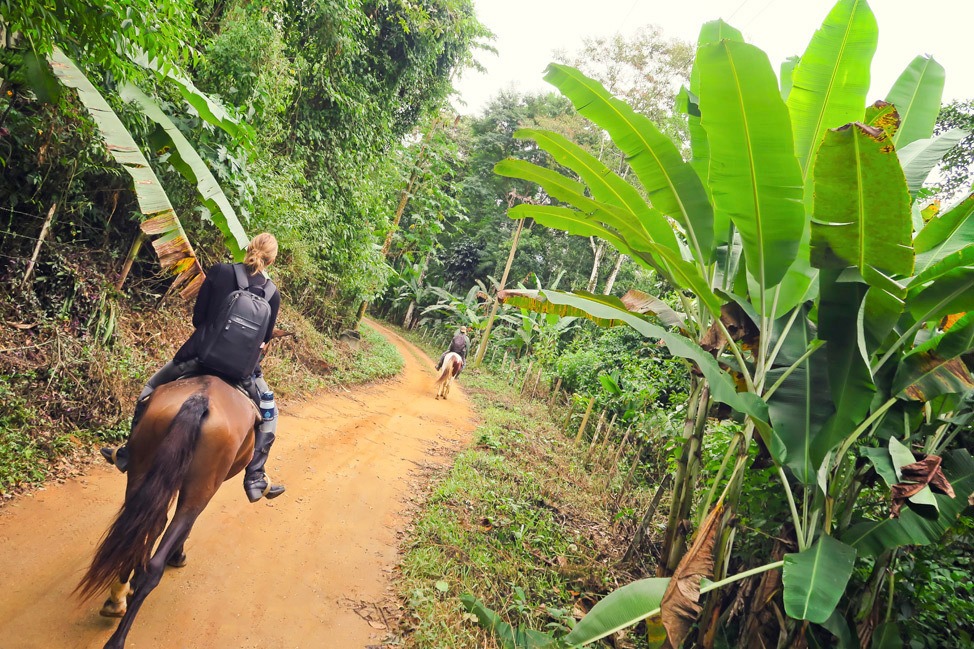 Joao matched us to horses and we were off into Brazil’s infamous Costa Verde. As we wound up a rural mountain path, we passed by farms that gave us a glimpse into life in rural Paraty. Later, we stopped at a stream to refill our water bottles and soak up the scenery.

Joao happily took our cameras and snapped a surprisingly great set of photos (not all tour guides are the best photographers, I’ve found — so it’s always exciting when you get a great one.) 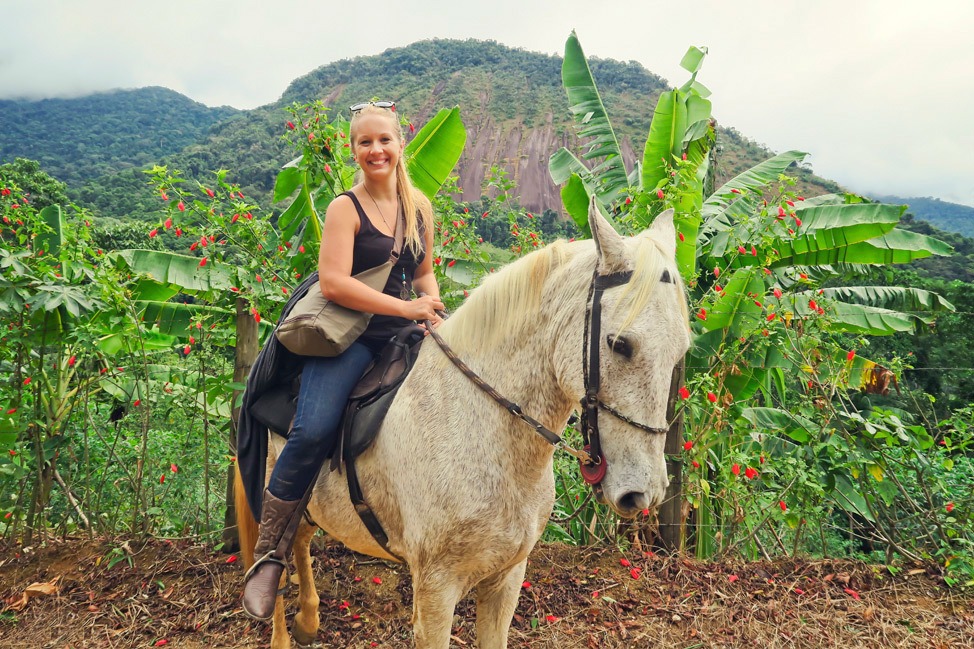 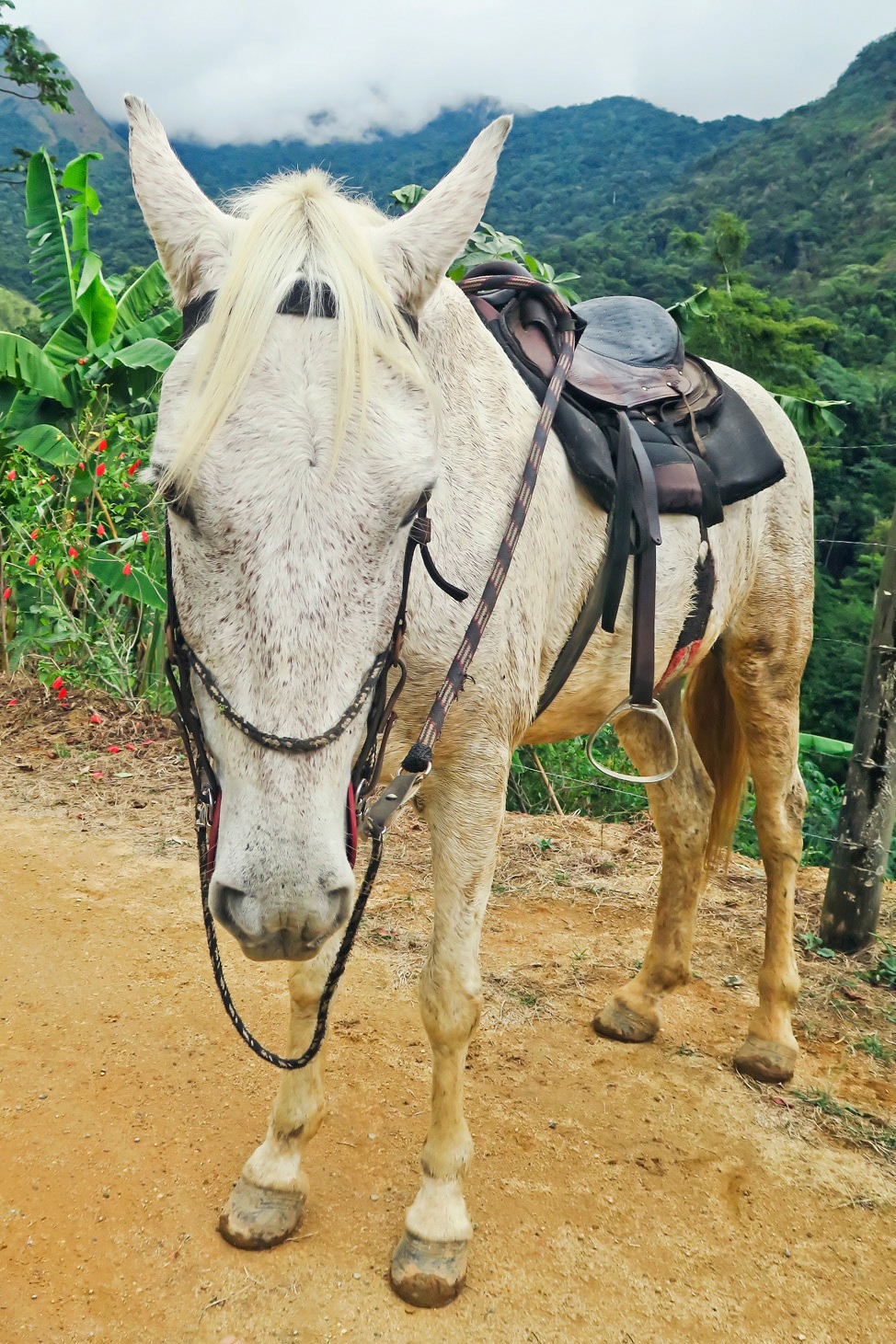 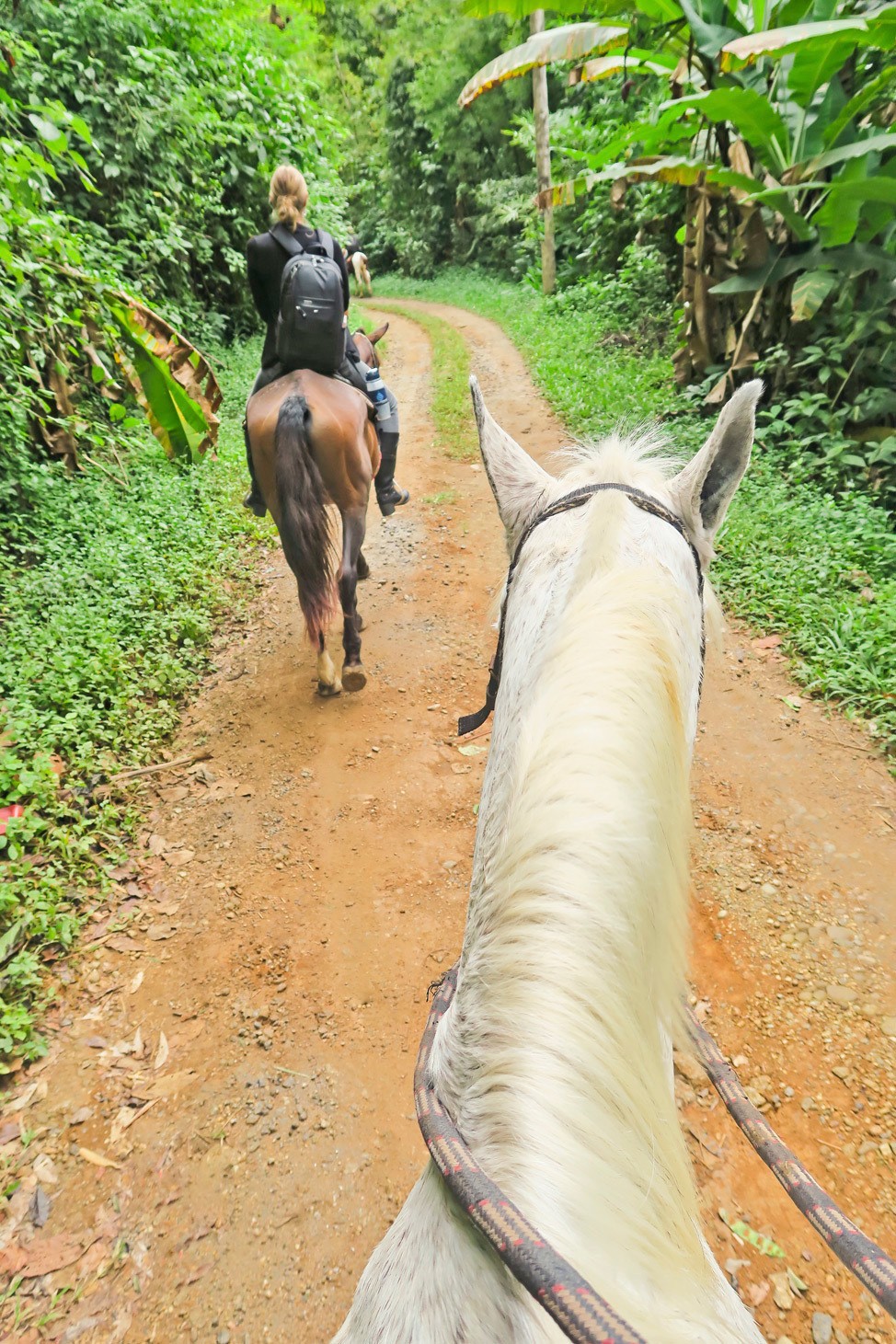 However, it was not long after that I started to sense something was off. After snapping the photos, we turned around and started to return the way we’d come. Wait, what about the waterfalls and the rum? My attempts to ask Joao what was up went nowhere, though he did indicate some sort of waterfall ahead.

Still, I had a sinking feeling I couldn’t ignore — I had booked the wrong tour. There were no rum distilleries or stunning waterfalls ahead. I’d wasted three of our only hours without rain on a trail trot up and down a hill. 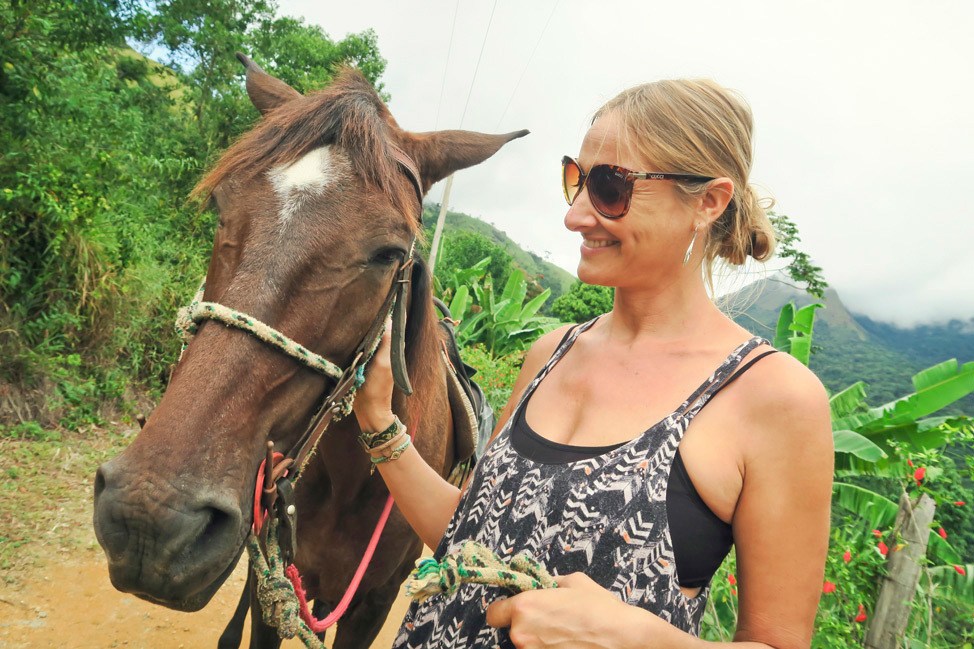 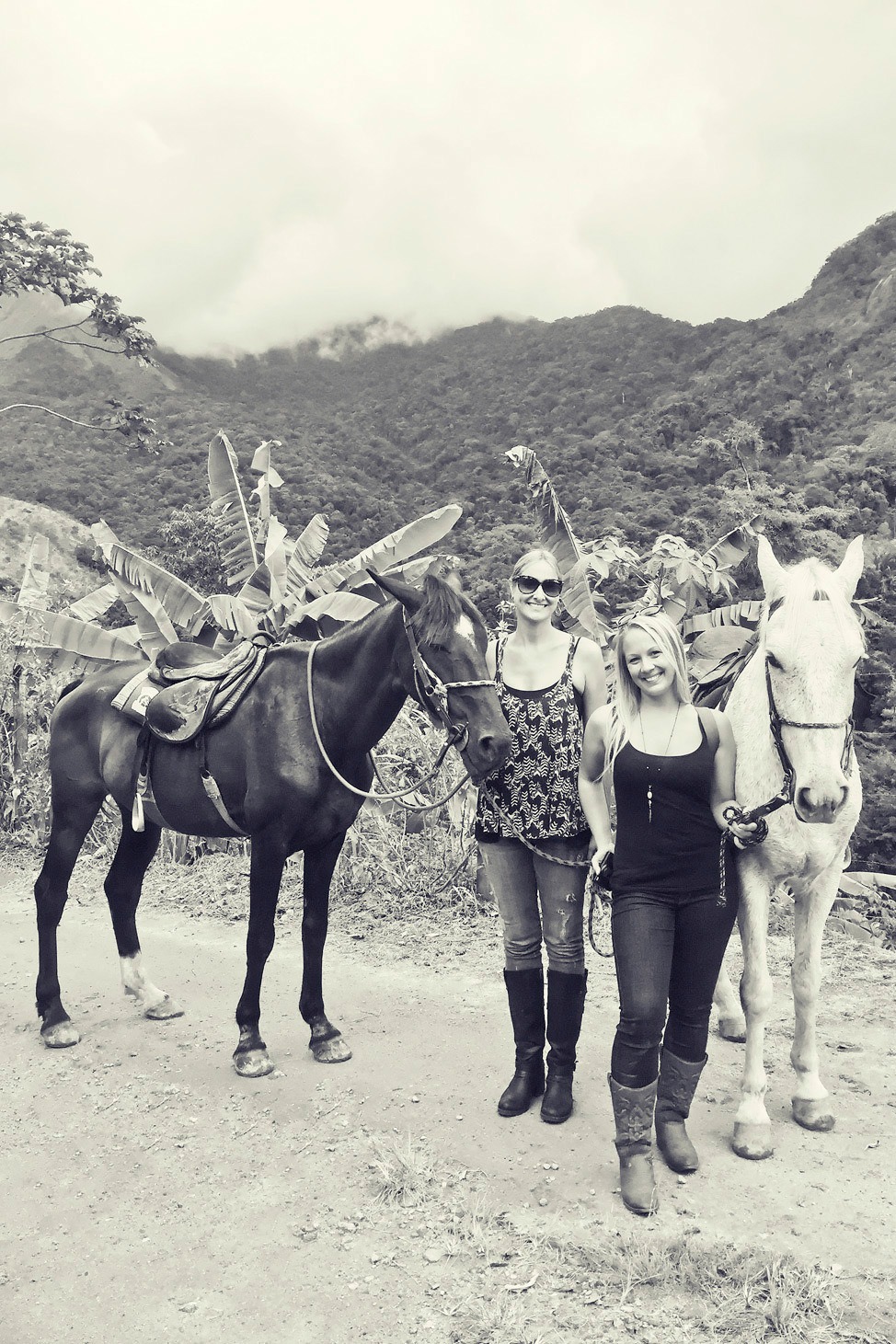 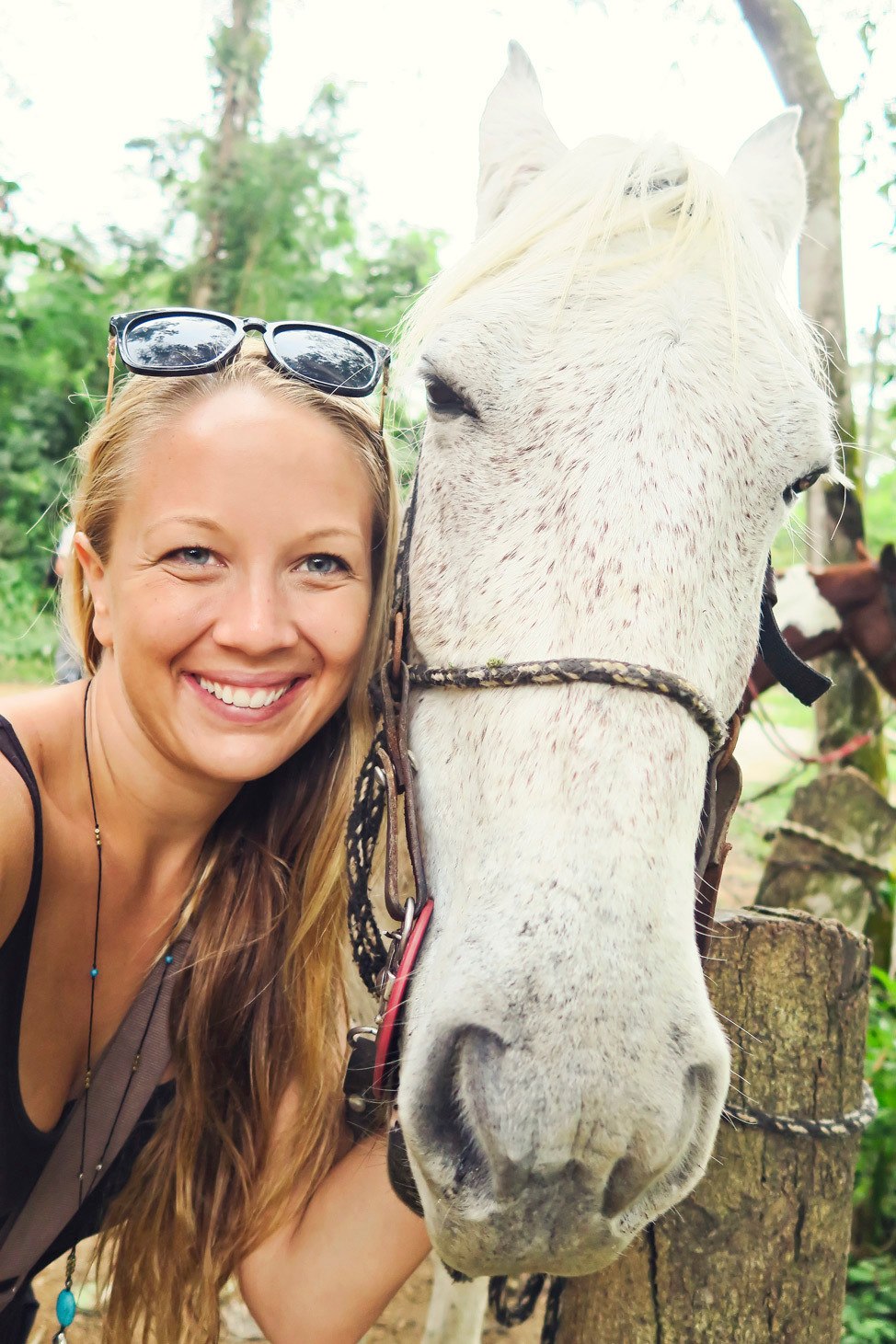 Eventually, we did stop at a “waterfall” — which was kind of a hilariously dried-up stream considering it had been torrentially downpouring for days. Again, we did try to make the best of it with a silly photoshoot by the stream. 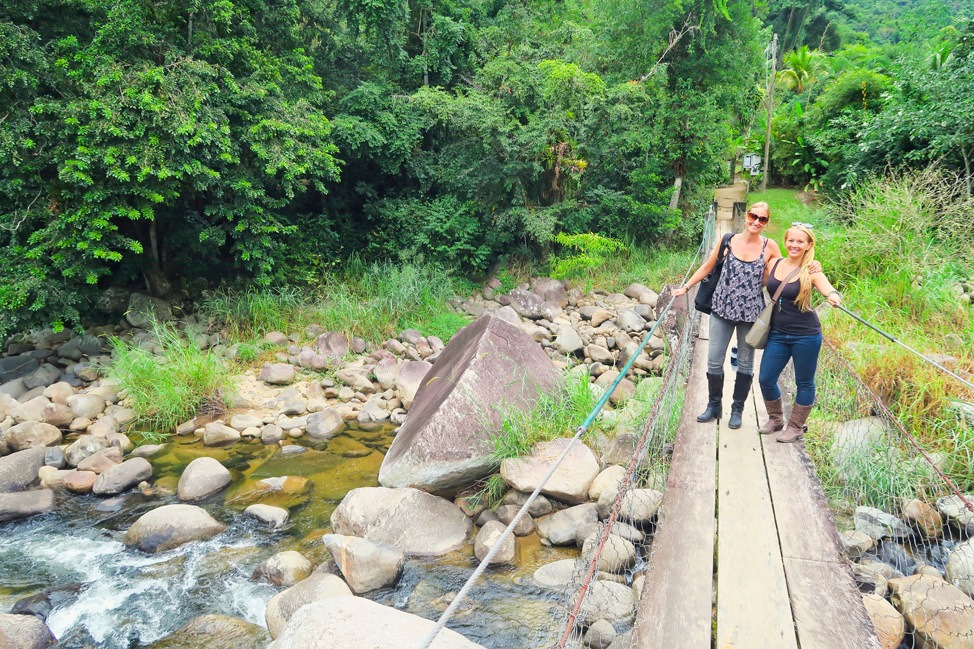 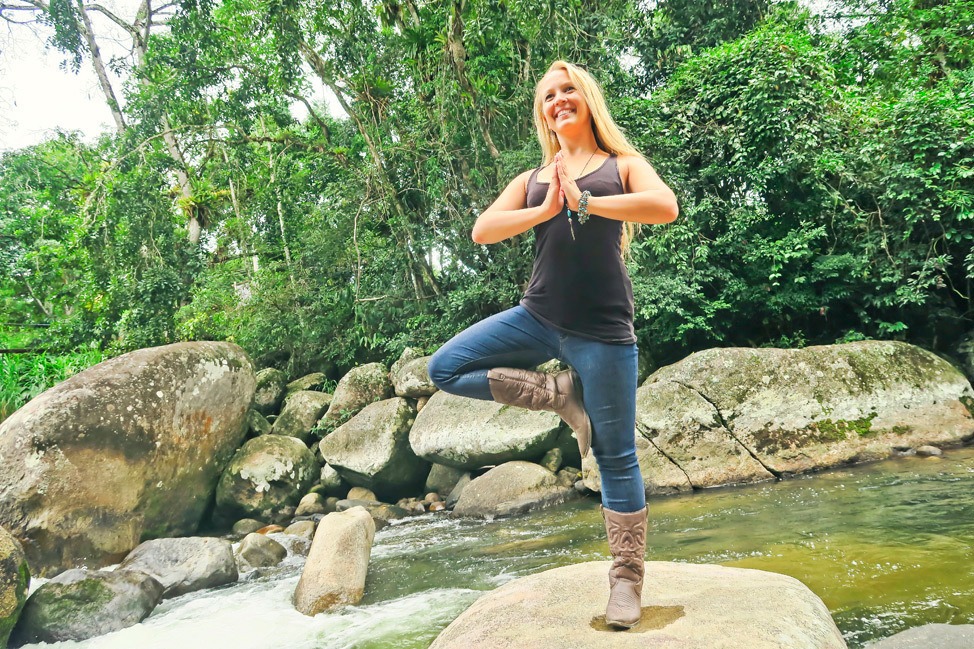 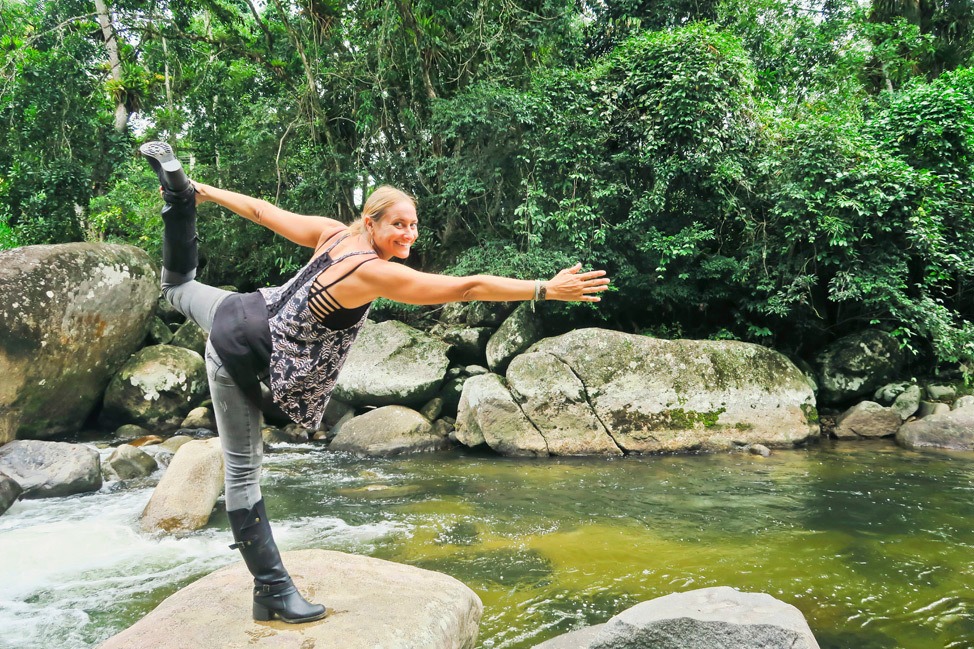 Based on our experience, I really can’t recommend the horseback riding tour we took — the first time I’ve ever been truly disappointed by a tour booked through Viator. What I wish we’d booked instead was the extremely well-reviewed tour by local horse enthusiast Raul.

Was it a trip ruining blunder? No. But considering how many little frustrations we’d had build up on the trip, I definitely beat myself up for piling yet another one on that I had no one to blame but myself for.

As we rode back into town many of the local kids ran up to pet the horses and greet Joao who was clearly a beloved figure in the community. While one of my Instagram followers raised concern for the welfare of the horses later when I posted a photo (which I’m glad they raised my awareness on), those issues clearly weren’t caused out of malice or neglect, but likely lack of resources.

Horseback riding in Paraty is a great activity for a less than beachy day — just make sure you book the right one. I know I’ve had enough great experiences to know the difference. 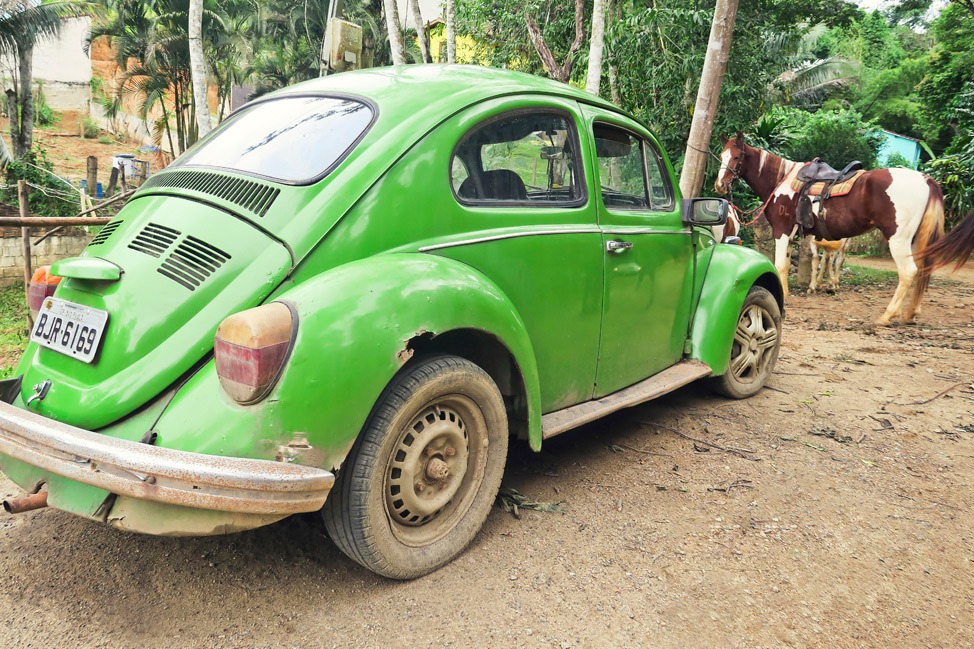 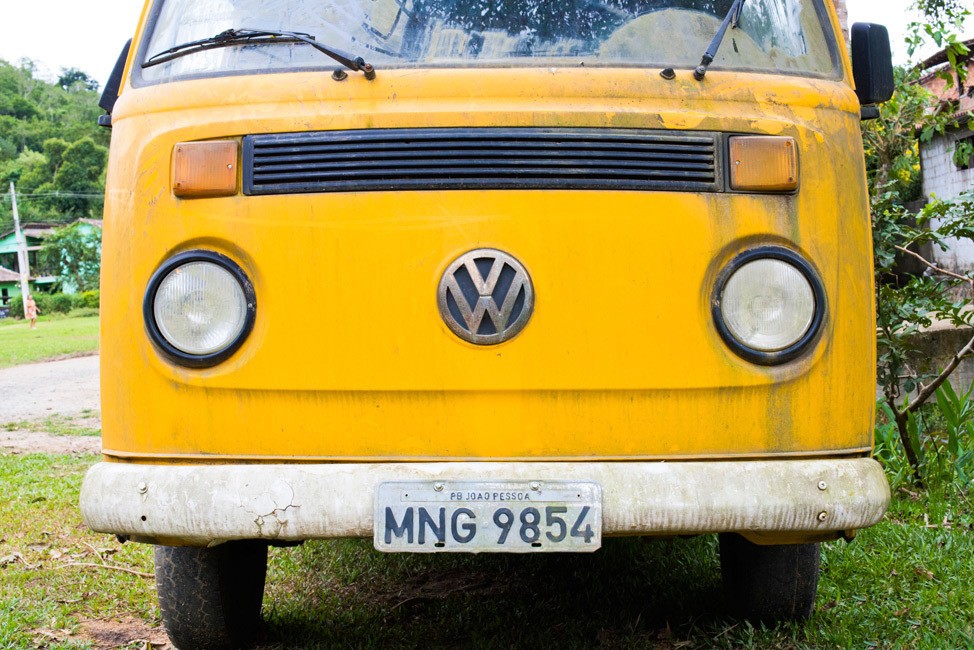 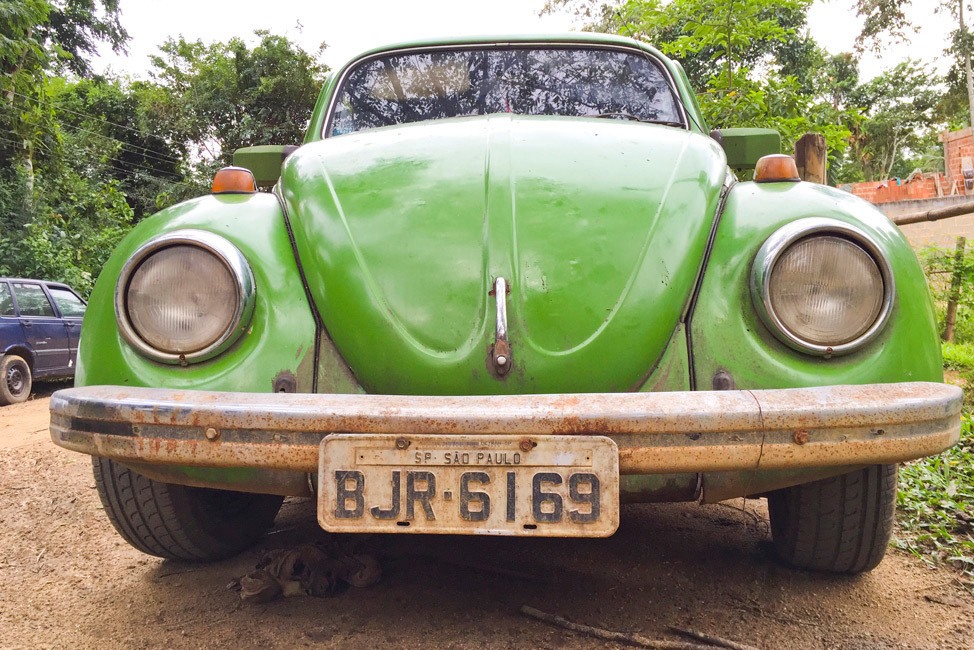 Have you ever accidentally booked the wrong experience and been disappointed?

I am a member of the Viator Ambassador initiative and participated in this tour as part of that program. Clearly, all thoughts and opinions are my own.

The Magic of The Finger Lakes in The Fall

Glamping Among The Elephants: A Journey to Khao Sok

A Brazilian Pearl: Where to Eat, Stay and Play in Paraty Nitrox Now! A Review of the PADI Enriched Air Diver Course
0 Comments...