After three days in Hua Hin, Ian and I’s relaxation retreat was almost complete. We’d ticked almost every box: sun, sand, sea, and sleep. There was just one last unwinding agent to attend to: wine.

So far, our explorations of Thailand’s unknown wine country had been a wild success. Two days in the Khao Yai district had revealed three beautiful vineyards — the boutique, female-helmed GranMonte Wines, local powerhouse PB Valley, and family-run, organic Alcidini. Now, in a totally different region of the country, we had one more chenin blanc to cheers to at Hua Hin Hills, the southernmost vineyard in Thailand. 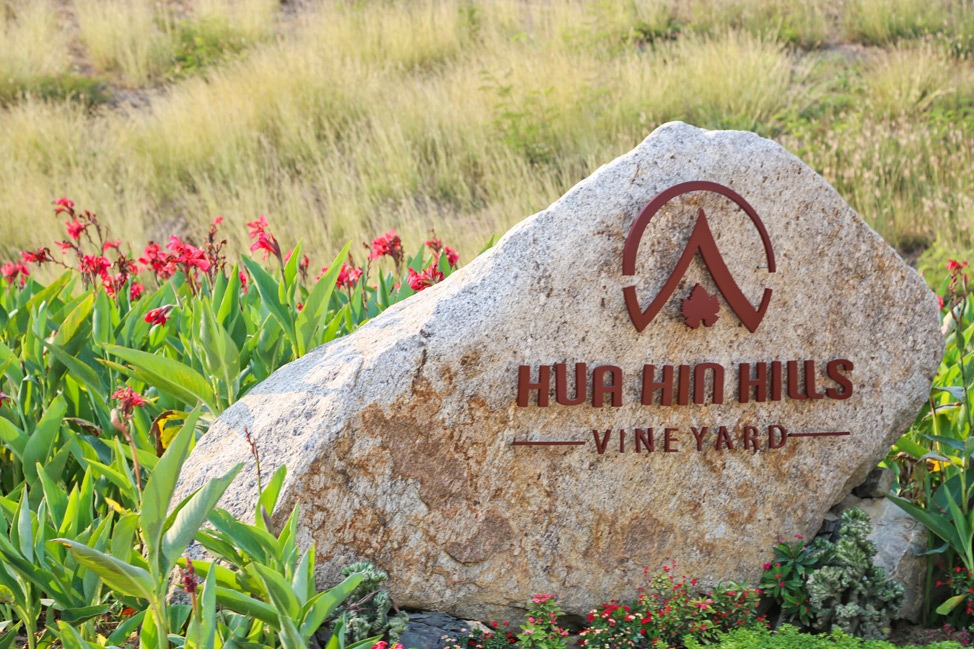 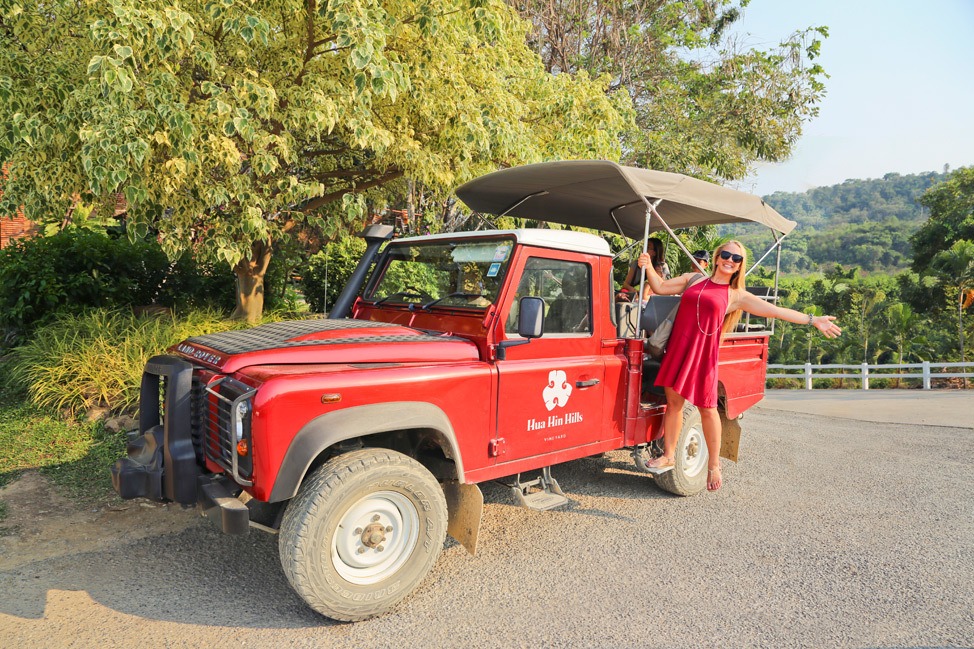 About 45 kilometers inland from coastal Hua Hin, the vineyard is picturesquely set among rolling jungle hills dotted with temples. We arrived just in time for the latter of two free tours offered per day, at 1pm and 4pm. The tour was short and sweet and conducted from the back of a bright red, branded, open-air jeep. Had this not been our fourth winery in a week I might have been a little bummed we didn’t stop once for pictures, but as it was I’d had my annual fill of photographing grape vines.

There are other activities on offer to allow you to explore the vineyard a bit more thoroughly. Mountain bikes can be rented for 100B for thirty minutes, or 150B for an hour, and in retrospect would have been a lovely way to explore — yet we were too hungry pre-tasting, and too tipsy post. For the creatives at heart, bottle painting is on offer for 300B per set. Elephant riding is also available, but as romantic as it may seem to cross a vineyard atop Thailand’s national animal, I personally recommend you don’t for all the reasons detailed here.

One important detail to keep in mind is that Hua Hin Hills consists only of a vineyard, not a winery. The production facility, Siam Winery, is located in Samut Sakhon, about two and a quarter hours back towards Bangkok. Someday, I look forward to visiting the winery and taking one of their tours as well! 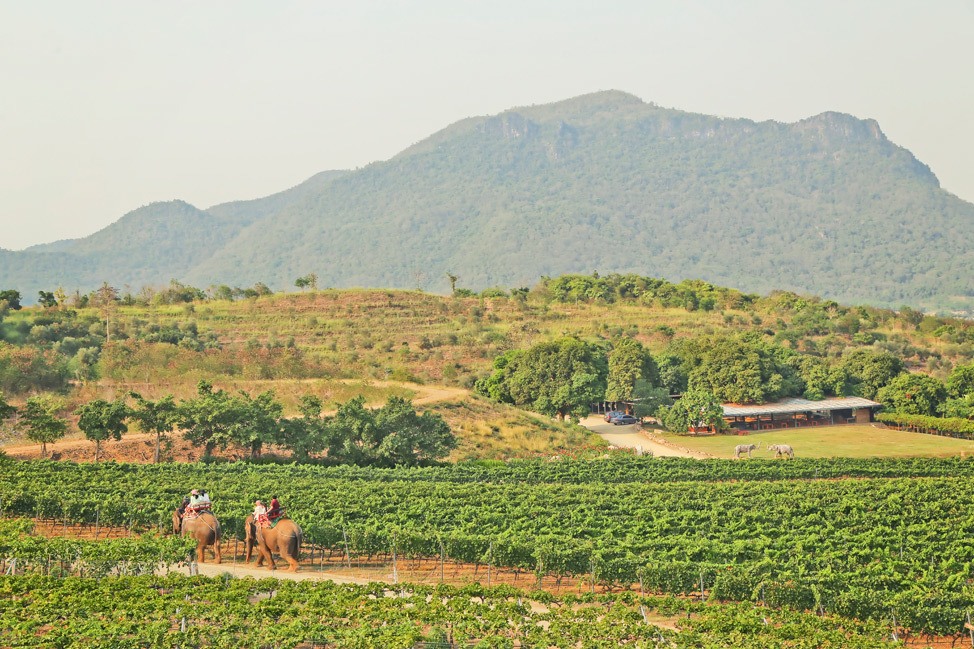 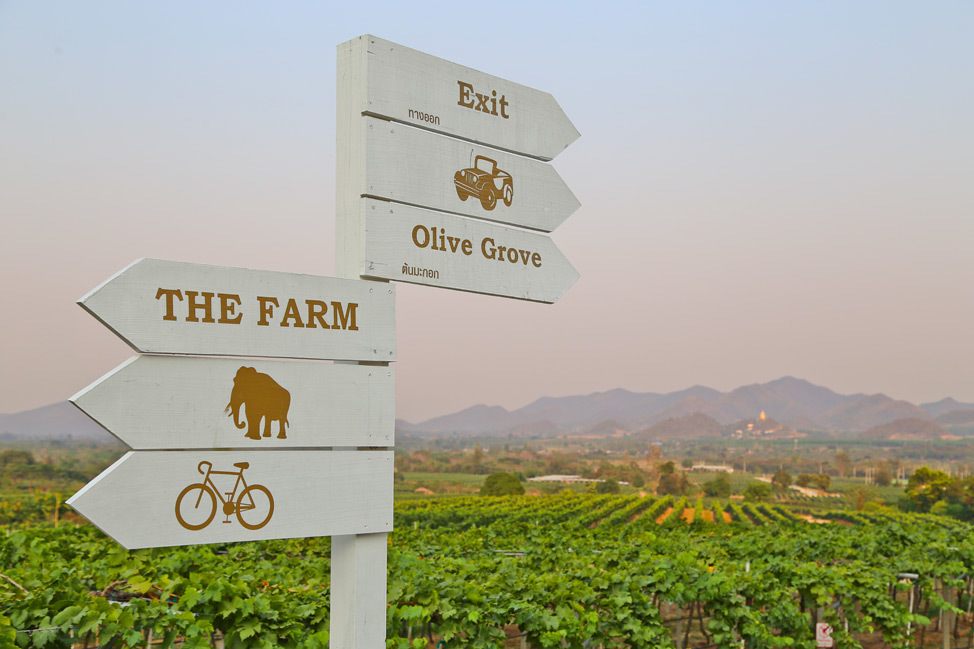 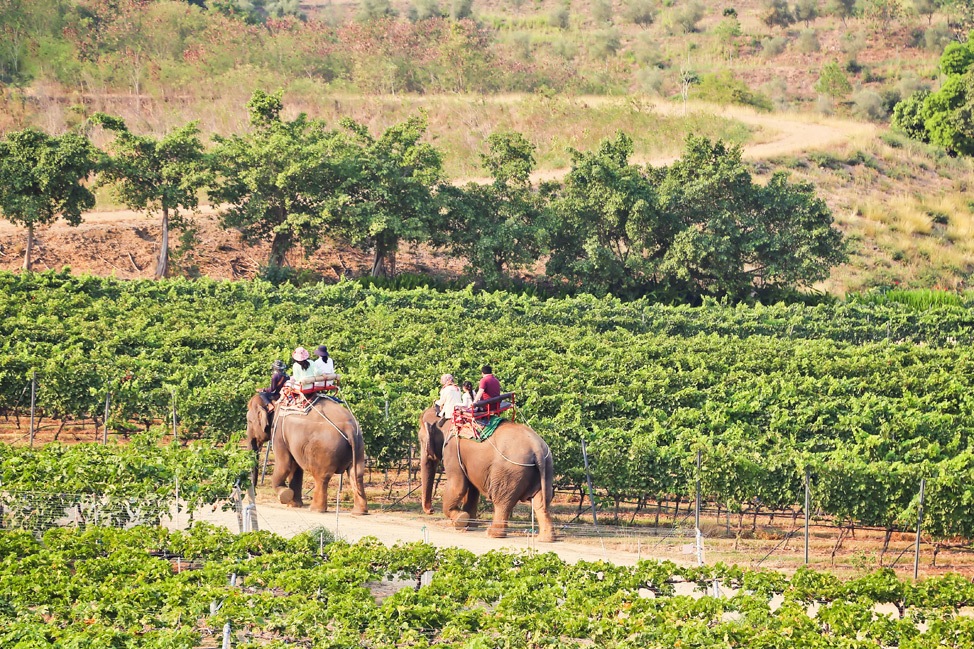 Togther, Hua Hin Hills and Siam Winery produce Monsoon Valley Wines, one of the most common bottles spotted on shelves in Thailand. The company also produces Spy Wine Coolers, the best-selling “wine-based drink” in the country, a financial stepping stone that allows them to produce their prestige wines. The family behind the brand is no stranger to beverage-based success: the winery was founded by the late Chaleow Yoovidhya, cofounder of and recipe-creator for Red Bull.

In 1986, Yoovidhya’s oldest son Chalerm established the Siam Winery company, which today represents over 30% of the Thai wine market — and recently overtook PB Valley as the most prolific producer in the country. As of 2014, the company was producing 260,000 bottles per year, with over half being exported to Europe, the US, and beyond.

And so after much anticipation, we were off to taste a few in The Sala. 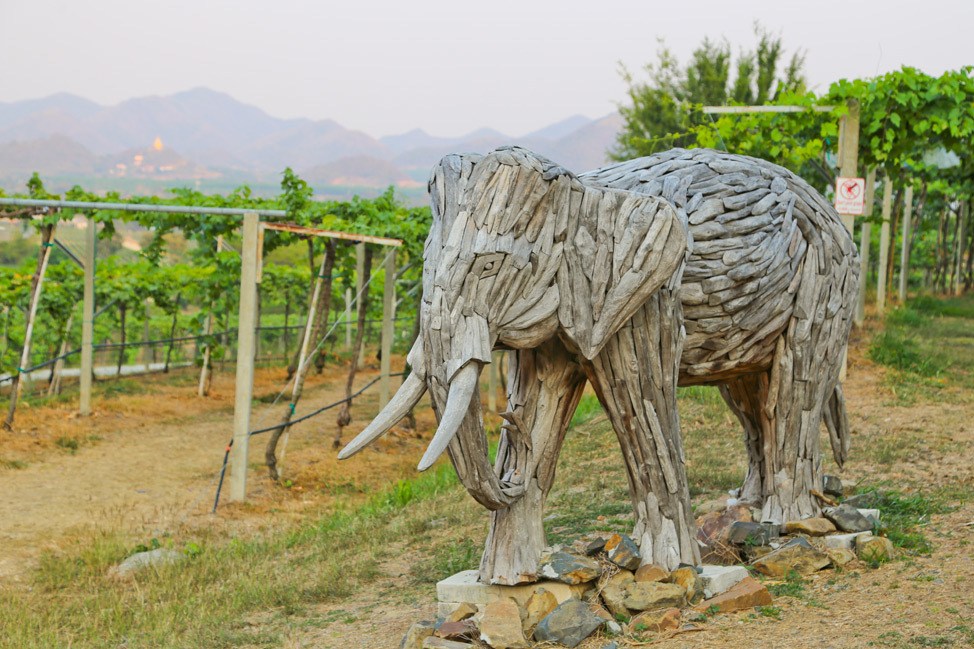 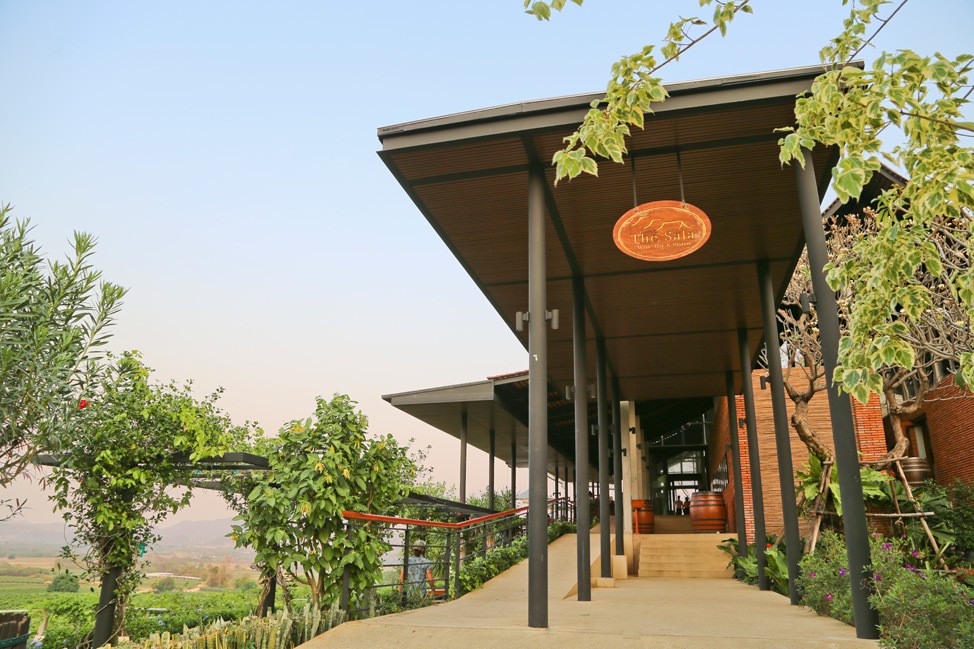 Inside The Sala, which serves breakfast as well as a daytime menu, our eyes widened at the offerings for both wine tastings and treats. The obscenely affordable Khao Yai region had spoiled us, and these prices seemed shocking in comparison. But we quickly decided to throw budgetary caution to the wind, accept that this was going to be far and away our most expensive winery visit, and just enjoy it. 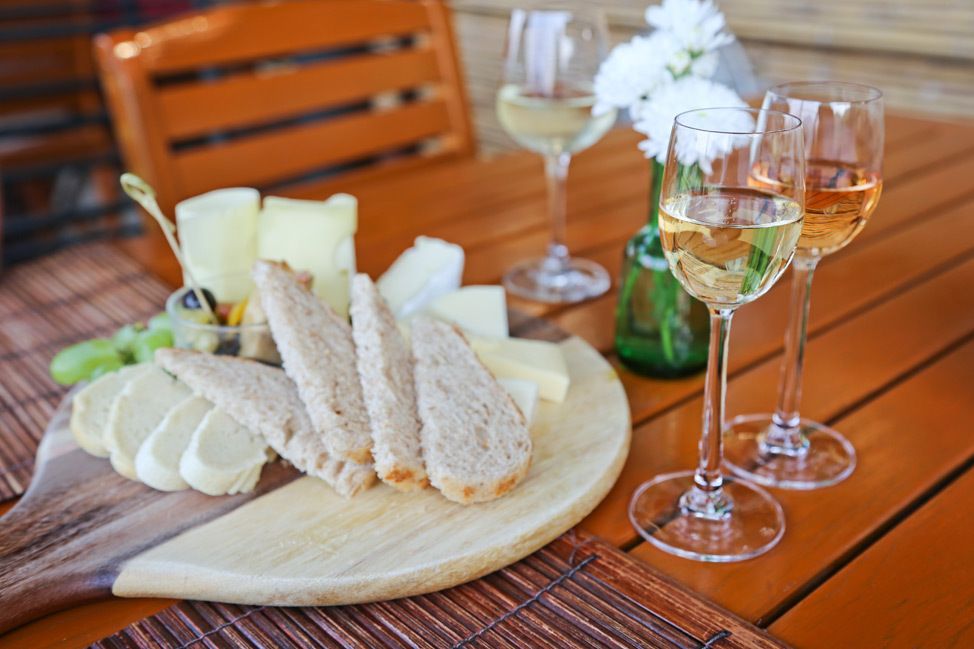 We settled into a vineryard-side table and I selected the Sweet Wine Tasting for 240B, which included glasses of the Muscat and Chenin Blanc Late Harvest. Ian went big with the Grand Monsoon Valley Tasting for 1,050B, which included a Colombard, a Cuvée Blanc, a Chenin Blanc, a Shiraz, and a Cuvée Rouge. We passed on the Thai tapas pairings and instead ordered a cheese board, which was perfection. Unlike the wineries we’d visited in Khao Yai, which were European influenced in everything from their menus to their architecture, this one was all Thai.

There’s no mistaking it — these are Thai wines produced from Thai grapes to complement Thai food. The labels are emblazoned with the mythical naga, a Thai guardian figure, and the bottles are stamped with the Thai Buddhist year — currently, it’s 2560 — rather than the widely used Gregorian calendar in which we just rang in 2017. Funny enough, there is one quirk in this otherwise thorough exercise in Thai nationalism: a German winemaker, Kathrin Puff, who makes the magic happen at Monsoon Valley. 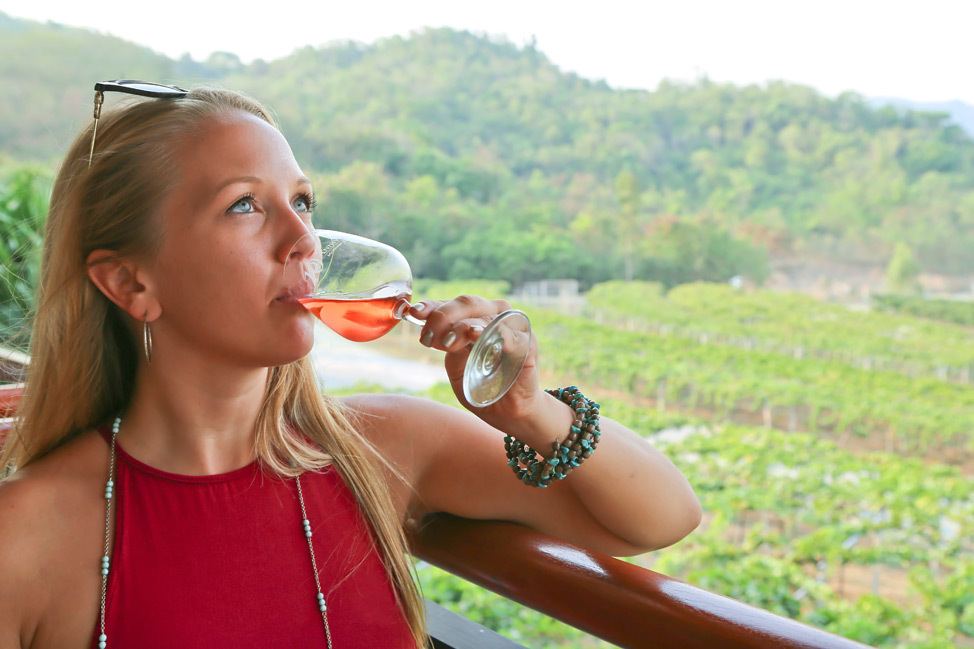 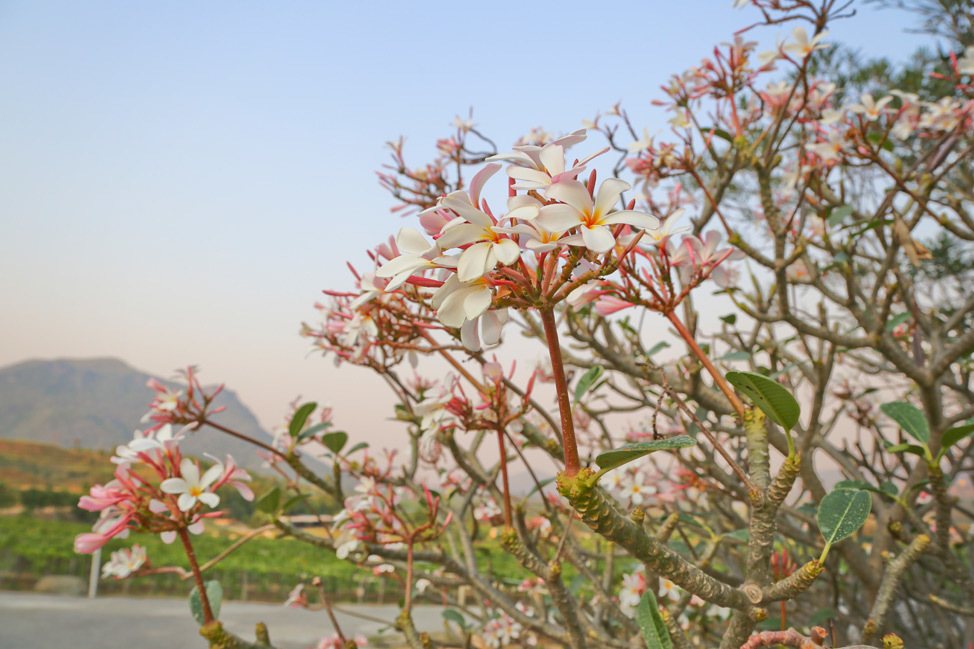 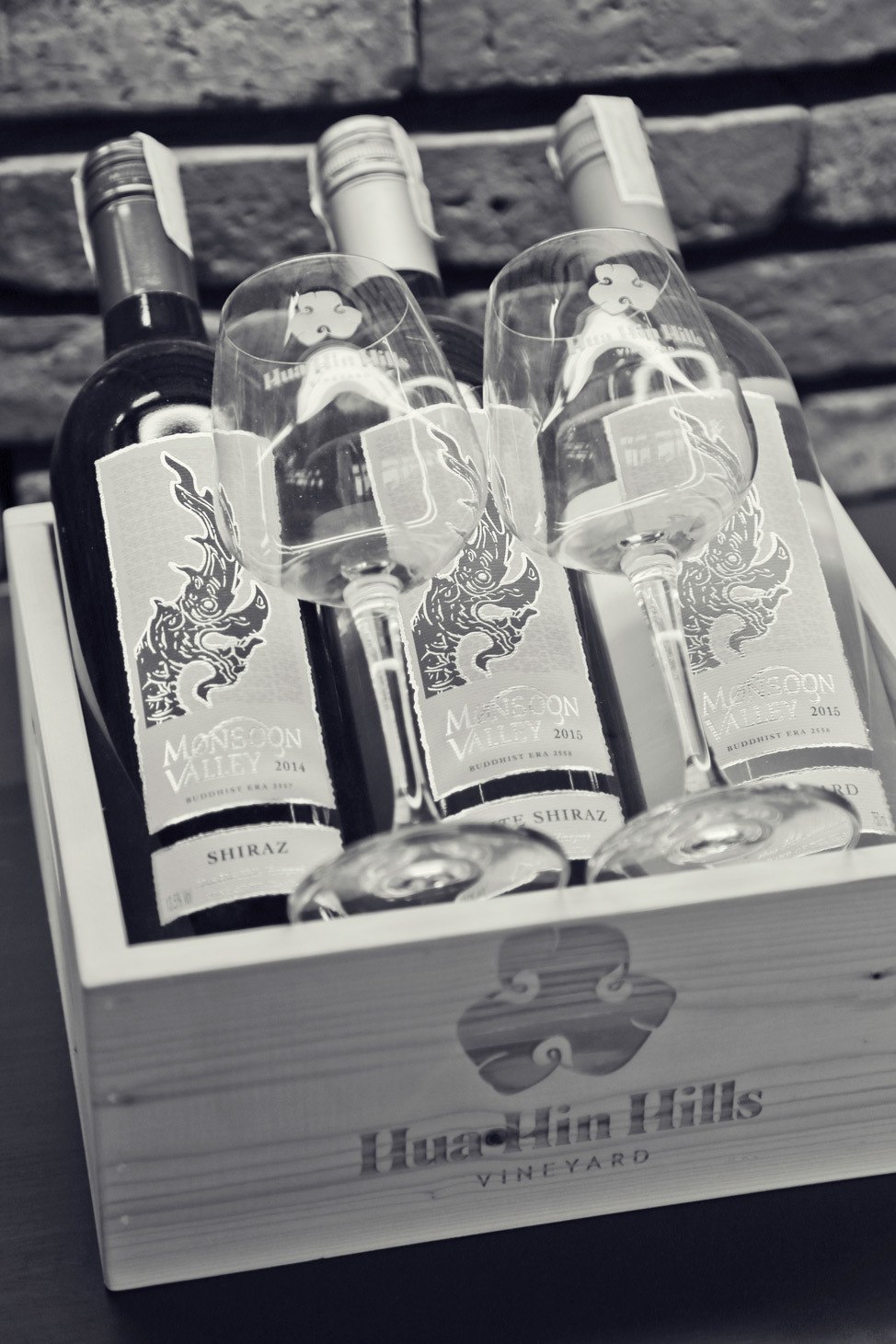 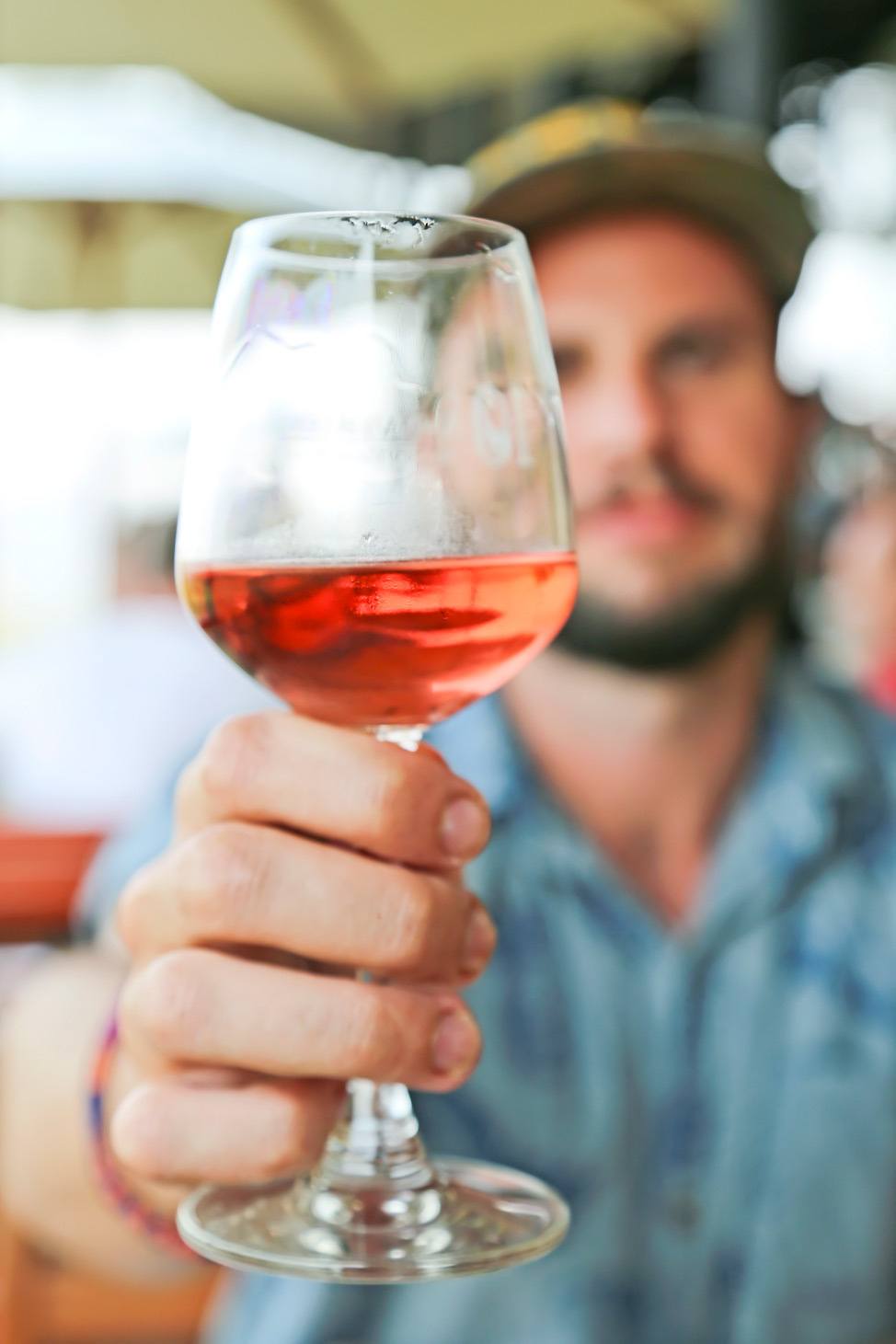 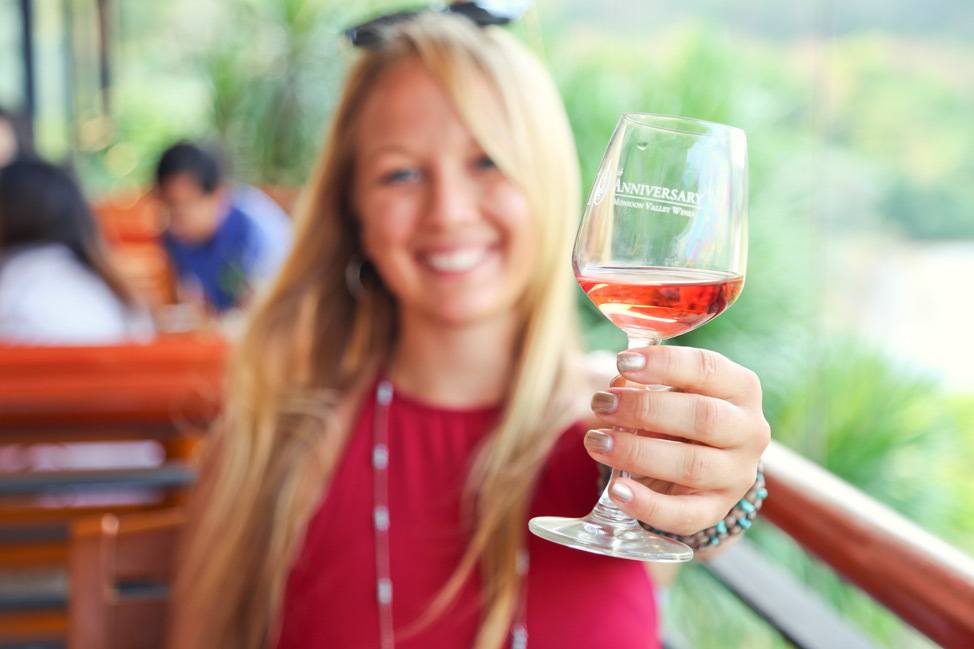 After our final toast, I was ready for a little playtime among the vines. 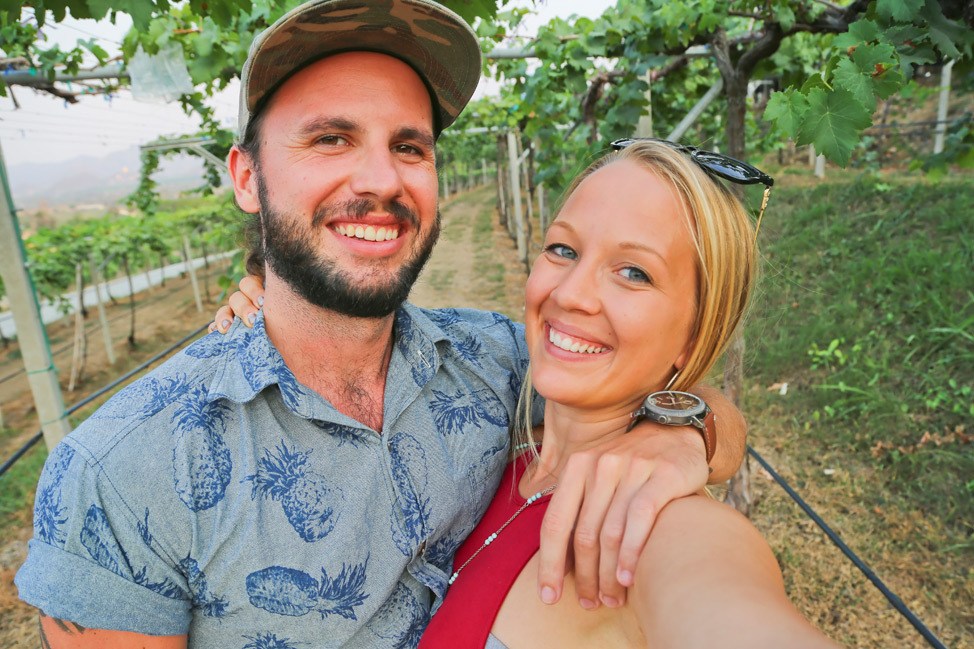 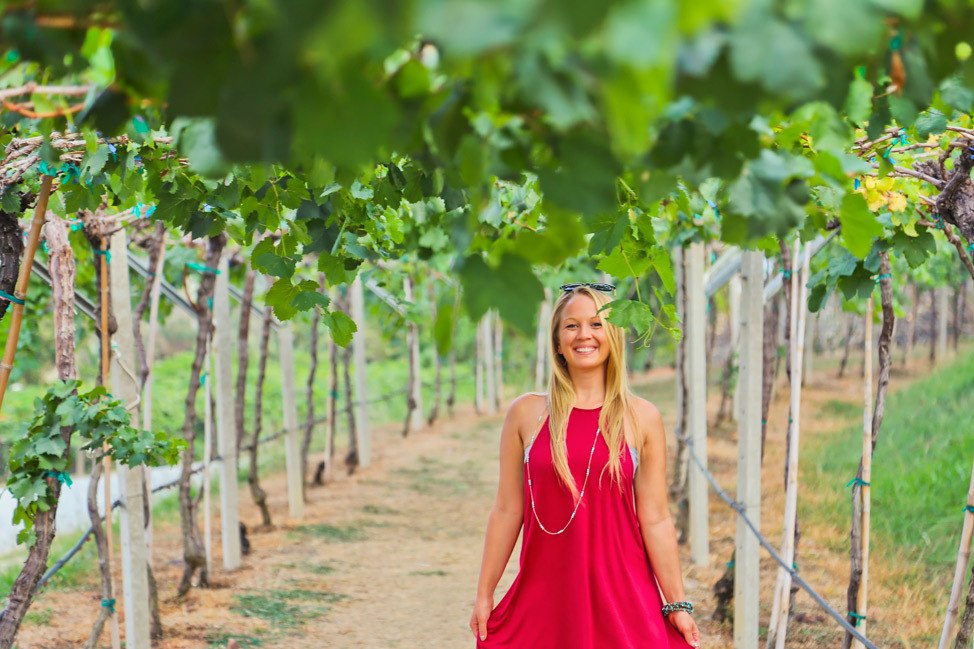 It had been the perfect afternoon — though it hadn’t quite started as planned. We had taken our resort’s free shuttle into Hua Hin to catch the official vineyard shuttle from their Hua Hin Hills Bistro & Wine Cellar downtown. (If you can’t make it all the way out to the vineyard, this is a chic little spot to taste and buy Hua Hin Hills wines right in town!)

The round trip shuttle leaves twice a day for 300B per person, first at 10:30am and returning at 2:00pm and next at 3:00pm and returning at 6:00pm. However, we made the critical mistake of not booking ahead, and arrived to find that the shuttle had filled and left before our arrival. It’s worth noting I’d scoured the website and seen nothing about reservations… but I still should have known better.

Luckily, an ex-employee-turned-taxi-driver was loitering around the bar and heard our tale of woe and offered to take us for 1,000B (about $35) round trip. Considering we were going to spend 600B on the shuttle, it wasn’t a bad deal for a forty-five minutes each way in a private SUV — and he even called the winery for us to let them know we were coming and to hold the tour! Lesson learned. If you plan to take the vineyard’s shuttle, call ahead to book. 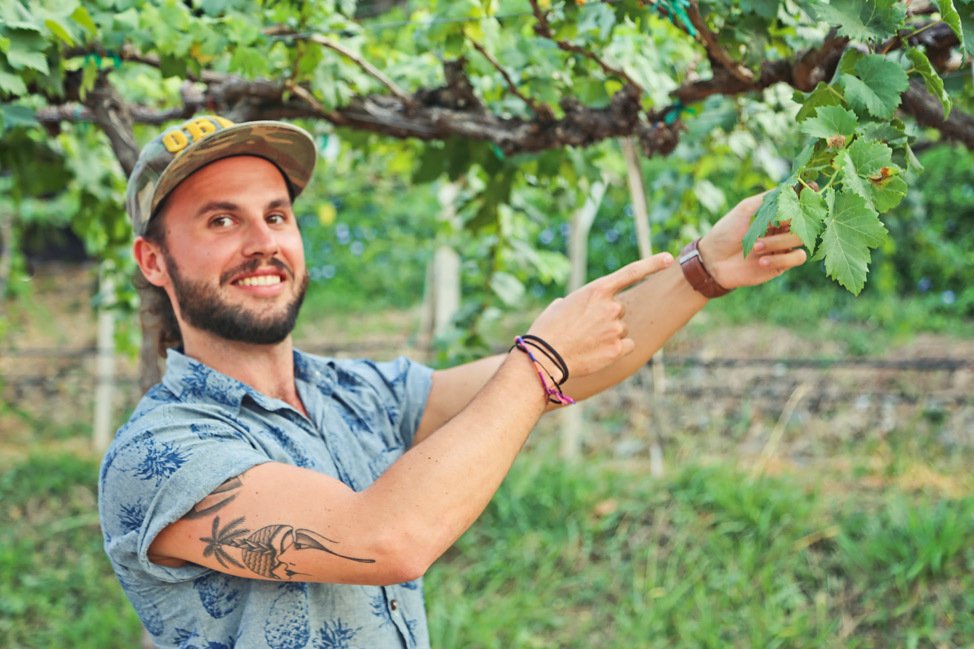 So yes, our trip to Hua Hin Hills was a bit pricier and more chaotic than our previous Thailand winery trips. But it was a completely unique experience, and possibly the most scenic — and when it came to The Sala, architecturally impressive — of them all, and so we treasured every last drop.

Cheers, Thailand, for another delicious tasting!

A Sip of Aloha: Drinking Local at Maui’s Winery, Brewery, and Distilleries