Jawsfest! A Festival of Cinema and Sea

Isn’t it amazing when a cluster of your passions come together in some awesome travel-tastic way? Like a dessert festival in a foodie’s favorite city, or the Hawaii Ironman for athletic island-lover. For me, one of those moments of bliss happened this summer at Jawfest.

Jawsfest seamlessly tied together three of my favorite things — movies, Martha’s Vineyard, and mouthy fish (also known as sharks). This second celebration of all things Jaws was inspired by Universal Studio’s 100th and Discovery Channel Shark Week’s 25th anniversaries, as well as the release of Jaws on Blu-ray DVD and the 37th anniversary of the release of the film. 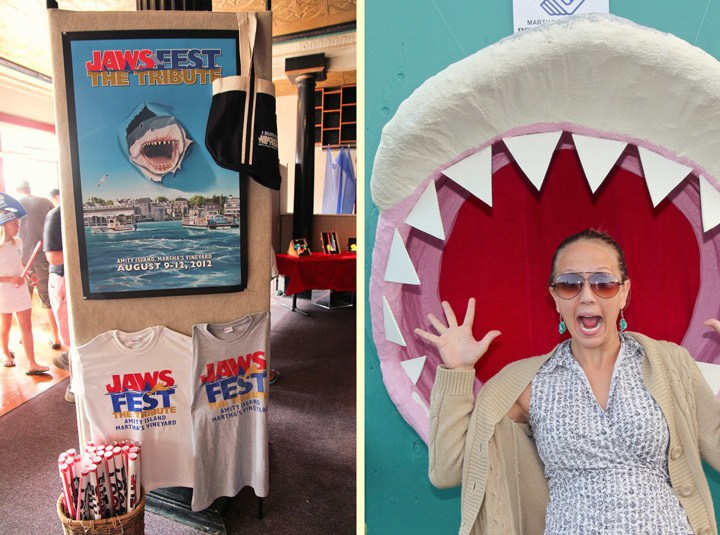 Back at Beneath The Sea in March, I met a shark activist who handed me a Jawsfest flyer and encouraged me to attend. As if I needed convincing. I am, after all, a girl who once threw a Jaws

party replete with a lifeguarding uniform, ocean-themed baked goods, and the best shark accessories that Party City coupons could buy. 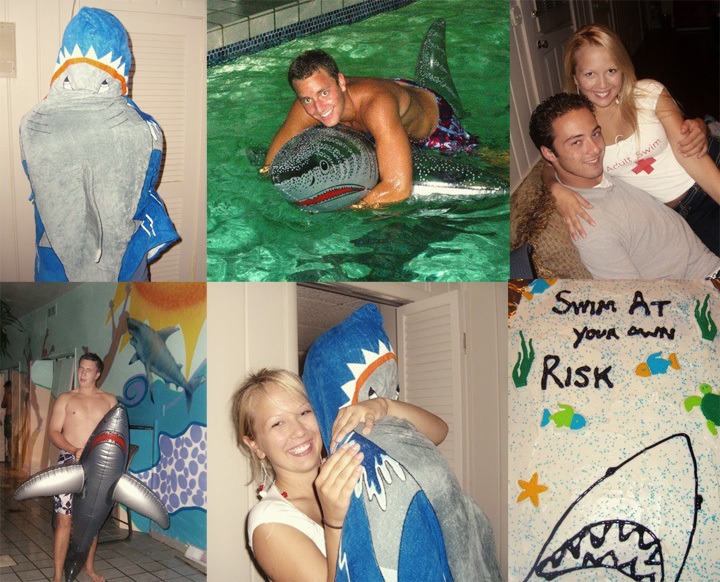 My own personal Jawsfest in 2007

Jaws has always fascinated me. The movie that went on to be the third most successful summer blockbuster of all times had a rocky conception. Production was troubled from start to finish with the budget going 300% over and the filming going one hundred and four days over schedule. It changed movie making forever. And seeing it decades later changed me forever. I vividly remember seeing Jaws for the first time — in Martha’s Vineyard, no less! — and my relationship with the water changing instantly. For years I didn’t dare close my eyes underwater, even in the pool. Over the years as I embraced diving and the ocean my fears changed from terror that sharks would hurt me to terror over what my own species is doing to sharks.

So once I heard the event would have a strong shark conservation aspect to it, I was totally sold. As my long term readers know, I’m a bit of an ocean hippie. I am deeply concerned about the plight of ocean’s top predators, grateful for the activists working so hard to protect them, and fascinated by the role of the iconic Spielberg film

in all of this. This weekend would teach me even more about the plight of the creature I spent so many years fearing. 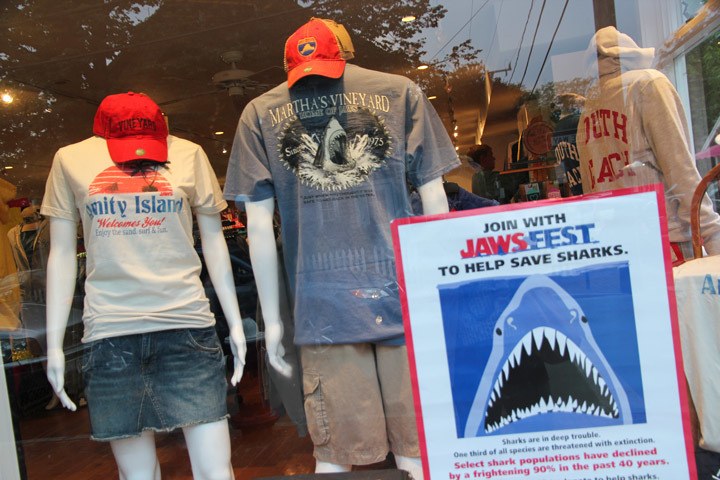 The location of Jawsfest didn’t hurt my convictions to attend either. Martha’s Vineyard has a very, very special place in my heart after a childhood of idyllic summer vacations spent there. It’s both the inspiration for Amity Island — the setting of Jaws, and also the location where the movie was filmed. It didn’t take long to get my mom to entertain the idea of joining me for a weekend stroll down memory lane.

As soon as we disembarked our ferry on to the Vineyard I could tell the island was taking this event seriously. Very seriously. 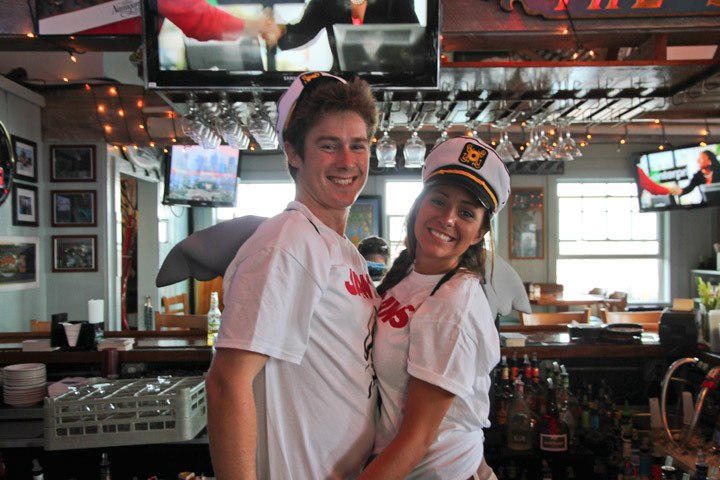 Restaurants, shops and local businesses all banded together to get in the sharky spirit. The former advertising major in me leapt with joy at the creative ads popping up around town. “A newspaper you can sink your teeth into”  was a favorite slogan from the Vineyard Gazette. Walking down the streets of each town on the island we encountered Jaws t-shirts, Discovery Channel Shark Week hats, and even a mini-van cruising the streets with a fin tied to the top. The fans had arrived.

My first stop on the Jawsfest circuit was to Behind the Screams, a memorabilia exhibit including props, scenery, original storyboards and photos from the making of Jaws

. The weekend schedule was packed with  events, from an Amity Adventure Trivia Hunt to Shark After Dark post-parties to Shark in the Park, a family fun day with a three-story shark slide. 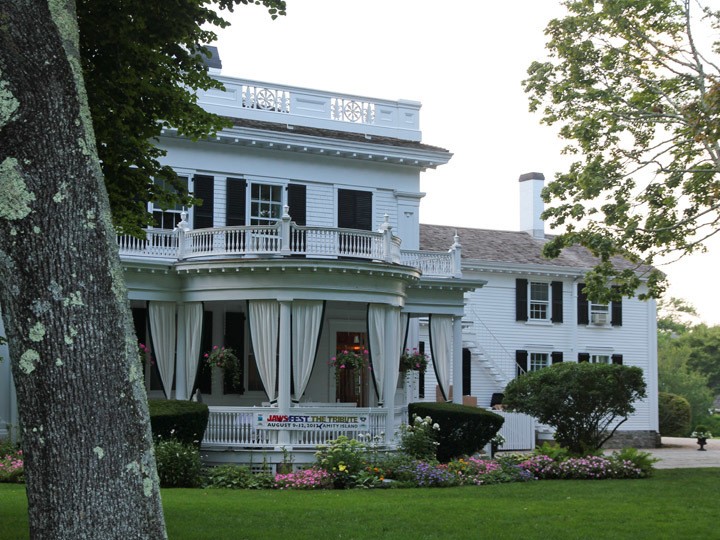 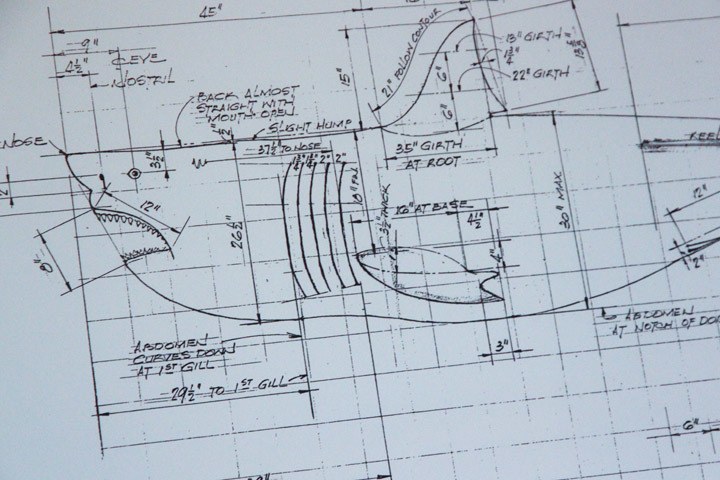 It was great to get to see behind the scenes and get a peek into the film’s production, especially the notorious great white himself. For those that don’t spent their August weekends trolling Jaws super-fan events, I’ll give you the short version: the mechanical sharks were a major fail. Such a fail, in fact, that they forced Spielberg to go with a “less is scarier” policy and use music and clever editing, rather than gratuitous shark-shots, to induce anxiety in the movie goer. It worked, and is part of the genius that allows a movie made in 1974 and devoid of today’s special effects to still get a theatre full of people on the edge of their seats. 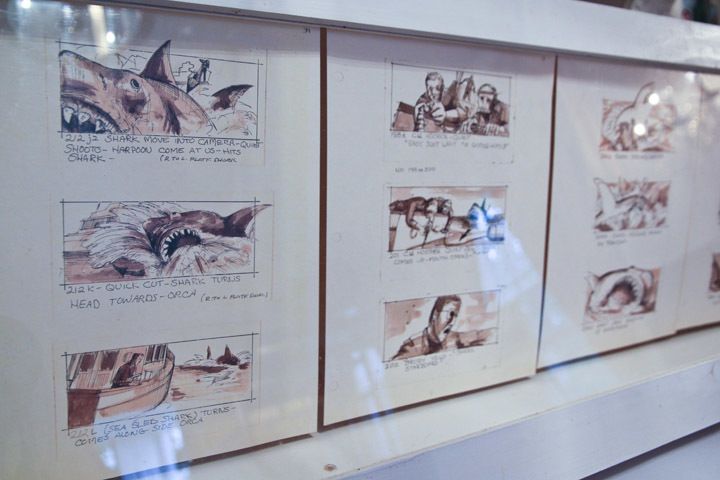 One event from the weekend that I was extra excited to attend was Sharks, Arts and Conservation, an exhibit of big fish inspired artworks. The opening ceremony boasted an impressive roster of artists, shark experts and conservationists who were there to spread information and boost interest in the fascinating creature that inspired Jaws 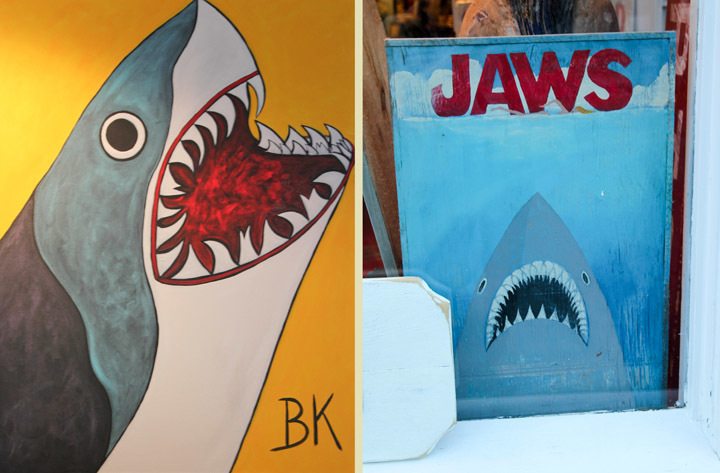 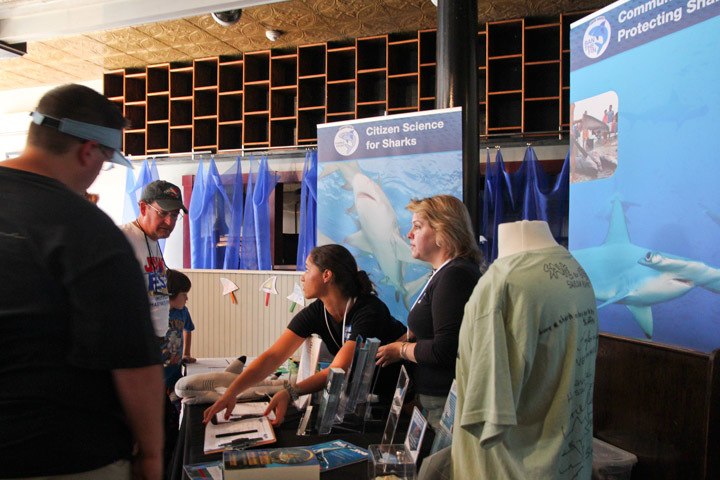 Now, some readers may be wondering why it is so important to preserve a species that inspires heart pounding fear and downright pants peeing in so many of us. In reality, sharks have much more to fear of us than we of them. While your chance of being killed by a shark is one in 300 million, more than 80% of sharks are threatened or near-threatened with extinction, and up to 73 million sharks a year are killed for their fins. This spells danger for the entire ocean — as an apex predator, removing sharks from the food chain may mean its ultimate collapse.

Sharks maintain fish stock and are valuable for eco tourism, and they deserve a place on this planet. You can help by saying no to restaurants that serve shark fin soup, supporting legislation banning the shark fin trade, and consider donating to shark conservation groups. 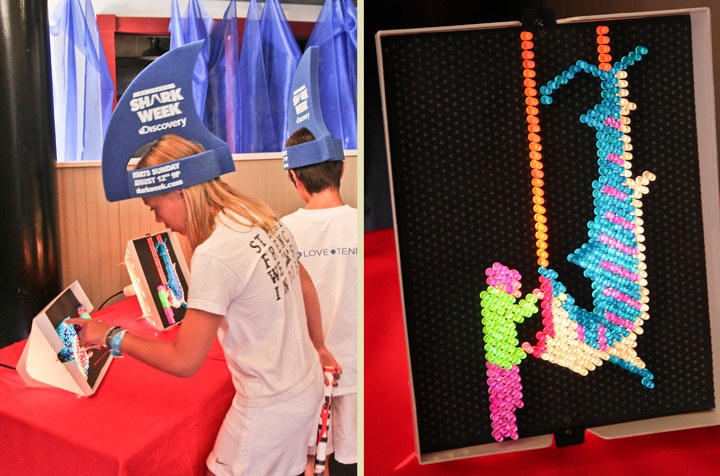 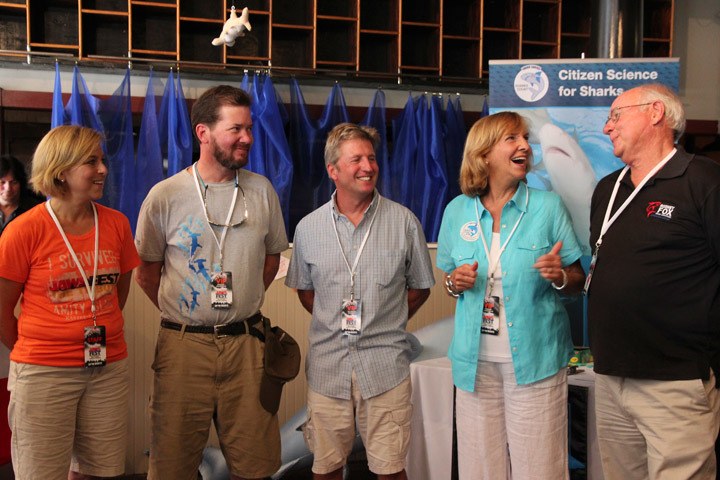 The heart of the festival was the array of Living Jaws sessions, held in the Old Whaling Church in Edgartown. Here cast members, Vineyard locals, and other Jaws VIPS joined forces to create intimate panels about different aspects of making one of the greatest movies of all times. Panels covered a number of topics, some focusing on shark conservation, some focusing on the movies infamously drama riddled production, others focusing on impromptu stories and personal tales from those most intimately involved in the movie.

On the panels I heard from Shark Week executives, extras from the movie, Rodney Fox, a famous shark attack victim now involved in conservation, and more, including Wendy Benchley, wife of the author of Jaws — the book that inspired the movie. My favorite tidbit from the panel came from Mrs. Benchley, who revealed that originally her husband Peter had written the book as a comedy. In my opinion those campy undertones still come through and are part of what I love so much about Jaws. 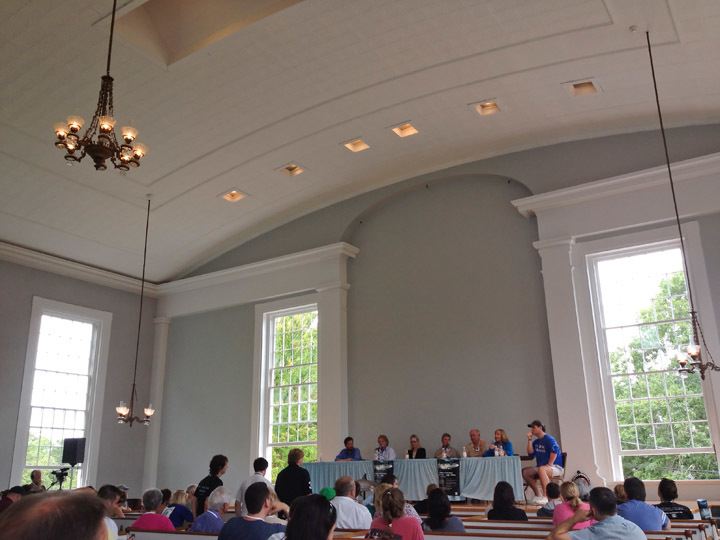 The grand finale of Jawsfest  was Jaws on The Big Screen, an outdoor screening of Jaws in Oak Bluffs park. A crowd of nearly 1,800 fans camped out on the lawn in order to watch the movie under the stars and beside the ocean that started it all. We laughed, we jumped with nerves, we chanted out the iconic lines, and at the end we rose to our feet in applause. It was the perfect end to a fantastic festival. 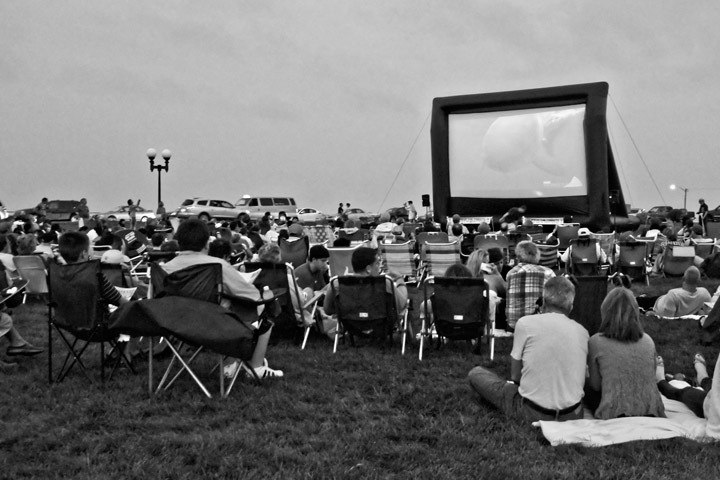 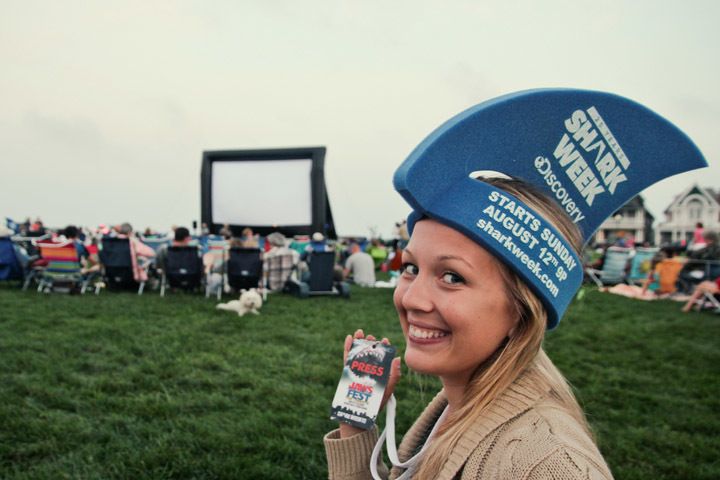 I’m so grateful to Jawfest for bringing me back to good ol’ Amity Island, reminding me of my love for Jaws and my concern for the great creatures that inspired it, and for putting on a rocking weekend event. 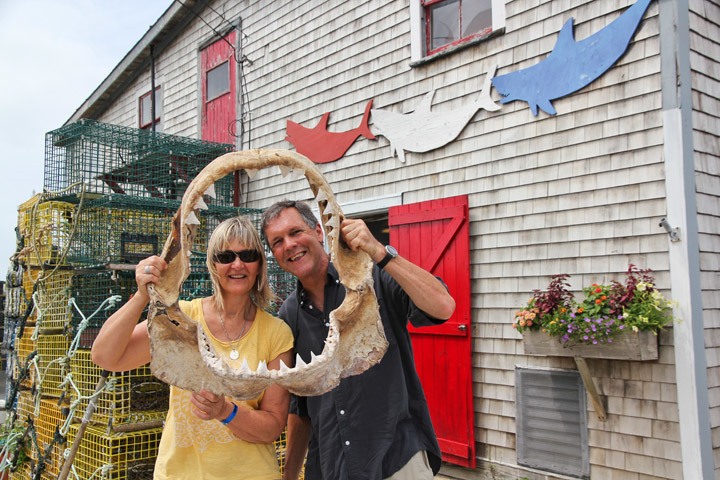 We stuck around in Martha’s Vineyard for a week and I’ve got more posts to come about the island I love so dearly, my first time camping, and a whole lot of other Vineyard goodness. But I’ll sign off for now because otherwise — to use a joke I’ve made before — WE’RE GOING TO NEED A BIGGER BLOG.

And if you don’t get that jest, it’s time to snuggle in with a DVD of Jaws. Haven’t I convinced you by now? 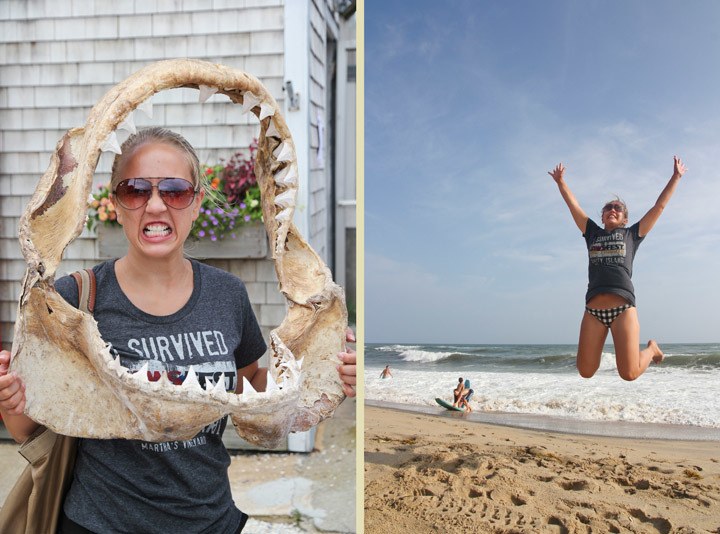 Thanks to Jawsfest for my Press Pass to cover the event. I look forward to the next one!

What I Spent on Wonderfruit

TBEX’12: A Weekend of Inspiration and Altitude