Bahamas Day 5: Live Every Week Like its Shark Week

Confession: When I was maybe 12 my family went to Martha’s Vineyard for a vacation. We rented a house on a big beautiful freshwater pond and planned to take full advantage of the included kayaks and windsurf boards. One morning my mom and I were the only ones up and she convinced me to go out on the two person windsurf. I was wary of any non-pool water, as usual, but was assured I would stay safe and dry on the board.

I’m sure you can see where this is going and within 15 minutes we were capsized in maybe 13 feet of water with me screaming bloody murder and trying to crawl on top of my mother and use her as a life preserver. I knew as my mother she would want me to live and her to be sacrificed to the freshwater sharks which were OBVIOUSLY lurking inches away. I am disappointed to report that although I awoke every person on the lake, not one person came to our rescue and my mother had to drag me back to the dock in my catatonic state. To this day I maintain that I watched a special about freshwater sharks that year on Shark Week, though curiously that clip is not currently available online. 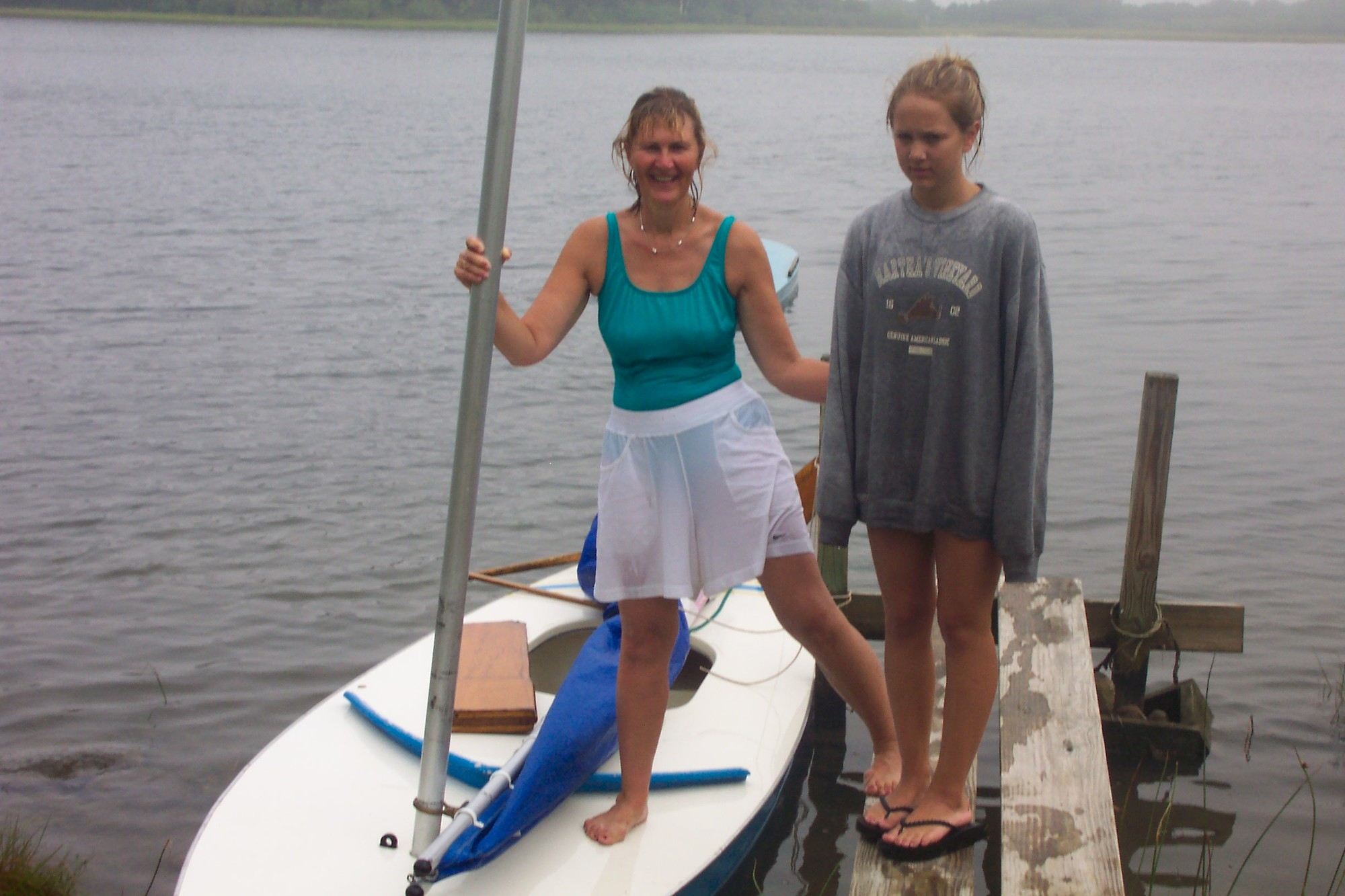 In fact, I’m going to come really clean. I lied to you up there where I claimed to be wary of “non-pool water”. Truth is I often watched my back in my own indoor pool. If you asked my childhood self if I thought it was feasible that a person would acquire a live shark, find the means to transport it to my landlocked suburb in upstate New York, break into my home, and release said shark into my chlorinated pool in a small enough window of time that it would still be alive when I got in to swim, I would likely have said no. But the fear was still there, alive and well.

I don’t tell you these stories to provide you with fodder for future pranks or to concern you about my mental stability. I tell you them to illustrate how amazing of a transformation I went through, to go from that, to this: 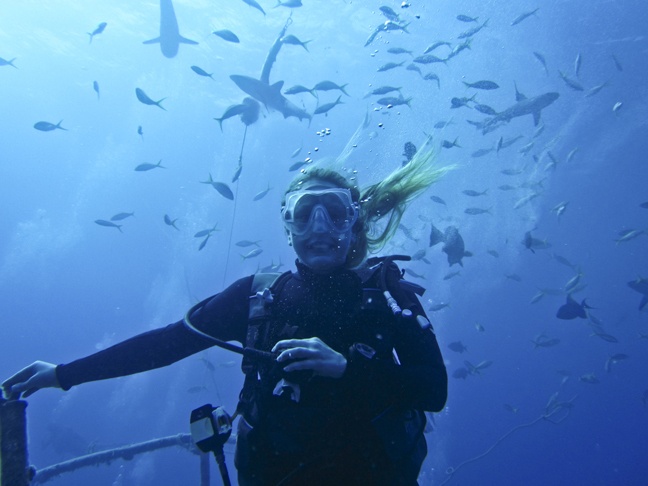 In case you can’t tell, those are real live shark in the background there. I guess I better start from the beginning. I knew from before stepping foot on the boat that the Bahamas were infamous for shark sightings and that the weekly shark dive on Blackbeard’s Cruises was a huge draw for most passengers. Still, upon arrival I was very undecided, especially after watching the many Discovery Channel specials I had downloaded in order to torture myself on the flight down.

My recruitment into the cult of shark diving was so smooth I barely knew it was happening. First, the sharks eased me into the whole idea by appearing at a very safe distance at the end of dives while I was ascending. Then, people on the boat chatted together about how great previous shark dives were, sharing inside jokes and stories, appealing to my intense desire to be part of a group and have, you know, inside jokes. Then, Mark assured me that I didn’t have to do it, but it would just  be so cool if I did, tugging at my desire to be a badass, adventure having kind of girlfriend. Then came the clincher. As people were suiting up on before the dive and I was still  hemming and hawing, one of my friends said, “Well it will be a shame if you don’t go in, you’ll miss so many great photos!”

And that my friends, is what did me in. Apparently my need to take photos is in fact greater than my fear of death. And so it goes I was seduced into the shark dive. Last into the water, my dive buddy Kristina and I were ready. 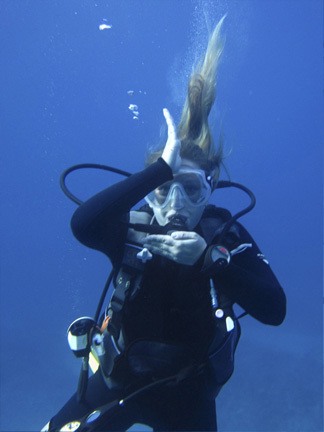 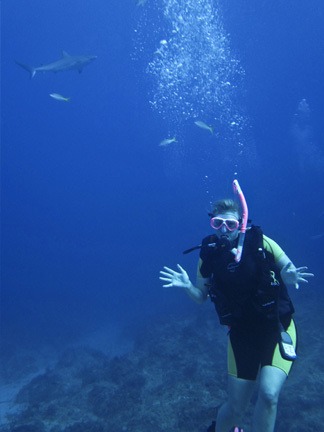 The feed was set up so that the “chumsicle” (as Mark called it) of frozen fish was tied off to the railing of a shipwreck and we sat either on the deck of the ship or further away  down on the sand. As soon as we were down I shocked myself by gravitating over to the deck. Its not the best picture, but you can see the setup here: 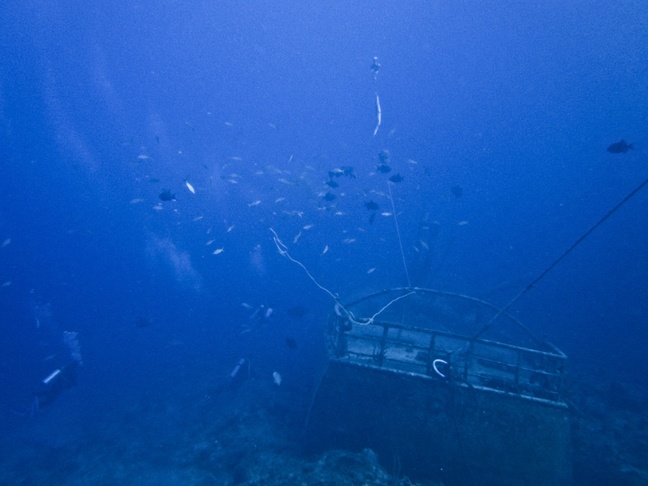 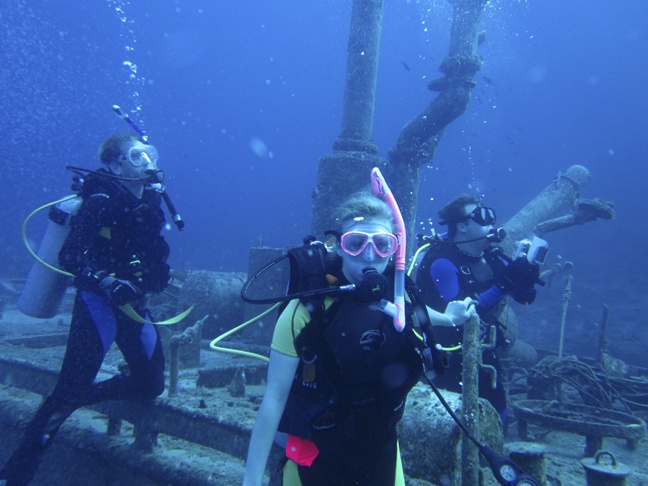 The sharks were everywhere. And not just sharks but big groupers, triggerfish, and snappers all fought for their share of the bait. It was manic and frenzied and a crazy adrenaline rush. 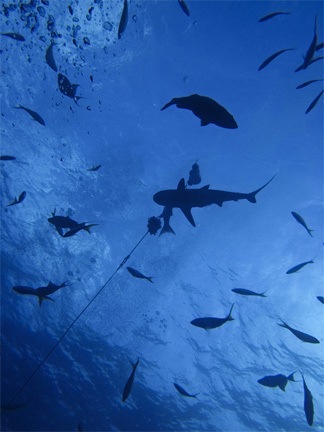 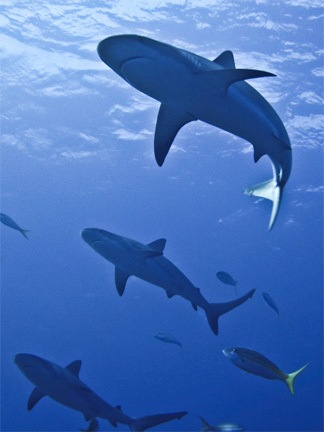 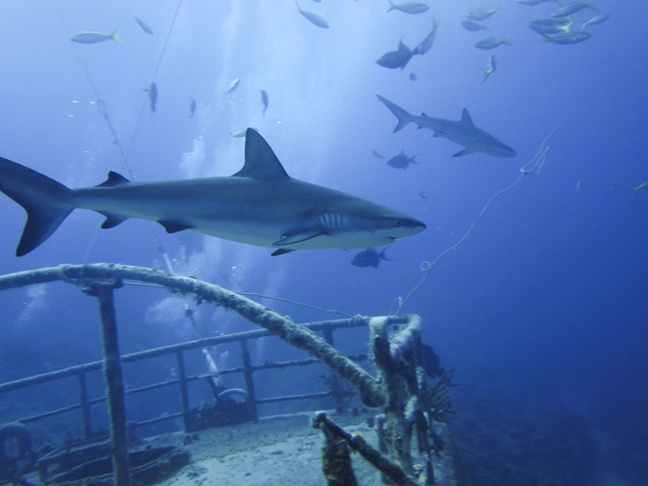 While it seemed to go on for ever, a quick glance at my gauge revealed only 15 minutes had gone by and most of the sharks had abandoned the remains of the chumsicle and were letting the fish go at it. I could not believe that not only was I still alive, I was pretty darn relaxed and cool! Still high on the whole experience and not ready to go up yet, Kristina and I played around the shipwreck a bit and even found a huge sleeping nurse shark in one of the lower decks. 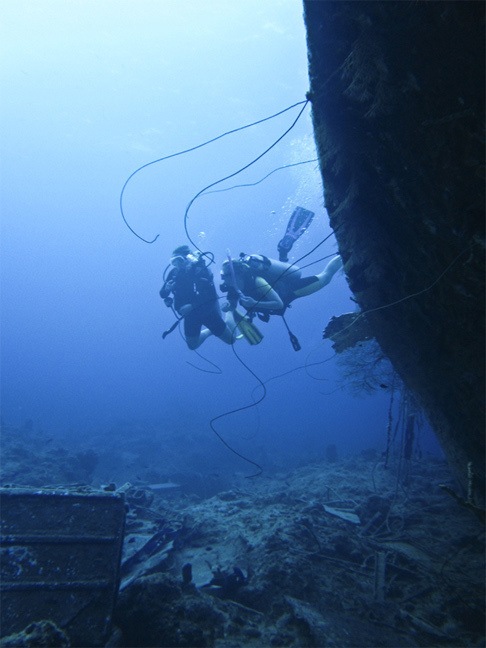 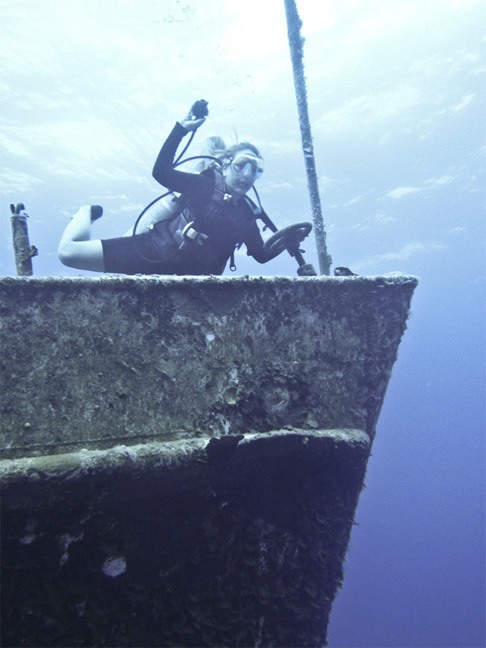 After a while I realized that we were one of the only pairs left under water! While I had been shockingly comfortable up to that point, I did not like the thought of so few other potential targets in the water with me. So Kristina and I headed towards the boat while Mark stayed under to remove the bait. 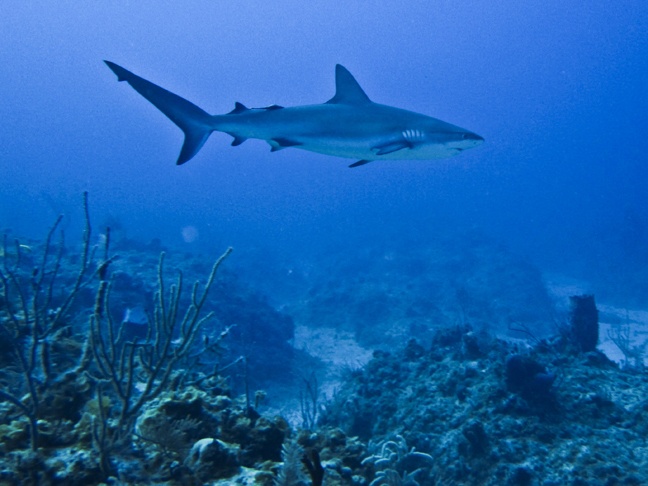 About halfway back I was starting to feel slightly uneasy but kept snapping pictures. Soon after taking this one I realized that figure in the background was not the same Caribbean Reef Shark that we had been swimming with… 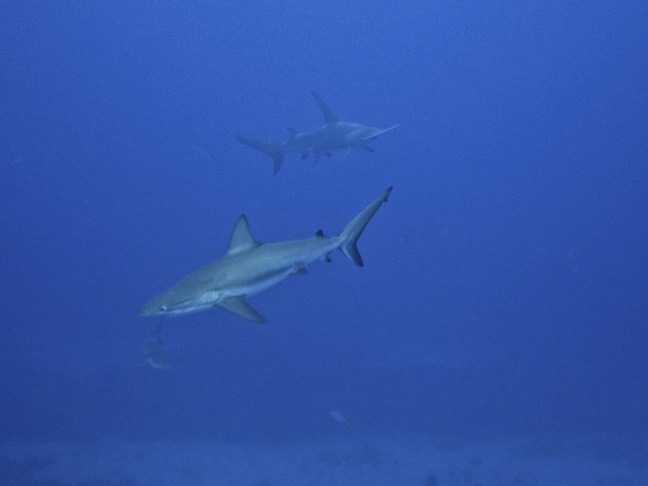 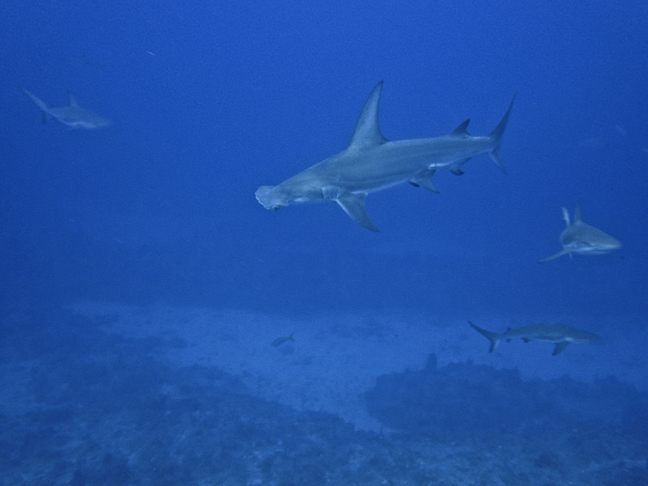 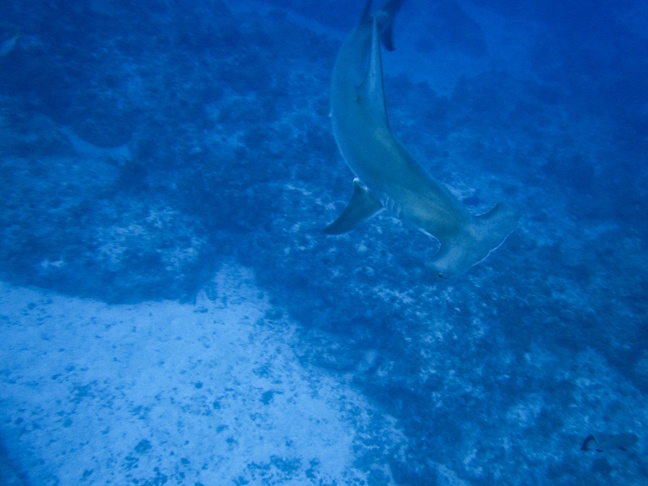 Basically the pinnacle of Scary Things You Can See in The Bahamas, The Hammerhead shark is big, mean, and did I mention scary? All my zen coolness that I had been so proud of myself for went out the window and I felt genuine terror as I bolted back towards the boat, convinced that any moment my fins would be ripped off me by the jaws of a beast.

To my shock we reached the boat injury free and bolted to the surface. When I breathlessly asked everyone about the hammerhead, it turned out we were the only three to have seen it! Mark eventually had to come back up empty-handed as the hammerhead wouldn’t stop circling the remains of the chumsicle, and I admit I sighed with relief when I saw him. With everyone crowding around to hear our tale, Kristina and I laughing at our inside shark jokes, and everyone passing around my camera to see my shaky photos, I was done for. I’m a full-fledged member of the shark dive cult club.

Underwater Wanderlust: Announcing my role as a PADI AmbassaDiver