Bahamas Day 4: An Education at the Island School

Isn’t there something horrible about starting the new year by sleeping through the day and feeling deathly? Last year Mark and I literally spent the day comatose on the couch, watching The Hangover, hungover. Well this time, things were going to be different. We were going to be active. And tour places. And pretend we weren’t so damn hungover. 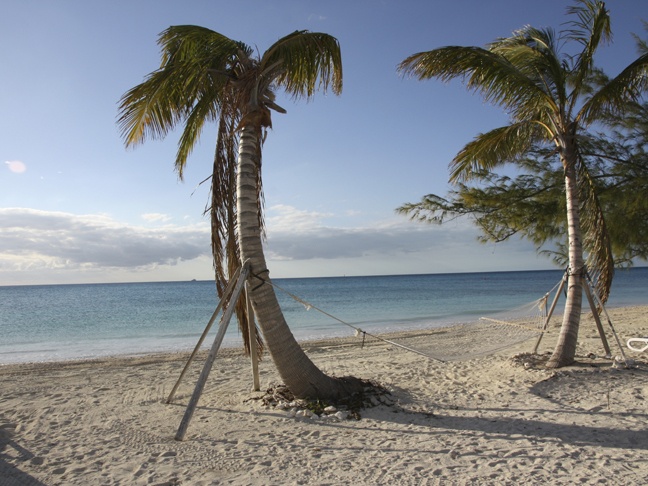 Prior to leaving Nassau, our captain had arranged for a New Year’s Day tour of the Island School of the Bahamas, a research station and 14 week program for high school students that focuses on sustainability. We had heard from the local divemasters the night before about the sky high tuition ($23,000 per semester) and the kids arriving on island in private jets. So needless to say I was excited to have a voyeuristic peek into the luxury compound these kids had somehow managed to convince their parents was educational.

And this is what I saw: 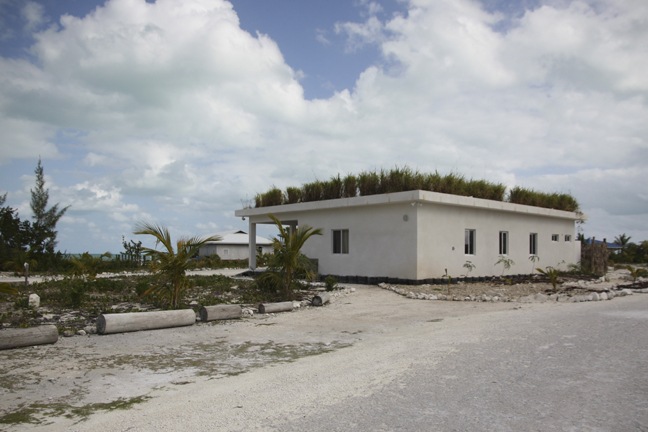 Yeah. Not what I expected. The first building we encountered was built with a foundation of recycled tires and had a roof that looked pretty darn eco-friendly. I was having trouble focusing early on in the morning but I would say that a roof made of plants is undeniably earthy. Next we encountered the dorms, built with dome shaped roofs in order to control the temperature more efficiently. Or something like that. In hindsight, perhaps I should have taken notes. 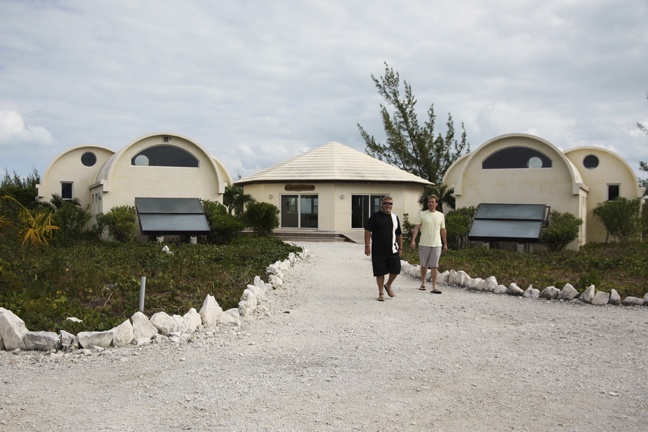 Next came the best part of the whole day: Mark rambling (drunkenly) into a megaphone about Sean Connery, the Women’s World Arm Wrestling Championships and other fictional tour highlights. He had the group pretty much in stitches and people seemed a tad disappointed when our real guide showed up. (Mark: “Who is this guy?”) 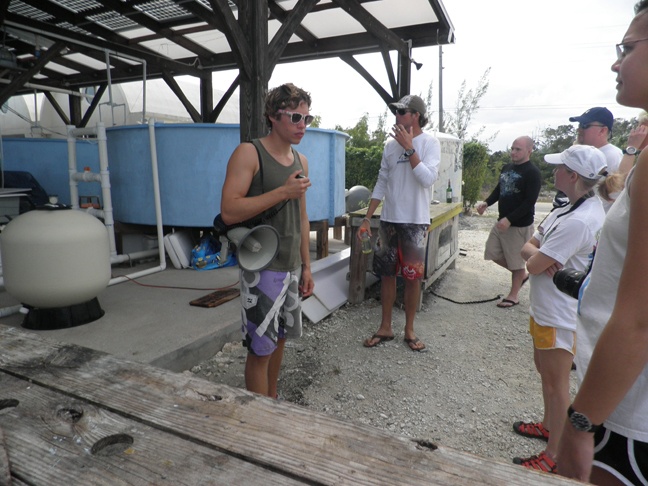 That guy was our guide, a young Australian teaching intern at the school. He told us those big blue tanks behind Mark were full of fish being both studied and used as fertilizer makers for the plants next door. 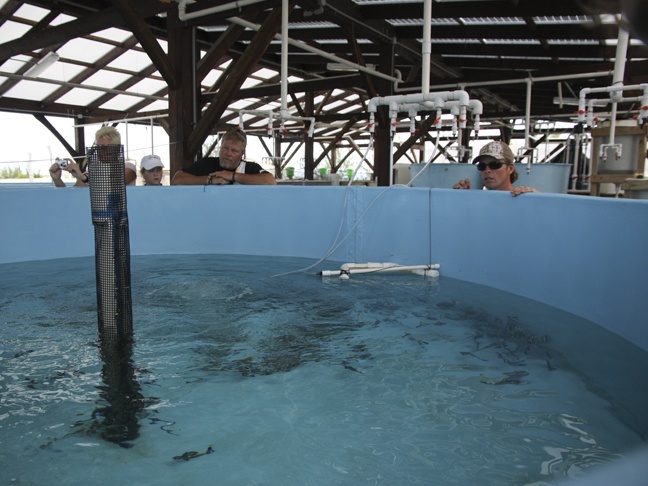 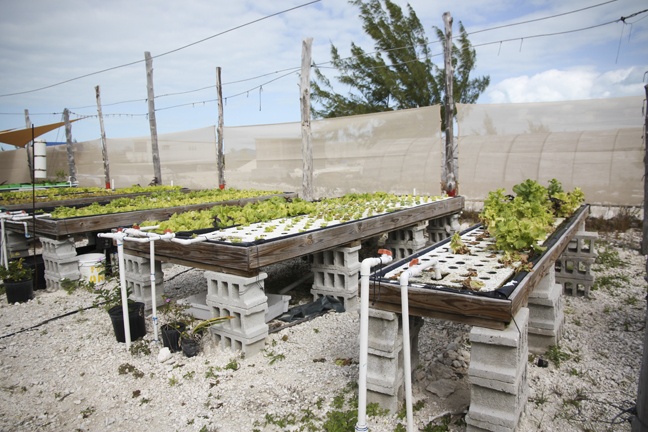 That symbiosis turned out to be the theme of the day. Its actually a super interesting program where kids and teachers run a campus that is nearly completely sustainable — they collect and use solar and wind energy, rainwater, and even the grease from cruise ship restaurants. The ladder is made into biofuel and used to power vehicles and generators on the campus. I was really excited about that idea, as the environmental impact of cruiseships is one of my major beefs with that industry.

Oh, and those that spent their childhood terrorized by Jaws should find some solace in this photo: 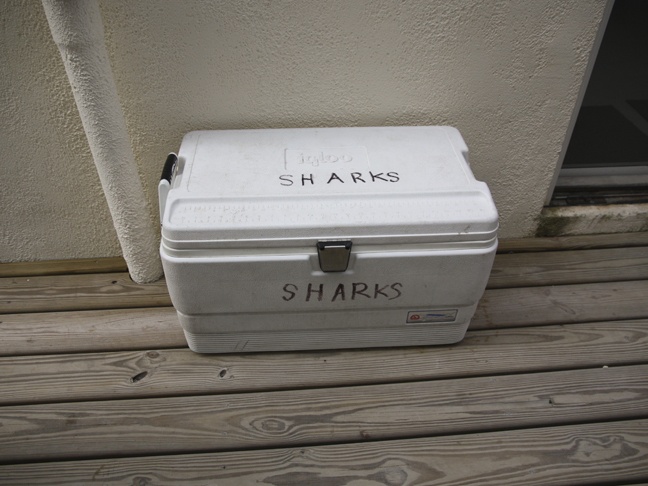 In addition to the outdoor laboratory we also toured the farm. Nothing new or planet saving or revolutionary here, just the time tested, undeniable cuteness of baby pigs. 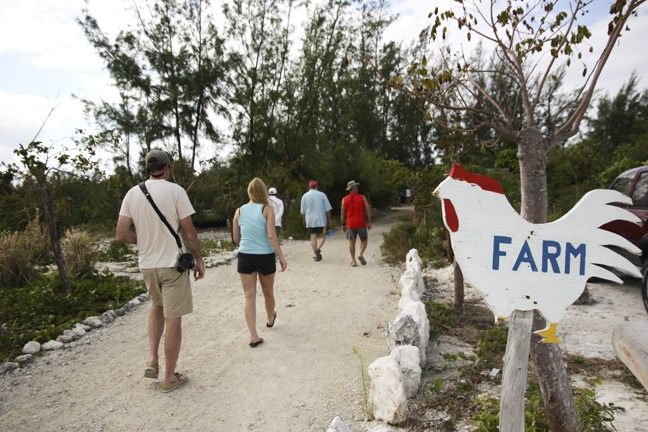 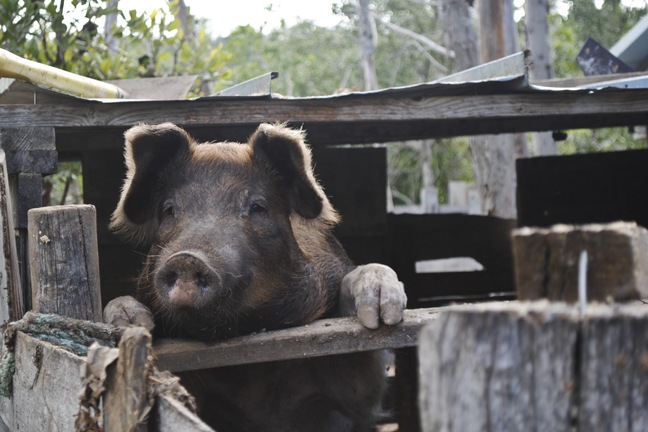 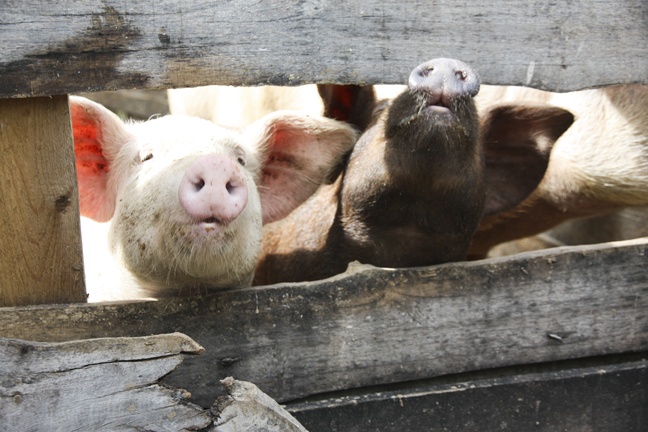 All in all I was impressed with the school and its sincere intentions and ambition. In fact I think the school says it best themselves. both the mission statements and visions are centered around a central question:

How can we live better in a place?

With the high profile of the students attending, we can only hope that as graduating classes go on to be future Masters of the Universe, they recall the lessons they learned in Eleuthera and try to find ways to live better on this planet.

After our tour, we walked back to the dock and I thought, well, that whole boat thing was fun. Wait, I have to get back on? But the beach is here! Well, I suppose this is a boat trip. I found myself desperately wanting contact with the outside world, and decided to cough up the $10 for internet even though we were leaving in 45 minutes. Of course the minute I put in my credit card info, the connection was cut and I was left in a sour mood. Not a great start to the afternoon. 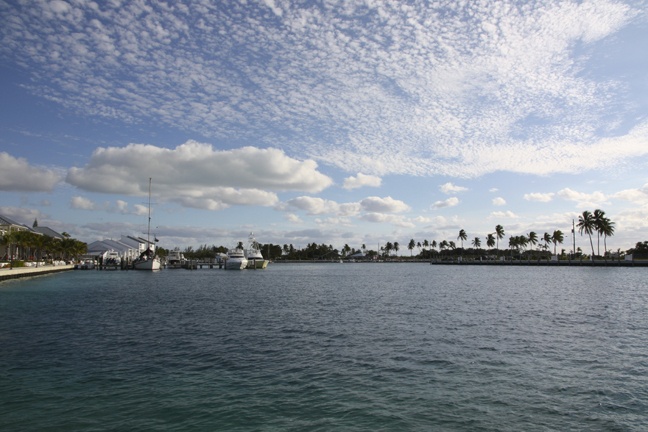 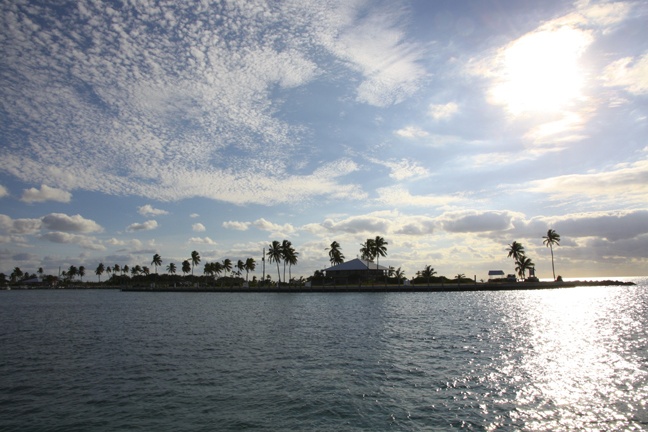 I skipped the first dive to do some writing and reading, and I was down in the cabin when Mark yelled down to me that there were dolphins next to the boat. It was amazing! There was a smaller boat behind us and soon they left us to play with them. It was a truly wonderful sight. 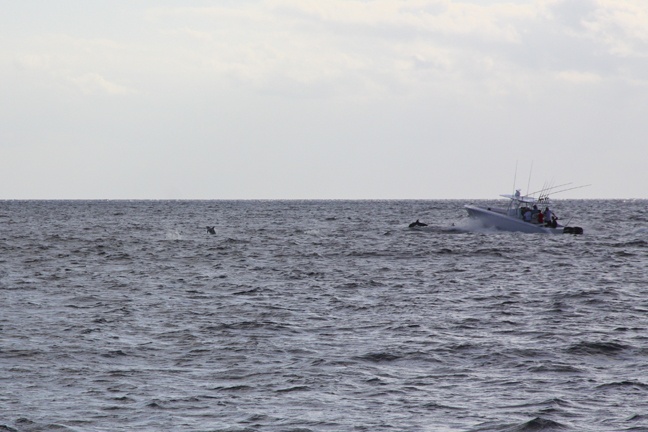 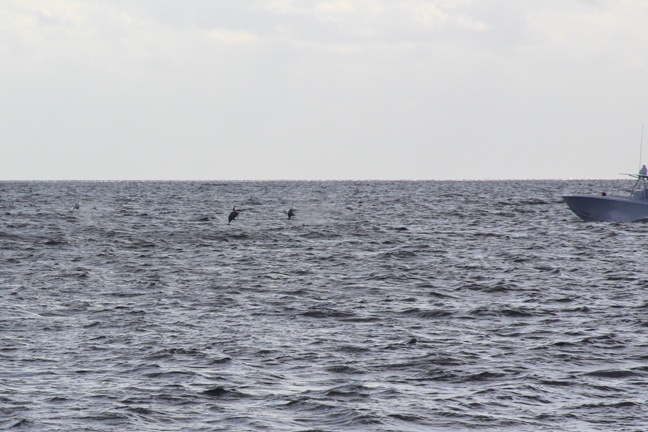 After being revitalized by the show of nature I decided to hop in for the late afternoon dive and was just blown away by the light.  It was a shallow site and the sun was hitting the surface at the perfect angle. Below on the right is one of my favorite dive photos, ever. 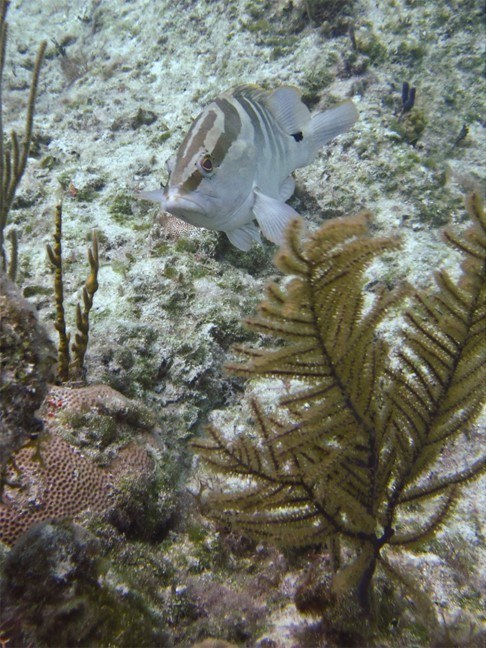 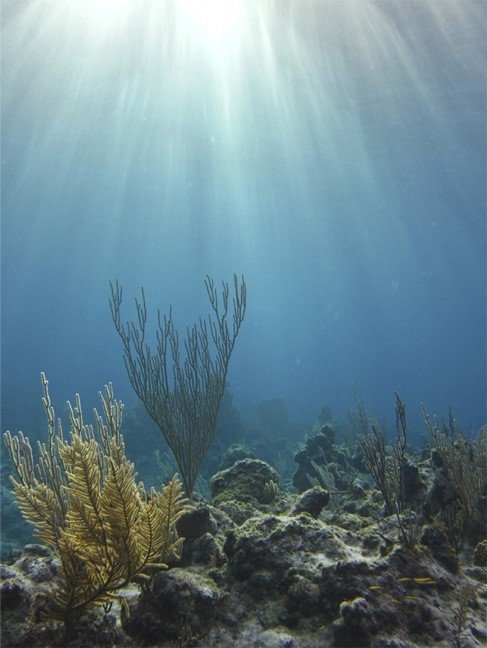 This photo sums up what is so frustrating about dive photography. If this fish’s tail was at just slightly a different angle, this would be a great shot! 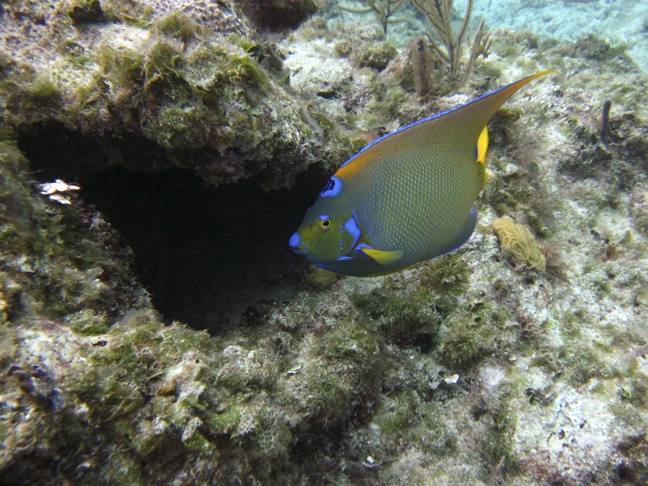 On the way up I snapped this shot of the dingy floating in front of the setting sun. I didn’t think much of it at the time but when I posted it on Facebook it got more comments than any other photo in the album! Now I look at it a little differently. 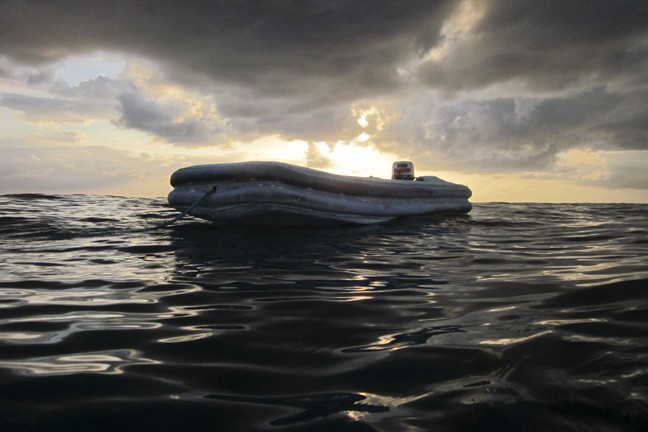 By the time I was watching the sunset I couldn’t believe I had started the day not wanting to get back on the boat. Playing dolphins, an amazing dive, and a breathtaking sunset… I wish I had something clever or funny to say here, but alas, It was just one of those kind of perfect days. 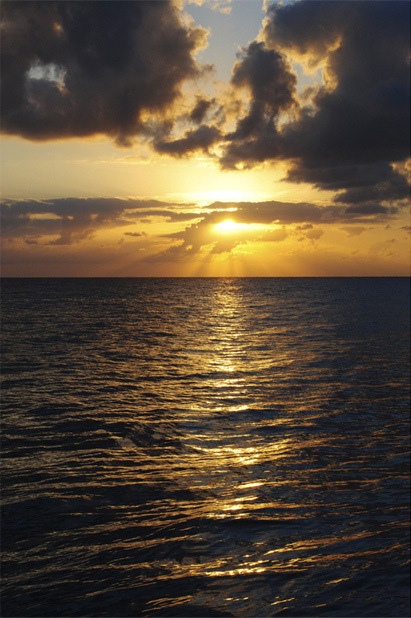 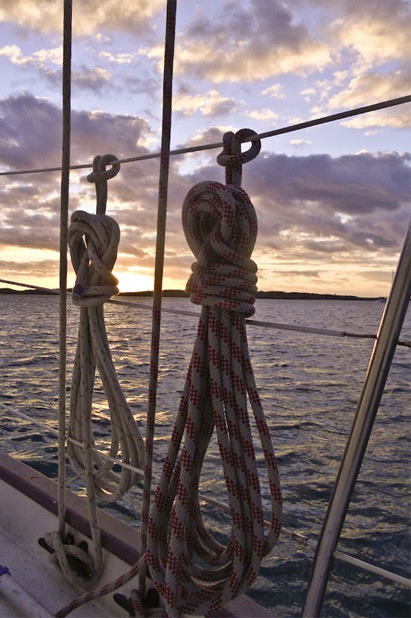 Mermaids Are Real: The Magic of Weeki Wachee

From High Heels to Flip Flops: New Year’s Eve in the Bahamas Bahamas Day 5: Live Every Week Like its Shark Week
5 Comments...