There’s nothing like waking up at sea. We had a big day ahead — scuba diving, iguana stalking, and sunset watching. Watch out, Bahamas. 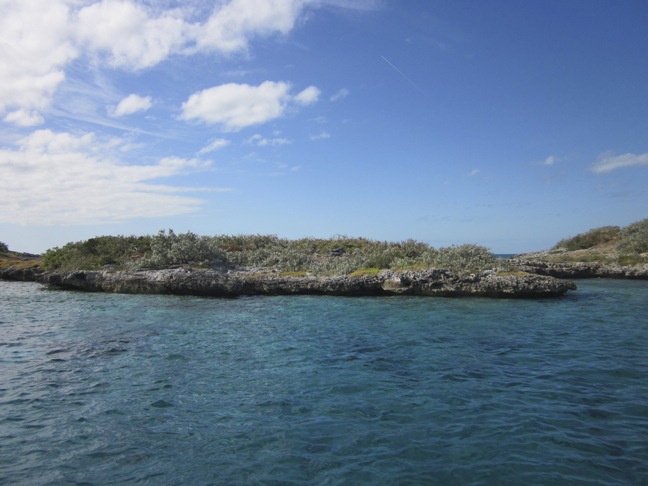 The first dive of the trip was a bright and early morning dive, but I was quickly slapped awake by the freezing ocean hitting my face. The first thing I noticed when I descended was this deceivingly innocent looking lion fish watching Mark do open water checkout dives with a student!

The name of the dive site is “Lobster no Lobster.” Why you ask? Because when the free divers go down, there are lobsters. When they come back up… well I think you can imagine where this is going. 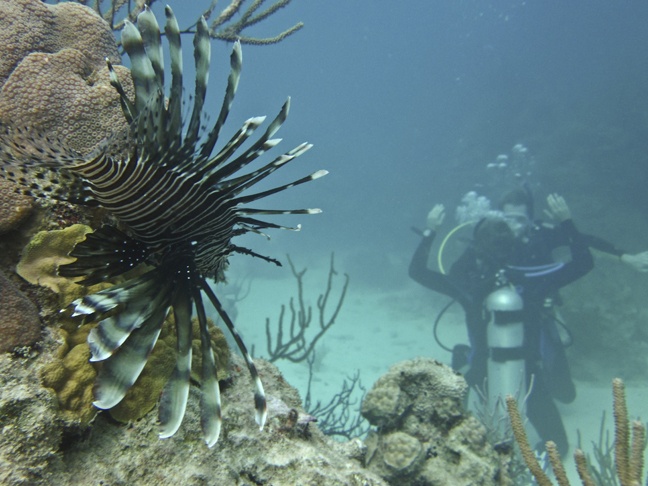 When I first began diving, in Asia, lionfish were an exciting and exotic find. However, in the Caribbean, while still a beautiful sight, spotting lionfish is a sad moment for divers and um, people who like any other kind of fish. They are an incredibly aggressive and invasive species who gobble everything in sight and have no natural predators. How they got to the Caribbean is a story so outrageous you may think it an urban myth, but I have heard it told again and again from Honduras to the Cayman Islands to the Bahamas to such reputable sources as Wikipedia.

“According to U.S. government researchers, the red lionfish was introduced into Florida waters during Hurricane Andrew in 1992 when an aquarium broke and at least six fish spilled into Miami’s Biscayne Bay.”

Isn’t that insane? And its no joke — some scientists list these little buggers among the top 15 threats to global diversity. The ocean community (I’m picturing a bunch of mermaids as I type that) is fighting back on all fronts: governments are placing bounties to encourage out of work fisherman to hunt for them and  licensing local divemasters to bring spears out and kill them while leading dives. While we were in Roatan our divemaster speared six on one dive! In Cayman, Mark and our diver buddies tried to coax groupers to eat the dead lionfish, hoping they would get a taste for them. But Lionfish can live to 500 feet and humans can only go to about 130, so its easy to feel hopeless in this battle. 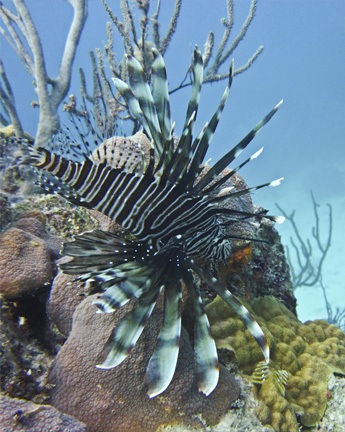 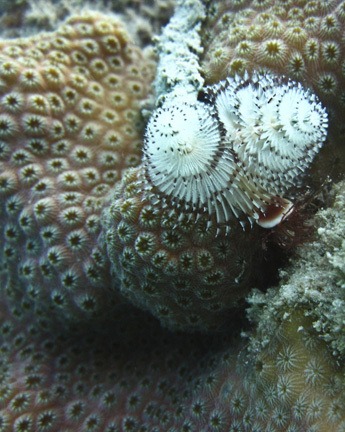 Whew. That got a little dark for fish pictures, didn’t it? Fear not, the Nassau Grouper pictured below is like a puppy dog. Seriously, I’ve seen videos of divers petting them! Oh and um, sorry to bring this up, but they are seriously overfished and in danger of becoming extinct. 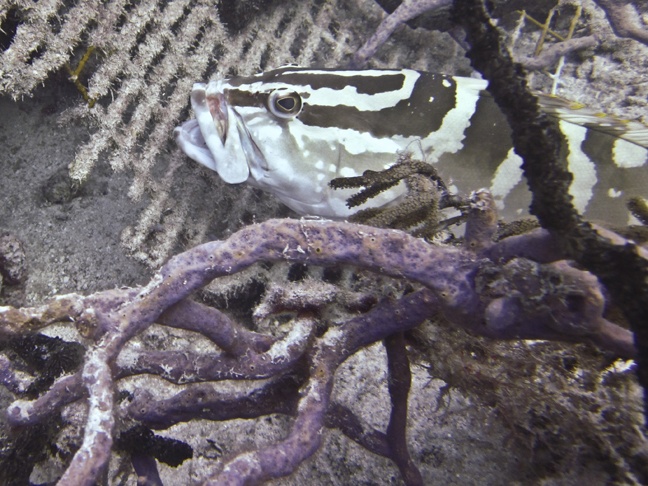 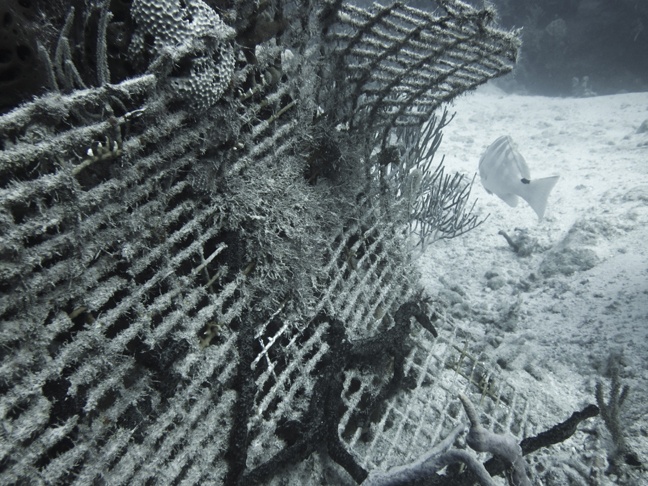 Diving is coming off as a bit depressing here, isn’t it! I’m not even going to mention that the Flamingo Tongue Snail below is becoming rare due to the fact that many snorkelers and even divers believe that it is a shell rather than a living organism and decide to bring it home. Whoops… too late! Truly though, I can see why someone would want to look at this little guy all day. These are one of my favorite ocean creatures; I just can not get over the fact that such a striking, boldly graphic pattern exists in nature. 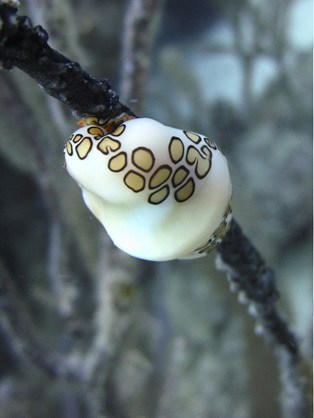 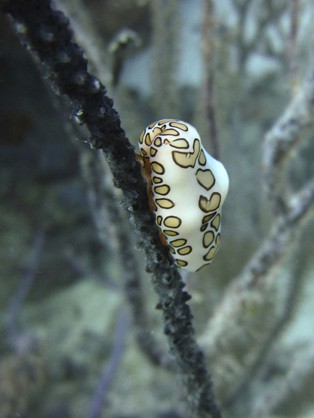 While I was happy with the photos above it wasn’t the greatest dive site and my tolerance for cold water was waning so I headed up pretty early. Despite that it felt great to be back in the water! But after that curel 7am wakeup call and a very cold dive I was happy to sit out the second to warm up.

The captain soon announced we would be making an island stop — to Allan’s Cay, at the northern tip of the Exuma Cays chain. Allan’s Cay is one of three islands in Exuma (Allan’s Cay, Southern Allan’s Cay, and Leaf Cay) that hold the rare Exuma iguana. They are found nowhere else on earth and are considered to be among the world’s most endangered lizards. They can also be huge, with the potential to reach as much as 24 pounds and live to 80 years. This blog is no stranger to iguanas — I’ve documented my obsession with them several times before. 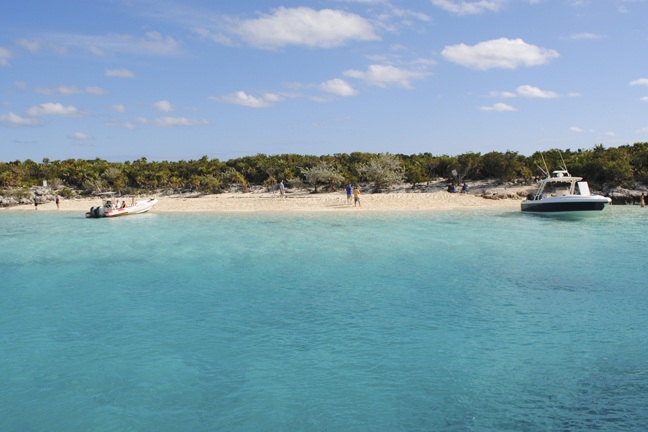 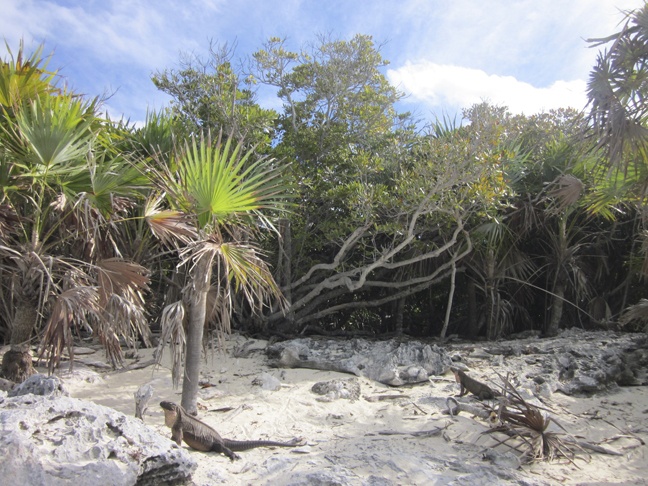 It had been only slightly less than 24 hours but already I was a bit excited to be on land. We took the dinghy to the beach and without the wind from the moving boat I felt Caribbean heat for the first time on the trip! According to Mark there were less iguanas than usual but luckily we came armed with grapes to lure them out of the bushes. I noticed they are kind of reddish in color but otherwise very similar to the Caymanian blue iguana. 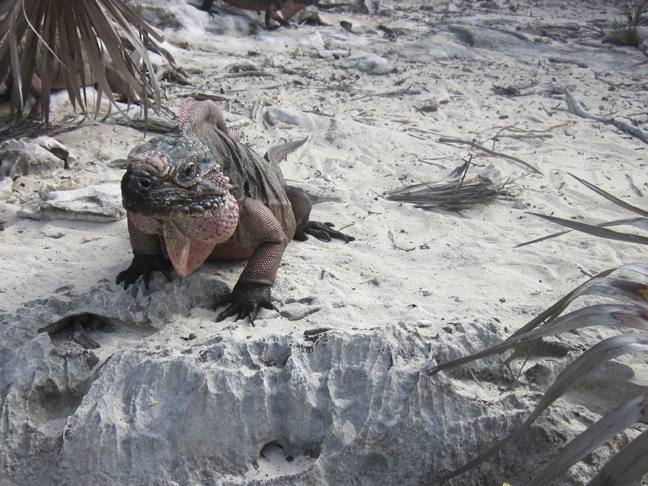 We put the grapes on sticks and the iguanas darted around nervously. Some were bold and climbed right up people’s outstretched arms and legs while others lingered in the shadows. Mark chose a very unique feeding method. 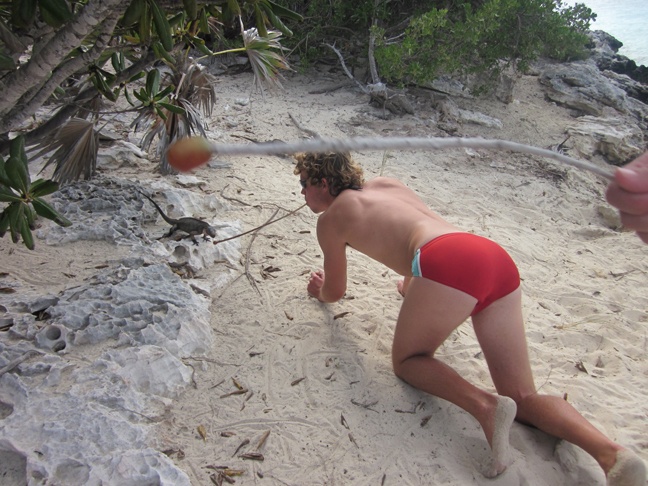 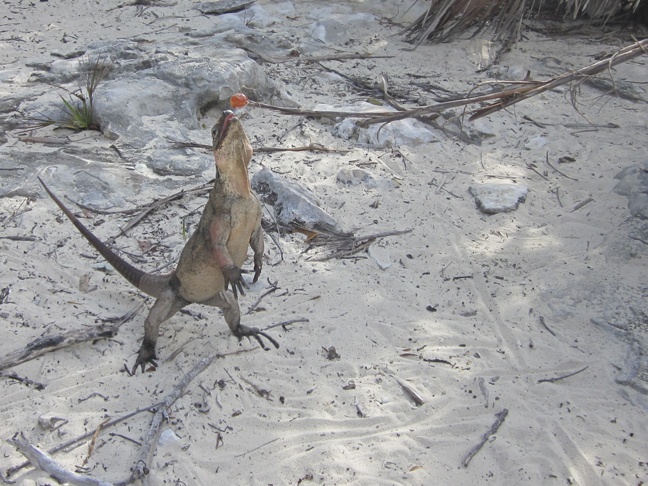 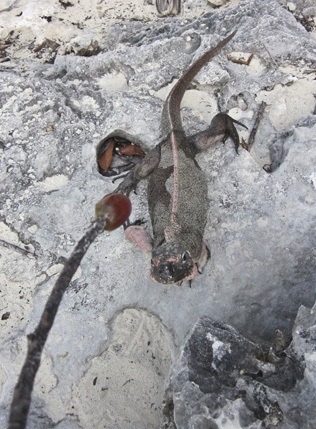 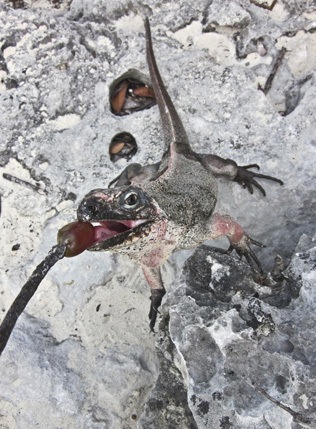 I was in heaven running around taking photos and playing with animals. I would have been content to lay on the beach the rest of the day but this is a diving trip and soon the captain called us back. I was actually a bit sad to get back on the boat. But who would want to leave a scene like this? 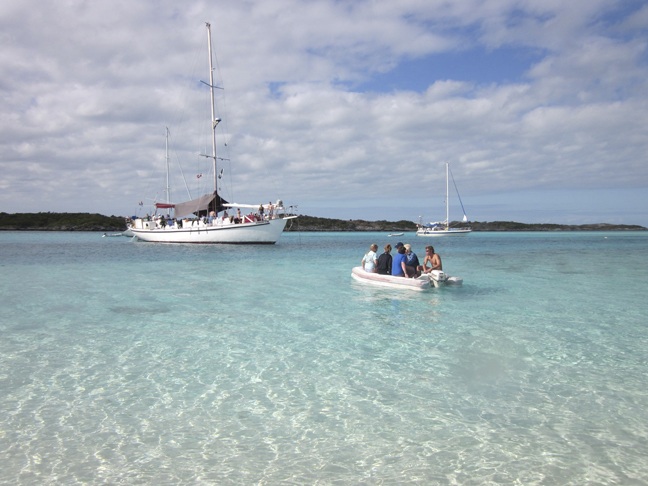 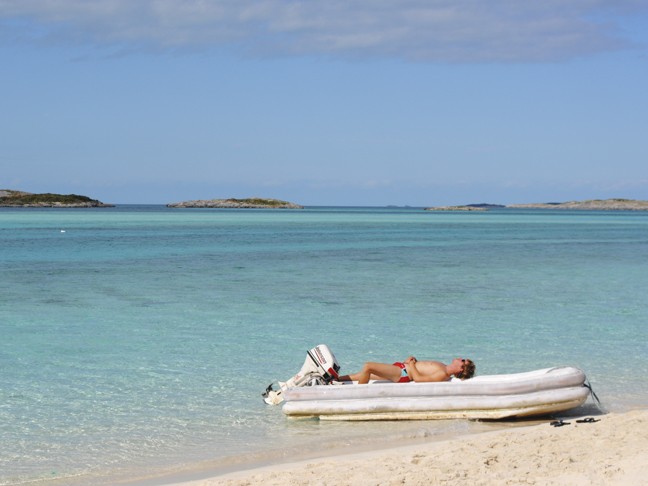 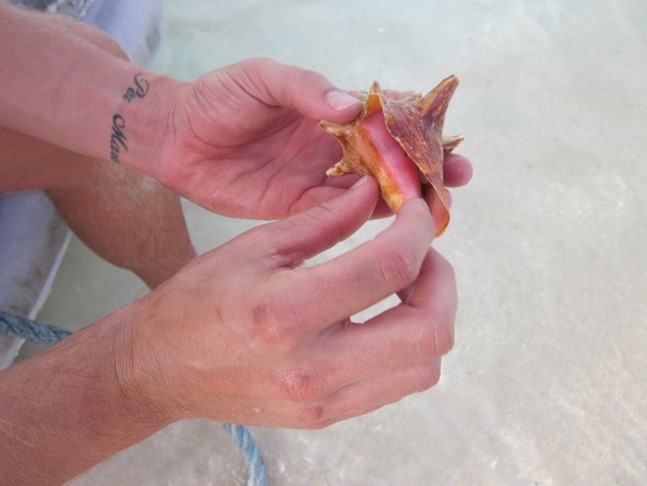 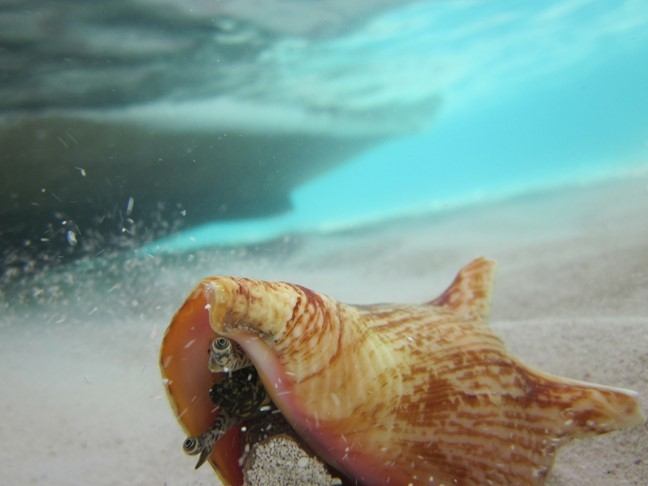 So named for its avenues of coral, this dive site is another shallow dive near an island. Its not a bad dive, but I went with another girl who has just been certified and realize that meant I’m on my own with navigation, my biggest weakness. We found our way back to the boat but I was so nervous I barely enjoyed it. I really, really need to work on that if I don’t want to end up all Open Water.

The little guy below hanging out in the amazing coral formation is a member of the damselfish family. They are harmless but super territorial and become very agitated and nervous when you get close, like I did to get this shot. He kept swimming right up and bopping my mask! These are one of my favorite fish to observe as they are just such uptight little busybodies. Great personalities. 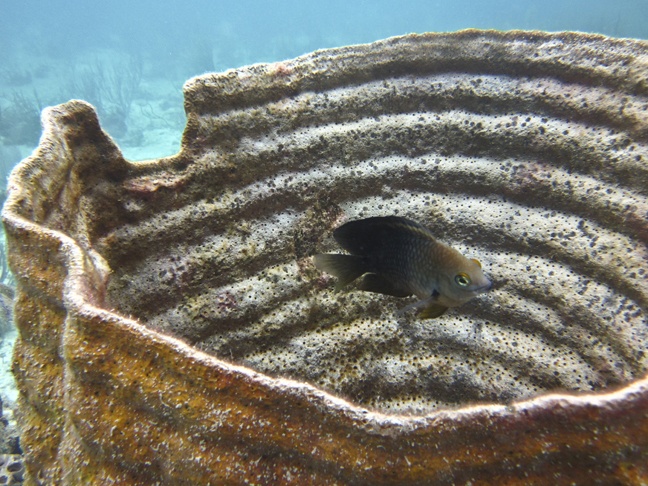 Luckily for those of you who would rather be drowned than read another paragraph about marine life, I cannot for anything remember the name of this fish! Mark identified it after the dive but it went in one ear and out the other. 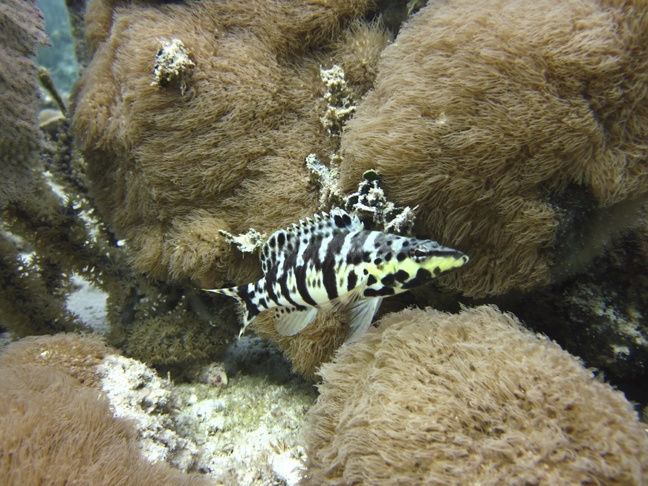 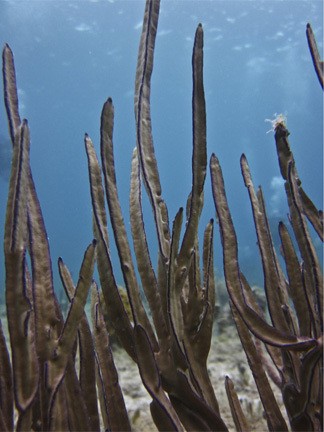 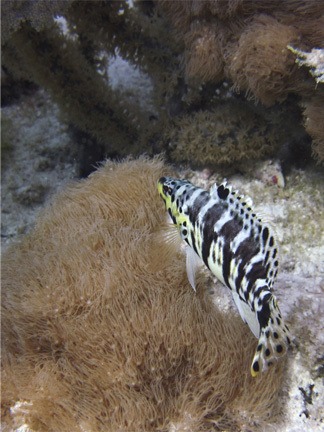 Mark is actually the true fish expert in this relationship, but it seems from this excessively wordy post that I have picked up a thing or two in two years of dive briefings! If you made it this far, I applaud you. In fact, Are you still awake? Did you learn anything interesting? Thanks for indulging my fish-o-philia!

Fellow pixel hoarders will be proud to know, these are the only pictures I saved of both of these dives. Considering I used to store about 30-60 per dive (you never know when National Geographic will be in desperate need of a blurry, out of focus picture of sand!) that is a pretty huge accomplishment. And for those of you who didn’t know, digital hoarding is just as real as the hoarding of any of those ladies on Oprah with newspapers from 1987 blocking the toilet.

I established a pattern for the trip on this day, doing every other dive and giving myself time to enjoy the boat in between. Lucky for me I’ve got insider tips from the divemaster on which ones are must do’s!

Becoming a Divemaster: The Who, What, Where, When and Why

Scuba and the Sphinx: Back to School

Bahamas Day 1: What Is A Liveaboard? Bahamas Day 3: Fish Above and Below the Surface
0 Comments...