New Year’s Eve is so hit or miss. You can’t just have an pretty good New Year’s Eve, can you? You’re either in your own personal sequel to The Hangover, sipping liquid silver and snorting pure gold in a stretch limo chartered by Kanye, or sobbing in the fetal position alone in a corner, confident in the knowledge that everyone on planet earth is having more fun than you.

Um, no, I actually have never once been accused of using hyperbole in my writing. Why would you even ask that? Anyway, you know what I mean. New Year’s Eve is the one holiday sure to put a knot in my stomach, wondering if its going to be one of the good years or one of the bad ones. 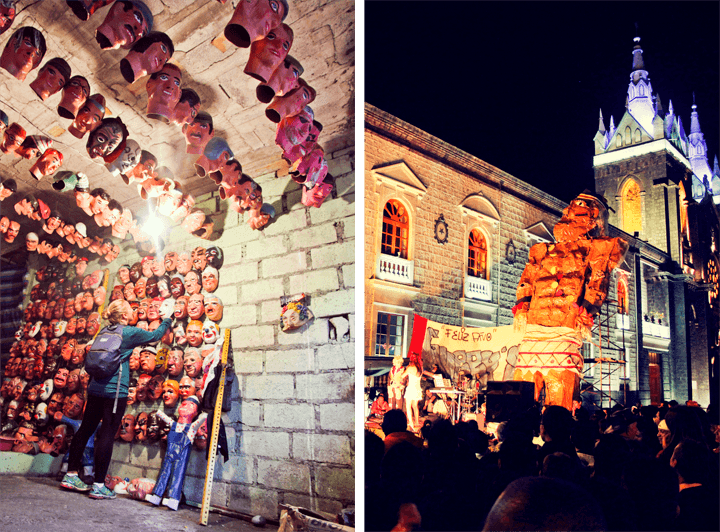 This was one of the good years.

While not a single flake of pure gold was snorted, we rang in the New Year filled with all kinds of warm fuzzies. The mountain town of Baños was the perfect location — lively enough to party all night, laid back enough that I wore my Keds, and absolutely bursting with fascinating tradition.

We arrived in Ecuador on the 21st of December, and already the country was gearing up to welcome 2014. In each city we visited, we found families and communities hard at work on various sized effigies made of paper mache, straw, newspaper, and brightly colored paint. We soon learned that these beautiful creations wouldn’t last long — on December 31st, they’d be ceremonially burned in a a raucous street party sure to strike fear in the hearts of fire safety code inspectors everywhere. While the execution is pure party, the symbolism goes much deeper — the burning represents a spiritual cleansing of the ills and evils of the año viejo. 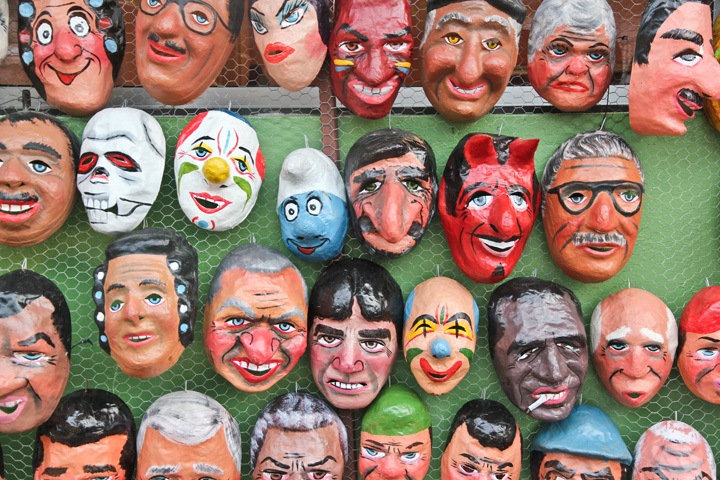 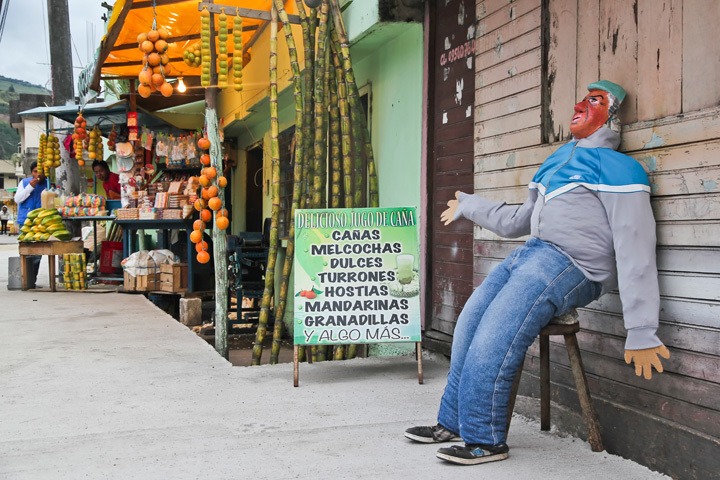 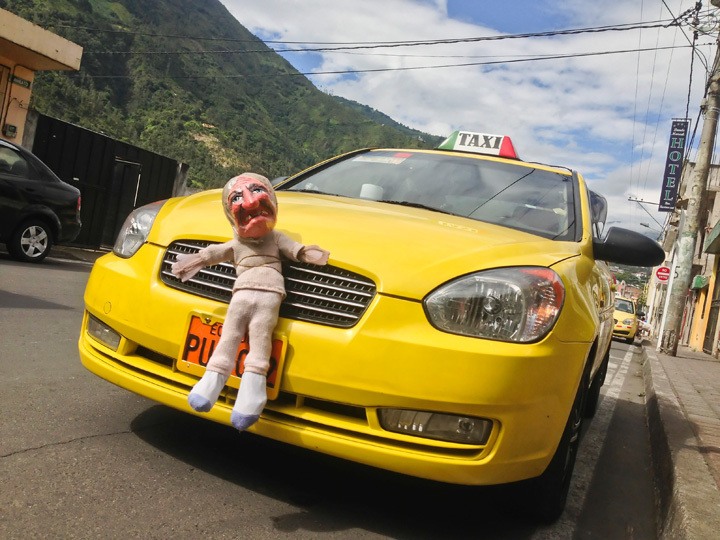 We excitedly purchased masks of our own as soon as we reached Baños. The price of getting in on the fun? A whopping $2.50 each. While Anders went for the devious sailor look, I chose to ring in 2014 as a stoned cow. It was a far cry from the little black dress and stilettos of New Year’s Eve past, I’d say. 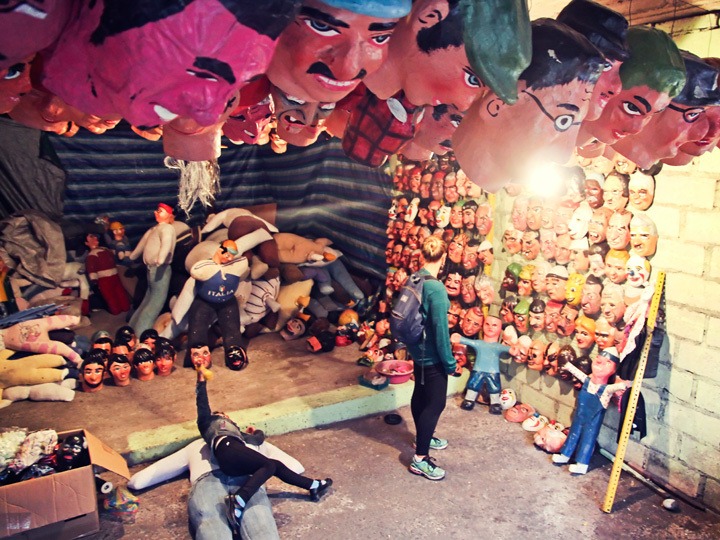 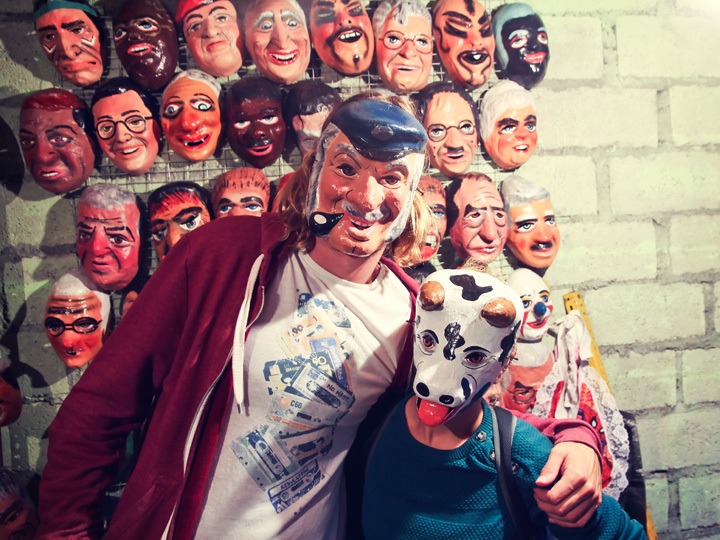 On December 31st we woke up to beautiful weather and decided to go for a bike ride that brought us far out of town. When we hitched a lift back into Baños, we stumbled upon yet another special Ecuadorian New Year tradition — one I regret to say I don’t have a single photo of. Several times along the road, our truck — and every other vehicle on the road — was stopped by a merry band of cross-dressers demanding donations. We were baffled and our inquiries with locals were met with a shrug and a simple, “it’s tradition.”

A bit of research revealed a slightly more nuanced explanation — in the days leading up to New Year’s Eve, it is tradition for some Ecuadorian men to dress as female vuidas, or widows, of the past year. They represent the wives of the effigies being burned later in the evening. Quirkily charming in theory, but in practice the human toll booths they create by blocking the streets with wild dance parties are basically to raise beer money for the wild night ahead. 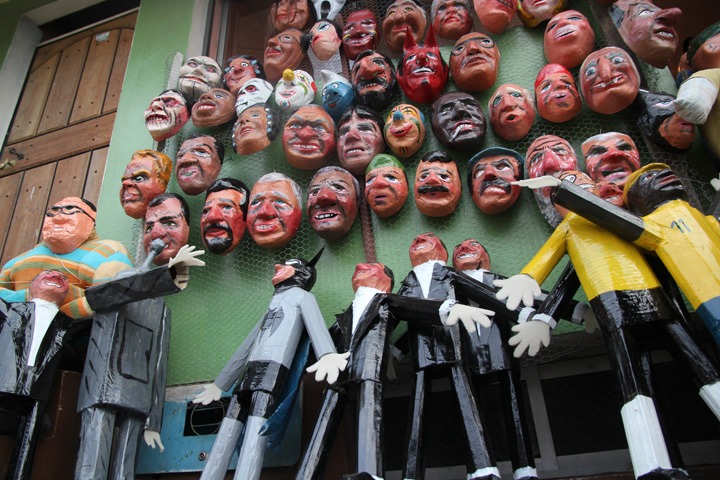 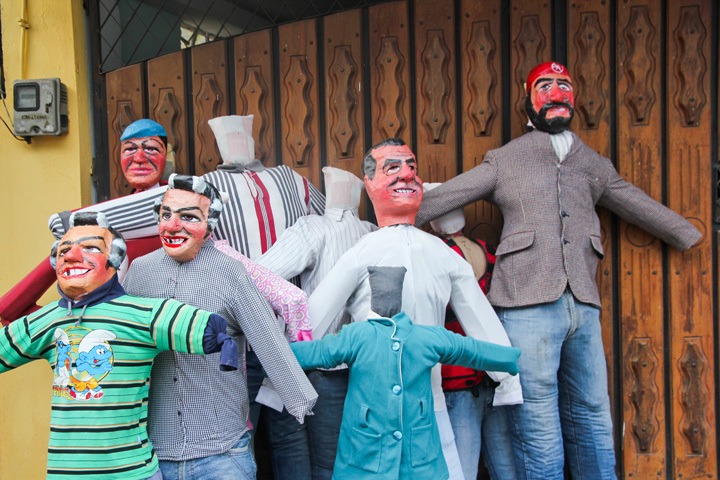 Festivities started early when the big night finally arrived. As soon as the sun set we hit the streets, dodging homemade fireworks, frisky vuidas, and costumed children trick-or-treating for spare change. It was complete sensory overload — and I loved it. Luckily our hostel was very centrally located and so we popped back a few times in the earlier hours to escape the madness for a moment and have a quiet drink in the bar.

But in the final hour before midnight, all bets were off. 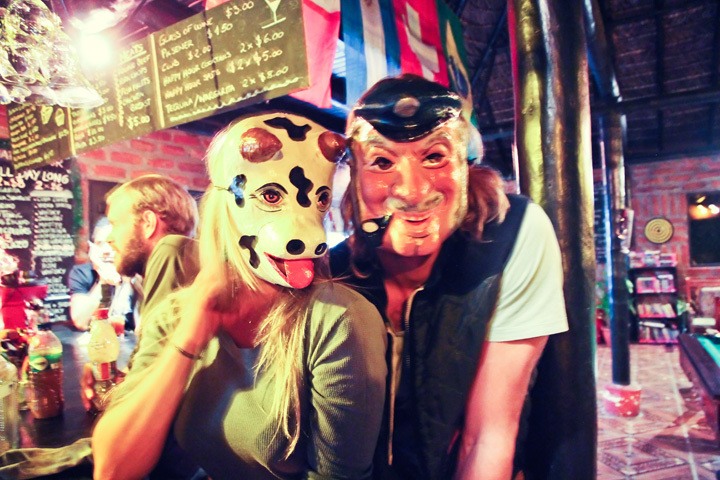 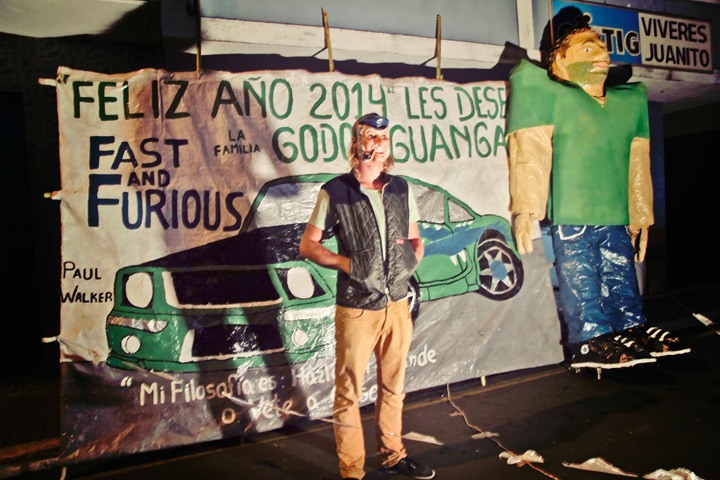 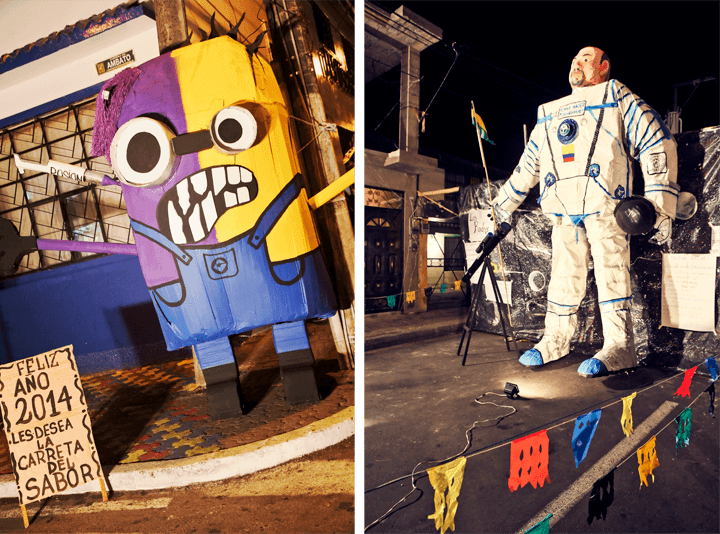 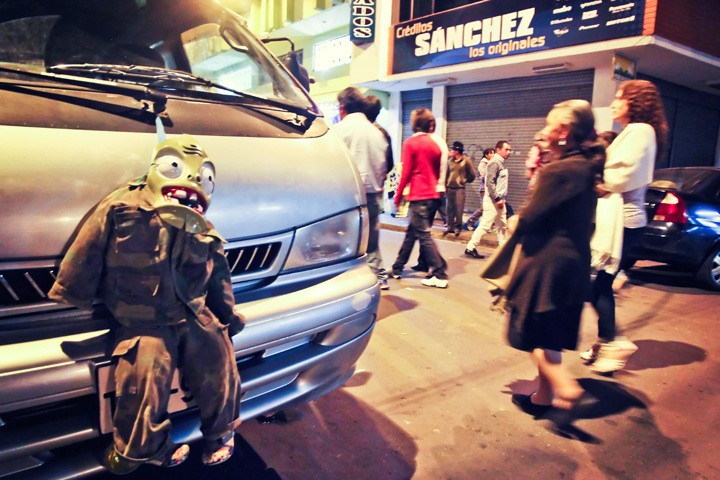 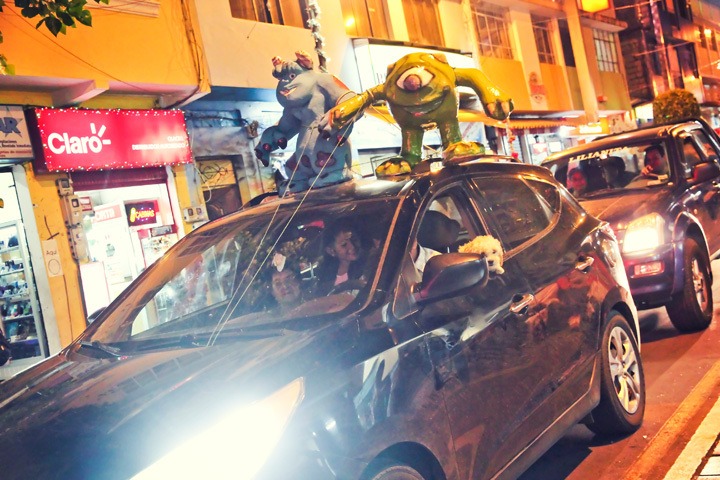 As the clock raced towards midnight, firecrackers started popping off by the second and smoke filled the air as the throbbing crowd cheered for their beautiful creations burning in the streets. Reluctantly, we popped off our masks and sacrificed them to the flames. We stopped for a moment to watch them burn before returning to dance party happening all around us.

Pure elation — and a little bit of booze — coursed through my veins. There was nowhere else I would have rather been in that moment. 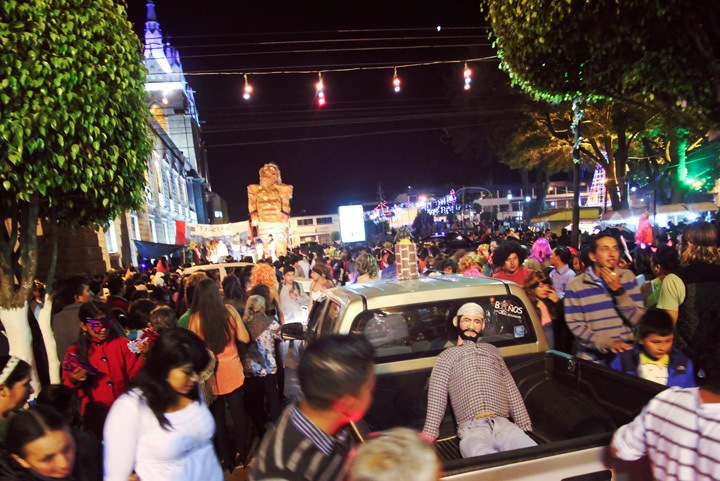 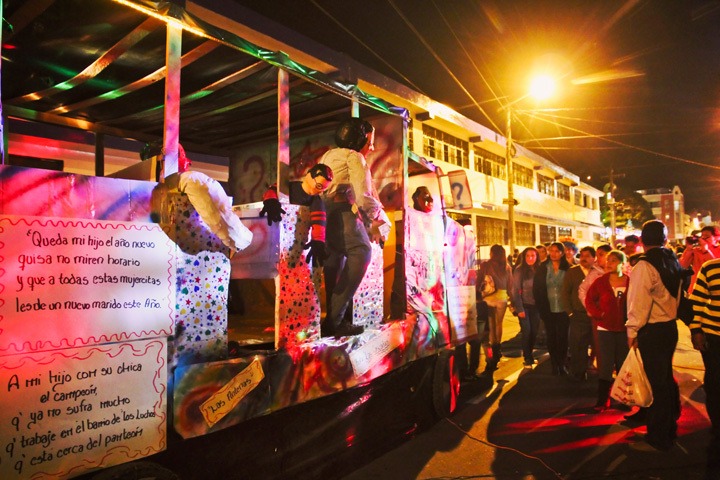 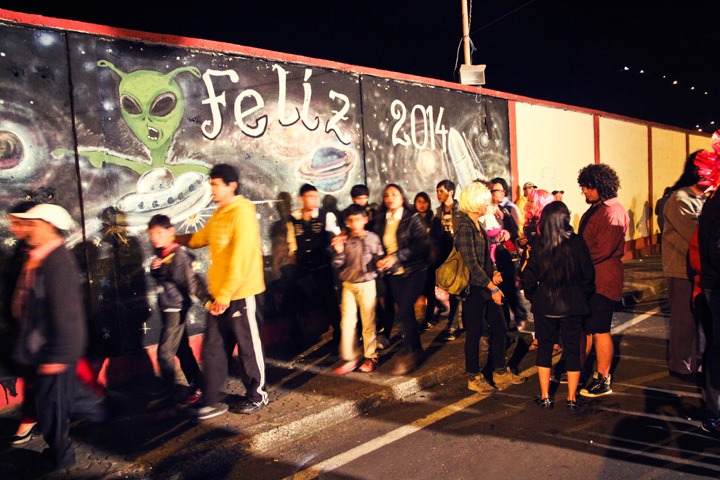 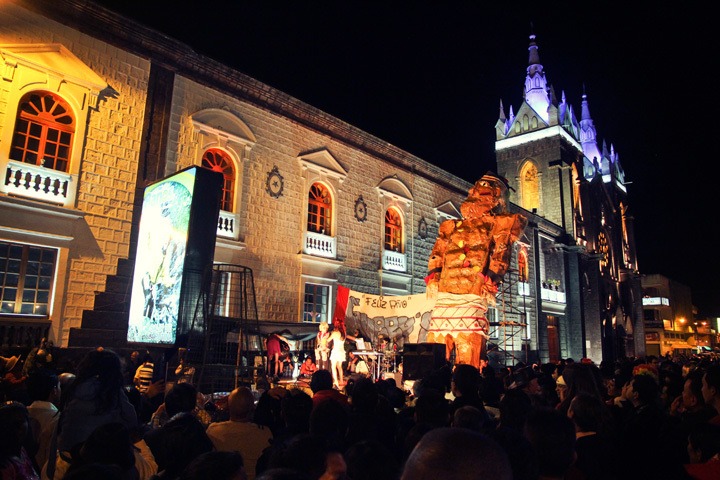 Eventually, we followed the natural progression off the street and into Baños’ small nightlclub district, where locals and travelers danced the night away side by side (and, amazingly, sans cover charge!) While it was the perfect end to the evening, I’ll always remember the New Year’s Eve in Ecuador out on the streets, at the world’s best block party. 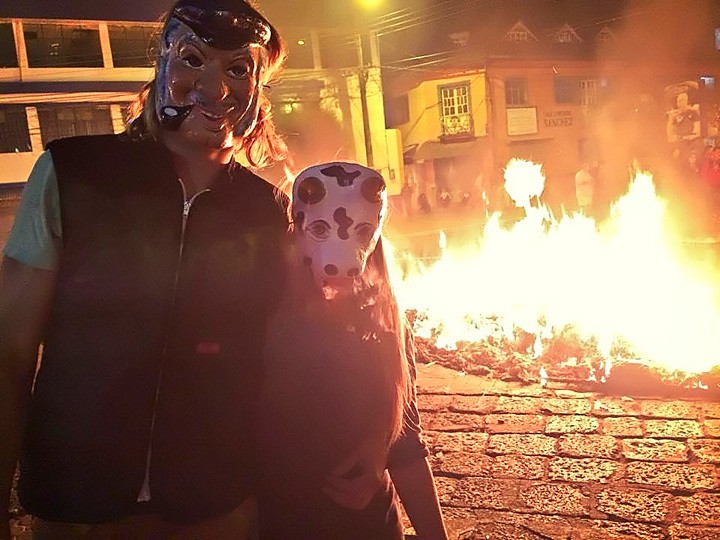 Where in the world have you spent New Year’s Eve?

Saying Ciao to Ecuador in Cuenca