“In the modern era, the banana — literally — has destroyed nations and ruined lives.” I am often mocked by my traveling companions for my love of all things banana. Banana smoothies, banana pancakes, banana milk, banana yogurt, banana cake, banana bread, banana candies, and oh yes, plain old bananas. Yet before reading this book, I knew very little about my favorite snack. I’ve long believed in bananas as a cure for motion sickness (a method taught to me by sympathetic Thais on a brutal ferry crossing) and on a particularly bumpy ride through the Philippine countryside I hopped out of the jeepney and stumbled into a roadside shop in search of some. Finding nothing but crackers and cookies for sale, I desperately asked the shopgirl if she had any bananas. “Which kind?” she asked. “A yellow one!” I replied, confused and exasperated.

After reading Banana: The Fate of the Fruit That Changed the World, I know better.

Technically this book is stretching the “travel” category and leans more towards non-fiction, but in my defense I did buy it at Idlewild, New York City’s famous travel bookstore.

Banana: The Fate of the Fruit That Changed the World will make you look at the world’s most familiar fruit in a completely new way. It follows the history of the banana’s spread around the globe, its rising popularity in the US, and the havoc that popularity would wreak across Central American nations and other so-called Banana Republics. This historical background is sprinkled with scenes of the present day, as unstoppable diseases tear through the world’s banana crops to the dismay of helpless farmers, scientists and researchers. It is a story of suicide and genocide, history and science, lush tropical jungles and highrise corporate boardrooms. Bananas are the most eaten, adored, and desperately needed fruit on earth. They keep hundreds of millions of people alive. They’ve also destroyed countless lives and been the axis in a seemingly endless cycle of violence, exploitation, and terror.

I found myself furiously underlining facts throughout Banana that I’m still repeating to anyone who will listen. Tell me you aren’t amazed by the following?

• Biblical scholars have recently found that in some ancient translations of the Bible, the “apple” that tempts Eve in the Garden of Eden is in fact the more appropriate and sexually suggestive banana.

• Bananas are the world’s largest fruit crop and the fourth-largest product grown overall, after wheat, rice, and corn.

• In India, the banana is used as a substitute for tomatoes in ketchup.

• Bananas led to the overthrow of Guatemala’s first democratically elected government in the 1950s.

• In the 1970’s, the chairman of Chiquita threw himself out of the window of his Manhattan office after the extent of his company’s political maneuverings were exposed.

• As recently as 1991, the Honduran military (with close ties to the US) killed workers who walked off the job to strike.

I was horrified but fascinated to read of the US banana moguls’ and the US government’s interference in the affairs of the so-called banana republics, and found this to be the book’s most interesting aspect. The true story of the Guatemala coup of 1954 in particular would make the current screenwriters for the political melodrama Scandal — in which the Vice President murders her own husband and the President steals the election — say, “Hm, okay, people aren’t going to buy this. We’ve taken it too far.” The deposed Guatemalan leader Arbenz explains his situation more eloquently than I could ever hope to: “The banana magnates… rebelled against the audacity of a Central American president who gave his fellow citizens a legal equality with [the banana magnates].” As I’m currently working my way through The Motorcycle Diaries, I also found this incidents’ overlap in the two books interesting — the Guatemalan coup is famously witnessed by Ernesto “Che” Guevera and had an enormous influence on his future radicalism. 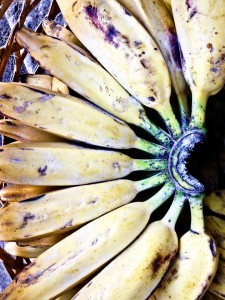 As always, I enjoyed reading about destinations I’ve traveled to, including La Ceiba, Honduras — a city that is ground zero to the world’s banana industry (something I had a pretty amusingly naive view on back when I visited in 2010.)

I love when I read or watch something so powerful it helps me make a change in my life. I never considered buying organic bananas to be important — they’re often listed as a food that is “safe” to save money on and buy non-organic, thanks to their thick skin. Yet the author convinced me that fair trade, organic bananas are worthwhile — if not for the consumers than for the long-exploited workers getting them from plantation to kitchens.

Koeppel also makes an interesting and strong argument for genetically modified bananas, explaining his position that it is surely the only solution to the world’s current banana disease crisis. “The banana has changed the world, but for all practical purposes, it can’t change itself, and it has so far not cooperated with human efforts to make it turn a new leaf.”

At times, the book became a  bit bogged down with details about banana genetics, the growing process, and the science behind the diseases currently destroying bananas around the world. However, science was always my worst subject and I’m undoubtedly the kind of girl to prefer reading about economics, politics and marketing instead.

While this is no fault of the author, I didn’t love that this book made me feel so guilty about consuming one of my favorite foods! Perhaps I slept my way through too many history classes, but I was blown away to learn of the devastating impact this yellow fruit has had on the lives of people all over the globe.

Banana lovers, history enthusiasts, those interested in the ethical food movement and travelers heading to countries heavily influenced by the banana (Honduras, Guatemala, Costa Rica, Ecuador, Colombia, Malaysia, Indonesia, Hawaii, Jamaica, Puerto Rico…. and on and on and on.)

Today I’m giving away a brand new hard cover copy of Banana: The Fate of the Fruit That Changed the World to one of you! Think of it as a virtual free bookshelf at your favorite hostel. Readers from all countries are welcome to enter.

The giveaway copy of this book has been provided to me, at my request, by the publisher. The link in these posts are Amazon Affiliate links, and I will earn a small commission from any resulting purchases.

Finding the Essence of Ecuador Bringing in the New Year Baños Style
29 Comments...