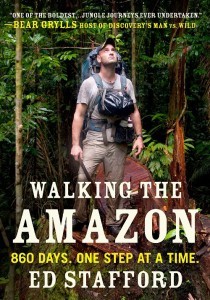 “Here we go again. I was somewhat vexed by the inconsiderate Indians coming to kill me. Didn’t they realize we were pushed for time?”

As this post goes live, I will by floating down the Amazon river — the first leg on what will be more than two months in Peru. While that might sound like an adventure to some, Ed Stafford makes my own trip look about as intrepid as braving an iPhone release line at the Mac store. Yup, Stafford went and really showed us all up — this guy walked the entire length of the Amazon, starting at the Pacific ocean in Peru and ending 860 days later at the Atlantic Ocean in Brazil. What a show off, right? Walking the Amazon

Walking the Amazon is a first person account of the author’s journey. He kept comprehensive journals and records of the trip, allowing for very detailed accounts of events that happened years earlier — in this way, the book feels almost like a blog. The expedition would take the author through Peru, Colombia and Brazil over the course of almost three years. The rules were strict — this would be a man-powered journey. No boats, buses, or wind-in-the-sails allowed.

Stafford is joined and jilted by expedition partners, local guides, lovers and journalists along the way, though most come and go in a matter of days or weeks and he is the only one to complete the journey in full. His most loyal companion is a local guide named Cho who he picks up in Peru, and who is there alongside him on his victorious leap into the Atlantic Ocean.

Along the way, the author and his companions face all the physical challenges you’d expect of such an expedition — injury, illness, failed equipment and limited resources. But they also encounter less obvious challenges — isolation, visa problems and red tape, boredom, dangerous encounters with uncontacted tribes, budget woes, and cultural biases against foreigners.

On a superficial level, I loved when Stafford’s route took him through destinations I myself am headed to, such as the Colca Canyon. I marveled when he skipped Machu Picchu due to money issues and laughed when he called Iquitos a “major modern city,” as I’ve been considering my upcoming trip there to be to a remote jungle outpost.

I was fascinated by author’s challenges in traveling through remote Peru. He was widely feared and misunderstood. Over and over again he was taunted with the name pela cara, or face peeler. Supposedly there had been cases of organ traffickers targeting the indigenous tribes in the past, and they now considered any white man to be a baby snatcher and organ stealer. In turn it put him in a dangerous, vulnerable and unpleasant position. The nature of the expedition didn’t allow Stafford to gain trust with a particular community as he was constantly on the move, constantly trying to prove he was not to be suspicious of.

During my own recent trip to the jungles around Iquitos, I was able to ask my tour guide — who grew up in a traditional riverside community — about the whole pela cara situation. His response supported the author’s accounts. Yes, three or four years ago, we were very afraid. We would live three or four families to one house, for protection, and even a light in the distance at night, and we would have our shotguns ready. The planes overhead, they made us nervous. We lived like this for one year, maybe one year and a half. Everyone was very afraid. I asked if he had known anyone who went missing, or had lost an organ. No, he answered. I think it was very big rumor. A rumor that would provide great challenges for Stafford. I felt his emotional exhaustion through this period. In general I felt like I was reading the blog of a friend, in a way — I cried when he finally reached his goal.

The book’s biggest fault is that Stafford is an expeditioner, and not a poet. His writing is pedestrian and at times a bit bland — luckily his subject matter is exciting enough to make up for it. Stafford frequently writes about his mental mind games and the periods of doubt and depression he suffered along the way. I think this clouded his ability to give the colorful descriptions I had hoped for of the setting and cultures he was surrounded by.

Also, as it was one of his stated purposes of the expedition, I was surprised how little information there really was about the plight of the Amazon. I would have liked more background, more call-to-action, and more concrete ways that the readers could do their part to turn things around.

Travelers heading to the Peruvian or Brazilian Amazon, hiking and walking enthusiasts, those fascinated by extreme expeditions of human exploration and personal limit-pushing.

Today I’m giving away a brand new copy to one lucky reader! Think of it as a virtual free bookshelf at your favorite hostel. Readers from all countries are welcome to enter.

The giveaway copy of this book has been provided to me, at my request, by the publisher.

Exploring The Shores of Lake Titicaca

Earning Abroad: Crewing a Liveaboard in The Caribbean Photo of the Week 123
24 Comments...