While I wasn’t ready to invest in kitesurfing lessons just yet (it is on my bucket list!), the Scandis had a grand time testing those waters. What I did enthusiastically sign up for was exploring the vast desert wilderness that is the Paracas National Reserve. There are a few options for exploring the area. (1) You can rent bicycles for $15 each, though you’ll spend the entire day pedaling in the shade-less sun. (2) You can hire a taxi driver to take your group on a three-hour tour for about $20. (3) You can splash out for a three-hour ATV tour for $40 each.

I think you could guess which one we’d go for. 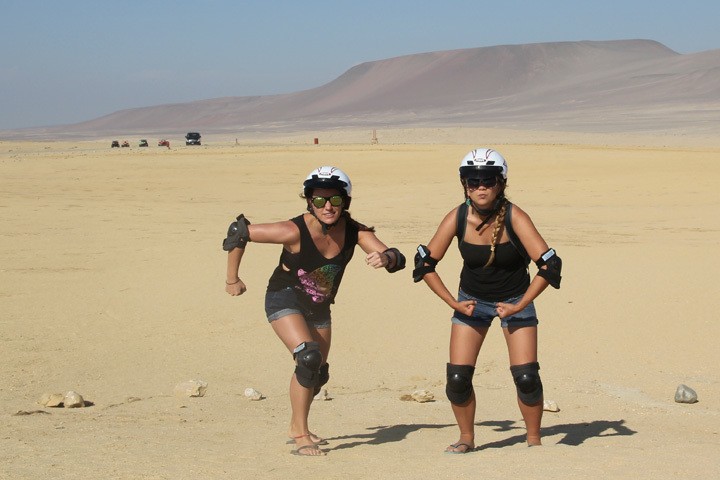 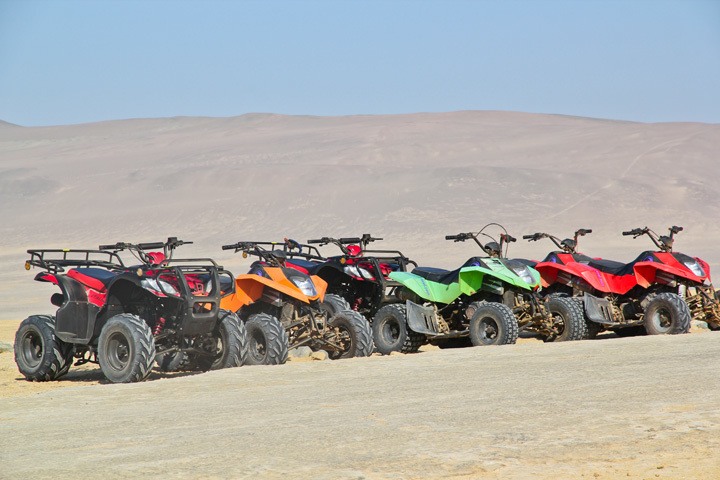 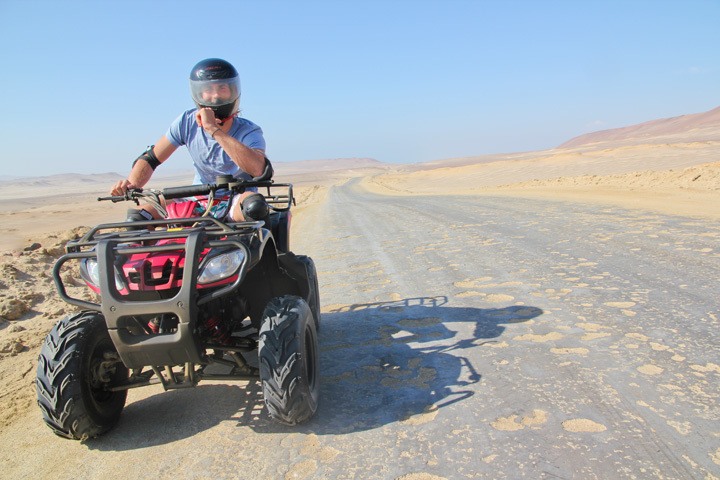 We waited until my friend Leah, who I had met in Arequipa and who was now working at our hostel in Paracas, had a day off. Then our group of five — Leah and I and the three Scandis — revved off into the desert. Our guide was super laid-back but would turn out to be one of the best I had in Peru.

Within moments of taking off I realized this would be nothing like my ATV tour in Hawaii, where we were strictly limited to a speed of no more than twelve miles per hour. Here in Peru, the boys sped off as fast as their ATVs could carry them, with the guide laughing and leading the pack. Leah and I hung towards the back, though we each took turns overtaking the rest of the group eventually. 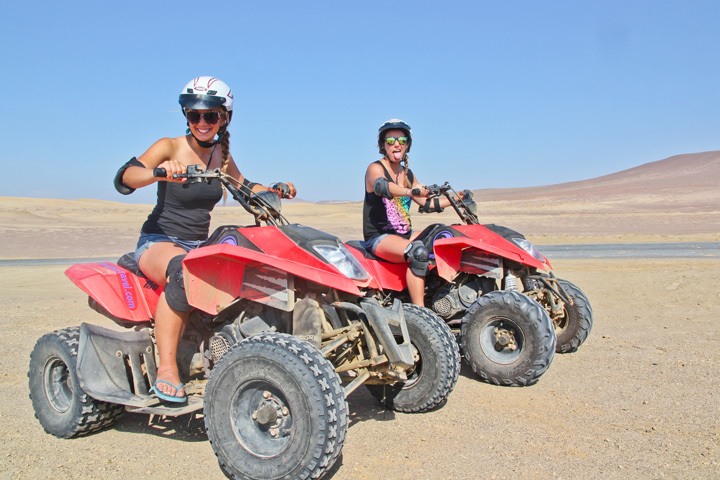 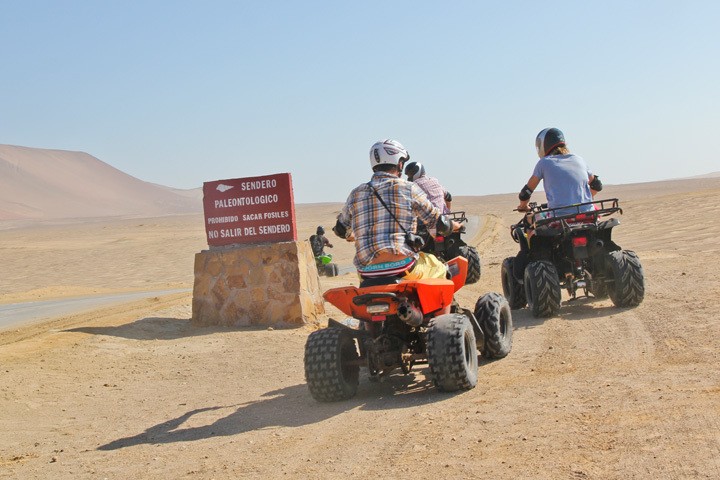 We stopped at various points of interest along the way, pausing to admire faint fossils or sweeping beach vistas. The most famous of all the sea views is La Catedral — or at least it was. This once-regal sea arch, formed over thousands of years, is featured proudly on postercards and posters all across Peru. Too bad it was destroyed in the 2007 earthquake that devastated the region. 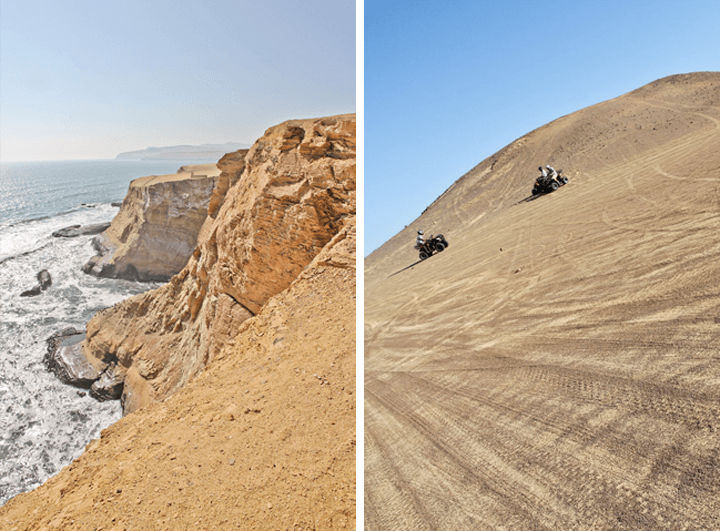 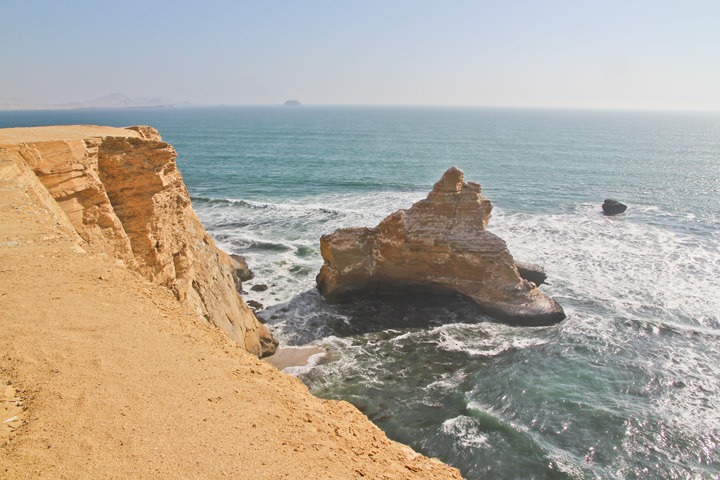 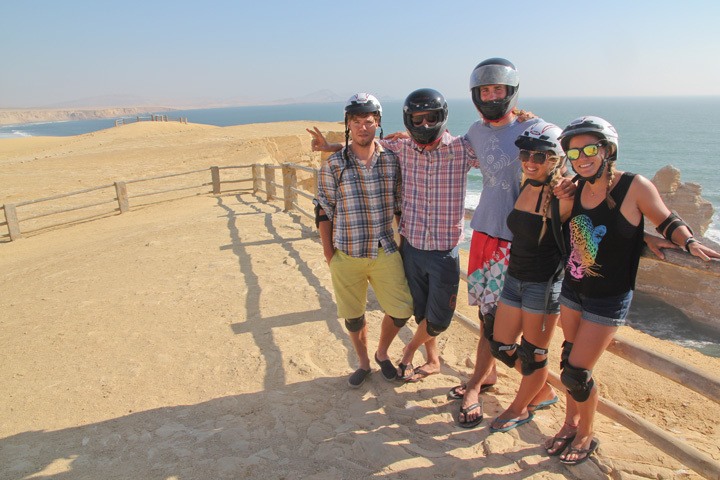 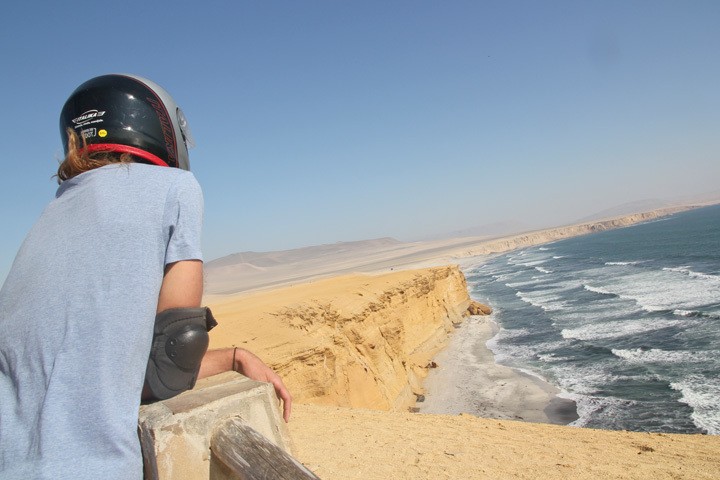 While I admit I’m more of a lush, tropical scenery kind of girl, there was something hauntingly beautiful about driving through this harsh and barren desert. Oh, and one tip to anyone out there hoping to replicate this adventure: don’t make the mistake of thinking harsh sun equals unbearable heat. The wind is whipping here, and along with the breeze created by driving we were absolutely freezing. Bring a long sleeve top! 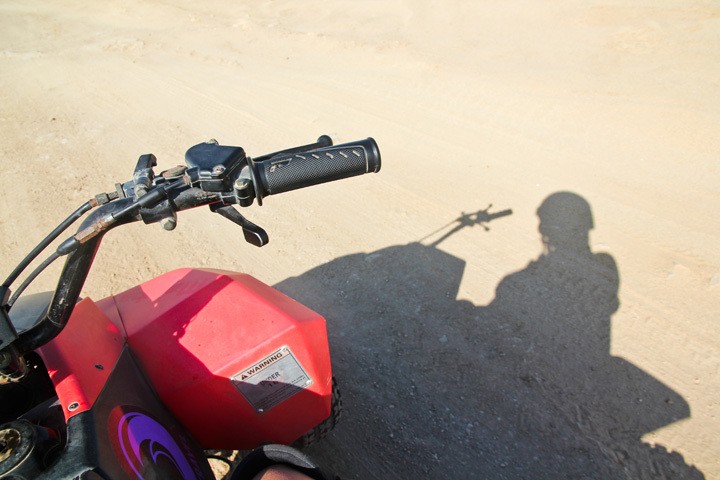 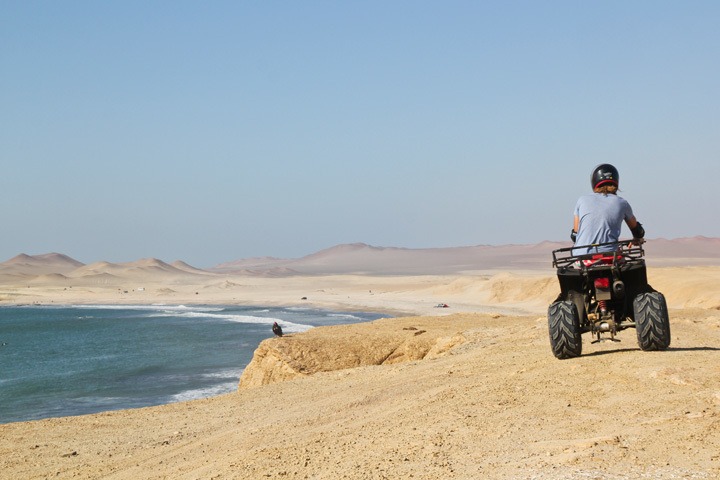 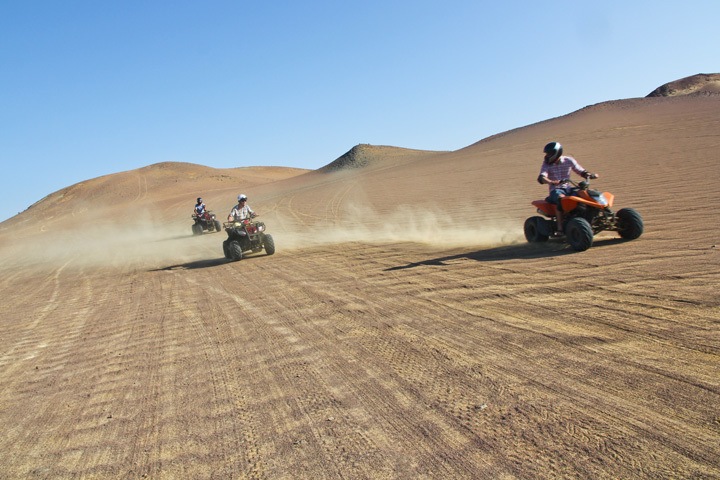 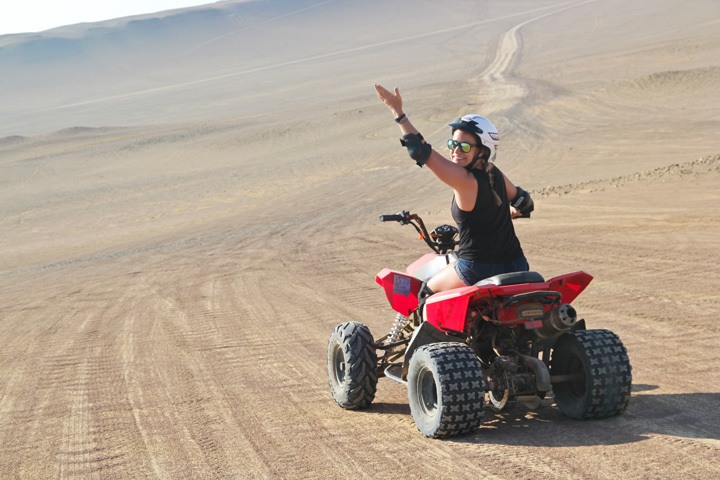 Our tour ended with driving along some of the area’s beautiful and multi-colored beaches, including Peru’s only stretch of red sand. The setting sun was beautiful and inspired — what else? — a series of serious jump shots. 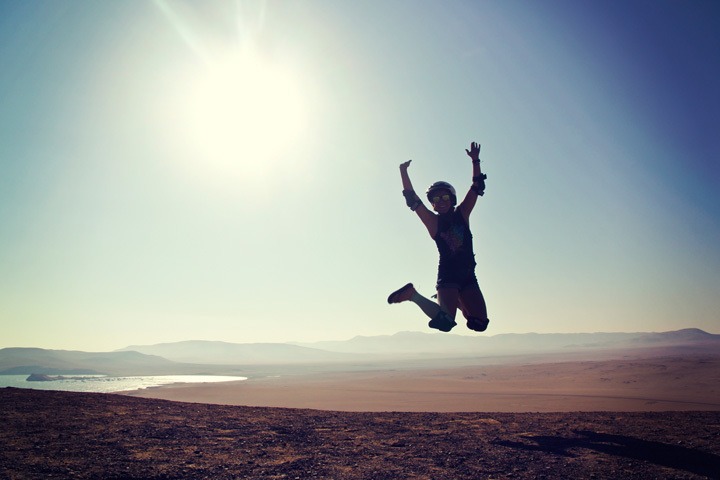 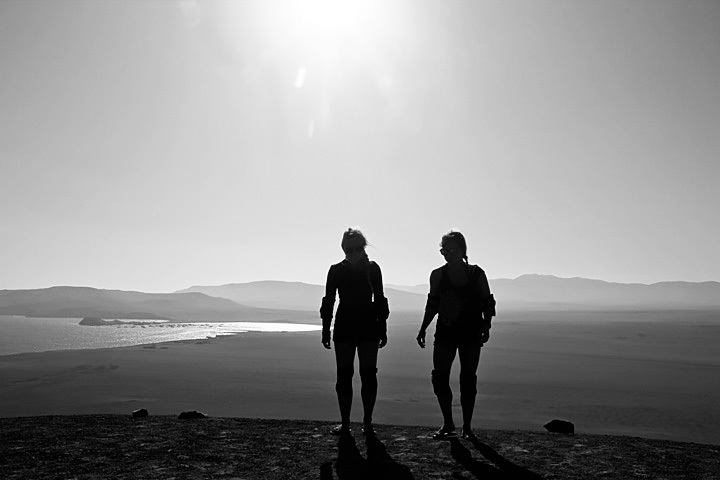 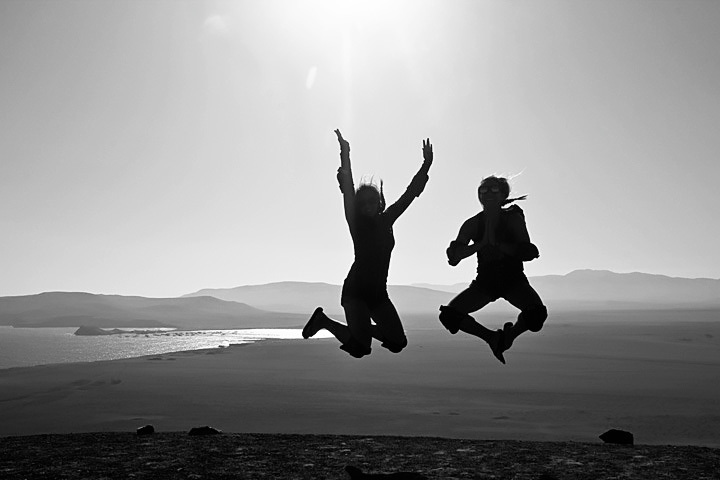 While this was a relatively pricey tour by backpacker standards in Peru, it was worth every sole, just as Paracas was worth the extra days we spent there. Though it was yet another adventure activity to tick off in a country that has seemingly endless amounts of them, ATV riding through the Paracas National Reserve was a fantastically unique experience. 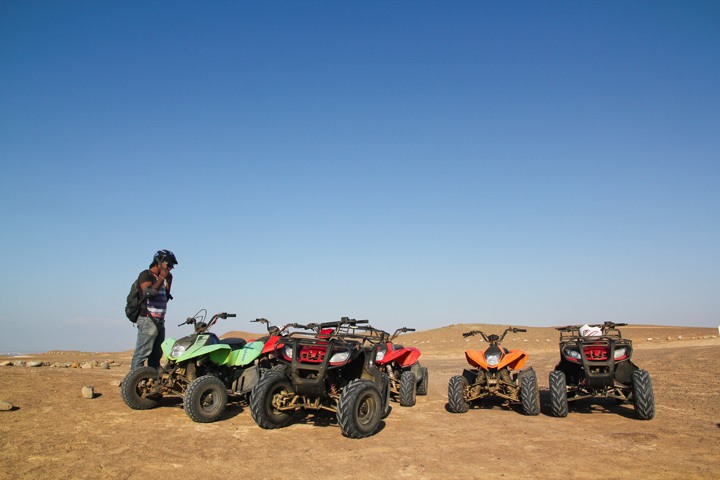 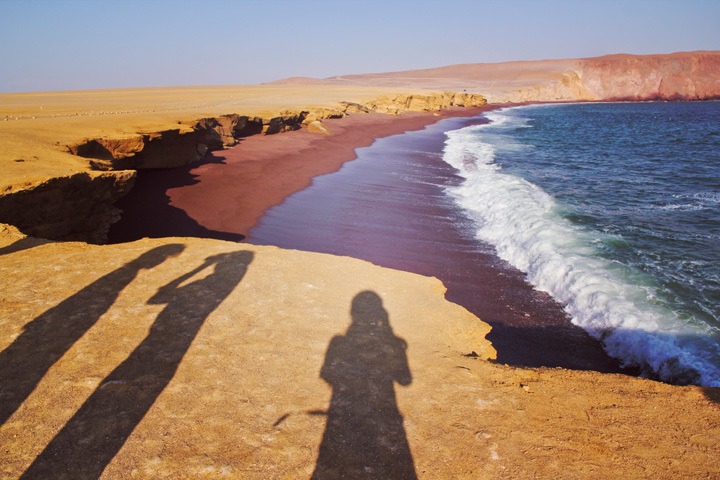 As usual, Anders made a badass video of our time on the South Coast, including footage from Huacachina, The Ballestas Islands, and the Paracas National Reserve. I love it!

Have you been ATV riding? Where?

The Sights of Vientiane

Photo of the Week 133 Falling for Lima… The Second Time Around
23 Comments...