After my recent experience with snowmobiling in Iceland, I was starting to think that maybe piloting motorized vehicles at fast speeds was not the vacation activity for me. But then Wim asked Heather and me if we wanted to go on an ATV tour in Hawaii, and being a Yes Girl I really only had one response! 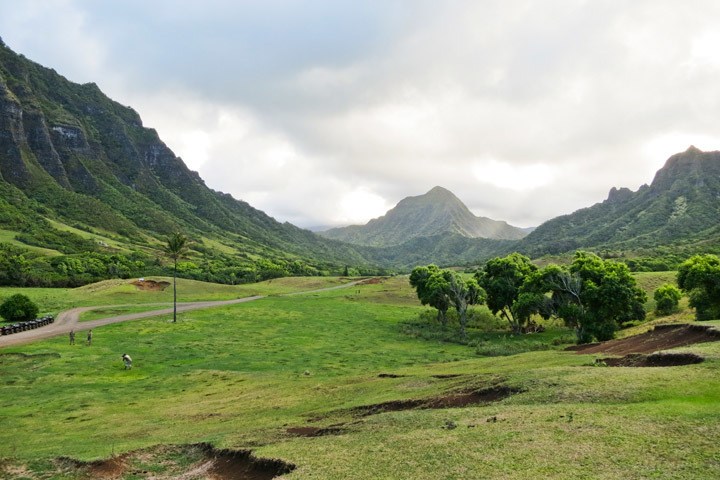 Of course, it didn’t hurt that the tour was located at the beautiful Kualoa Ranch, a total tourism powerhouse in Oahu. The four thousand acre working cattle ranch also doubles as a frequent movie and tv-show set, then runs tours of the property by open-air bus, ATV and horseback. The ranch’s Ka’a’awa Valley, nestled between the Ko’olau mountain range and the Kaneohe coast, is in my opinion the most beautiful place in all of Oahu. 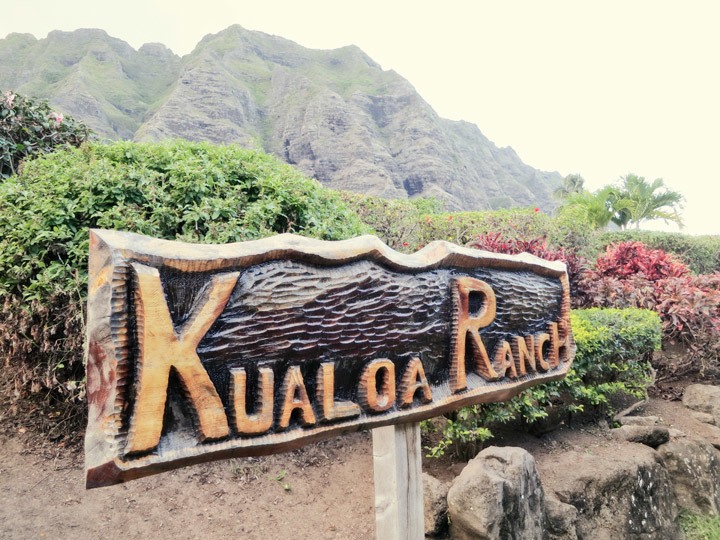 Once upon a time the land was revered as a sacred refuge and was owned by the Hawaiian King. In 1850 he sold the property to a private family for the bargain price of  $1,569.50. Even adjusted for inflation, that would only equal $41,797.26 today. Seems someone skipped a real estate seminar somewhere in there! 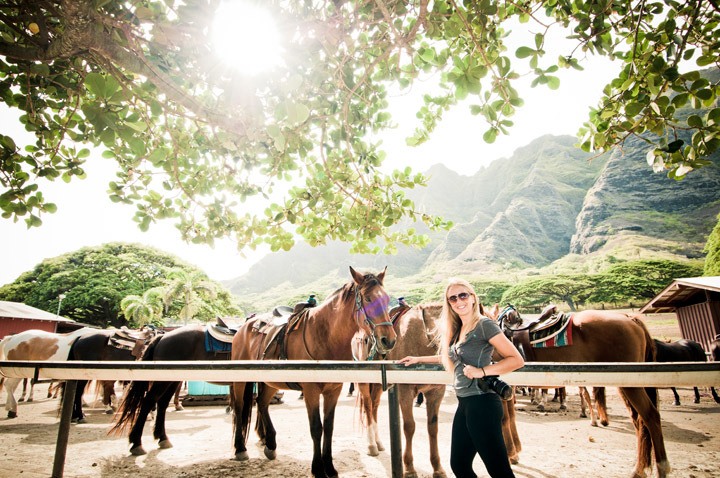 After checking in and poking around the ranch a bit, we headed over to the ATV barn. We had hoped to do the 1 Hour ATV tour which was already pricey at $69 per person, but they were booked up and so we upgraded to the 2 Hour tour, bumping the price up to $99 per person. Well, I figure if you’re going to do something you might as well do it all the way! I was kind of choking at the price but we got this great picture of us all looking like rock stars in our protective helmets, so that eased the pain. 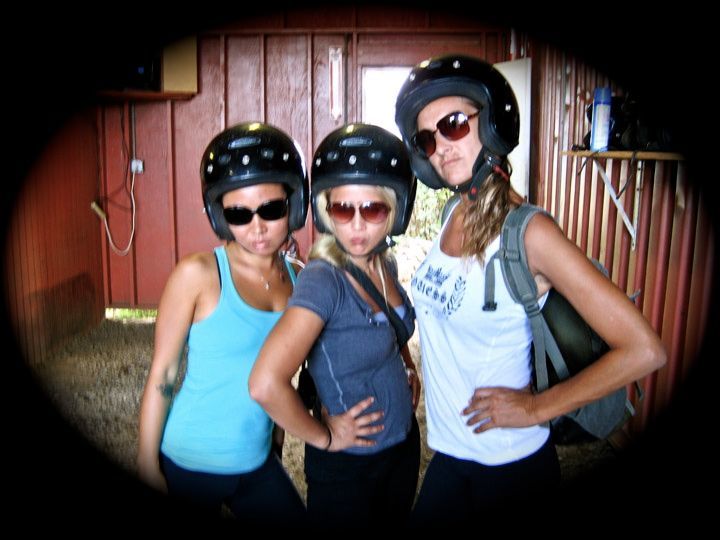 A massive group of us were herded into the barn to watch a painfully liability-aware safety video where we learned the sad news that we would not be going above 12 miles per hour or going off the well-marked paths, making the title of this post a bit of a misnomer. So much for taking advantage of that All Terrain bit! We were then split into groups of six and each assigned an ATV that we drove in a bumper-to-bumper lines around dirt tracks to get comfortable with navigating.

I had a brief moment of motorcycle-crash-and-snowmobile-freakout flashbacks, but after a few turns around the tracks I was feeling pretty comfortable. And we were off! 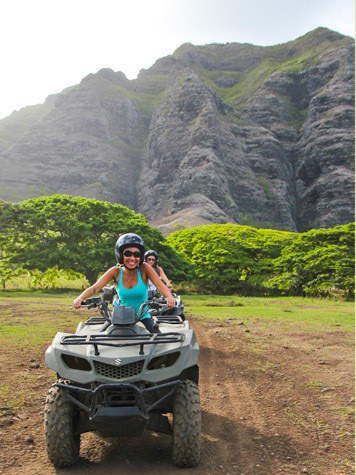 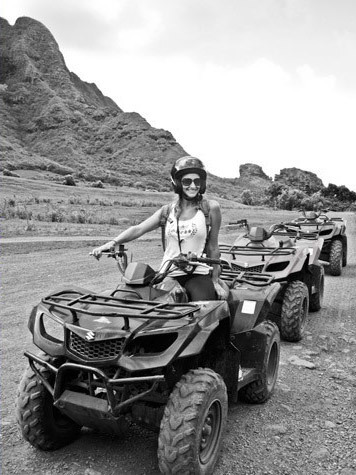 As I mentioned before, Kualoa Ranch is a Hollywood hotspot for filming scenes paradise. Our first stop on the tour was an old military bunker that has been turned into a shrine to the many films and series that have featured the famous ranch. Movies such as Jurassic Park, Pearl Harbor, and 50 First Dates and TV shows like Lost and Hawaii Five-O all feature Kualoa cameos. 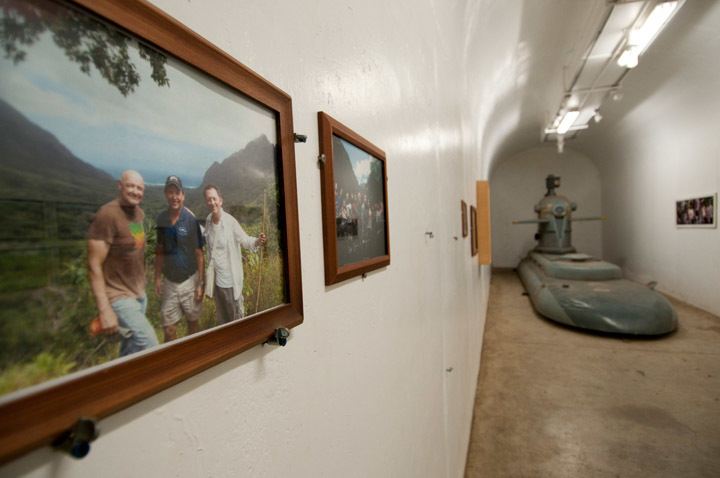 Unfortunately, it only took us to this first stop to realize our tour guide was a dud. He responded to our basic questions with squinting stares into the distance and, if the question was particularly challenging, a sigh and a belly scratch. We were mostly there to soak up the beautiful scenery and have fun together on Wim’s day off of work so we just laughed about it, but really I would expect a tour guide to know some information about the place he is providing tours to!

Then, we turned a corner and entered the stunning Ka’a’awa Valley, and I almost fell off my ATV. I had to fight hard the urge to take out my camera and start driving under the influence of photography. 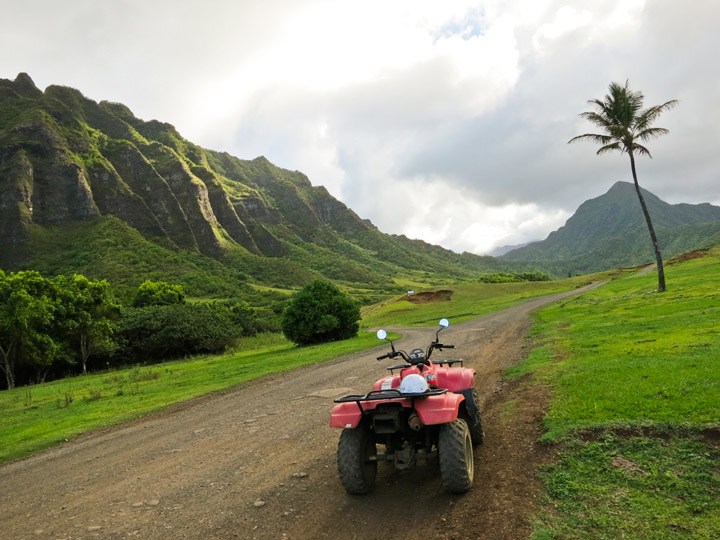 The cloudy afternoon added to the brooding beauty of the valley. Luckily for these camera-toting gals, the tour  featured lots of photo stops. While our tour guide stood off to the side discussing 4:20 and medical marijuana with the Dutch guys in our group, we pranced and posed. 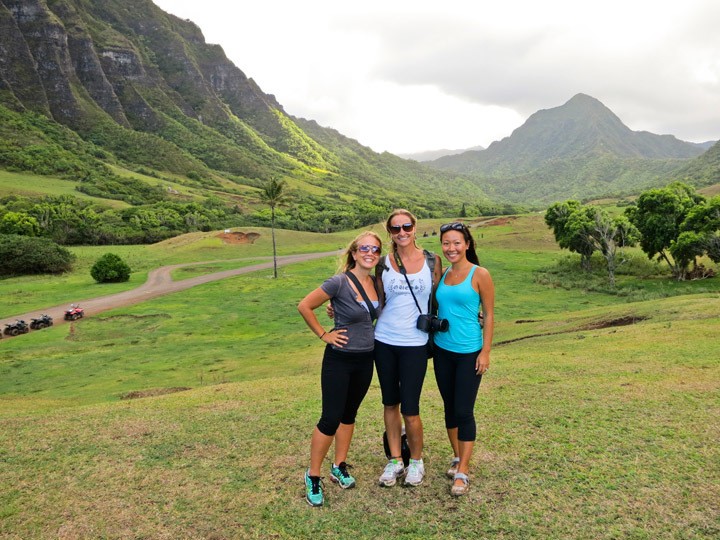 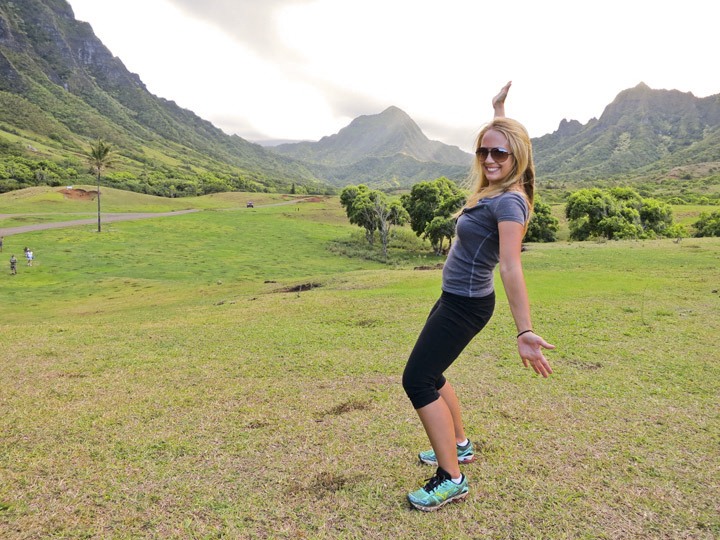 We hopped back on our ATV’s and drove to various movie memorabilia spots, like this arch from a recent Dwayne “The Rock” Johnson flick that I hadn’t heard of, and dinosaur footsteps from Jurassic Park. Do they look a little shallow? Kualoa’s status as an active cattle ranch came to heads with its role as a movie set when cows kept falling into the dino footprints, causing them to fill in all but the faintest outline with dirt. 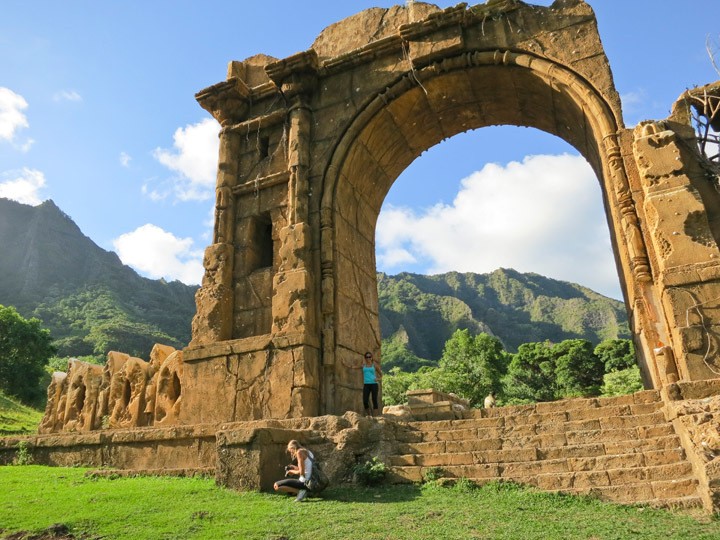 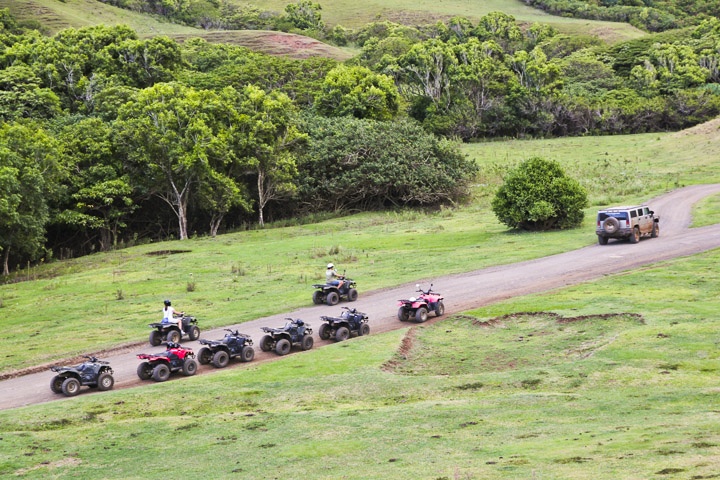 The stops were fun, but I also enjoyed the stretches of driving along, just focusing on steering and soaking up the beautiful atmosphere. When we got deeper into the ranch we were able to speed up a little and I even reached a whopping 15mph! While I don’t like people telling me what speed I can go, that actually felt pretty fast to me for my first time driving an ATV. 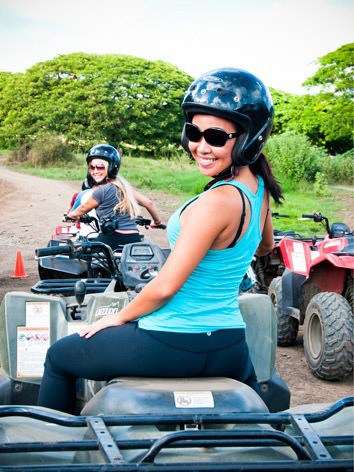 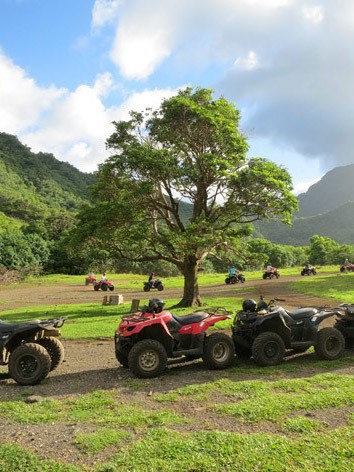 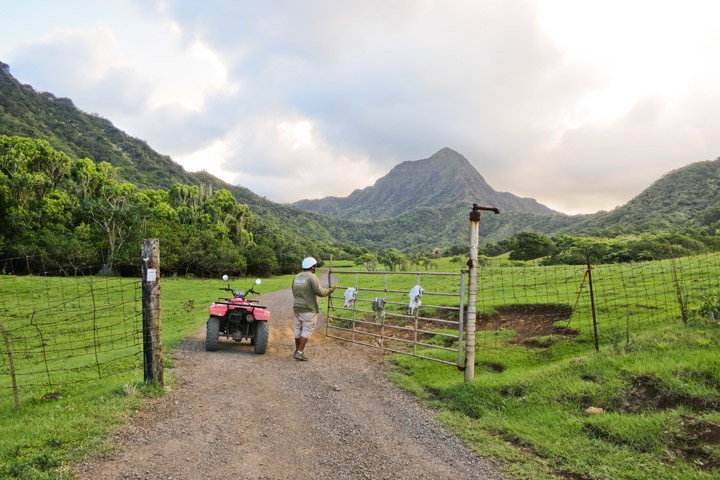 Again, with one photographer, one blogger, and one professional camera ham in our group of three, we basically managed to turn the tour into a full-blown photo shoot. 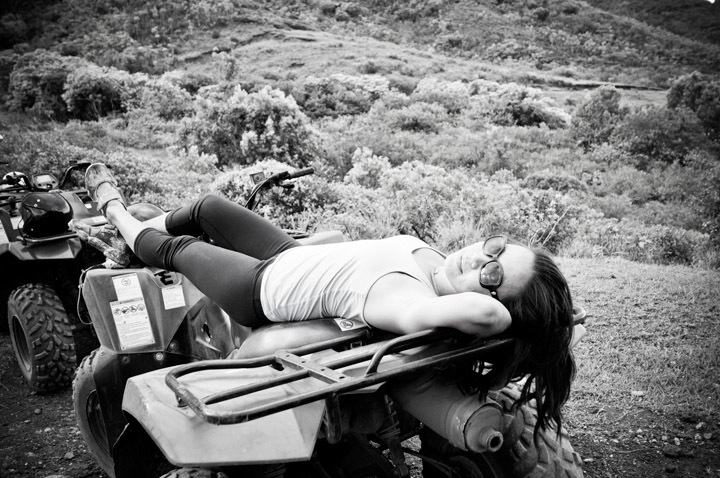 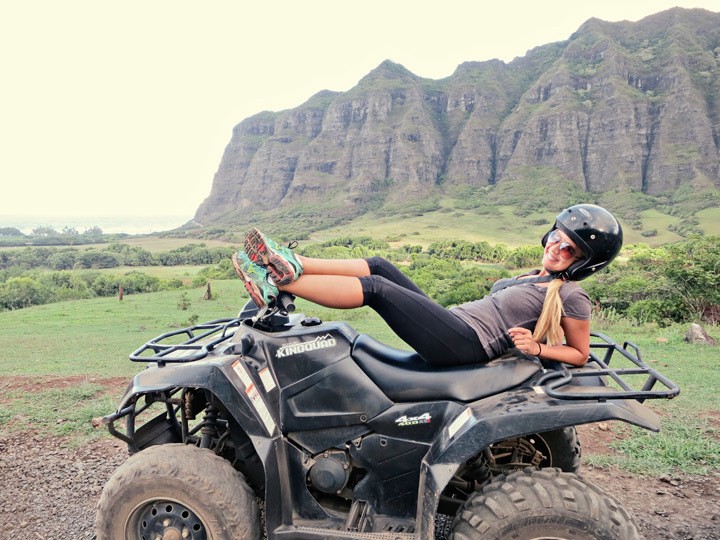 Wim, who as I’ve mentioned before was a fantastic tour guide and host to Heather and me in Oahu, won the award for making me laugh the hardest on this day. After bossing us around for a week (and I say that in a good way) she apparently wasn’t quite ready to turn the reigns over to our disinterested official tour guide. As we lazed about at one photo-op stop, Wim clapped her hands and said “Okay guys, let’s get going! Chop chop!” and which she followed with a muttered “Whoops, sorry, forgot I wasn’t in charge here…” when she saw the shocked look on the group’s faces. 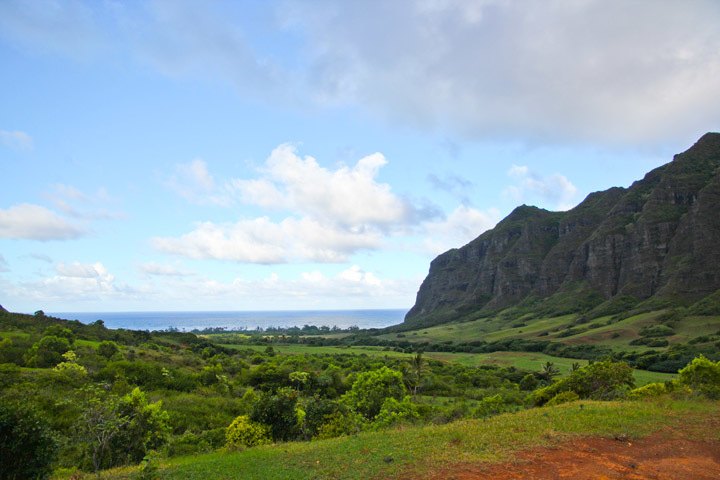 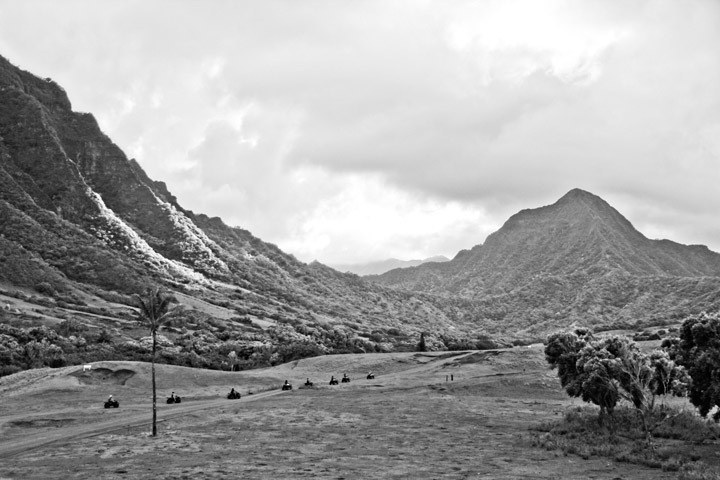 As we curved back around out of the valley and back into the ranch, we passed cows, horses, and mongooses. Reflecting on the awe-inspiring beauty of the land, and I can see why Hollywood directors and Hawaii tourists alike are attracted to this place over and over again. 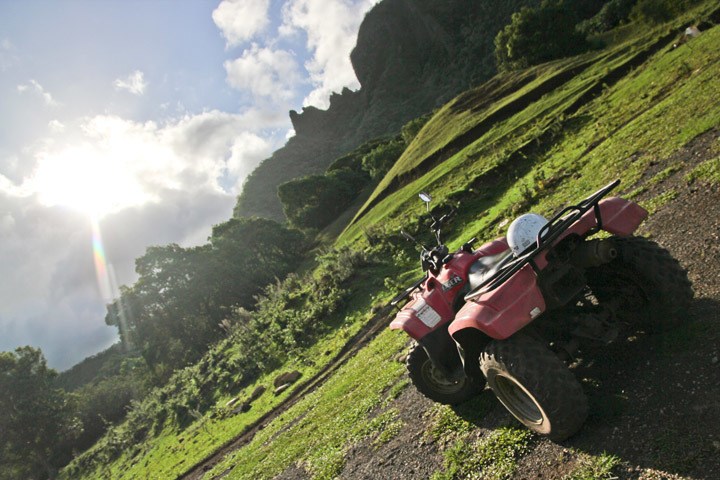 I’m glad my visit to Oahu included a stop at Kualoa Ranch — the views were unreal and I loved spending time with my girls. However, due to the high cost of the tour and the quality of the guide, I would recommend anyone who wants to see the ranch to perhaps take a more budget-friendly expedition tours that take you into Ka’a’awa Valley for a fraction of the price at $24 per person. Still, no regrets for me. I’m happy to add ATVing to the lost list of things I tried for the first time in Hawaii — especially in a place that has a photo backdrop as stunning as this! 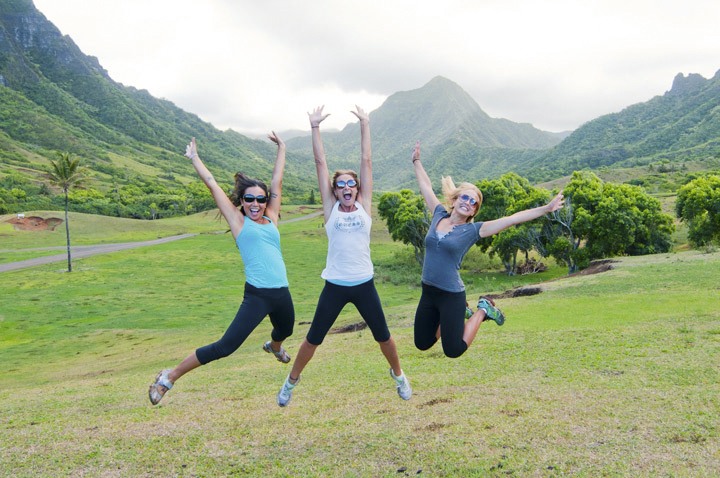 Have you ever been on an ATV Tour? What did you think?

Walking into Canada at Niagara Falls

Fear at Fourteen Thousand Feet: Skydiving in Hawaii Photo of the Week 74
20 Comments...