Adventures Off The Strip: Ziplining in Bootleg Canyon

My most recent trip to Nevada was all about exploring an alternative side to the Silver State. Sure, we slept in Las Vegas and stuck to the neon lights at night, but our days were all about stimulation off the Strip. The pursuit of one such adventure brought us to nearby Boulder City to explore Bootleg Canyon — from the air. 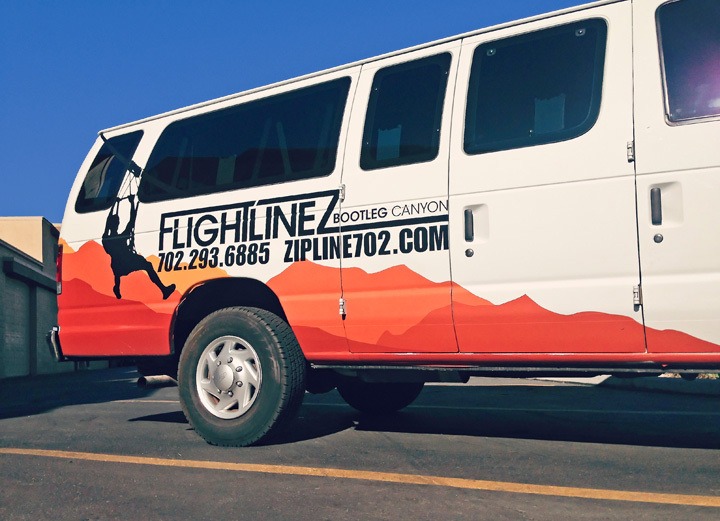 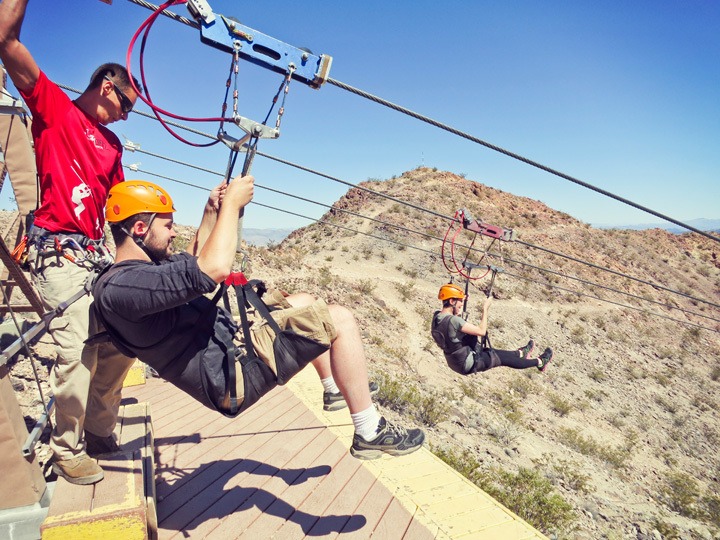 I’ve been ziplining several times before — from one island to another in Thailand, over a raging river in Honduras, and through a lush jungle in Ecuador. Basically, you’ve got to wow me to get me excited over hopping into another harness. All kitted up and ready to fly, I gazed out the window during our van ride to the top of Red Mountain and realized this would indeed be a different experience than the ones I’d had before. For one thing, the landscape was from another world — vast red desert sculpted into canyon as far as the eye could see. I had my eyes peeled for big horn sheep, though I was warned they were most often spotted in the morning.

For another thing, the guides were a piece of work. I get the feeling that working at Flightlinez is the fantasy of overgrown frat boys/Seth Mcfarlane fans everywhere. While our sense of humors weren’t exactly aligned they got quite a few laughs out of me just for their sheer enthusiasm — and the depth of their emotional wounds when their jokes fell flat.

Exiting the van we had about a fifteen minute walk up the mountain. When we reached the top, I gave the boys a nod that said touché. Standing at 3,800 feet above sea level, the view was fabulous. 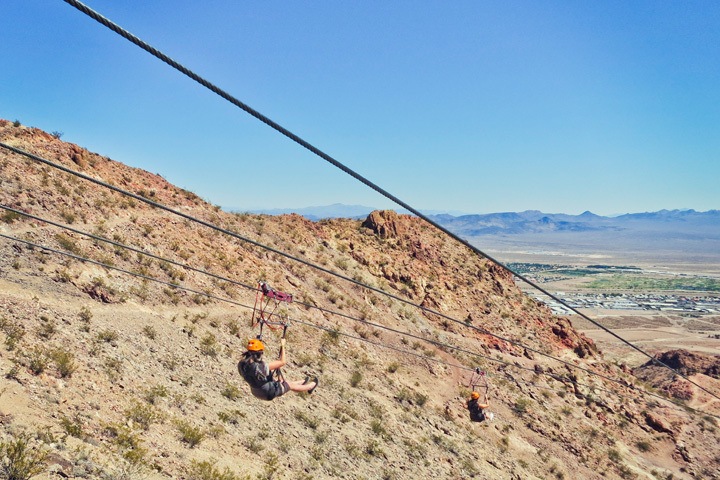 There was only one way to go — down. The course is made up of four ziplines gradually bringing flyers back down to the base of the mountain. Statistically, the course is impressive, with a 400 foot drop on the first run, a mile long (well, eight feet short) runway on the third run, and maximum speeds of 60mph — which granted, would seem a lot more intimidating had we not just raced cars on a professional racetrack.

And, of course, there are badass outfits to go along with it. 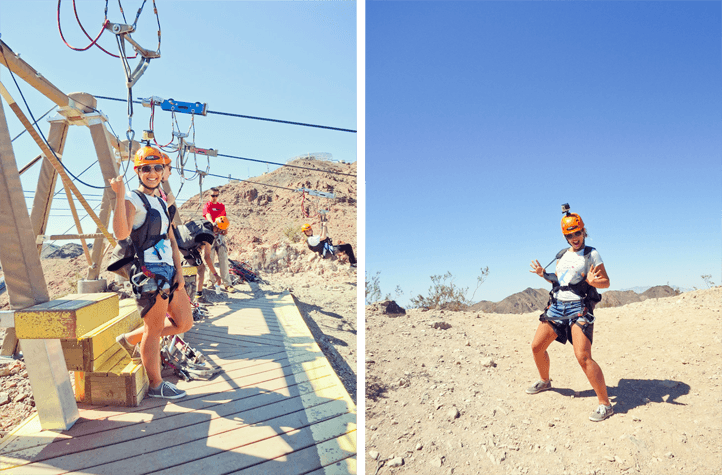 Actually, the getups were pretty impressive. There were plenty of GoPro

-ready helmets to go around and the harnesses had pockets in the back for safely toting cameras, water, and the one thing I would have paid approximately one billion dollars for at the time — chapstick. For the love of all things holy, do not forget chapstick when flying down an aerial runway in the desert. Just thinking about its heavenly moisturizing properties almost made me faint.

What also almost made me faint, but in a good way? The drool-worthy views over Lake Mead, which looked like a mirage in the distance. 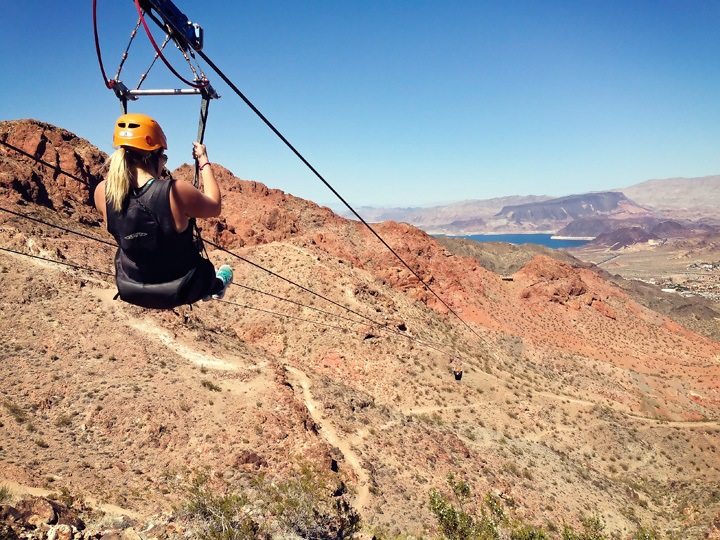 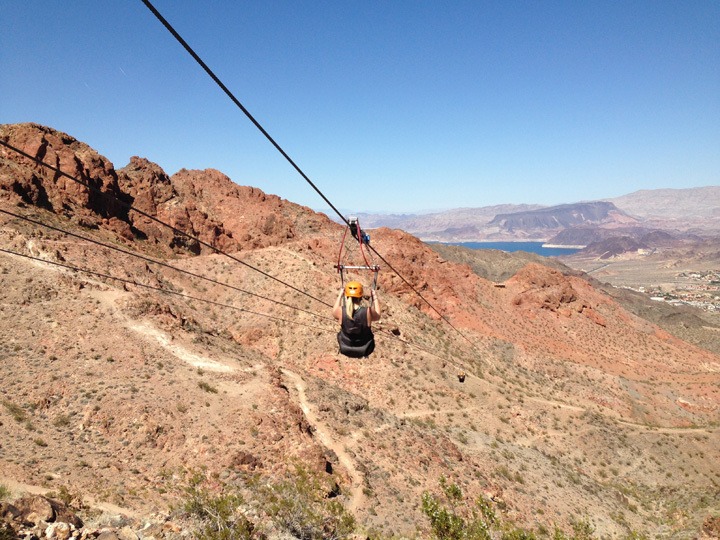 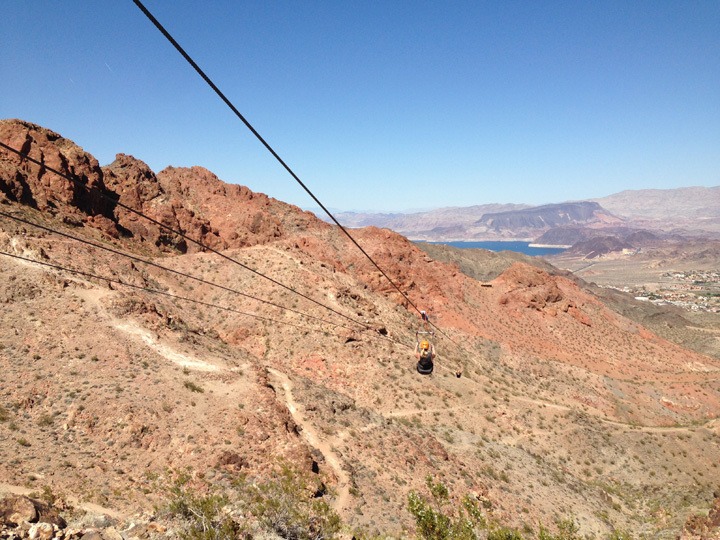 Despite the fact that there are only four runs, the entire experience takes about two and a half hours — you really get to know the mountain well. But thanks to the magic of technology, you can come along with me in two minutes or less!

After the final run, Flightlinez won my heart forever with a simple but beyond genius marketing move — a bucket of branded chapstick. My only constructive criticism would be to hand those babies out up on the course, but I was obviously too busy slathering my lips in waxy goodness to make any kind of suggestions.

But seriously, if you’re looking to break away from the Vegas strip and see a little bit of the aesthetics and adrenaline Nevada has to offer, Bootleg Canyon should be on your short list. 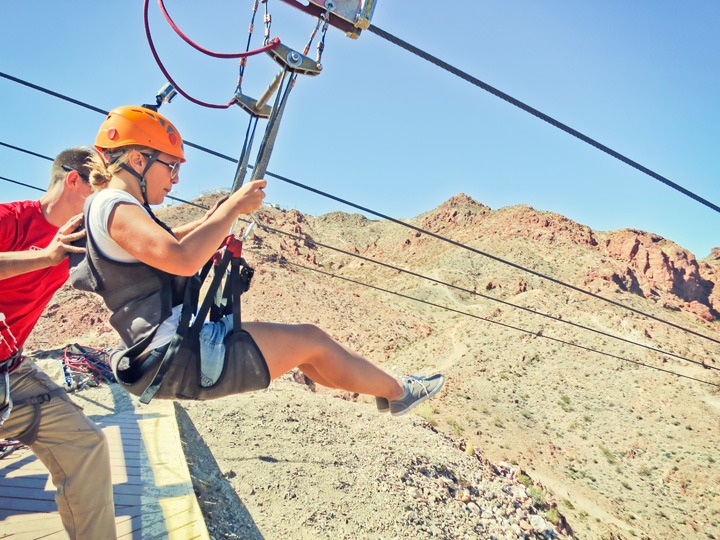 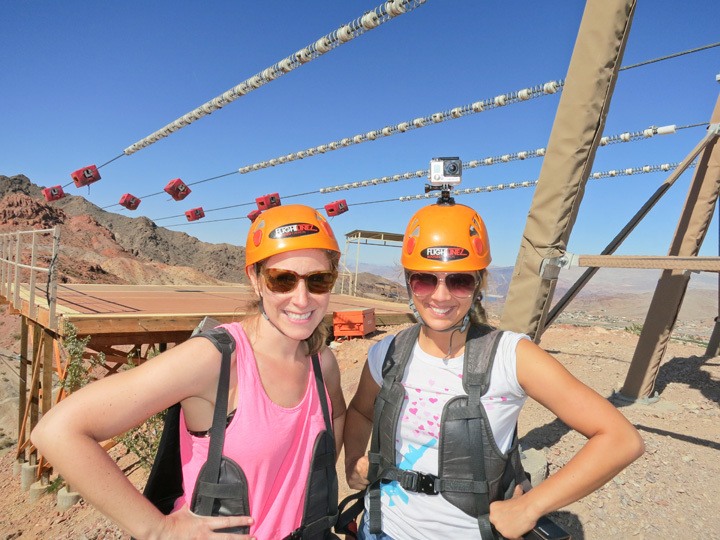 Many thanks to Travel Nevada for hosting me and showing me a new side of Nevada. As always, you receive my honest opinions regardless of who is footing the bill.

Father’s Day from Above: A Helicopter Ride over Los Angeles

Photo of the Week 159 Adventures Off The Strip: Winery Touring in Pahrump
38 Comments...