When I looked over the itinerary for my recent Las Vegas trip with Travel Nevada, there were a few things that made me squirm in my seat. Was I really going to do that? And that? While everything planned was legal and relatively safe, some of the activities were definitely out of my comfort zone. Yet I reminded myself that travel is all about pushing personal boundaries, and Las Vegas in particular is the perfect place to leave preconceived notions behind.

And so off I trotted to the desert to race cars, shoot guns, and interview hookers. Yup, this would get interesting. 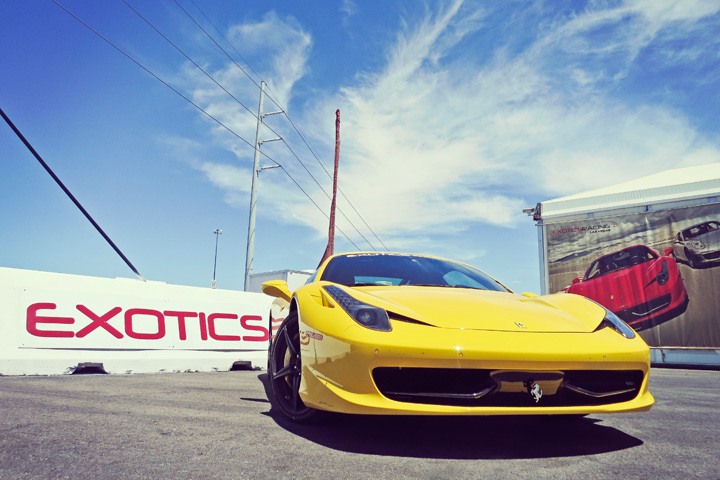 Ever since a particular traumatizing tumble off a moped in Thailand, I tend to shy away from motorized vehicles as a carefree form of entertainment. Sure, I’ve tried ATV riding in Peru and snowmobiling in Iceland, but I went so slow I actually tipped the guides extra afterwards for boring them. Yet there’s always a bit of a thrill to doing something that scares you. When we pulled up at Exotics Racing, my internal dialogue went a little something like this:

Anxious Alex: You know, I’ve seen Fast and the Furious and these cars flip over all the time! What are they even thinking letting someone who took four times to pass their driver’s license behind the whee–?!

Deep Thoughts Alex: Not to mention the repercussions of fetishizing luxury cars in an already consumer-obsessed society! Don’t you thi–

Apparently my inner adrenaline junkie has been watching a tad too much Nashville. 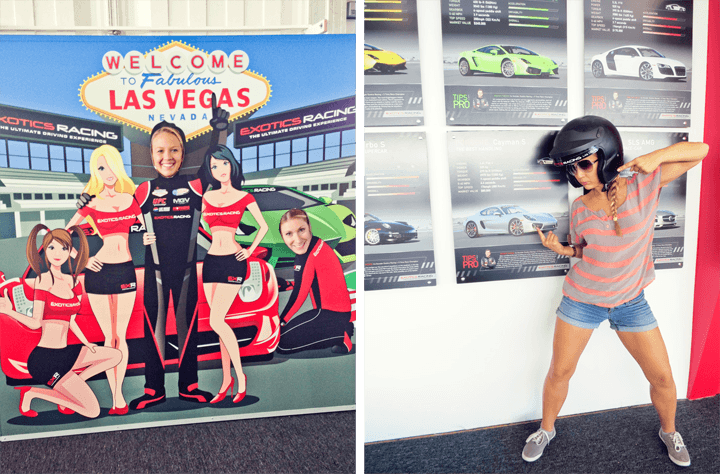 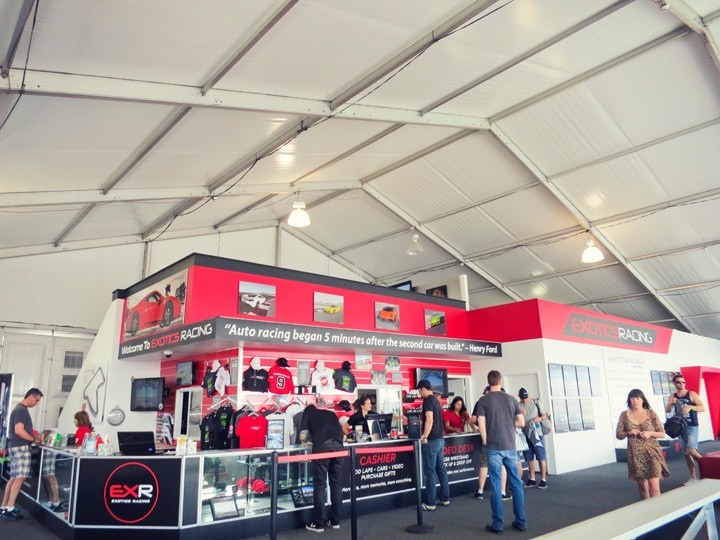 Our VIP package included five laps around the racetrack in our choice of cars. My ride was a Porsche Cayman — perfectly suited to a girl who spent a summer working in the Cayman Islands! — or so I stated to the amusement of exactly no one at the track. After a safety briefing we piled into SUVs for a tour around the track with an Exotics Racing employee at the wheel, which was a crucial step towards making me a bit more comfortable when it was my turn behind the wheel. Finally, it was time for a helmet fitting (for maximum coolness) and meeting our instructors. And, you know, a quick browse on my iPhone to check insurance policy prices with Southern Cross.

And then, I was off. 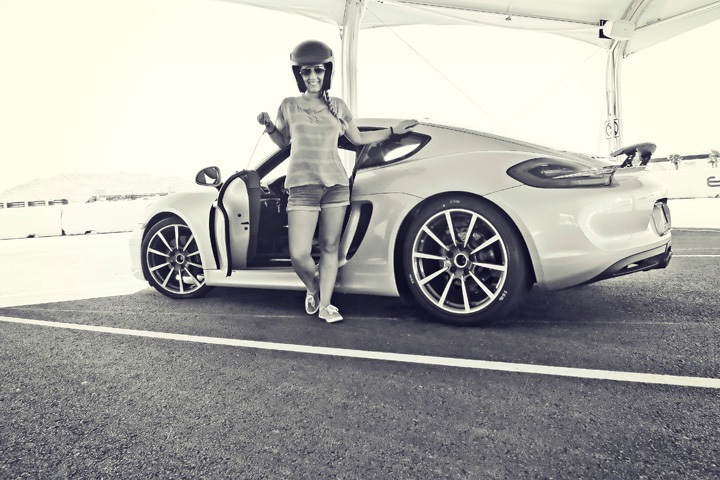 Unfortunately I was unable to edit down the above footage due to a weird file formatting, but if you skip to the last three minutes or so you’ll get a good idea of the sound effects I emitted for the duration of my five laps — though you will miss me quizzing my instructor on which one was the brake. Despite all odds, I did push 100mph! (Noise barrier breaking high pitch squeals included.) 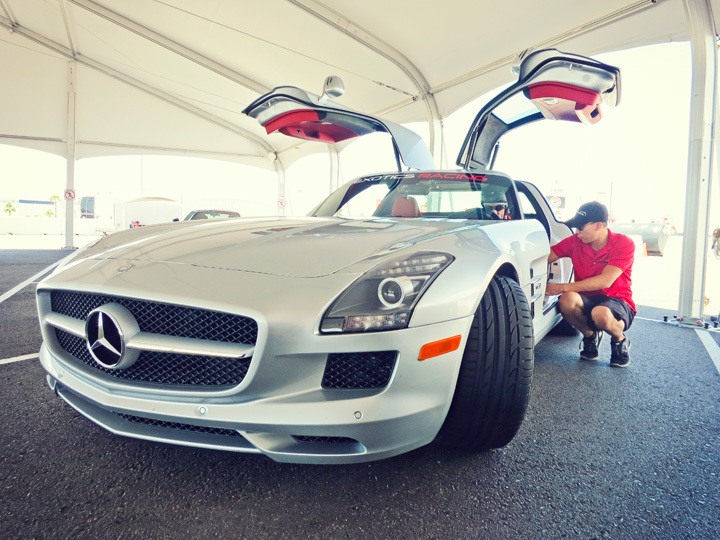 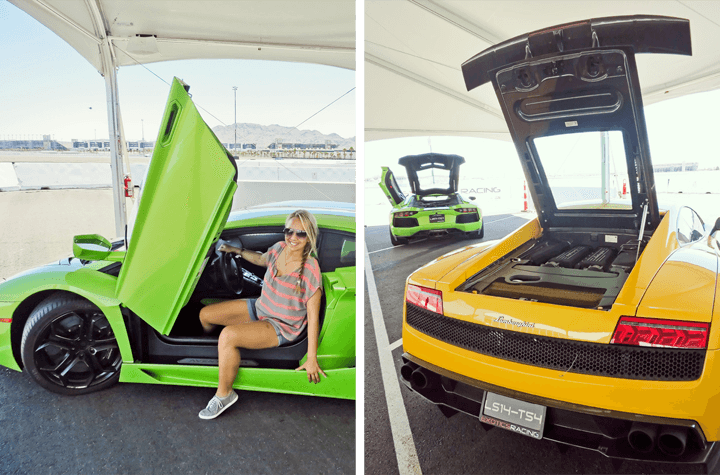 Final thoughts? I dug it. I was on a serious adrenaline high upon exiting the vehicle, and despite my nerves I absolutely felt like I was in good hands the entire time. With prices starting at $199 for five laps plus $30 for extra laps, I actually feel this is a pretty cool way for a racing enthusiast to experience driving a car they might otherwise never get behind the wheel of. While I won’t be signing up for a NASCAR audition anytime soon, I surprised myself with how much fun I had. 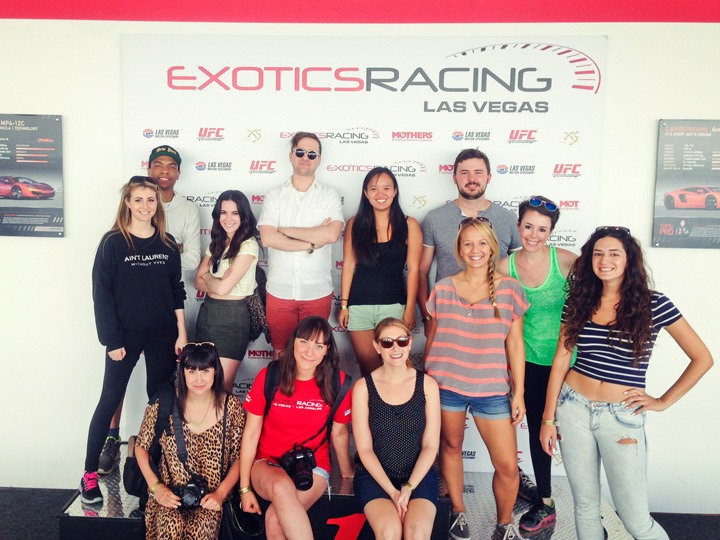 Of all the comfort zone-pushing activities on the trip, visiting The Gun Store was the one I felt the most conflicted by. I have strongly-held beliefs about gun control and I wondered if I’d be able to enjoy a lighthearted tour of one of America’s most famous ammunition outlets. I actually considered skipping out entirely, though curiosity and the pursuit of keeping an open mind pushed me forward. 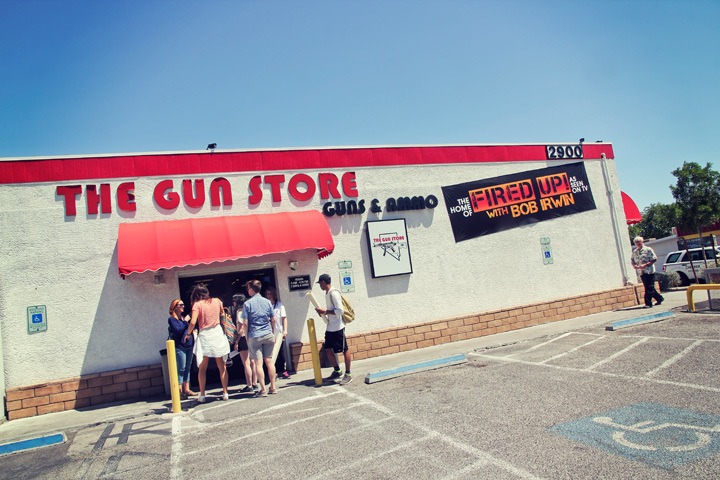 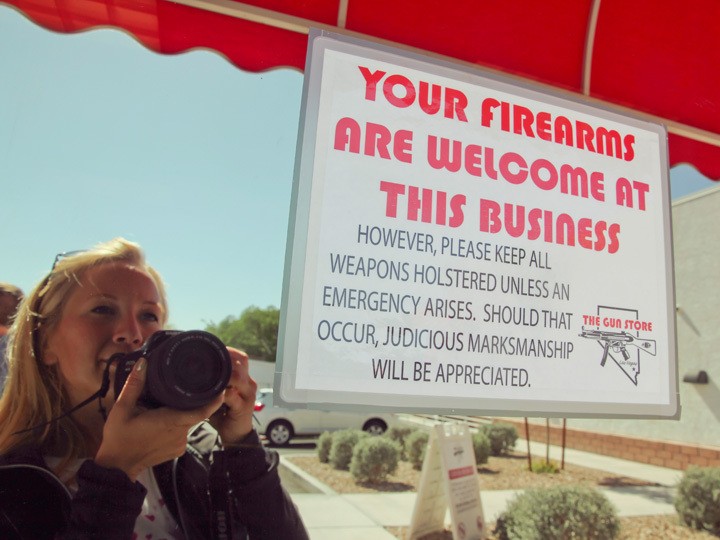 “Do you think they’ll revoke our Democratic party membership just for being here?” whispered a fellow writer, who must have sensed a sympathetic ear. And with a smirk and a what-are-we-getting-ourselves-into head shake, we joined our tour with The Gun Store’s very charming Emily Miller. She showed us around the retail store and explained the various shooting packages and gun handling classes the store offers, all while emphasizing safety and the staff’s high level of training and experience. Alarmist flyers advertising shooting courses outlined grizzly home invasion crimes with victim photos splashed across them.

I was mostly curious about who The Gun Store’s clientele is, and was surprised by the response — more than 85% of shooting range customers come from other countries. They are looking for an experience that, for better or for worse, they can’t have anywhere else. 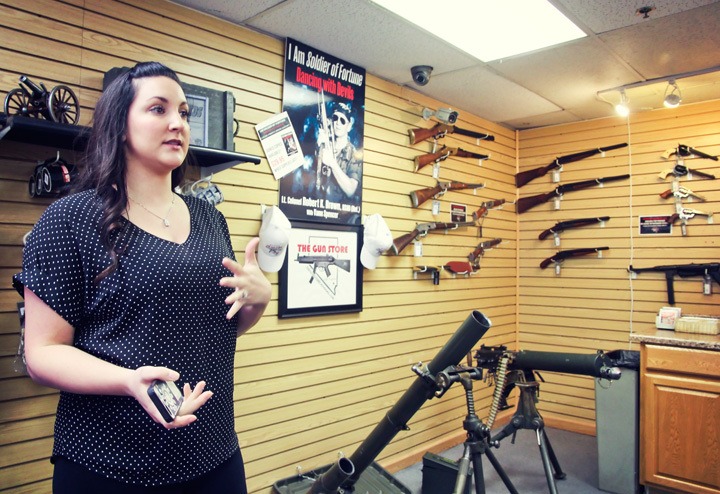 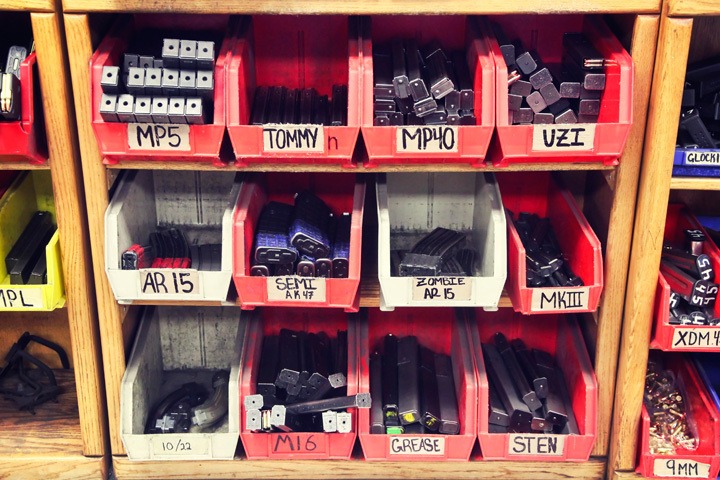 So far I remained extremely skeptical, but Emily was about to win me over in the most unlikely way. I cracked a smile when we walked into the chapel and headquarters of Shotgun Weddings, where Miss Miller personally officiates over all ceremonies. “When I came up with the idea, I said to my boss, I’m only going to marry people if I can marry everyone. So we do it all — commitment ceremonies, gay weddings, you got it.” My liberal heart flush with fuzzies, I suddenly found humor in packages like the Mr. and Mrs. Smith and Wesson.

Again, I was amazed at the demographics. Out of about 75 weddings performed in the chapel, a vast number of them were Canadians. 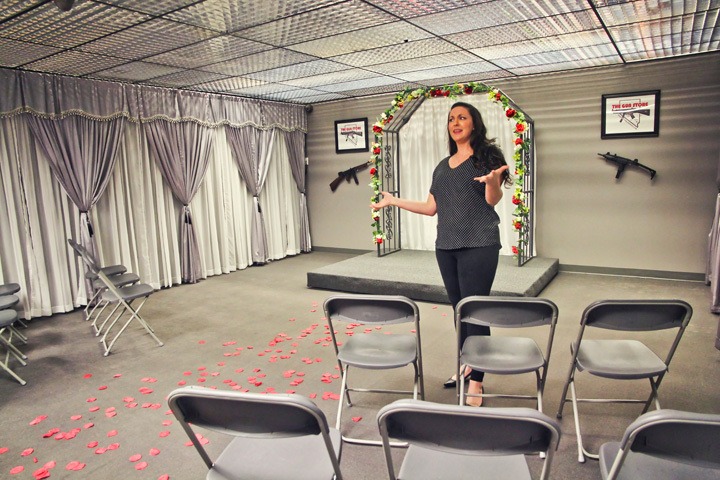 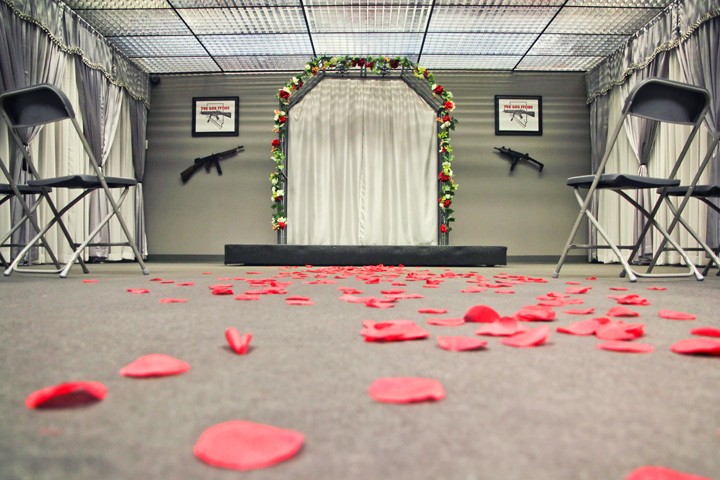 Then it was time for our turn in the range. I winced when I saw one of the target options was a vaguely Middle Eastern looking soldier, and went for the innocuous bullseye instead. When choosing what weapon we wanted to shoot, I requested whatever was emblazoned on the t-shirt I had found in the back of my closet while packing for the trip. They informed me it was an AK-something or another, but that actually their models shot bullets rather than pink love hearts. 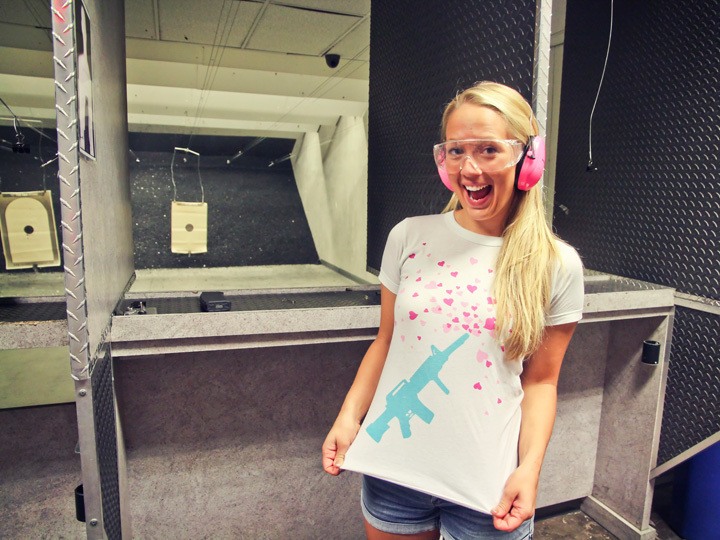 Well, I tried it. I give the staff at The Gun Store major props for their safety procedures and professionalism, but you won’t find me around another shooting range anytime soon. I personally found the experience of being in the room very unpleasant — the loud noises and the smells made me anxious, as did the concept. While customers having a unique and controlled experience like what takes place at The Gun Store doesn’t technically bother me, I couldn’t fully separate my core beliefs about my country’s gun crisis from what was going on there enough to enjoy it.

Am I glad I went? I’m still not sure. I do believe there is a virtue in keeping an open mind, but in the end visiting a shooting range did not square away with who I am or what I believe. 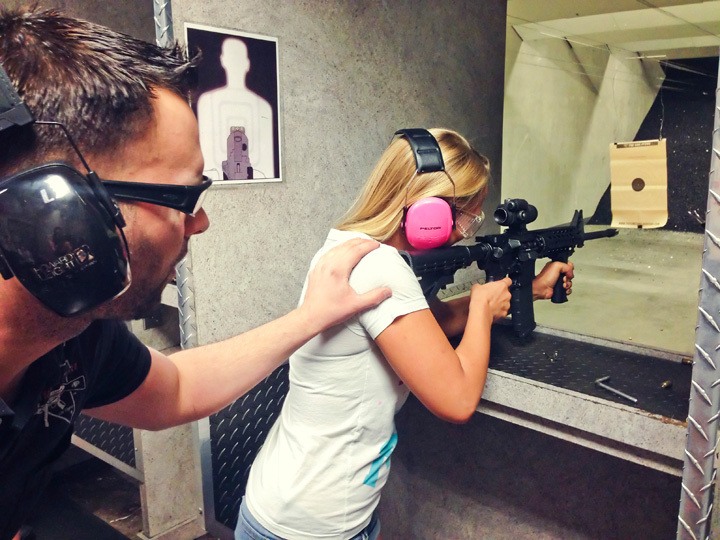 Touring a Brothel in Pahrump

Of all the drool-worthy draws to this trip — from tickets to a Cirque de Soleil show to a helicopter ride over a certain infamous canyon — I think the one I was most fascinated by was visiting Sheri’s Ranch brothel. My extensive travels in Southeast Asia have led me to see prostitution through a lens of exploitation, and I had a suspicion that visiting a legal brothel would challenge that. At the very least, it would be unique. Prostitution is illegal in the US everywhere except Nevada — or more specifically — except certain rural counties of fewer than 400,000 people in Nevada.

Located in Pahrump, a dusty hour outside Las Vegas, Sheri’s Ranch looked like a nondescript dive bar either very early or very late in putting up/taking down their Christmas decorations. Tours of the ranch are free, though tipping is highly encouraged. My first question to the two women leading our tour was what they’d like to be called. Prostitutes? Sex workers, perhaps? Or something even more politically correct that I wasn’t aware of? “I don’t care what they call me, as long as they pay me,” one of the women said flatly. I must not have hid my surprise well because she laughed and assured me kindly, “Hooker is fine.” 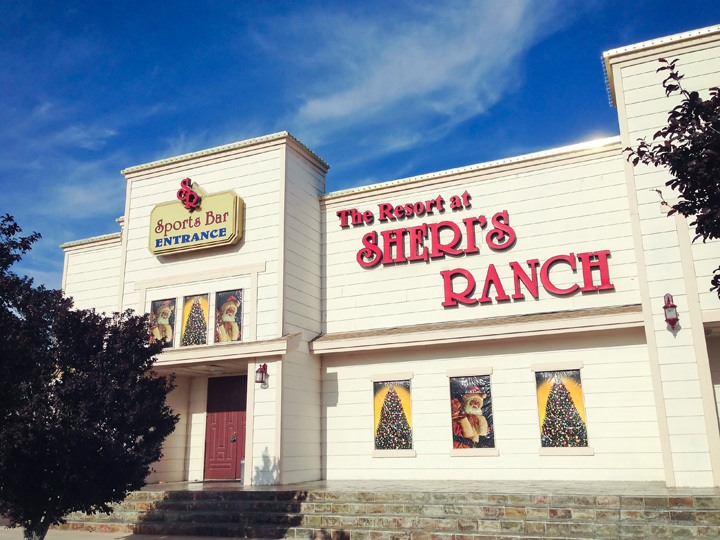 The women were extremely candid except when it came to two topics — details on the ranch’s security and exact figures on what they charge. Because each woman working at Sheri’s is licensed as an independent contractor, she sets her own prices and menu of services. Both women strongly emphasized that they were in complete control of their experience at the ranch and were never pressured to do anything they weren’t comfortable with.

The logistics of working at Sheri’s were intriguing. None of the girls employed by Sheri’s are local (“too much drama” explained the madam cryptically) and so they travel from far and wide to do their stints at Sheri’s. Our two tour guides hailed from Minnesota. Shifts last for a duration of 1-3 weeks, with a minimum of one week off before returning to the ranch. When at the ranch, women are on for twelve hours at a time, either 5am to 5pm or 5pm to 5am. In addition to giving the house 50% of all profits, the women must pay for taxes, a registration card with the local sheriff, their transportation to the ranch and back, their STD tests upon arrival, and necessities like new outfits and condoms (which are legally mandatory). On top of that, they pay a daily rent of $46 a day which includes room and board. 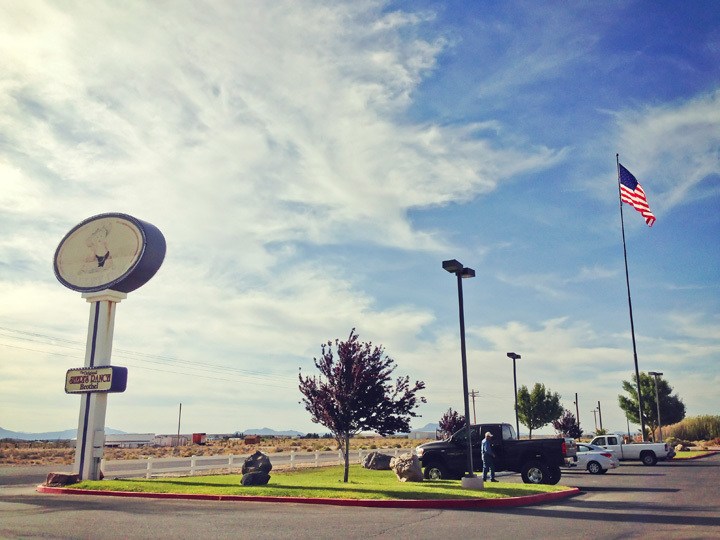 Most surprising to me was the fact that the women are forbidden from leaving the fence-enclosed property (the fence too is government mandated) once they have checked in — unless they want to pay for another expensive STD test on their way back. “There’s nothing out there except for Wal Mart anyway,” one of the girls assured us, while pointing out that they had everything they needed, including a gym and tanning bed, a beauty salon, a computer room, and movie theater onsite. Those facilities are in a private, employee-only section of the ranch. Not roped off to clients? The girls’ bedrooms, where they both sleep and service clients — another detail I was surprised by. There are certain themed “party rooms” clients can rent as well, including one featuring a hot tub and sponsored by Budweiser — seriously. Sheri’s Ranch is the only brothel in the US with a corporate sponsor.

I’m still no closer to fully understanding the complex issue of legalized prostitution or processing how I feel about it, but I know this: I left Sheri’s Ranch with my eyes wide open, and was reflecting on the conversations I had there long after we walked back out of the door marked Girls Girls Girls. 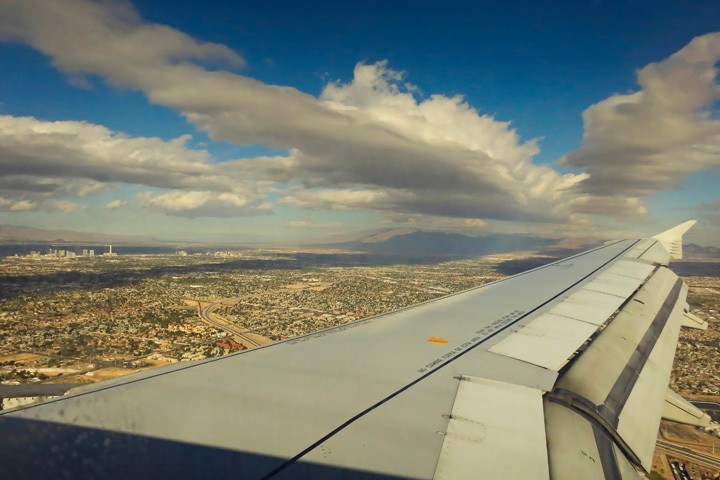 Travel can be transformative when it takes you out of your comfort zone and pushes your personal boundaries. I love that on this trip I did three things that I never would have chosen for myself. One made me confront a fear and surprise myself with how much I enjoyed it, and one reminded me that sometimes it’s okay to not enjoy something, and one made me deeply reflective about a complicated topic society often avoids.

One thing all three had in common? Only in Nevada. Seriously.

Many thanks to Travel Nevada for hosting me, and showing me a new side of Nevada. As always, you receive my honest opinions regardless of who is footing the bill. This post was brought to you in collaboration with Southern Cross Travel Insurance.