When we last left off, my mom, sister and I had just arrived in the town of Arnastapi in Western Iceland. All day we had been catching glimpses of the Snæfellsjökull ice cap, a looming preview of our afternoon adventure. 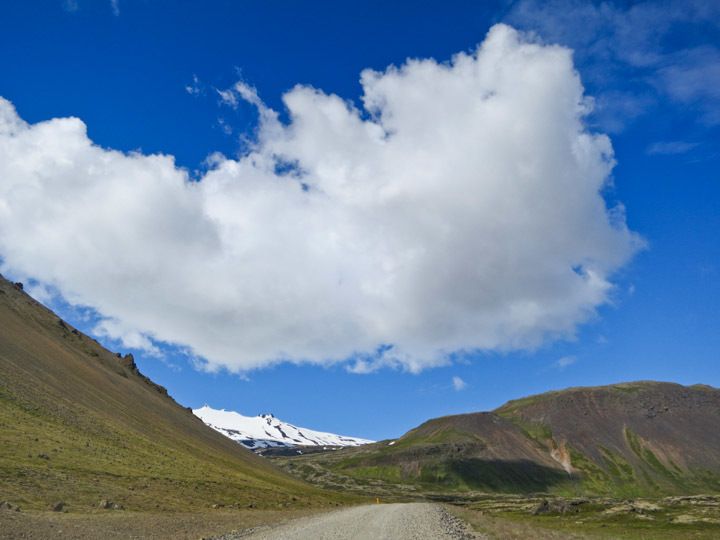 Snæfellsjökull is famous for being the setting for Jules Verne’s Journey to the Center of the Earth. The famous book tells the tale of a geologist and his nephew’s journey into the crater — a journey that would be impossible today now that the crater is filled with ice. And that’s not the glacier’s only claim to fame. Among modern mystic groups, Snæfellsjökull is considered a great “power center” of the world and is said to give off great energy. 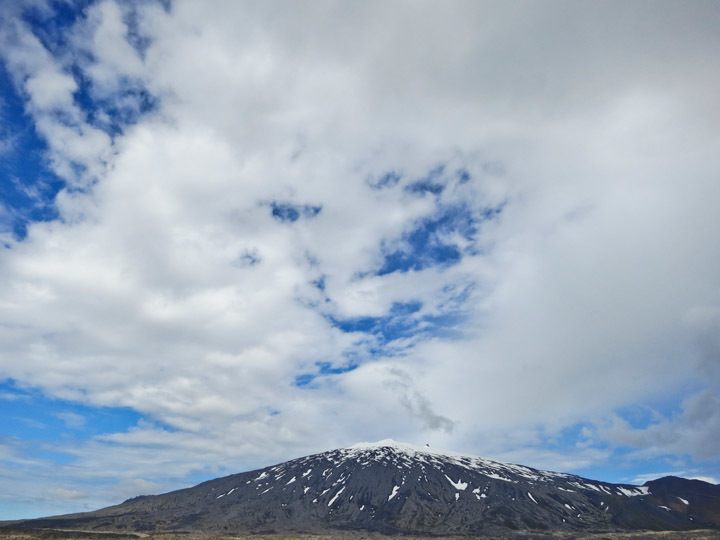 It is possible to get to the summit by hiking — but why hike when you can ride? Being the adrenaline lover that I am, I was thrilled to try snowmobiling for the first time in such a dramatic setting. We first considered taking the popular one-hour snowmobiling trip from Gulfoss, along the Golden Circle route. However, at 25,000 kroner ($138US) per person, it was a pricey endeavor. When we managed to find a trip for 22,000 kroner per person ($121US) from Arnastapi, we were pretty pleased (that’s a fifty dollar savings among the three of us!). 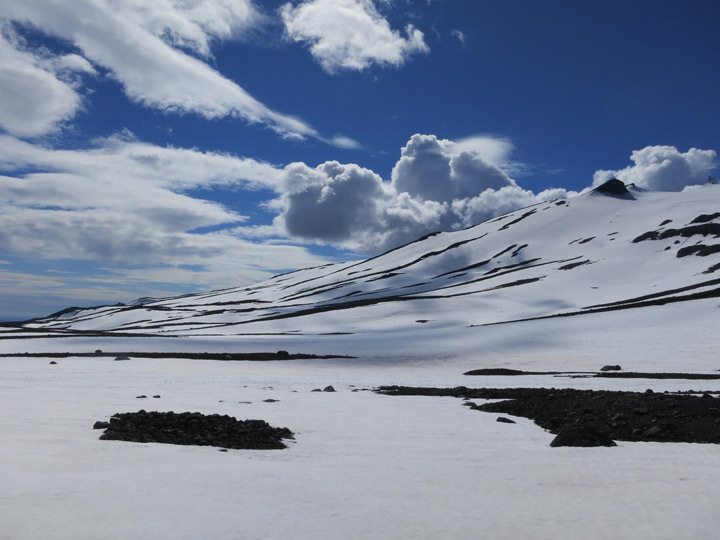 The trip began with a drive up one of Iceland’s nerve wracking F-roads (a title that strikes fear into the heart of rental car drivers around the country). So far on this trip I had cantered across a lava field on a horse, scuba-ed through icy glacial waters, and I was about to drive a snowmobile. Yet none of those made me close my eyes and shake with fear the way driving up that rocky F-road! My stomach nearly dropped out of the seat a few times as I pictured our little silver sedan slipping all the way down the mountain. 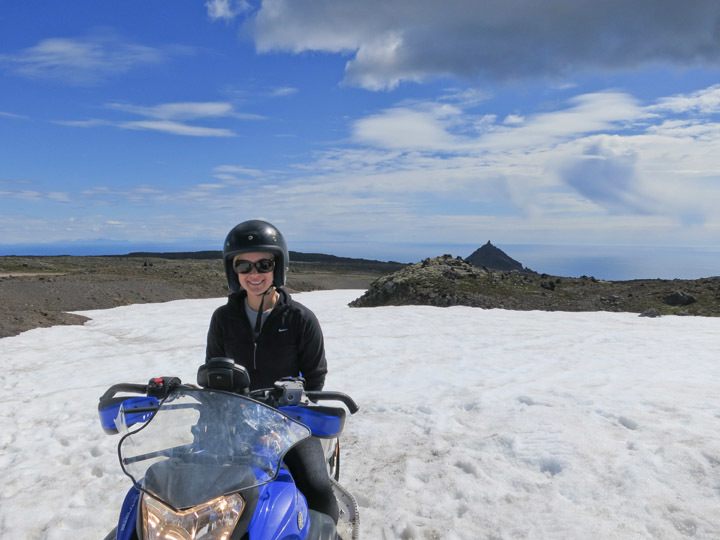 Finally we made it to the start of the snowline, where we found our guide waiting with three snowmobiles. Even in the height of summer, we were getting a private tour! Of course, due to the summer weather the snowline was pretty far up the mountain. Our guide informed us in accented English that in the winter the tours often start all the way back in Arnastapi. 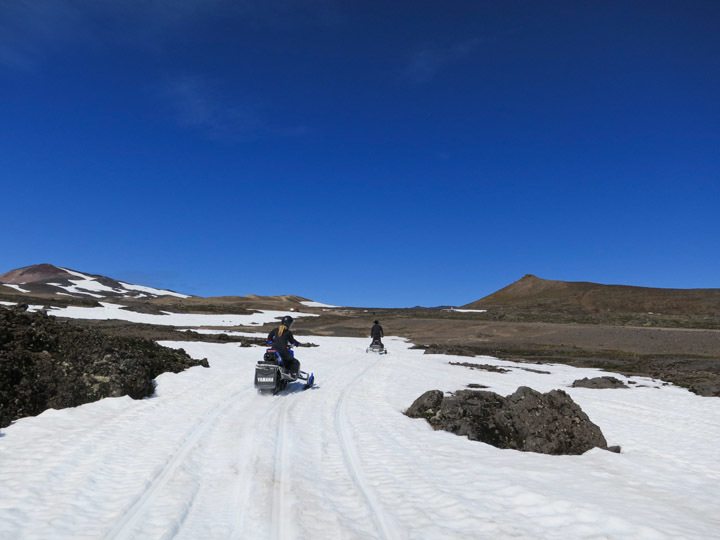 To be more economical, we rented two snowmobiles among the three of us. I took the first turn on the back so that I could do my favorite thing — take photos and video! To see video footage of this trip, check out my One Week in Iceland movie. 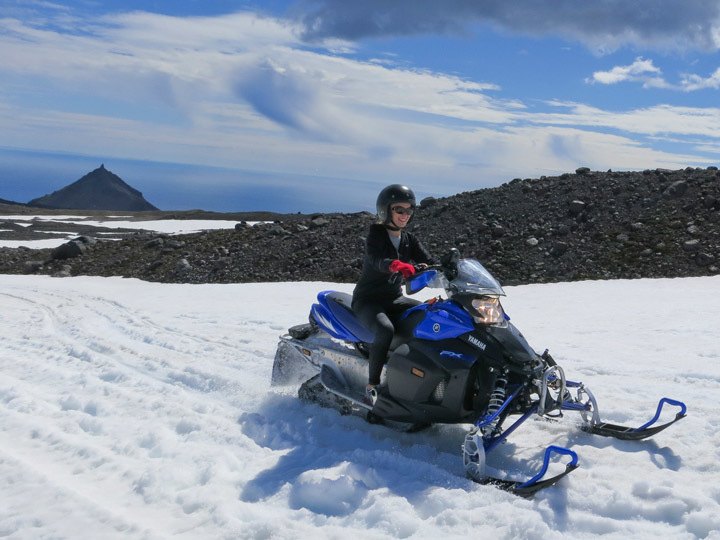 From where we started the landscape was volcanic rock punctuated by long fingers of snow. As we zipped further up the glacier, white took over as the predominant color of the landscape until eventually we could see the ocean on either side of us. 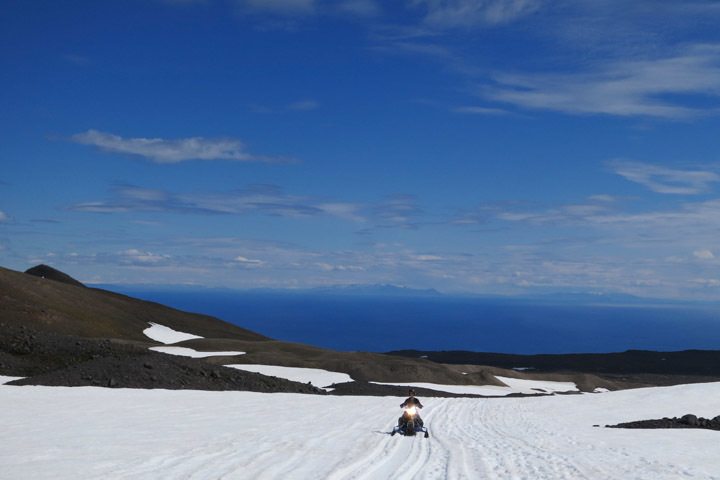 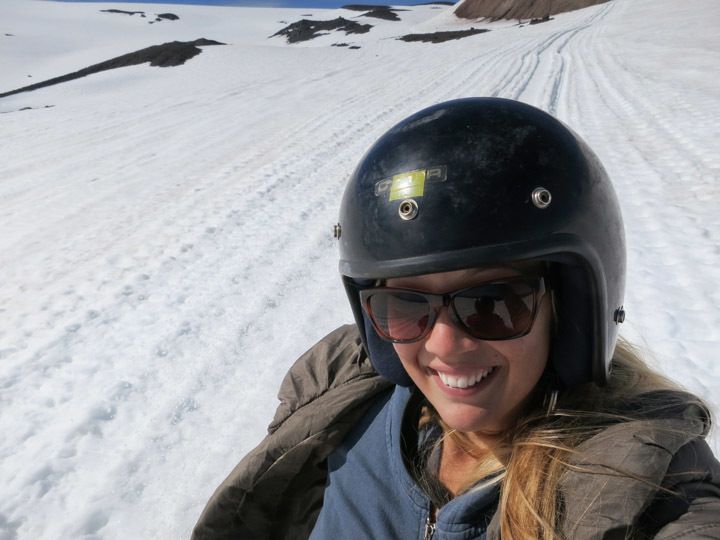 Halfway up we stopped so that I could take a turn driving. Um, yeah. This is what happened: 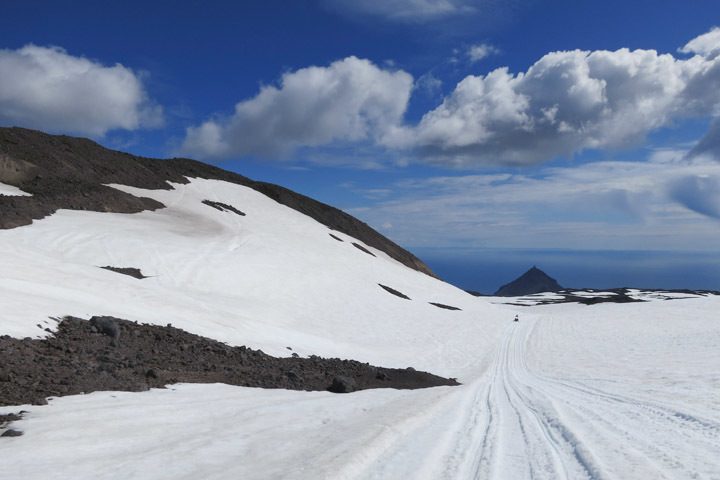 See the little dot back there? That was me. As soon as I got onto that bike I started having PTSD-style flashbacks to my motorcycle crash(es) and I was pretty paralyzed by fear. I think once you feel the weight of a several-hundred-pound piece of machinery come out from under you as you completely lose control over it, it’s a hard sensation to forget. 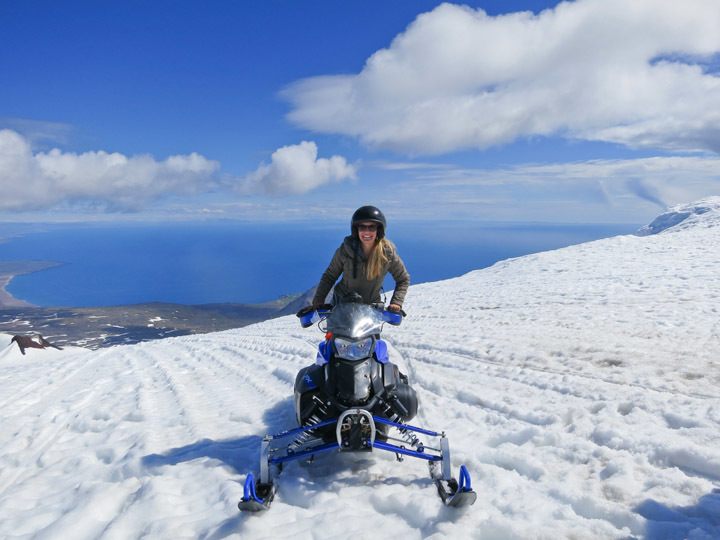 In the past I might have beat myself up for not LOVING SNOWMOBILING, but at this point I’m feeling pretty confident in my adventure activity levels. I’m pretty cool with enjoying this sport from the passenger seat.

Olivia, on the other hand, was a natural. 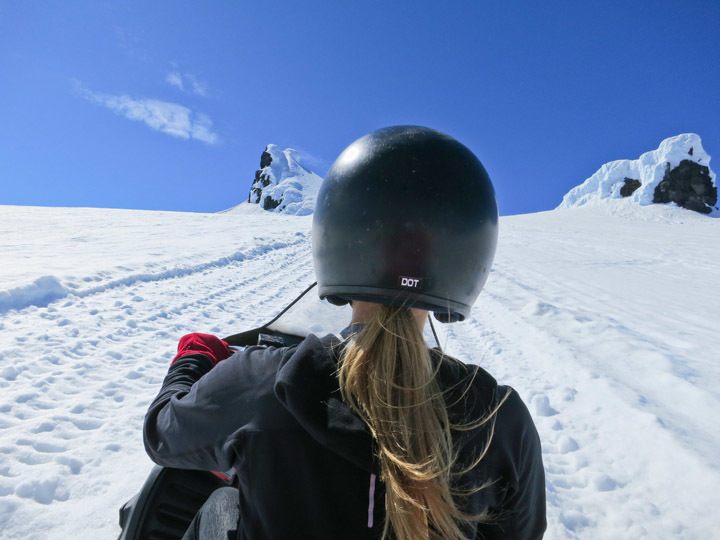 And then suddenly we were 4,744 feet above sea level, staring down at the peninsula we had spent two days driving across. If we squinted we could identify each of the tiny towns we has passed through, like a real life topographical map. My mother might object to me saying this — it being her money and all — but I think the views were worth every penny. 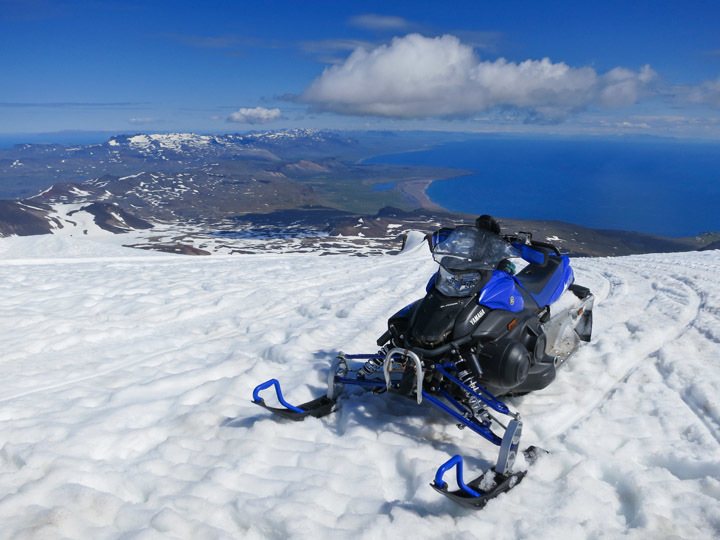 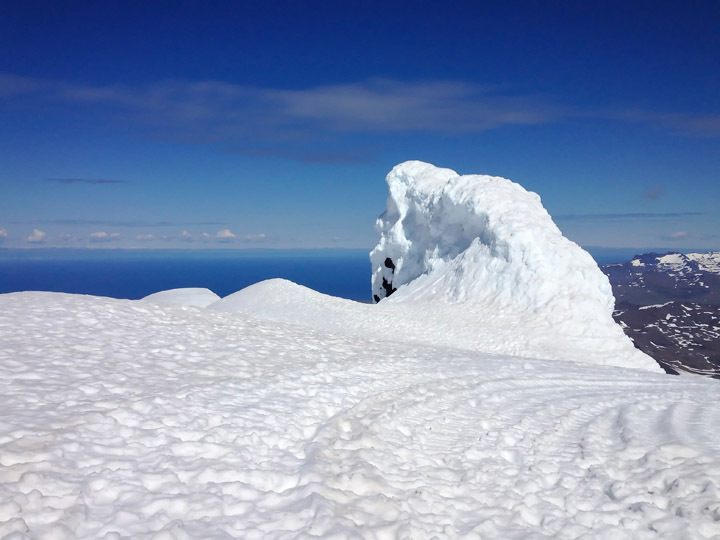 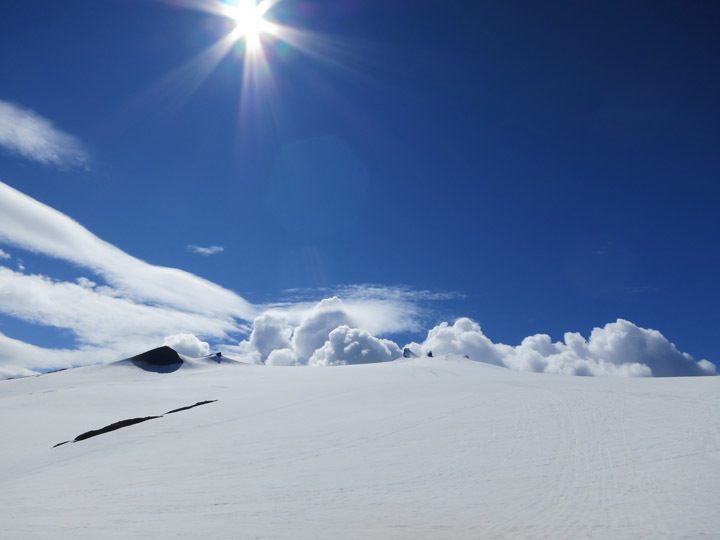 We did it! We summited an Icelandic glacier via snowmobile. As I said, the snowline was pretty high due to the summer weather and global warming (let’s not even get into that one) so we were running ahead of time on the tour. Lucky for us, that’s meant more time for a glacier photo shoot! 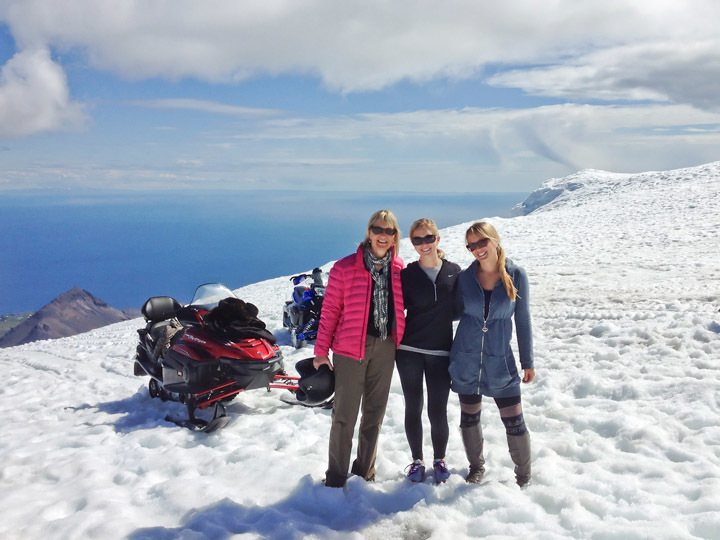 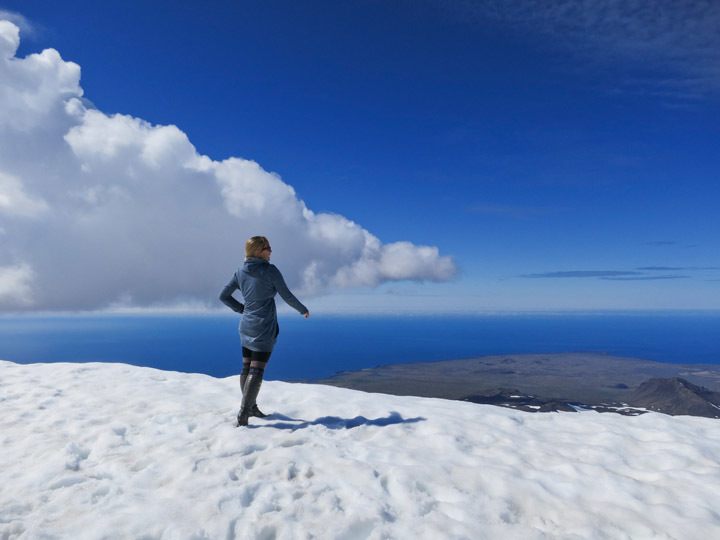 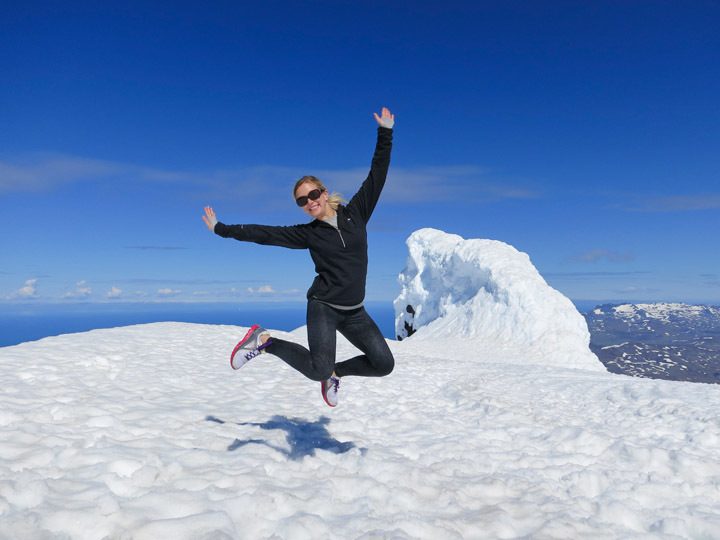 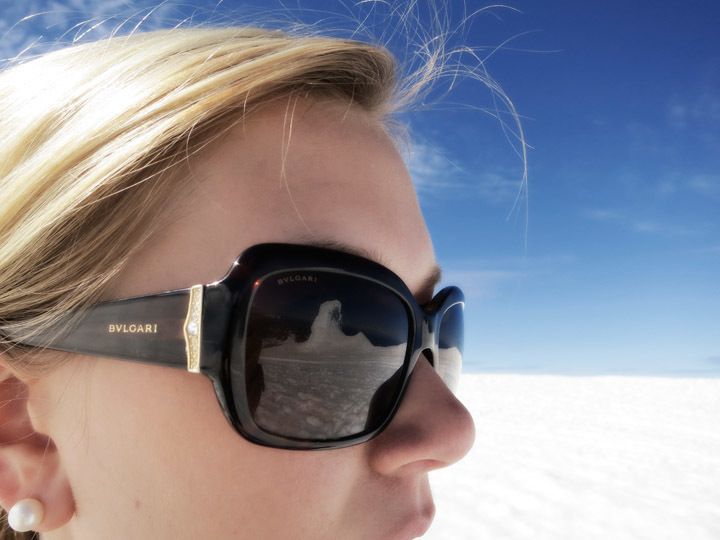 Our guide was very patient with us but eventually we grew slightly self-conscious of asking him to take our photo from various angles around the mountain — we do have some shame, you know. And so we started the process of going down, which intimidated even new-found daredevil Olivia. 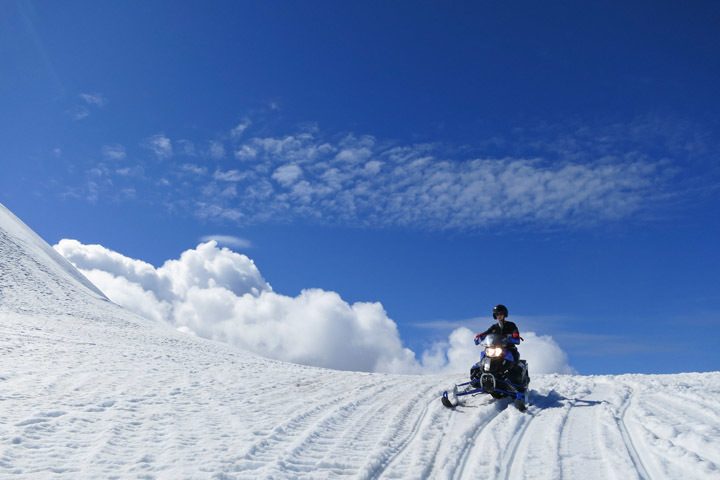 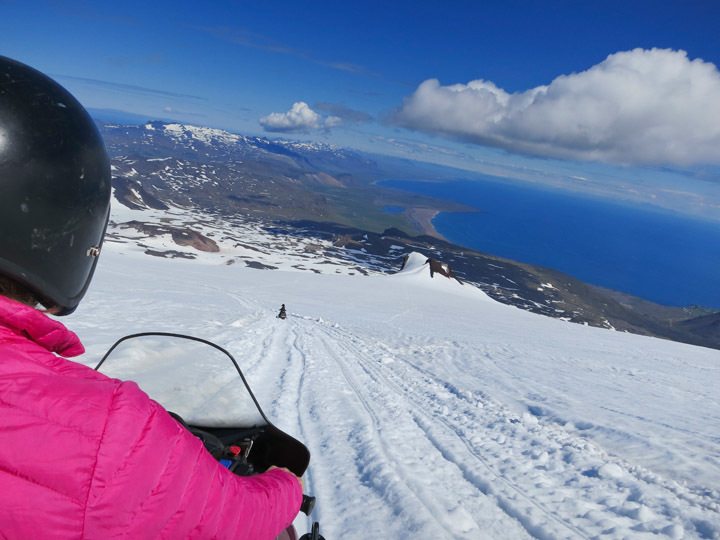 We were so lucky to end our trip to Iceland on such a literal and metaphorical (and I promise not physical) high. While I wasn’t much of a driver, I loved the experience and I’d do it again — as a passenger, of course. 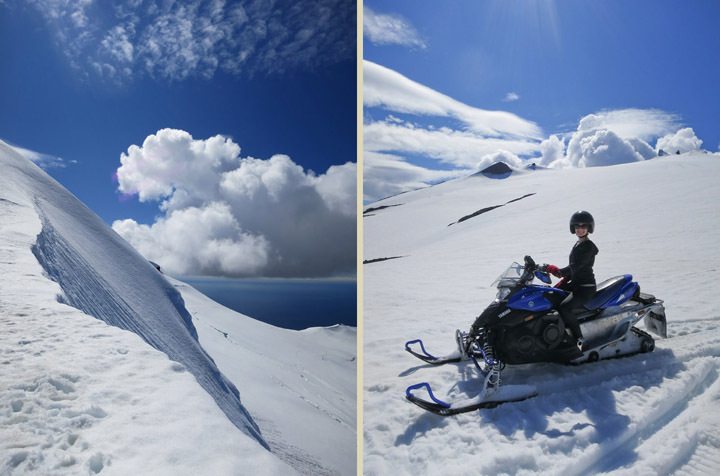 Can you believe this is the conclusion of my Iceland coverage? I can’t believe how many posts resulted from a one week trip! But while my mom and sister headed home the next morning, I was on a plane heading further east, to the United Kingdom. Stay tuned!

Exiting news! This week there is a huge 35% off sale on Travel Blog Success, the online course that helped me make Alex in Wanderland what it is today! This program changed the way I looked at travel blogging and helped me move it from a hobby to a business. The member’s group gives me daily inspiration, feedback, and assistance. I couldn’t ask for a better community! Click here and enter coupon code “tbs35” to get your lifetime membership at this special rate.