Leaving Lima, Zoe and I were in desperate need of some bright blue skies — and let’s face it — some silly backpacker fun. We found our salvation in the tiny desert town of Huacachina. And I’m not kidding about the tiny.

As of the 1999 census, Huacachina had a whopping 115 residents and can be strolled around in ten minutes or less. Luckily, the place is pretty easy to access thanks to the nearby transportation hub of Ica, only a 7 sole ($2.50) cab ride away. Huacachina functions primarily as a resort town getaway for residents of Ica and tourists both domestic and foreign. While most of the unassuming buildings are lodging, travel agencies, or restaurants, on our inaugural stroll around the lagoon we did stumble upon what would surely be in the running for World’s Quaintest Library. 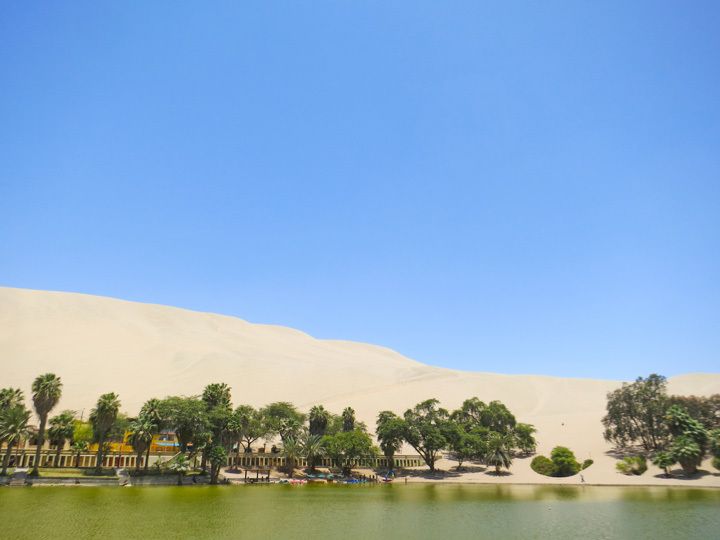 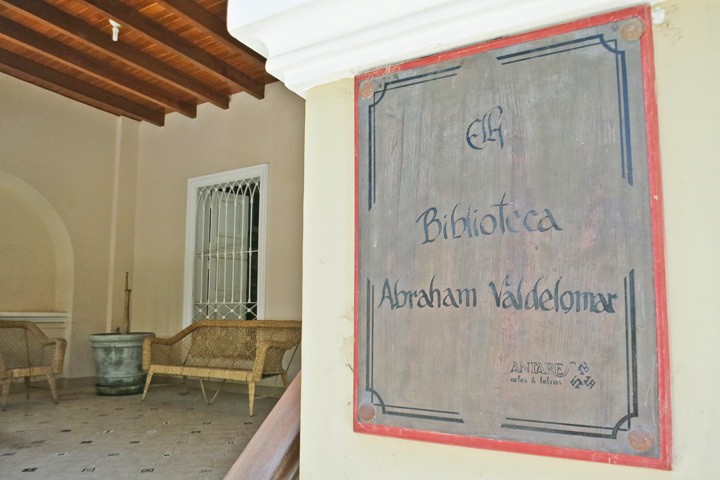 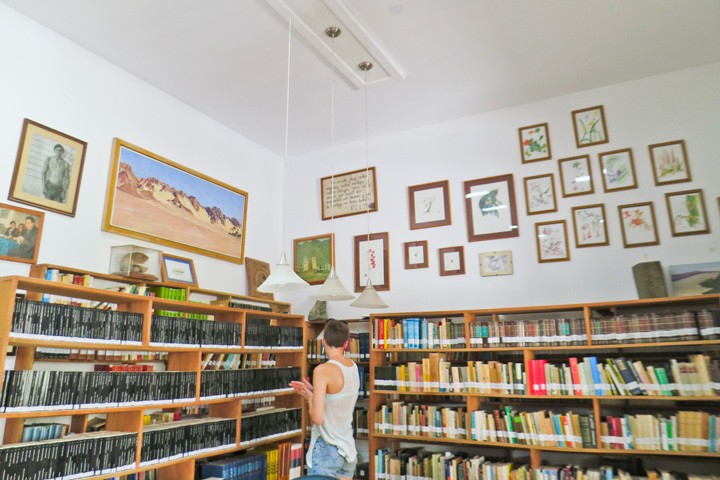 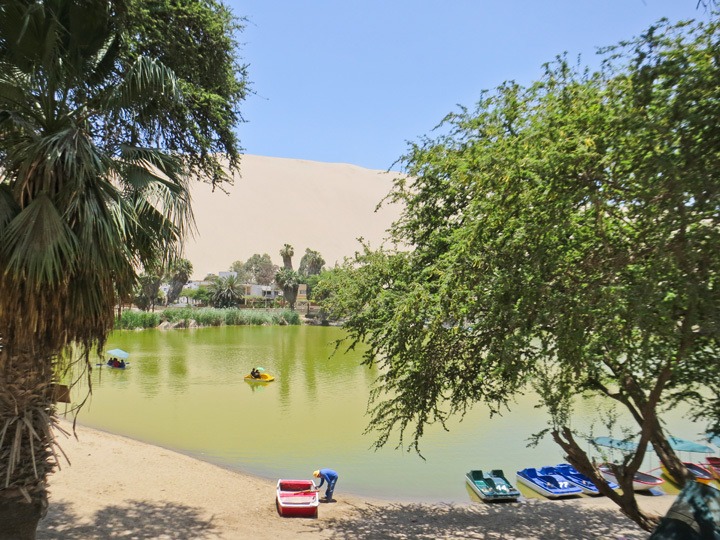 Within moments of arrival in Huacachina we had signed up for the town’s most popular attraction — sunset dune buggying and sandboarding tours. While filing into the Transformer-reminiscent vehicles, we noticed the rest of our group was intentionally ignoring the front two seats. We did no such thing.

As soon as we pulled away from the town and edged over the top of the dune, we were in another world where there was nothing but sand for as far as the eye could see. I was immediately reminded of the bizarre sand dunes of Mui Ne, Vietnam — the only other place on Earth I’ve seen such a phenomenon. 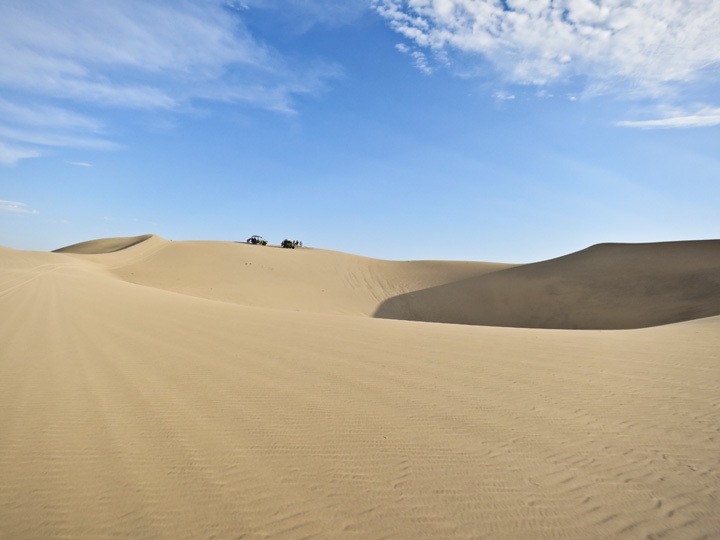 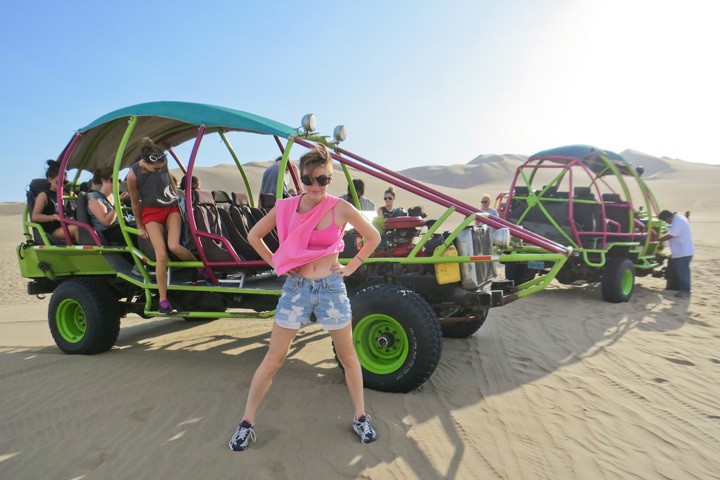 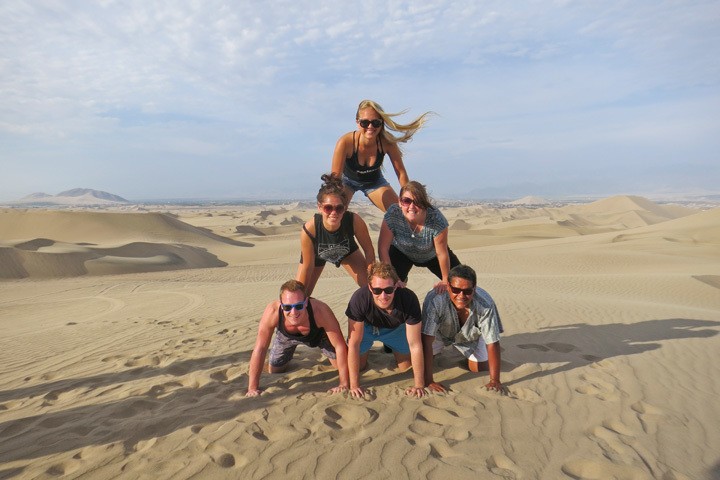 After a series of shriek-inducing twists and turns and roller-coaster like ups and downs, we pulled over in what seemed to be, quite literally, the middle of nowhere. Here, we admired the endless rolling hills of sand and the far away hints of Ica beyond. And took pictures. Lots and lots of silly pictures. 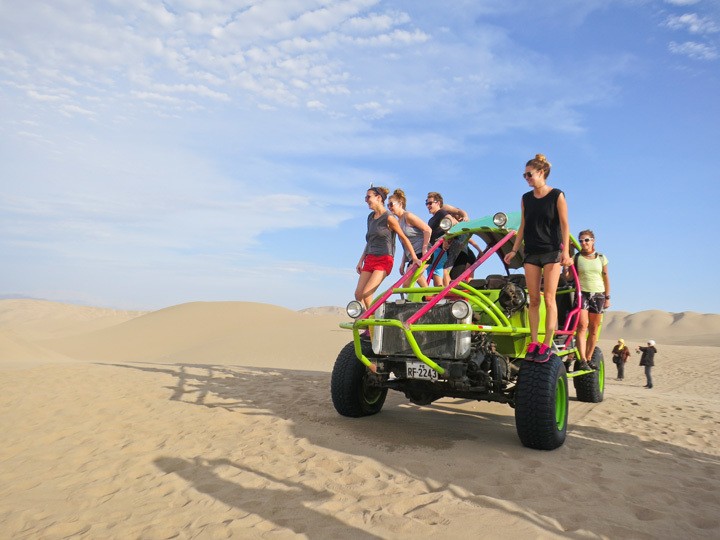 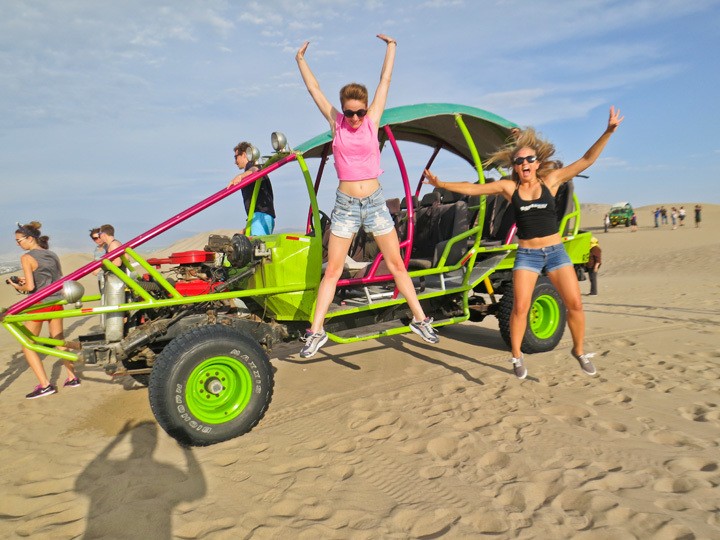 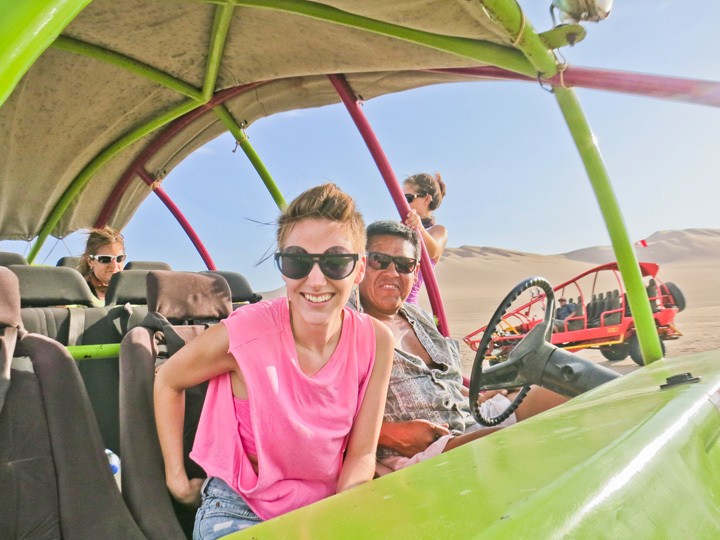 I would have been pretty thrilled with two hours of zooming around at our seemingly-crazed drivers’ whims and making cheerleader-style human triangles, but there was yet another activity on the horizon — sandboarding. This downhill adventures activity is surprisingly similar to its snow-based cousin. Which I am coincidentally also terrible at. 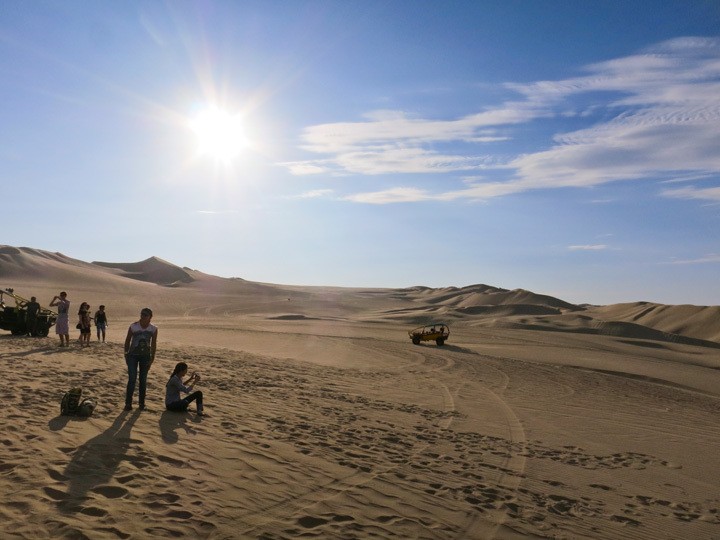 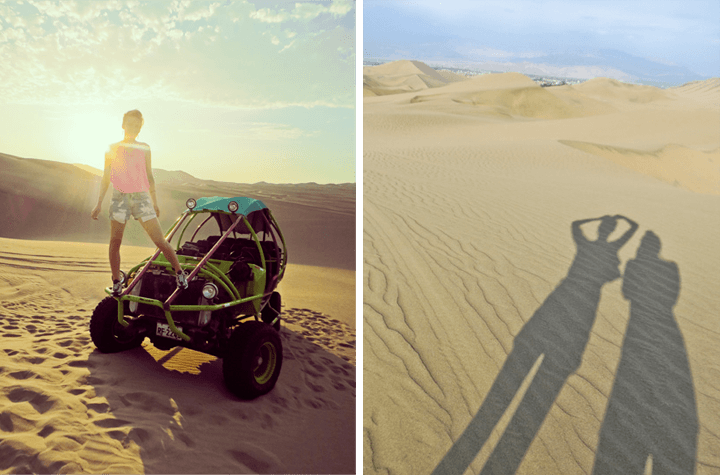 So how did we do? I think I can best answer that question with a video, shot with my brand new GoPro. You guys ask, I deliver.

I was shocked what a workout it all was! I admit that after a few runs standing upright, I got a little rattled by the injuries others in the group were starting to sustain — sandburns, bumped heads, and soon-to-be-bruised bodies, and I started going down sledding-style while laying on my front and digging my feet into the sand to slow myself down when I picked up too much speed. It was pretty glamorous looking. 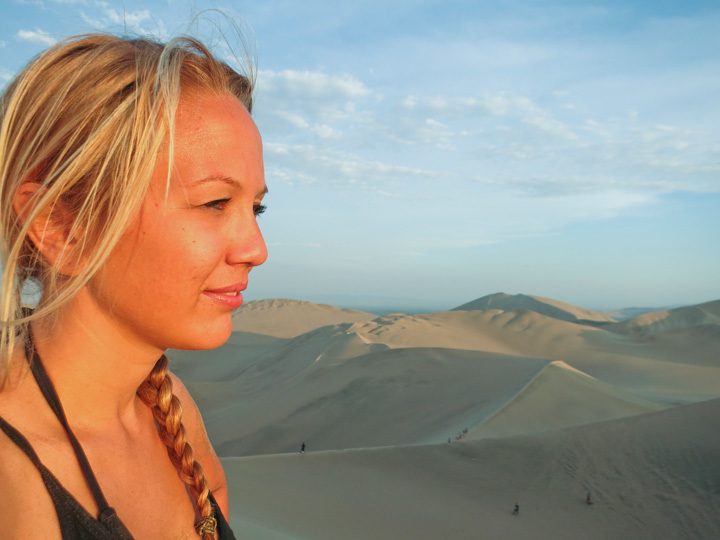 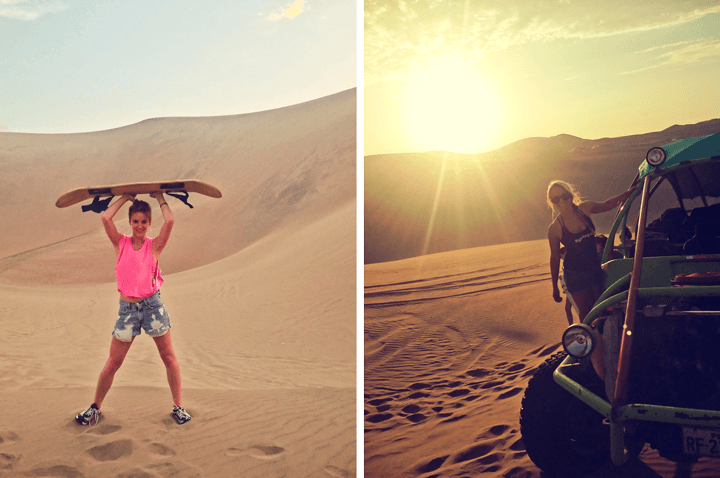 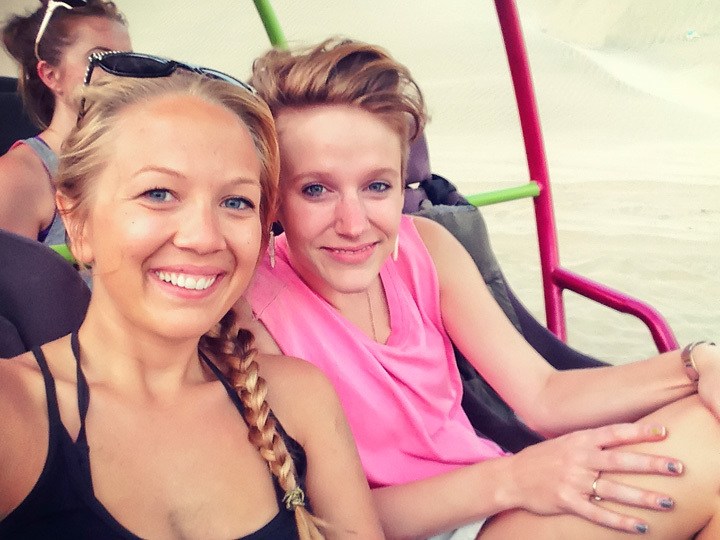 Once we were all sandboarded (and screamed) out, we made our way back towards town under the shroud of a stunningly pink and purple sunset. We were bumped and bruised and had sand in places we hadn’t known existed, and yet I couldn’t remember the last time I had had so much fun. Zoe summed up the outing perfectly: “This is isn’t even over yet and I already want to do it again!” 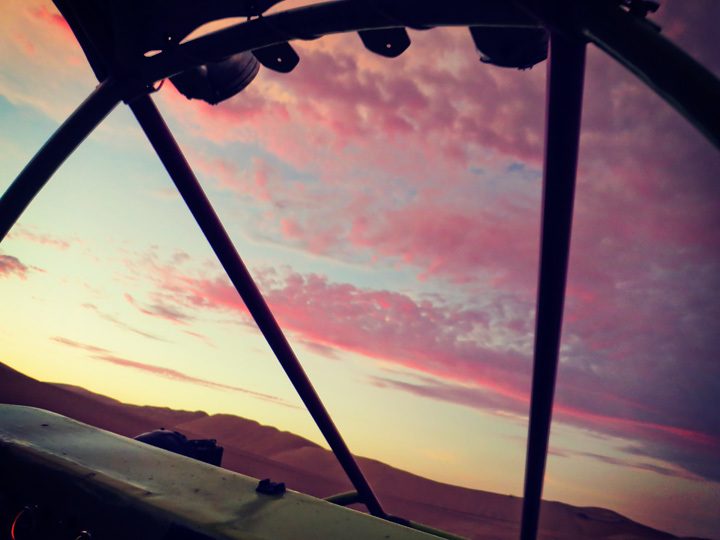 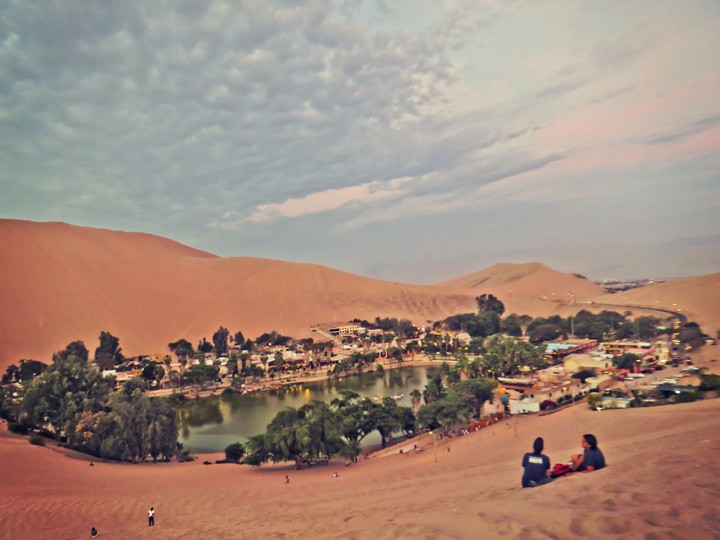 The next morning, we lounged around the hostel pool and discussed what to do with the rest of our time in town. We were on a tight schedule due to our looming Inca Trail reservation — just three days and two nights — but simply couldn’t turn up the chance to take a tour of nearby Ica’s vineyards. Peru certainly isn’t known for its wine, but considering my cahoots with all things quirky, I’m more likely to go for a tasting in Cambodia than Napa, anyway.

So we set off for a two-hour tour of Ica’s wineries. 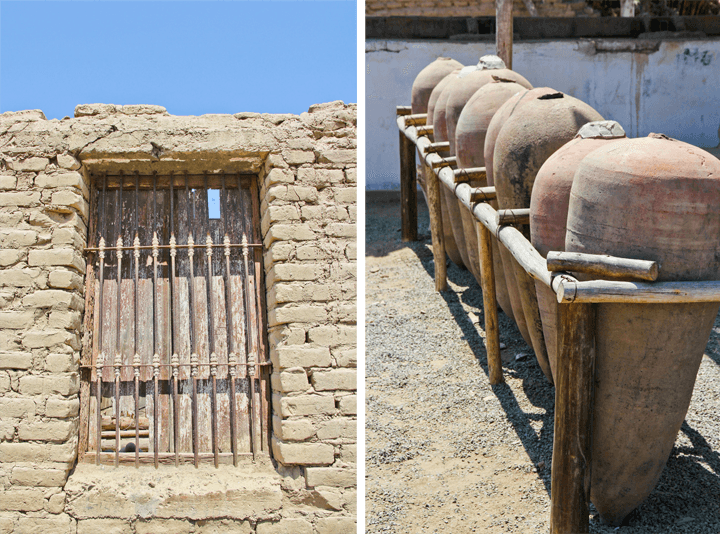 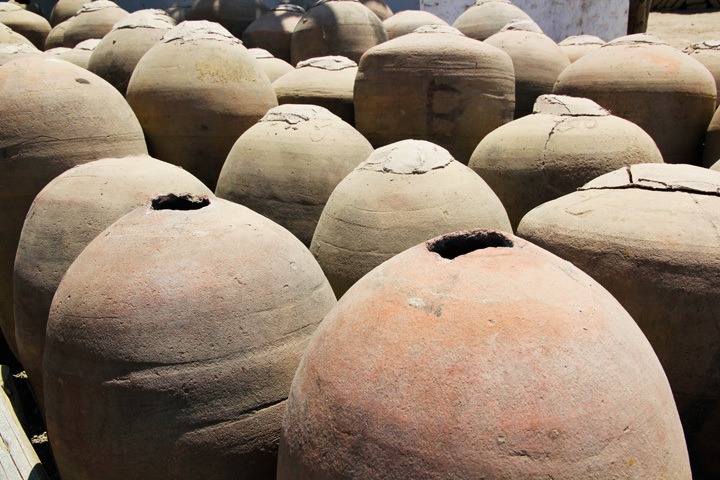 Our first stop was at El Catador, where we were given a tour of the wine and pisco making process before being ushered into a tasting room. Heads up to the sugar averse — and what the heck is wrong with you, anyway? — Peruvian wines are sweet. Zoe and I frequently remarked that we wishes we had some ice cream to go with the syrup we seemed to be tasting, a joke that only got funnier on our second round. Meanwhile, our guide was unintentionally hilarious. When asked if one of the bottles he was pouring us was popular around Peru, he grimaced. “This?” he shook his head, “This is not a good wine.” 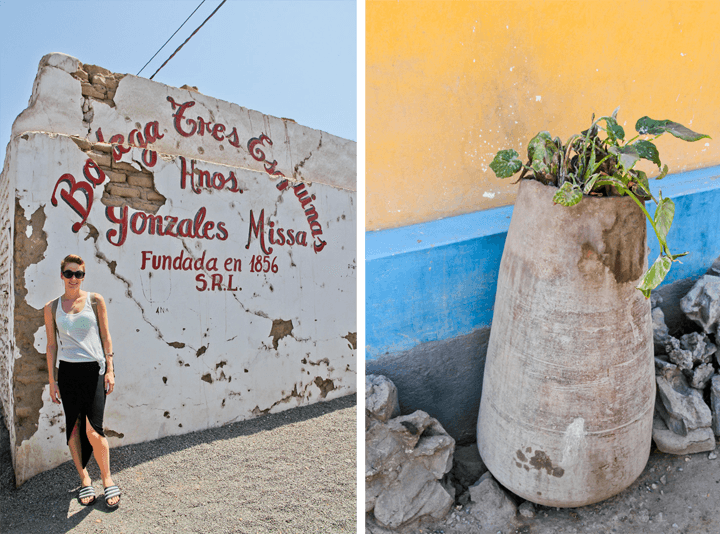 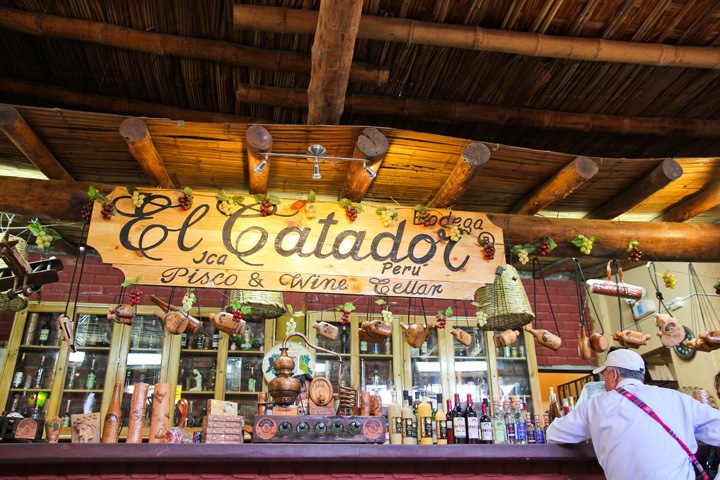 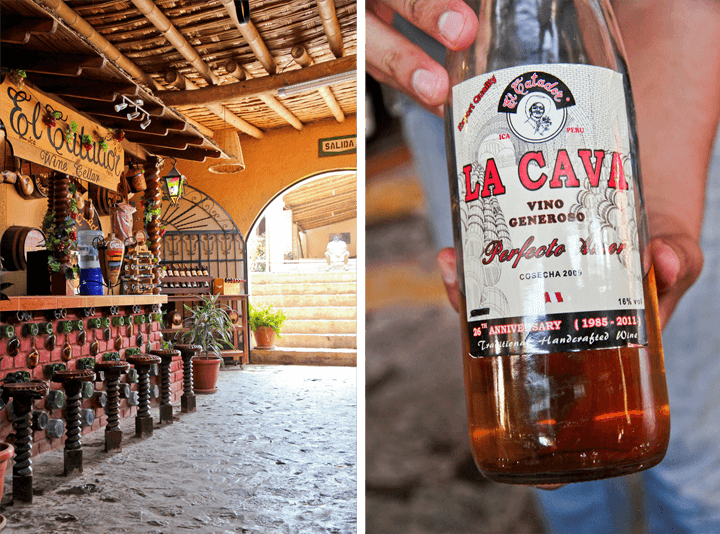 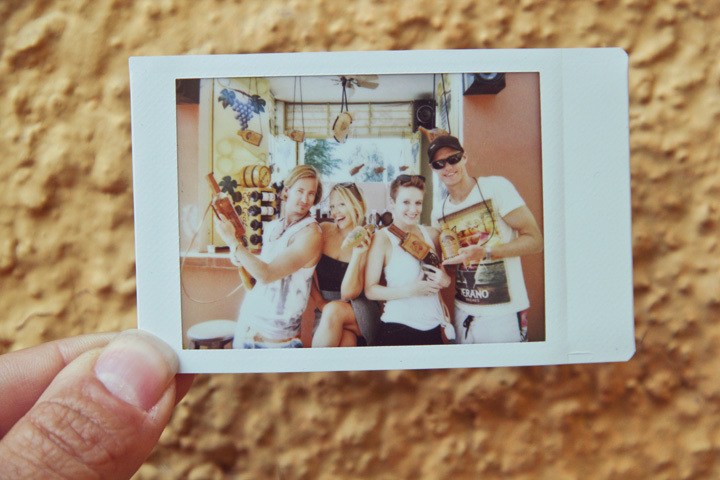 Unfortunately our day went downhill from there, as we realized that we had not joined the winery tour that we had been sold but rather a mind-numbing mini-van tour of Ica’s dusty sights. Luckily we had had quite a few shots at that point, which helped us get through what we would hence refer to simply as The Hostage Situation. Even more luckily, our hostel happily handed back the 30 soles ($11US) we had paid for the tour upon our return.

Huacachina was the perfect stopover on our journey through Southern Peru. While we had one more day of coastal adventures ahead of us (stay tuned!) I was already sad to leave this peculiar place in the desert.

Where I stayed: Banana’s Adventures
Where I ate: At Banana’s Adventures and at nearby hostel Desert Nights
How I got there: We took a Cruz Del Sur bus for the four hour ride from Lima to Ica, and I scored big time by snapping up the online sale seats ahead of time — less than $7US each! From Ica to Huacachina we paid 7 soles ($2.50US) for a ten minute cab ride.
In addition to the local sandboarding, you can use Huacachina as a base to visit many of the South Coast area’s attractions — the Ballestas Islands of Paracas, the Nazca Lines of Nazca, and the wineries of Ica.

Welcome to the Jungle

Biking, Bartending and Museum Browsing around Lima Photo of the Week 126
35 Comments...