A Weekend in Battambang Part II

Miss Part I of my Battambang weekend? Catch up here!

While we had gone to Battambang for the circus and the bamboo train, we also knew there was a beautiful countryside to explore. When we met a guide who offered to show us the train along with the rest the area had to offer for a mere $6 each, we agreed.

Phnom Sampeou is a mountain with a beautiful view and a horrifying history. To reach it, we were let out at the bottom of a hill and told to hike to the top. As we got out of the tuk-tuk our guide told us his parents were killed by the Khmer Rouge at this very spot. It’s a sobering thought; to think this man’s job is now to lead tourists to his parent’s graveyard.

A kid whizzing by on a homemade sled made us smile on the hot walk up the mountain. 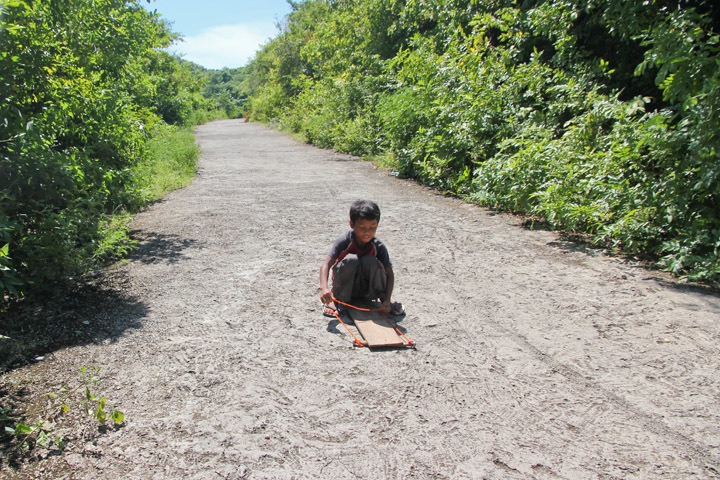 The views from the temple atop the hill were breathtaking, and made me wonder how many people in this world know how much natural beauty Cambodia really holds. 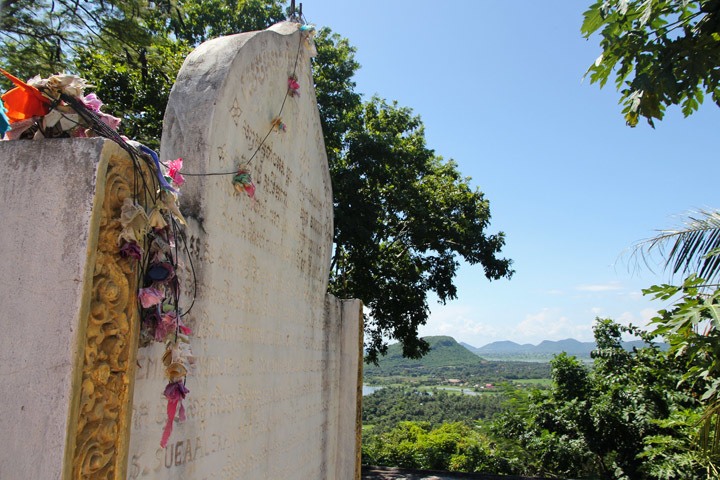 After, local kids guided us to the place that reveals the mountain’s dark past, the killing caves. The Khmer Rouge used these caves as dumping grounds for victims who were bludgeoned to death, stabbed, or simply thrown to their death. No one knows the exact amount of people who died here- but the amount of remains found point to the thousands. 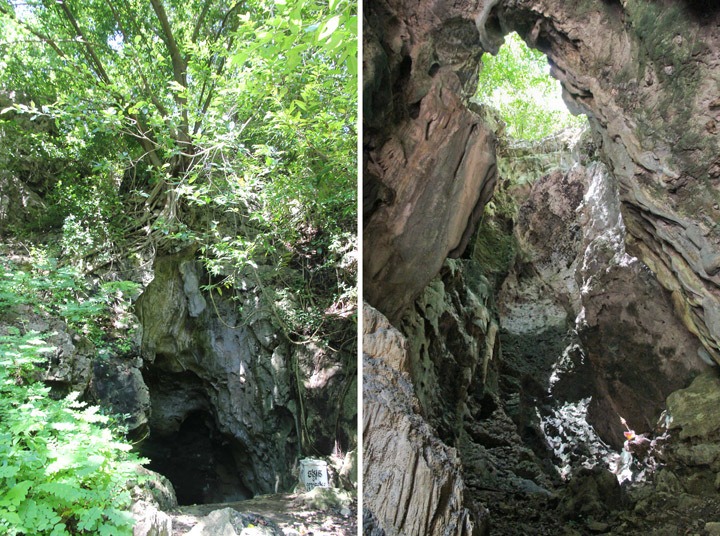 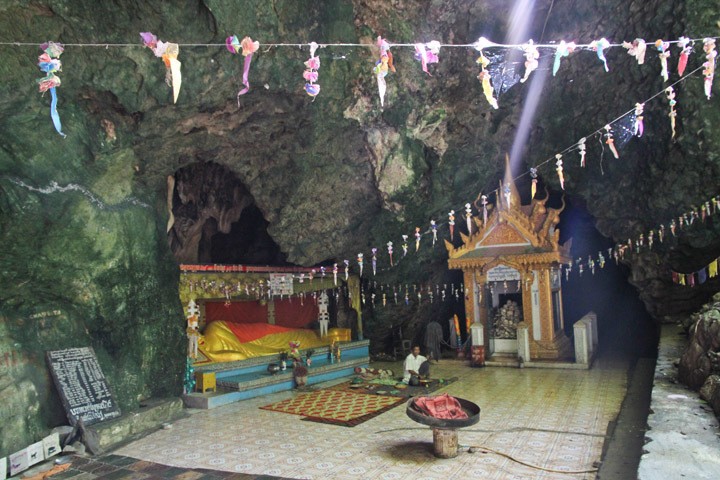 The inside of one of the caves now holds a pagoda and offerings to the dead. Some visitors may be disturbed by the piles of skulls in the pagodas. On a sunny, beautiful day where moments before we had been admiring a view and hours before we had been sunning ourselves on a bamboo train, it was hard to fully comprehend the horror of what happened here. It seems to be a common conundrum one finds themselves in in modern day Cambodia. 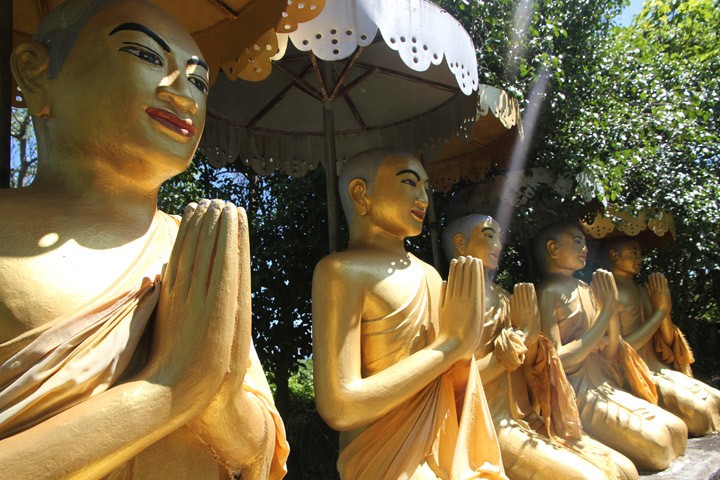 I was happy to emerge again to the sunlight and the beautiful grounds of a temple. We found a place to sit and reflect and were joined by a friendly monk who wanted to practice his English. He didn’t seem to need much practice to me, as he was able to crack clever jokes that made us laugh. 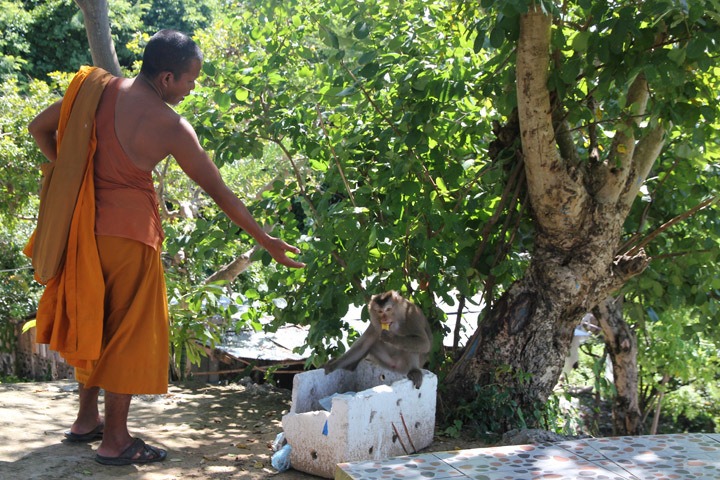 The grounds were covered in monkeys and hints to Cambodia’s Hindu past. I never seem to tire of seeing wild monkeys. I could watch their human like behavior for hours. 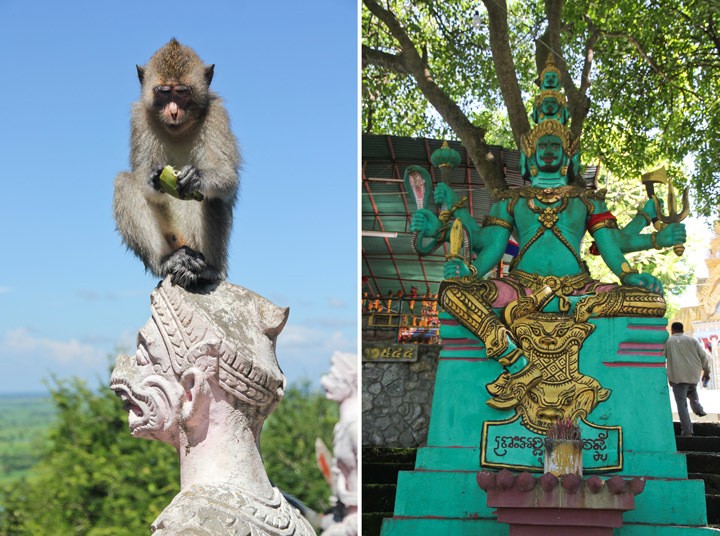 We made our way down the mountain via a winding, tree covered path. 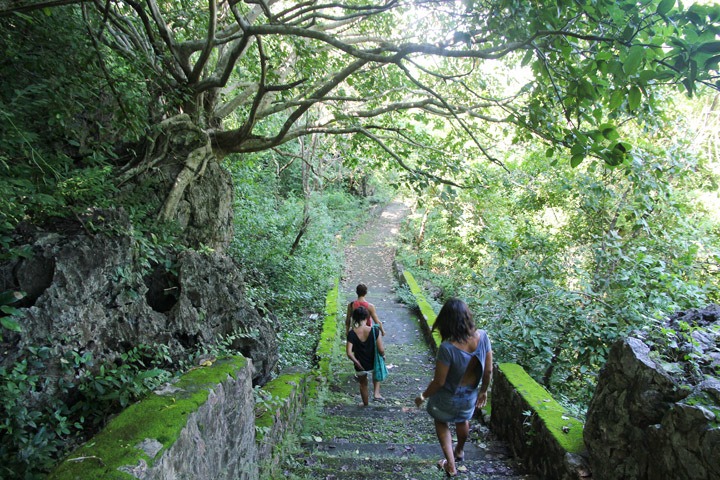 But not before saying goodbye to one more, slightly sleepy, monkey. 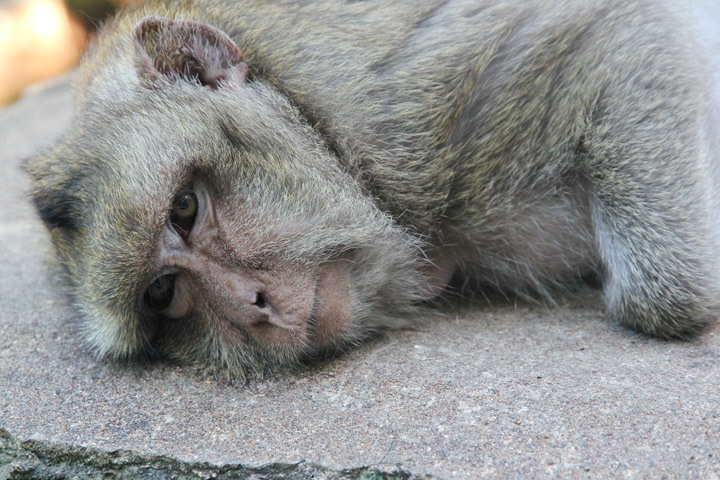 Look out Sonoma. Our next stop was of a much lighter variety, a visit to Cambodia’s first winery. 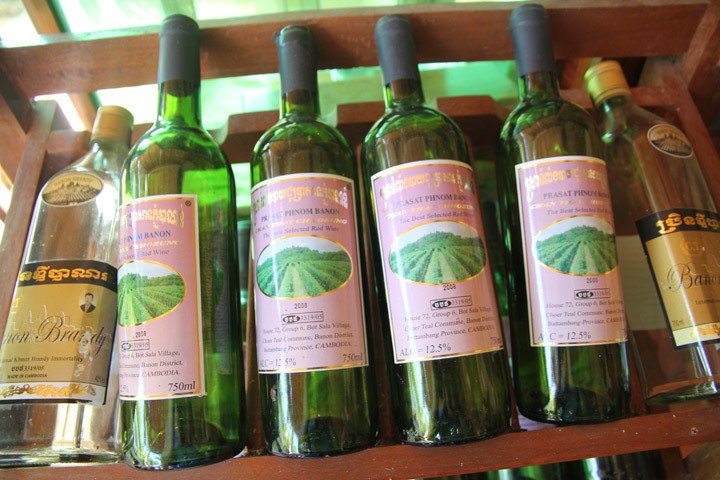 Our guide was quite proud of this addition to the world wine scene, and excitedly showed us photos from the Prime Minister’s visit to the vineyard. 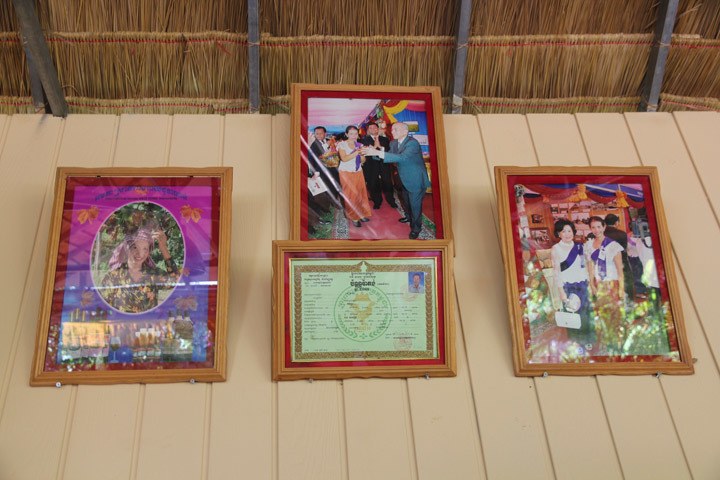 The grounds were small and certainly nothing like a full blown winery visit, but it was fun for the novelty value. Mark and I indulged in a little tasting as well. Results? Maybe Sonoma doesn’t need to watch out just yet. Some of the non alcoholic juices were quite good though. 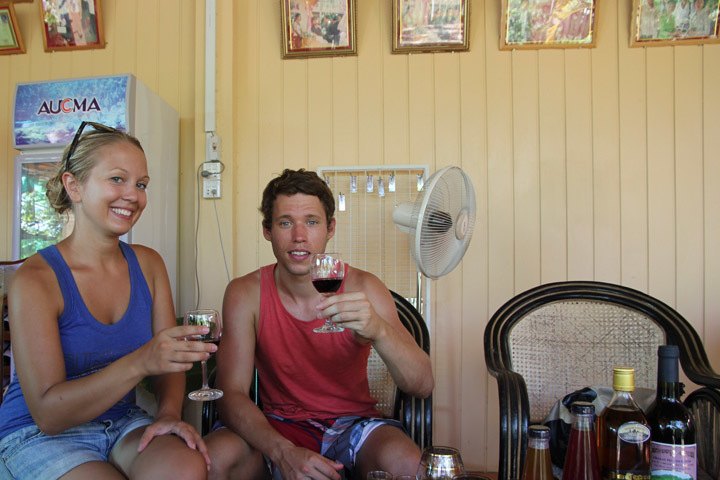 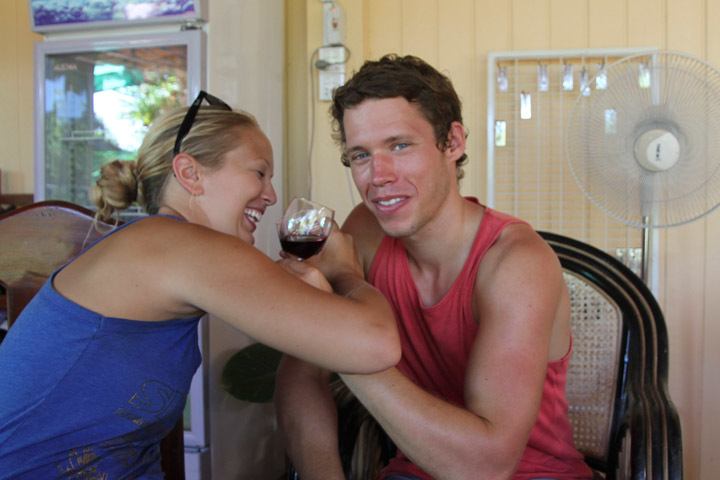 Have I mentioned that “phnom” means “mountain?” No? Well as you can see from the title, we were about to hike our second mountain of the day. This one came with stairs. Far too many stairs. Phnom Banan is an 11th century ruin older than Angkor Wat itself. The grounds are quite small, but in comparison to the more popular Angkor ruins around Siem Reap, you can truly have the place to yourself here. 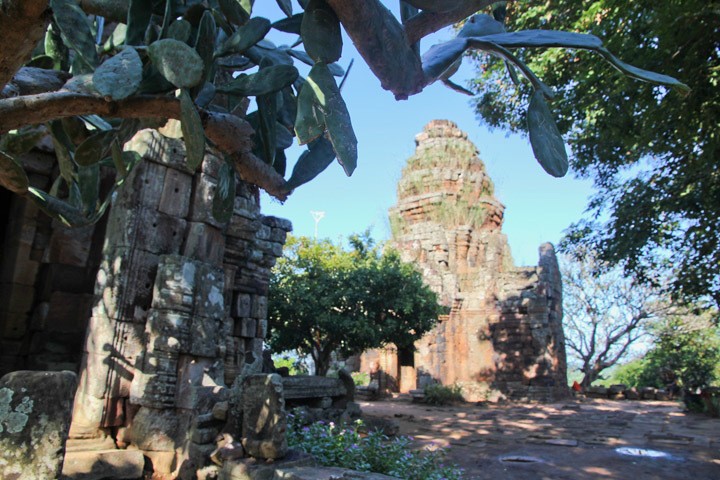 Unfortunately, this privacy has led to more modern day vandalism and graffiti was carved into everything, from cactus leaves to the ruins themselves. If only they just stuck to the cacti, which I think is a pretty clever place to sign one’s name. 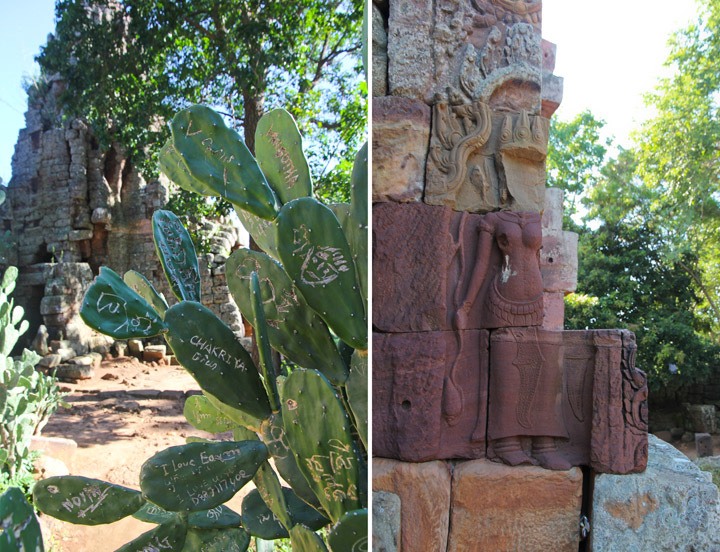 Our next stop was to a place we hadn’t read about in any guidebooks or brochures. When our guide told us we were going to see bats we kind of shrugged. Then, as we passed over a bridge, I heard an unmistakable shrieking noise and turned to see this view: 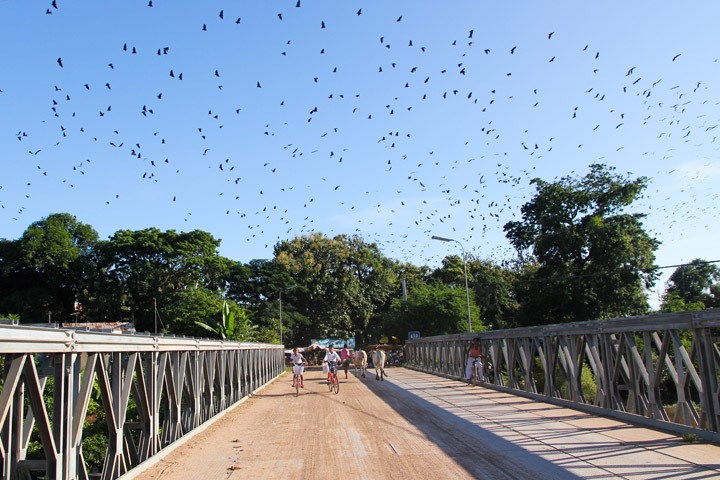 We walked into a temple grounds surrounded by trees thick with bats. Not only were there more bats than I had ever seen in one place, they were also the largest I had ever laid eyes on. 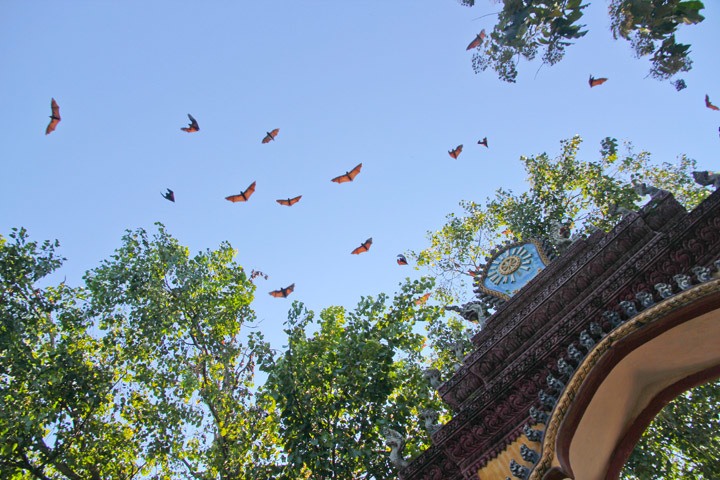 Just as I was shooting this video clip, I felt a splash on my shoulder. You might want to bring an umbrella here if you want to avoid being a bat litter box like me.

Again, when our guide told us that our last stop was “San Francisco Village,” our excitement levels were low. Yet when we pulled up in front of this bridge, I smiled in spite of myself. Built by the Swiss to replace an old death-trap of a bridge, the new one replicated the famous Golden Gate completely. Well, not exactly to scale. 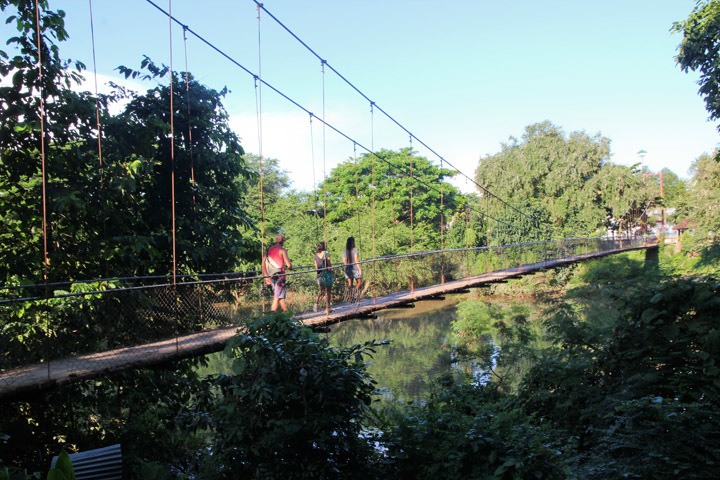 Living on both ends of the bridge (and traipsing it frequently by motorbike) was a laid back fishing community. We didn’t see any other tourists here. 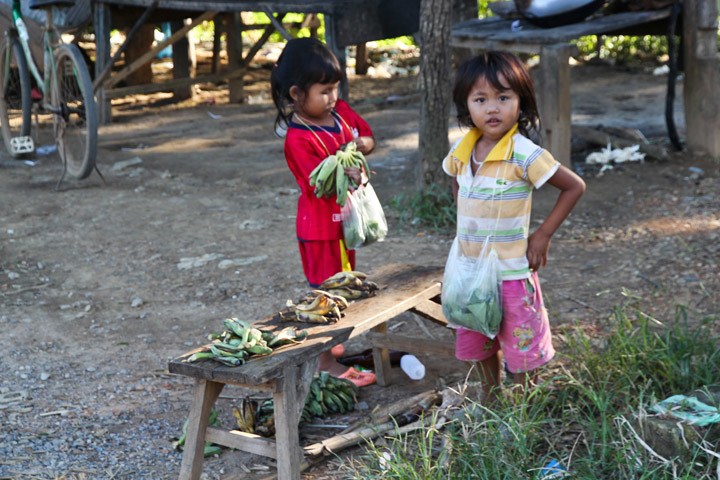 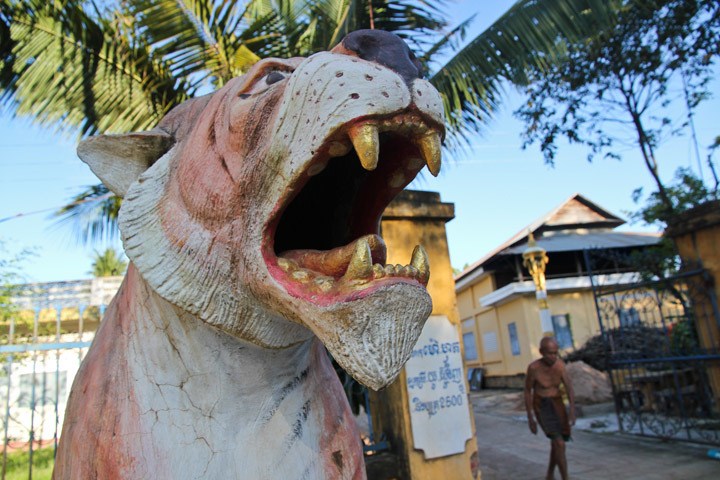 The best part of the day was not any of the attractions we visited above, but simply riding through the beautiful countryside outside Battambang. Kids ran out with excited cries of “hello!” Cows and water buffalo created traffic jams. Postcard worthy vistas whizzed by. I urge anyone with a few days to spare in Cambodia to make their way to Battambang. You won’t regret it. 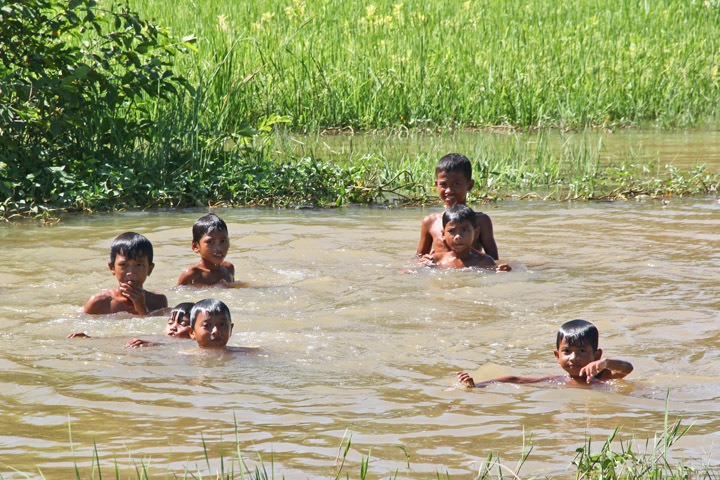 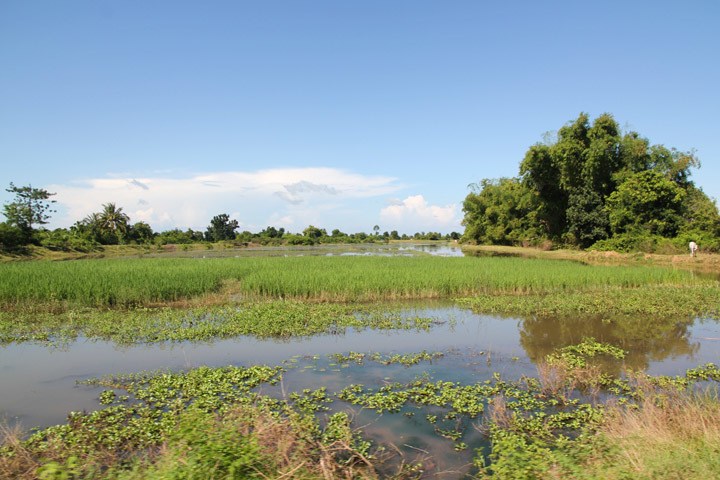 I’m sure there are many qualified drivers/guides in Battambang, but we were big fans of ours for his years of experience. You can reach Mr. Han Houn at hanhoun58@yahoo.com or at phone number 012.40.42.41 See the entire set of my photos from Battambang on Flickr here.