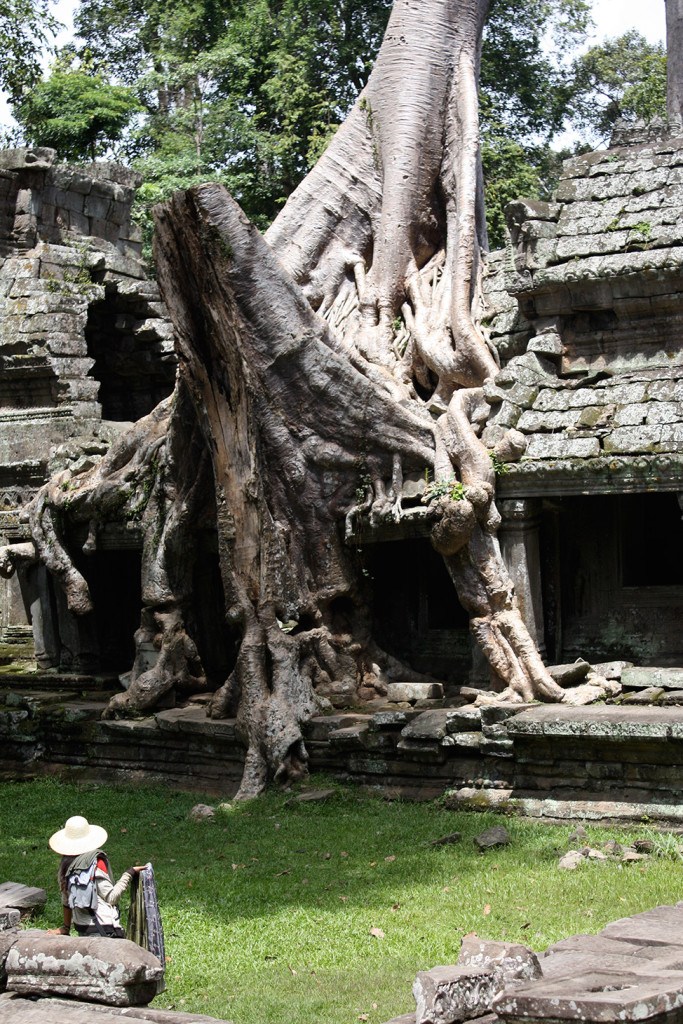 On our third and final day at Angkor we slept in a bit and checked out the final three temples on my list at a leisurely pace. We started at Neak Pean, a tiny but totally unique site that once functioned as an island temple with fountains and pools and animal sculptures- oh my! Like all the temples, it served an important function and the waters here were thought to have healing properties. The central structure sits in the midst of a lotus pattern of eight pools. I had heard the place was most photogenic in the wet season when the pools are full, but when we got there it was totally dried up. I didn’t mind, it meant we got to get up close and personal with the animal head water spouts at the center of the pools. 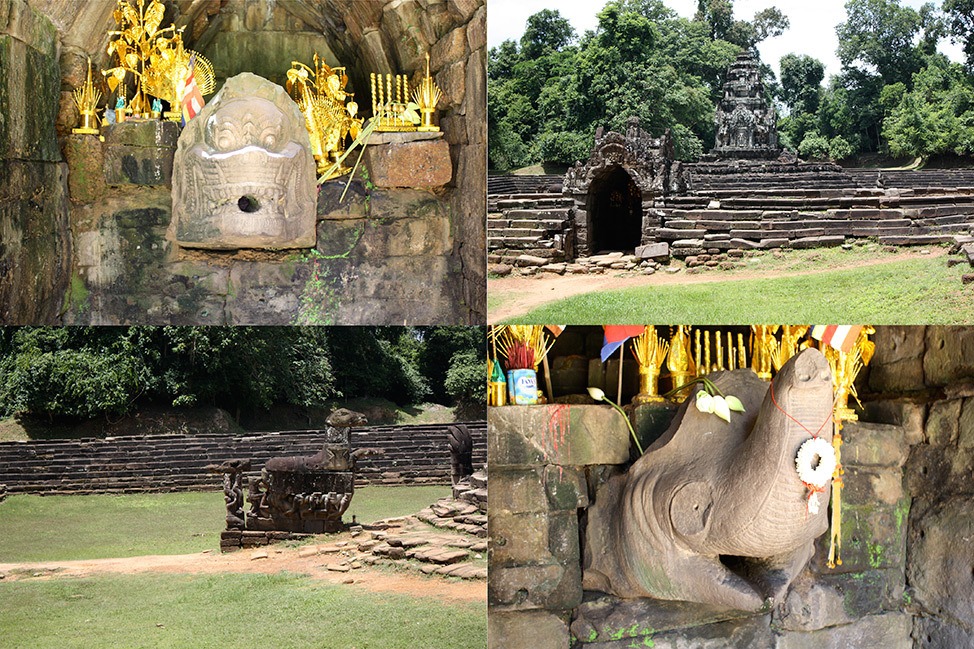 Preah Kahn was our next stop, and in comparison to Neak Pean it was a big one. It is a huge complex with tons of spots to explore and even its own little visitors hut full of informative displays, of which my father read every. single. word. 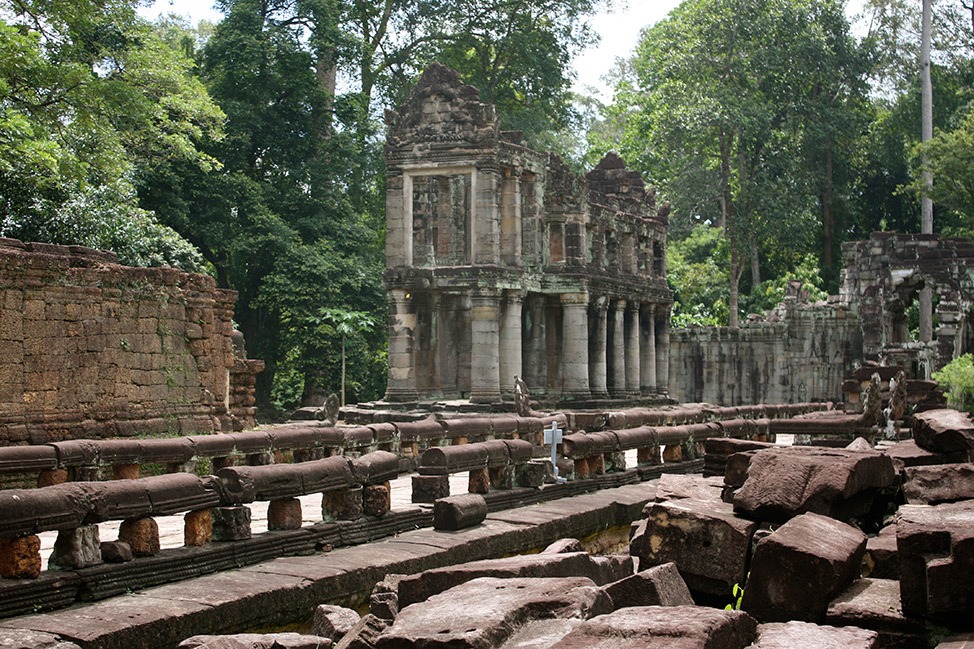 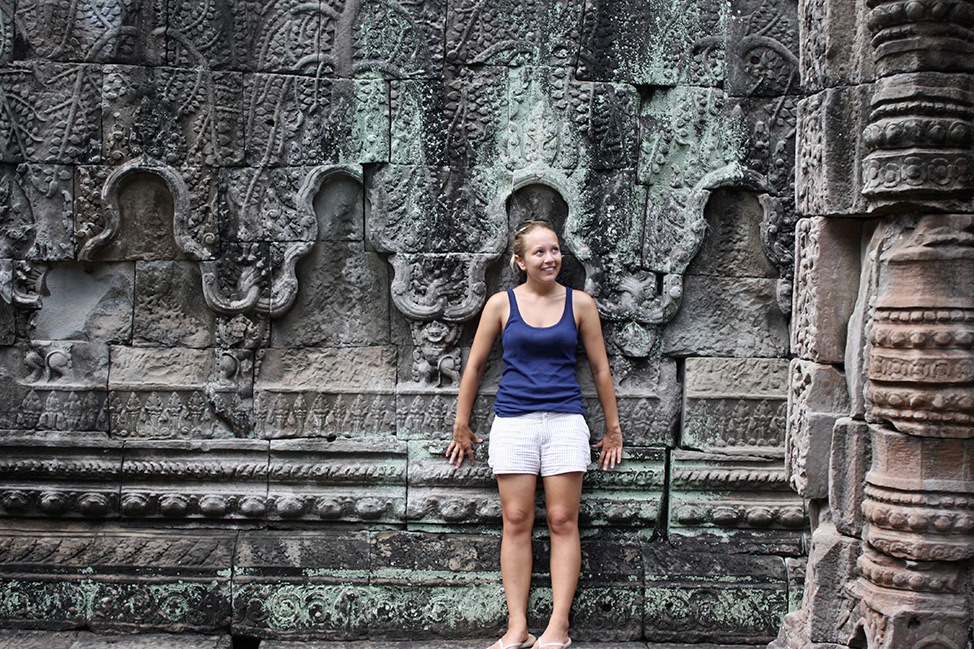 This would have been a memorable stop on its own, but it was made even better by the interactions we had with two Cambodians who shockingly were not trying to sell us something. Well technically one of them was but he didn’t assault us with anything so I considered him more of a soft sell as compared to most. We almost walked right by the quiet young man sitting in a corner sketching with a pile of drawings already next to him. As an artist who barely made it through foundation drawing I was impressed and tried to peek to take a look. He was a bit shy but showed us his work. We asked if they were for sale and he eagerly nodded and quoted a price so low we bought three. We didn’t catch him name so I guess we’re out of luck if he ever makes it big on the international art scene. 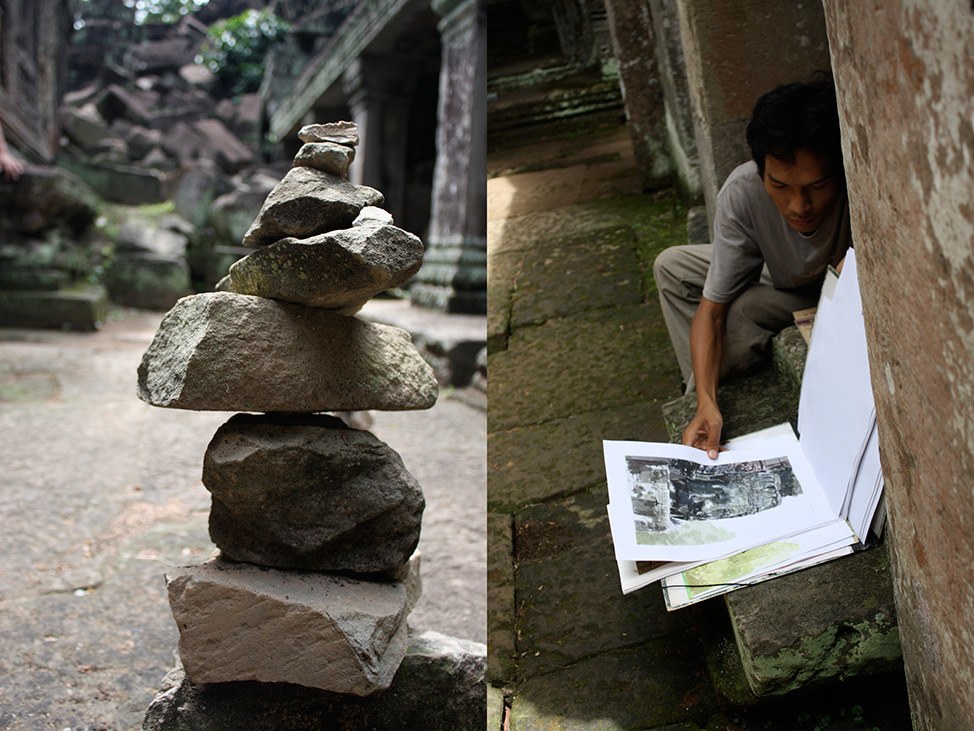 Our next encounter was with a very adorable young boy about the age of this kids I nanny for at home. He gave me a fright while lurking around behind some columns but I soon recognized the international language of hide-and-go-seek and played along. After a while of running around and shrieking laugher he came out and sat down and spoke some halting English to us. He told us he went to school in the afternoons and could count to ten in four languages. When I asked if I could take his picture, he flashed the peace sign. Oh boy. 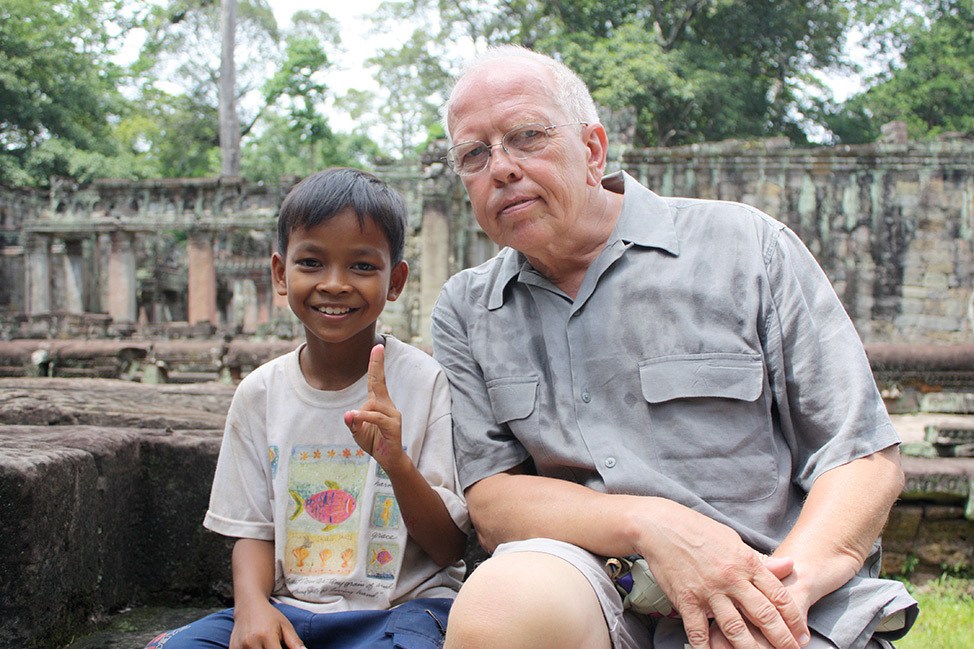 Our last stop on our Angkor itinerary was Ta Som, a small complex somewhat similar to Ta Prohm. I had one reason for wanting to see Ta Som: the promise of a photographic doorway being overtaken by an overgrown tree. It was quite the site and a great note to end on. With that we headed back to the hotel for an afternoon of pool lounging before our early departure the next day to Phnom Penh! 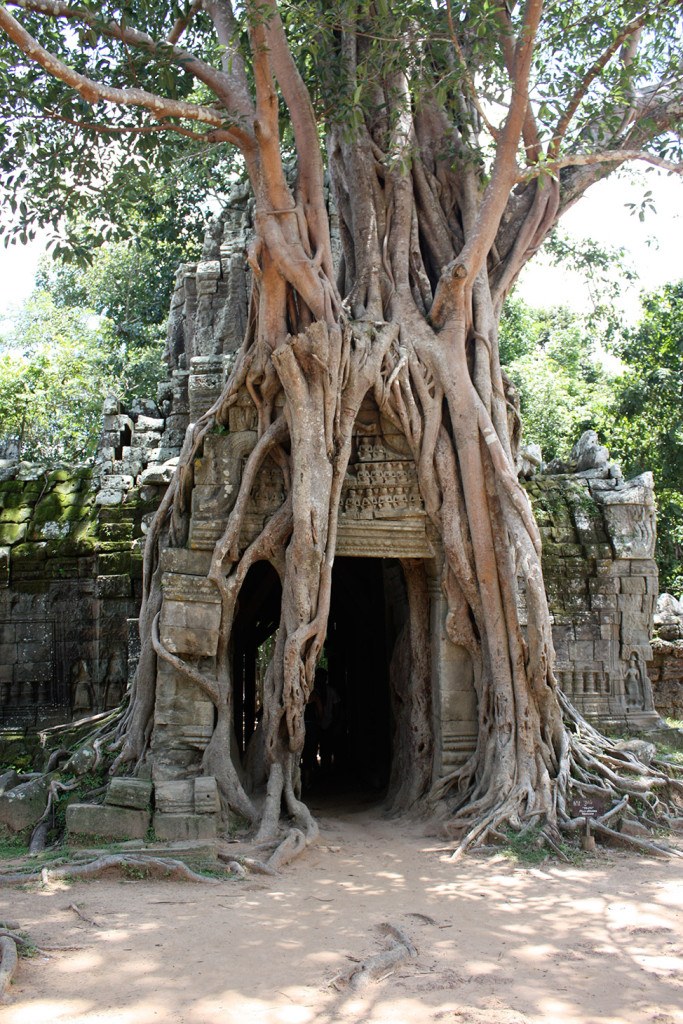 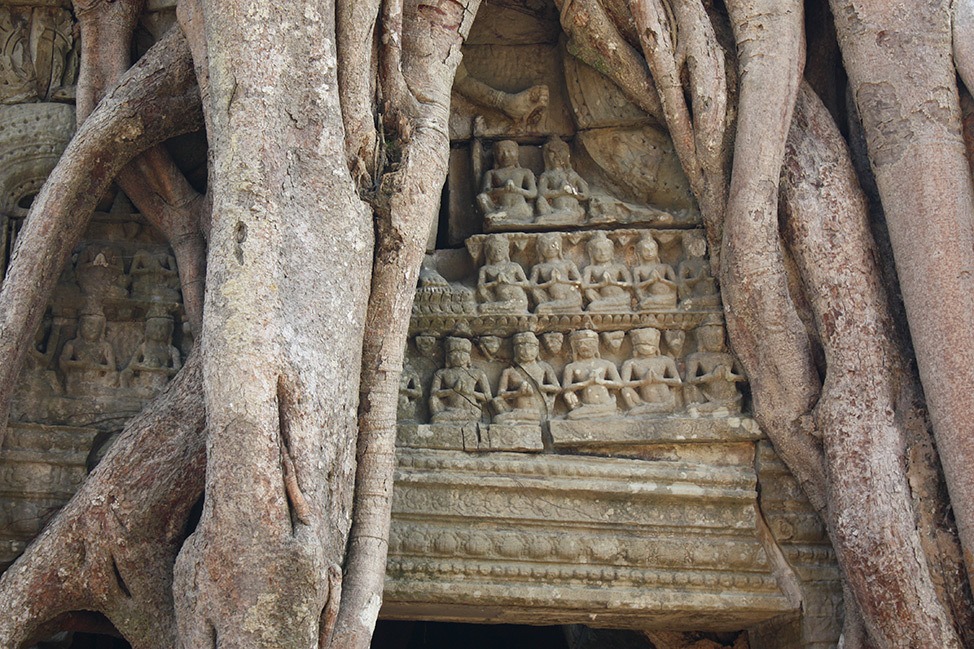 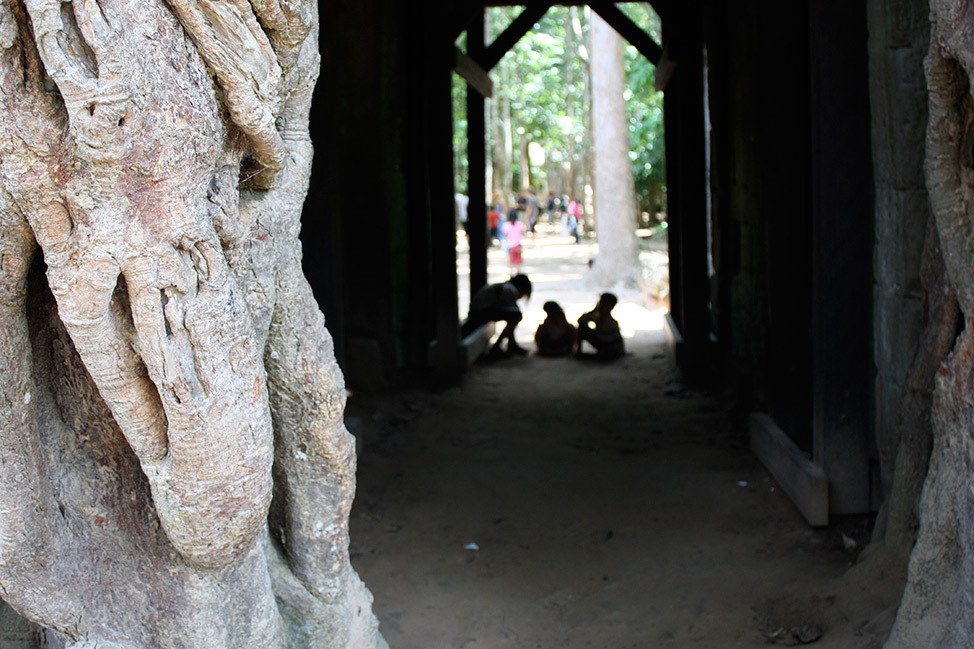 One note: We decided to forgo an official guide, and instead I relied on my Dad’s encyclopedic memorization of Lonely Planet’s Angkor Encounter guide to give me the backstory. If you aren’t a big reader or traveling with your own built in history buff, I would probably recommend a guide to get the historical background and significance of what you see. I’m sure we still missed out on something things going the DIY route, but it was made up for in the ability to go our own pace.