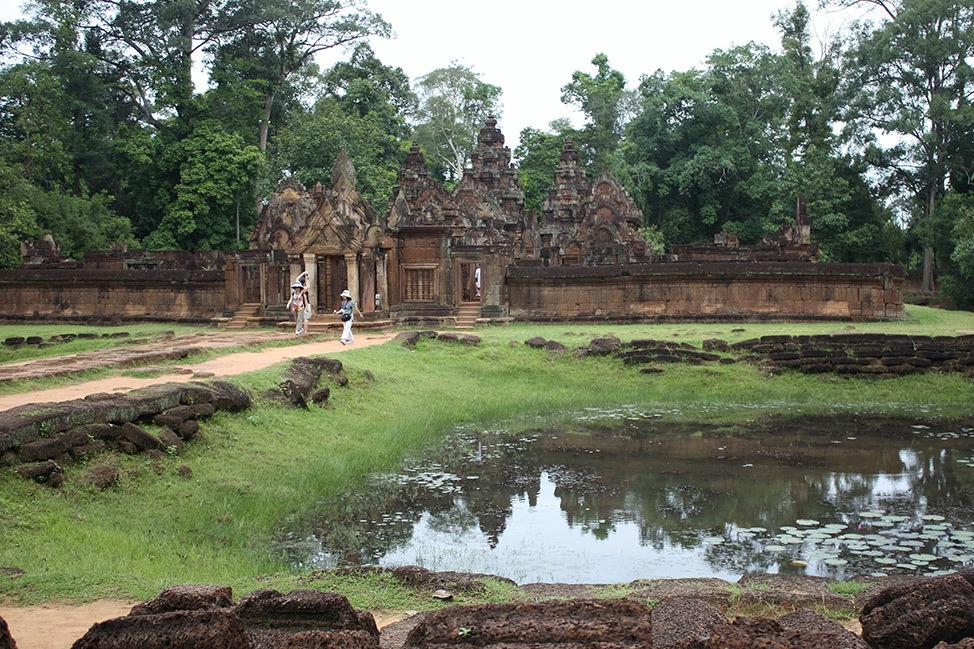 We started off our second day by making the journey out to Banteay Srei, a small and out of the way temple redeemed by its intricate and plentiful carvings. It’s name translates to “citidel of women” and with its small size, pink sandstone construction and ornate designs you can see why. It was a  beautiful place to wander around in the morning. 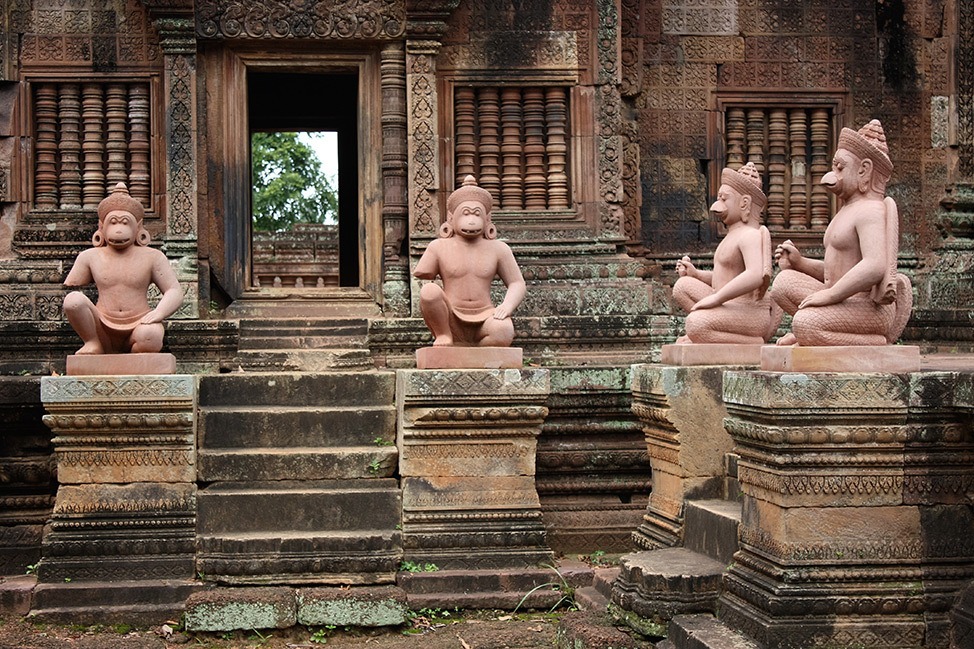 On the way back we stopped off at the small Landmine Museum. I almost wanted to skip this but I’m so glad we didn’t.  The place was started by a man who was a child soldier of the Khmer Rouge, laying mines all over the country. Now, as an adult, he has dedicated his life to removing the very mines he himself may have lay as a child, having no idea what devastation they would bring. The staff of 17 assists in deactivating mines and keeping up the museum, as well a housing 20 children, most of them victims of mine explosions. One only has to walk around the streets of any city in Cambodia and see the breathtaking number of amputees begging to grasp the enormity of this problem. The entire enterprise is run on a budget of $3930 a year. Its sobering to imagine how quickly that kind of money is spent at home on fancy dinners and designer shoes. We had a quiet ride back to the main complex. 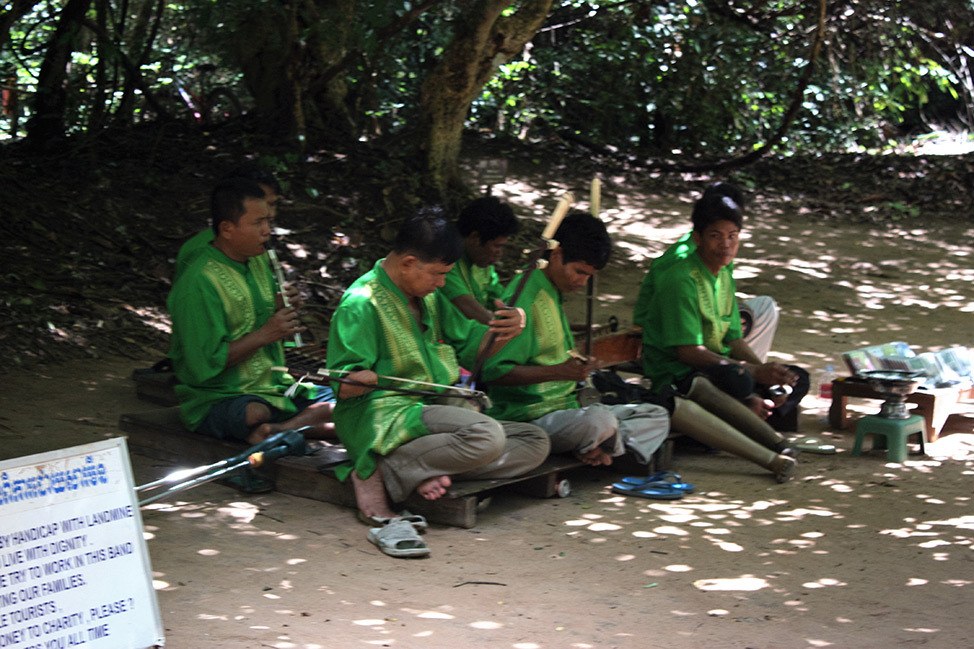 This band of amputees demonstrate the horrible landmine problem

In the afternoon we visited three temples, Pre Rup, Bantei Kdei and my favorite temple, Ta Prohm. I hadn’t been too concerned with visiting Pre Rup, but between the very few other tourists and the sheer size it is impressive. Bantei Kdei is similar to Ta Prohm but in my opinion inferior, and I would say skip it all together if not for the very beautiful views next door at Srah Srang, a beautiful baray. In the dry season you can even see the remains of an island temple in the middle of the lake! 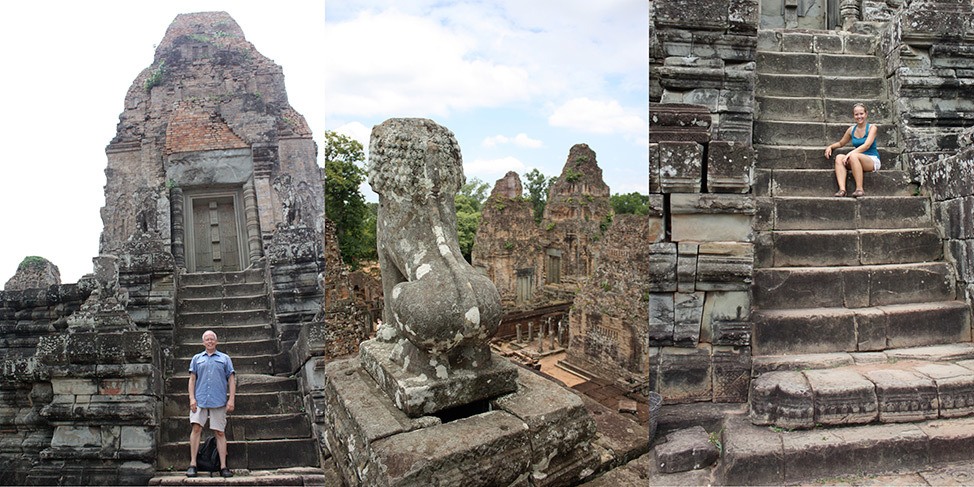 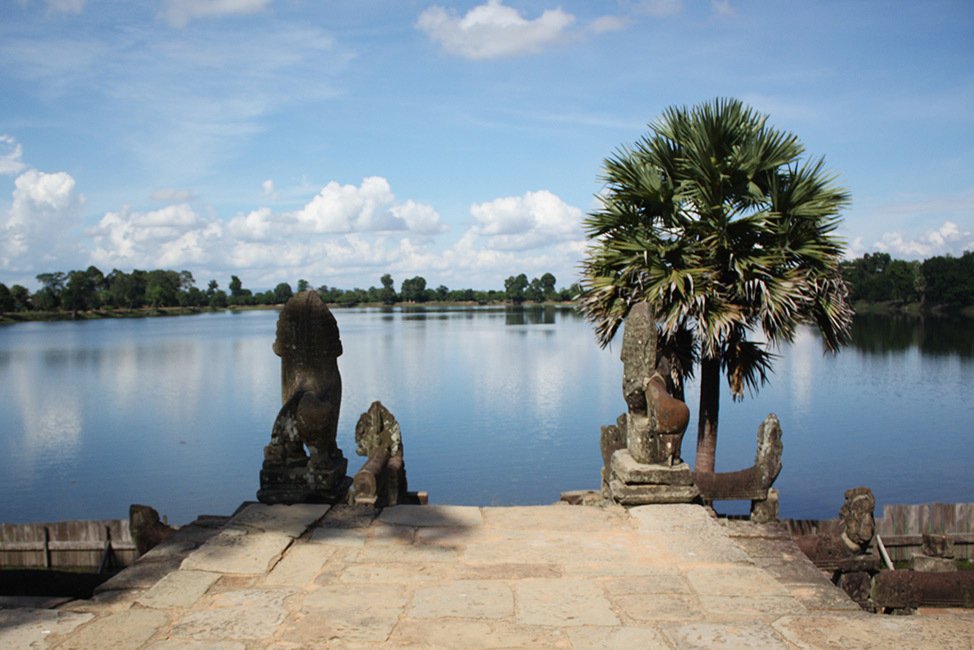 Ta Prohm has been left in very much the same condition it was found, the jungle swallowing back up the ruins with trees growing from out of doorways and roots pushing over pedestals. It has intentionally been left partially unrestored, allowing you to imagine how it would feel to be the one discovering the “lost” city of Angkor (give or take a few hundred tourists). Thanks to the movie Tomb Raider, this is what people picture when they picture overgrown temples in the Cambodian jungle, and visitors will not be disappointed. A total must see. 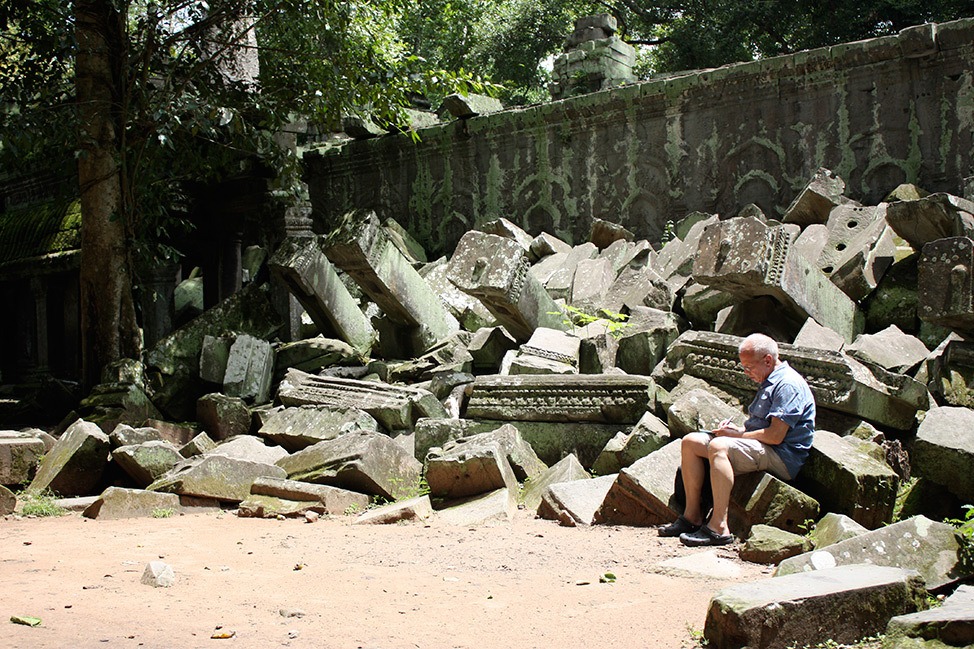 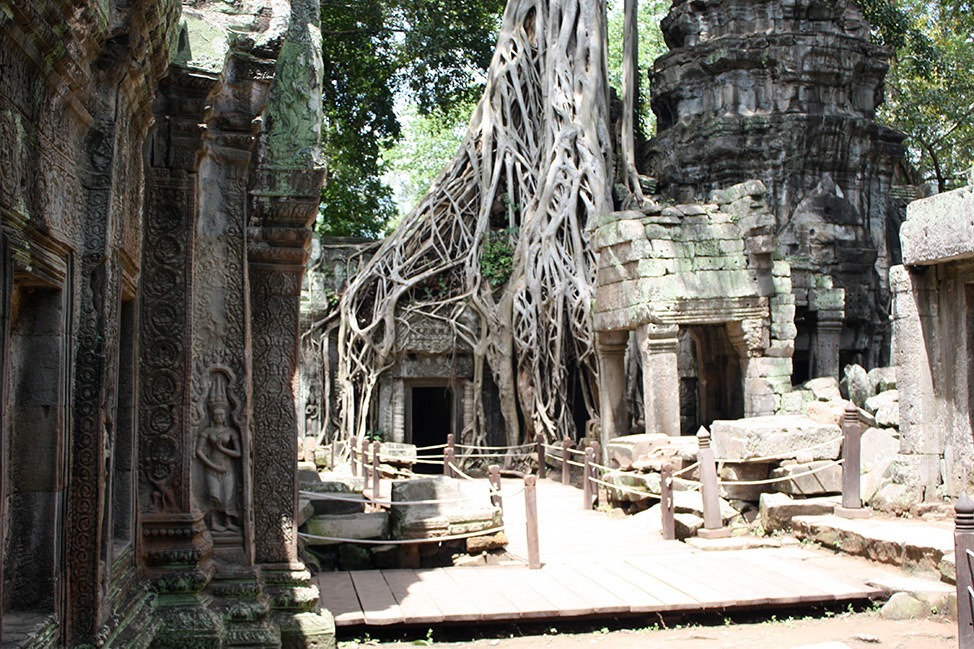 A similar shot was in the National Geographic spread- fancy! 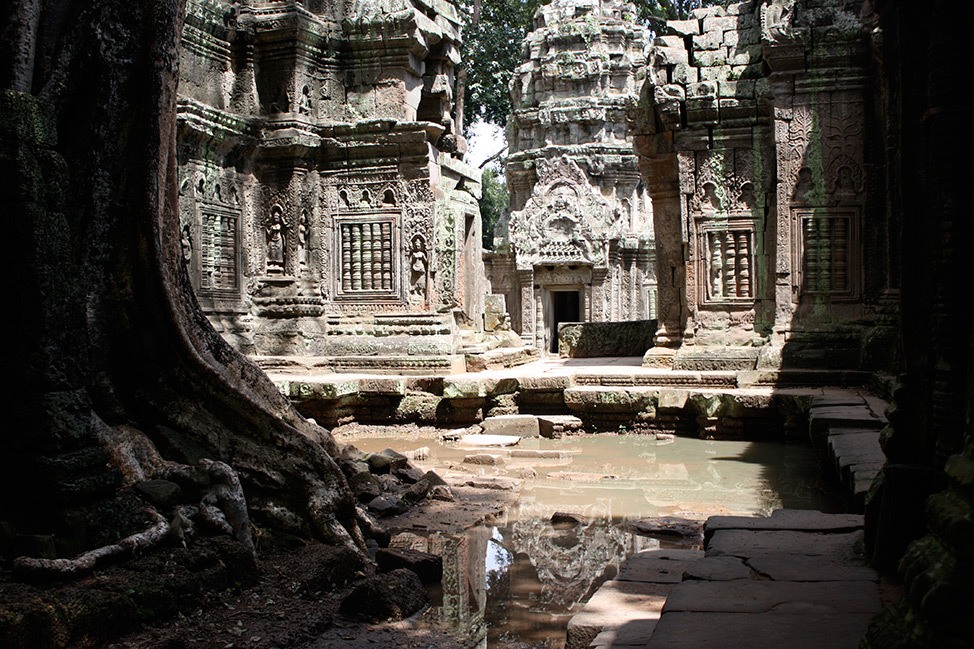 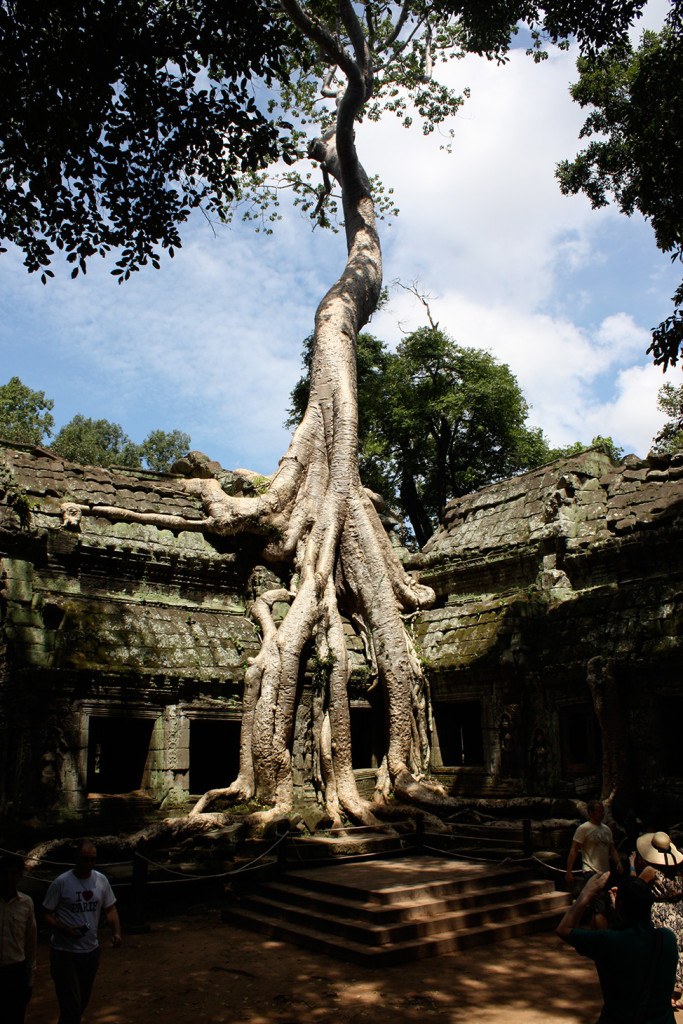