“Were the restorative powers of Oceania so great that a sick man could reclaim a life of wonder? Could a person, adrift in the continental world, find redemption on the temperate islands of the Pacific?” 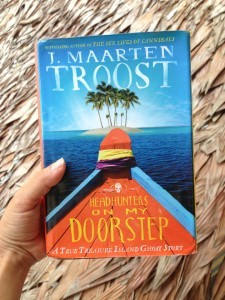 Headhunters on My Doorstep

is the third book I’ve read by author J. Maarten Troost, and his fourth title. His first memoir, The Sex Lives of Cannibals

, was one of the funniest books I’ve ever read — a tough act to follow, and his subsequent release, Getting Stoned with Savages

, regrettably did not rise to the occasion. Typically, I look for travel memoirs to destinations I’ve either been to or am heading towards. Despite the fact that I have no plans to head to the South Pacific — where all three of the Troost titles mentioned here are set — I love a good written word-induced laugh and was excited to dig into Troost’s latest misadventure.

author Robert Louis Stevenson through the islands their mutually beloved South Pacific — from the Marquesas to Tuamotus, from Tahiti to Kiribati, and finally to Samoa. However, there’s been a distinct change in the author’s life since his first trip to Kiribati over a decade ago — he’s now a post-rehab recovering alcoholic. Troost shares his journey with self deprecating humor, a knack for storytelling, and insights into the life of a perpetual wanderer. In addition to his own anecdotes and insights, Troost provides background on both the islands themselves and also Stevenson’s travels between them, more than 150 years prior.

Unlike Troost’s previous books, this one is not purely a travelogue — in fact, at times it feels more like an addiction memoir than a travel one. Reading Headhunters on My Doorstep was like catching up with an old friend at a college reunion and finding out what’s been going on in their life since you two last hung out (obviously, in this analogy, that friend does not have Facebook.) I was surprised and interested — at first — to hear that Troost had struggled with alcoholism. Sure, he wrote frequently about mind altering substances, but half the expats I know in Southeast Asia arrived on vacation and woke up five years later drunk on the beach. Heavy drinking is fairly common among those with a penchant for escapism.

I laughed. As someone who has suddenly found writing to be a part of her self-designed job title, I am blown away by Troost’s ability to craft laugh-out-lound funny sentences on such a regular basis. Now a four time author, I enjoyed when Troost wrote about writing. His description of the french reverence for the profession (“People just assume that you’ve already won the Noble Prize in Literature — twice”) alongside the American reaction (“People look at you fondly, and then they tell you exactly what they wanted to be when they were little — before they grew up and became responsible adults”) had me in stitches.

In fact, Troost is always at his best when contrasting his own culture with another, such as when he compares the phenomenon of a bachelor party to a solemn Marquesan tradition in which men are sent into isolation on the remote east coast of the island to prepare for marriage and fatherhood. Another favorite anecdote from Headhunters on my Doorstep include Troost showing up at 6am for an 8am flight to a remote atoll, only to be told the pilot decided to leave early. When’s the next plane? Maybe next week. One story in particular caught my attention — a new Cuban embassy and influx of Cuban doctors had the island of Kiribati aflutter with rumors of organ harvesting — an unlikely theme that seems to be cropping up in my recent choice of books.

My absolute favorite section of the book was the author’s return to the subject of his debut memoir, the island of Kiribati. Unsurprisingly, not all of the islanders’ appreciate being memorialized in a humor-based book by the title The Sex Lives of Cannibals. Still, Troost’s writing is most alive in this place that clearly has so much meaning to him. 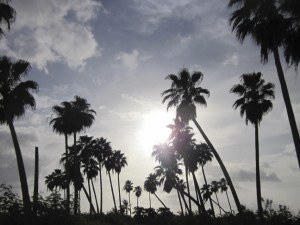 On a personal note, I often marveled at how many sections of the book seemed written directly at me. How could it not, with tidbits like this? “While spending a winter in Upstate New York, it occurred to [Robert Louis Stevenson] that it might be an excellent idea to set forth for the South Seas. Well duh, you think. That’s what everyone says after spending a winter in Upstate New York.” As an Upstate New Yorker who now only returns home when the thermometer hits above 70 degrees, I giggled with particular glee at that tidbit of Stevenson’s past.

While I have never read Robert Louis Stevenson’s work and knew nothing of his life before this book, I too soon felt a kinship with this loquacious vagabond. “‘I travel not to go anywhere, but to go,’ he wrote. ‘I travel for travel’s sake. The great affair is to move.’ He was irrepressibly restless, a born wanderer.”

Any long term traveler or expats will relate to Troost’s frequent and spot-insights about the lifestyle. I could have written the following myself — “I too had felt the siren song of escapism, the urgent desire to say to the world I’m outta here and depart for a sunny shore on the far side of the world… I soon learned, of course, that paradise would forever remain a day’s sail away, that islands, even balmy, tropical ones, are real places with real people with real problems.”

This book had three different storylines vying for attention — Stevenson’s journey, Troost’s journey, and Troost’s reflections on his addiction. The latter was the least interesting to me, yet often seemed to take up the most real estate on the page.

I’m sure writing about his struggles with alcoholism was a cathartic process, but it grated on me as a reader. Long anecdotes relaying Troost’s time at home — in denial, then in rehab, then finding a religion — had me skimming the page. He applies the same dogged interest in understanding the science and process and recovery of addiction as he does to understanding other cultures. But in this case, it’s just a little too self indulgent, a little too ho-hum.

I believe the alcoholism story line would have been better served as a separate book, one marketed towards the addict memoir market.

Travelers heading to the South Pacific, passionate runners (Troost trades his penchant for booze for a pair of running shoes), post-rehabbers, equatorial sailers and lovers of humorous memoirs.

Today I’m giving away a brand new hard cover copy of Headhunters on My Doorstep to one of you! Think of it as a virtual free bookshelf at your favorite hostel. Readers from all countries are welcome to enter.

The giveaway copy of this book has been provided to me, at my request, by the publisher. The link in these posts are Amazon Affiliate links, and I will earn a small commission from any resulting purchases. Thanks for helping to keep Alex in Wanderland running!