Tempting Fate on the Nazca Lines

Subtitle: Seriously I Could Have Died, Okay?

On our final day in Huacachina, we were faced with a tough choice — have a peaceful and relaxing day lounging by the pool, or pay oodles of money to stuff ourselves into tiny planes and, statistically speaking, likely vomit all over ourselves before crashing to our deaths (data backs up the puking, not the dying, though that’s not unheard of either).

We chose the latter. I blame Zoe. 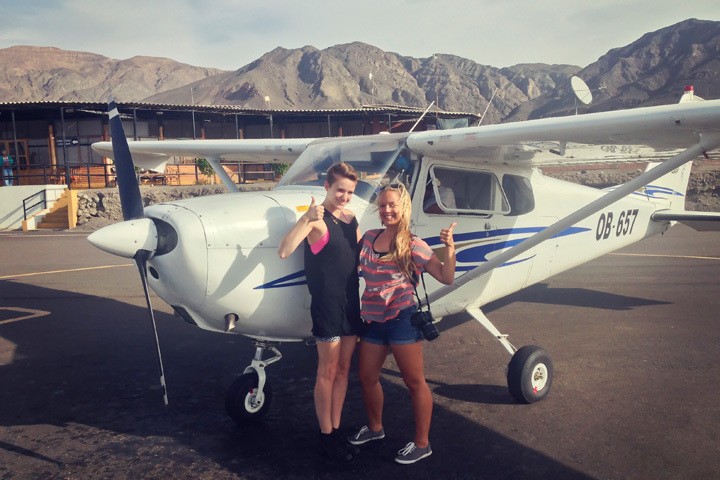 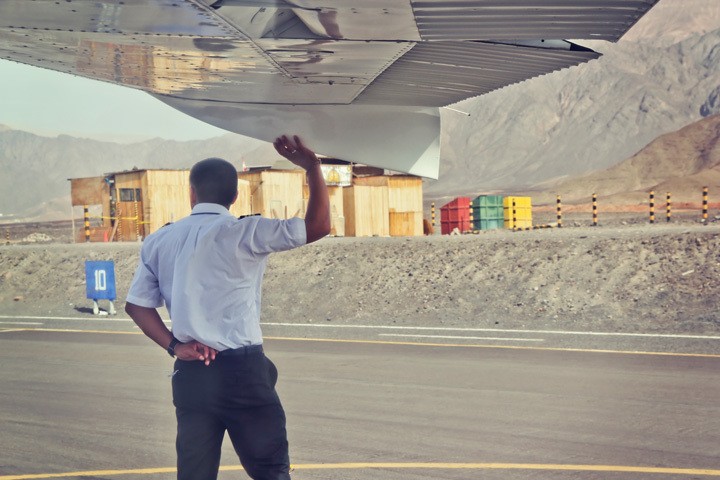 Over the years my relationship with flying has gone on a strange roller coaster ride. When I was just a wee traveler, I had some mild flying anxiety, most likely co-opted from my mom, who couldn’t step foot on a plane without Xanaxing herself into a happy place. As I got older I shed whatever fears I had and would sleep peacefully through even the most turbulent flights, ones that would leave most passengers white knuckled and praying. Lately though I’ve felt my old nerves slipping back in, making me tense up at takeoff and give a little cheer upon landing.

So had I been traveling alone, I probably wouldn’t have sought out flying over the Nazca Lines. But I knew Zoe was pretty enthusiastic about it, and being a Yes Girl, I nodded along while grinning like an off-her-meds maniac. 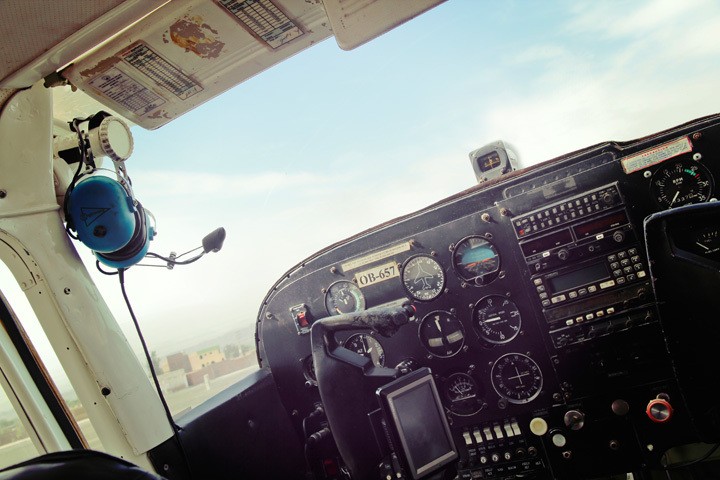 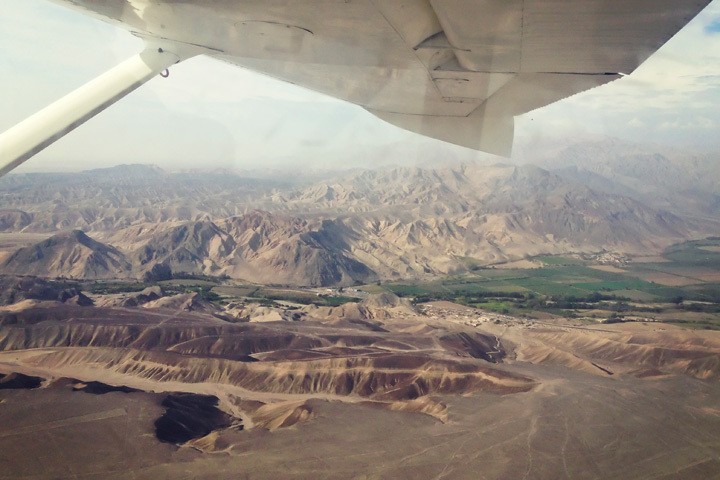 The Nazca Lines are one of Peru’s — and the world’s — great archaeological mysteries. Dotting the desert, the hundreds of individual designs represent spiders, whales, trees, hummingbirds, as well as simple geographical shapes. For centuries, the lines and designs remained hidden thanks to their sheer enormity — it’s not easy to spot an intricate, 96 meter monkey carved into the desert at eye level. They were first spotted in the 1920’s by a pilot flying over the desert between Lima and Arequipa, a discovery that eventually led Maria Reiche, a German mathematician and archeologist, to dedicate her life to the study and preservation of the lines.

To this day, little is known or understood about the lines. Most are about a foot deep and made of a single continuous line, and are preserved by the lack of water (Nazca received about an hour of rain per year) and the abundance of wind (which blows collections of sand and dust away). Their purpose is debated by scholars — some point to astrological inspiration, others to theories of water and irrigation, and most to some sort of religious significance. The overlapping designs point to several generations of creators, most likely between the years 400 and 650 AD. 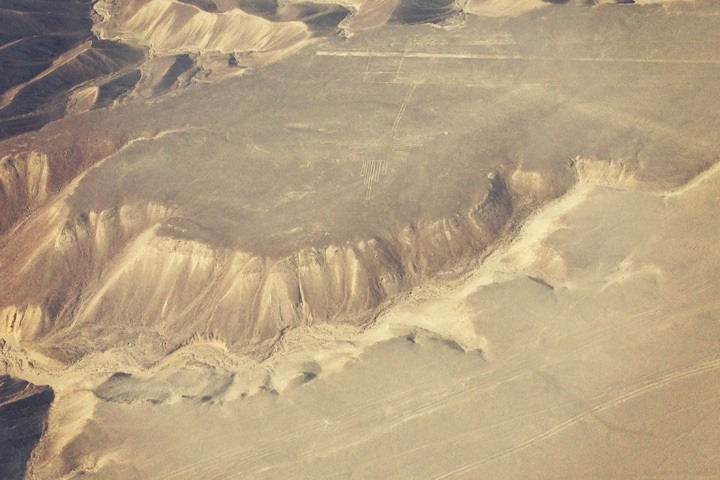 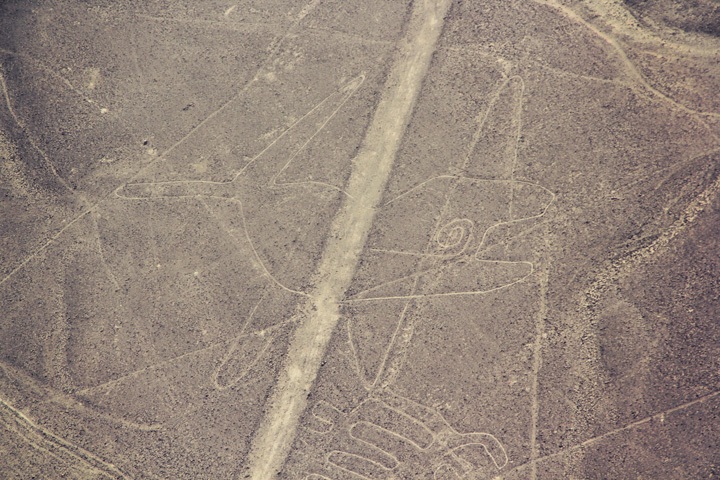 Our hostel in Huacachina offered a package trip to the lines for 280 soles ($100US) that included transportation from Huacachina to Ica, a bus from Ica to Nazca, pickup at the Nazca bus terminal, luggage storage at a local hostel, transport to the Nazca airstrip, the flight itself, and transport back to the local hostel after. We did have to pay a 25 sole ($9US) departure tax once at the airport, but otherwise there were no hidden fees.

Before I knew it, we were hopping into a four seater plane — just Zoe and me in the back, and two pilots up front. The pre-flight briefing consisted entirely of the pilot explicitly pointing out the barf bags.

The co-pilot handed us each a map of the lines we were about to see, though I barely glanced at it as I focused most of my energy on not being in the 60% of people who get sick on the flight — statistic provided by our own pilot. At first, I felt more nerves than nausea, as the flight was extremely bumpy and the world seemed very small below. 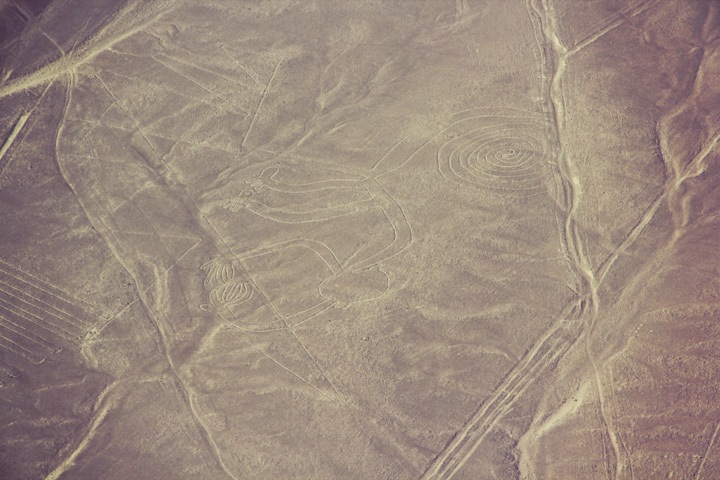 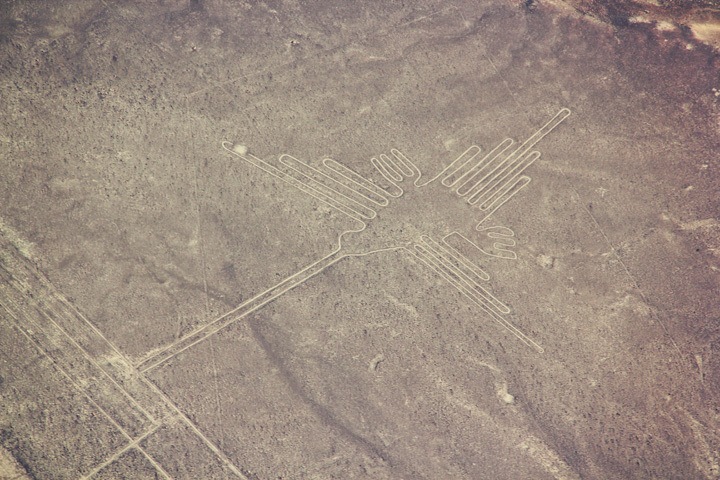 Despite my discomfort, I squealed with excitement when we dipped down towards the first of the many intricate, enormous designs. There is so little known about this phenomenon in the desert, but we do know one thing — we were viewing the lines the way their creators intended, in fact, the only way to view them at all — from the heavens.

For each line the pilots would twist and dip the plane so that both Zoe and I got an equal eyeful — a gesture that our cameras appreciated but our stomaches did not. As those nerves got more comfortable with the bumps and jumps the plane was making, the nausea became less so with the turns. Towards the end of the tour Zoe summed our feelings up quite well when she gave the pilots a “no more” gesture when they started to curve the plane to give her a better view — “Actually, I’m good. Saw it!” 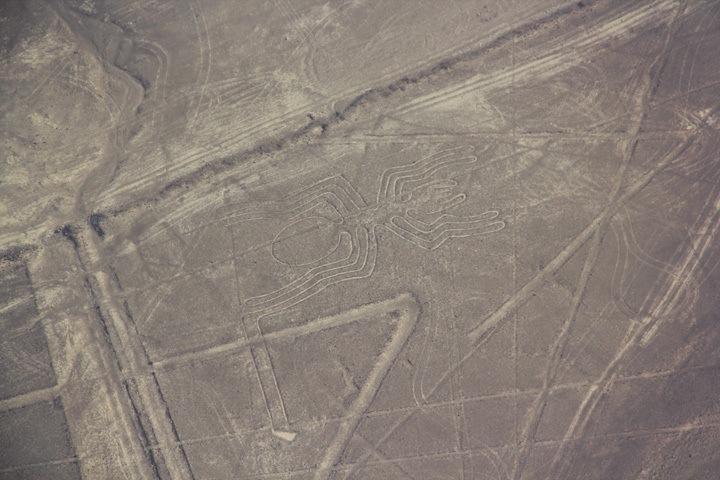 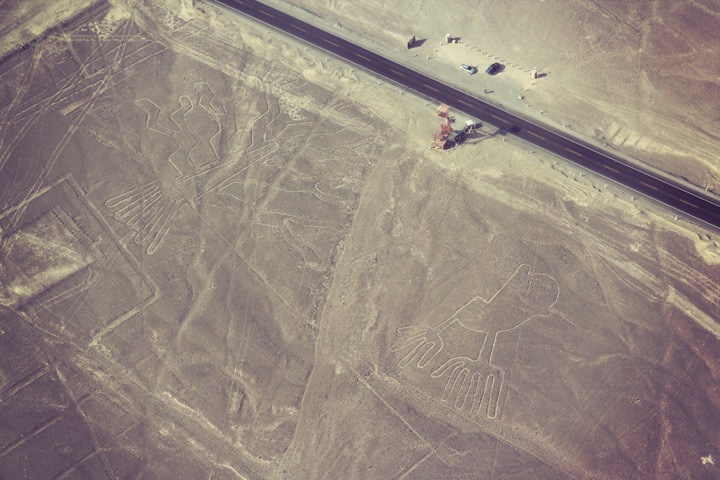 Amazingly, we approached the landing with both barf bags still intact. Having been pretty ambivalent about whether or not we’d make it out of the whole thing alive, I was on a crazy high for the rest of the day. That feeling only heightened when we ran into another guest from our hostel in Huacachina who had been suspicious of the package deal we took and decided to do it on his own. Turns out, he had actually spent more than we did. Budget win!

I made a short film of our flight which is notable both for the “holy crap” face I’m pulling in the beginning and the wink-wink-nudge-nudge choice of soundtrack. Thanks again for the GoPro, Zoe!

After our flight, we returned to downtown Nazca where we soon became grateful that we already had our buses booked to Cusco — it’s pretty much a one hit wonder kind of town. However, we did find that the Nazca Lines Hotel gives nightly hour-long lectures on the lines in French, Spanish, and English for 20 soles ($7US). Considering this was the only local source of information that we could find on the lines — at least in English — we found the presentation and “planetarium show” to be an incredibly valuable supplement to flying over the lines itself, and the perfect distraction before hopping on our overnight bus.

Would I recommend visiting Nazca to those heading to Peru? It depends. If you have a weak stomach or a tight budget, no. If you’re an adrenaline junkie, a history buff, a collector of quirky adventures or an alien conspiracy theorist, absolutely yes. It’s a unique experience that explores a fascinating unsolved mystery — bragging rights included.

Where I stayed: We arrived on a morning bus from Ica and departed that evening on a night bus to Cusco — no accommodation needed.
Where I ate: Nowhere impressive.
How I got there: We took local transit, arranged through our hostel in Huacachina, to Nazca. For the 14 hour bus ride to Cusco, we splurged on VIP Cruz Del Sur bus seats which set us back $63US. It was very comfortable but did not have wifi as promised.
Bonus Tip: Don’t forget to bring your passport to the Nazca airstrip — you’ll need it to board flights over the lines.