What do you think the most visited tourist destination in all of Hawaii is? An exotic luau, a famous surf break, maybe one of the filming sights from Lost? 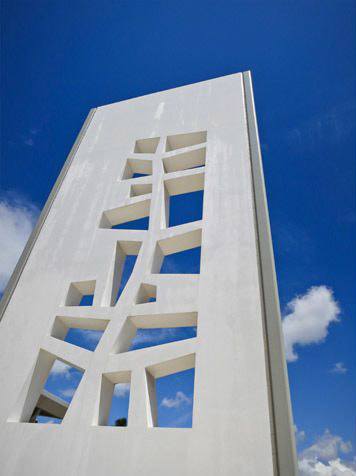 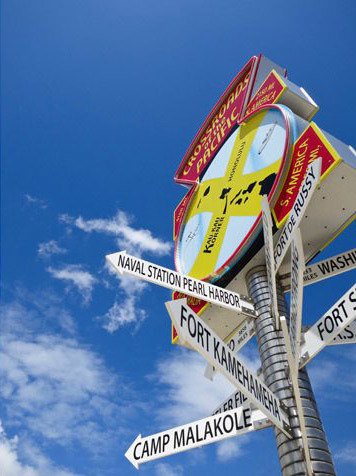 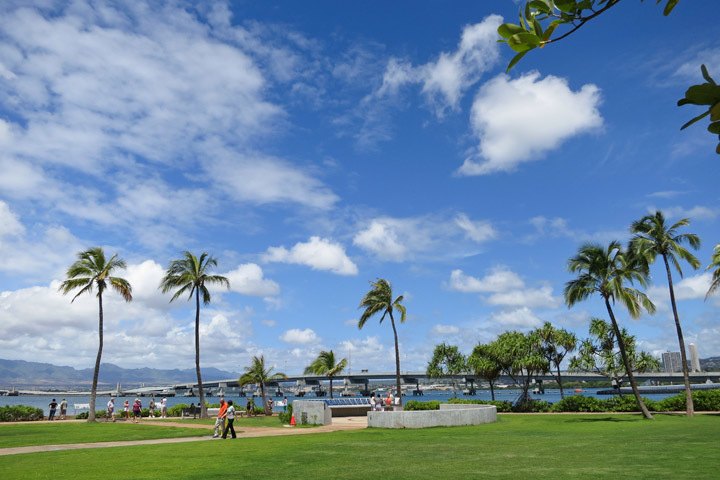 Just a few short miles west of Honolulu, Pearl Harbor is home to America’s naval base in Hawaii. But that’s not why it’s a household name today — that would be due to the fateful day in December of 1941, when an unexpected attack by Japan catapulted America into World War II. In just two hours, over 2,500 were dead, 188 American aircrafts were destroyed, and 7 vessels were sunk or damaged beyond repair. The most famous ship, The USS Arizona, still sits sunk in the harbor and is subject of a famous memorial.

Visiting Pearl Harbor and the USS Arizona is free, however you need to get a timed entry ticket to the USS Arizona memorial. Surprisingly, considering how modern the site it, tickets cannot be reserved online and are available only in person on a first-come, first-serve basis. Arriving at 10am we had a two hour wait to visit the memorial despite the fact that I visited in low season. Luckily there are two free mini museums that kept us occupied right up until our ticket time. 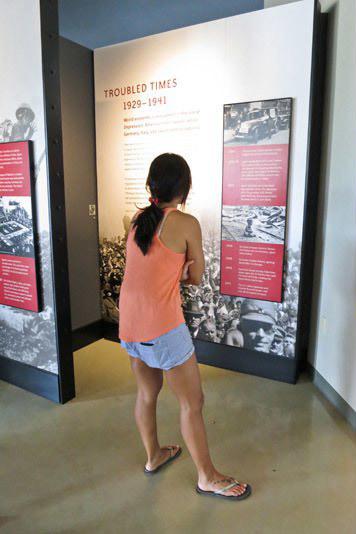 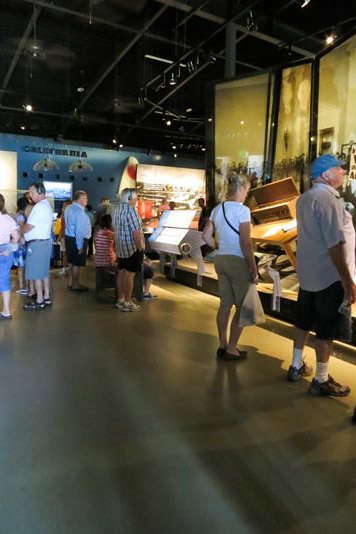 As usual when I do anything that involves world history, I felt embarrassingly ignorant and wondered if I somehow managed to sleep through the relevant chapters in high school. I think in reality I just don’t absorb something very well until I’m standing in the very place in happened — I’ve experienced this in my travels while learning about the Vietnam War and the atrocities of the Cambodian genocide.

Standing in those little museums I felt like I was learning about Pearl Harbor for the first time, about the ambush that caught so many young soldiers by total surprise, about the horrific human rights violations that ensued, and about the swift revenge that brought the country to the front lines of one of the world’s bloodiest wars. 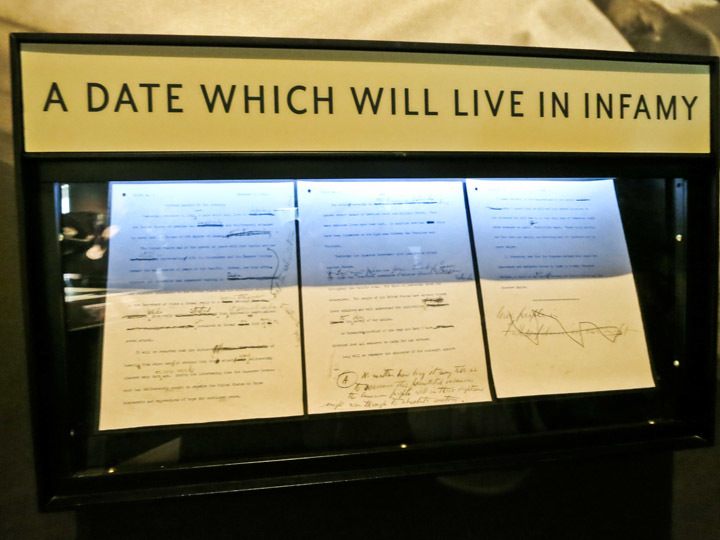 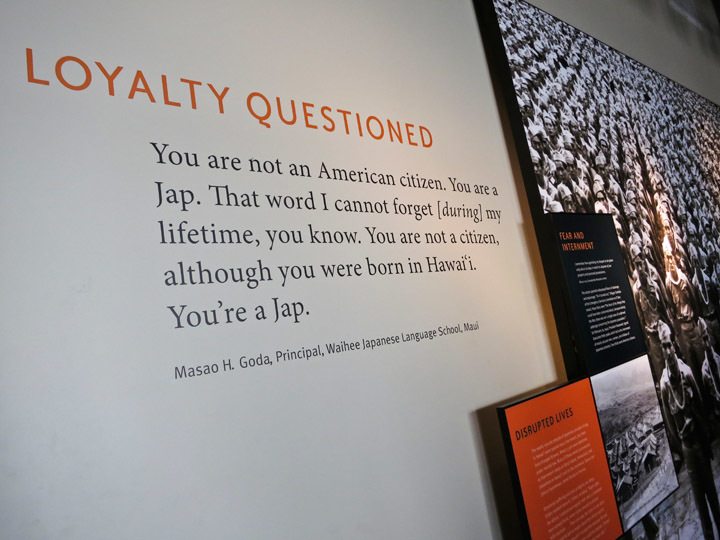 My first surprise was learning how completely unexpected the attack was and how totally unprepared the naval base was for it. As the Honolulu Star reported on September 4th of 1941, “A Japaneses attack on Hawaii is regarded as the most unlikely thing in the world.” The government simply did not view Japan as a threat to the United States. And while Japan certainly succeeded in their goals on that day, in the long run the retribution led to war that defeated the empire.

One can search military history in vain for an operation more fateful to the aggressor. — Samuel Eliot Morison 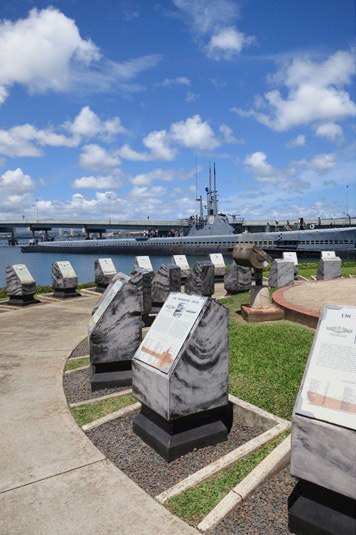 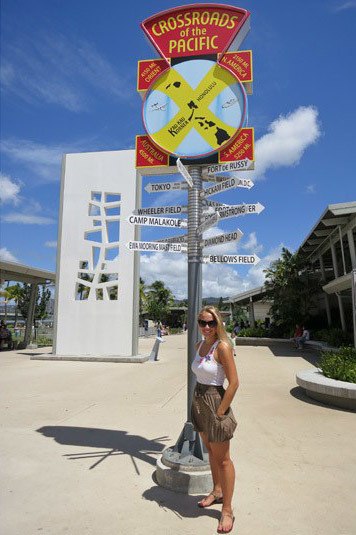 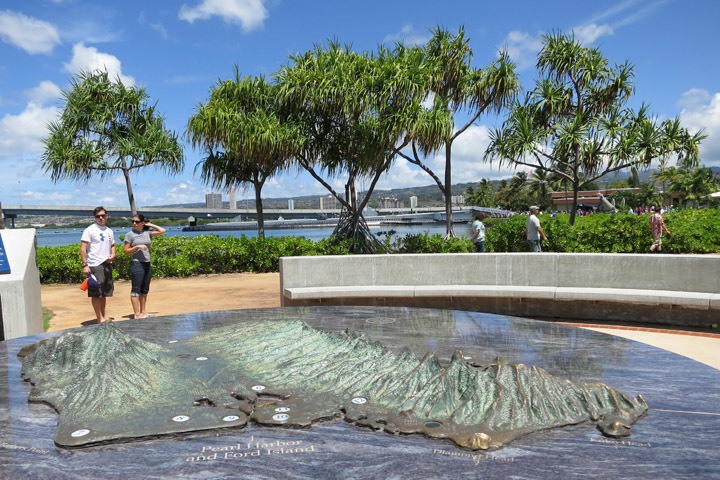 While the USS Arizona memorial is dedicated to the Americans who died on that day, the atrocity that stuck with me long after I left Pearl Harbor was the country’s resulting internment of its own citizens. In the wake of the Pearl Harbor attacks, nearly 120,000 Japanese American men, women and children were confined in what were called “War Relocation Camps.” Sixty percent of them were American citizens, and not a single one was case of sabotage was ever proved among them. It turns my stomach to think that my country let hysteria and paranoia run so deep that we imprisoned our own citizens based on nothing more than racial prejudice.

Hawaii can at least be proud of its resistance to internment. Considering it is where the attacks took place, Hawaii interned about 1% of its Japanese American population, compared to the West Coast where the percentage was closer to 100%. You can learn more about Japanese American internment here.

I remember how agonizing my despair to be given only about six days in which to dispose of our property and personal possessions. — Mitsuo Usui, Granada War Relocation Camp 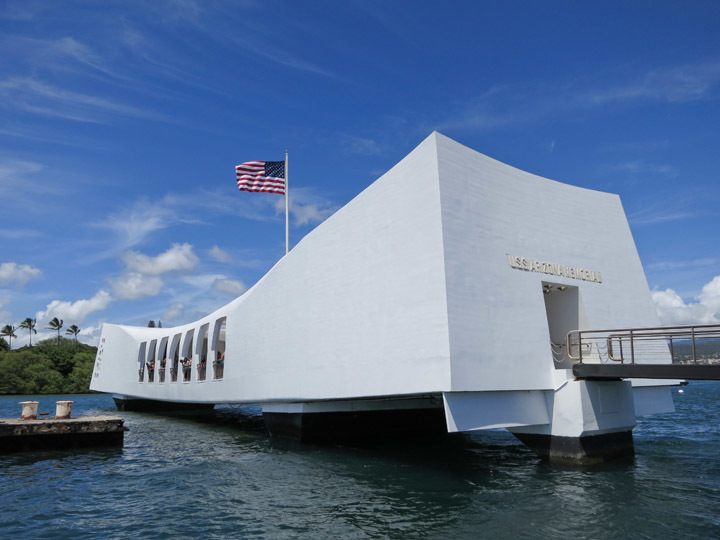 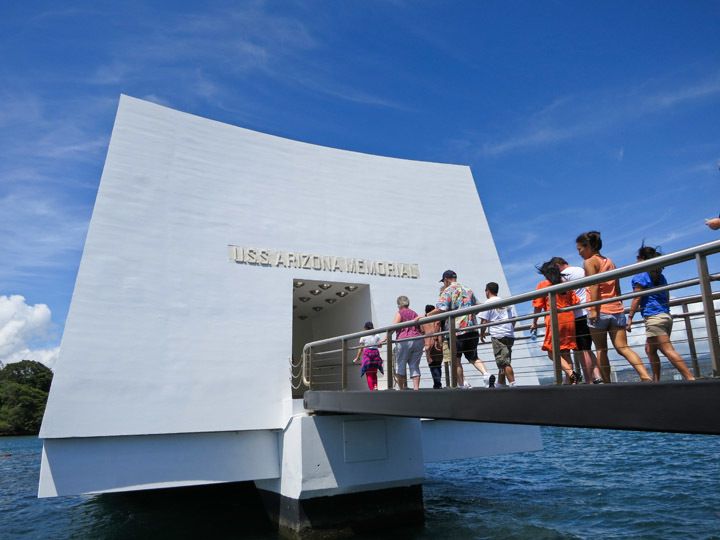 As our ticketed time arrived and a boat took us out to the USS Arizona Memorial, I reflected on the final shock: that in just two short hours, acts were set in motion that ignited the United States to formally enter World War II, the deadliest conflict in all of human history.

Interestingly, the memorial was designed by Alfred Preis, an architect who himself was briefly detained into a War Relocation Camp after the Pearl Harbor attacks. From a design standpoint I was deeply impressed by the memorial, the sagging form of which is symbolic of the country’s psyche throughout the war. One peak represents the height of American pride prior to the war, the low slope is symbolic of the low morale after the attacks and then finally the other peak shows the rise of American power after the war’s victory. 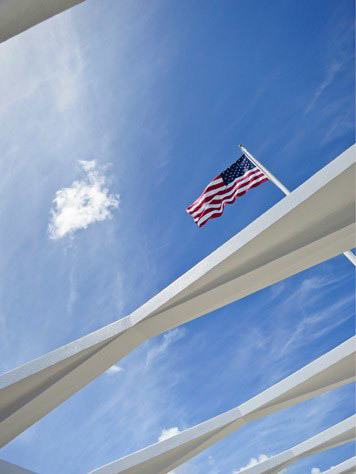 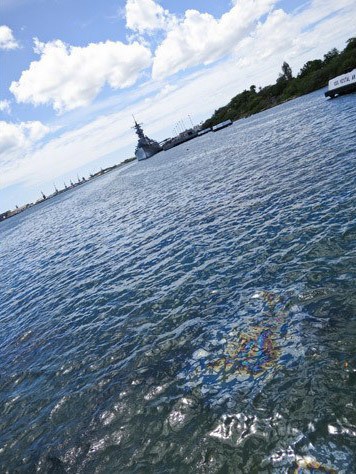 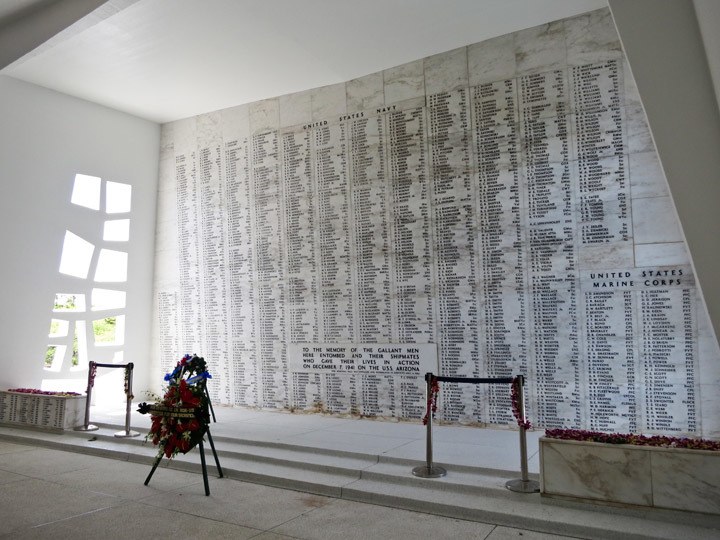 Accessible only by boat, the memorial straddles the sunken USS Arizona, the watery grave of 1,102 of the 1,177 sailors killed on the battleship that day. The monument sees a constant influx of people with more than one million visitors coming to pay their respects annually. 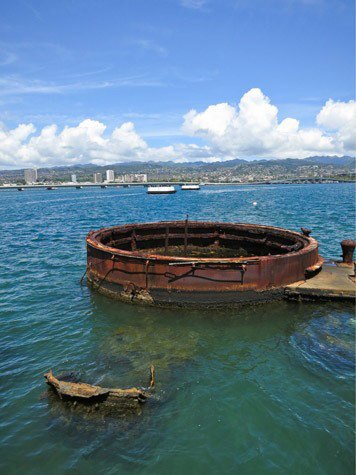 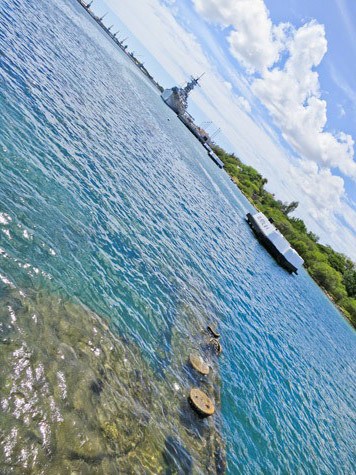 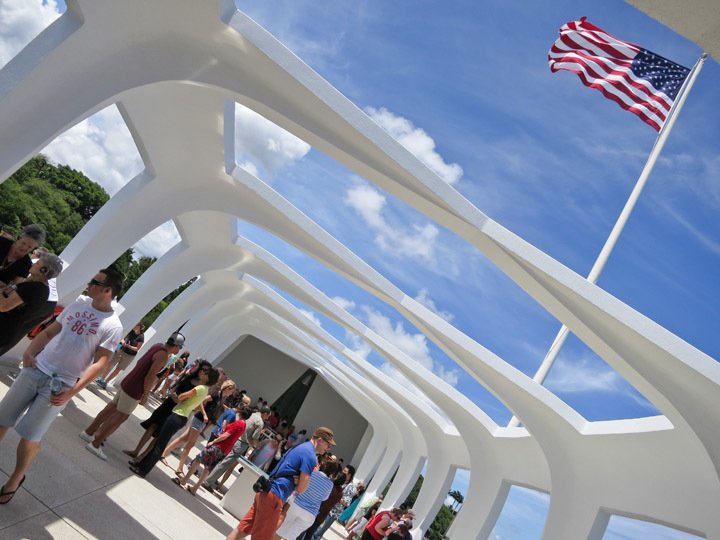 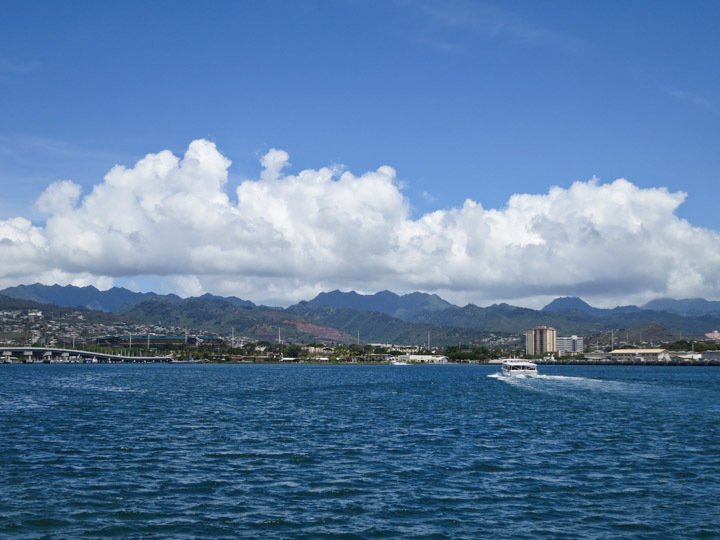 I’m so glad I took the time to visit Pearl Harbor while I was in Oahu. I learned so much about a significant day in American and World history, and I visited a beautifully designed memorial that paid tribute to the lives that were lost in those fateful December hours. As always, I only hope we can remember the mistakes of the past and learn from them as we move forward.

If you are planning a visit to Pearl Harbor, Amanda from A Dangerous Business has put together a great guide to the surrounding attractions. 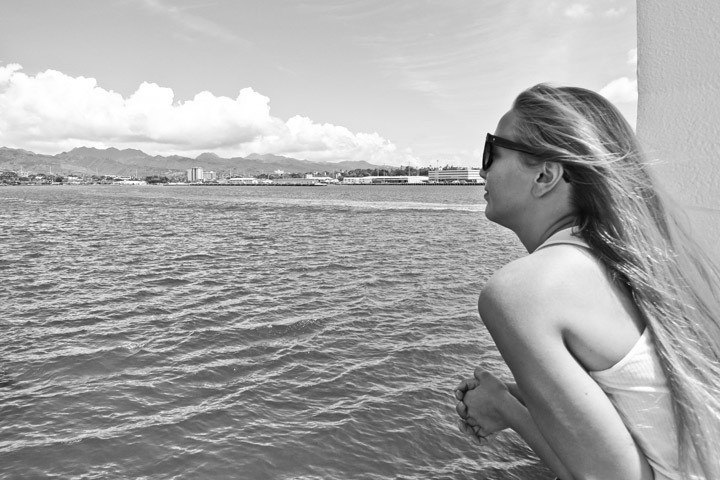 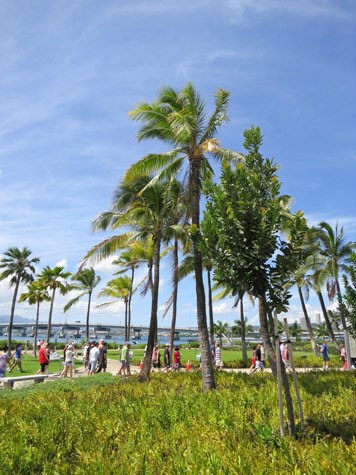 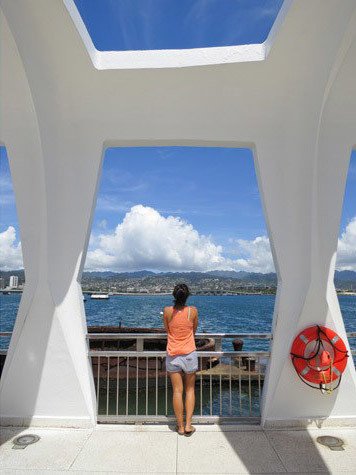 Have you been to Pearl Harbor? Did you find the memorial as beautiful and moving as I did?