Hopkins was a salty playground. San Ignacio was a lush retreat. We certainly could have done Belize justice had our trip ended as we pulled away from the Ka’ana Resort. But we had one more region of this tiny Central American paradise to cover — the Cayes.

As teachers, my cousin and sister had over a week off for spring beak, and so we decided to tack one last destination onto our trip. We hemmed and hawed and eventually settled on Caye Caulker, a teeny tiny isle off the coast of Belize City known for being a backpacker’s paradise. We also briefly considered Ambergris Caye, Caulker’s larger, more developed, and more upscale older sister, but decided barefoot was more our speed.

With mama headed back stateside, this portion of the trip was just us kids. You know, assuming you consider three independent women in their twenties and thirties to be considered kids! Which we totally do. Hence our cackles of glee as we poked each other without fear of tattle-tailing. No more chaperones! Teachers gone untamed! Come on vacation, leave on probation! (Just kidding mom. We cried every day after you left.) 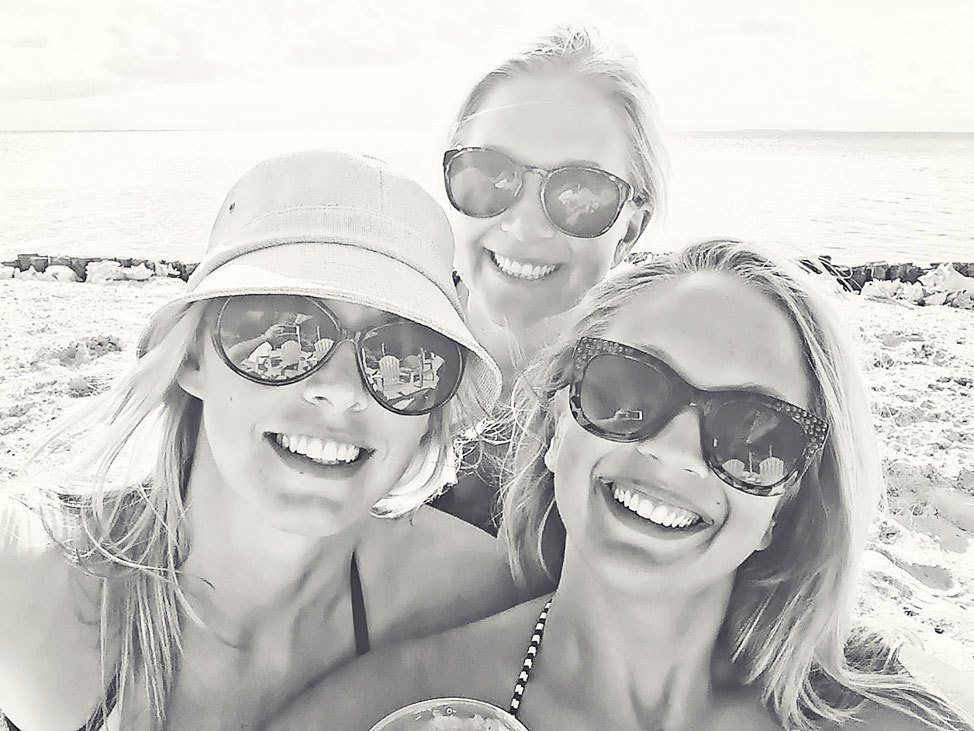 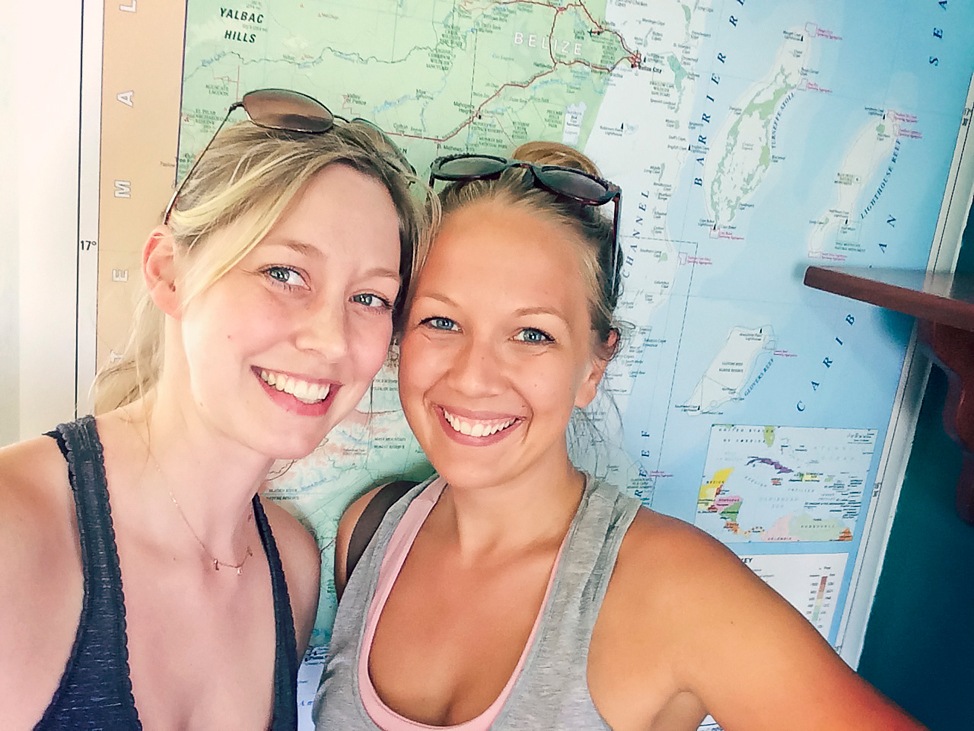 Under most circumstances, we probably would have just taken a boat over to Caye Caulker. But as we were dropping my mom off at the airport anyway, we decided to just hop a quick, fifteen minute Maya Island Air flight instead. The whole experience was hilarious, from the strict “no lobsters through the x-ray” sign at the gate to the security guard who chastised my sister for having liquid bug spray in her carry-on, but let her keep it anyway because, “[she’s] gonna need it.”

We’d barely started selfie-ing in the plane when we touched down at the hustling, bustling Caye Caulker Airport, which I think anyone would agree rivals LAX and JFK in terms of the traffic situation. 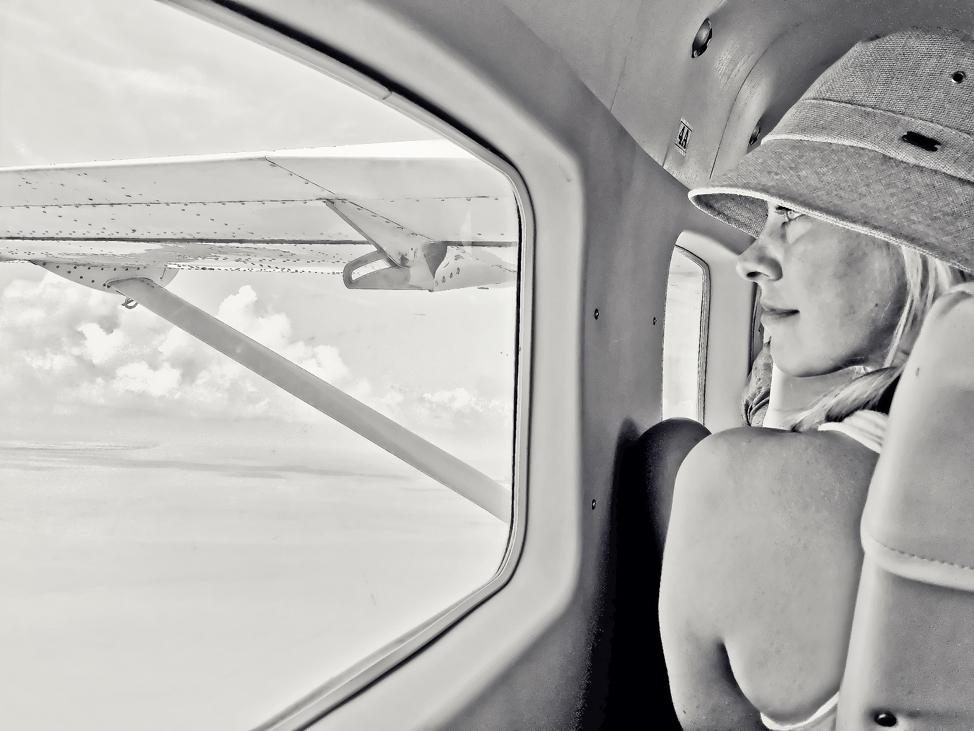 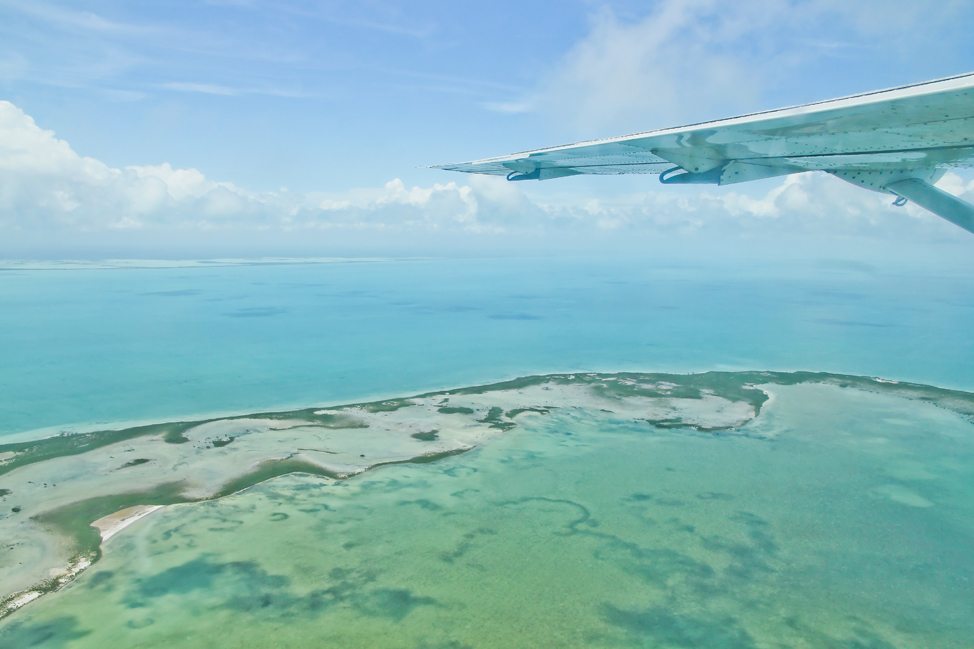 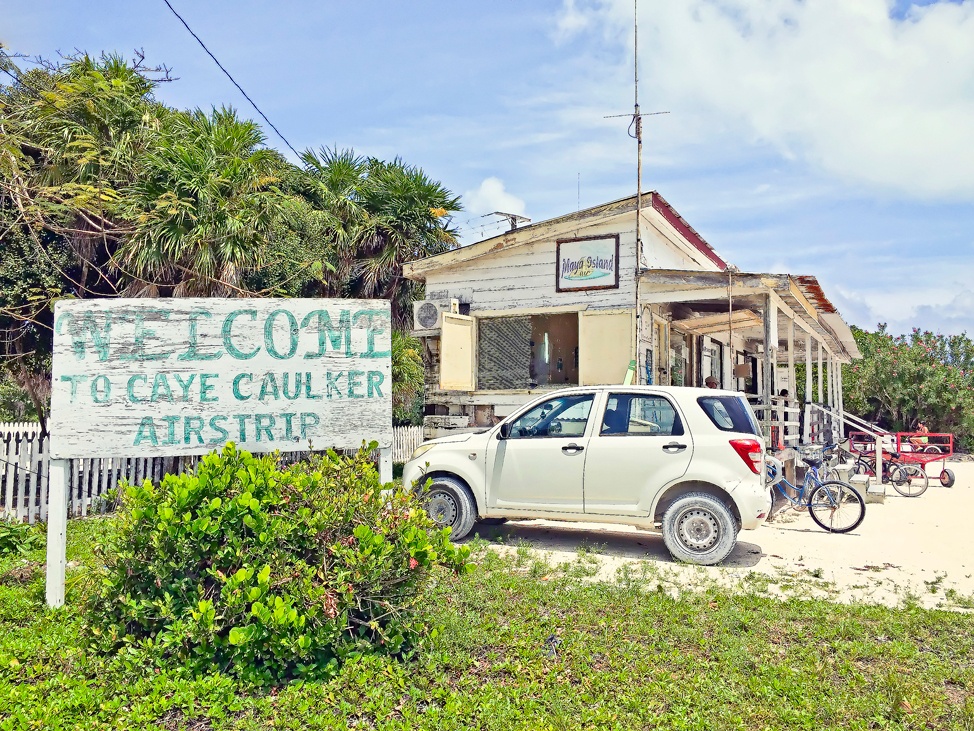 Thankfully, we didn’t have to fight anyone in the madhouse of a taxi line — our chauffeur was awaiting us with the engine running! 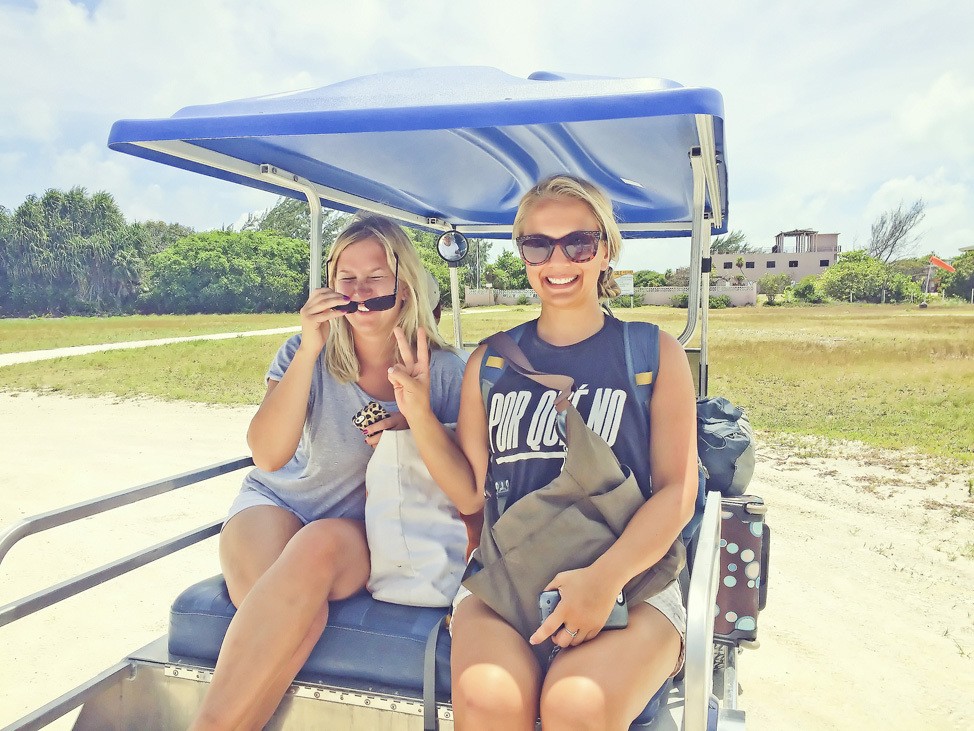 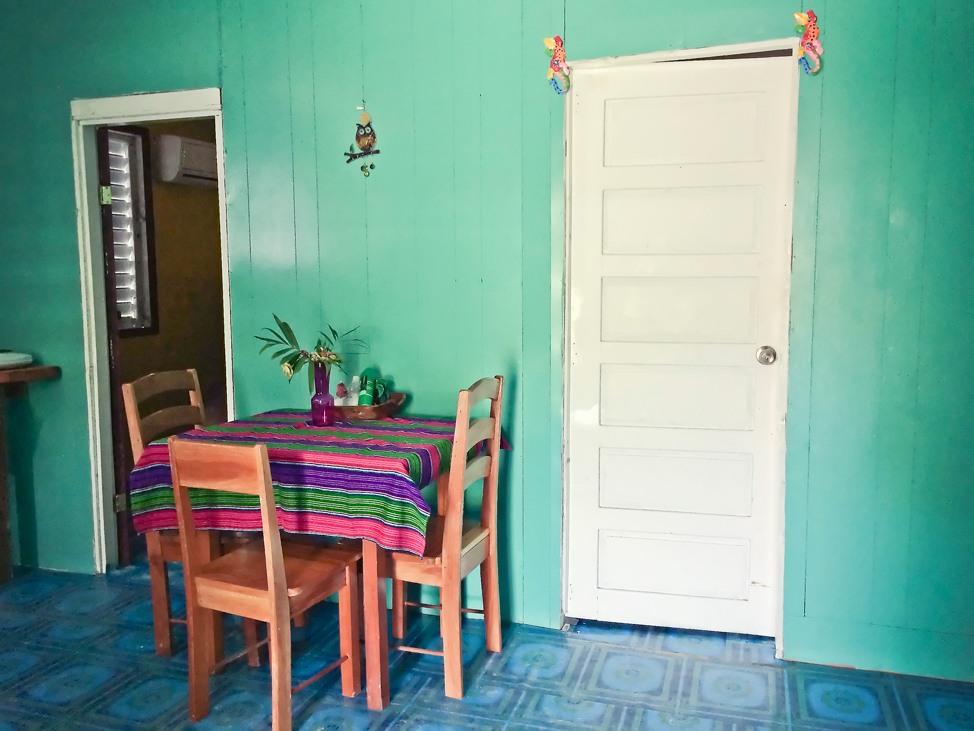 Here’s a tip if you’re planing a trip to Belize that happens to fall over Easter: Don’t. Just kidding, do, but maybe start looking for accommodation yesterday. We’d kind of vaguely planned to wing it for our last few days until a friend more clued into the Belizean national vacation habits laughed in my face and told me we’d be lucky to find a hammock to sleep in over that weekend on Caye Caulker. She was almost right — by the time I started looking, six weeks before our arrival, there were three places still available that were bookable online, and one sold out while I was in the checkout process. Other places with only phone numbers confirmed that they too had no vacancy. Thankfully, my Airbnb request went through and we found ourselves the proud temporary residents of a cute little two bedroom apartment for the weekend. This was my first time using Airbnb — previously I’ve always rented via Flipkey and I saved $25 by using a friend’s referral link. You can do with your own bookings by using mine — click here!

The rental wouldn’t end up being without drama, but that’s a story for another time. This post is about the rainbow-sprinkle colored sweetness that is Caye Caulker. I love Central American Caribbean islands, from Bocas del Toro to the Bay Islands, and now to the Belizean Cayes. There is something sublime about their blend of beauty and culture and affordability. 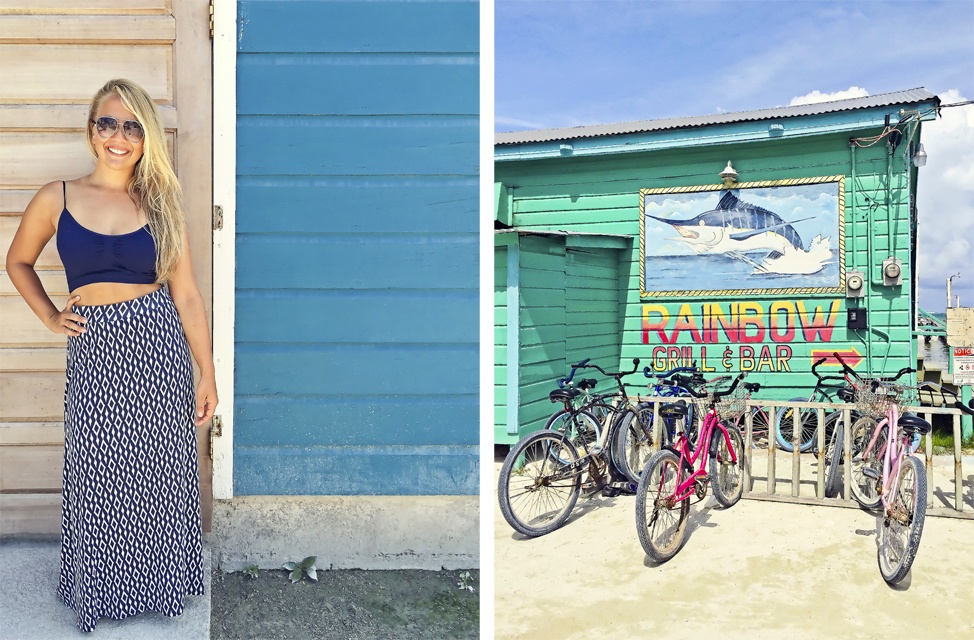 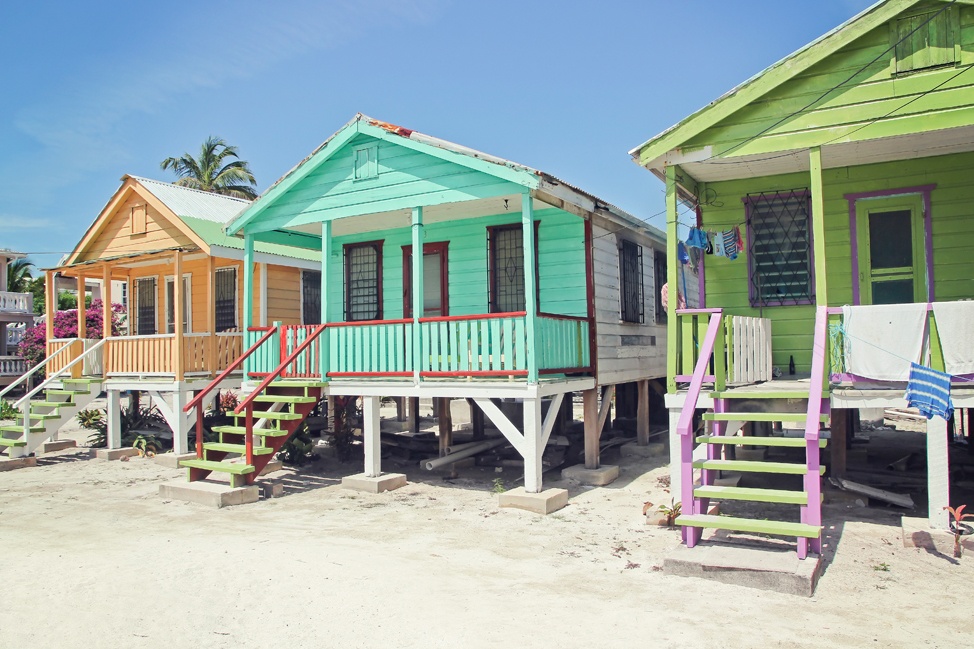 We spent three nights on Caye Caulker; the first was Good Friday and the last was Easter Sunday. Five miles long and less than five miles wide, it doesn’t take much to make an island this size feel crowded. The laid-back, chilled-out Caye Caulker I’d heard other backpackers describe was turned up for the weekend. While no alcohol is sold anywhere in Belize on Good Friday, they certainly make up for it the rest of the weekend.

Reggaeteon and soca music blasted from speakers bigger than the bedrooms in our rental apartment. Energetic people buzzed down Front Street. The dock at The Split, beachless Caye Caulker’s answer to a stretch of sand, was covered inch for inch with towels and sarongs of sunbathers. Within an hour of arrival, three different people warned us to get money from the ATMs, as surely they’d be empty by the next morning. Caye Caulker was sold out.

I’m sure to some this would be a nightmare — our yoga teacher all but personally apologized for the “chaos” — but after a week at ultra-relaxing luxury resorts, we enjoyed the lively atmosphere and were bemused by all the antics. Plus, it was still possible to slip away to quiet side streets. 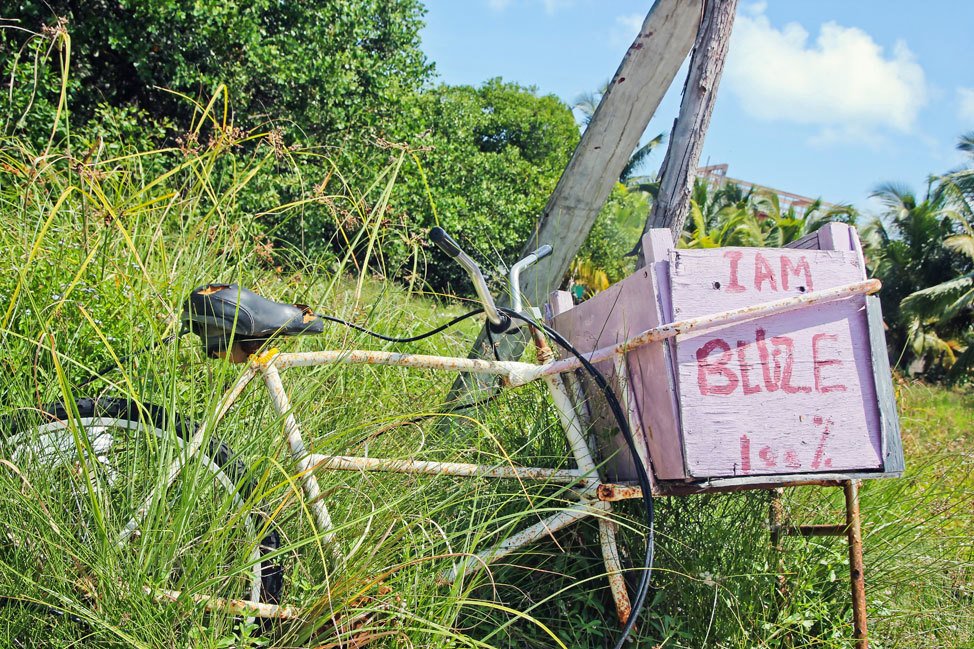 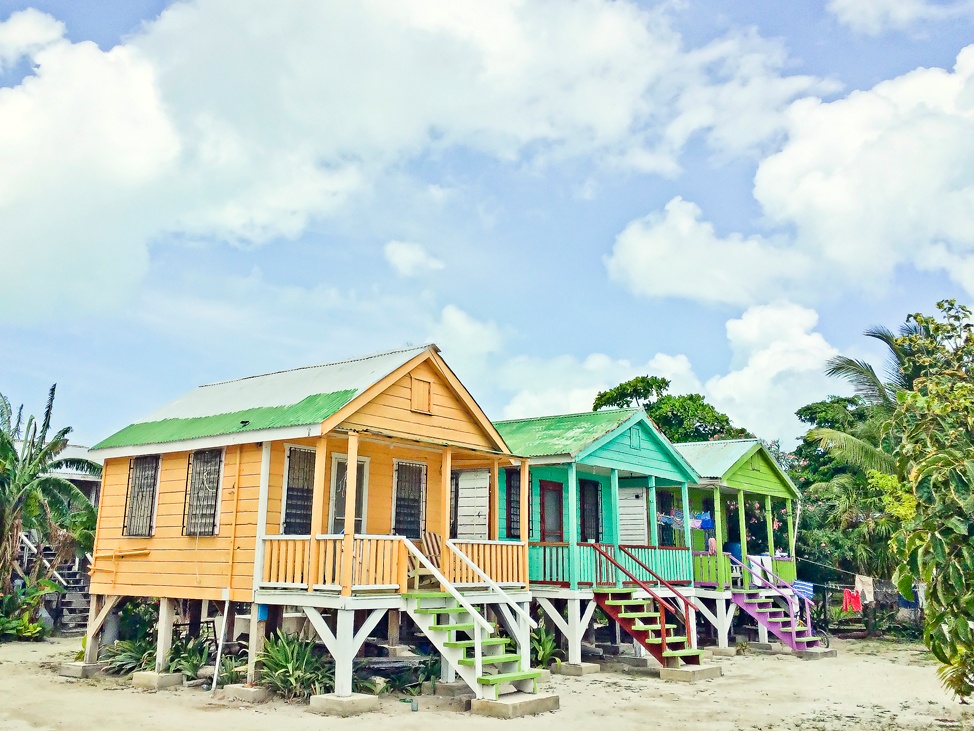 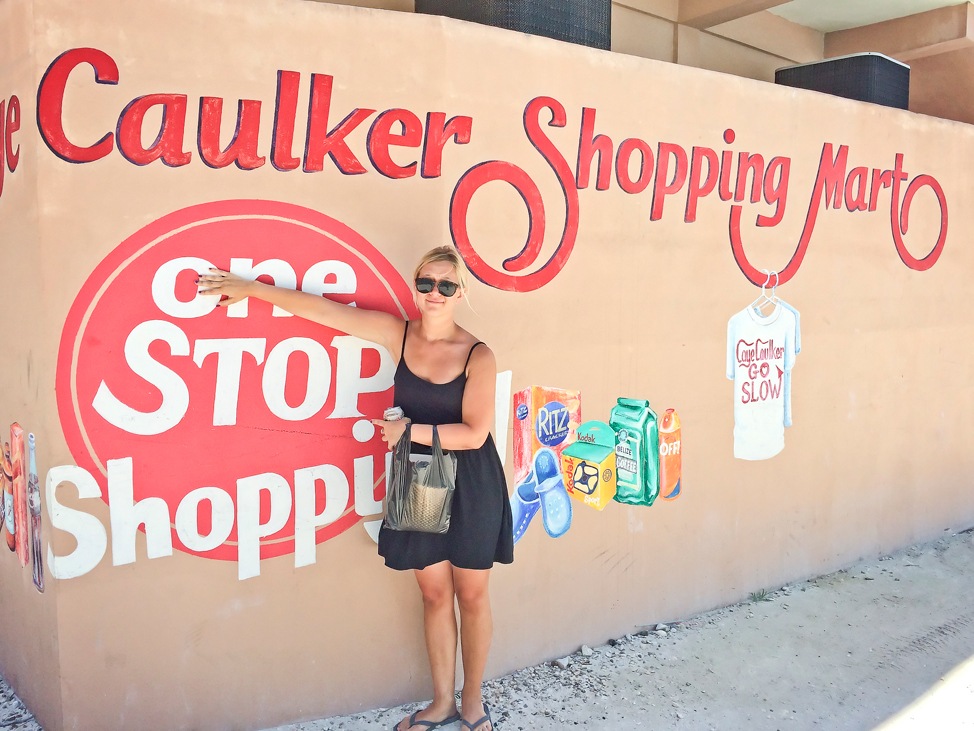 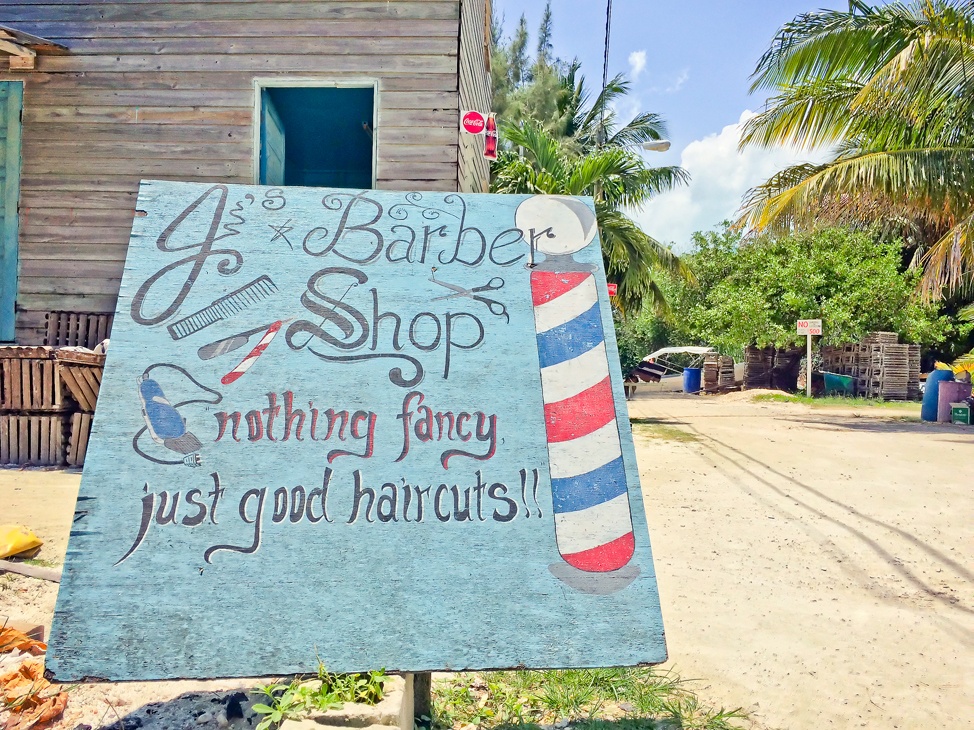 That said, we didn’t necessarily participate in those antics. We did have one fun night out but it started with a sunset booze cruise — more on that later — and so it was more of a sprint than a marathon, if you know what I’m saying. Going to Caye Caulker during Easter and trying to have a typical tourist experience may be like going to New Orleans during Mardi Gras and trying to do the same, but I think we still got a pretty good taste of what this little island is all about. Color. Community. Sunshine. Sunsets. Swinging over the sea. Jumping into the sea. Going slow.

“Go slow” is the official motto of Caye Caulker. Things were going pretty fast while we were there, but it’s still an island where bicycles replace mopeds. Golf carts supersede cars. Guesthouses reign over resorts. Roads aren’t paved, feet aren’t constrained to shoes, and “watching the sunset” is considered a respectable goal for the day’s accomplishments. 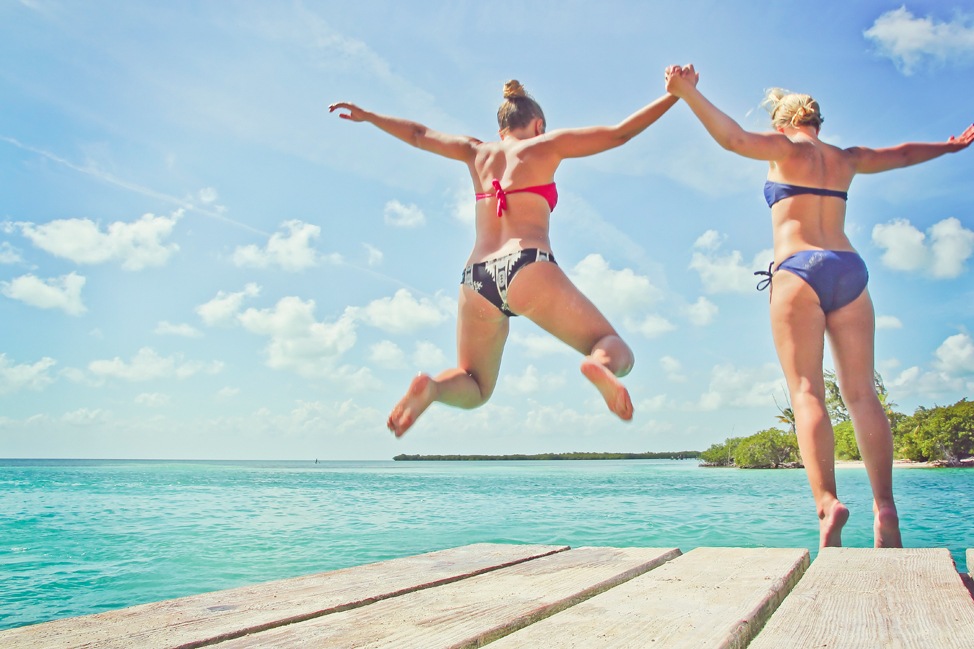 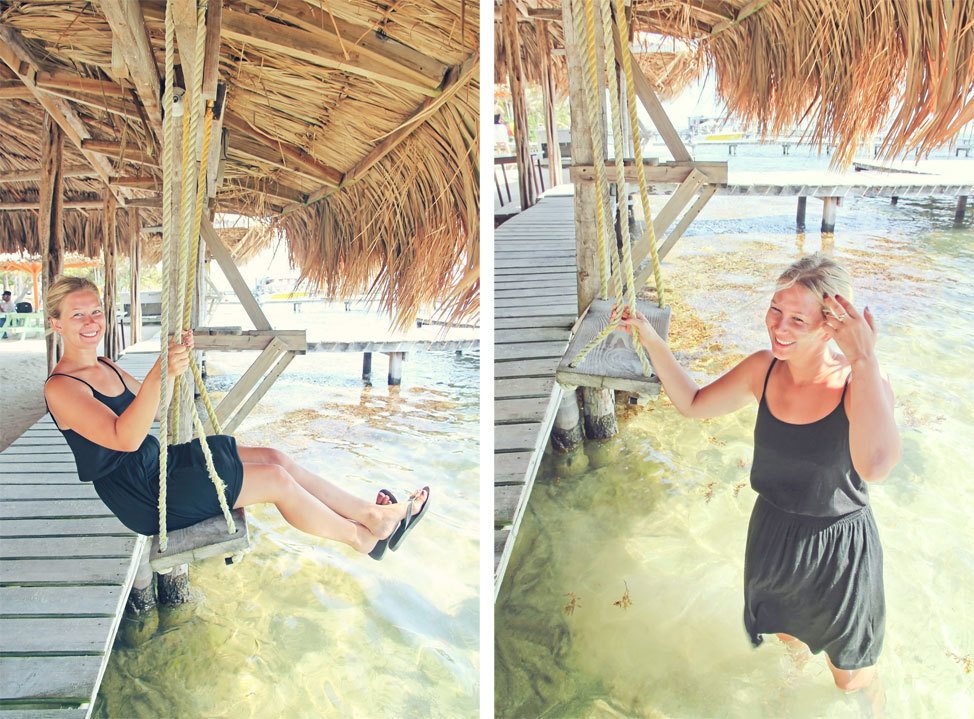 Go slow? I wish time could have gone glacial. Then I wouldn’t have had to leave. 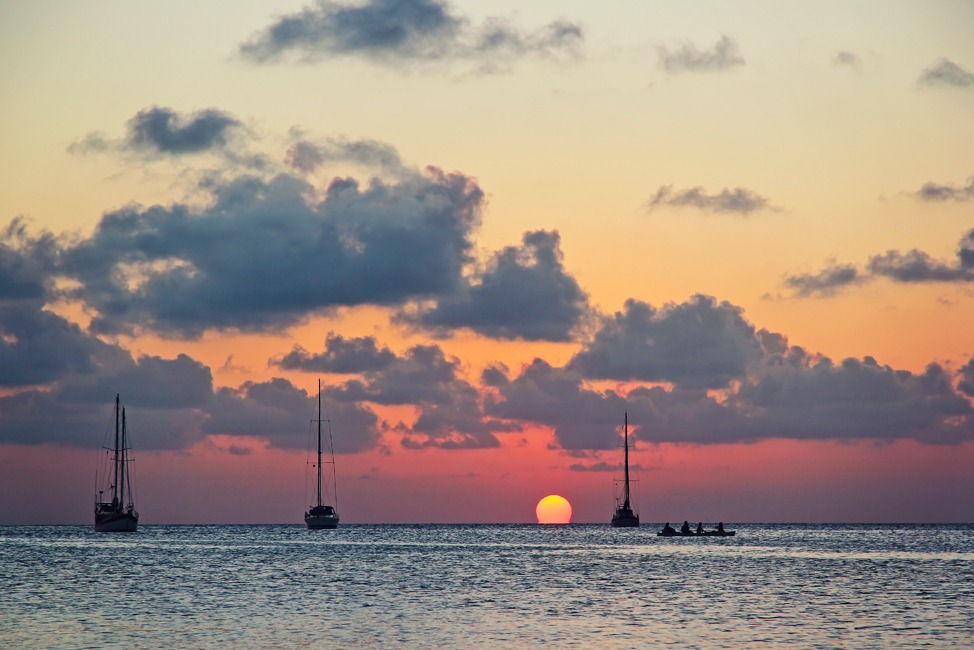 Many thanks to Maya Island Air for providing me with complimentary flights within Belize.  Get $25 off your first Airbnb booking by clicking here.

You Better Belize It: Happiness in Hopkins Bay

Don’t Stop Belizing : Xunantunich by Horseback and Half Lotus

Don’t Stop Belizing : Xunantunich by Horseback and Half Lotus Photo of the Week 215: New York
53 Comments...