The Sights of Reykjavik

People come to Reykjavik more to do than to see. Iceland is one of the adventure travel capitals of the world, after all! So it should come as no surprise that most of our four days in the capital were actually spent traveling outside it on excursions going diving, horseback riding, and biking. However, Reykjavik charmed me completely it its own right and is brimming with interesting little museums, art galleries, and other sights. We managed to sneak in a few throughout our busy Iceland schedule.

One of the most recognizable buildings in Iceland (and featured in my Iceland video!) is the relatively young Lutheran church of Hallgrímskirkja — completed in just 1974. The tall structure, visible from more than 12 miles away, is a favorite amongst tourists for the view provided from the observation tower. While it’s free to enter the church, the elevator ride to the tower is 400 kroner ($2), a modest fee compared to other attractions in Iceland. 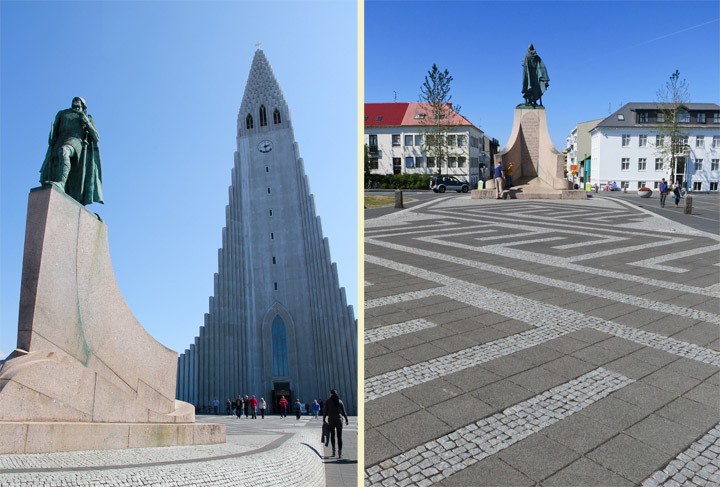 In front of the church is a statue of Viking Leif Eriksson, a tribute to the first European to run into North America and a small taste of Iceland’s obsession with its viking past. 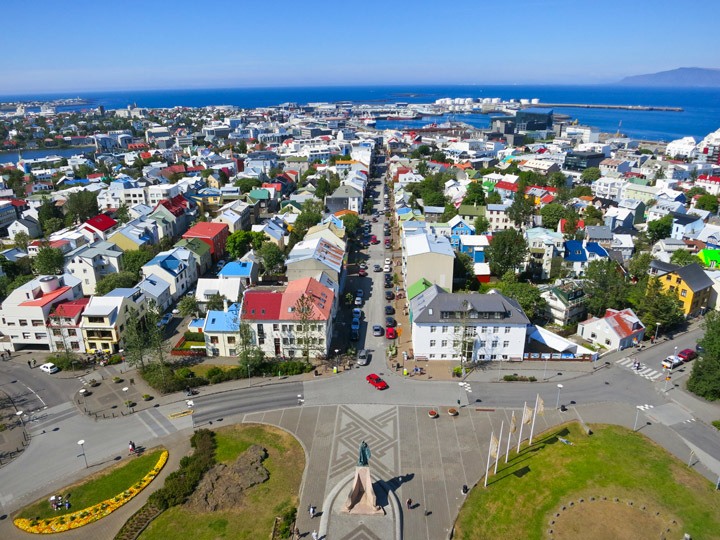 While I admit the views from the tower over the candy-colored and orderly roofs of Reykjavik were fantastic, the church structure itself wasn’t really my style. Apparently I’m not the only one, because controversy haunted architect Guðjón Samúelsson, who never lived to see the end of the buildings 34 year construction. 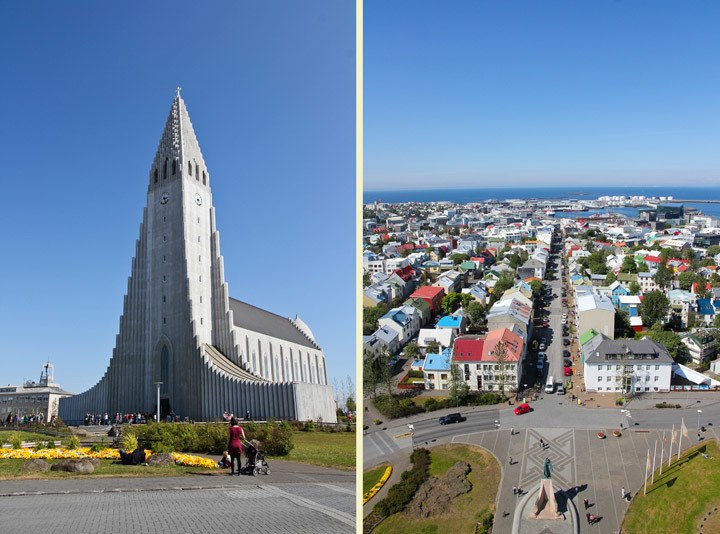 Because there was a wedding going on that day, we weren’t able to see the church’s reputedly spartan interior. The real highlights are the views and the exterior anyway, so when you add in the bonus of a bride sighting I wasn’t upset in the slightest. 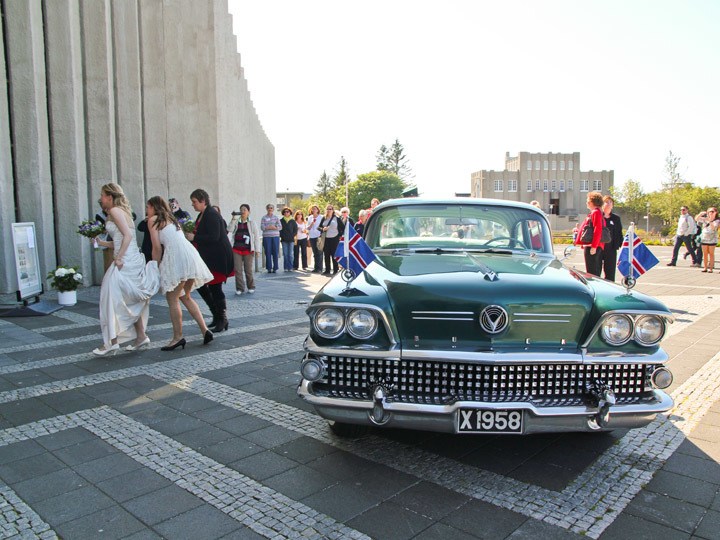 Turns out Hallgrímskirkja was a hotbed of activity that day — we also stumbled upon an exciting protest! From what we could gather, the chanting crowd was trying to stop victim-blaming in Icelandic court cases about rape. Cheers to a passionate and politically involved population! 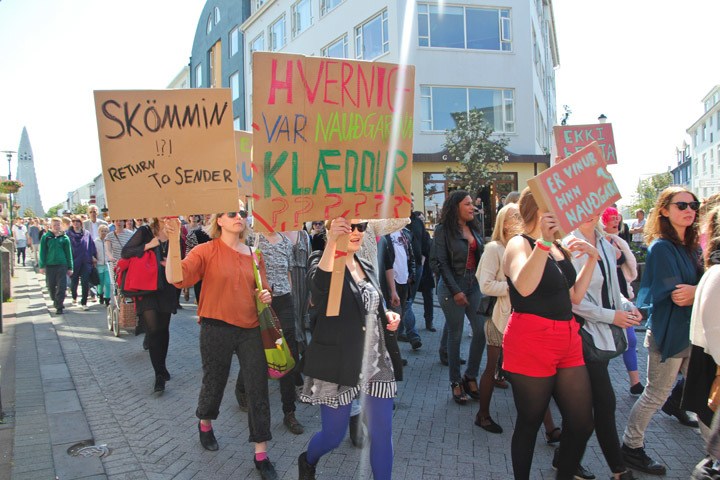 Another one of Iceland’s quirky and iconic buildings is Harpa, the country’s performing arts and conference center. This building is even newer than Hallgrímskirkja, having officially opened only in August of 2011. 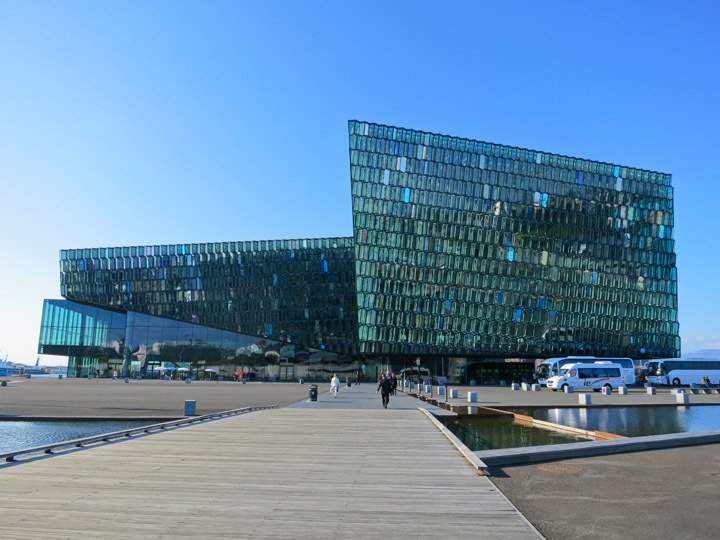 Harpa is situated on the harbor, and when you look at the right angle the glass panels appear to be covered in glitter, the way they reflect the water below. Different colors are reflected by the panels depending on the time of day, season and weather. 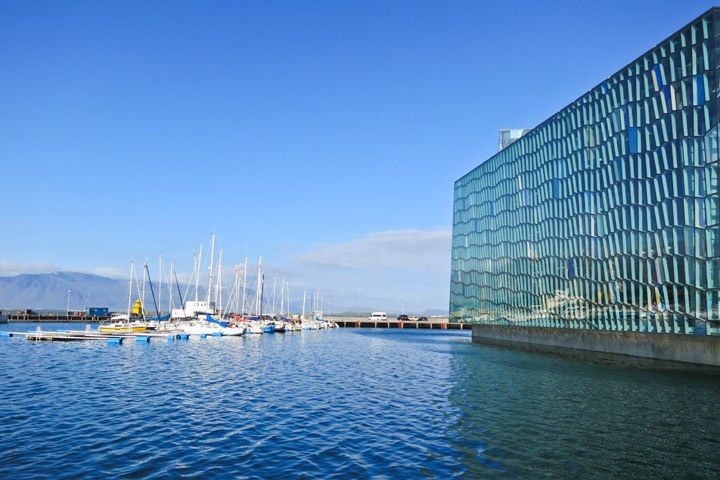 We returned to Harpa multiple times while we were in Reykjavik and I simply could not get enough of it. Some have criticized Harpa for being a bit audacious — it cost $150 million to build in a time when Iceland was going through one of Europe’s most shocking financial disasters, and has four large halls, the largest of which seats 1,800 people in a country of 320,000 people. But standing in awe in front of the structure, I couldn’t help but think the hard work by Icelandic-Danish artist Olafur Eliasson and architects Henning Larsen Architects was worth it. 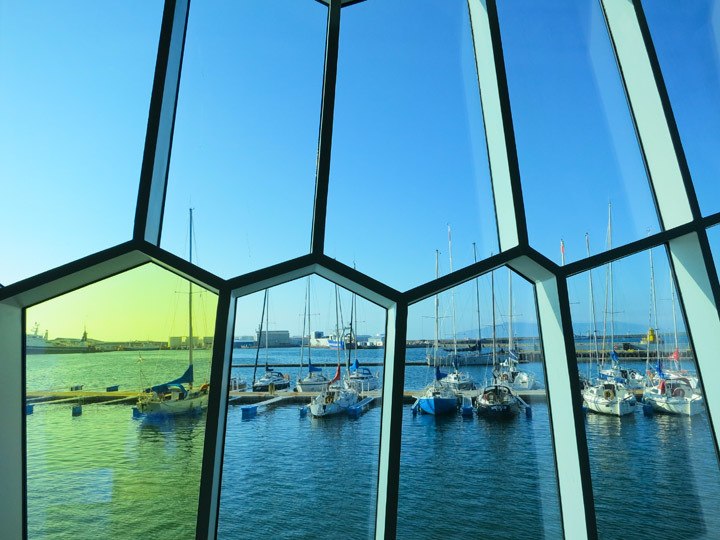 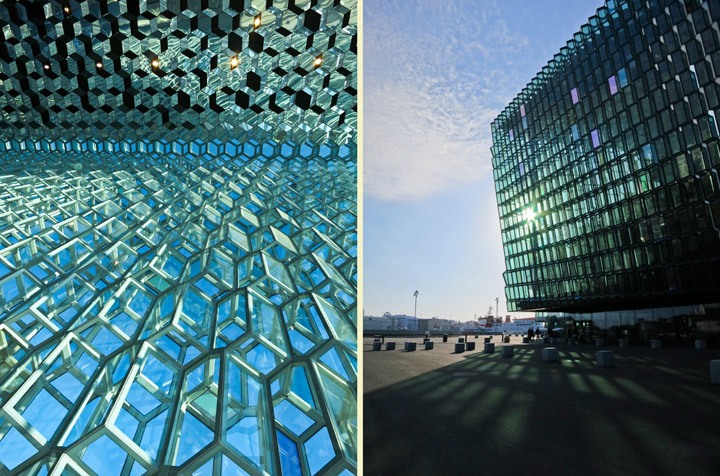 Like Hallgrímskirkja, Harpa is said to be inspired by Iceland’s unique geology. Hallgrímskirkja’s columns are meant to reflect volcanic basalts, while Harpa is supposedly a reference to the country’s volcanic activity. 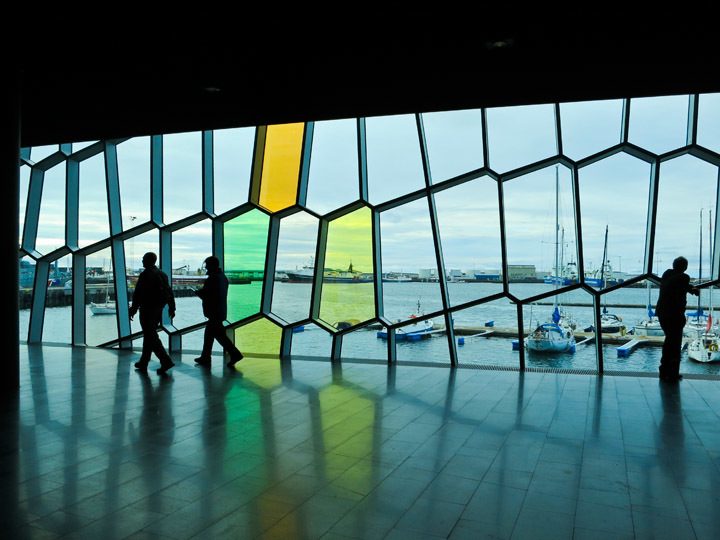 While we weren’t able to see the impressive main theatres (only open during twice daily guided tours), we did get into one of the smaller ones to see a show. How To Become Icelandic in 60 Minutes was a light-hearted one-man comedy show that had some serious belly laughs. At 3,900 kroner ($21), it was a fairly affordable way to get a little bit closer to beautiful Harpa. 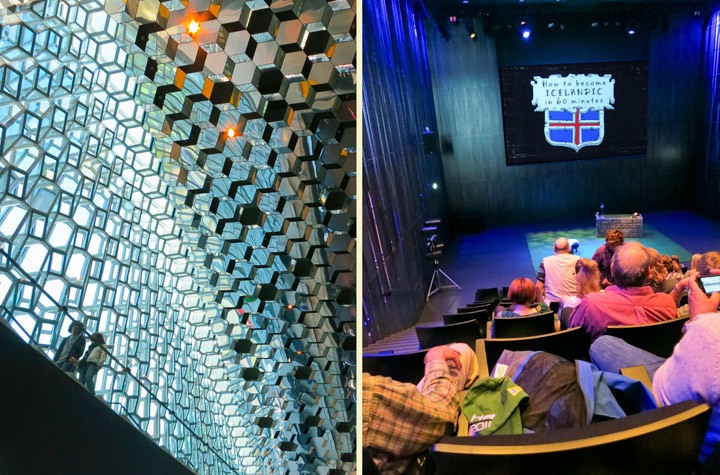 The Sun Voyager, a seemingly unassuming sculpture located along Reykjavik’s riverfront, is one of Iceland’s more iconic images. Something about it seems to capture the hearts and cameras of millions of tourists. 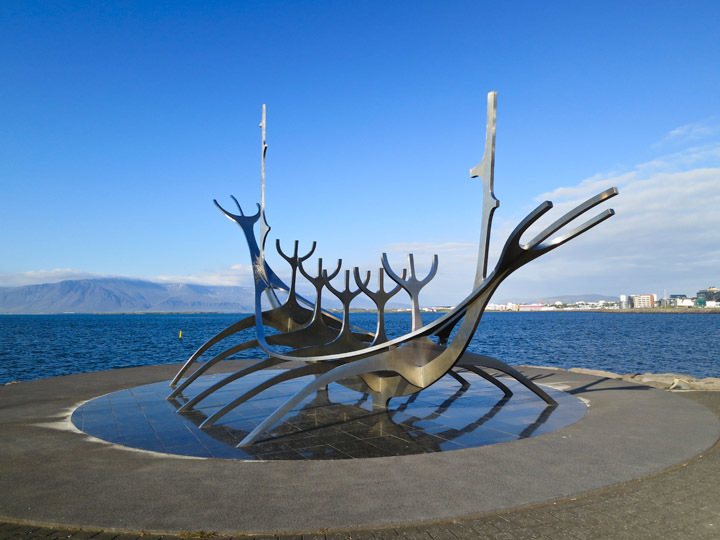 The Sun Voyager (or Sólfar in Icelandic) was completed by artist Jón Gunnar Árnason in 1989. It’s yet another ode to Iceland’s viking history, and facing out to the sea it stirs feelings of adventure and hope. 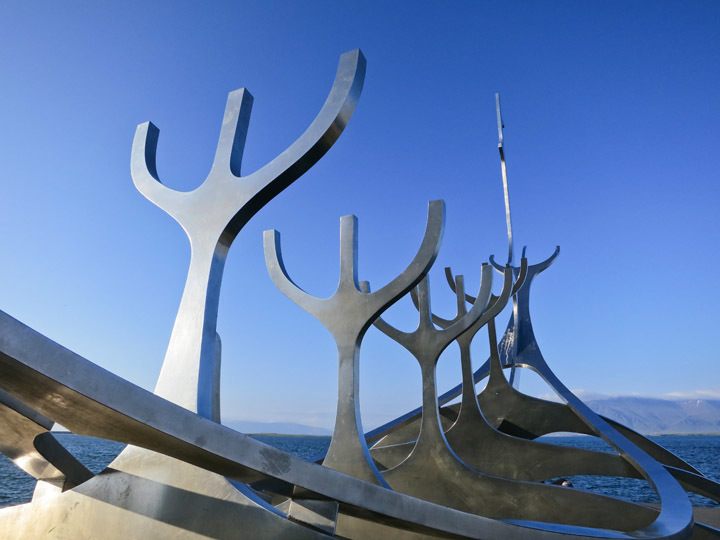 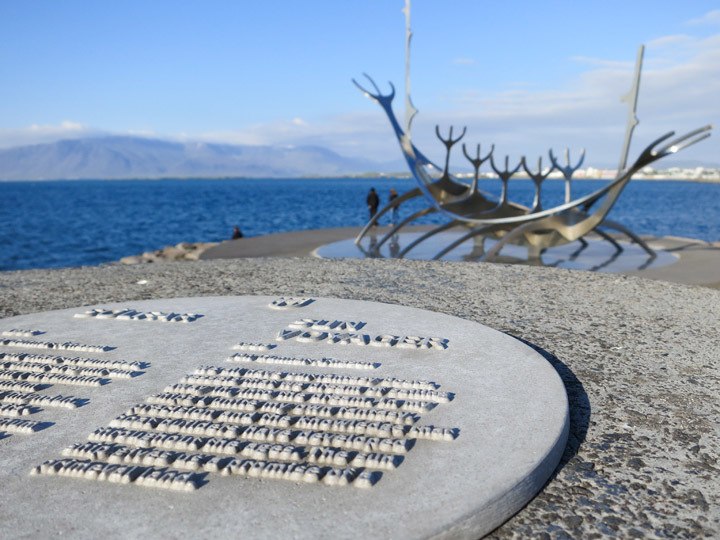 Like all the other amazing public art in Iceland, seeing this monument is completely free. Taking advantage of Iceland’s 24 hour summer sun and my own jetlag, I returned one night around 3am and caught a completely different view. Note: In person it was actually lighter than this, believe it or not! I manipulated the settings on my camera though to get more of a silhouette. 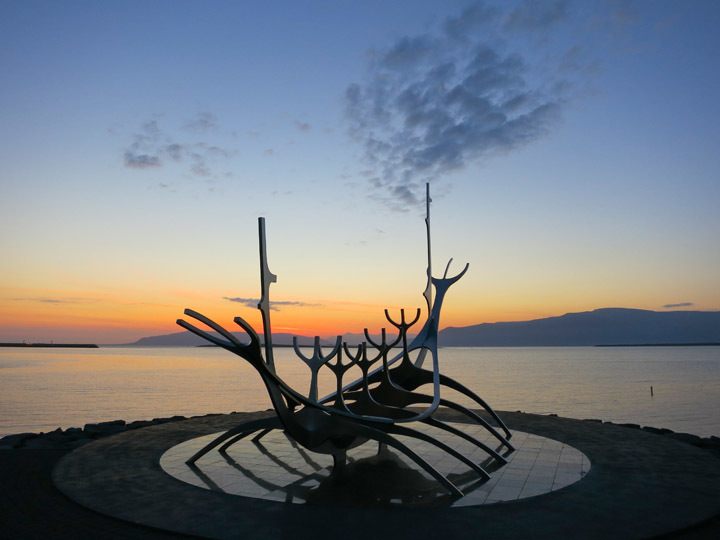 I’m a huge fan of going to markets in foreign countries… you never know what you might find! This weekend market fascinated me mostly for the fact that every single vendor accepted plastic for even the smallest purchases — Iceland truly is the closest thing to a cashless society I’ve ever encountered. 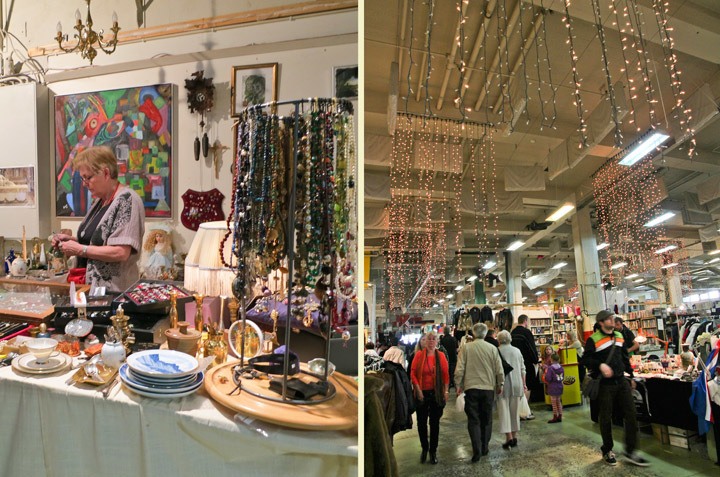 Perhaps it was the overwhelming fishy smell or maybe I just wanted in the shopping mood, but I wasn’t blown away by this market. One thing that did change my tune was a vendor selling vintage stamps, postcards and related paraphernalia. I walked away with two vintage postcards — my one souvenir purchase of the trip. 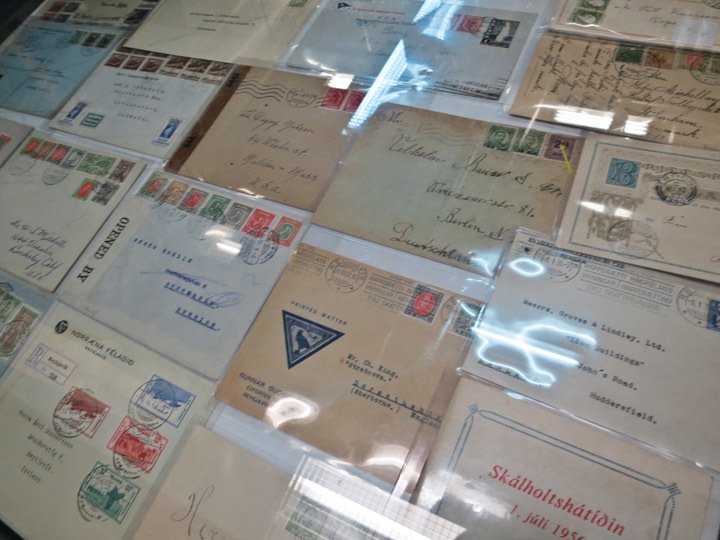 We are a family of movie goers, and so while researching our trip to Iceland I knew we would make it to one of the several small indie theatres in Reykjavik. We ended up stumbling into Volcano House, a cafe, small geology exhibition, and a cinema that every hour on the hour shows two documentaries chronicling some of Iceland’s most famous eruptions. 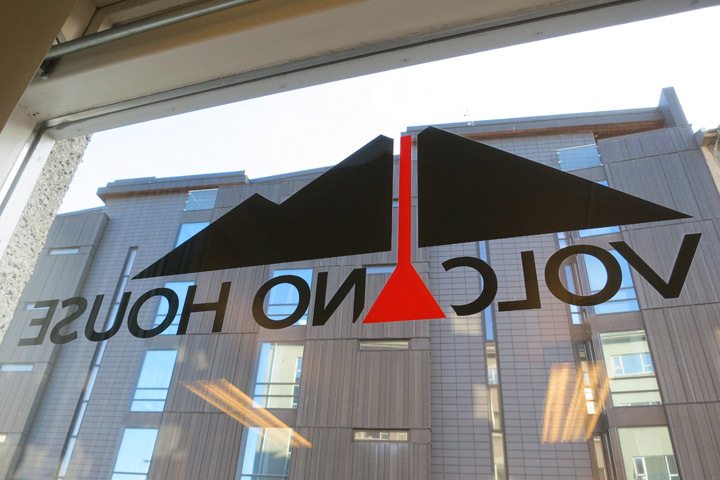 We had the tiny theatre to ourselves while we learned about the 1973 Eruption in the Westman Islands and the more recent and internationally famous Eyjafjallajökull eruption of 2010 — which famously grounded flights all across Europe (and kept my Dad from a trip to France!) 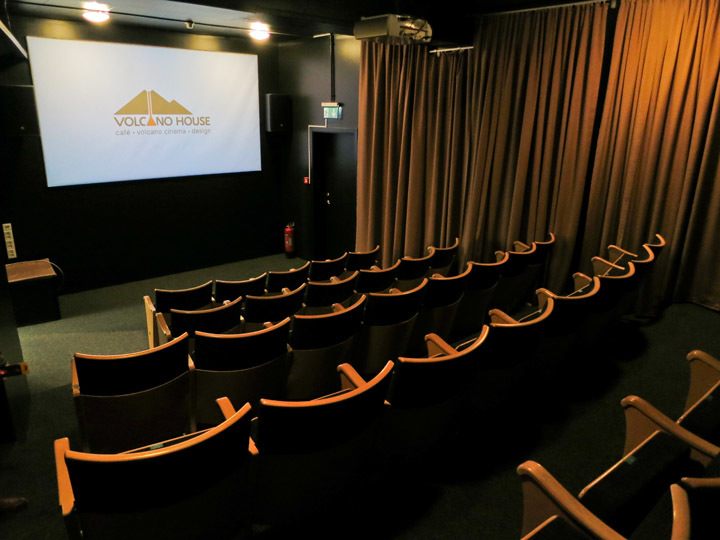 At 2,000 kroner ($10), this was a fairly affordable way to support a fun business and get a bit of Icelandic history. Volcano House also hosts events like jazz nights, has a great selection of hand-made goodies in the cafe, and boasts a pretty hilarious little gift shop. 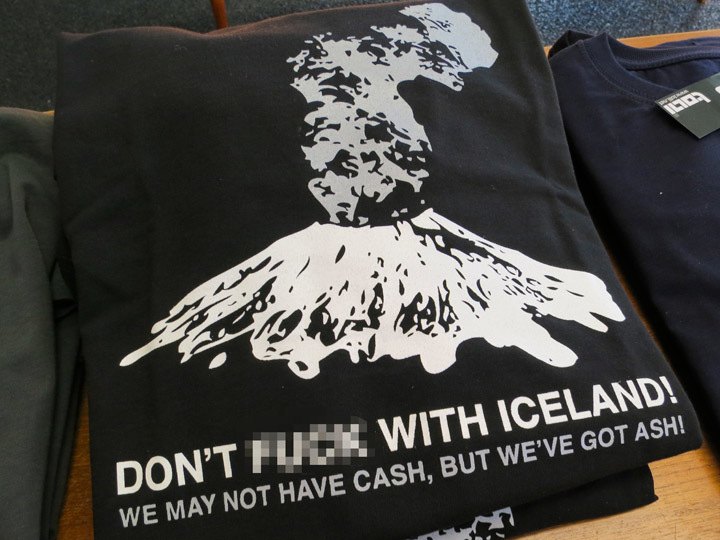 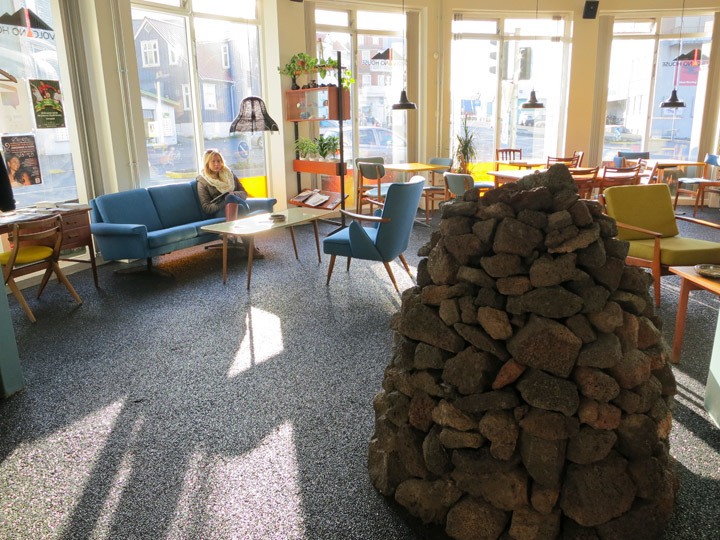 There was so much more to see in Reykjavik — we barely brushed the surface! When I return (and I know I will) I look forward to hitting up many more Reykjavik sights — the countless art museums and galleries, the tiny museums, the crazy architecture — I want to see it all!

Have you been to Reykjavik? What was your favorite sight? If not, which of these would you hit up while in town?

Whaling in Iceland: My Plea to Tourists