In the past few years I have become a more and more active person, and that translates over to my travels. When researching a new destination I’m always looking for adventurous and physical ways to explore. So when I saw rave reviews for Reykjavik Bike Tours on Tripadvisor — also known as my online travel bible — I knew I had to get involved. 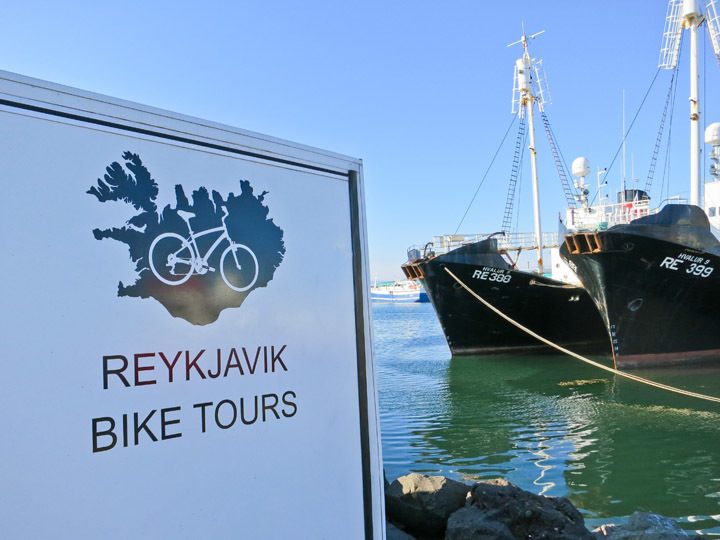 I’m a huge fan of bike tours when I travel — I dragged my family on one through Bangkok and gave myself a self-guided ones through Siem Reap and Ayutthaya. However, all of those had a big drawback — it was HOT! So I was looking forward to this tour, where I planned to work up a sweat by pedaling hard rather than by simply pausing in the shade. 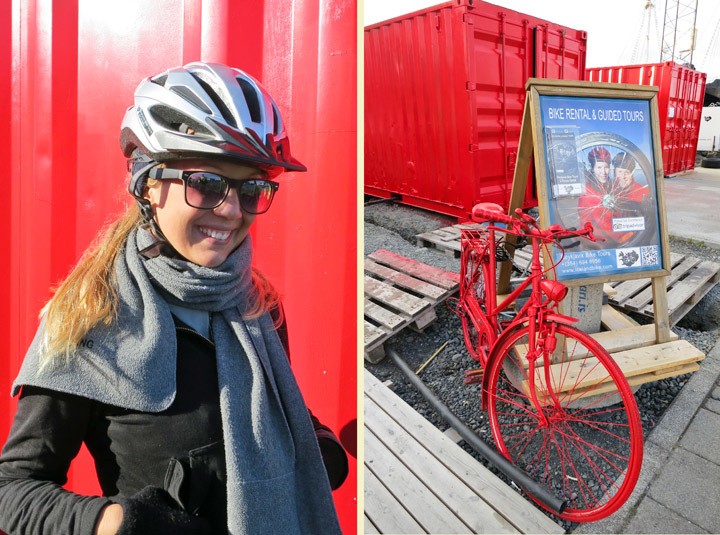 My mom has become a pretty avid biker recently as well, so we signed on for the Coast of Reykjavik tour one evening while my sister logged some alone time in the hotel. I think the key to group travel is to not actually be in a group all the time, don’t you? 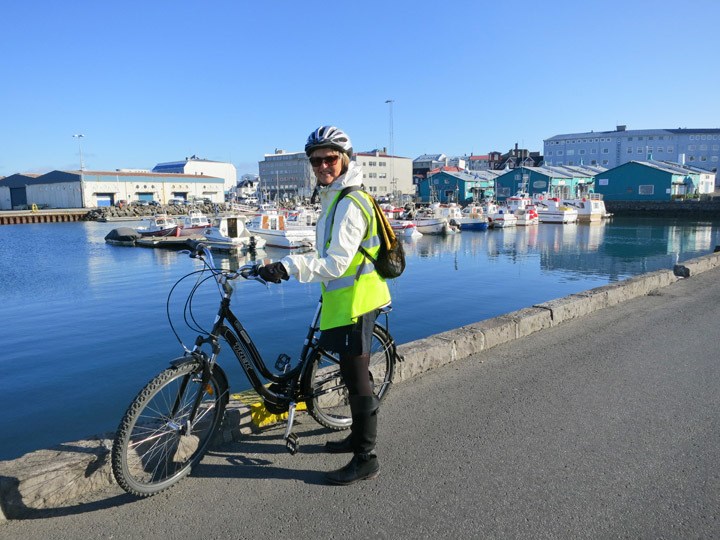 All tours start in the harbor near the whale watching boats. We worried that we might not be able to find the group, but the bright red shipping containers and bicycle were hard to miss! We were each assigned a bike with a cute Scandinavian name and a plate to identify it — so we didn’t mix them up during breaks. We kitted up in the provided bright vests, helmets, and warm gear and we were ready to go. 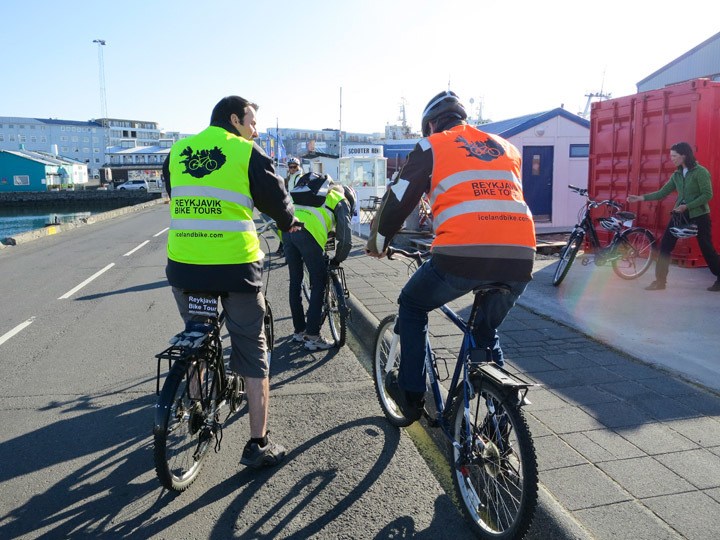 Our tour would take us all around the Reykjavik coast and peninsula. We started by riding through Reykjavik proper, and made a quick stop at Ráðhús, the City Hall. Another example of Iceland’s quirky architecture, this building features a walkway that brings you underneath the reflecting pond to enter. We tried to return on another day to see the massive 3D map of Iceland that is housed inside but alas — the building was closed to visitors during our stay due to the elections. 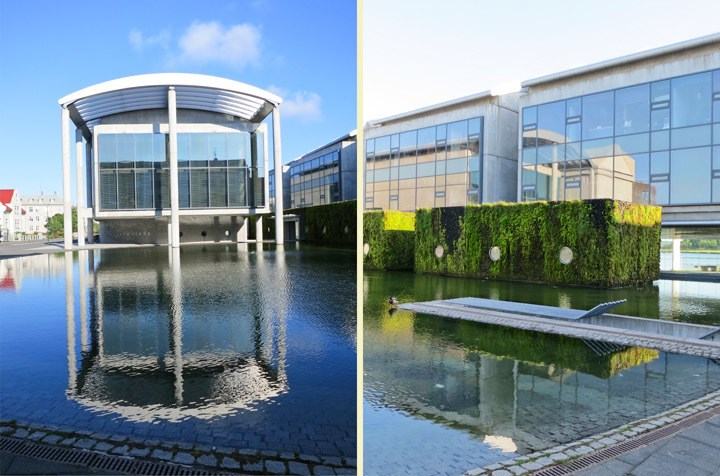 We then rode past Tjörnin Pond, a major landmark on Reykjavik’s map. Can you spot Hallgrímskirkja in the background of this photo? 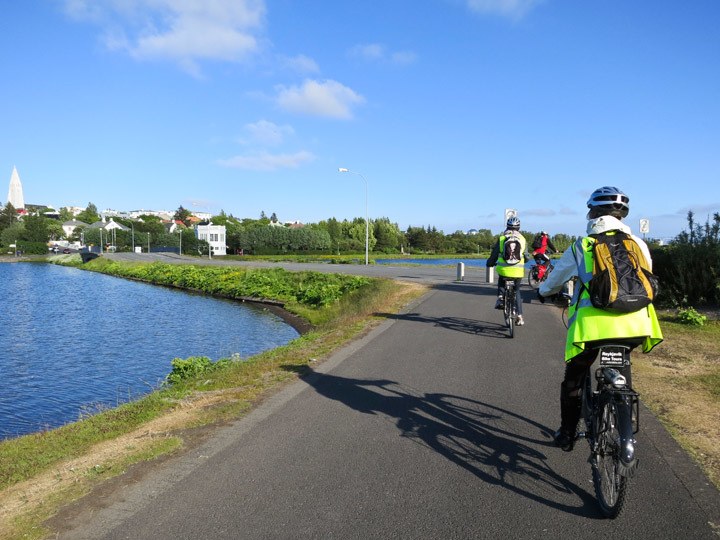 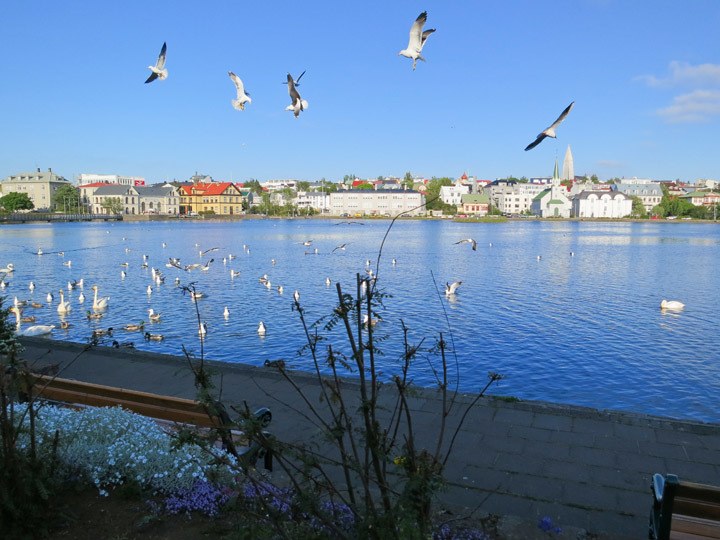 After passing the Perlan Center and finally outside the city proper, we reached Nautholsvík thermal beach. A beach in Iceland? Sounds crazy, but during summer days it can be hard to find an empty spot on the sand. This place fascinated me — not only is that sand imported from Morocco, but the water is heated using geothermal energy! In most places in the world it would be unthinkably wasteful to try to heat the ocean, but here in Iceland there are so many naturally occurring hotpots that they basically filter the overflow here. 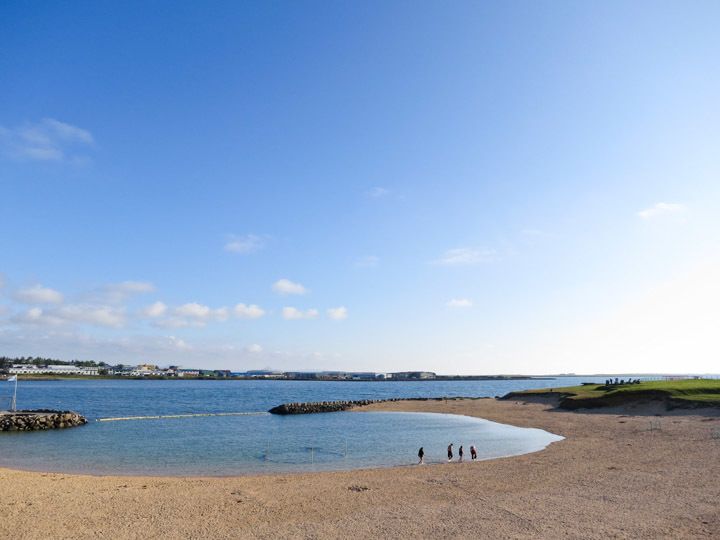 The vast majority of our ride was along the coastline, admiring the sea and the beautiful coastal homes and the amazing coordination required to take photos while riding a bike. Once again I was so grateful that I had ordered the Canon PowerShot S100

just in time for this trip. No way would I be able to one-handedly capture these photos with my Canon SLR! Biking footage in my One Week in Iceland video is also shot with the little point and shoot — its such a great camera! 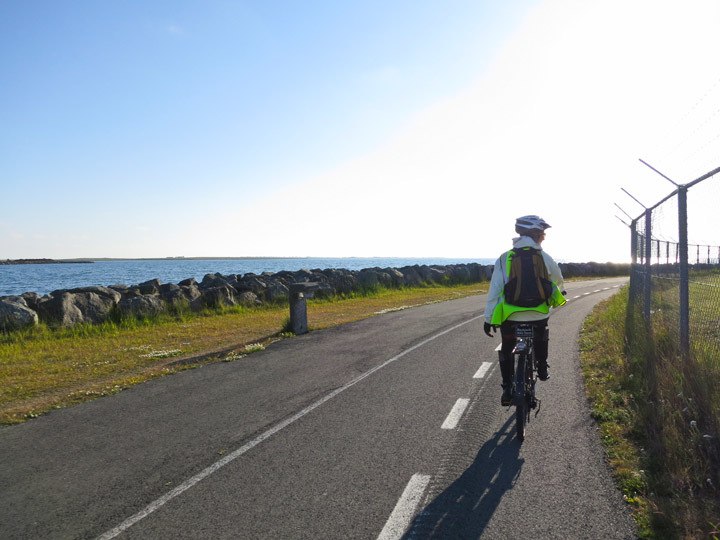 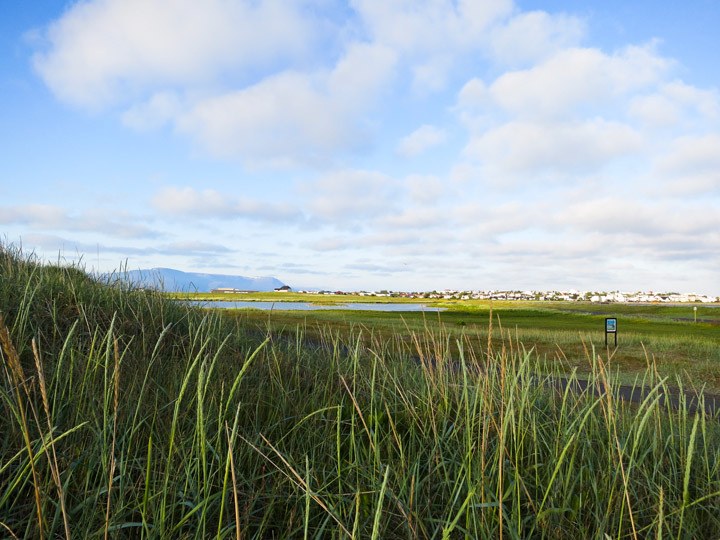 Our group was a pretty hilarious mix. There was my mom and me, plus a group of four men from Amsterdam, plus a Canadian woman who challenged everything I thought I knew about how slow a person could possibly physically move. Putting her in a group with my mom and I, who are fairly in shape, and four men from the country that basically invented bike riding, and you’ve got an interesting dynamic. I really felt for our guide who handled the whole thing with humor and grace, and peppered us with interesting facts about living in Iceland. 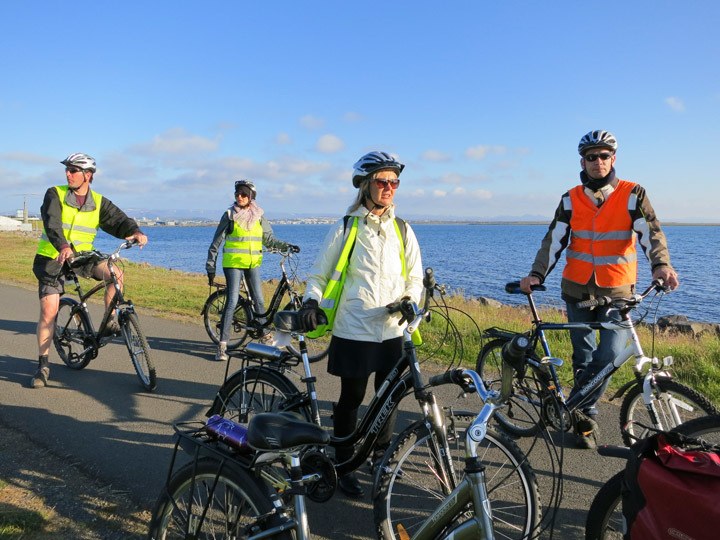 At one point, he even discreetly pointed out Björk’s house! I was trying not to play it cool and not be my true obnoxiously celebrity loving American self, so I refrained from running up and taking tons of close-ups. But my mom did capture a peek of it in the photo below — it’s the black house (of course). 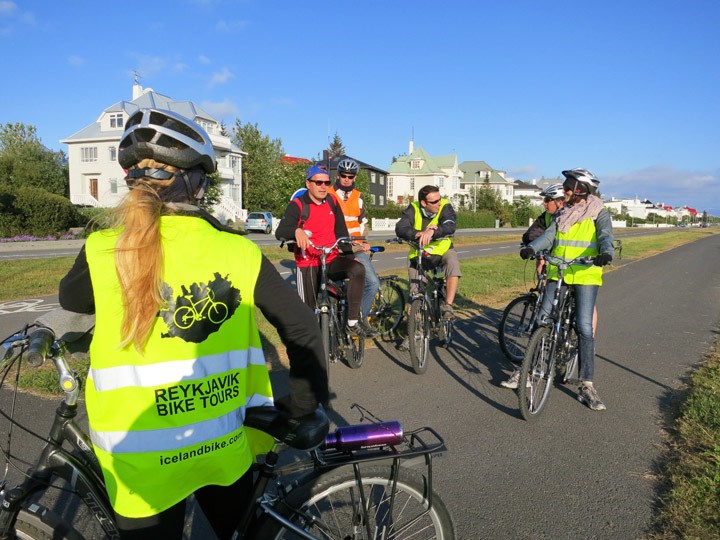 While Iceland is infamous for its 24 hour summer sun, things do get a bit duskier in the evenings. This was around 9pm, and is the darkest things would get all night. It’s a very surreal experience. 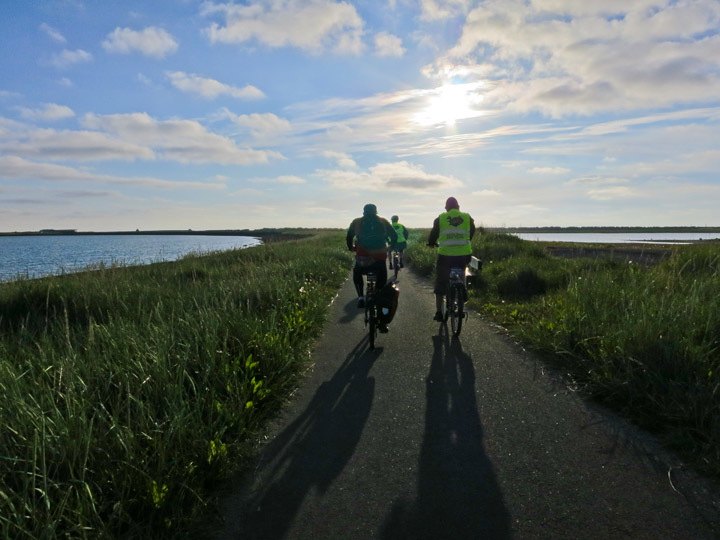 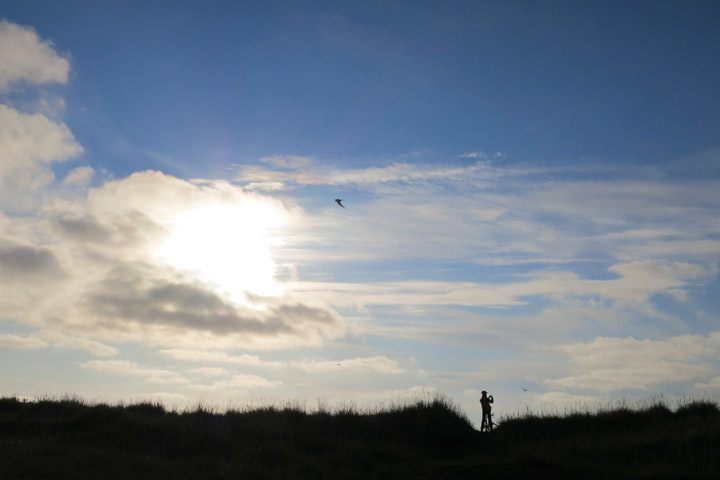 We rode all the way to the end of the peninsula and 11 miles later we ended up back where we started, in the Reykjavik Harbor. Along the way we passed famous buildings, beautiful beaches, suburban areas, lighthouses and universities. I saw a side of life in Reykjavik I would not have observed otherwise, and got to stretch my legs doing it. 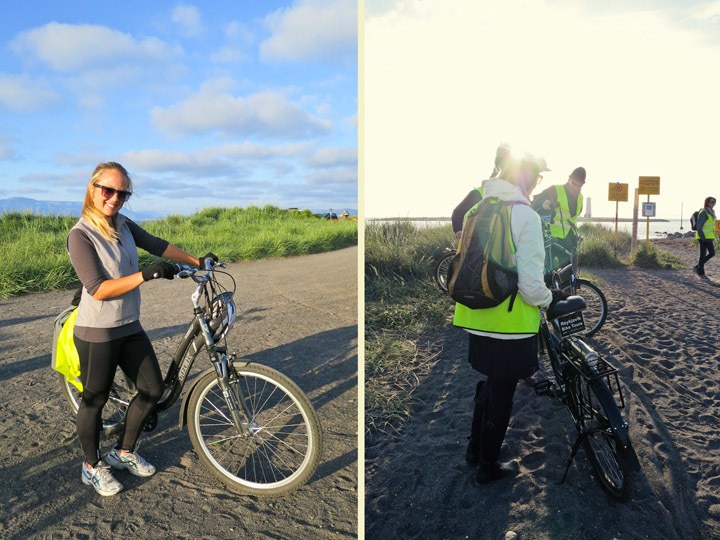 At $40 per person this isn’t the cheapest tour around but actually represents good value for Iceland. Note, this is the only activity we did that we weren’t able to prepay for and required cash, though most currencies are accepted.

While Reykjavik Bike Tours offers a variety of tours, I thought this itinerary was the perfect way to spend an evening in Iceland — and get energized to take advantage of the city’s infamous nightlife! 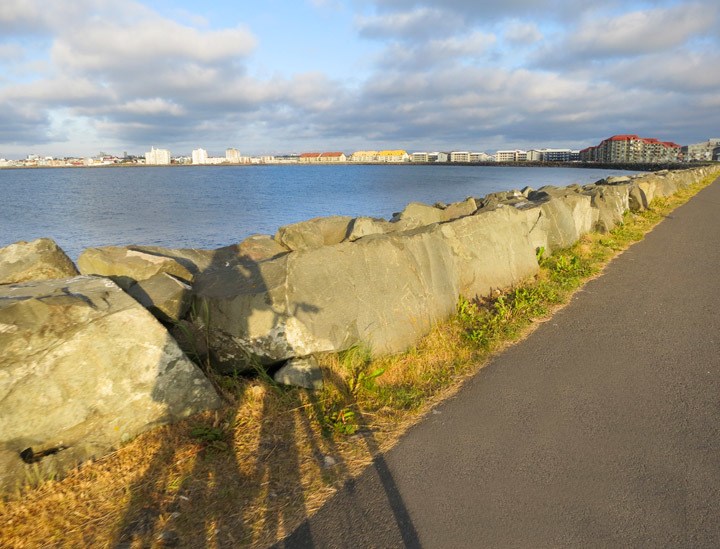 Have you been on a bike tour on your travels? Where?

Note: I was in no way paid or perked for this review. I just wanted to share my experience with a great company!

Where to Eat and Stay in Reykjavik

The Sights of Reykjavik Photo of the Week 63
53 Comments...