I might have taken a laid back approach to my week in Lake Atitlán, but there are plenty adventure opportunities on hand for those who want to be a bit more active while visiting this high altitude Guatemalan highlight — paragliding off a volcano, hiking up a volcano, or diving below a volcano all come to mind. Of course, you know me — I went for the latter.

And I was perfectly situated to do so while staying at La Iguana Perdida, home of ATI Divers. 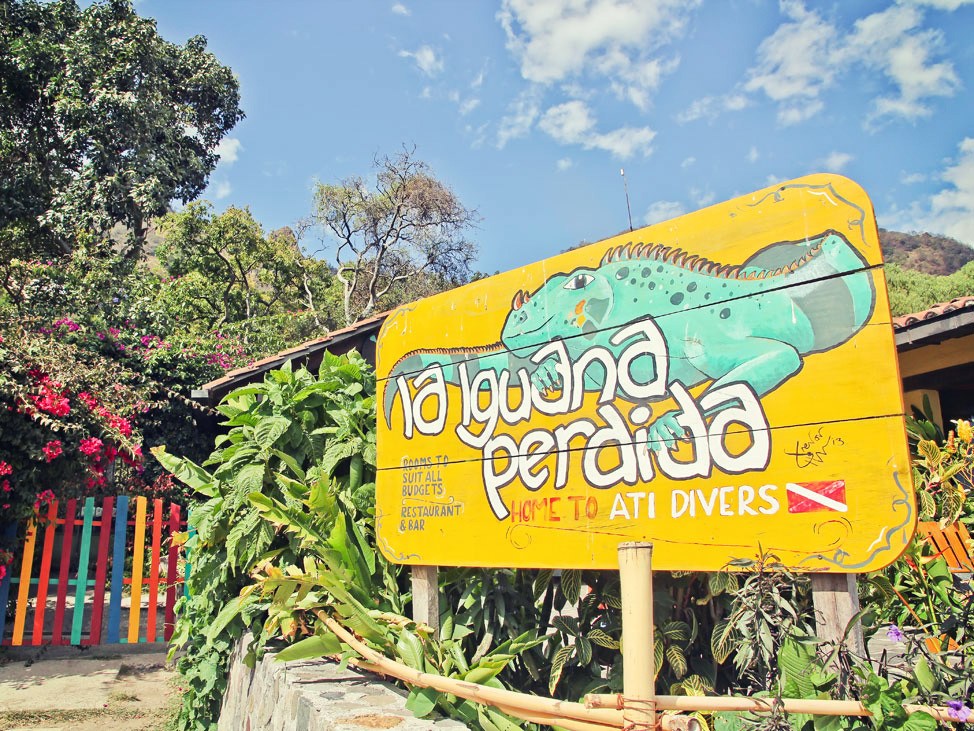 I’d heard all the warnings — temperatures are low, visibility even lower, and there is limited sealife — er, lakelife? — to see. Still, a close friend in Thailand had recommended it as a unique experience, and I don’t think I could turn down the chance to try scuba diving in a high-altitude volcanic lake, regardless.

I mean, the views on surface interval wouldn’t be too bad. 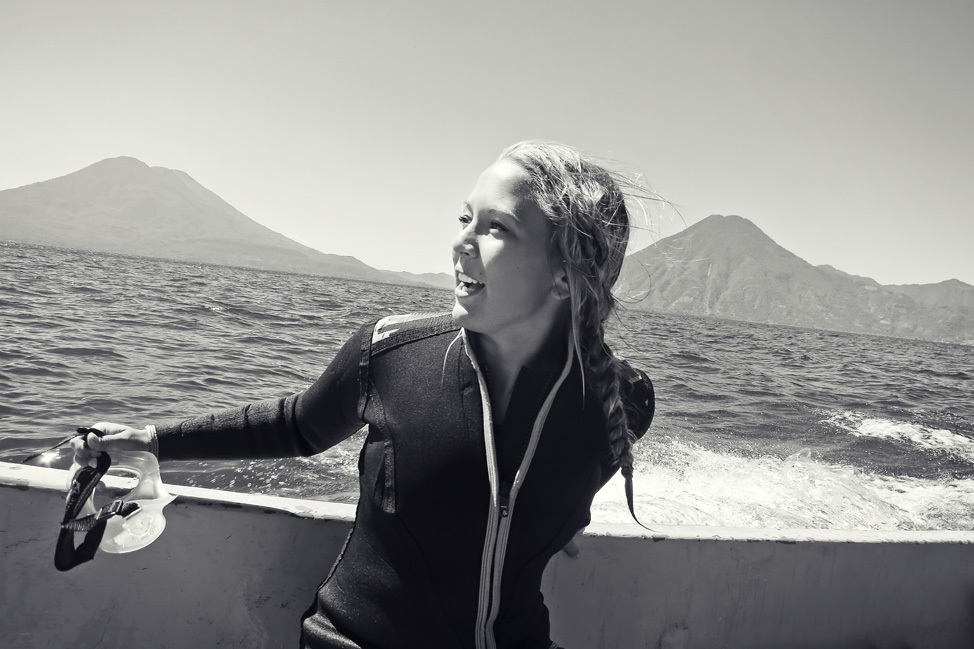 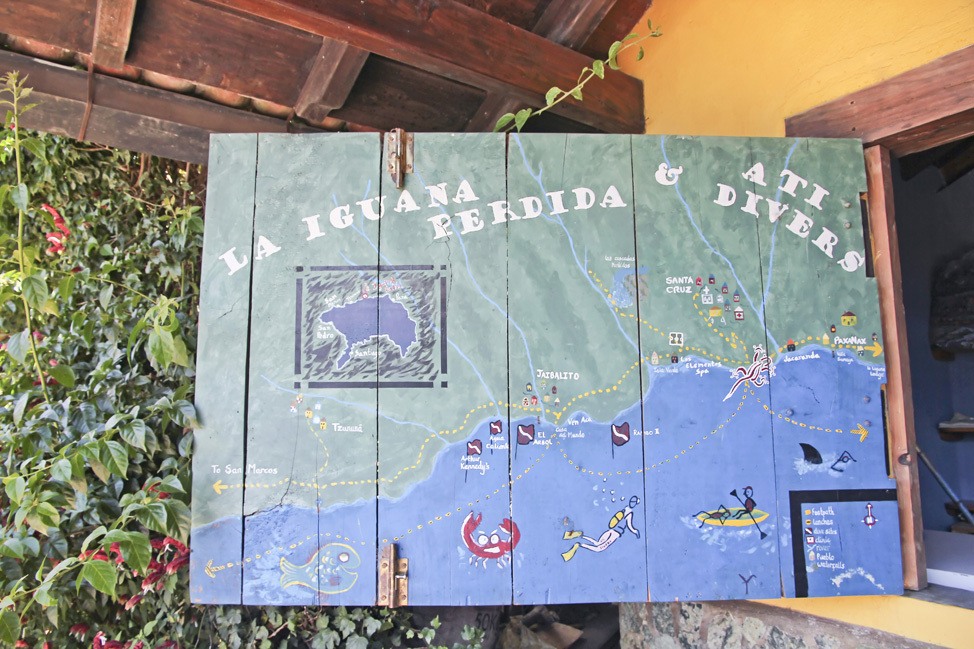 One morning at breakfast, I joined the resident divemaster, his trainee, and an American couple living in Guatemala for a dive briefing. The wind was howling and the water just looked cold. “Maybe we should reschedule for tomorrow?,” I ventured hopefully, all while knowing I’d only delay the inevitable. But no, the other couple was leaving the next day, and divers cannot leave the lake the same day they dive. Because Atitlán is ringed by tall volcanic ridges, leaving the lake for any destination involves altitude gains that cannot be made for eighteen hours after surfacing. Hence, you must stay put at lake level for the remainder of the day, and night, after diving.

So we suited up instead. 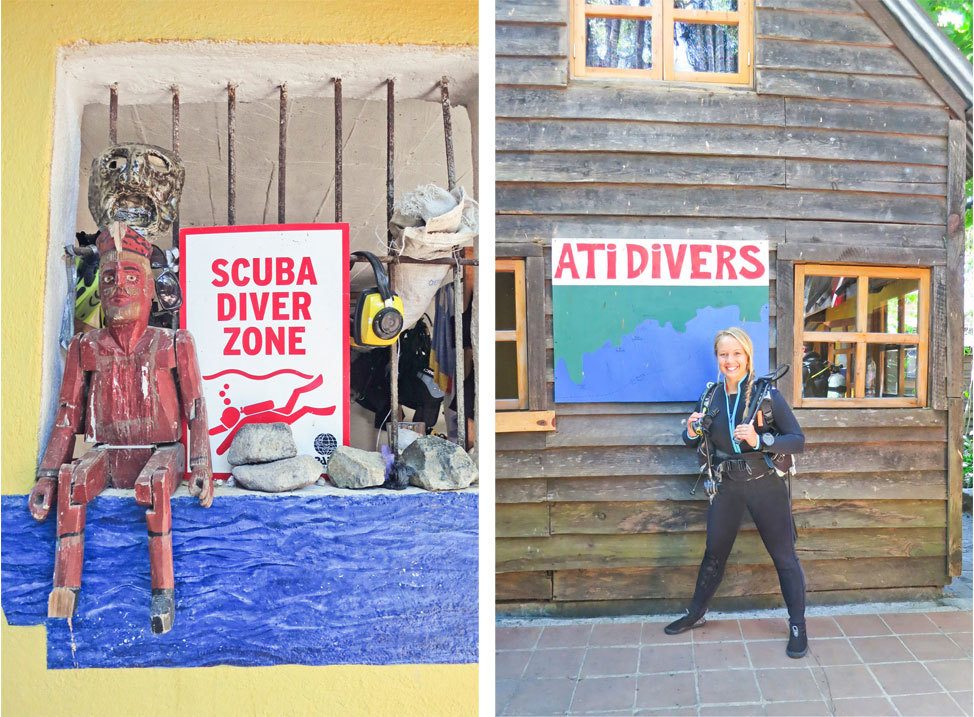 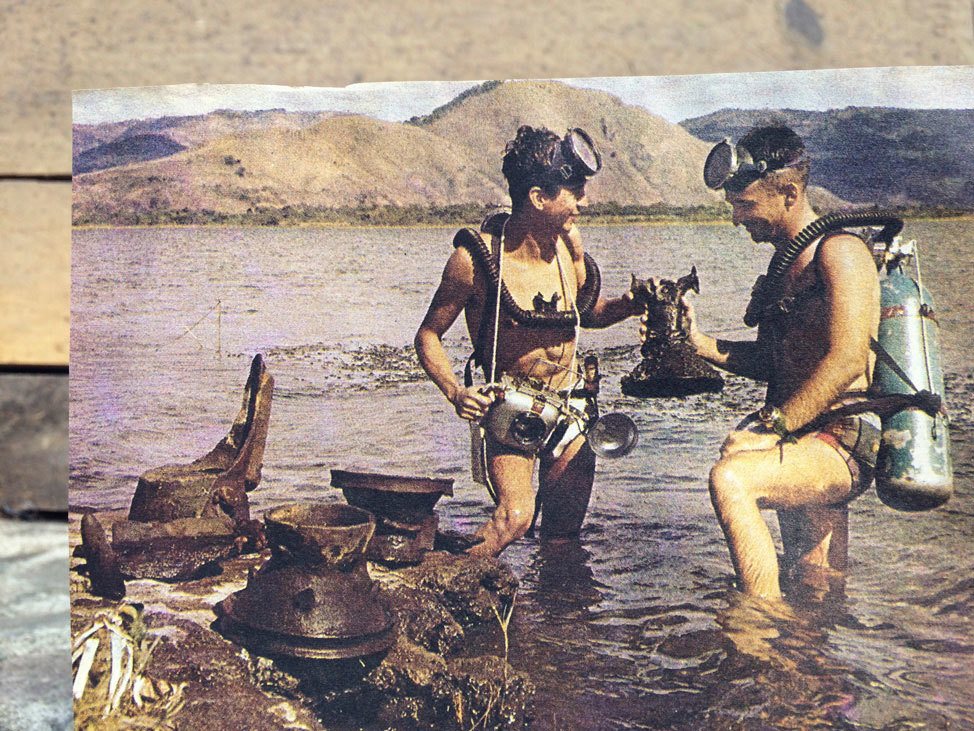 a historic photo of the lake from the dive shop

And we were off. 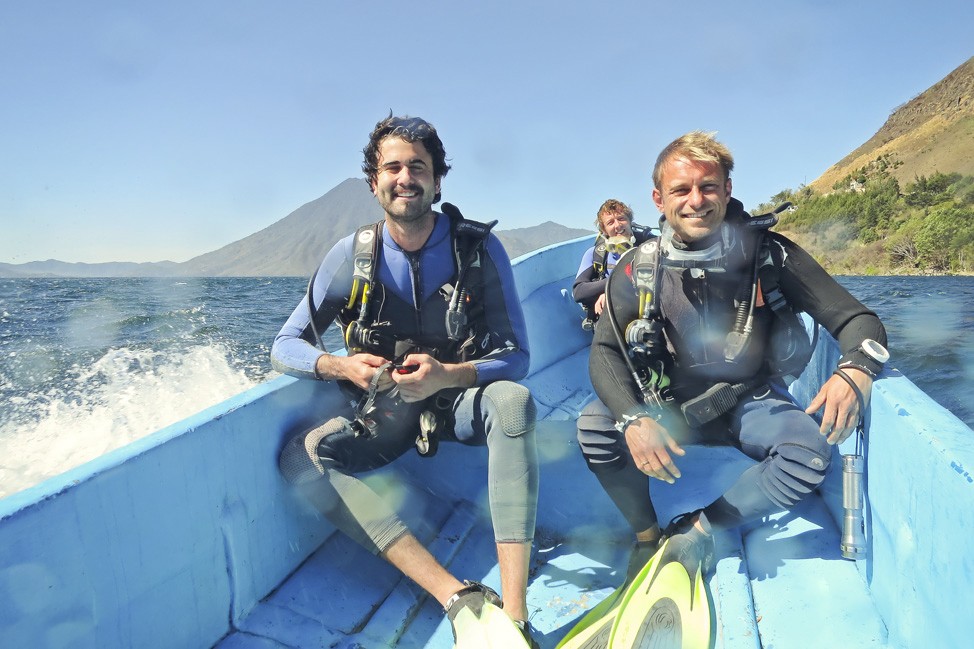 Our first dive site was one I’d heard good reviews of. Because the water in the lake continues to rise, entire buildings now sit below the surface. We were going to visit one such shell of a hotel. As we backrolled off the boat I was pleasantly surprised by the temperature off the water I plunged into — it stays at about 70 degrees at the surface year-round, though at depth we’d clock down to 66 degrees. When I surfaced to give the all-okay signal, the wind felt like a slap on my face. 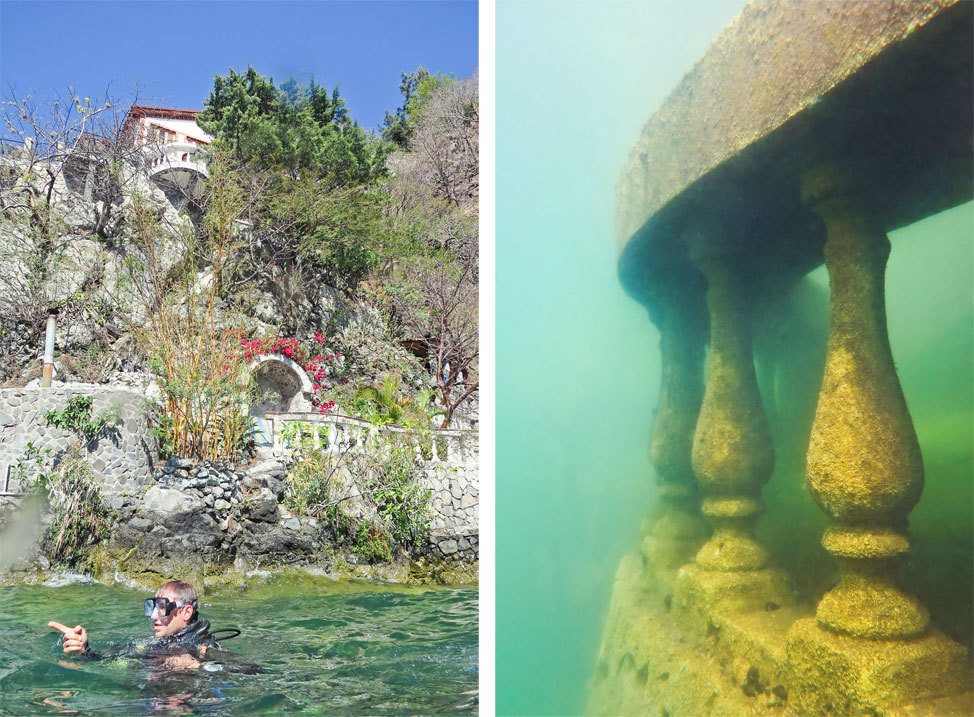 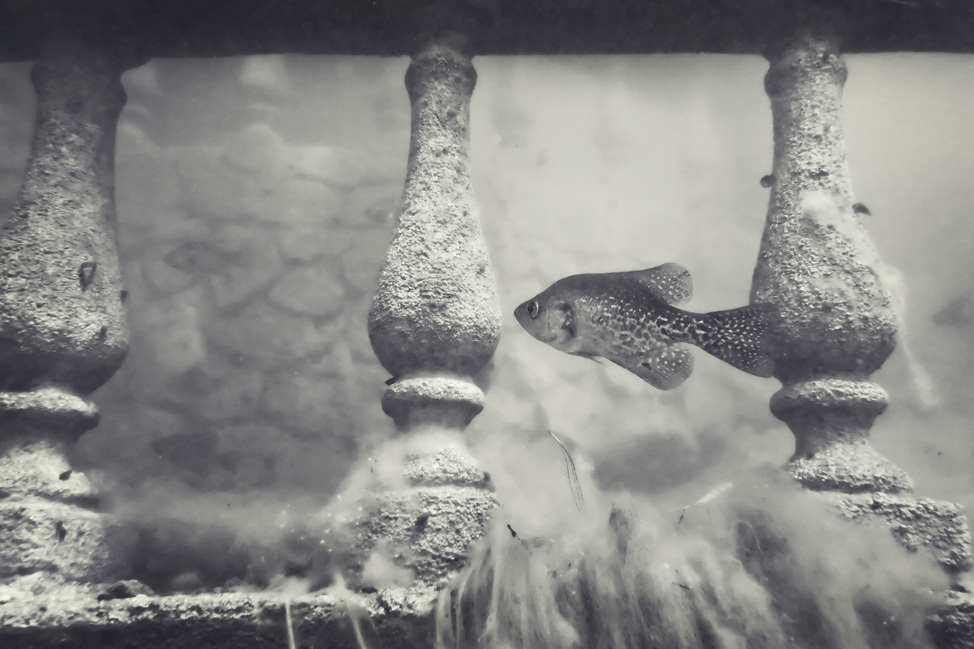 Descending down the murky waters of an underwater stairwell is certainly a distinctive diving experience — and an eerie one. Later, the divemaster would admit that the visibility that day was about as bad as it gets in the lake. For someone so focused on underwater photography when I dive it was a little disappointing, but you certainly can’t win them all — and I’ve won many when it comes to good luck with dive conditions.

One other thing that contributed to the air of eeriness? The fish graveyard also known as Lake Atitlán. During our dive briefing I’d been fascinated to hear the history of diving in the lake, and of the lake itself. One of the more tragic chapters involved Pan Am’s attempt to turn the region into a sportfishing destination by airdropping a lake full of invasive species of fish into Atitlán in the 1950’s. The outcome, as anyone who has ever heard of an environmental impact study might have gleaned, was not positive. One introduced species — the name now escapes me, but it is pictured above — spawns frequently but dies quickly due to its inability to adapt to the lake’s temperature shifts. Hence, lots and lots of dead fish, which I had not been warned about on any tourism brochure. 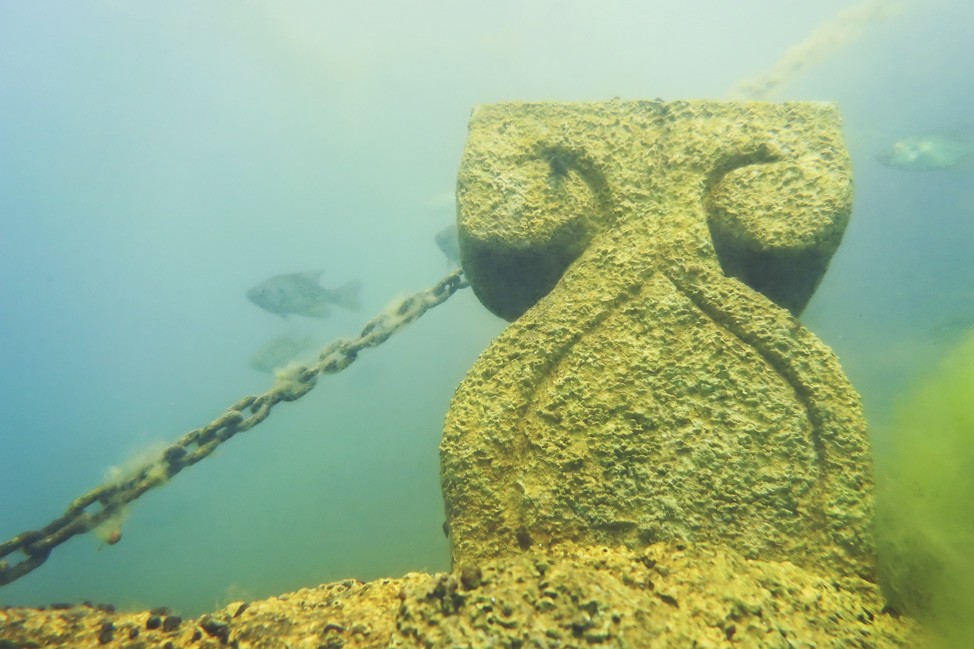 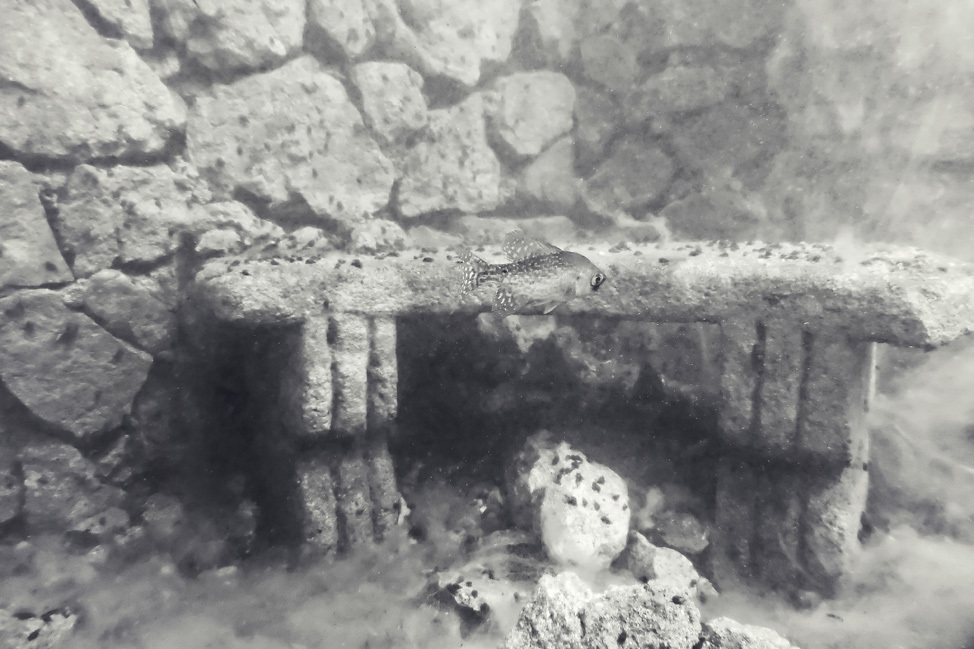 Yet it was a fascinating dive. Hovering over a balcony it was easy to imagine a guest once lingering on it over their morning tea, as I’d that morning from the deck of Iguana Perdida — would that too someday be underwater? Petrified trees that once gave shade now provides a playground for fish, and a still-functional tap that once bore drinking water now supplies underwater entertainment for divers. The water that gushes when you reach out and turn the creaky faucet is noticeably warmer than that it pumps into. 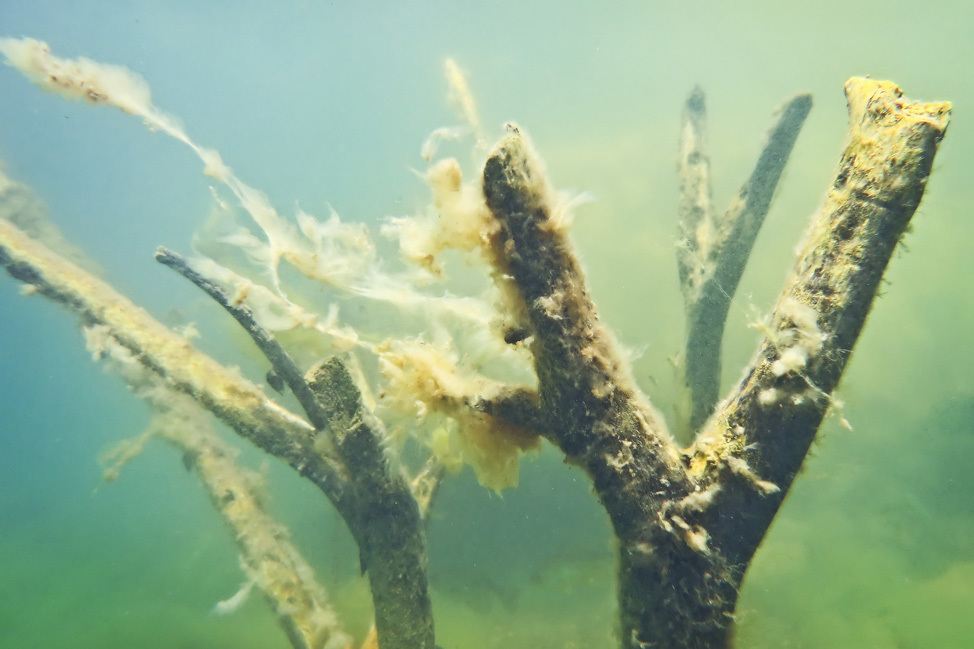 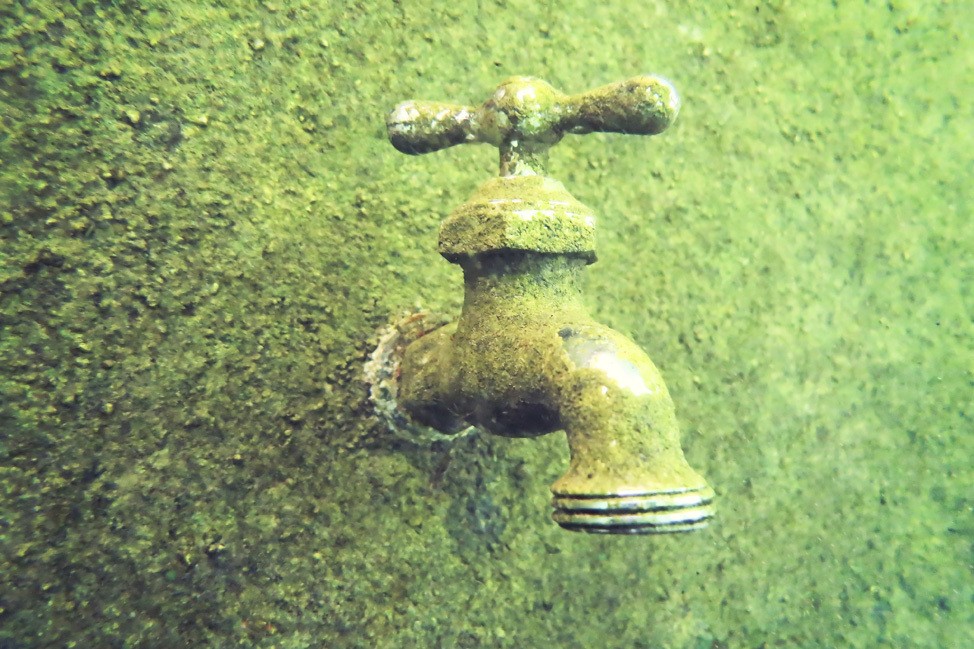 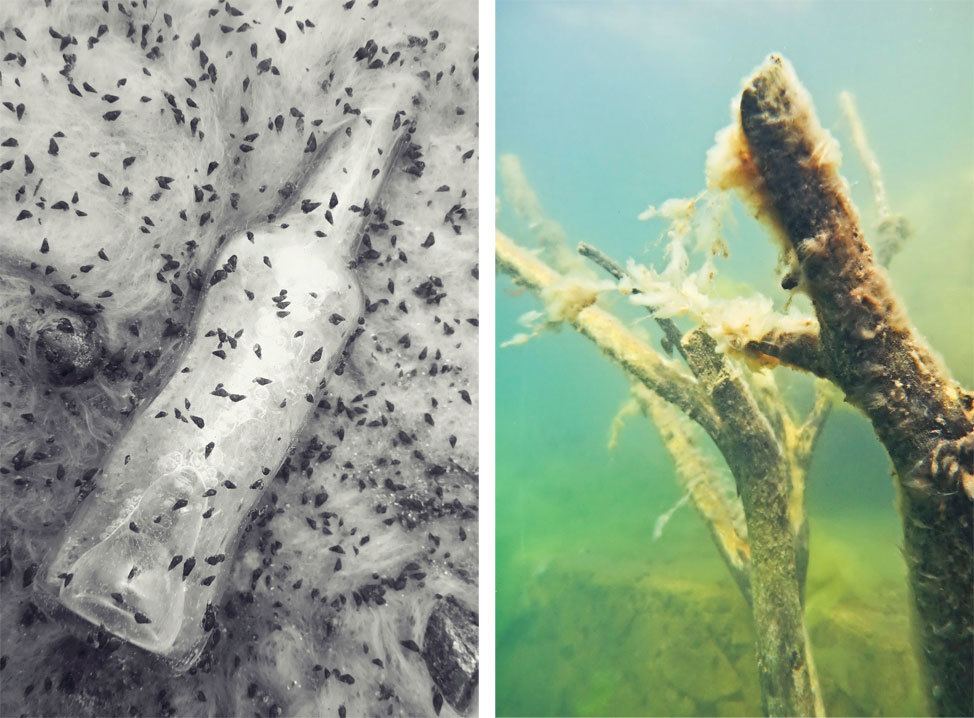 After a surface interval in which I tried to will a hot tub into existence at La Iguana Perdida, we head back out for a second dive. This time we dropped off at Aguas Calientes. This dive would bring us sixty-five feet deep along the active fault line of one of the lake’s looming volcanoes, which sounds pretty impressive until you consider the fact that the lake reaches depths of over 980 feet — we were barely covering a blip.

My body temperature already low from the first dive, I was shivering within moments of descent. Good thing we were on the hunt for heat. Every few feet we’d plunge our hands into the silty floor of the lake, kicking the sand into beautiful patterns and getting literally and metaphorically warmer and warmer until we finally found the fault line — it was so hot that I could only stick my hands in for a few seconds before it felt like they were burning. Deep below the surface of Lake Atitlán, I’d never felt the power of an active volcano more intimately. 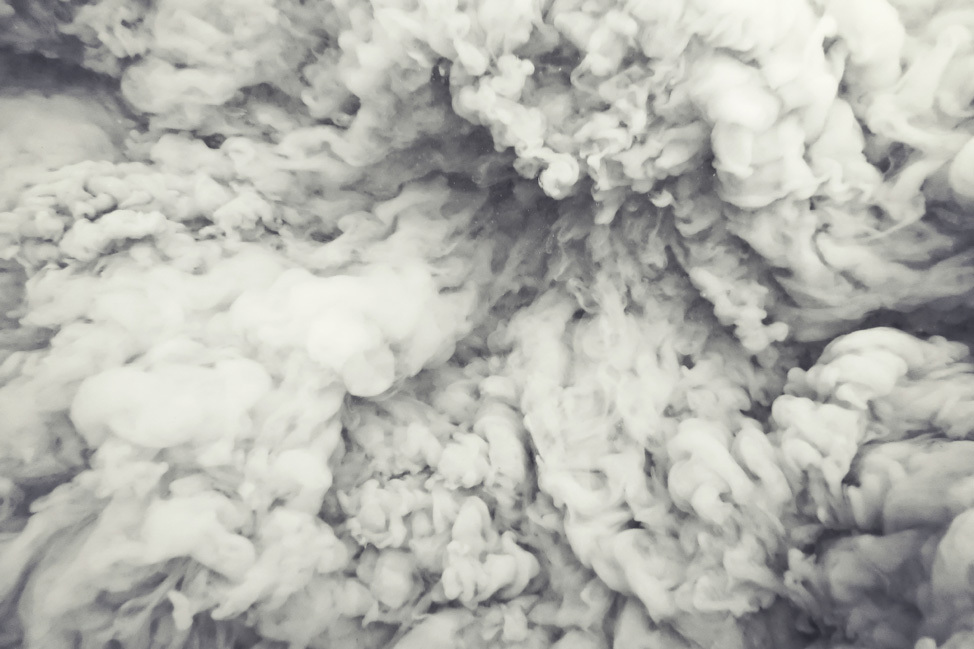 It was so hot we even boiled an egg! Once I’d properly marveled at that moment, we started working our way back up the underwater slope towards yet another sunken relic left behind by rising lake waters. This one was a former pool, sauna, and wet bar — a family’s epic lakefront deck, reclaimed by the lake itself. We watched as crabs scuttled in the corner of the pool before entering the sauna-turned-swim-through, in which a massive volume trapped air allowed us to pop out our regulators and have a brief conversation beneath the surface. We concluded our dive with a bit of play acting in the bar area, which was still stocked with glasses and empty lake water-filled bottles.

And then it was time to go have a real drink. (Of hot chocolate, that is. Did I mention it was freezing?) 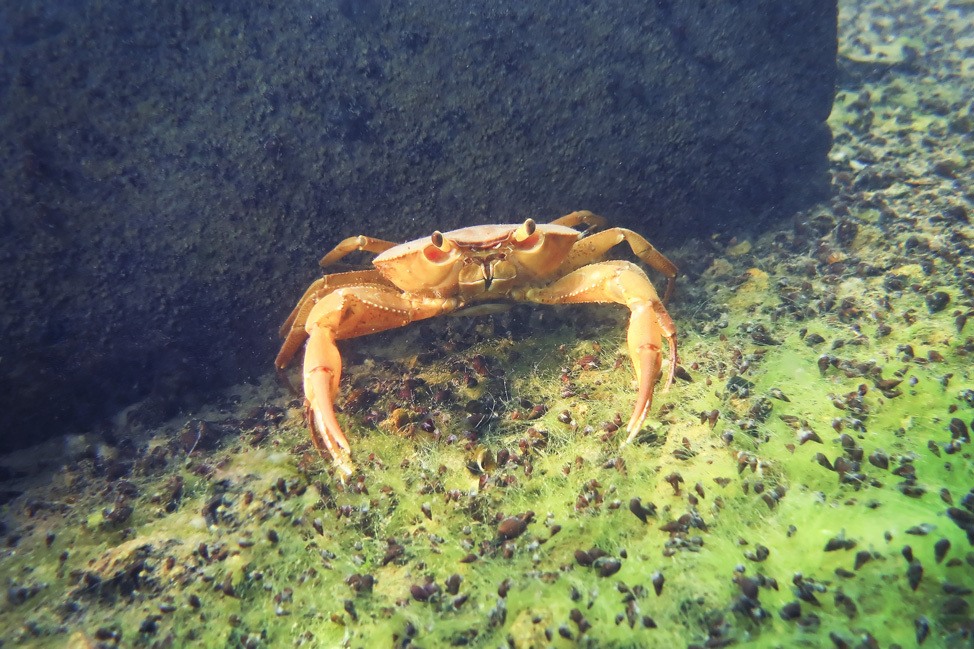 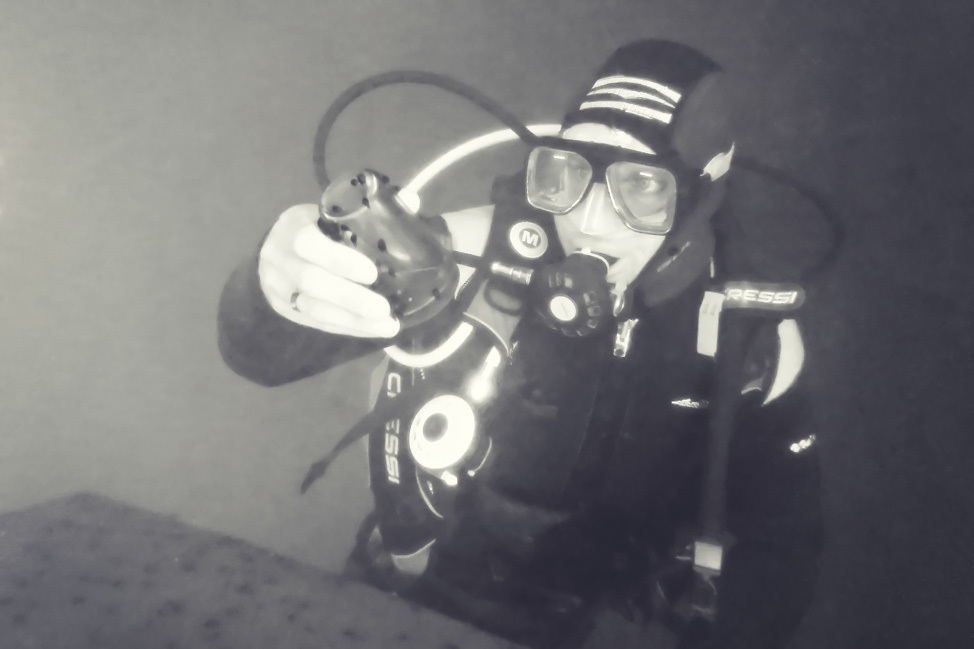 Frankly, you don’t have many options when diving in Lake Atitlán. There’s one Guatemalan-focused dive shop in Panajachel, and there’s one foreigner-focused dive shop in Santa Cruz — and that’s ATI Divers. Luckily, they’re top notch. The British owner of La Iguana and ATI Divers, Deedle Ratcliffe, was one on of the first divers to join exploratory teams around the lake in the 1990’s — she knows her stuff! Safety standards were closely followed and I felt very comfortable with the entire team.

At $65 for the day, it was a reasonably priced adventure! 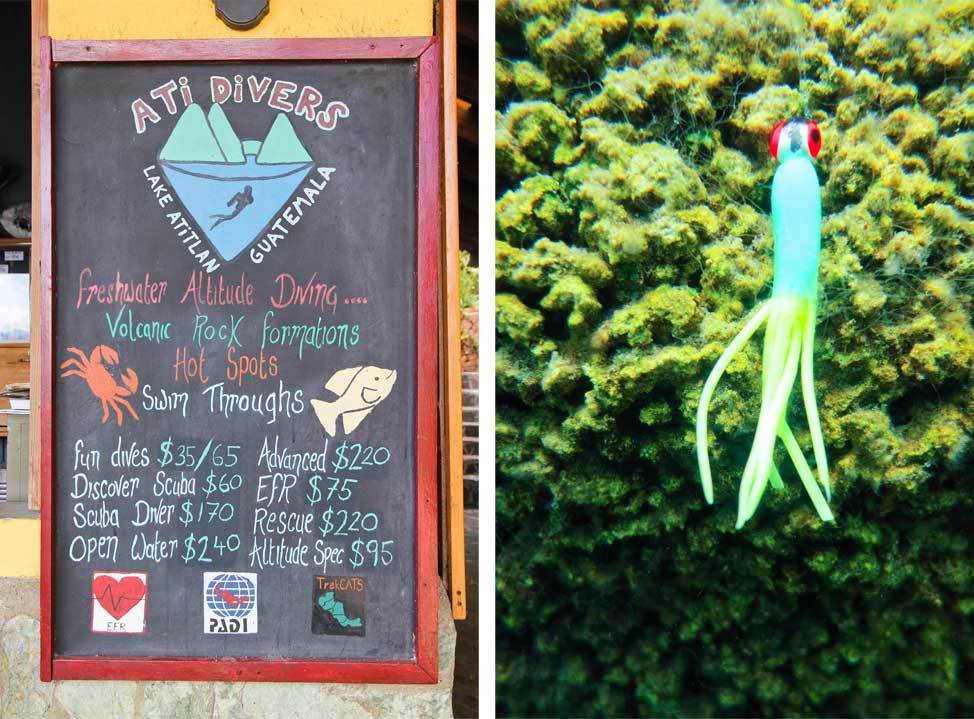 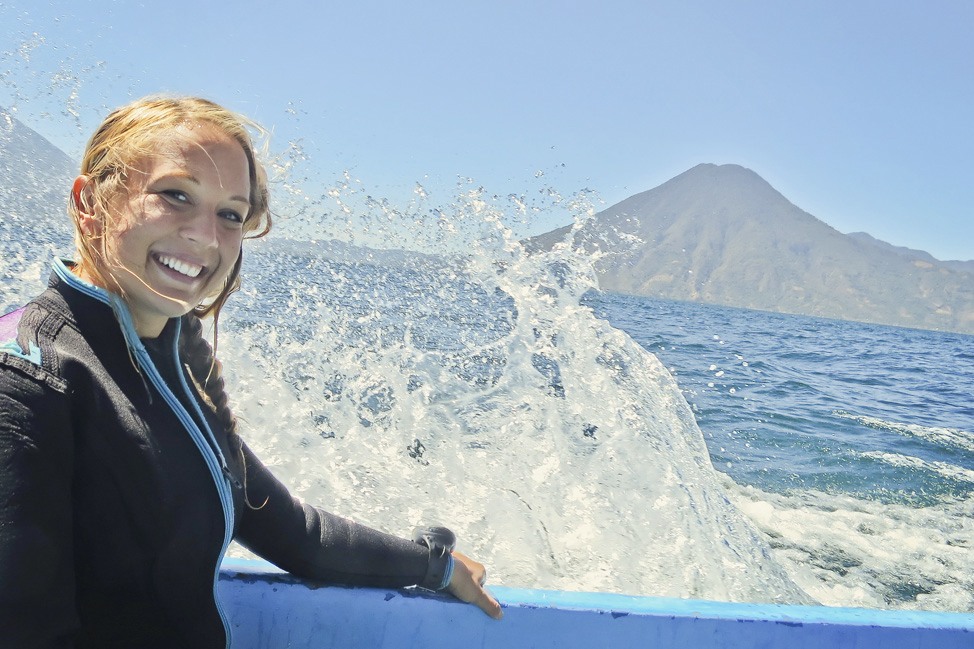 What’s been your most unique diving experience?

Photo of the Week 209: Tennessee Memories of Monterrico
62 Comments...