Stripping on The Strip: A Day of Pole Fitness Followed by a Night With The Real Life Magic Mikes

“And this spin, ladies, is known as the firepole. Someone grab an extinguisher — because you girls are on fire.”

I wasn’t sure what I loved more, our instructor Dani’s well rehearsed banter or the fact that she was conducting our entire class — Viator’s Stripper 101 at Planet Hollywood Resort and Casino — in seven-inch lucite heels. Ever since taking a pole fitness class in Thailand last year I’ve been intrigued by this fun and sassy workout, and I was itching to take advantage of one of the several highly organized class options in stripper central, Las Vegas. Deciding to make a silly day out of it, we went for the VIP option that included not just an afternoon workshop, but also tickets to see our professional male counterparts work their magic later that evening at Chippendales. 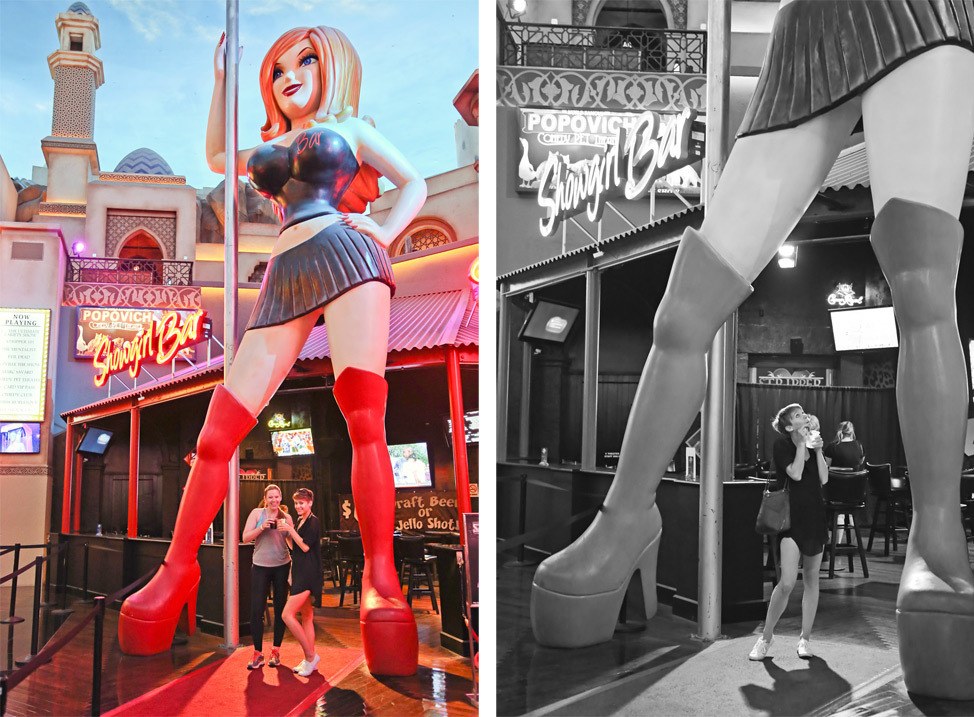 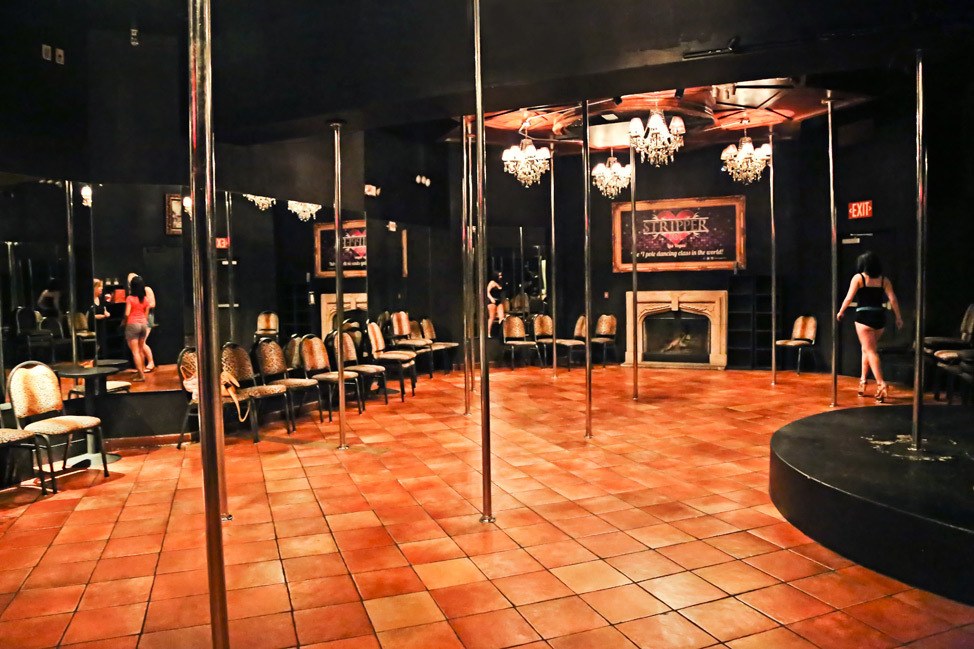 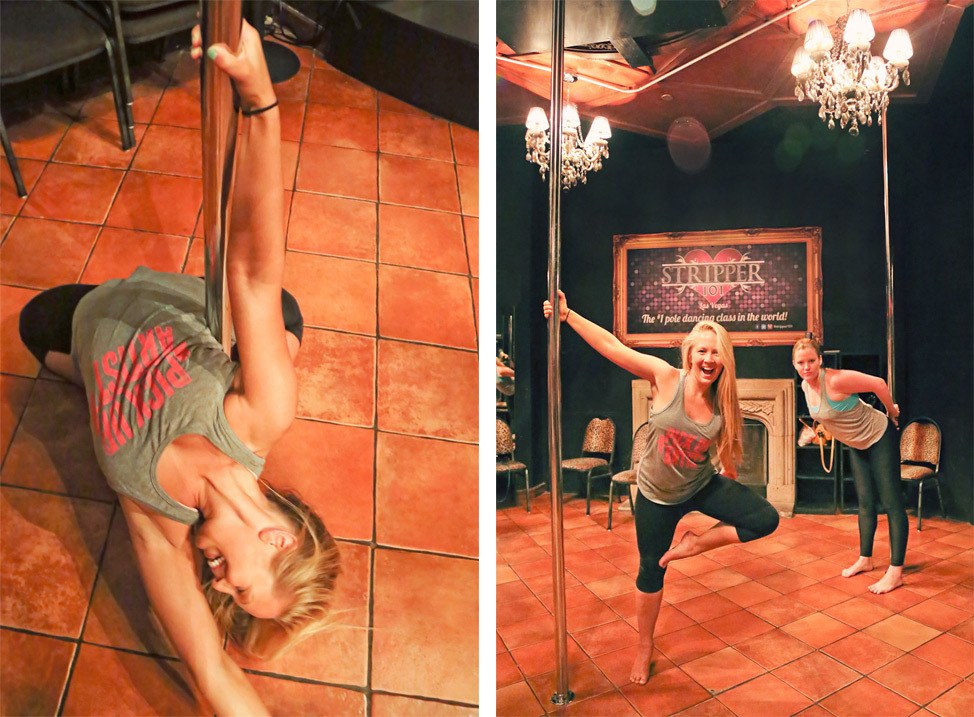 Yes, the class is taught by a real-life Vegas stripper. Pole dancing classes are increasingly popular and for the most part it appears that instructors around the country are doing their absolute best to promote their offerings as fitness programs (which is legit — can you imagine the muscle necessary to achieve this?) and distance themselves from their stilleto-wearing sisters. Not in Vegas! And no complaints from me — I loved how unapologetic it all was.

Dani even added in a little bit of striptease instruction into her hilarious class syllabus, though our sports bras stayed well secured. Despite the pantomiming of a motorboat move, the whole thing was overall pretty tame. To my surprise there were even some mother-daughter pairs in the crowd. Two things that weren’t present? Men, and cameras during class — both are banned. We did stay a little after class for a little photo fun, but the room is incredibly dark, I believe to combat shyness, so you might have to snap a couple to get a good one.

It’s a 75 minute class, which in reality means less than an hour on the poles. Personally, I’d love to see them add a Stripper 102 — not to brag, but I felt I’d mastered some of the moves before we stepped in and would have enjoyed tackling a few more advanced spins. 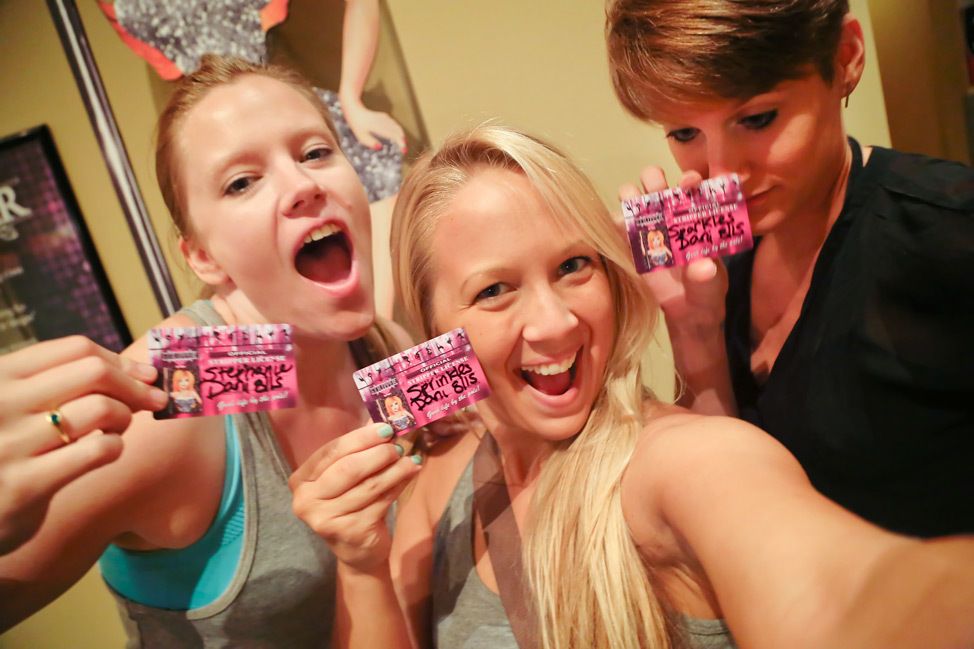 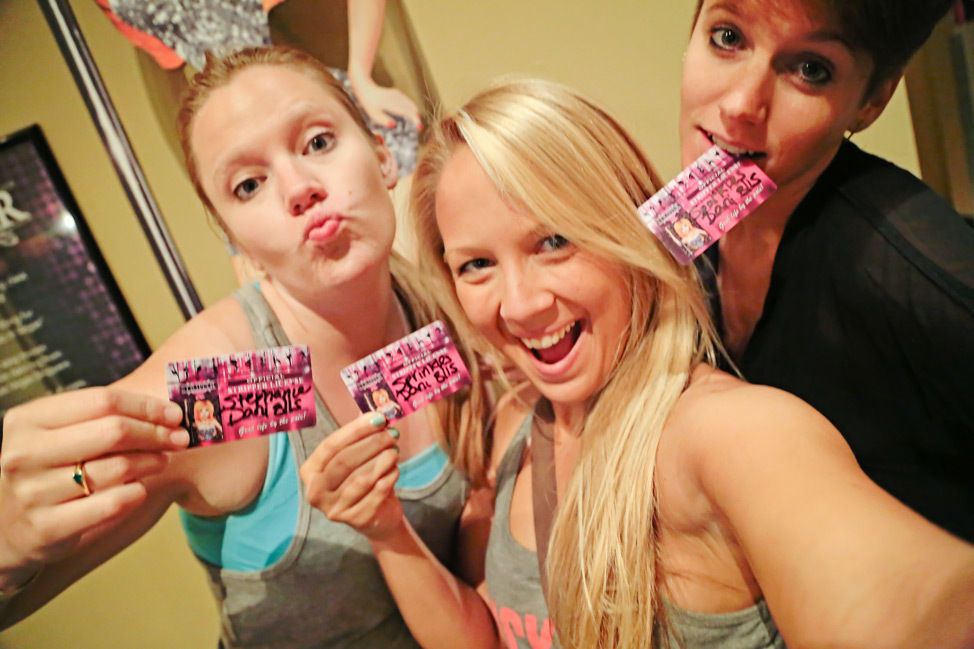 One tip: get there early! We didn’t count on how long it would take us to find the class in the labyrinth that is Planet Hollywood, or the long lines to sign in to various shows and theaters. Arriving early will allow you to snag poles near the other girls in your group, and enjoy a pre-class drink at the Showgirl Bar.

If you splurge on the VIP option, that drink can be a comped one. Regular admission runs around $37, while an upgraded ticket for $68 includes a cocktail at the Showgirl Bar as well as a voucher for either Chippendale’s or Zombie Burlesque. Considering the cheapest Chippendales tickets start at $58, it’s a crazy bargain.

For that reason and that reason only — insert my most conspiratorial wink here — put the show on our itinerary. 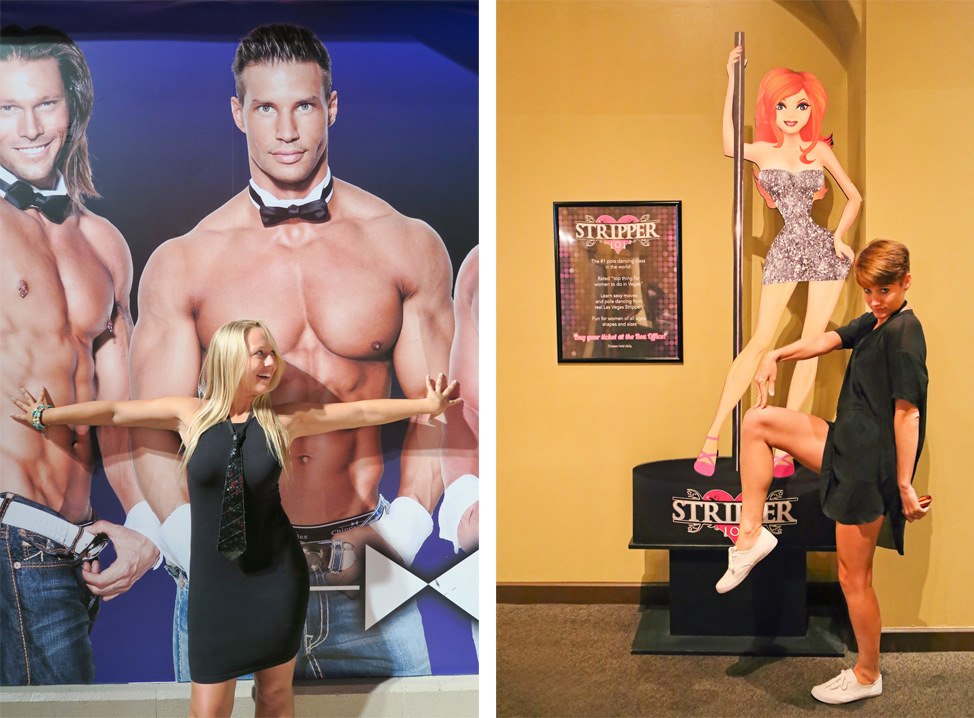 I admit I’ve been intrigued by the whole male revue situation since loyally supporting Channing Tatum’s career by watching both Magic Mike movies on multiple occasions. Would they be fun? Would they be sleazy? Would I storm out and demand a refund upon realizing Channing was not among the perfectly sculpted bodies onstage? Inquiring minds — okay, really just my one own inquiring mind — wanted to know.

We were in the perfect silly frame of mind upon arrival at The Rio. When we handed over our vouchers from Stripper 101 to exchange for tickets, the receptionist kindly asked if we might like to upgrade. Zoe handed her credit card over without hesitation — a boss move that we would not regret. 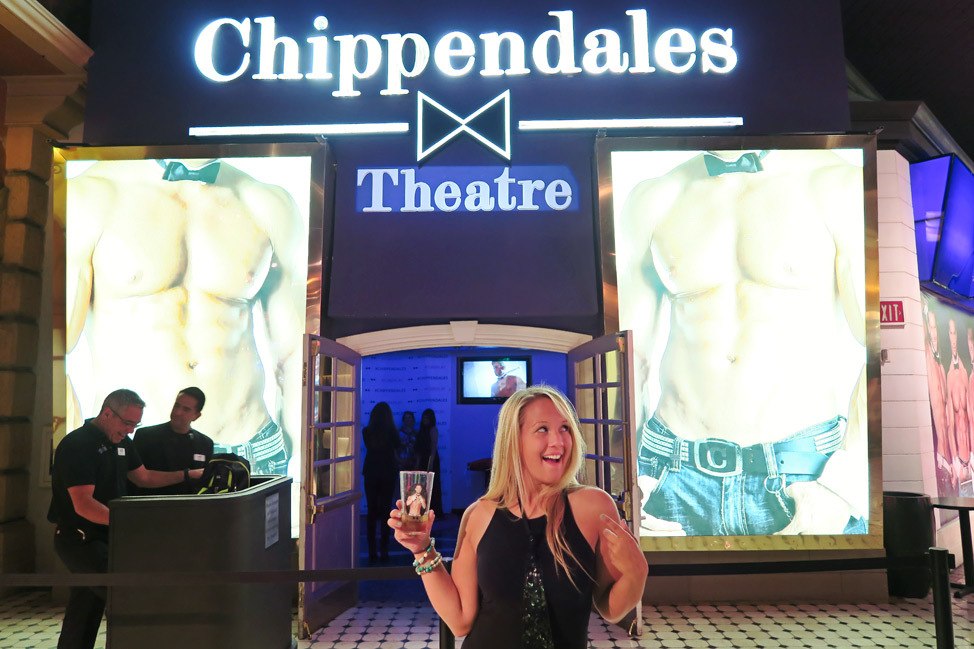 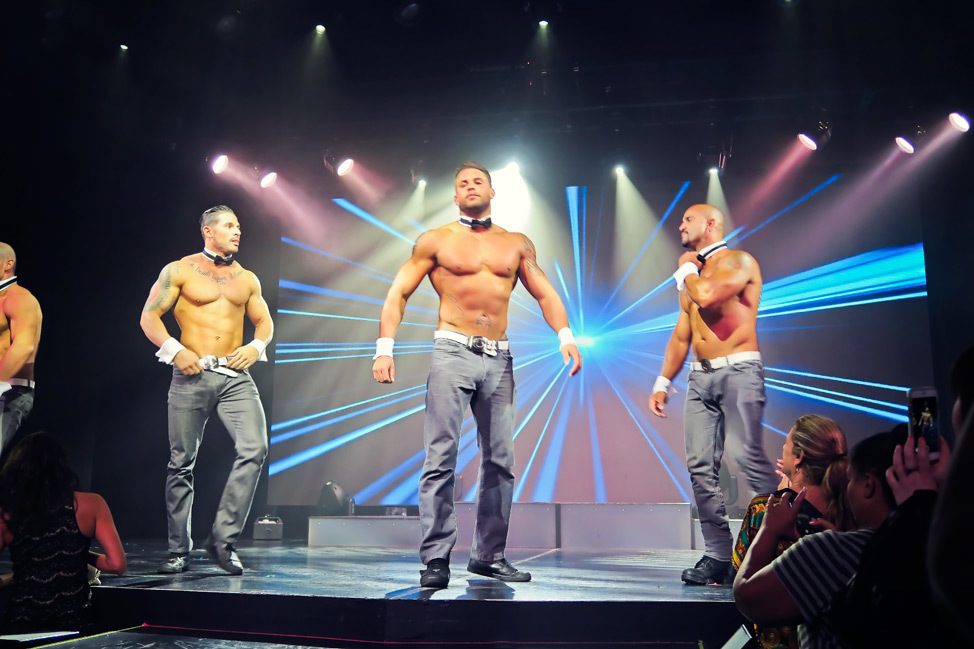 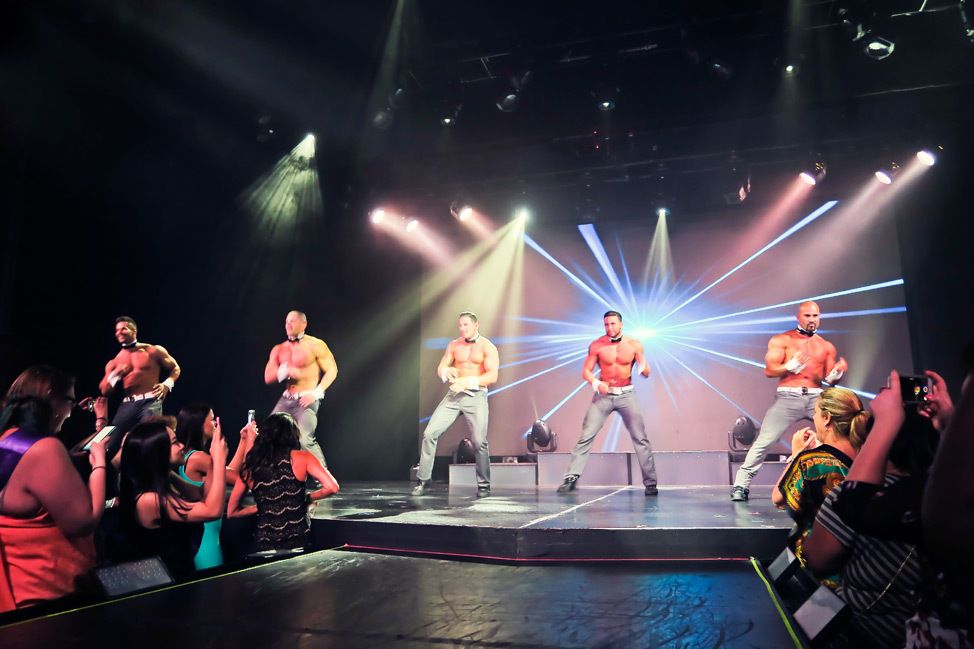 Y’all, I’m sorry to bury the lede here, but this was literally among the most fun seventy-five minutes of my life. Each number was uniquely choreographed and themed and had a surprising amount of effort poured into them, considering they probably could have just put these twelve particular men onstage doing the macarena for six hours straight and it would still draw rave reviews.

We spent the entire show alternating between laugh-screaming while gawking at the stage, laugh-laughing while noting the dumbstruck expressions of some of our fellow audience members, and laugh-crying while catching each others’ eyes and realizing all three of us were loving every single second. We were thrilled with our stage-side seats, even if we did spend a large percentage of the show out of them, dancing along with the boys.

The part I was most impressed with? The perfect balance the whole production struck between silly and sexy, never once crossing the line over to sleazy. Yes, it’s suggestive choreography and men stripping, but the guys actually seem ever-so-slightly bashful on stage — a nice reminder that everyone on and off the stage is in on the joke. The hosts’ banter, the themes of the little skits and the overall attitude of the show is very much of the “every woman is a beautiful goddess who deserves to be treated like a queen” variety, and let me assure you that it was a hit with the very diverse, multi-generational audience. The guys showed no favoritism towards cute young things, and instead spread their attention (including pulling a few lucky ladies onstage) very diplomatically. At one point, they gave a rose to the septuagenarian in the audience who had been married for fifty years — I wouldn’t be opposed to taking my ex-nun of a godmother Mary Jane, if we ever found ourselves together in Vegas. When I later read the entire show was designed for women by women, I wasn’t surprised in the slightest. 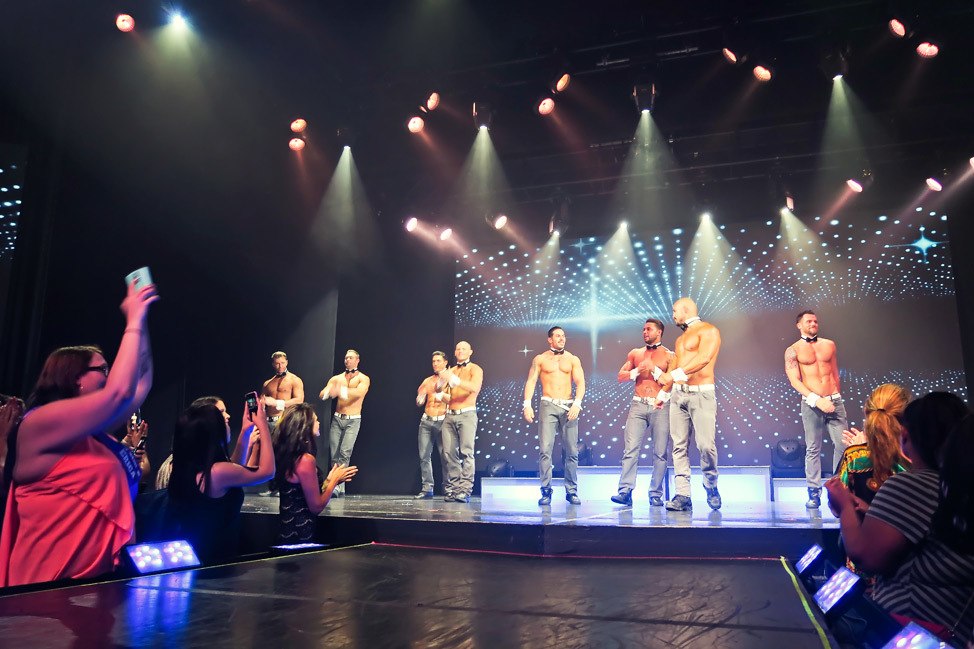 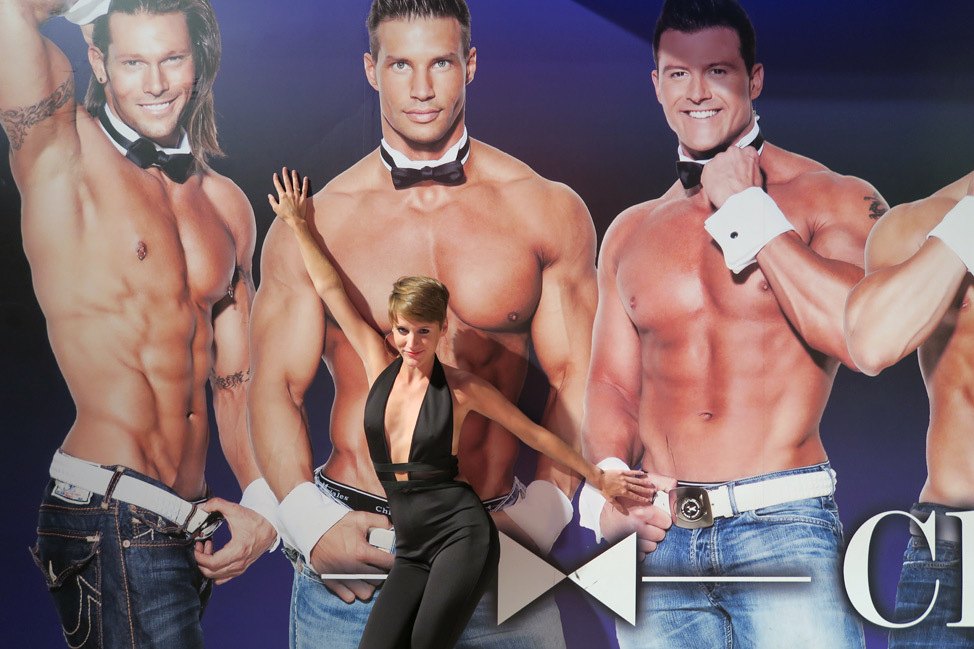 There are shows nightly at 8:30, with additional 10:30pm shows on Fridays and Saturdays. Tickets range from $58-99, and you will likely shell out more upon arrival. I paid $20 for a seat upgrade, $15 for a drink, and $20 for a souvenir photo with the guys (cameras were only allowed for a short designated segment at the end of the show otherwise.) Each and every dollar was an investment in the hardest I laughed in all of 2015, so clearly it was money well spent.

One important thing to note — we were super pumped to to hang with the guys after the show in the Flirt Lounge as heavily advertised, but we didn’t realize that if you go to the 8:30pm show on a weekend like we did, the guys are busy getting ready for a second round and don’t have time for a drink with their fans. Thankfully, we did have that one beautiful moment together when we snapped our souvenir photo. But seriously, if you’re excited to meet the guys after, be sure to book the last performance of the night on Fridays and Saturdays. 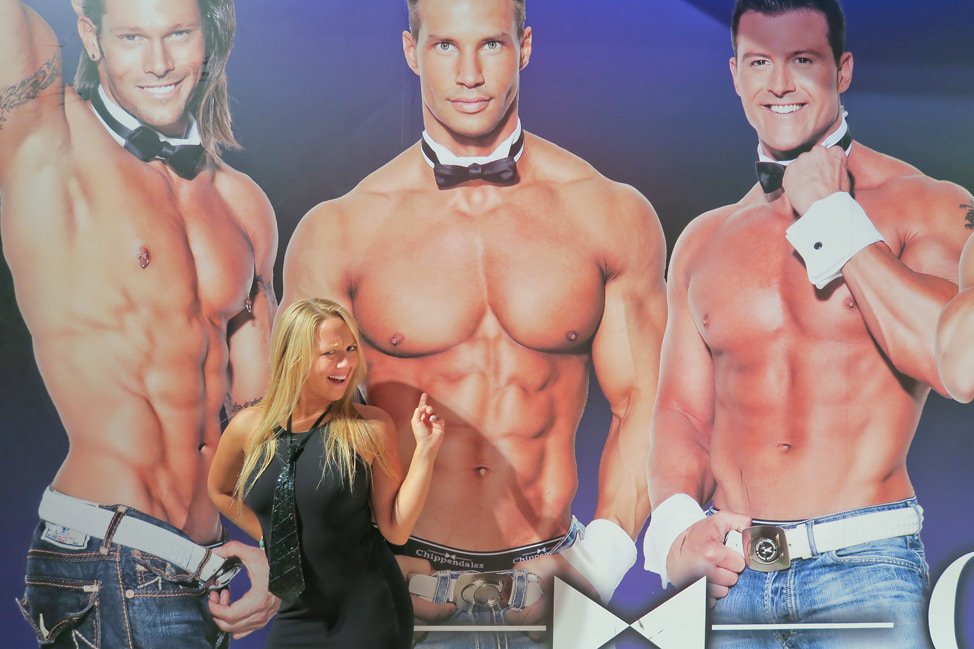 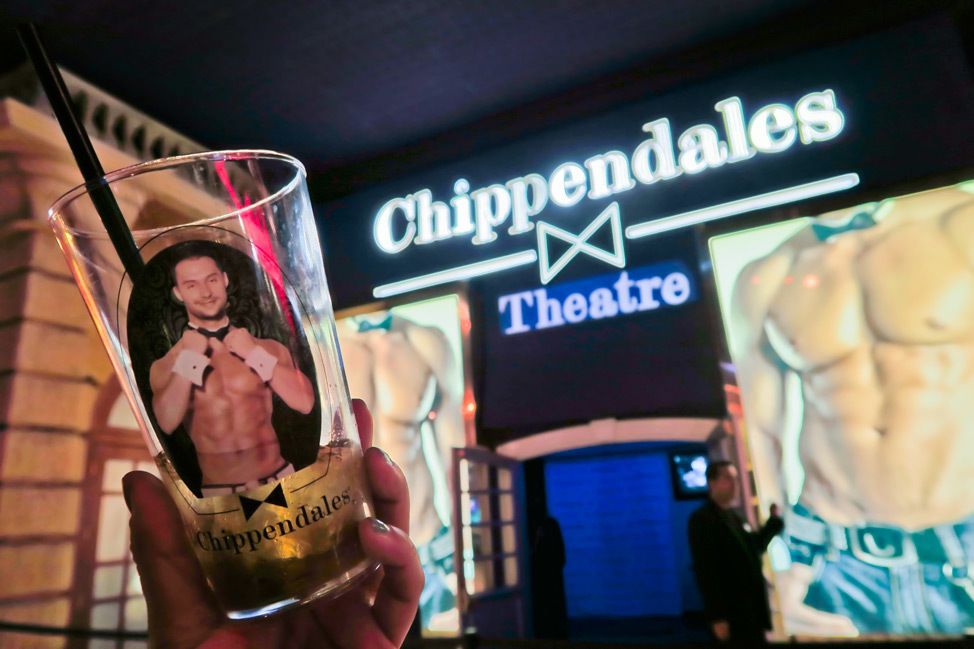 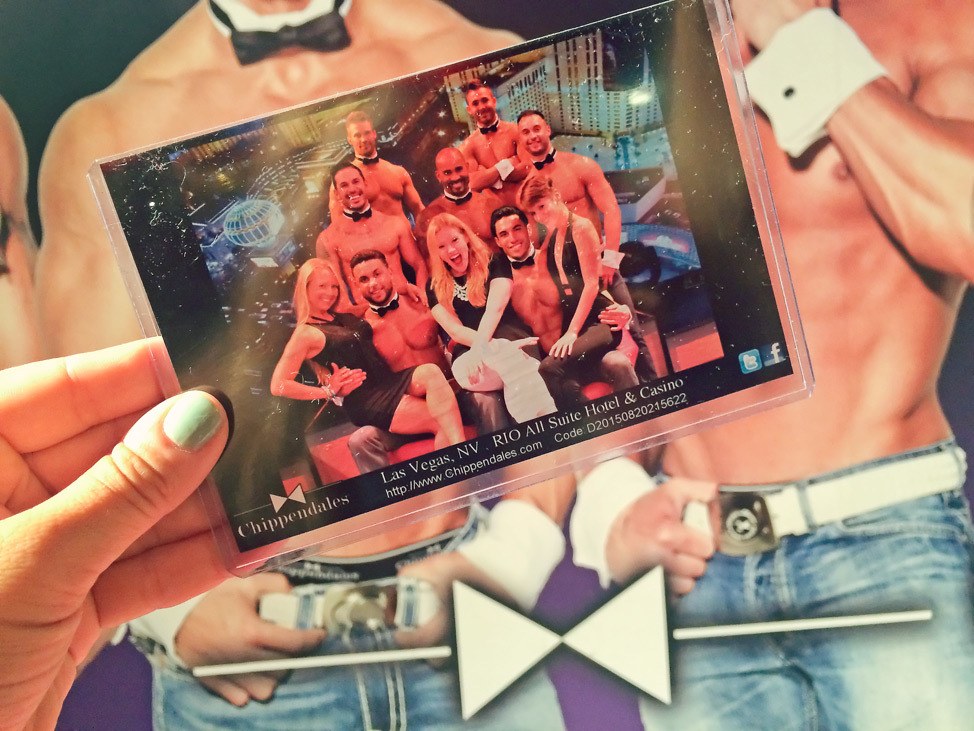 Post-show, when we were able to stand up straight from our doubled-over laughing position and drag ourselves away from all the hilarious photo-ops available outside the theater, we headed to The Palms. While we could have stayed right in The Rio and redeemed our ticket stub for free admission to the onsite Voodoo Lounge club prior to 11pm, with The Palms right there in walking distance it seemed crazy not to head up to Ghostbar for a drink over one of the best views in Vegas. 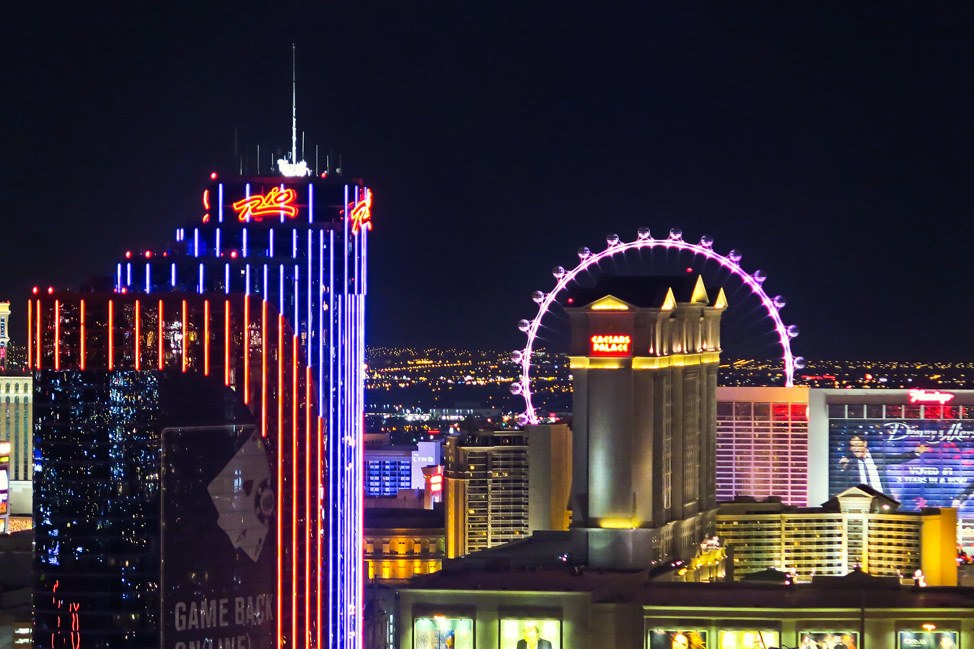 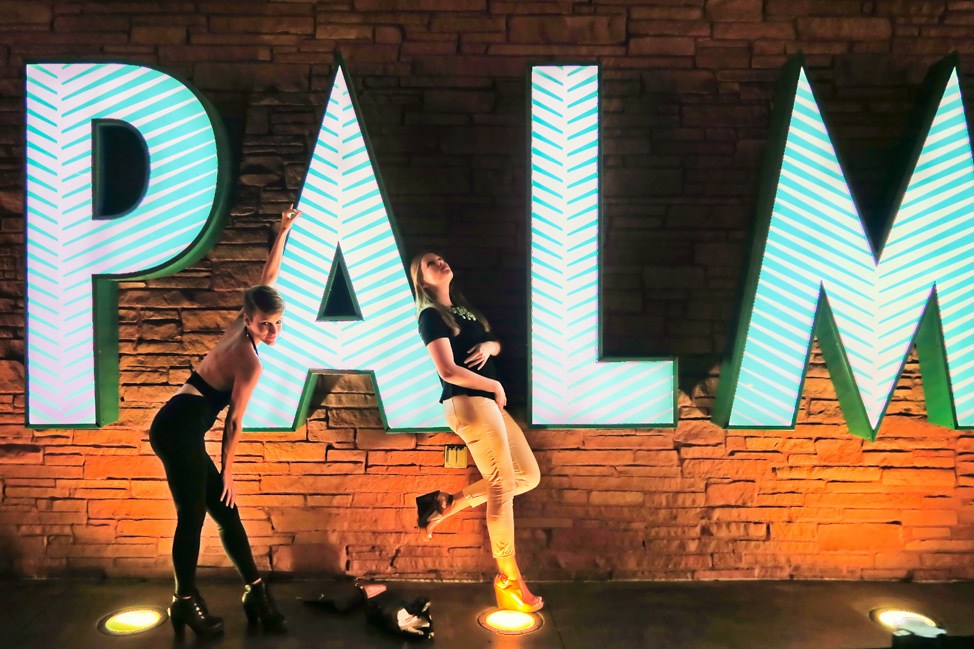 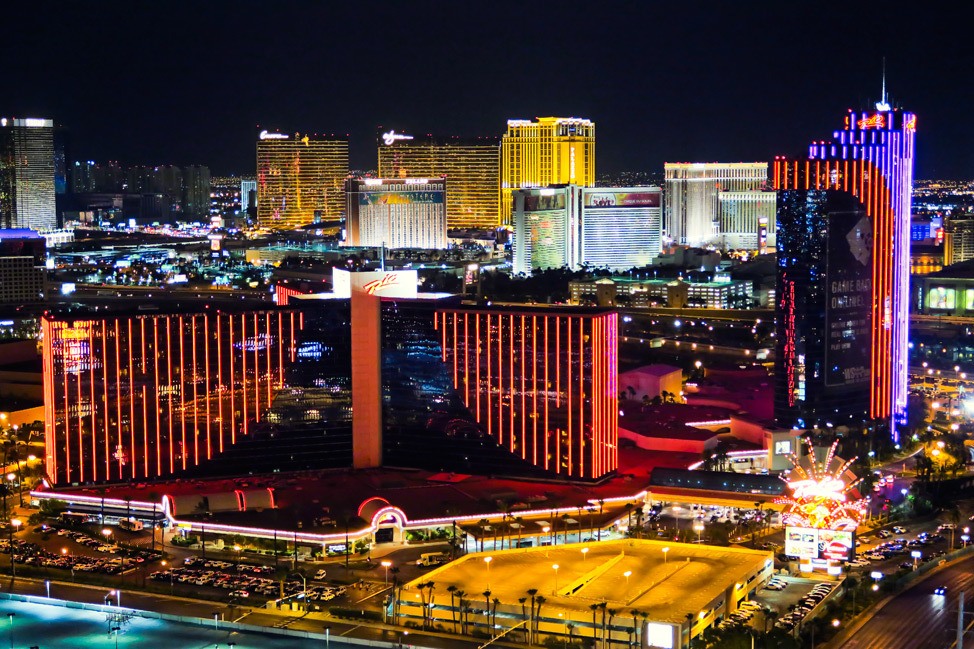 Later, we piled in a cab up to Tryst at The Wynn, for no particular reason other than I can’t seem to not when I’m in Vegas. And good thing I did, as I later learned it was my last hurrah there — the club closed its doors for good in October after a ten year run on The Strip. 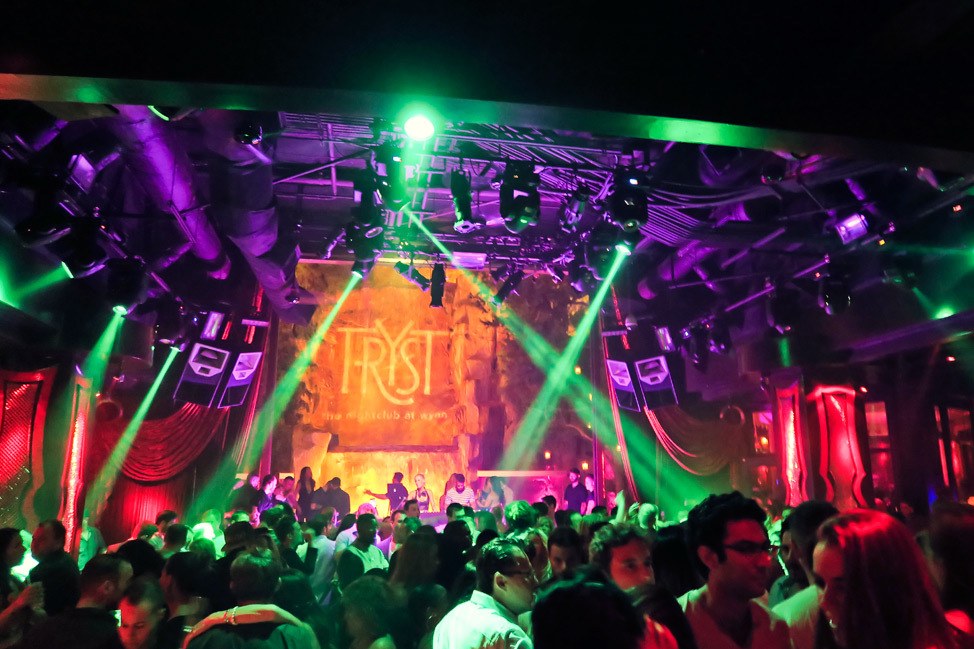 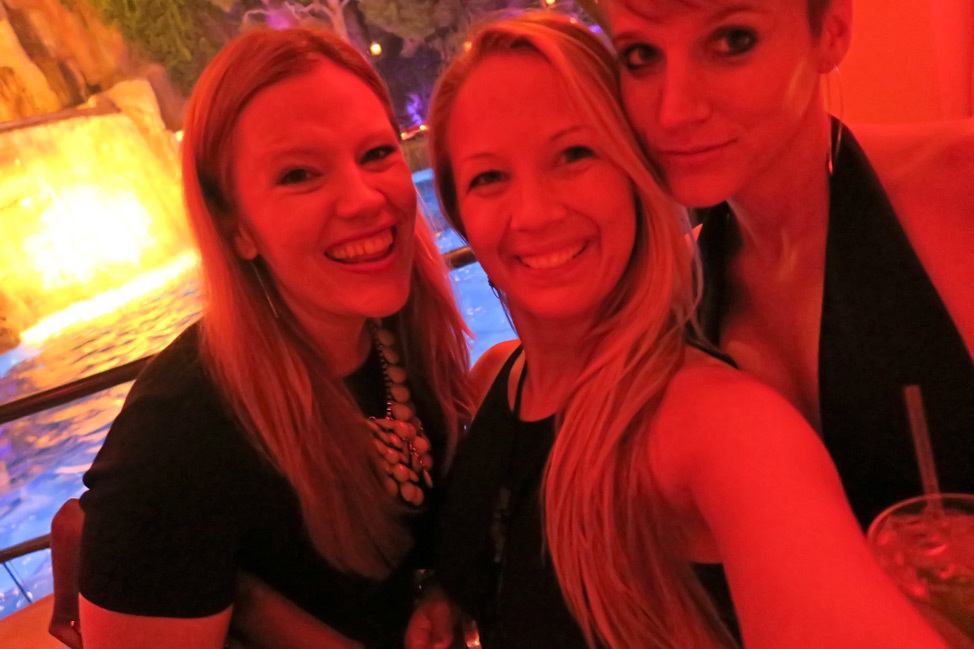 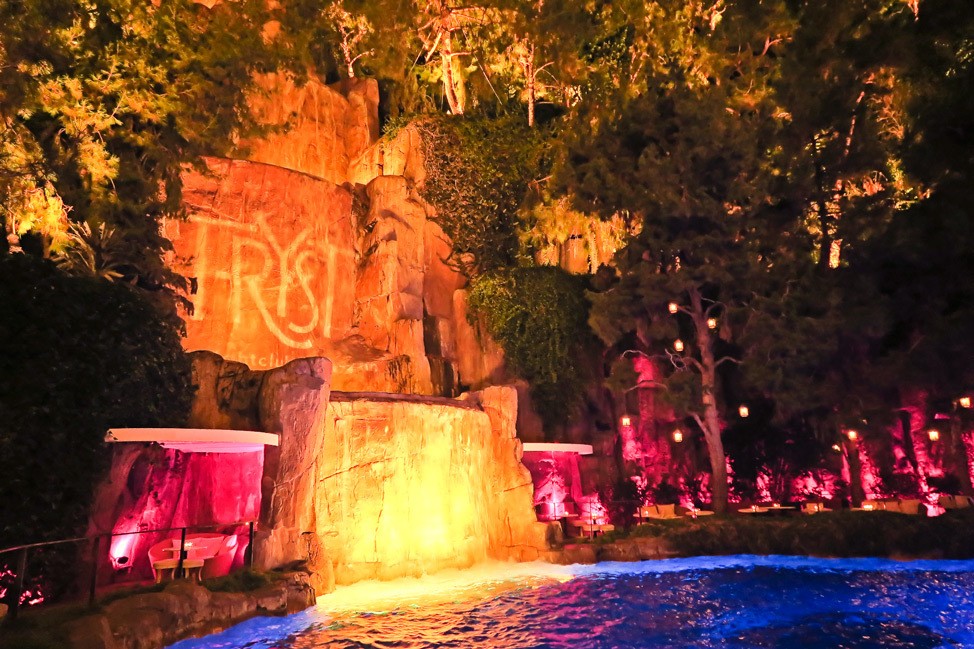 We had a blast. In fact, we had such a good time we looked up ticket prices to take another friend of mine, who arrived later in the weekend, back to do the whole day over again over the weekend! Chippendales was legitimately one of the most hilarious and fun experiences I’ve ever had in Vegas, and at only $10 more to tack on a Stripper 101 class and learn a few mover of your own… why not?

When in Vegas, right?

Ladies, (or gents!) would you take a pole fitness class or check out a male revue?

.
I am a member of the Viator Ambassador initiative and participated in Stripper 101 as part of that program.

Brooklyn in Bloom: A Trip to NYC in April

How To Spend the Perfect Long Weekend in Miami

Inside My Bag: Las Vegas

Photo of the Week 243: Bangkok and Koh Tao Stranded at The Strip’s First Boutique Hotel: The Cromwell Las Vegas
57 Comments...