There is nothing I love more than discovering an offbeat and quirky surprise in a city I love. Take New York City: forget the MOMA, I’d rather to go to MoSex! So you can’t imagine how excited I was when, while cruising through Bangkok’s Siam district, I spotted a seashell museum out the window. 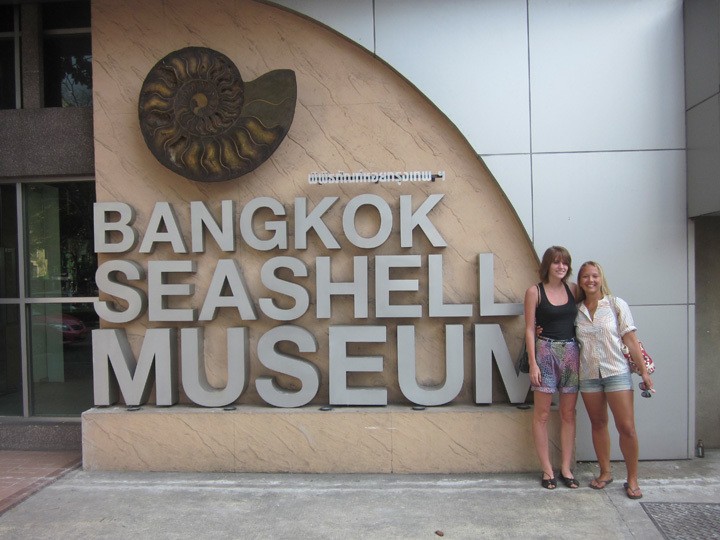 Did you know such a thing existed, anywhere in the world? I didn’t! Lucky for me my friends Zoe and Tom were willing to detour our day for a bit of spontaneous undersea adventure. Even more luckily for me, Tom went to high school in Bangkok and speaks great Thai, therefore managing to wrangle us a great discount on 200 baht admission fee. 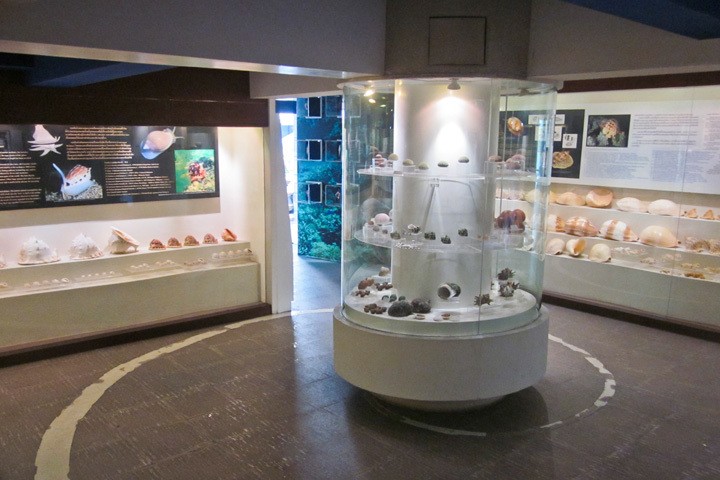 As soon as we entered I was struck by how modern and well designed the museum was. I guess I was expecting a dusty old shell-hoarder’s basement? But no, the 3,000 specimens of more than 600 species that live here are housed in a way that would make any design nerd’s heart swell. 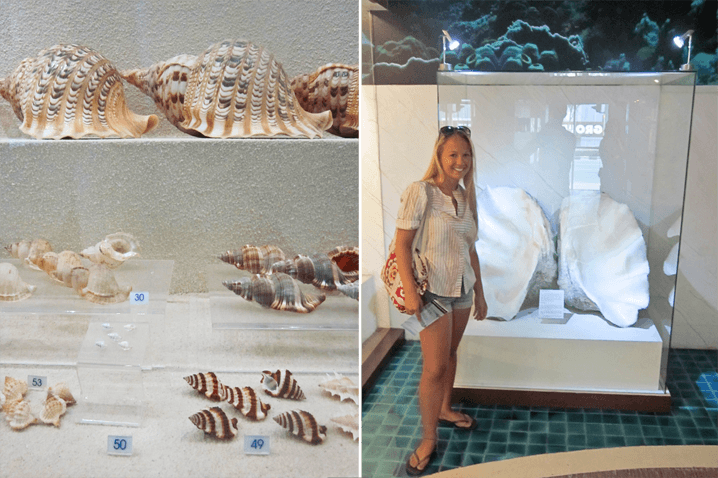 In fact, I was often torn between what to admire first. The alien-like, color-bursting, pattern-happy shells? 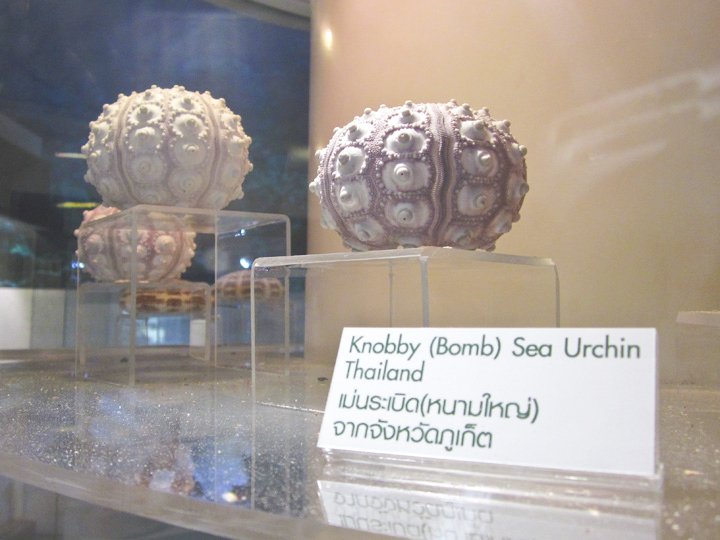 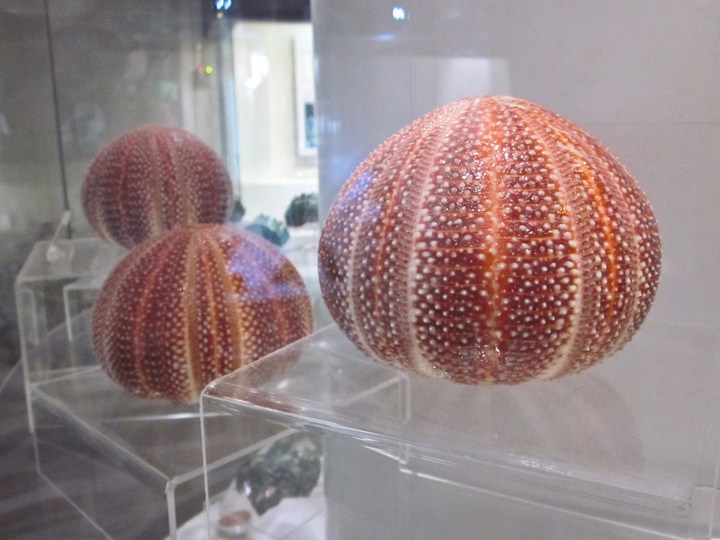 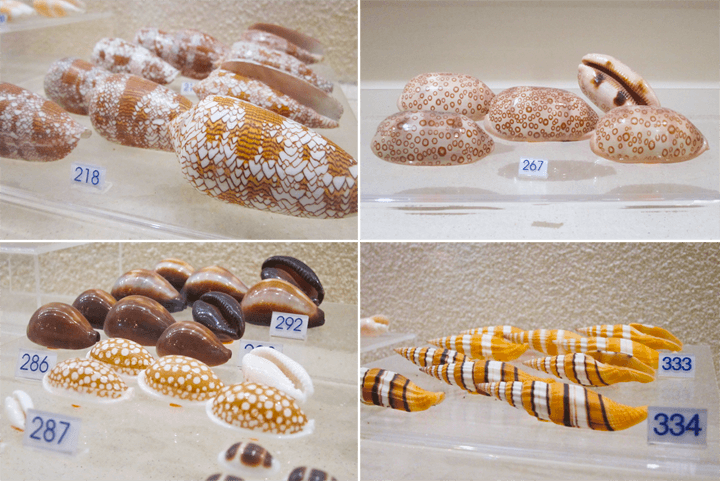 Or the quirky, creative, and fun ways in which the museum displayed them? 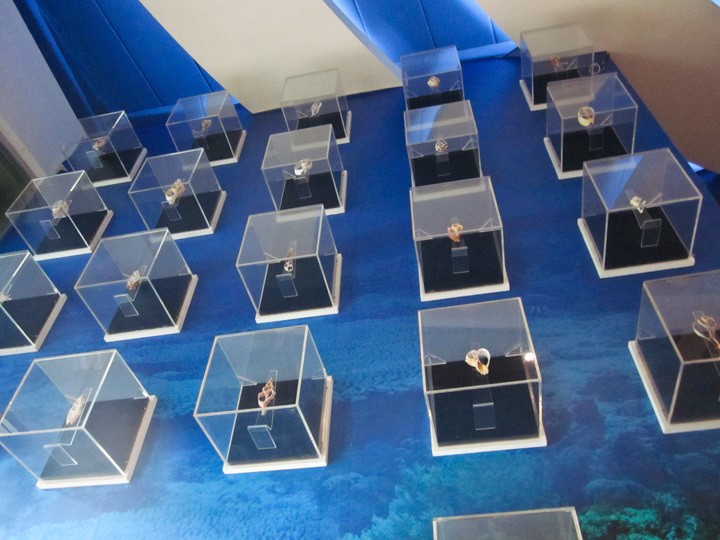 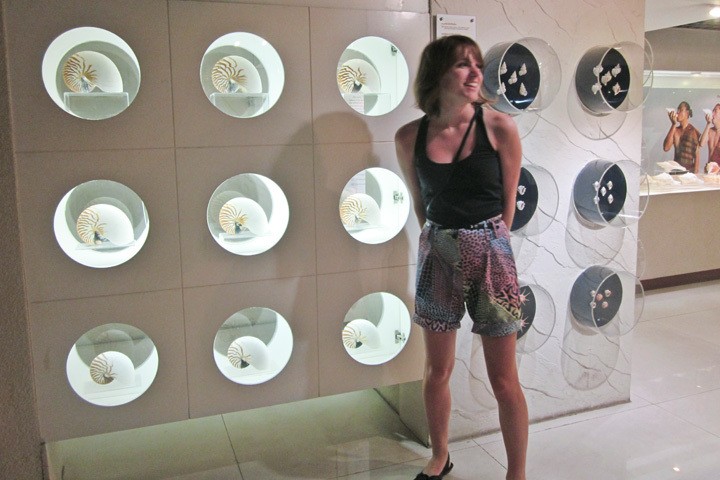 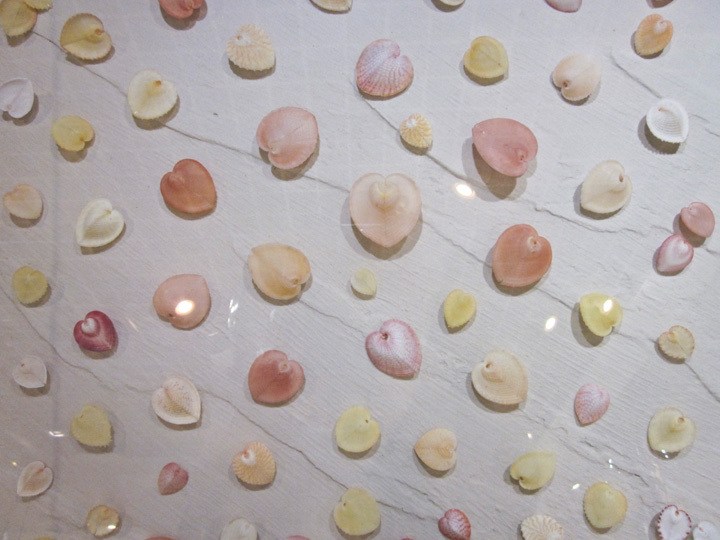 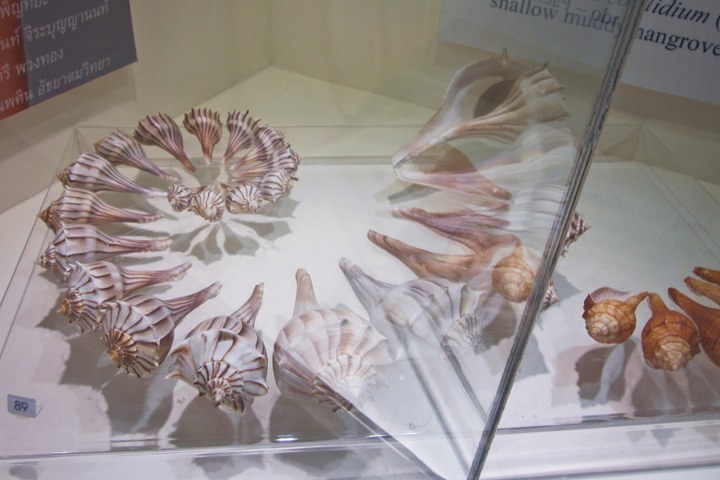 The museum was more than just a feast for the eyes, though. Informative displays in both Thai and English explained amazing stories about different varieties of shells, like these conch that are turned into a kind of musical instrument/spiritual symbol used in ceremonies in French Polynesia. You can see how the shell goes from its natural state at bottom right to a more polished and gleaming version at left. 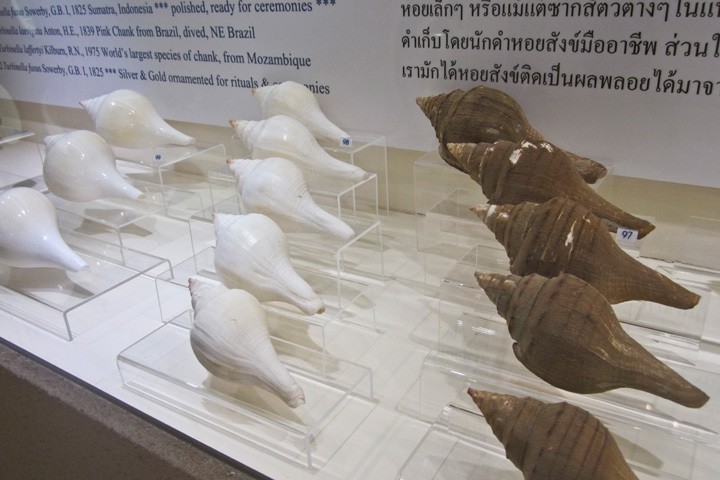 Eventually, that same brown shell you see above becomes the work of art you see below. 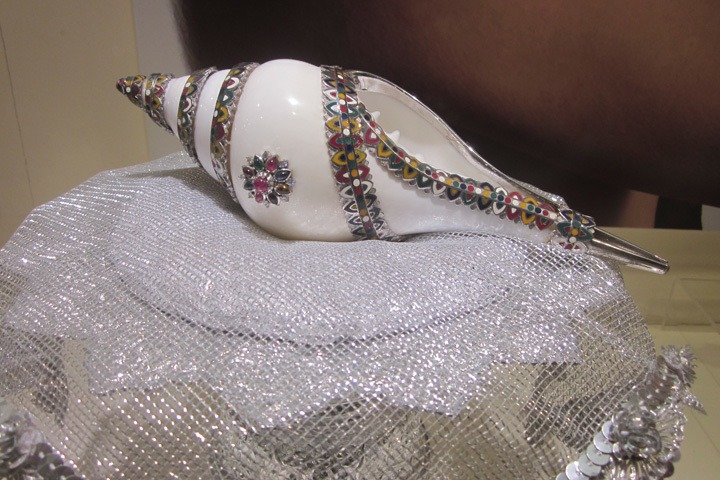 Another display was about the fascinating phenomenon of Carrier Shells, which covered, or “self-decorated,” with other shells, coral pieces, stones, etc. The shells are attached dead, though according to the display, there is an account of a live kitten’s paw being attached at an aquarium!

We even spotted a pretty hilarious cultural oddity on one beautiful poster about freshwater gastropods. See it, at bottom left? 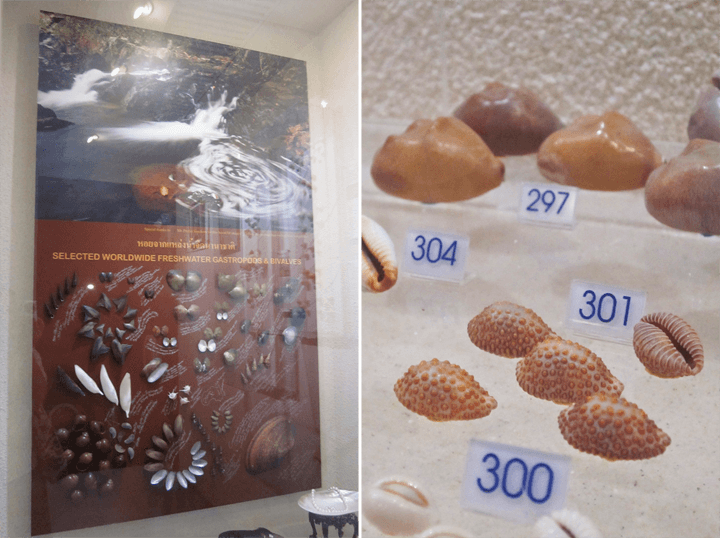 We looked a little closer, and couldn’t contain our laughter when we saw the tiny smily face (^_^) on an otherwise very professional display. Oh, Asia, I love you. 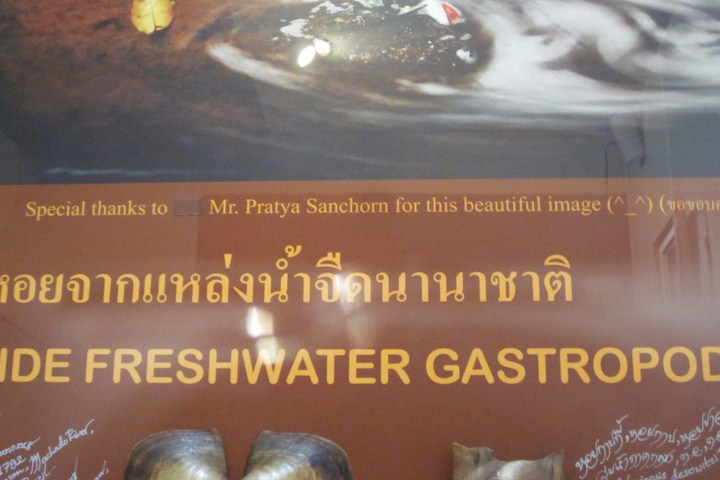 And actually, the funny signs didn’t end there. I nearly died when I went to the bathroom and found these printouts taped to each door. 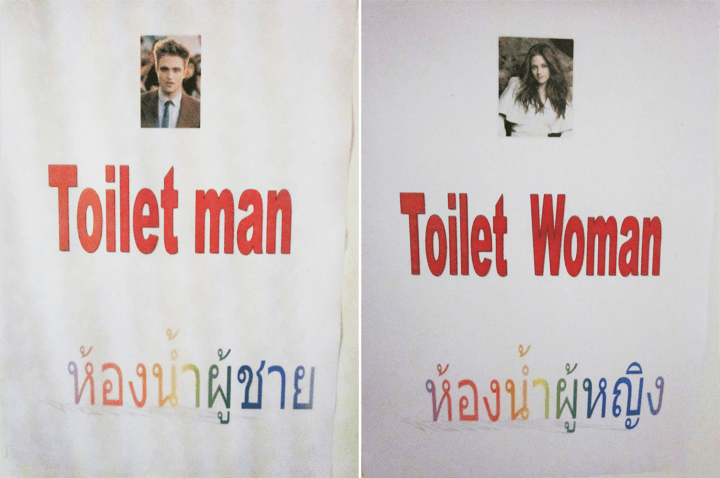 Hilarious signage aside, this museum is a true hidden jem in Bangkok. I’ve never seen it in a single guidebook or mentioned on any blog. And it’s amazing! And I don’t think it’s just my diving that made me so in love with the place. Zoe and Tom (who granted, have tried diving now too) were also totally enthralled. If you love the oceans, love good design, simply can’t look at another temple, or are just in need of a good dose of the bizarre, come check out my new Bangkok find. 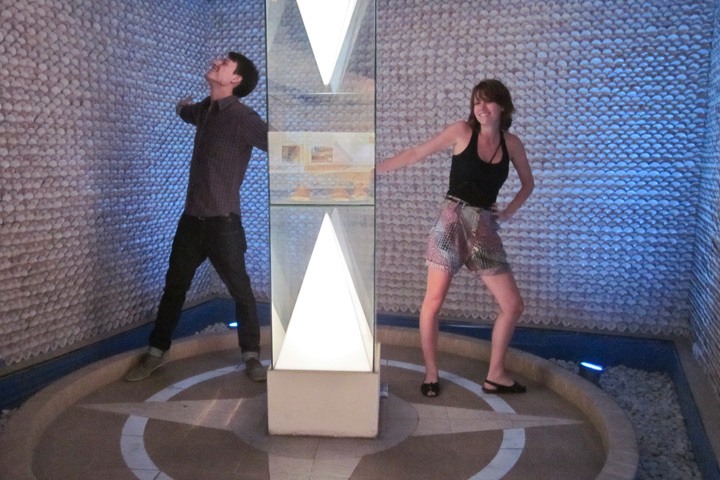 The Bangkok Seashell Museum is short walk from the Surasak sky train station, at the corner of Silom 23 near Leardsin Hospital. They are open everyday from 10am-8pm. Call 022340291 for more details. 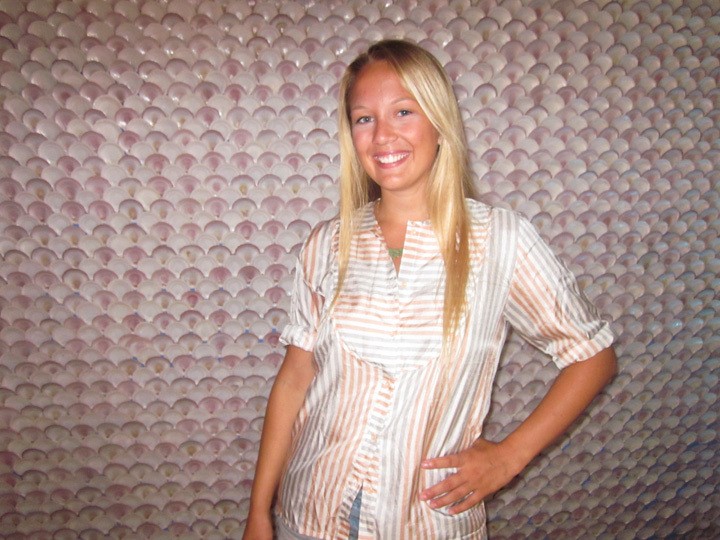