Tips for Greening Your Burn

I’ve heard the phrase, “the playa gives you the burn you need, not the burn you want.” Over the past several years I’ve been inching closer and closer towards the goal of a sustainable life. Perhaps the challenges my camp presented me with were a gift, in a way – a reminder that this is an issue I care about, and a push to find a way to have those uncomfortable conversations both in person and here on my blog.

Burning Man is defined by its ten principles, and the founders are not shy about calling “leave no trace” the most important principle of all. I’ve poured a lot of time and a lot of love into creating this list of tips and resources — from easy-enough-for-anyone to damn-you’re-dedicated for how to green your burn. Some I’ve personally tried and tested, others I look forward to exploring for future burns. Green on, friends! 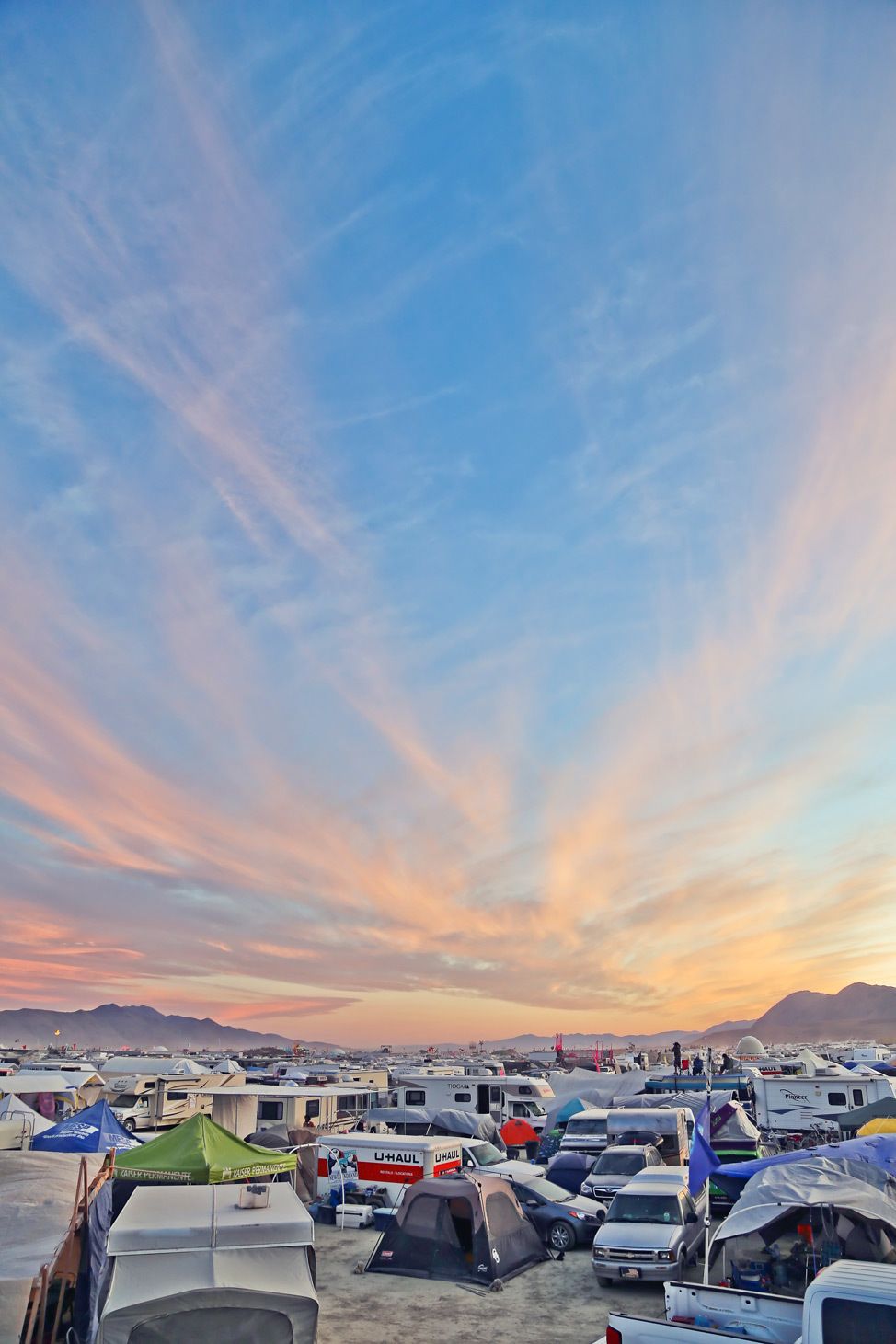 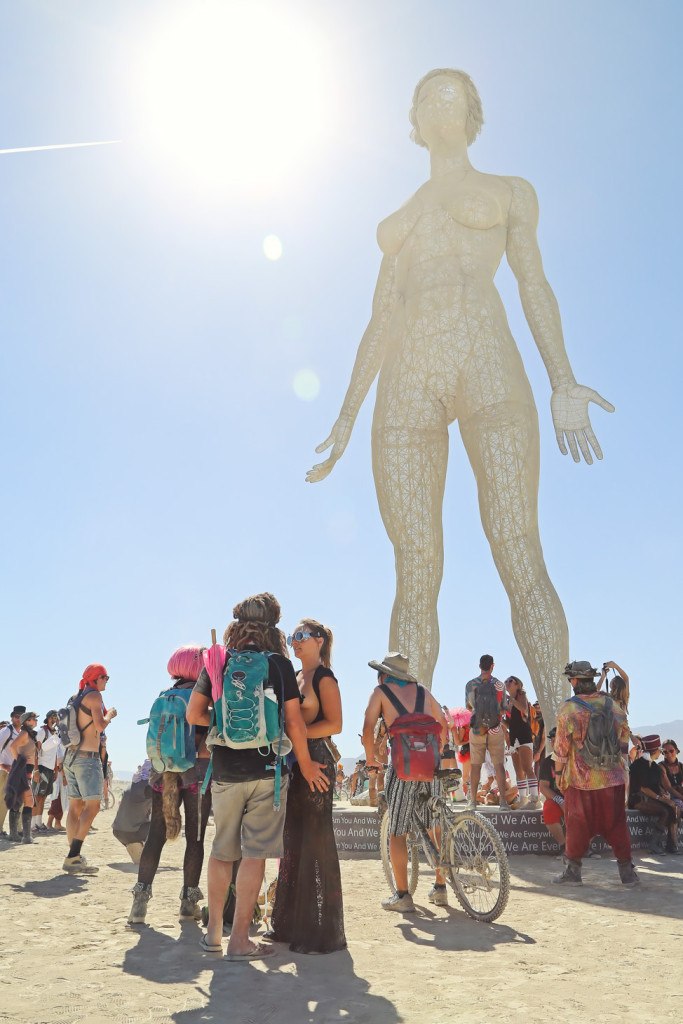 • Recycle cans in Black Rock City: Bring a large mesh laundry bag to the playa for your crushed aluminum cans. (The mesh will allow any liquid in the cans to dry out and can be washed and reused again, as opposed to plastic garbage bags.) Before Friday at 5pm, take them to Recycle Camp, where they’ll be packed for delivery to the Gerlach School, who reaps the rewards of the can deposits. Last year Recycle Camp donated $1500 worth of cans — a whole lot of cash to a small town school. Learn more here! Aluminum is America’s most recycled packaging solution — and for good reason. A few interesting facts about aluminum recycling:

* Tossing away an aluminum can wastes as much energy as pouring out half of that can’s volume of gasoline.

* Recycling one aluminum can saves enough energy to keep a 100-watt bulb burning for almost four hours or run your television for three hours.

* Twenty recycled cans can be made with the energy needed to produce one can using virgin ore! 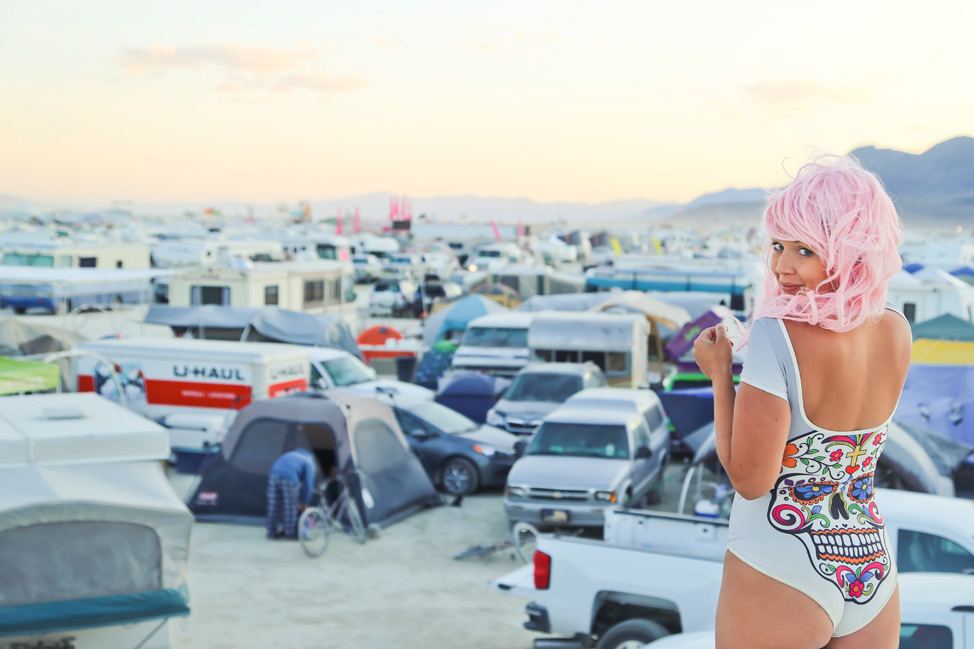 • Recycle wood in Black Rock City: One of the beautiful things about Burning Man is the creativity and ingenuity put into creating temporary structures and shelters for various camps. But what to do with the materials when you’re done? Hopefully, some can be reused for future projects. Ideally, the rest can be recycled at Burners Without Borders. On the final Sunday and Monday of the burn, take all usable lumber and building materials to designated recycling stations — and stick around to help them organize and sort donations if you have a bit of time, too. Learn more here. 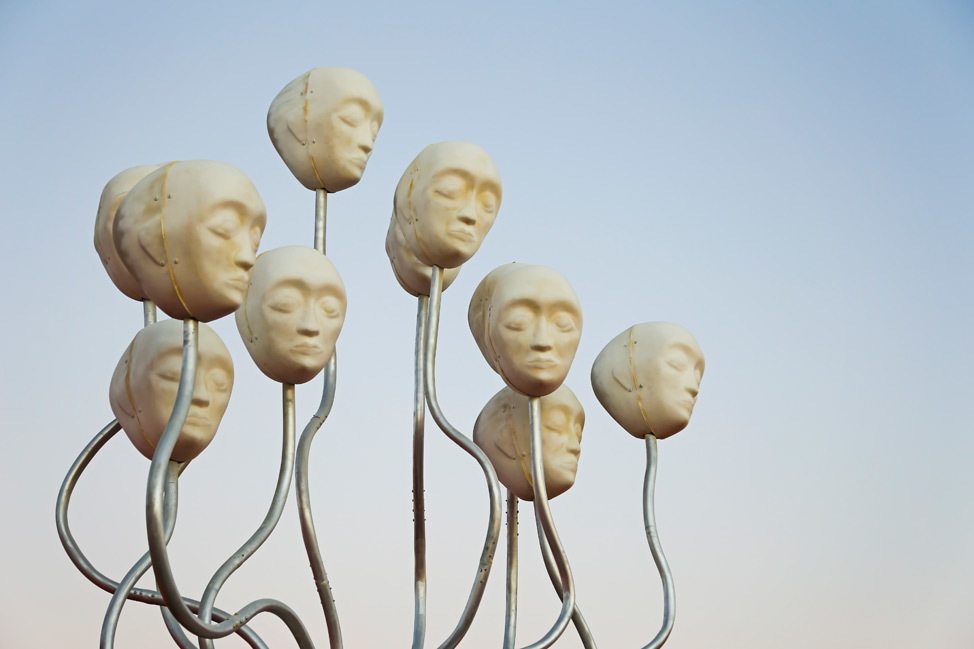 • Everything else, recycle on the way home: Check the Exodus Trash & Recycling Network prior to leaving home for a list of designated recycle stations on the way out of Black Rock City. The listed locations hypothetically provide free recycling for plastics, glass, metals, paper, cardboard, plastic bags, batteries, non-perishable food and water, and even bicycles. Trash can be dumped for $5 per 35 gallon bag. Recyclables must be clean and sorted. The proceeds from recyclables go to Black Rock Solar, Whole Kids Foundation, and other community programs in the region while food and water go to Food Banks.

This is an imperfect system. In 2015, we went to one promised recycling location and found an empty parking lot. We persevered and found luck at the second, though they were not accepting glass recyclables and tossed ours in the trash. Still, it’s worth the effort. Nevada does not have can and bottle redemption centers that burners from California, Connecticut, Delaware, Hawaii, Iowa, Maine, Massachusetts, Michigan, New York, Oregon, and Vermont might be used to from home. 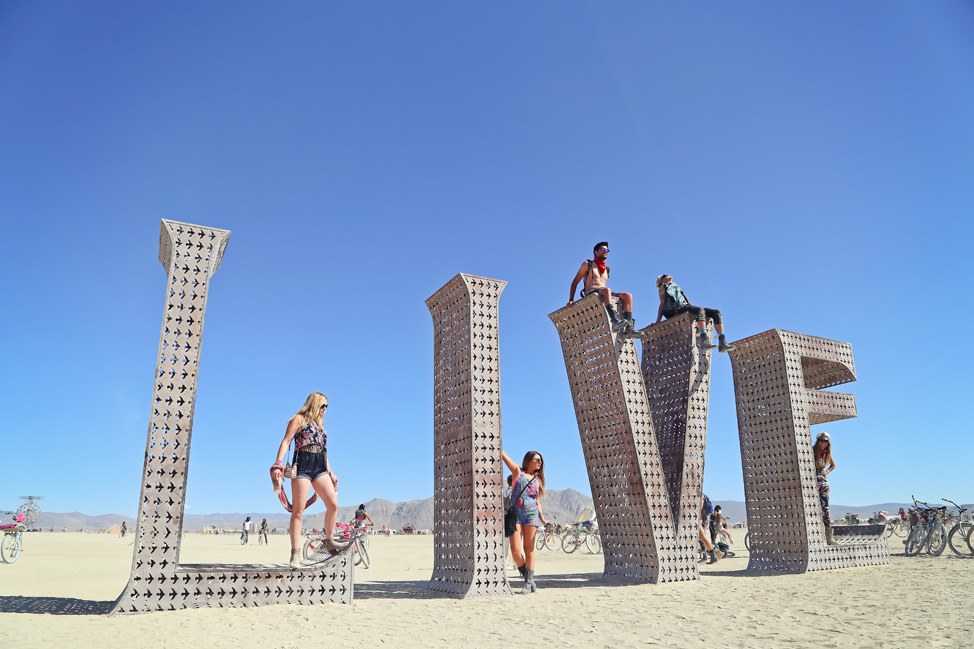 • Don’t ditch your bike: I get it — the bike you brought to the playa looks trashed. But don’t ditch it! Tossing it on the playa is just plain rude and means someone else will be picking it up for you. Tossing it after you hit the highway is wasteful. Ideally, if you drive to and from Burning Man, you’ll have a dedicated bike that you bring back year after year.

If, like me, you fly in, I recommend buying a second-hand bike off Craigslist leading up to the burn, and immediately relisting it when you have phone service upon hitting the highway on the out of the burn. Not only does this offset the cost of your original purchase (in 2013 I bought mine for $65 and sold it for $15, making the cost of a weekly “rental” just $50), it also helps get your bike in the home of a new burner next year and provides a nice income for enterprising individuals who clean, repair, and store the bikes every year until they hand them off again for the next burn. If you don’t think your particular bike is worth anything after the Black Rock beating you gave it, post it on Craiglist anyway for free — someone might be able to salvage a few parts.

On a related note, write down your bike lock combination somewhere safe. Having to buy a new one every year because you forgot the combination is the definition of unsustainability. (I know, because I did it myself — argh.) 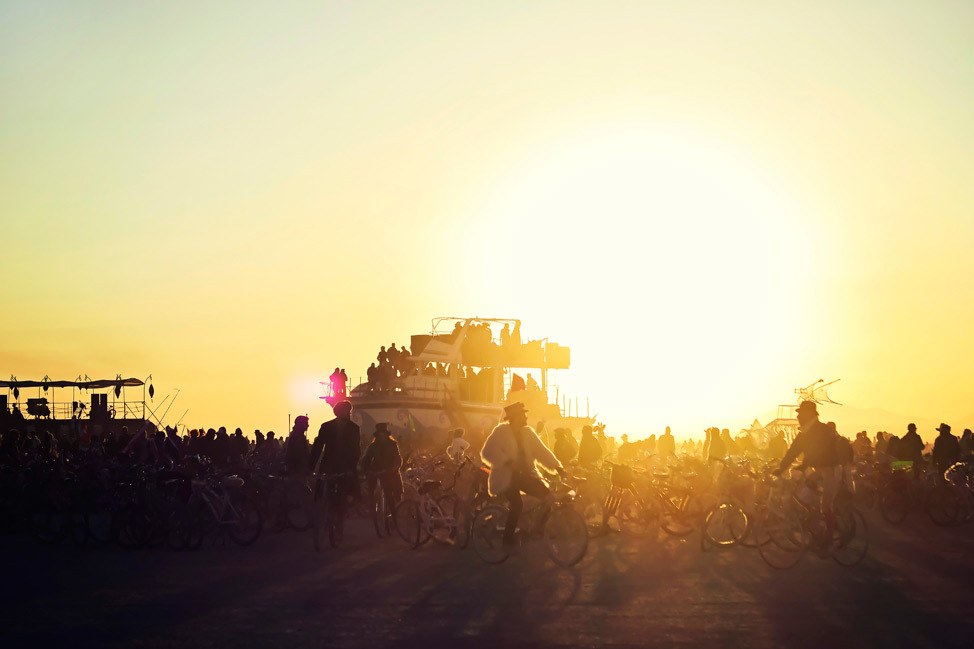 • Shop and pack smart: Any burner who has spent more than ten minutes in Reno Wal-Mart in the days before the gates open notes the irony of rampant consumerism to prepare for a decommodification festival. Does your aunt have a tent in the garage you can give a new life to? Is there a thrift store you can pick up a few essentials from? Do you really need the third tutu? Try to shop sensibly by making an organized list of the stuff you already have and the stuff you really need before stepping foot into any area that accepts credit cards. Put your name on everything and do your best to keep track of your playa essentials in the dust — avoid rebuying the same crap year after year. 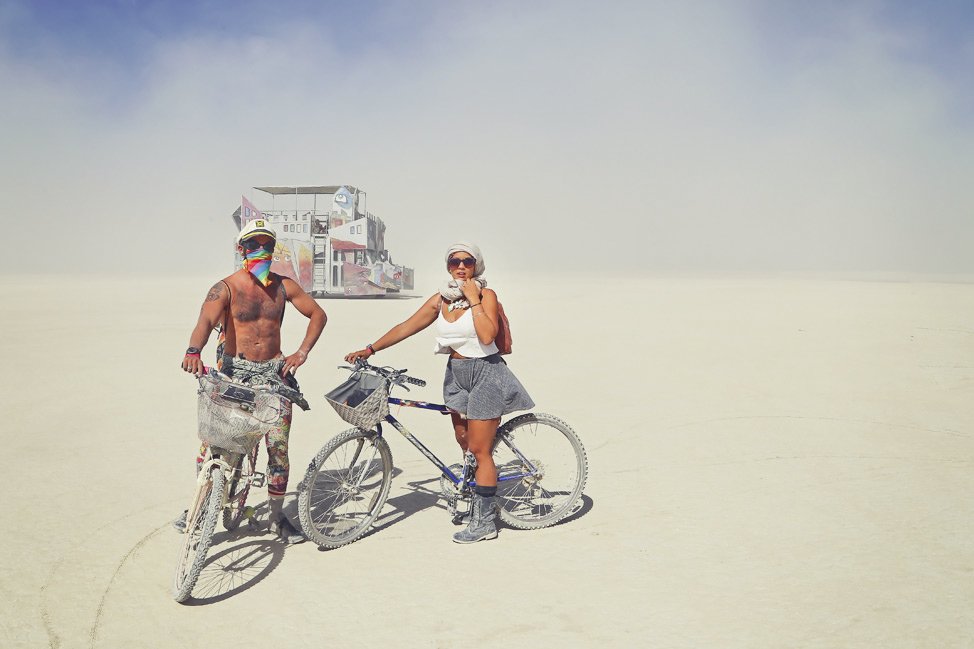 • Carry in, carry out: Burning Man is a leave no trace event, and there’s no garbage service hauling your trash home for ya. Requiring burners to manage their own moop and other garbage helps bring awareness about their environmental impact of our waste and creates incentive to reduce waste trash and disposables brought out to Black Rock City. One word new burners will hear a lot is moop, which stands for “matter out of place” and refers to anything that wasn’t already in the pristine desert when Burning Man first found it.

The process starts at home. Shed excess packaging immediately after purchase to cut down on the amount of trash you need to carry out of the burn. Put eggs in mason jars, shell-free and ready to scramble. Freeze everything you can freeze to act as ice on the drive out — one less plastic bag to buy and pack back out. Ideally, pack reusable dishes and flatware. If you must use disposables, go for biodegradable or compostable options as opposed to materials like styrofoam (did you know styrofoam makes up up 30 percent of landfills and is one of the world’s least environmentally-friendly materials?) and single-use plastics. Straws aren’t a huge issue on the playa that I’ve personally observed, but you could pack a steel straw just in case. I travel with one in my purse everywhere I go, and am considering bulk purchasing some as gifts for a future burn. Avoid single use plastic water bottles and instead purchase one gallon water jugs, which can be decanted into individual Camelbak and mugs, and later recycled.

Burning Man takes the leave no trace thing seriously — your grade on the moop map can affect your camp’s placement for future burns, and for good reason. The overall event’s success at passing the Bureau of Land Management’s Debris Inspection is critical to being issued the following year’s event permits. 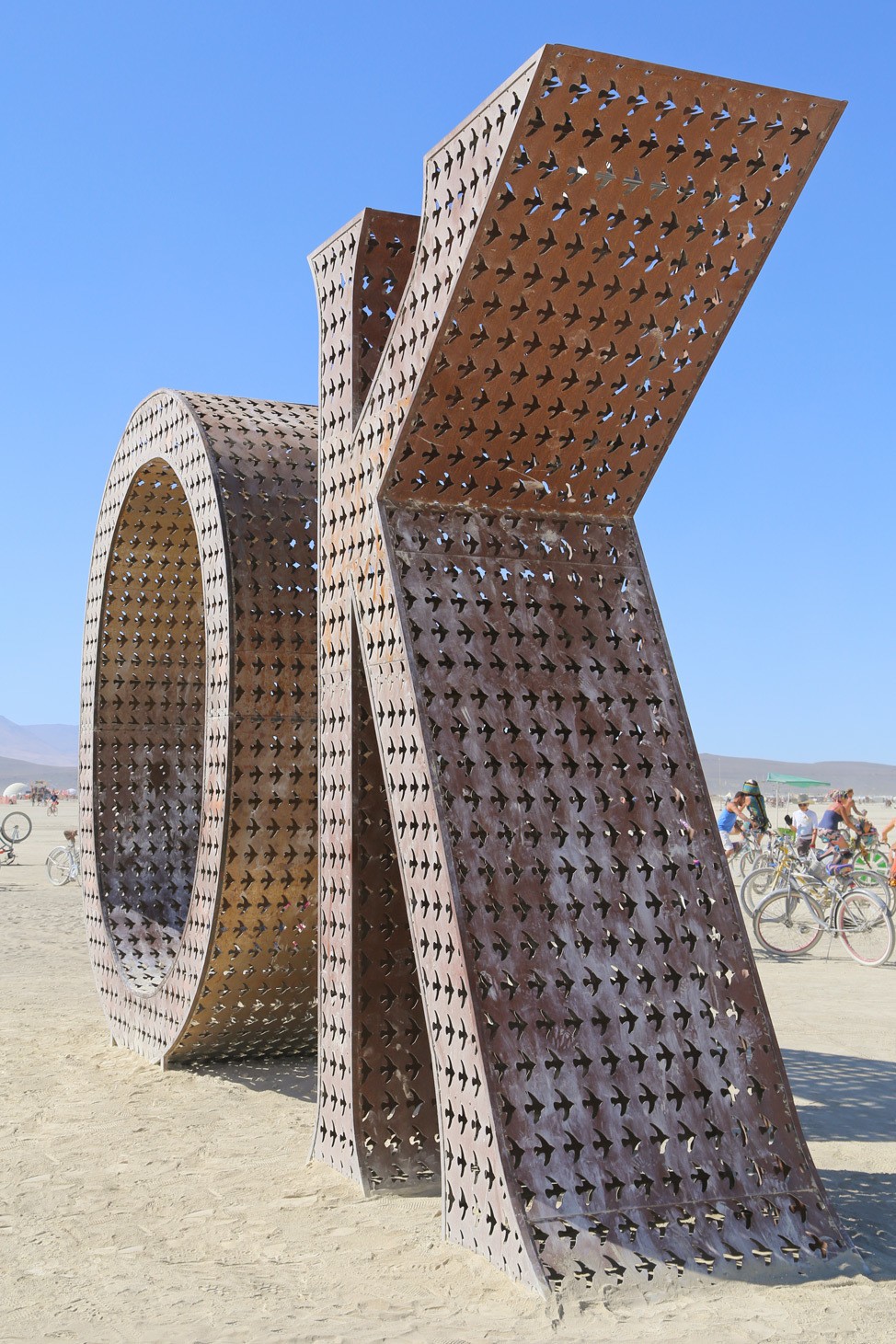 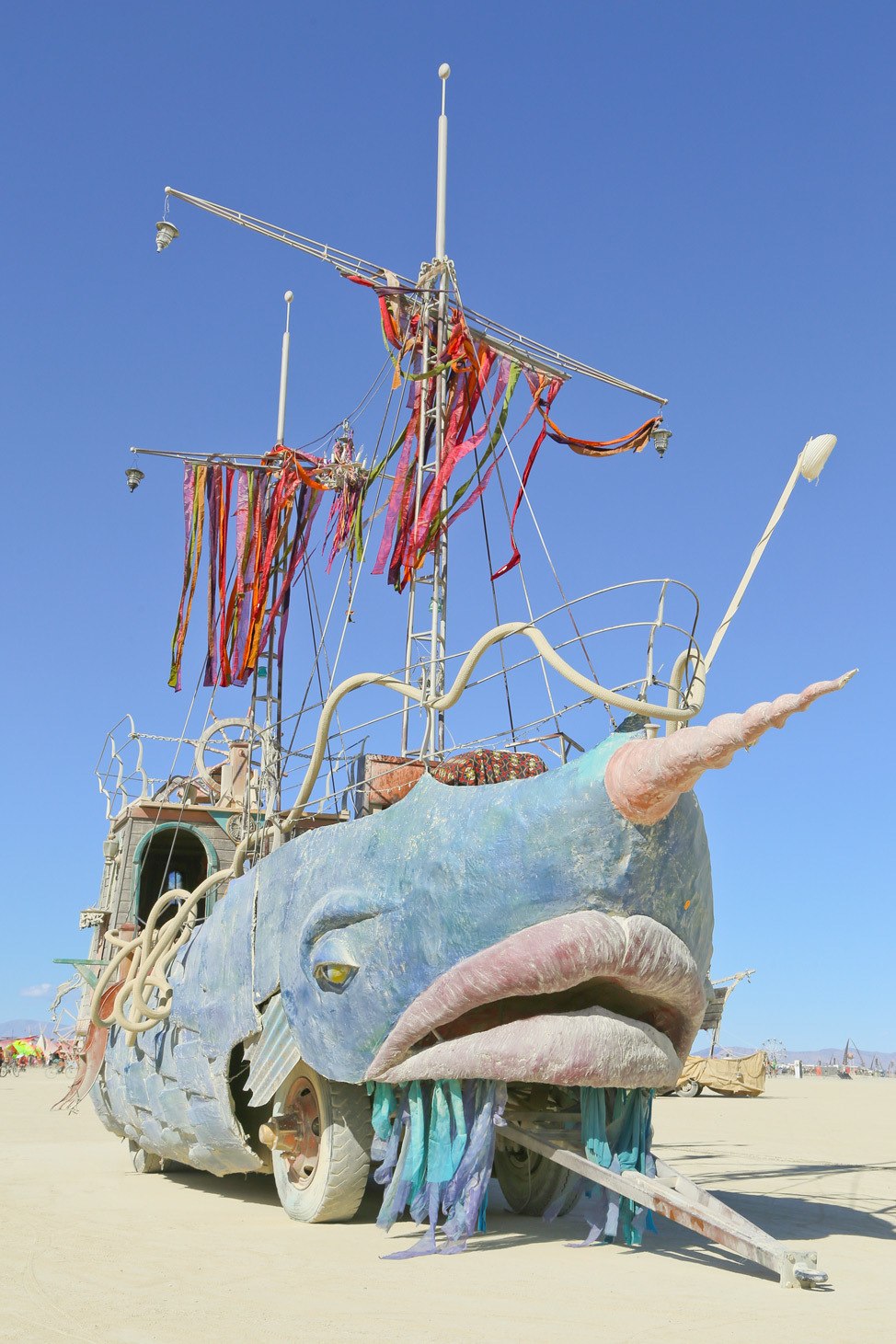 • Reduce culinary waste: Make a general meal plan with your camp. You don’t need to decide exactly what you will eat each night, but have a few dinners, breakfasts and lunches planned out, as well as snacks. This will help you narrow your shopping focus, and avoid food waste. I can’t tell you how much food I threw out both years I was at Burning Man. One of the most common rookie mistakes at Burning Man is packing too much food. When on the playa, cook only what you plan to eat, try to share the rest, and compost, if possible, the scraps.

• Reduce carbon emissions: The majority of Black Rock City’s carbon emissions are caused by getting to and from the event. Consider either carpooling (it makes the wait way more fun!) or hitching a ride on the Burner Express from Reno or San Francisco. You’ll be rewarded with a dedicated bus lane at the gate to bypass traffic and specially reserved camping spots. 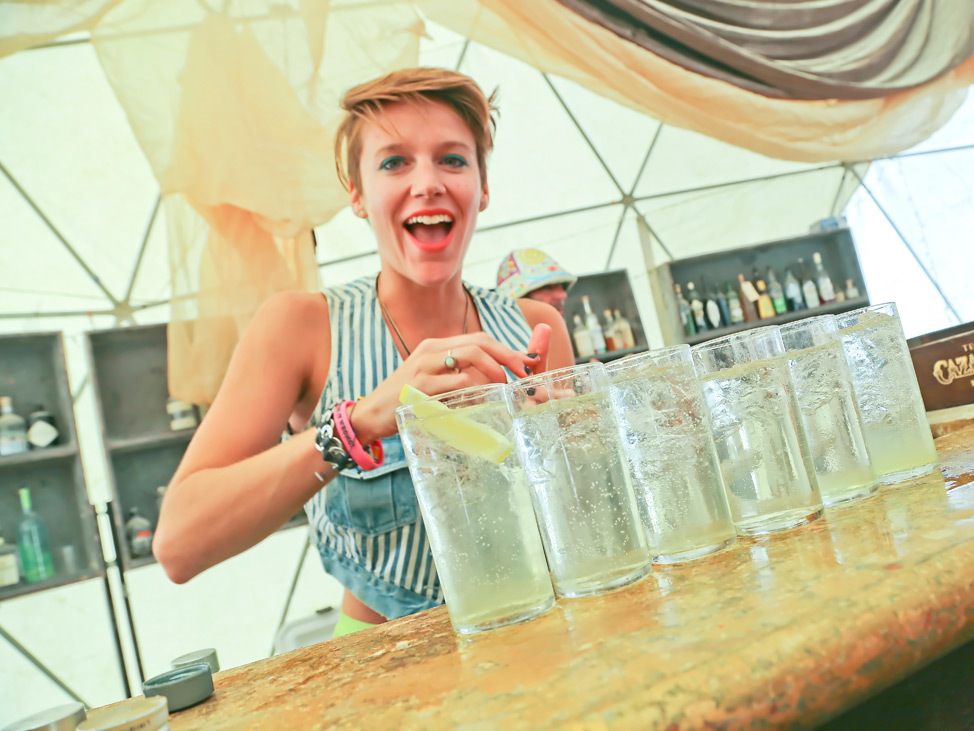 • Camp clean: Consider camping with AE Zone, and alternative energy village that does not allow generators.

• Show off: Nailing the whole green burning this? Enter the Green Model Camp Contest by Earth Guardians. Winners receive kudos from Burning Man and two tickets to the next year’s event! Earth Guardians have fantastic resources for green burning. Check out their excellent beginner’s leave no trace guide, their plastic-free guide, their sample LNT plan and their sample green camp plan. 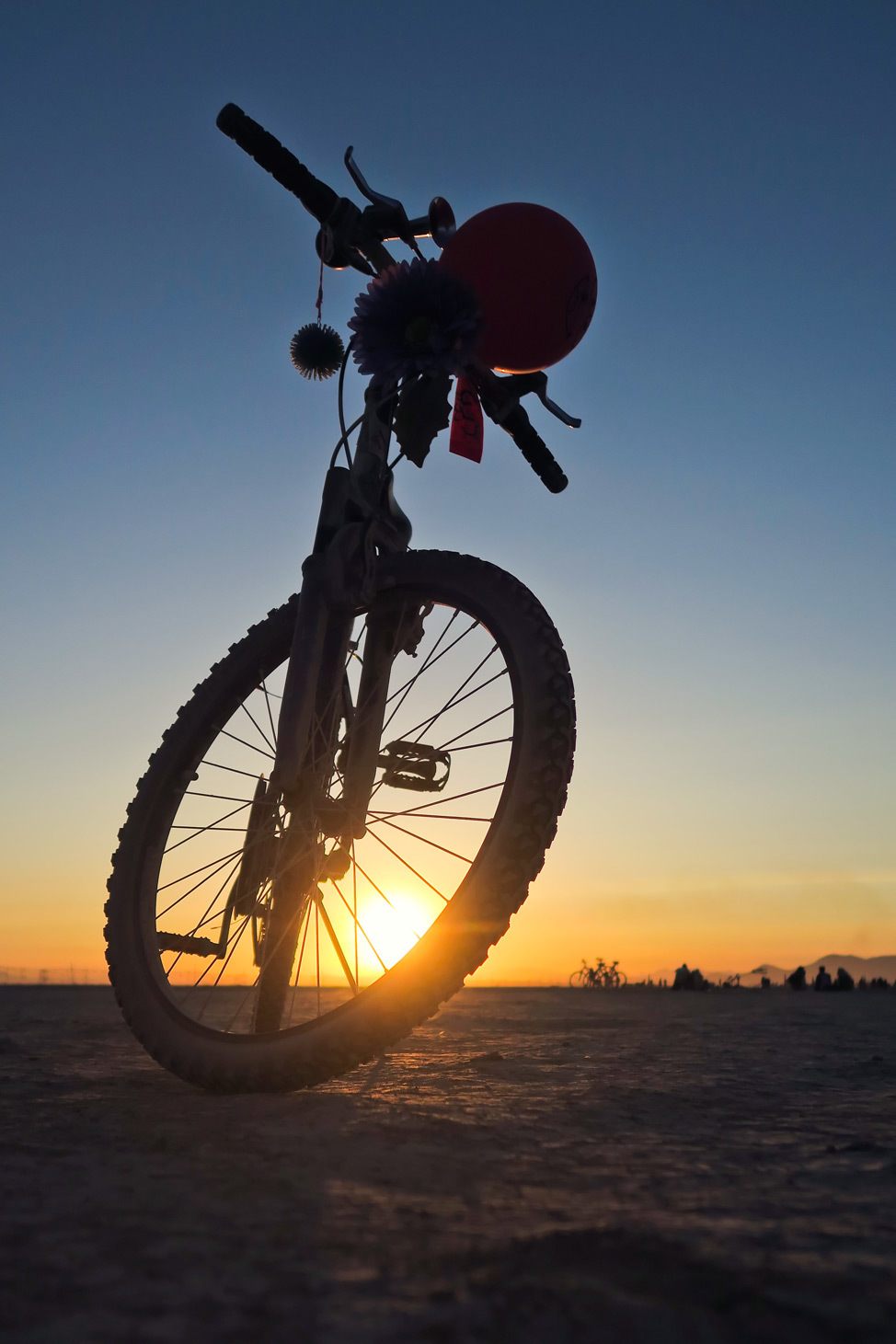 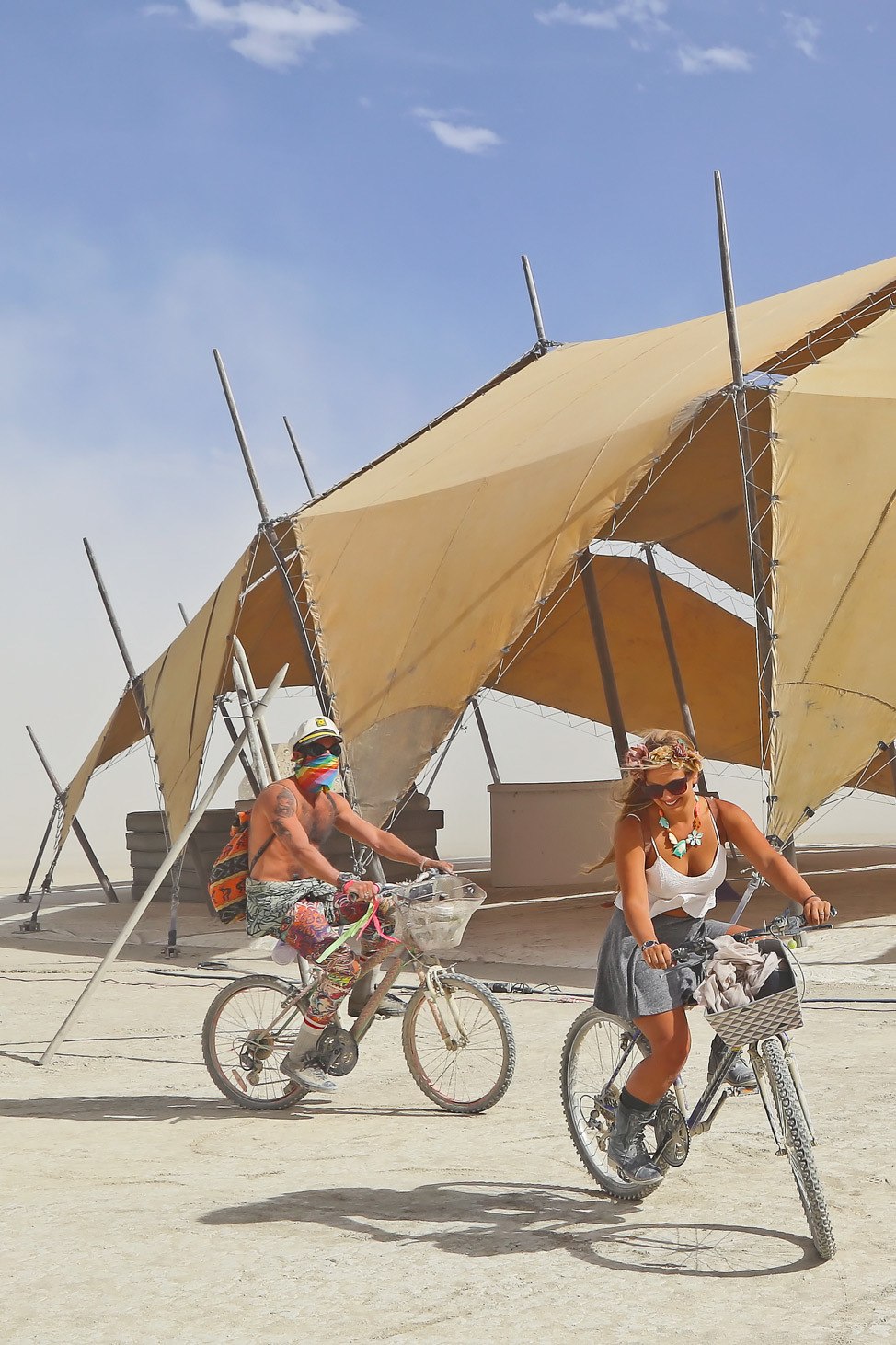 Looking for a little more inspiration on how to green up your life both on and off the playa? Check out the following blogs, some of my favorite resources on living consciously.

Trash is For Tossers 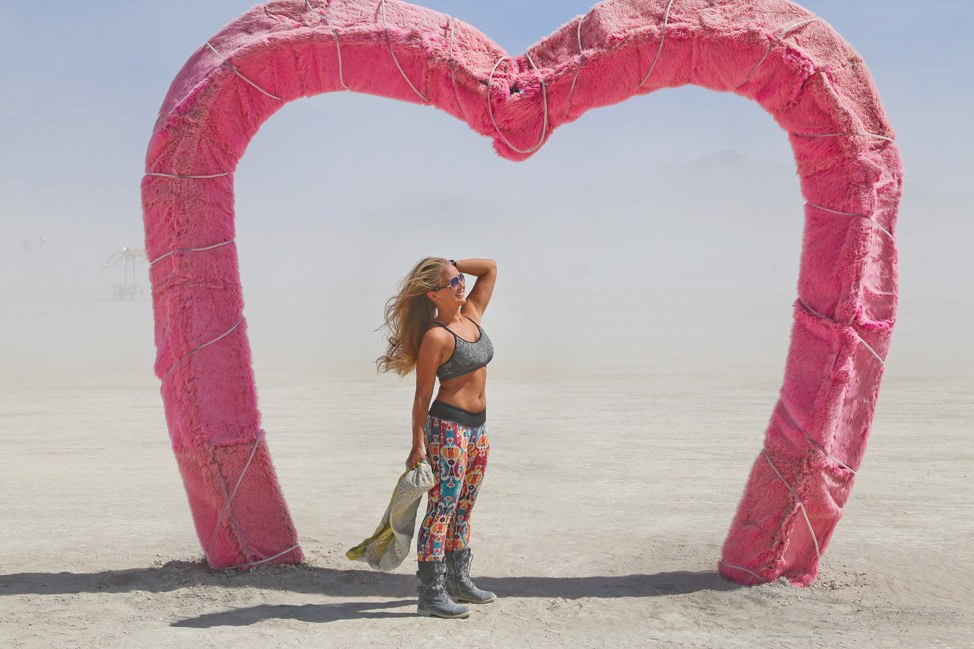 A Note on Carbon Criticism

Burning Man, like any festival that people travel far and wide to attend, is inherently impactful on the environment. There are extremists who believe that Burning Man shouldn’t exist because of the carbon footprint it takes for its participants to get there. (Others point out that Burning Man takes 68,000 people off the roads, off the power grid and off other natural resource drains for a week, which balances out the energy it took to get them there.)

My perspective is that people have been finding ways to gather and put themselves face to face with other people since the beginning of time. Traveling for networking conferences, religious pilgrimages, celebratory festivals, sporting competitions and creative collaborations — these are all important parts of what it is to be human. Sustainability needs to be just that — sustainable. Ideas are infectious, and I think giving up festivals would be cutting off people’s exposure to a lot of important ones. 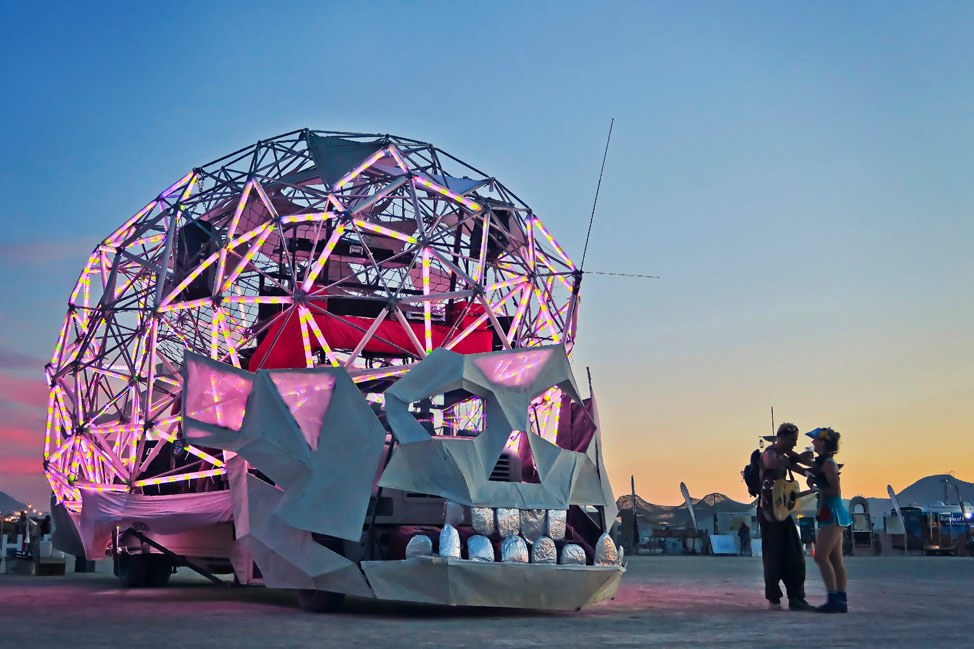 Frankly, I think a lot of people pick on Burning Man in particular because Burning Man places an enormous emphasis on leaving no trace, in the same way that the media criticizes Leonardo Dicaprio for flying a private plane while daring to be an outspoken environmentalist. (You don’t hear the same loud criticisms lobbed at celebrities or festivals who make no public effort toward being green.) No singular person and certainly no gathering of thousands of persons is going to be perfectly sustainable. What we should be, always, is striving ever closer to it.

Burning Man, for many people, has become not so much the way they spend their lives for one week out of the year, but rather a way of thinking and acting all year round. The process of leaving no trace should be started before one even leaves their home for the desert, and should in fact carry over into one’s daily life, because the entire planet on which we live deserves to be treated with the same sense of reverence as the playa. — Burning Man 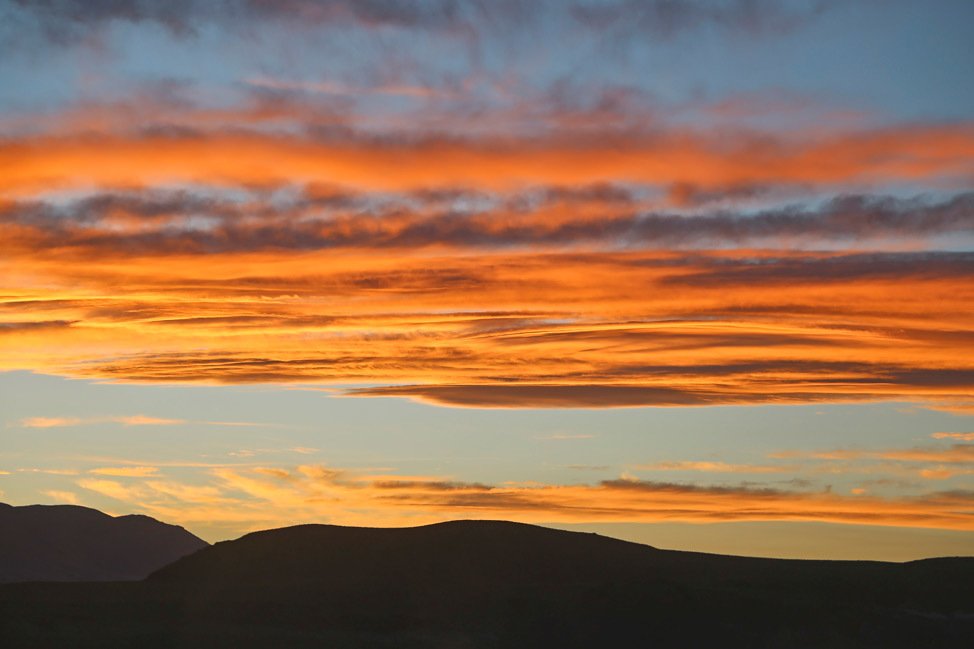 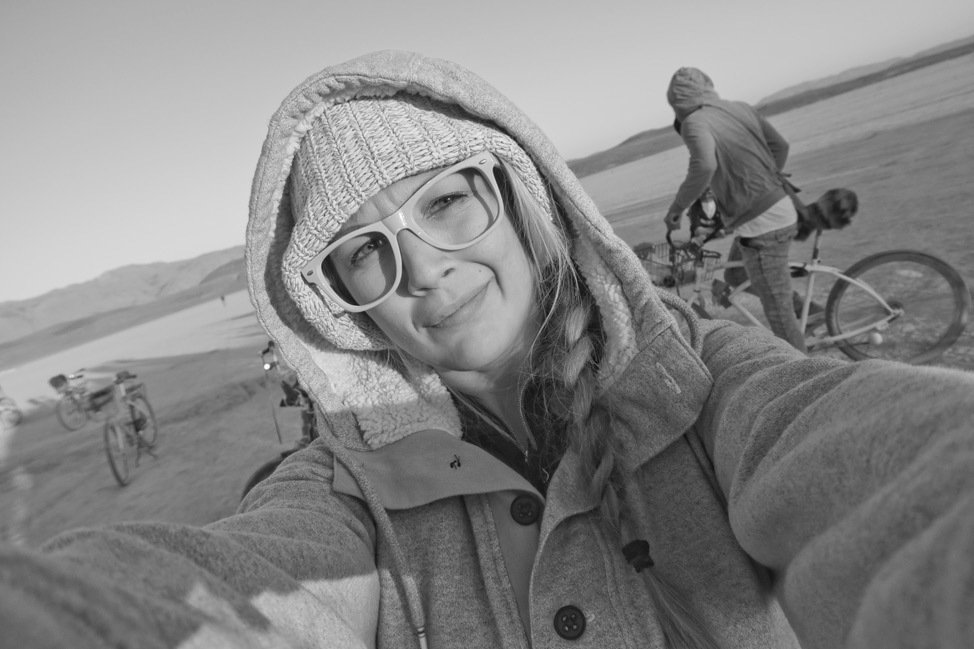 How do you green your festival going? Let’s start a conversation in the comments!