Lima is a massive and sprawling city and after two visits and over a week total within its limits I hadn’t set foot in the historic downtown area. I had stuck to Miraflores, the city’s modern tourist core, and Barranco, a bohemian seaside district bursting with charm. But I knew I couldn’t leave the capital without setting eyes on the country’s most regal Plaza del Armas, and so I set off on Lima Discovery Walking Tour. 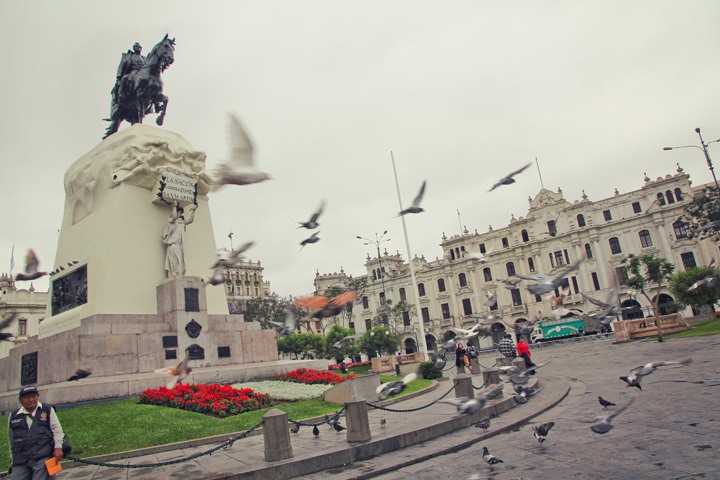 As I turned into the Plaza San Martin, I smiled to see Giovanni, my guide from my Pisco Sour Making Tour of Lima, standing at our designated meeting spot. I introduced him to Anders and caught him up on where my Peruvian travels had taken me since we’d met on my first trip though Lima. Meanwhile, we admired the colorful plaza and the well-camouflaged fast food restaurants hiding around its perimeter. 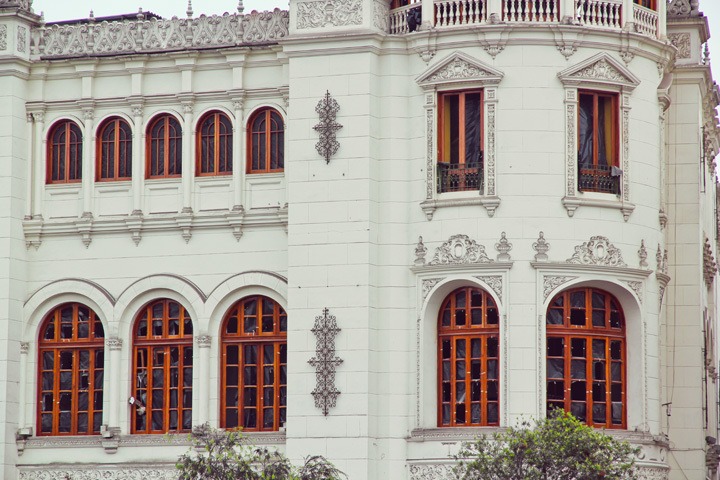 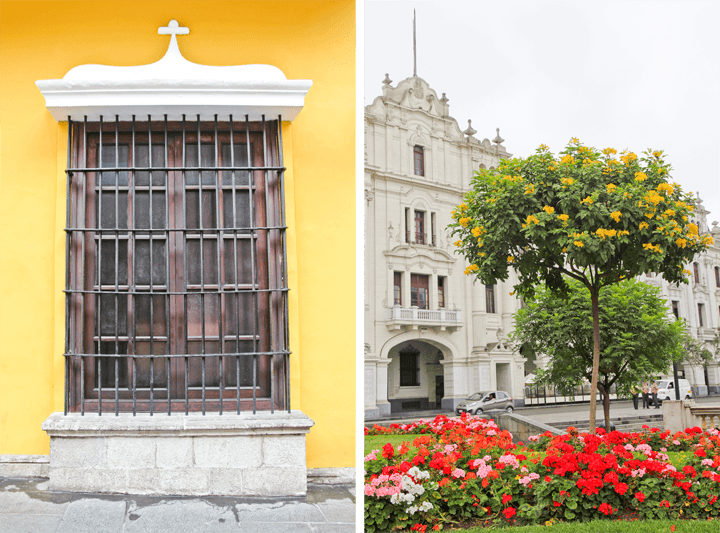 Downtown Lima is well preserved — for the moment. Giovanni let us in on a little secret: geologists are waiting anxiously for a major earthquake they feel the city is due for, and they don’t know if the colonial architecture will survive. 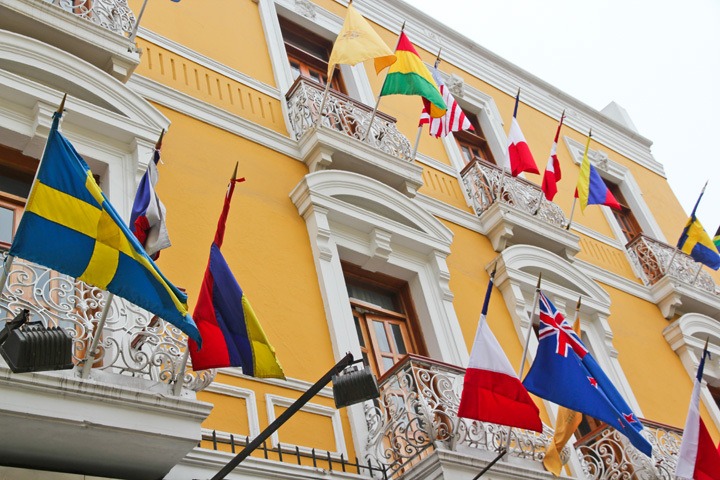 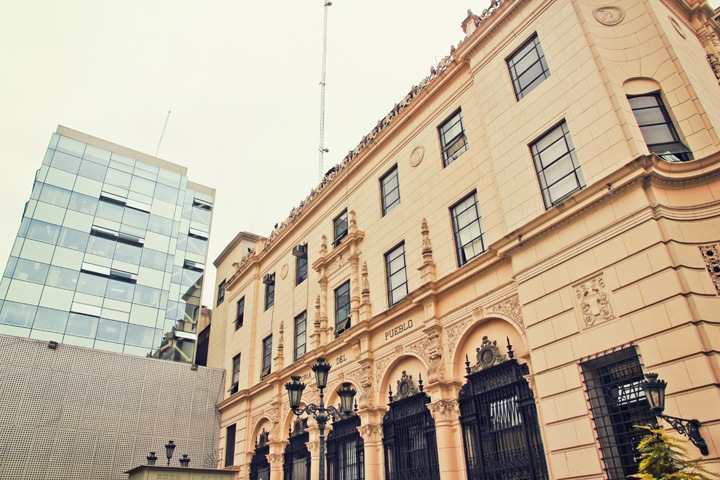 Our first official stop was Iglesia de la Merced, the site of the first Latin Mass in Lima. Built in 1541, this ornate baroque church is still an active site of worship. I felt a little awkward listening to tour anecdotes while the pious prayed beside us, but I did manage to take a few discreet photos without feeling too blasphemous. 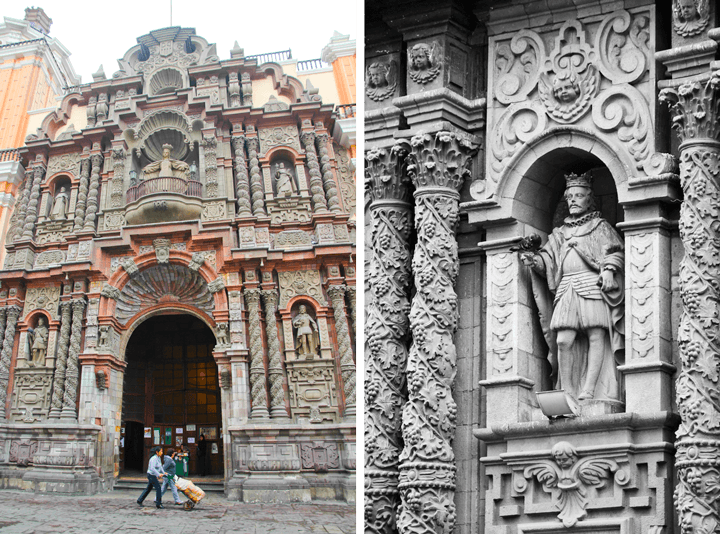 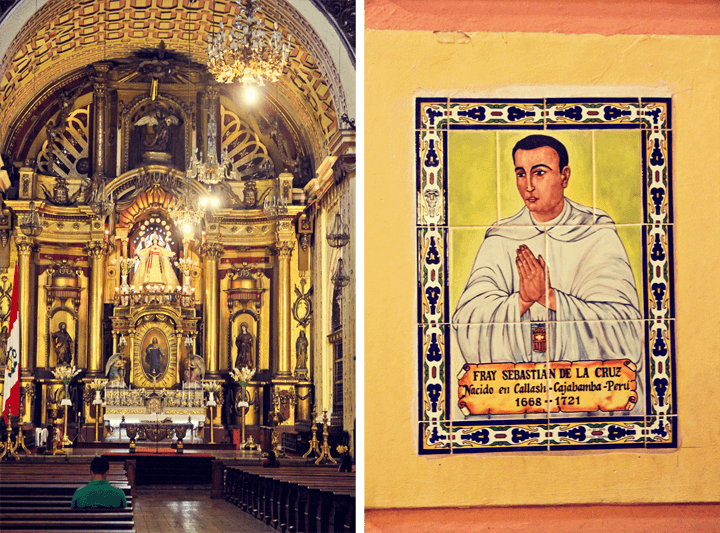 Next up was another church, the Iglesia de San Pedro. Giovanni informed us that this was the church that all girls in Lima grew up dreaming to get married in thanks to its ornate, gold gilded interior. Personally I’m more of an outdoor weddings kind of girl, but I could admire the craftsmanship of the ornate mosaics within. 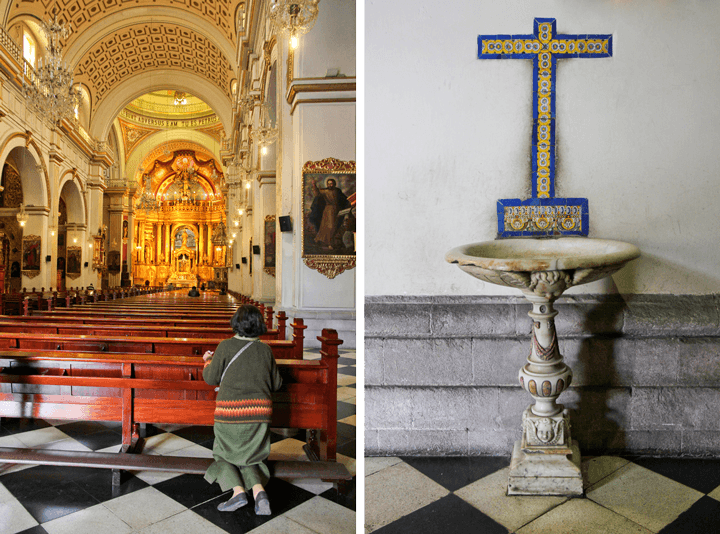 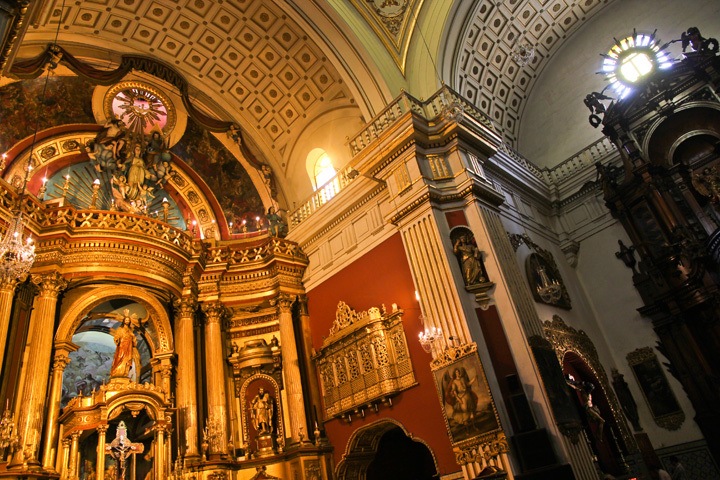 Having had our fill of religious monuments for the moment, we headed for the Central Market. It had all the hallmarks of a good olfactory-stimulating foreign market experience: flies swarming around raw meat swinging from metal hooks, fish in various states of gutting, colorful vegetables both familiar and exotic piled against every wall, and mysterious potions for sale in the dark corners.

Thankfully, Giovanni warned us against eating anything in the market, saving me from having to make any awkward “But I’m really not hungry…” excuses. 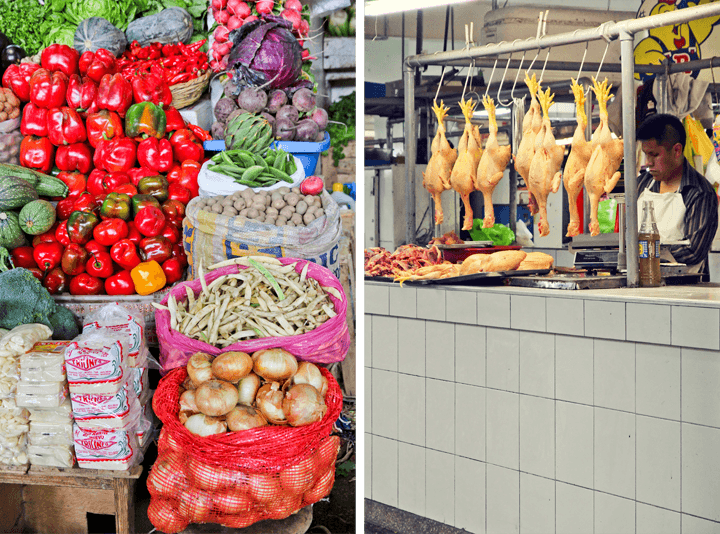 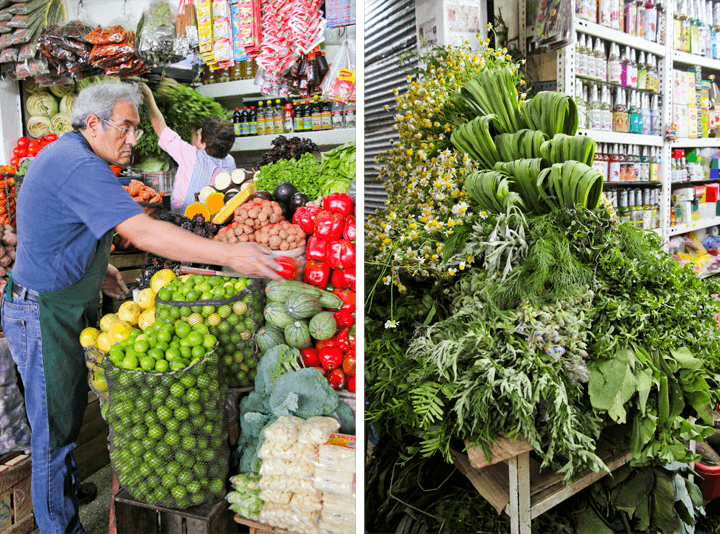 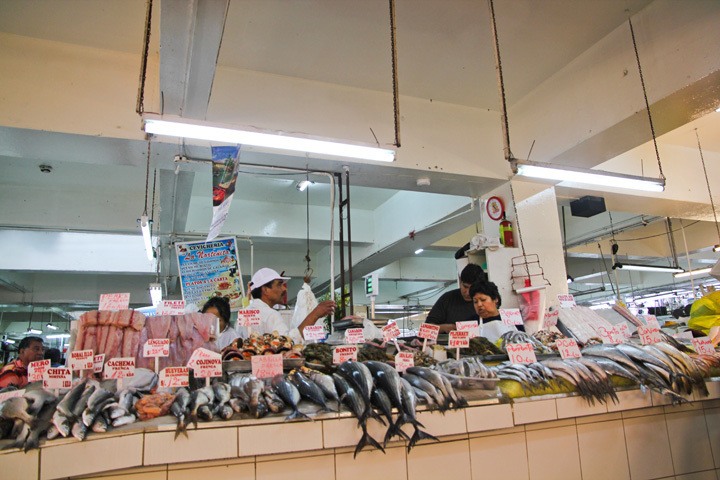 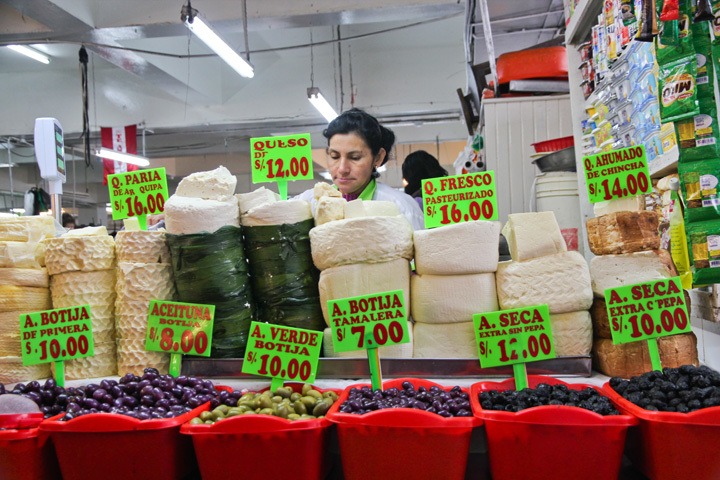 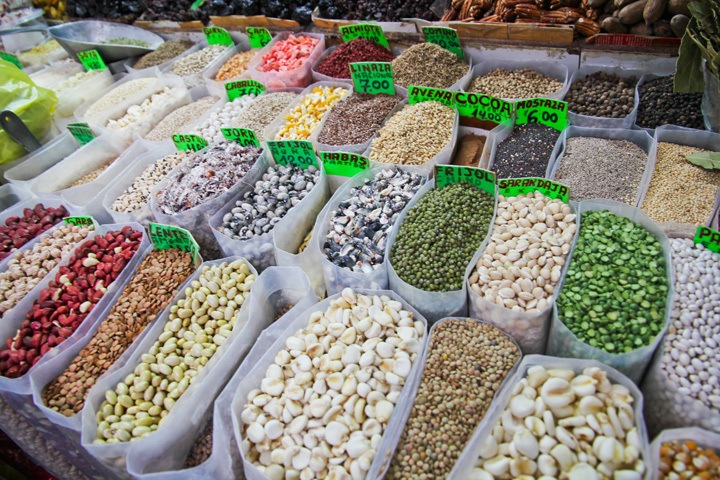 Neighboring Central Market was El Barrio China – Lima’s own little Chinatown. Though it basically consisted of one lantern-strewn street, we admired the Asian influence in the potted bamboo plants, Peking duck and Eastern medicines for sale. 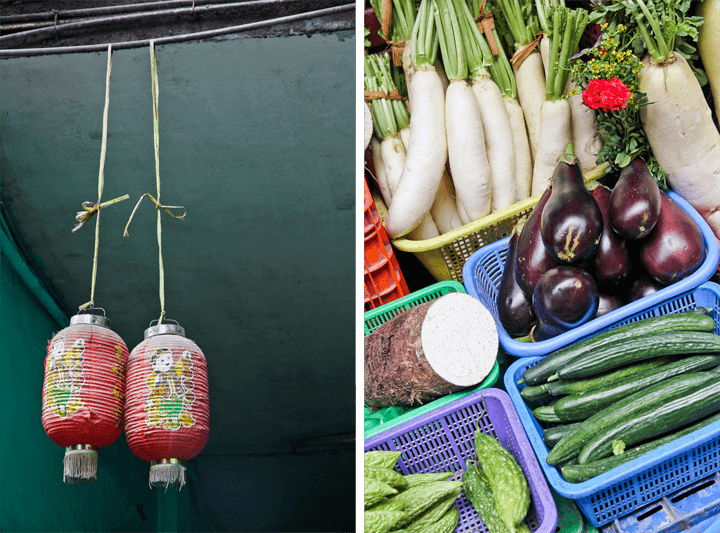 After, we took a compulsory guided tour through Monasterio San Francisco, which I disliked immediately due to the no-camera rule, though warmed to when we walked through the catacombs lined with more than 70,000 bones (but seriously with the no photos?!)

Finally, we had reached our final destination: Lima’s central Plaza del Armas. Having visited the Plaza del Armas in each and every Peruvian city I had stepped foot in thus far, I felt qualified to concur that this was quite a grand one. 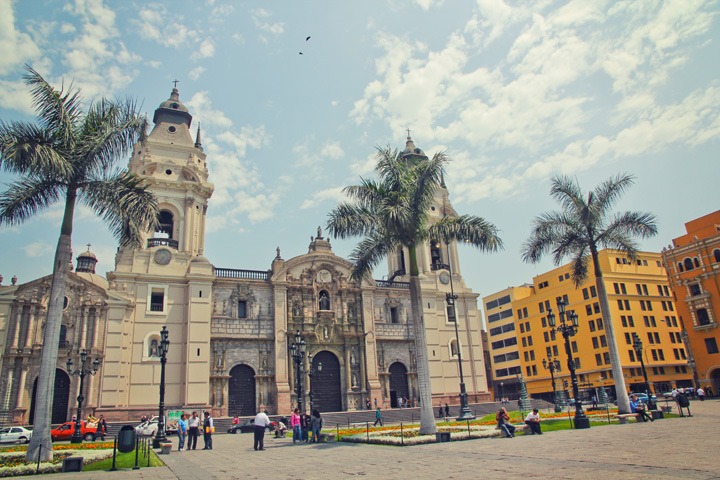 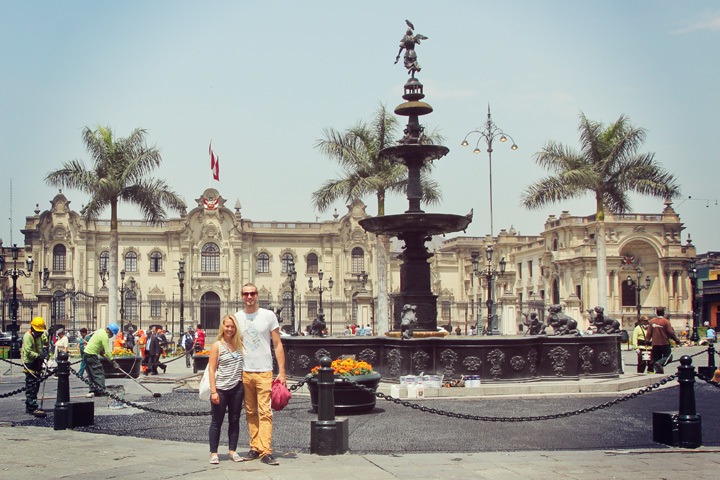 We toasted to our tour in Hotel Maury, which claims to have invented the infamous Pisco Sour. The next morning, we were hopping a flight into the jungle. I was glad we said goodbye to Lima in style. 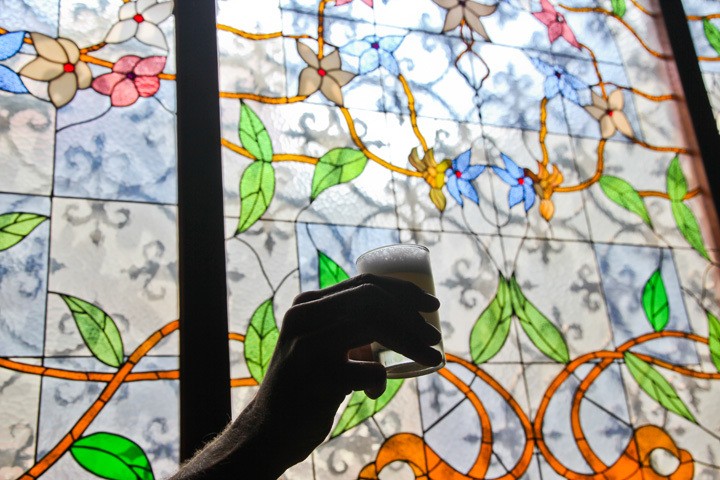 Essential Info: We give the Small Group Lima Discovery Walking Tour a 4/5 for entertainment, quality, and value. The tour costs $30, lasts 4-5 hours, and begins at Plaza San Martin downtown. If you are staying in Miraflores or Barranco, leave at least 40 minutes to arrive by cab.

Super Sale Alert! The always rockin’ Travel Blog Success course is having a sale this week! This is the online course that helped me make Alex in Wanderland what it is today, and the first thing I recommend to those who write to me for advice. It changed the way I looked at travel blogging and helped me move it from a hobby to a business. The member’s group gives me daily inspiration, feedback, and assistance (and a heavy dose of humor!) This is truly the warmest community in travel blogging, and all memberships are on sale now. Click here and use the code “TBS2014″ to 25% off memberships! Sale starts ends at 11:59 PM on Friday, January 10 and is valid only for the single payment option. See you in the forums!

On the Heels of History: Hiking the Inca Trail Part II

Exploring the Amazon Onboard The Aria Part II

Photo of the Week 134 A Rainforest Expedition: Where We Stayed
29 Comments...