Who’s ready for another edition of House Hunters International: Thailand Edition? It’s a little reality show I go through every time I return to Koh Tao and attempt to secure long-term accommodation. Compared to the real estate anguish I used to experience when apartment searching in New York, looking for a place to stay in Koh Tao is practically painless — there’s no paperwork, there’s no guarantors, there’s no mandatory moving company use or any of the other silliness that plagues my friends back in the big city. There’s simply perusing a few Facebook groups, driving around and looking for “for rent” signs and knocking on a few doors, and finally, picking a place and handing over a wad of cash each month.

Sure, it can get a little stressful weighing up the pros and cons of various inherently flawed flats and hoping the right place pops up at the right price at the right moment (availability is limited on a small island and long term expats hold on to the best places like Carrie held on to that rent controlled studio on Sex and the City), but by and large it’s a straightforward process. 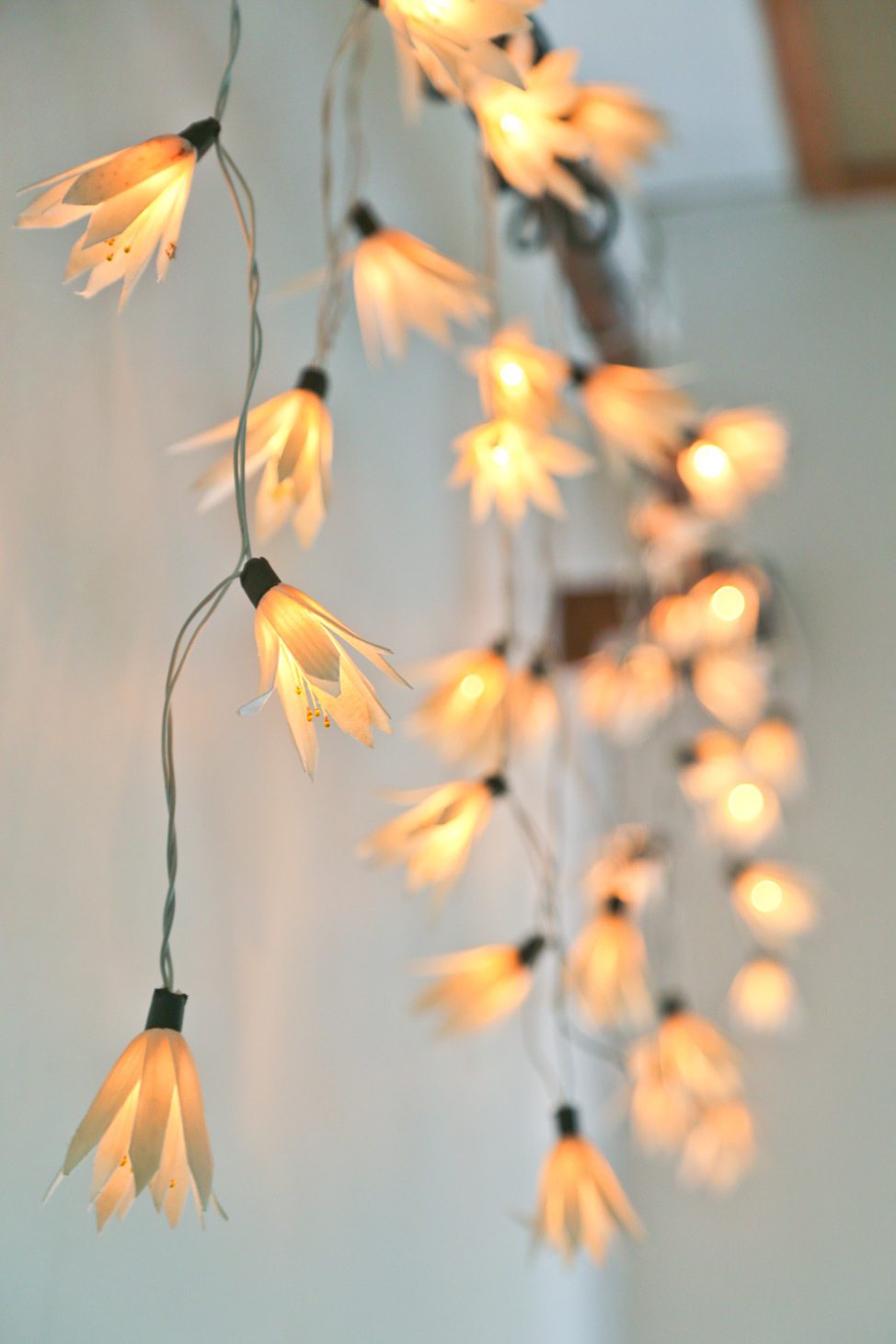 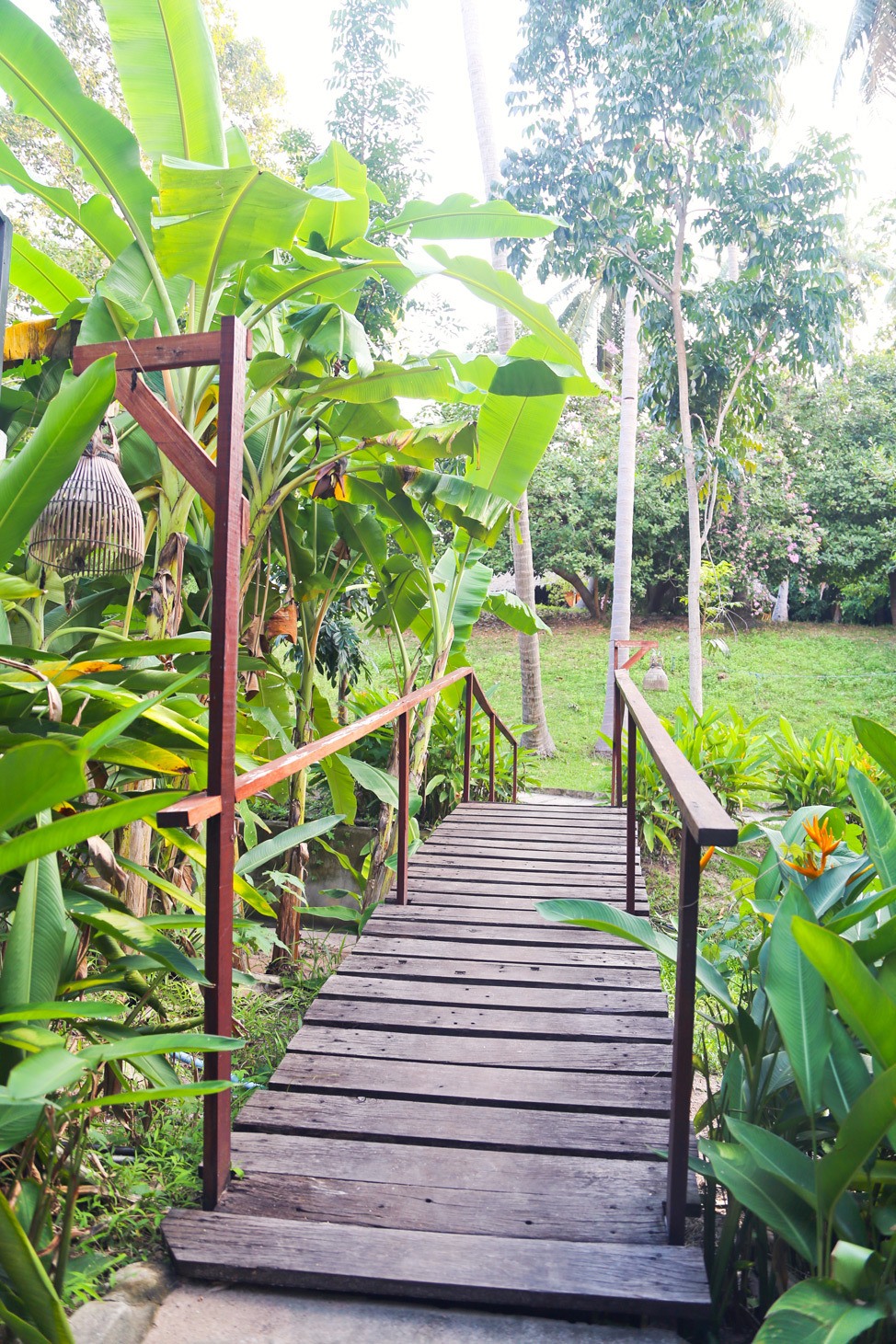 When I arrived back on Koh Tao in early October, I stayed at Thalassa Hotel while I looked for the perfect apartment. I used my usual routine of scouring local Facebook groups for current listings, asking around to my group of friends and island acquaintances, and driving through the area in Sairee Beach that I was ideally looking to live in and keeping my eyes peeled for available room notices.

I quickly narrowed my search to three apartments — a basic stand-alone bungalow with a cute screened porch and a super sweet landlord, a simple two-story wooden house with a to-die-for view, and a fairly modern ground floor unit in the same villa complex I’d lived in the year prior. Originally I hoped to have air-conditioning and looked at a few places that had it, but found landlords have gotten a bit cheeky in what they ask for for that particular amenity, and decided I could learn to live without it — after all, the rest of my friends on the island do! 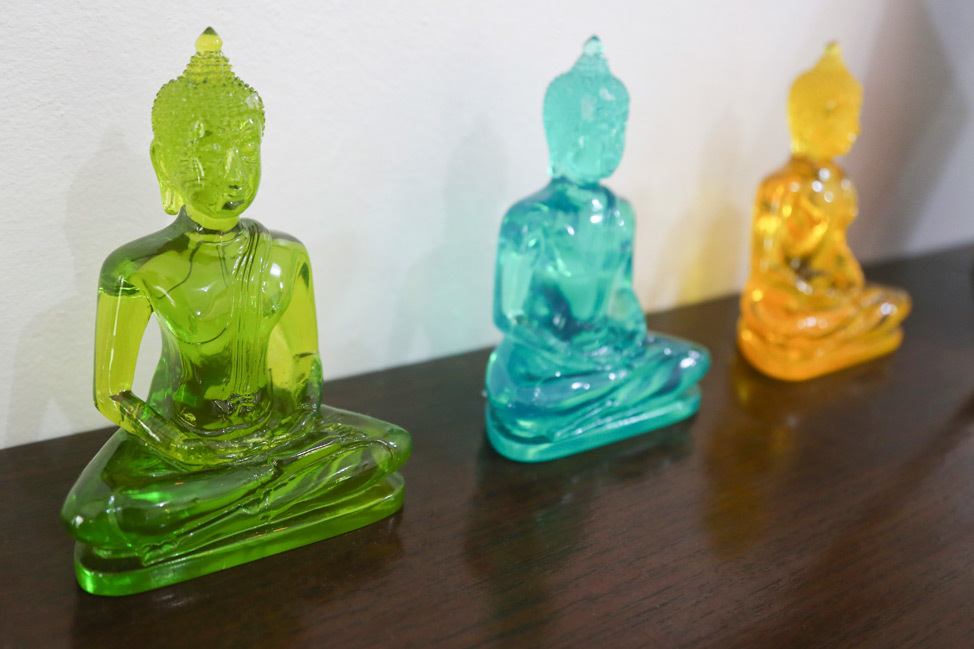 After a bit of back and forth I eliminated the first option for space and size value, the second for fear of the hill I’d have to drive and the spiders the former resident warned me about, and settled on the third — it was enormous, I already knew I loved the location, and it had both a couch (well, a futon), and a desk. The kitchen was unusually large and well-equipped for Koh Tao, including not just the usual mini-fridge, sink, hot water kettle and hot plate but also an actual stove, which I and my friends had fun using to bake and cook a few times throughout my stay. It also had a dining room table, nearly unheard of, which I occasionally dined at and sometimes used as a backup desk when I needed a location change.

With a six month stay ahead, the property manager offered me the place for 15,000 baht per month, or $420USD. That included all bills, wifi, cable, and a weekly cleaning and sheet and towel change. The entire complex also auto-switched to private power when the public power went out — a frequent occurrence on Koh Tao — which was a huge perk to me when working from home. I was also able to negotiate a delayed move-in date so that I wouldn’t have to pay rent while out of town for my upcoming conference in Bangkok, which was a nice low-season perk that I think was possible due to the fact that I was renting long-term and was a repeat customer. 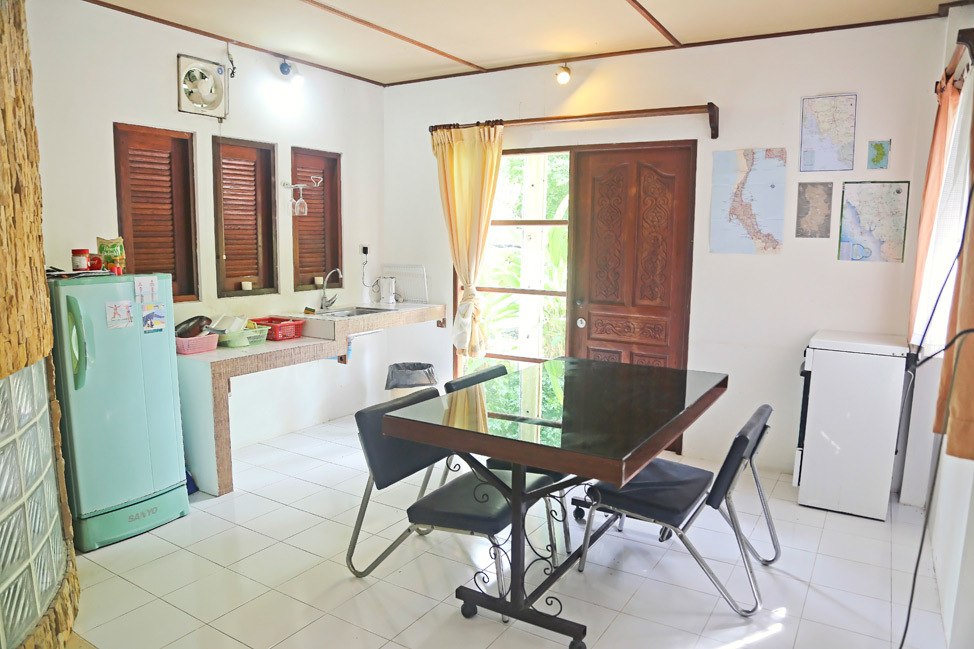 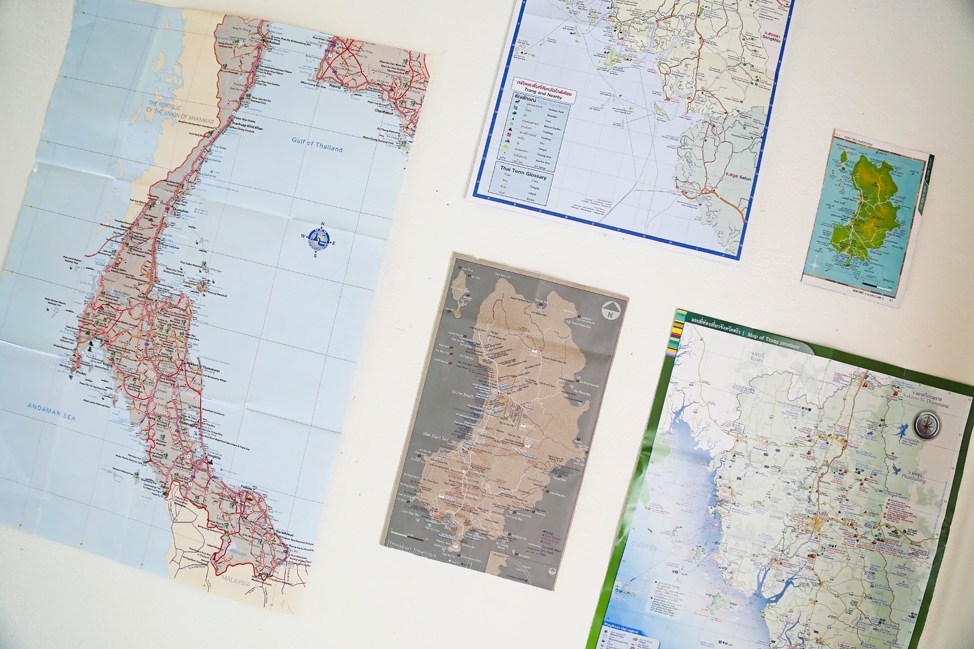 Due to my long stay, I really wanted to make the apartment feel like home, and so while in Bangkok I dedicated a day to buying all kinds of goodies at Chatuchak Market, including candles ($3), frames for family photos I had printed on the island ($14), pillow cases that I used to tie the bed and couch together and inject some color in the apartment ($6), bins for organizing my bathroom and closet ($6), twinkle lights that I hung over the bed ($10), and some bright Buddha figurines for my desk ($25). I also had a full length mirror made on-island ($22) and took down the not-my-taste artwork hung on the walls — except for the sculpture about the TV, which was unfortunately bolted to the wall — and replaced it with a collection of maps from around Southeast Asia (free!).

Considering the limitations of moving into a furnished apartment, living on a teeny island with no Ikea or AC Moore and trying to keep my spending in check considering I was moving out in half a year, I was pretty happy with how things turned out. 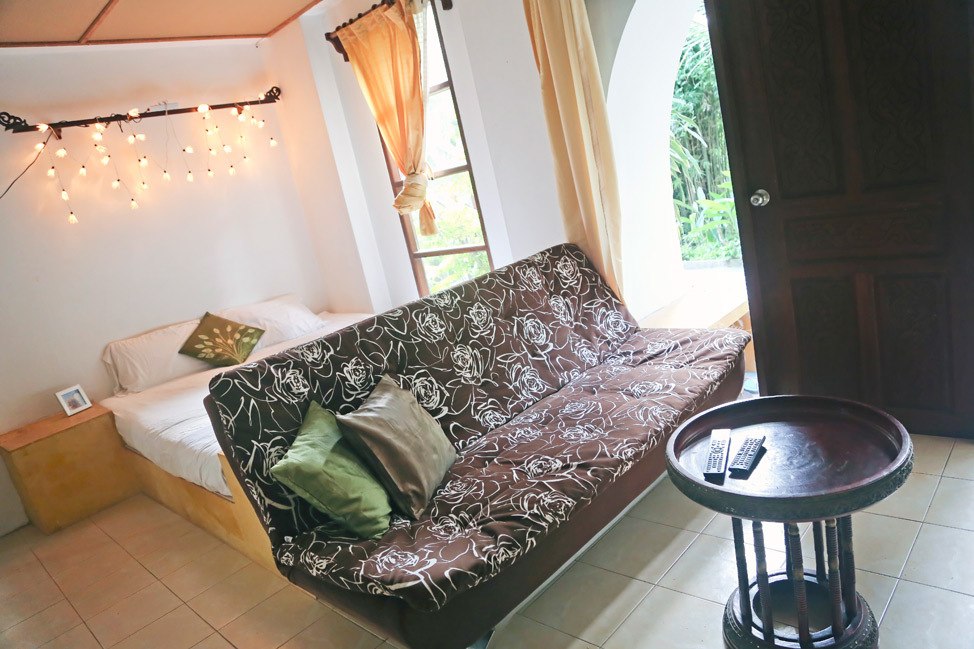 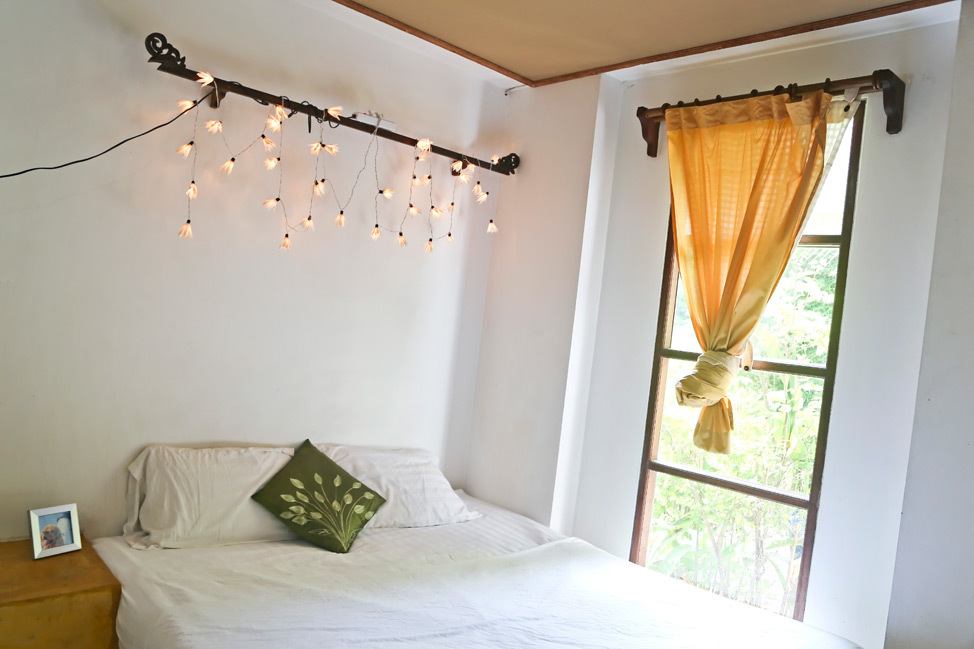 While on a trip to Koh Phangan I ended up buying a beautiful bolt of fabric that I covered the couch with — I regret not re-photographing the apartment then, as it really brightened the place up and changed the character of the place.

My greatest struggle with this apartment was the bed, upon which I feel quite confident you could drop a glass and it would shatter — that’s how hard it was. I can’t tell you how much I regret not ordering a new mattress the day I moved in. Instead I waffled back and forth about whether or not I’d get used to it, then didn’t want to spend the money for the remaining time once I realized I wouldn’t, and in the end dreaded crawling into bed every night for over six months. I literally laid there every night feeling angry until I fell asleep. Yes, I am an idiot. I did end up buying the thickest duvet available on the island — nothing too plush, unfortunately — and layering it under my fitted sheet as a makeshift mattress pad. 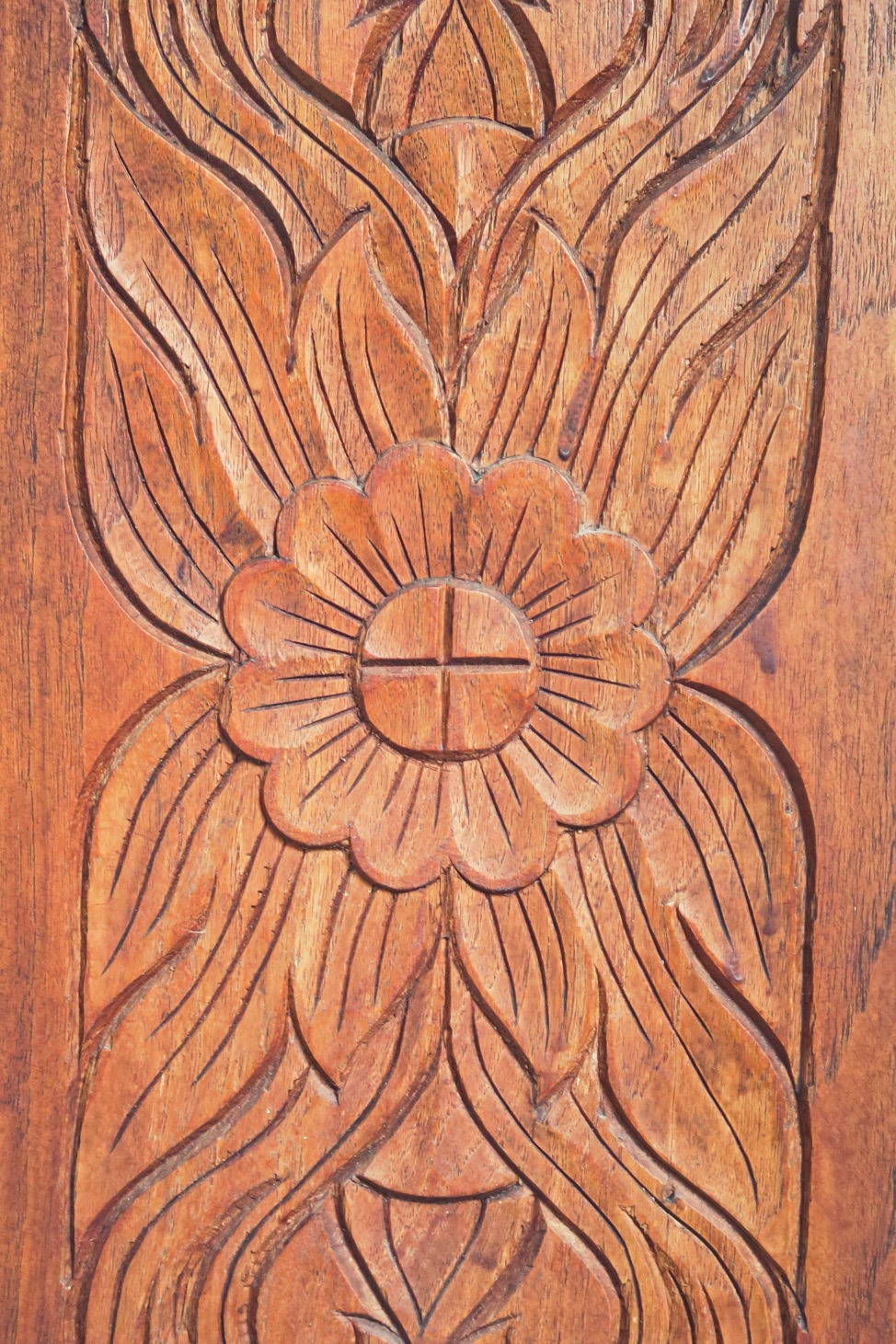 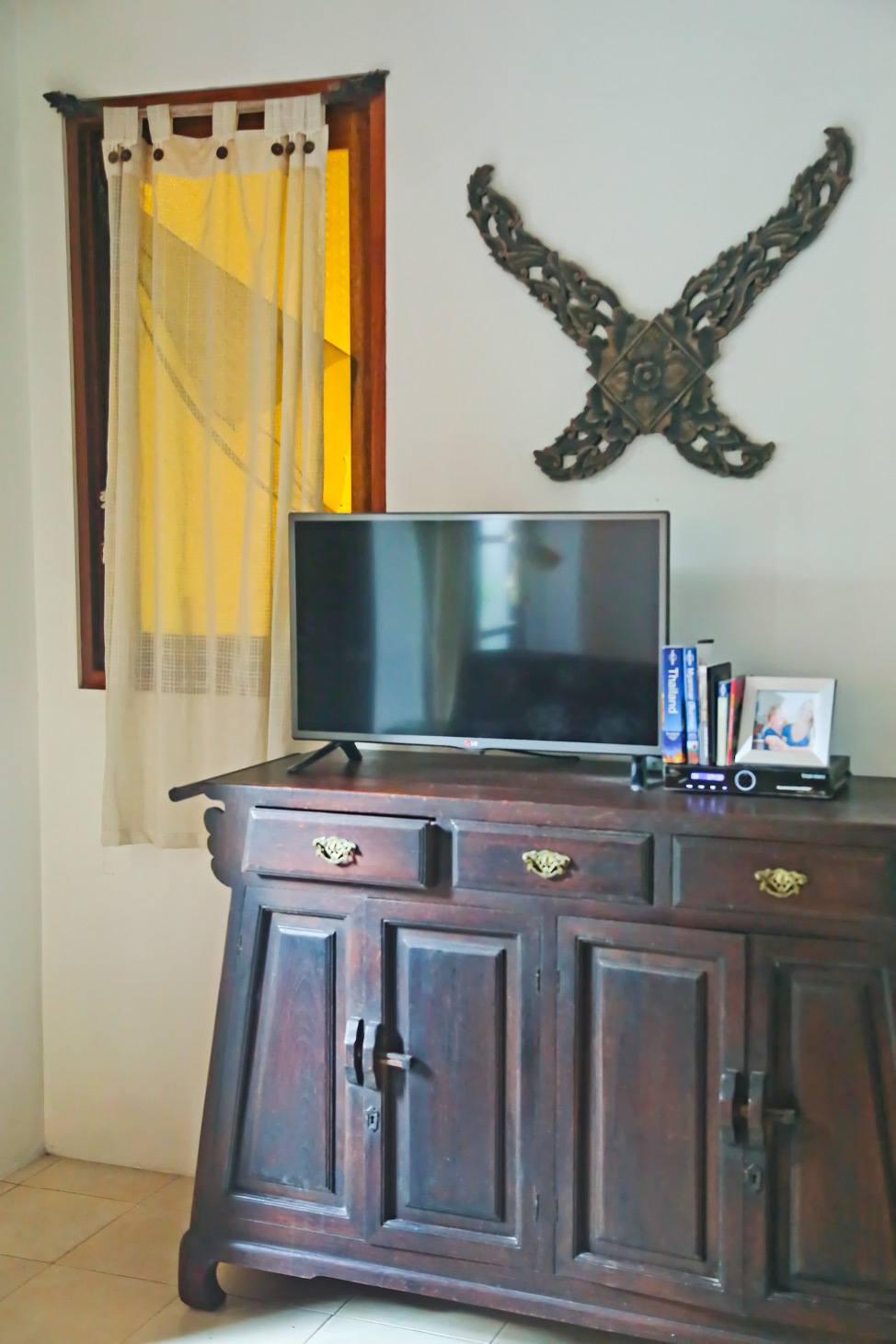 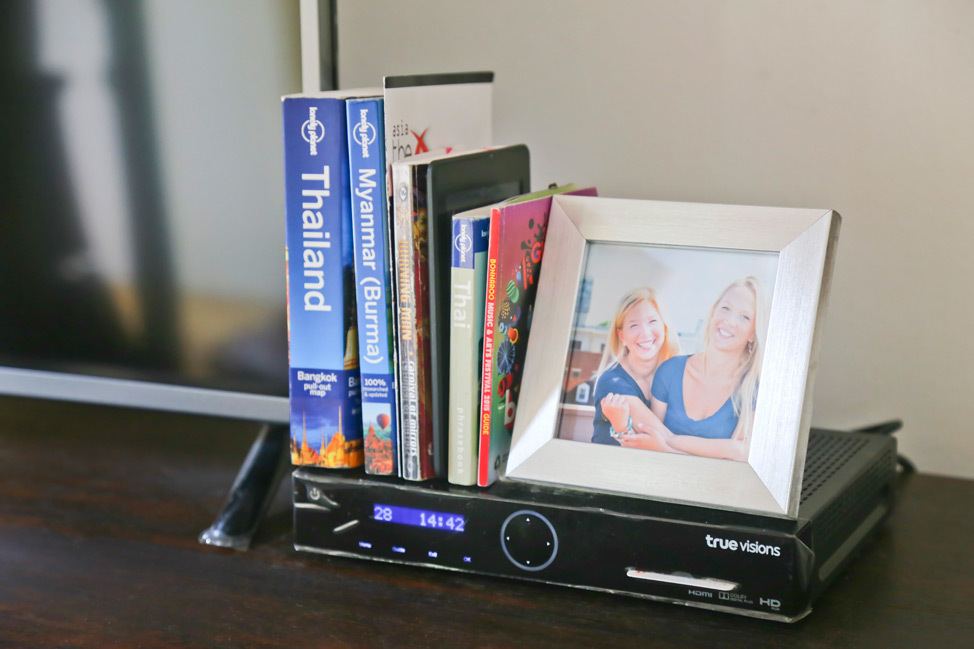 One funny feature of this apartment was the strange little low-ceiling loft. I decided to turn it into a walk in closet/dressing area, which really only worked due to my 5’1″ frame! Regardless, it worked well as an open closet, which is really necessary in this humid of a climate to stave off mold as best as possible. The only closed storage I had in the apartment was the bureau that the TV stood on.

Under my closet nook sat my desk, where I spent the majority of my waking hours. 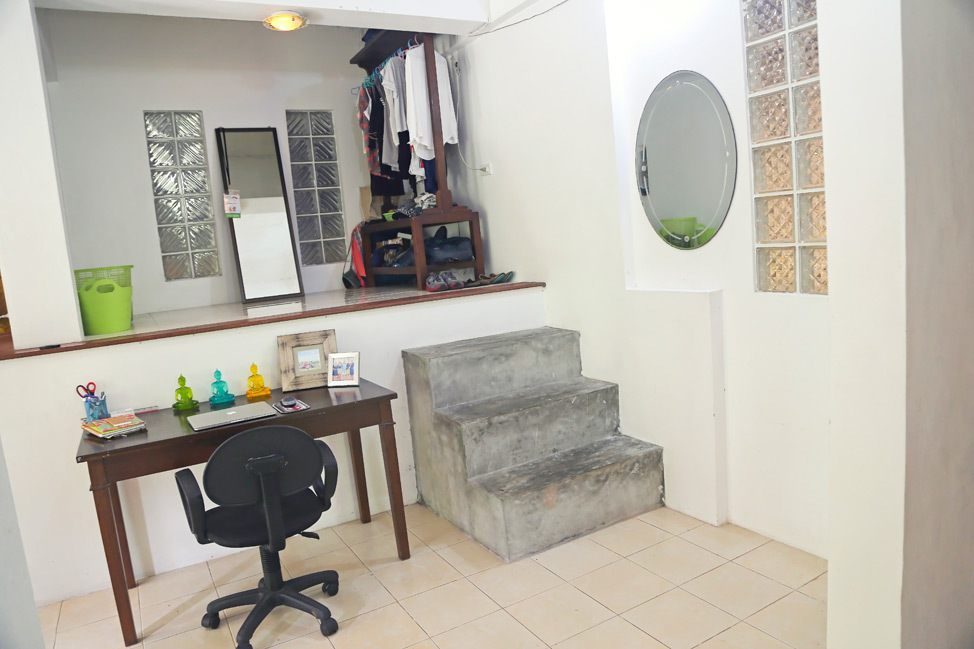 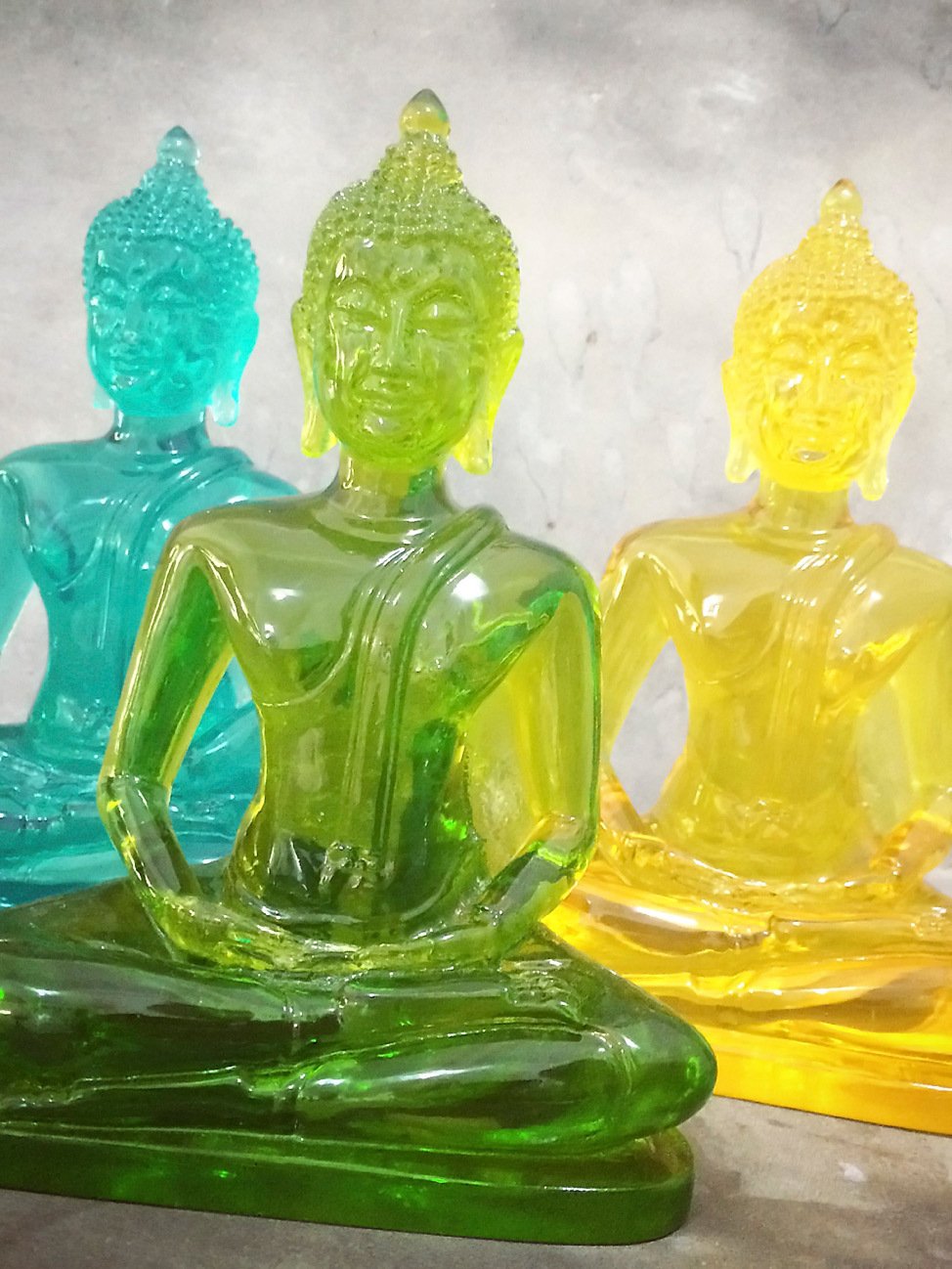 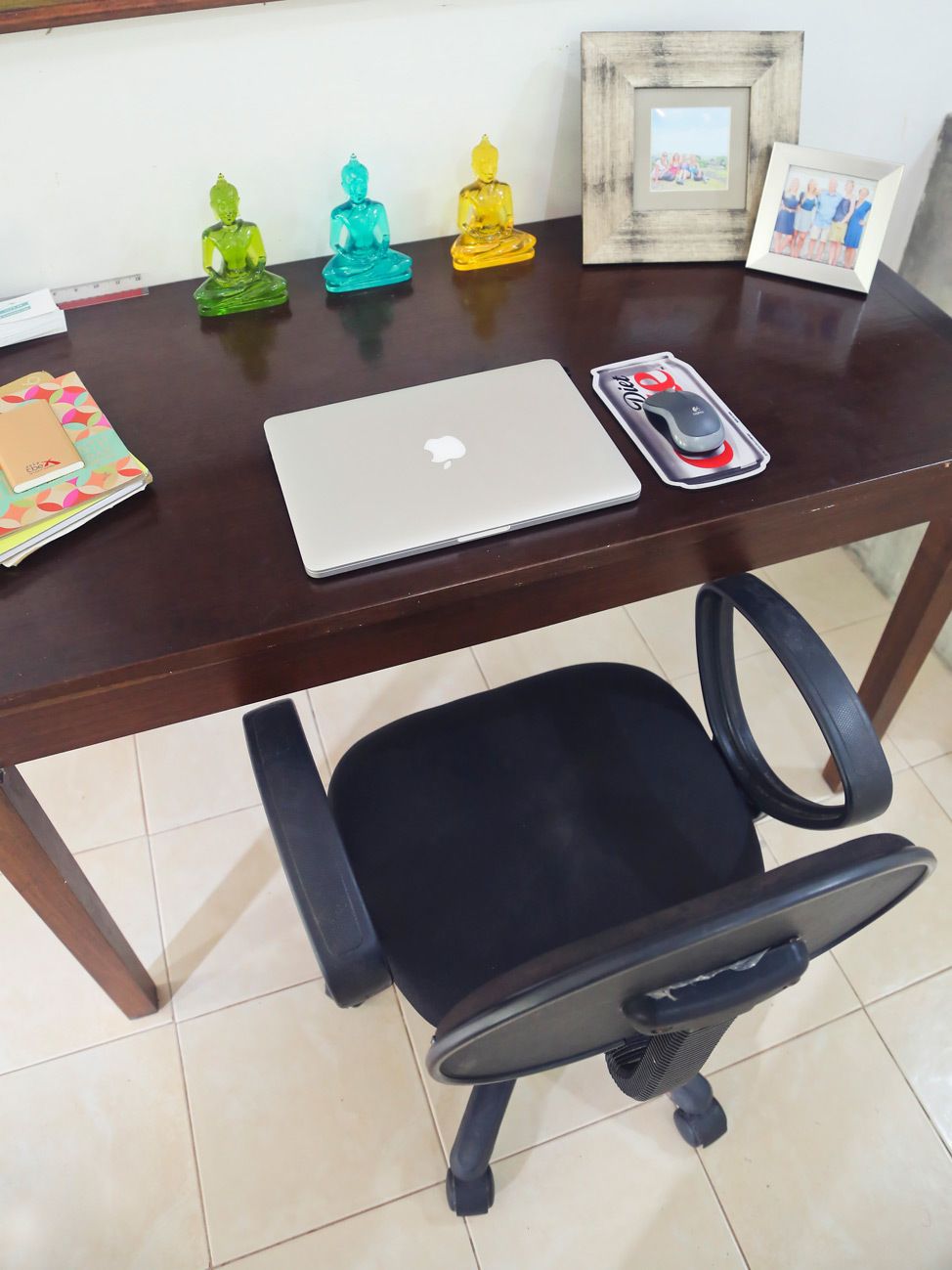 My bathroom was peculiarly large, a frequent peculiarity of Thai apartments. But hey, it had a hot water shower and a flush toilet, so no complaints from me. Curious what is in all those bins? One was makeup, one was medicine, one was general toiletries, and one was backup products — reserves of particular products I or friends brought from the states that couldn’t be replaced on the island. 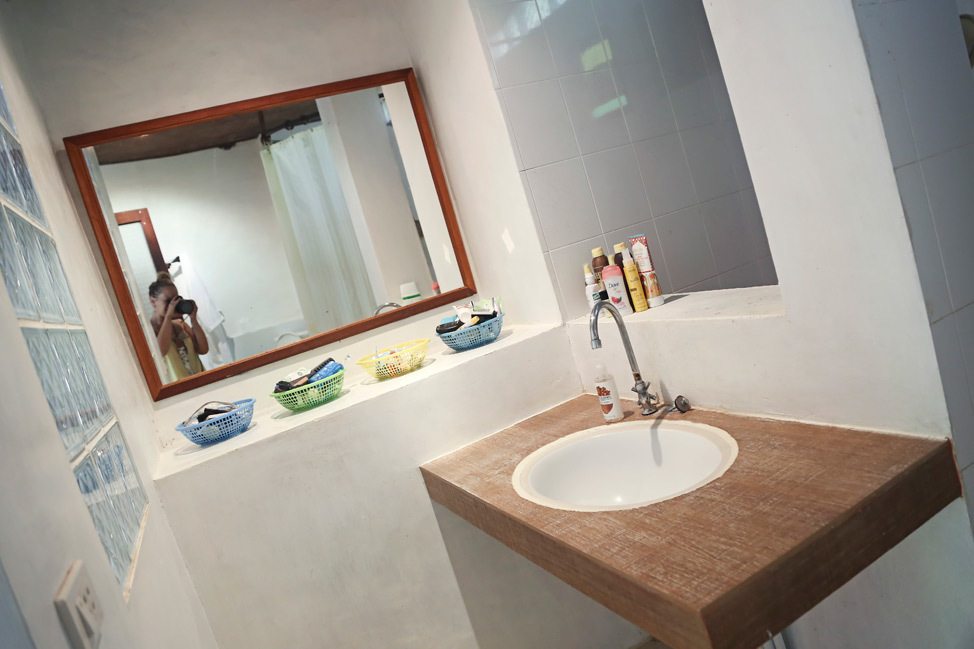 One perk of this apartment was a covered parking hut, which comes in handy during heavy rains. I bought this little beauty for 15,500 baht and then resold it for 15,000 baht six months later when I left — not a bad deal for half a year of transport (I’m considering a post about buying, selling, and maintaining bikes on Koh Tao if any potential residents or long term visitors are interested!) 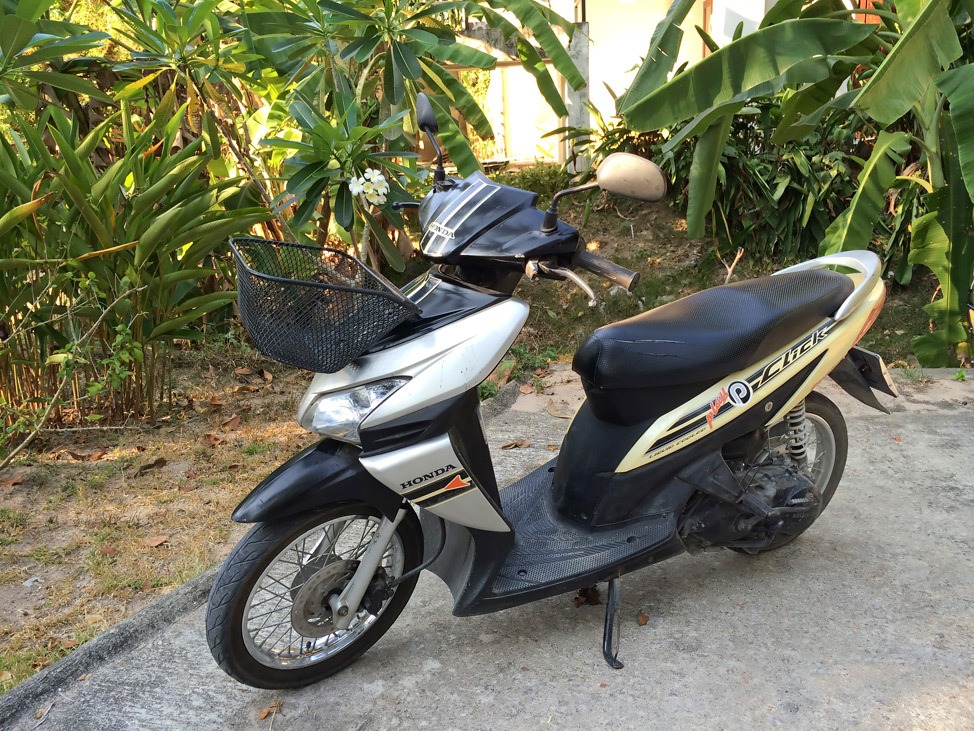 The location was perfect, the amount of space a treat, and the price perfect. That said, there is no perfect long-term apartment on Koh Tao — at least not that I’ve found — and the drawbacks of this one did start to nag at me a bit over time. The horrific mattress, the lack of privacy (other residents of the eight unit complex often walked by my open windows), no view, and the general “cave” feel of being on the ground floor mean I probably would not return to this particular unit, though I absolutely loved my time there while it lasted.

Also, while I’ve found some degree of miscommunication with landlords to be a fact of life, I’ve found that having an offsite owner and an onsite property manager has led to telephone-game-communication and occasional frustrations in this complex, like when I was warned I may be charged for having visitors (I had two friends come to stay in six months, each for just a couple days) or when extensive repair work that involved tons of hammering in my kitchen happened on the morning of January 1st amidst a tragic New Year’s Eve hangover (what was I being punished for?) But I suppose the optimist in me would say that’s all part of the adventure of living abroad. 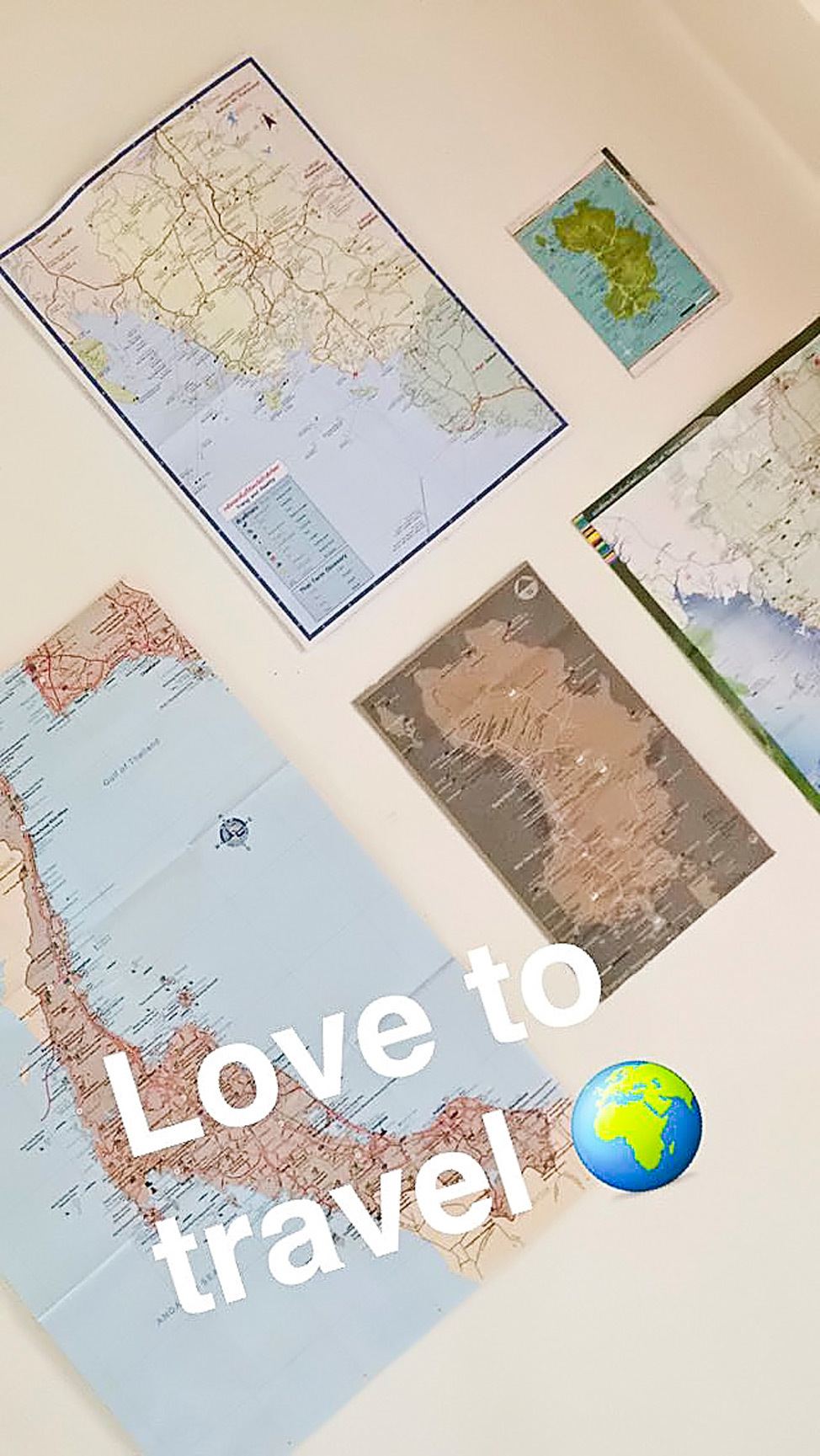 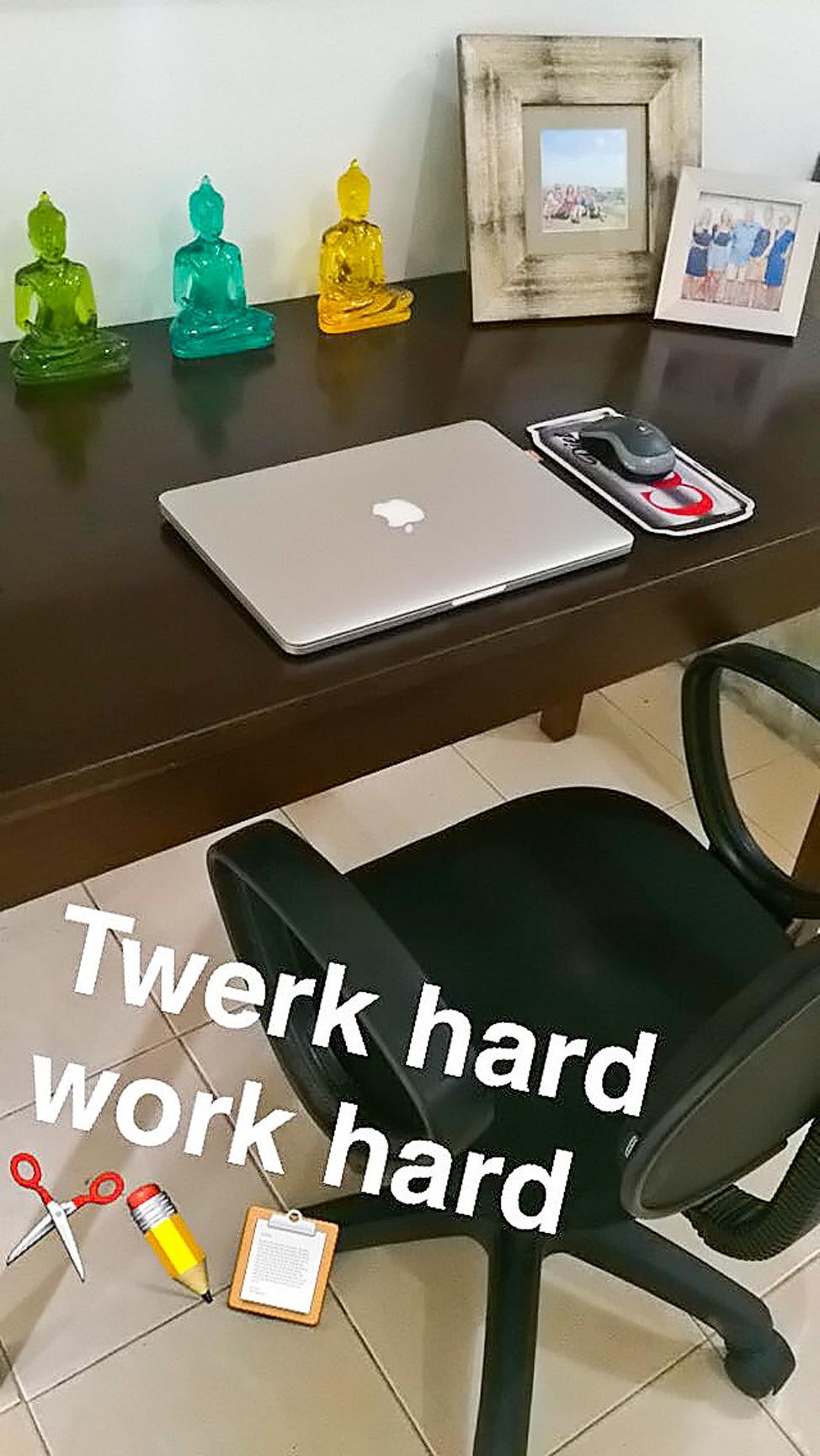 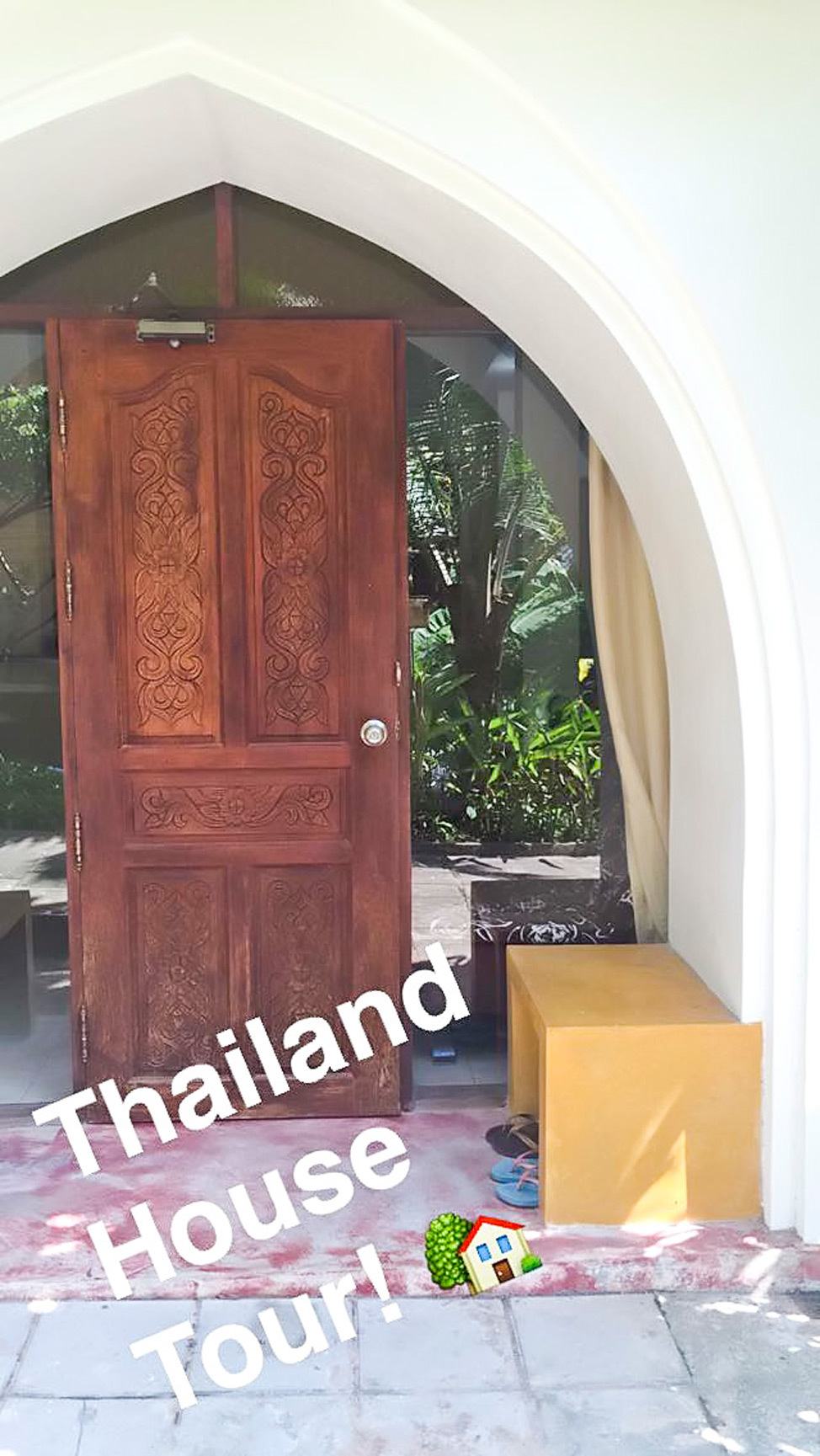 Want to get an even better feel for the place, and really see the depths to which my attempts at humor can fail? Watch the little tour I gave of the place on Snapchat upon moving in! I haven’t snapped in like a million years since this, but watching this again kind of made me want to get back in the social video game. Find me at @wanderlandalex if you want to see more spectacular emoji abuse such as this.

Want to see what other ends of the Koh Tao rent rage will buy you? Check out my posts on my $300 per month bungalow and my $600 per month luxury studio, too. I can’t wait to see where I land next!

What do you guys think of my cute little crash pad? Would you sign up for a stay?

Two Days in The Thai Jungle: Rafting from Pai to Mae Hong Son