A perpetual nomad allergic to leases but obsessed with real estate — it’s not an oxymoron; it’s me. Growing up my parents made a hobby out of attending open houses when we had no intention to move, and these days, from the moment I enter a new apartment I start plotting how to politely ask its inhabitant what they pay in rent (wine helps). What can I say? I’m fascinated by what money can buy in different parts of the world. Don’t even get me started on New York Magazine’s real estate section.

Hence this post — I figure I can’t be the only one out there curious to peek inside someone’s place on the other side of the world. In Koh Tao, I have heard of expats paying as little as 6-8,000 baht ($180-$245) a month in rent, but the cheapest I have ever personally paid was 10,000 baht (about $300). Years ago, I gave a little tour of one of those places. For my most recent return to Koh Tao, I splurged on a place for 20,000 baht (about $600), which is at the high end of what is available on the island. Considering I’ve now rented at both ends of the apartment price range, I thought it was time for a little compare and contrast. 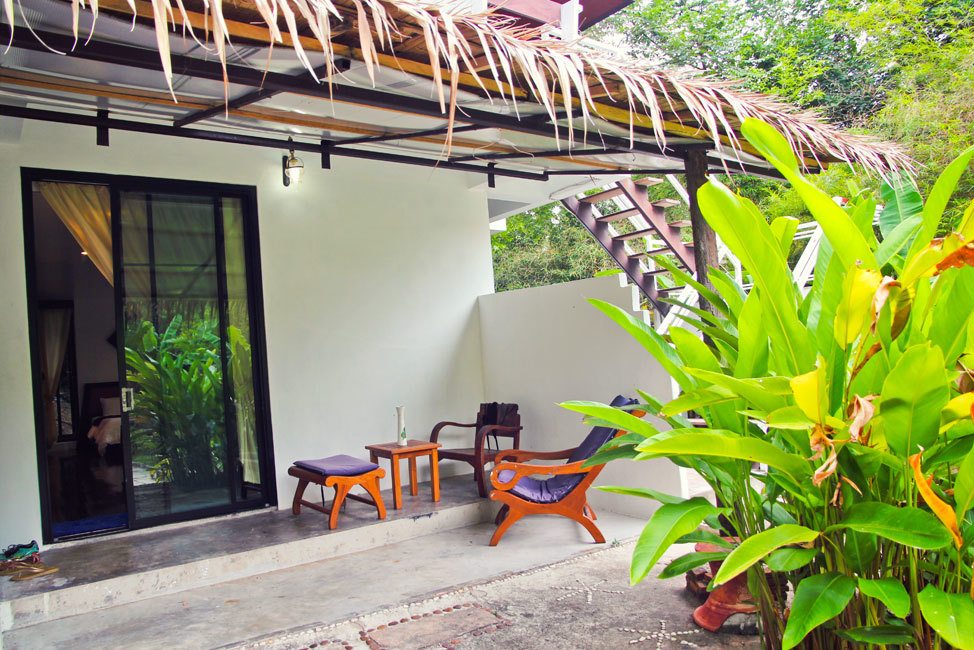 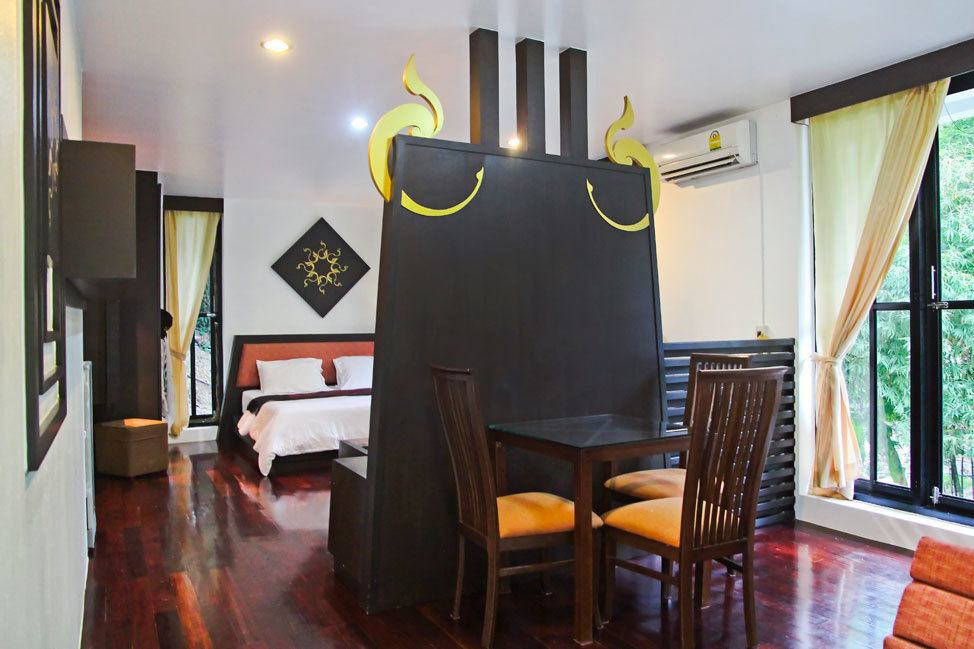 When I arrived back in Koh Tao the last week of August, I hit the ground running looking for a place to live and work for the next seven weeks. I needed decent wifi, I needed to feel comfortable driving there (no too-steep hills or bad roads) and I needed to feel comfortable sleeping there alone (nothing too remote for this scaredy-cat). I also wanted to be in Sairee, and I preferred to live alone despite the fact that it would be more expensive. And considering I’d be spending at least half my time inside working on my laptop, I was on the lookout for a place with a desk or simply a table and chair.

Then I saw an ad on Koh Tao Rooms for Rent for luxury apartment rentals in Sairee, and I couldn’t resist taking a look. I squirmed when I heard the price — though the room is typically 35,000 baht ($1,060) a month, the owners were eager to fill it for the low season and offered me 27,000 ($820). That price included everything — electricity, gas, hot water, air conditioning, cable, wifi, and a house clean and linen change once a week. Though I’m generally a terrible negotiator, I managed to get that to 20,000 ($600) a month with just a shy query. Like I said, they were eager to fill the room and encouraged by the fact that I was alone, and thus would be using up less utilities, I suppose. Right before low season is a great time to be looking for an apartment on Koh Tao! 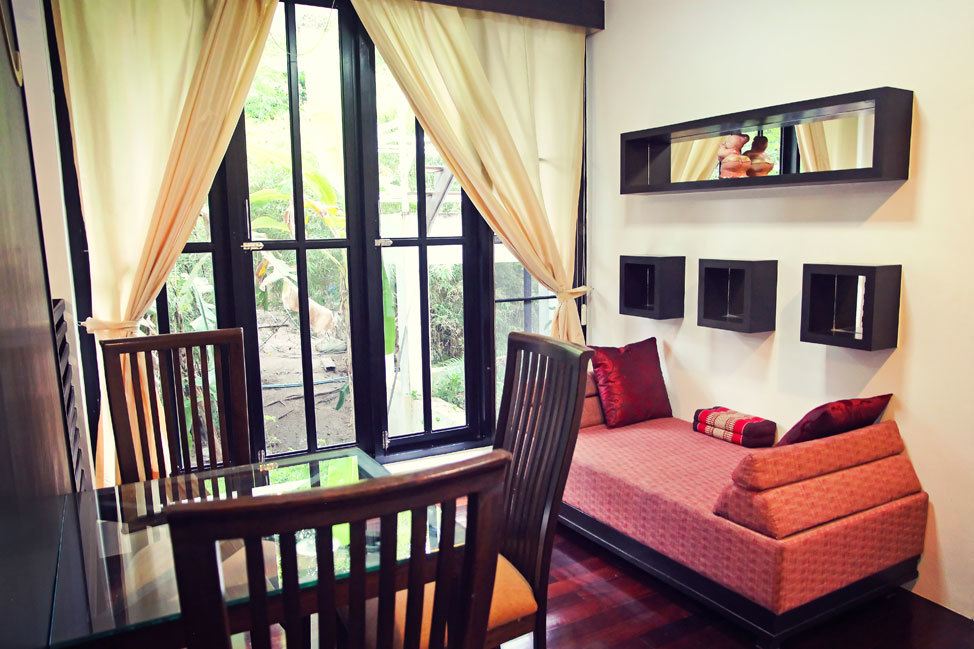 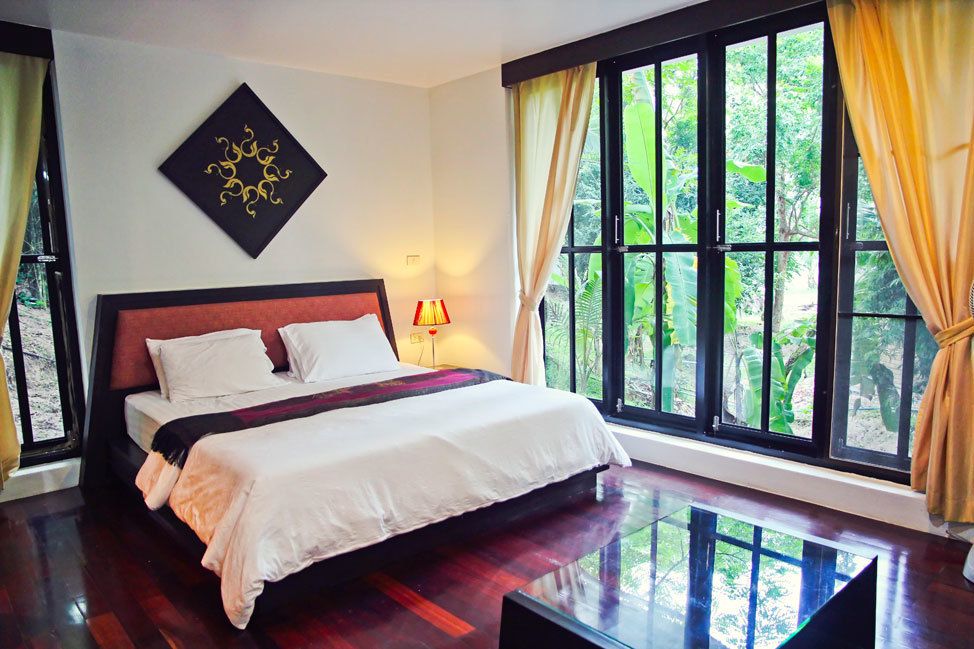 I fell wildly in love with this apartment. It had a full closet as well as a small vanity (to the left of the bed). It had not only a desk and office area (to the left of the TV), but a separate dining table too — meaning other friends who worked online could stop by and set up shop during the day, making it a great communal work space. Also meaning I was happiest working from home, and didn’t waste time and money by flitting from cafe to cafe all day. It also had a pretty great kitchen for Koh Tao. In addition to the usual mini fridge and hotplate it also had a kettle, a full set of dishware and a microwave, a rare luxury on the island which meant I could reheat leftovers with ease. And while I hadn’t thought I needed air conditioning — I’ve never lived with it before on the island — it really did come in handy when I was stuck inside working in the mid day heat. I was walking distance from my gym and yoga studio and a five minute drive to the beach — a five minute drive from almost anywhere I’d want to go, really.

There were some downsides. The wifi wasn’t the best connection on Koh Tao and the water pressure in the shower left something to be desired. I could also never get the DVD player to work, which was met with a shrug by the property manager. Also, at this price range a lot of people would hope for an ocean view, though I was fine giving that up in exchange for a pretty garden and flat ground (I have a serious phobia of driving up steep hills, which eliminates a lot of Koh Tao apartments). And then there was the issue of having premium cable that showed important international sports games in the middle of the night, which meant my football fan friends often came over to terrorize me at inconvenient hours (just kidding, I literally love hosting even at 2am). 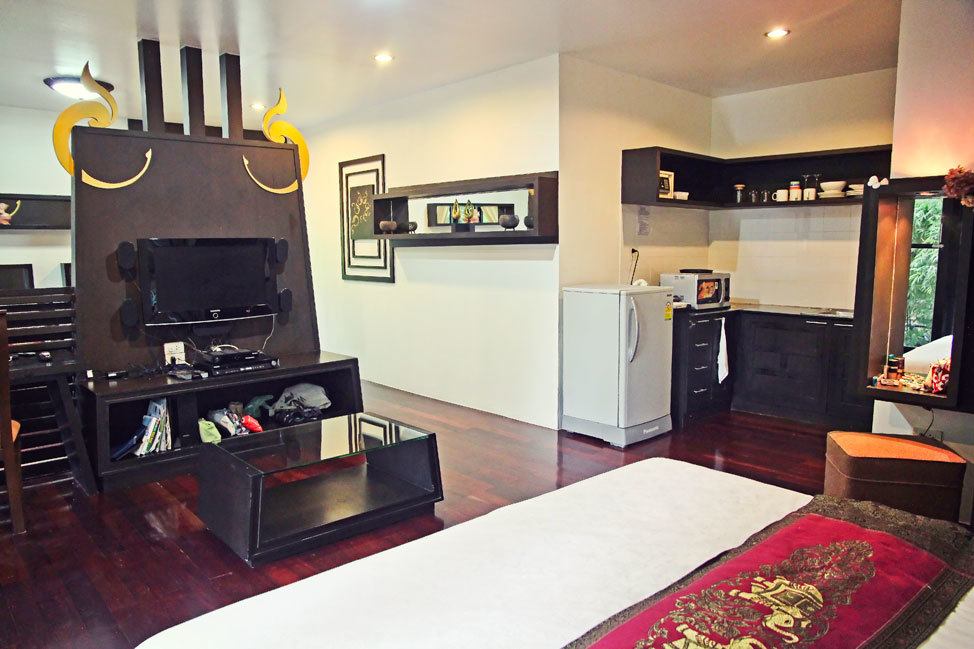 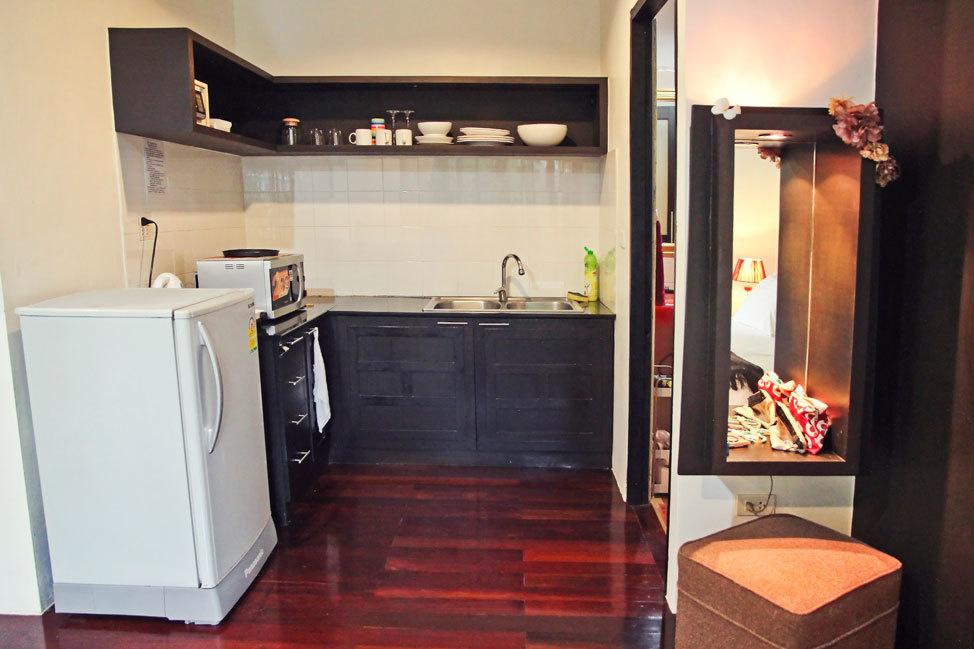 While I doubt I would commit to such an expensive place long term — I’d rather hunt for something great in the 15,000 baht range next time — for a limited period, this little studio was a killer home office and the perfect recharging retreat. It became a gathering place for my friends, too — it wasn’t rare for four or more to drop by throughout the day to work, to have lunch, to watch TV, to have a drink or just to say hi. While it was a huge splurge for me compared to what I’ve payed in the past on other islands and I went through bouts of feeling pretty indulgent and guilty about it, in the end, I really only spent $300 per month more than my lowest option would have cost me.

And it was money well spent. 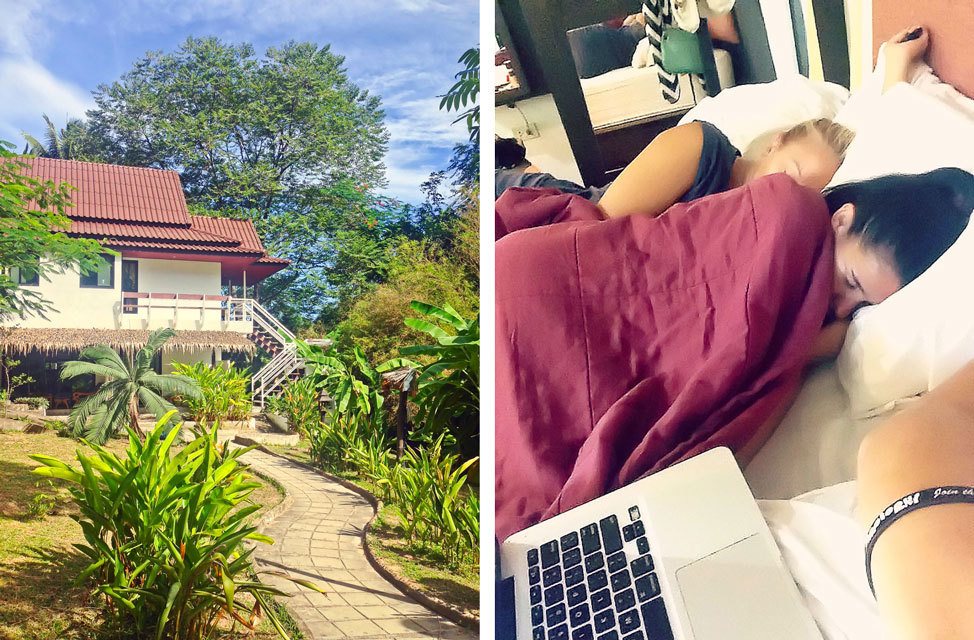 Hard at work at The Office 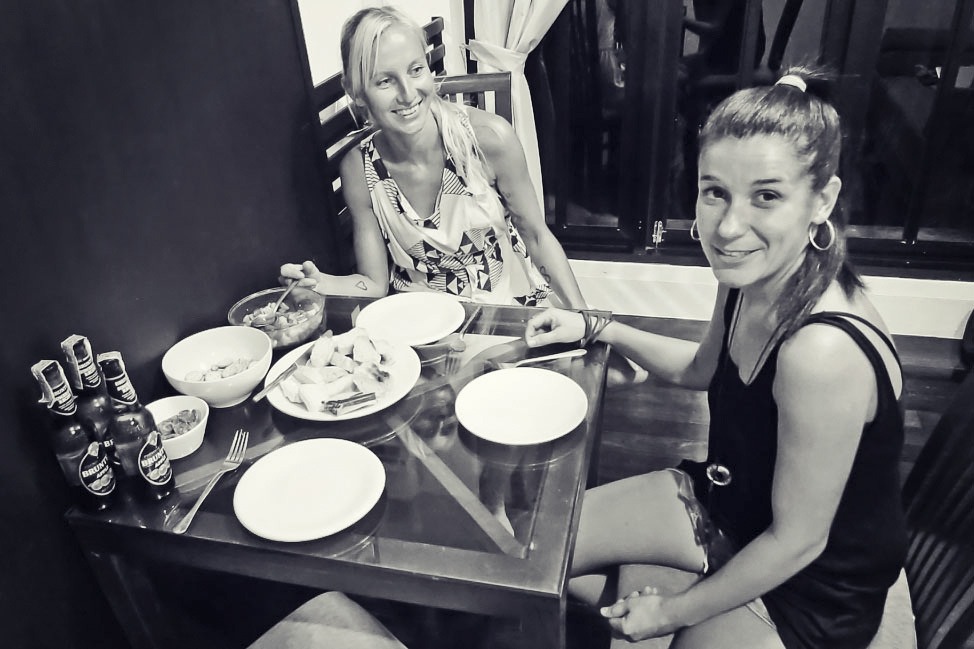 Girls over for an imported cider and cheese night 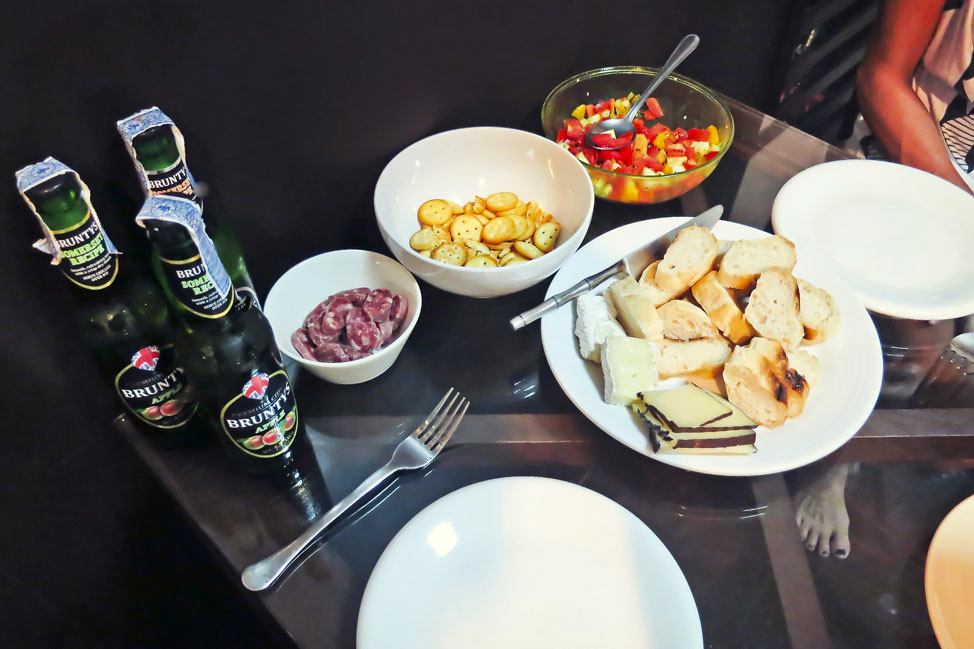 Did I mention the bottle opener built into the cabinetry? 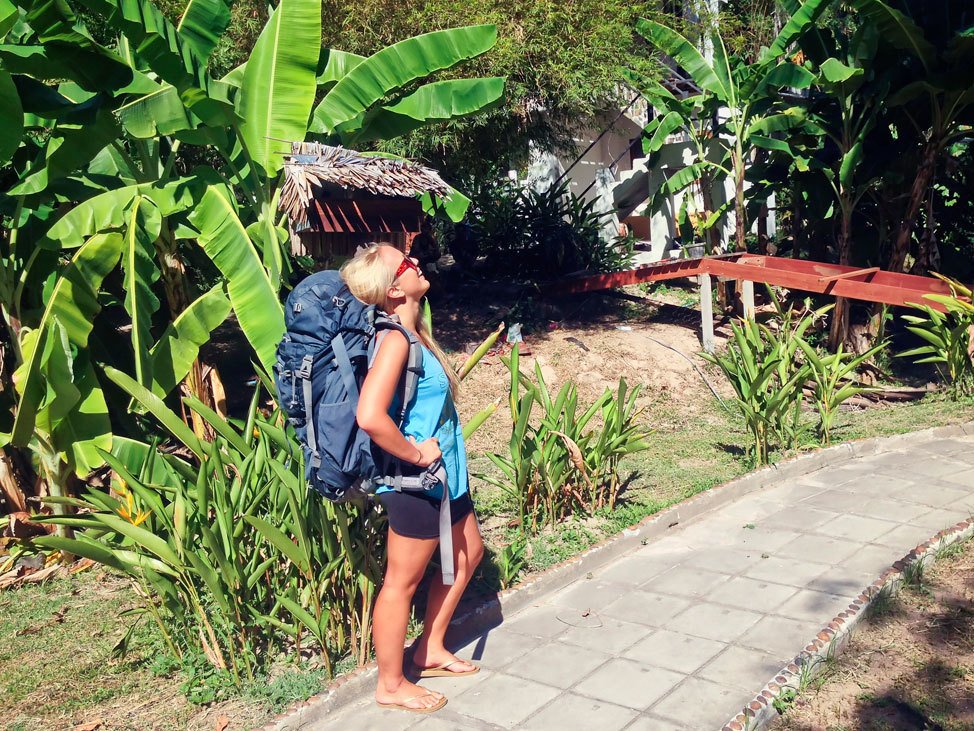 Goofing around in the garden

And considering I ended my last Koh Tao real estate post with a creature feature, I feel I’d be simply remiss if I didn’t share this photo I snapped just strides away from my front door. You can fancy up a studio apartment all you like — you’re still in the jungle out here, baby. 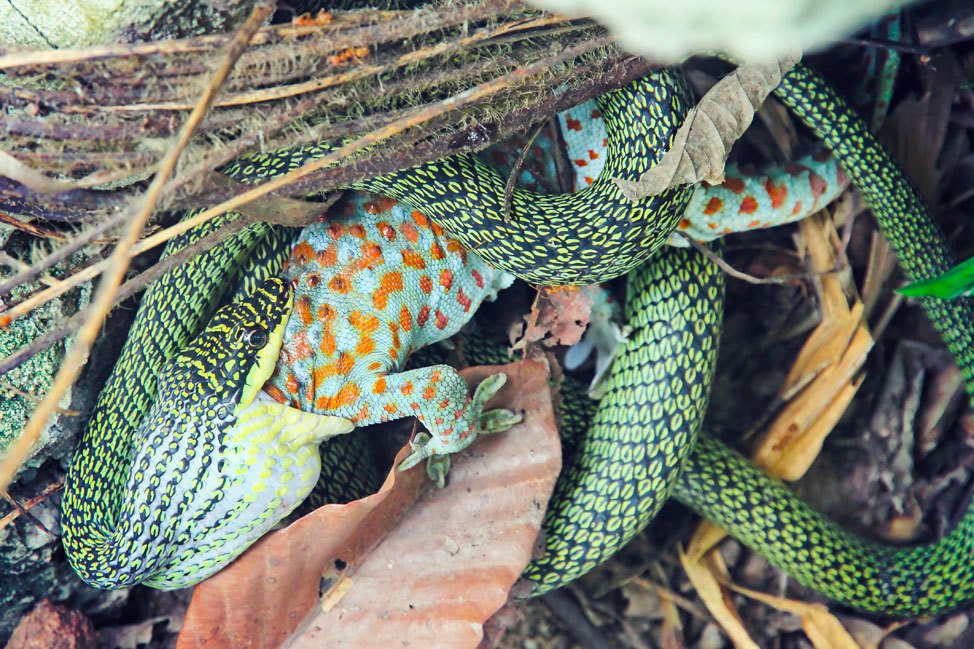 Looking for an apartment of your own on Koh Tao? Thailand travel guides are filled with hotel and hostel recommendations but have little insight into long term accommodation. Truth is, there’s no Craigslist and no real apartment brokers around here. My advice is to keep an eye on Koh Tao Rooms for Rent, ask local expats if they know of anything open, and simply take a drive around the island when you arrive and look for Room for Rent signs. I found this place on my second day of looking. It’s simple! Be aware that some landlords will only rent to those staying five months or longer — I was knocked back by my first choice due to my shorter length of stay. You’ll have the most options September through November, with selection doing down and prices going up starting in December.

What do you think, was it a worthwhile splurge? Any other intentionally-homeless,
real estate-obsessed nomads out there?

A Weekend of Beachfront Charm on Koh Phangan

Wine Not? Kicking off A Thailand Wine Weekend at GranMonte Vineyard